Multitools are awesome. Here’s a timeline to help you become even more of a knife and multitool aficionado than you no doubt already are.

Where It All Started

100-200 AD: They came, they saw, they conquered. And they had multitools. The ingenious ancient Roman who invented this multitool was probably named “MacGyvericus,” Wired quips. In addition to several sharp, pointed tools, it has a spoon. So it was likely an eating utensil as well. 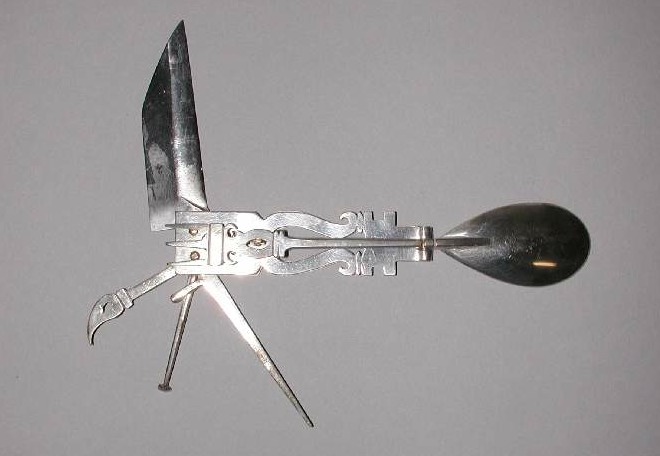 1851: Move over Moby Dick, and tell Captain Ahab the news. The little multitool—and the utilitarian resourcefulness it represents—are significant details in Herman Melville’s sprawling 1851 novel about a sea captain with a huge ego who is obsessed with hunting a great white whale.

Near the end of the book, narrator Ishmael describes the ship’s carpenter, his skill, and his work:

“He was like one of those unreasoning but still highly useful, multum in parvo, Sheffield contrivances, assuming the exterior—though a little swelled—of a common pocket knife; but containing, not only blades of various sizes, but also screw-drivers, cork-screws, tweezers, awls, pens, rulers, nail-filers, countersinkers.” 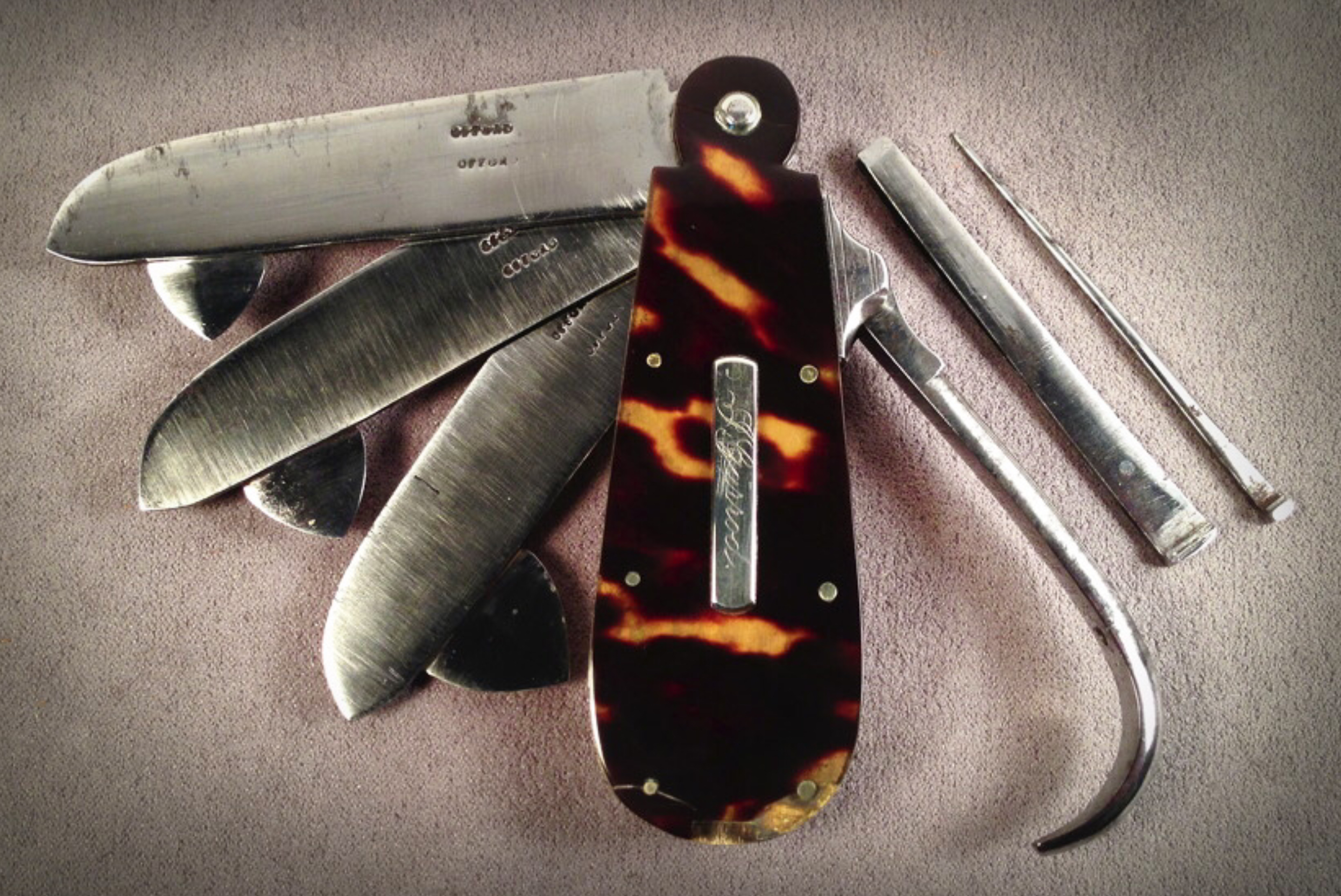 A “Sheffield contrivance” from the 1830s. (Image: Antiques I Collect)

A “Sheffield contrivance” refers to multitools manufactured in nineteenth-century England, precursors to the Swiss Army Knife. “Multum in parvo” is Latin for “much in little”—quite striking in a novel dominated by a big ego and a big whale.

Like the multitool, there’s much more to the carpenter than meets the eye. In fact, it’s the carpenter and his practical ingenuity that allow the Moby Dick to be told. When the white whale destroys the whaling ship and all the crew perish, only the ship’s narrator, Ishmael, floats to safety. His life buoy? An empty coffin the carpenter has fashioned. Practical handiwork is what makes great stories possible, one author observes.

1884: Karl Elsener opens a cutlery and surgical equipment workshop in Ibach-Schwyz, site of the Victorinox factory to this day. 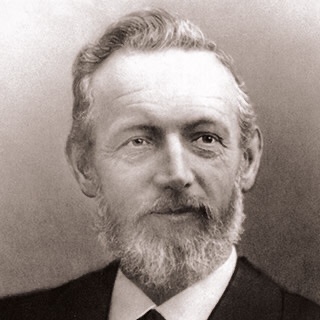 1890: The first multitools for the Swiss Army were produced by Wester & Co. in Solingen, Germany.

1891: Pointing out that a Swiss manufacturer should be the one to provide “Swiss Army Knives,” Karl Elsener makes a knife to compete with the German version.

1909: Elsener puts the Swiss coat of arms on his knives for the first time and renames his company after his mother, Victoria, who helped him launch his company during its early years.

1921: Victoria begins to use stainless steel for its knives. Elsener’s son renames the company Victorinox to allude to the new technology. (The French term for stainless steel is acier inoxydable.)

Image: The newly automated workshop in 1931 of Victorinox

1961: The Soldier Knife features a brass spacer that allows the knife, the screwdriver, and the reamer to remain extended at the same time. This set up makes it easier to assemble the SIG 550 and SIG 510 assault rifles. 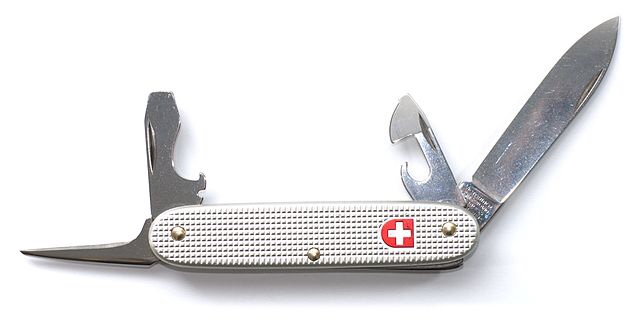 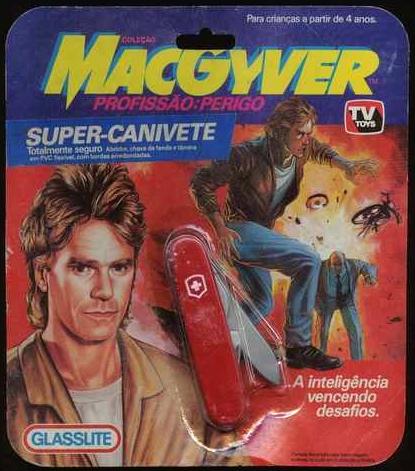 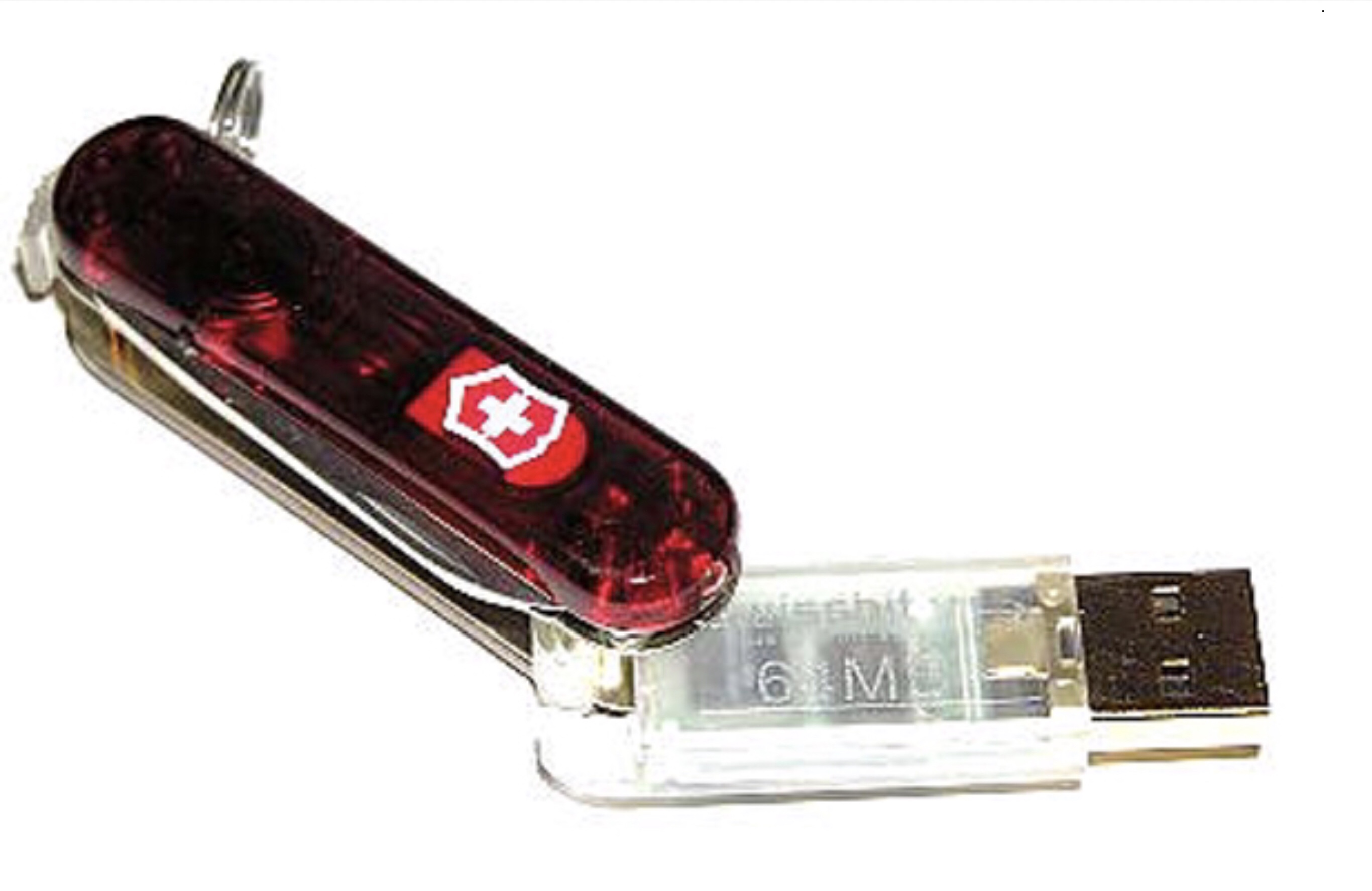 (Image: the-gadgeteer.com via The Atlantic)

2008: Victorinox reveals an insider view. This image of an “exploded” Swiss Army Knife is from the company’s 2008 catalog. 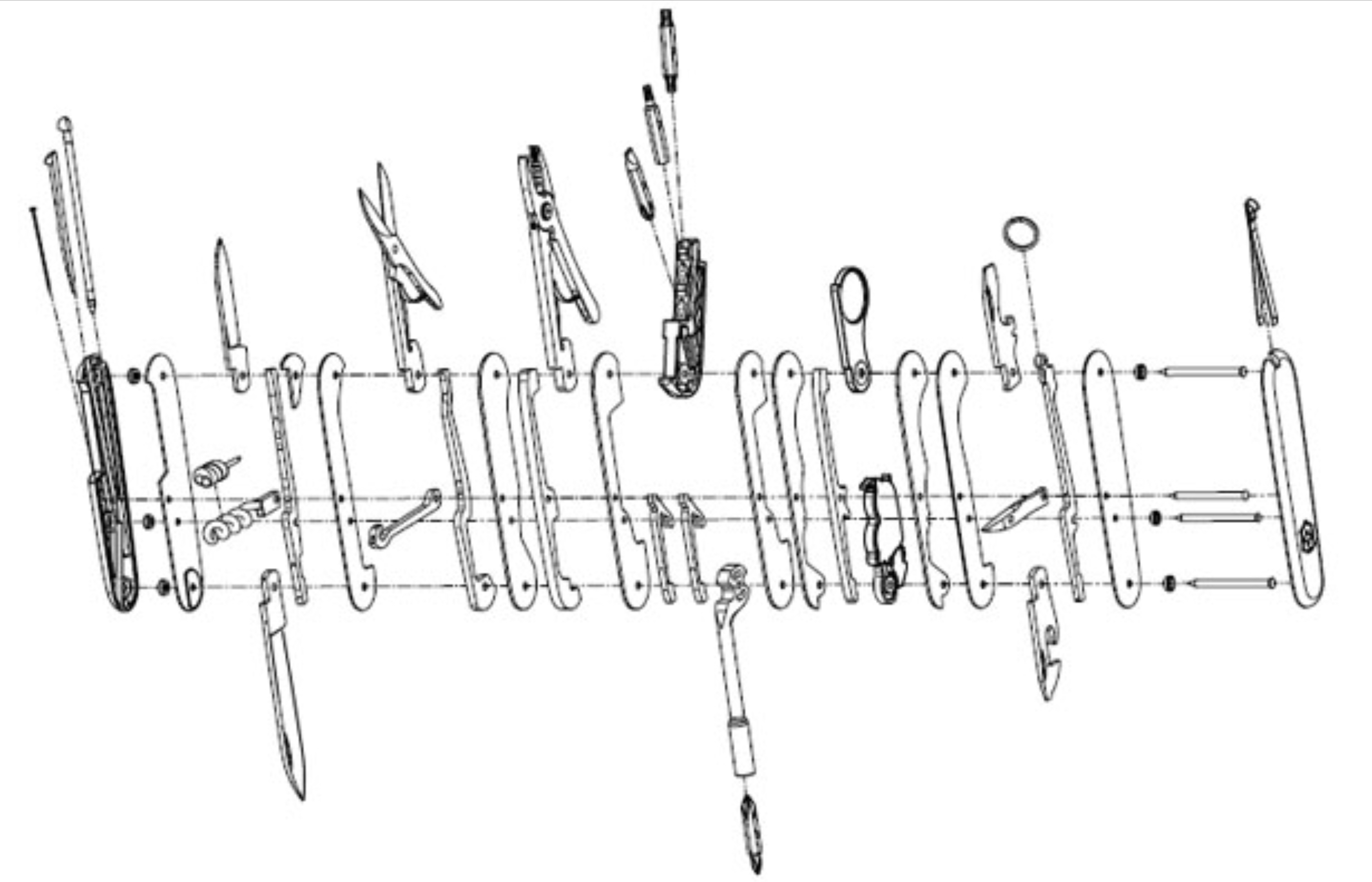 (Image: Victorinox via The Atlantic.)

Now: The Wenger 16999 (and its 87 tools) spark parody reviews on Amazon. Pour yourself a drink and enjoy it during a happy hour someday soon. Meanwhile, here are some of my favorite user-generated jokes. 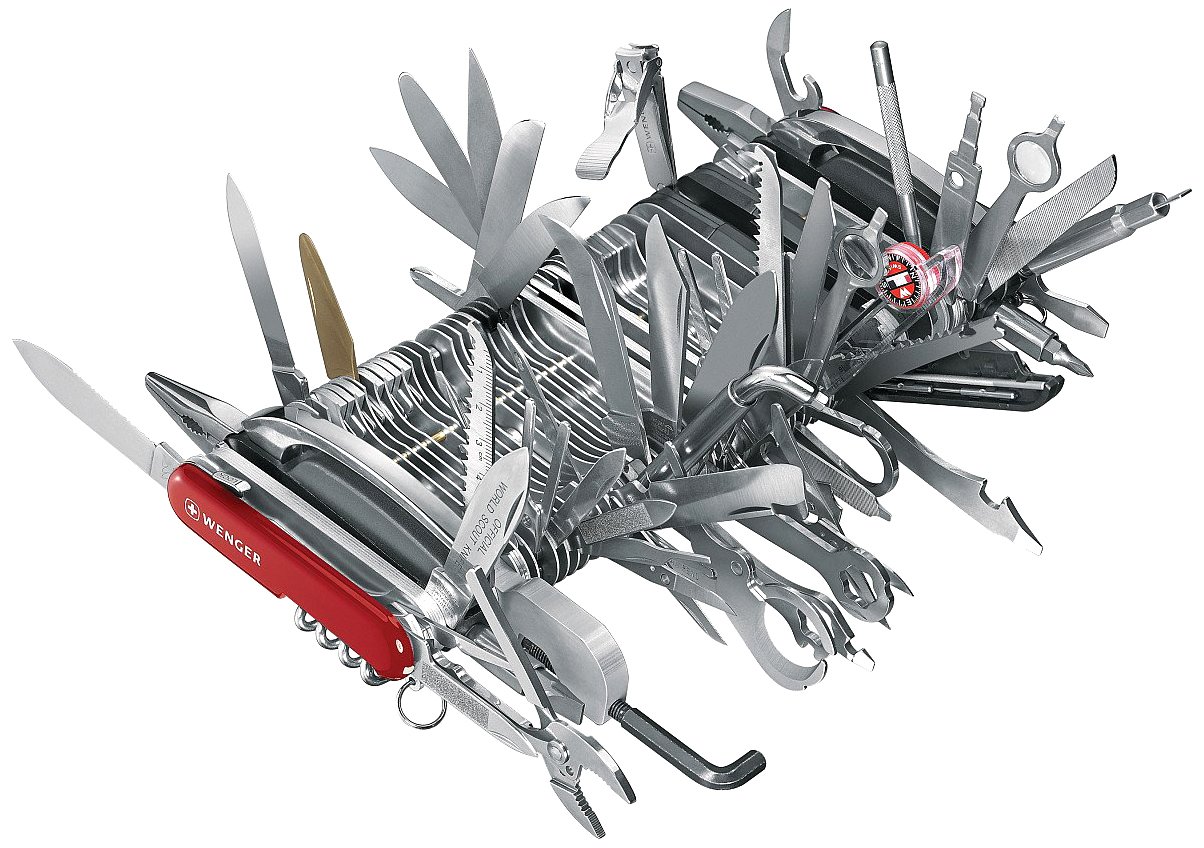 5 stars, “Surprising results.
I tried to file my nails, but in the process, I accidentally fixed a small engine that was nearby. Which was nice.”

5 stars, “Flew it to Vegas.
When I forgot to take it out of my backpack before trying to board my flight the helpful TSA agent at the security area pointed out that by deploying the two larger blades and the jet engine on the backside I really didn’t need a commercial flight, just a runway and some goggles. Boy, did I feel dumb, but I saved $605 on airfare!”

3 stars, “A couple pointers …
1. I have called off work and not left the house for ten days… Still can’t find the knife.
2. This knife isn’t balanced at the tang, not gonna be too good as a throwing knife.
3. The camera feature is pretty good, but its right next to the bidet and every time I use the bidet it shorts out from all the water and takes a bunch of pictures.
4. Function #420 makes me feel kinda strange ……” and … I’ll let you read the rest for yourself.

If you decide you want something less unwieldy and less parody-provoking, check out these cool multitools: this 7-function EDC, this 15-tool option, or this EvoGrip 15-tool choice. (These 3 suggestions are affiliate links. This means that if you click through and make a purchase, KI may receive a small commission at no extra cost to you! A very knife deal for both of us.)