Plus, 7 more nice-to-have knives for your kitchen.

You can never have too many knives. But if you must start with the basics in the kitchen, here’s what experts recommend.

We’re sharing our latest obsessions and we may earn a bit of coin from commission, should you make a purchase through one of these links, just so you know. We’re honest like that.

1Blades can range between 6 to 14 inches. When you choose your chef’s knife, you want to select a blade size that works with your hand size and feels comfortable. An 8- to 10-inch blade is the handiest and most versatile for most people. 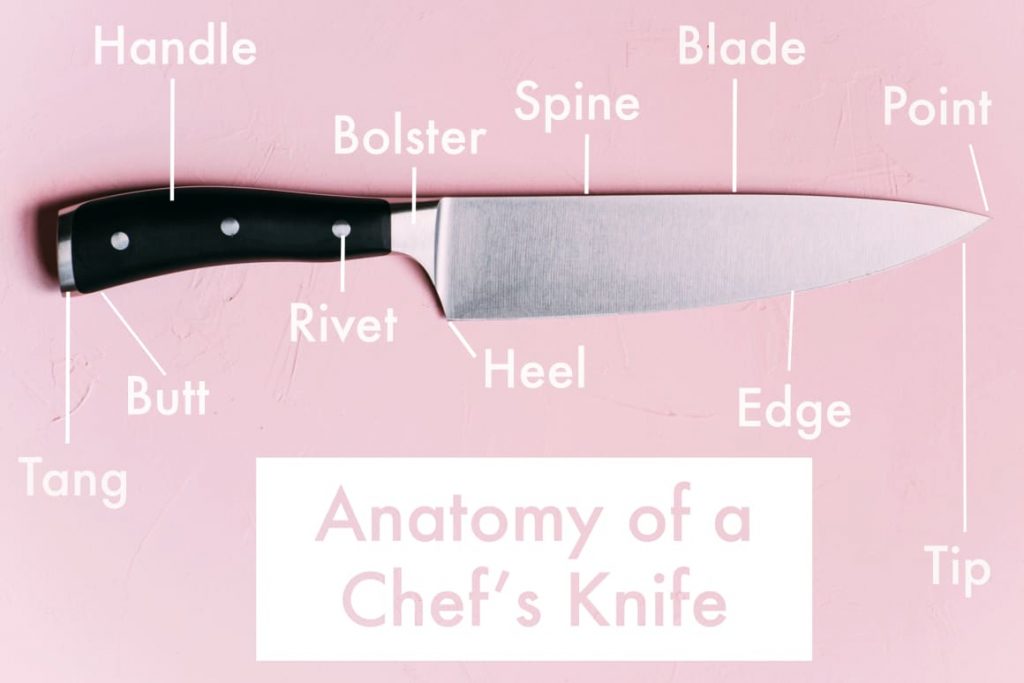 You can use the middle of the chef’s knife for most jobs, observes Sharon Franke. The sharp tip helps you do more delicate work, like mincing garlic. And you can use the knife’s heavy heel for bigger jobs like breaking apart a butternut squash. You can lay the blade flat and use its large surface for smashing garlic cloves or shallots. Once you’ve smashed them, you can peel away the skin and mince them more easily. Finally, you can use the spine as a makeshift “broom” to clear your work area of what you’ve already sliced, chopped, diced, or minced.

“If you’re only going to have one knife in your kitchen, it should be a chef’s knife,” says chef Adam Glick.

Here’s the one we’d suggest.

2Some people call it a “bread knife,” but it’s useful for much more than bread and cake. It’s especially useful for cutting into tomatoes and other foods that have thin, tough skins and soft insides. The scalloped edges are like teeth, which makes these knives great for grinding up hard, brittle foods like baking chocolate.

Serrated knives come in lots of sizes, but your first serrated knife should be around 10 inches so that it’s big enough for a nice loaf of crusty bread.

3 A great debate surrounds this little knife. Some cooks claim you don’t need it at all. It’s much too small to be useful, they say, and anything you’d want a paring knife for you can just as easily do with a good pair of kitchen shears (see below).

Other cooks disagree. “A paring knife if the most-used knife in my kitchen, period,” Elaheh Nozari declares on Bon Appetit’s site. It’s what’s you need for detail work like hulling strawberries, marking pastry dough, deveining shrimp, or removing seeds from a pepper. If you want to hold something in your hand while you work on it, a paring knife is a natural choice. Best of all, “I know that it’ll never chop my finger off. My beloved paring knife would never betray me,” Nozari adds.

Many experts advise against spending too much on a paring knife. Because of its small size, it’s easy to misplace. Many cooks say they love this one.

7 More Nice-To-Have Blades for Your Kitchen 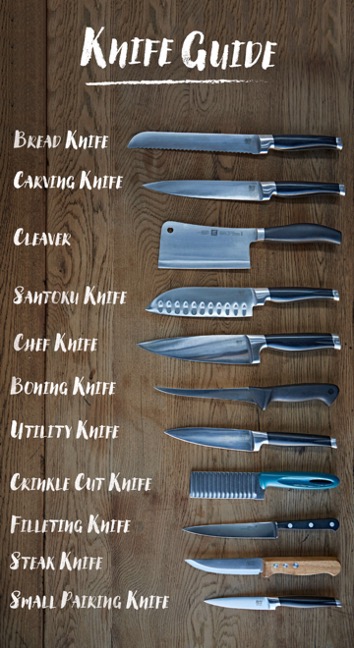 Once you’ve got the basics, it’s time to consider branching out. Here are some options.

1 “I never cut with a knife what I can cut with scissors,” quips chef Alton Brown. “After all, I’ve been using those things since kindergarten.” Choose the kind that come apart into two pieces.

I just bought these Henckels kitchen shears last fall. It was time to trade up from using some tiny blunt scissors one of my boys had used in grade school. I love my new shears. They’re small enough to cut fresh herbs easily, but strong enough to trim away raw chicken fat. You can get your own here!

2 This blade has been on my husband’s wish list for a while, and not just because it looks good. You can use it for raw meat, of course, especially if you often buy whole chickens and cut them apart. (That’s much cheaper than buying pre-cut selections from your butcher.)

You can also use a cleaver to whack apart large, raw squashes or unwieldy fruits with hard rinds—watermelon, coconut, or cantaloupe, for example. Turn it on its side and it’s an instant garlic crusher.

Add this one to your kitchen knife collection.

3 “Most knives are designed to cut straight lines,” chef Brendan McDermott tells Epicurious. “But when it comes to anything with a ribcage and joints, there is no such thing as a straight line in the body, so you need a blade that can move and flex.”

The boning knife’s thin, flexible blade does just that. As with the cleaver, this knife is most useful if you routinely butcher your own large cuts of meat into smaller cuts.

Check out this badass boning knife from Dalstrong.

4 This knife is closely related to the boning knife, and the two can sometimes be used interchangeably. Filleting knives are even thinner and more flexible than boning knives, and their curved tips are designed for long cuts.

We’d recommend this 7-inch flexible fillet knife from Dalstrong’s Gladiator collection. You can get it here!

Watch Chef Jamie Oliver fillet a salmon here. Notice how he deploys his handy kitchen shears to remove the fins.

5 While not absolutely essential, a utility knife is nice to have for those “middle of the road” kitchen jobs like cutting large hunks of cheese or slicing citrus. It’s sized halfway between a chef’s knife and a paring knife.

This one will be perfect to get the job done!

Santoku knives first appeared in Japan after World War II, and were meant to be a modern alternative to the nakiri, a traditional Japanese cleaver.

Check this one out! It comes in two different sizes and was designed in collaboration with professional chefs.

7Nice to have, but admit it, if you’re a dedicated Knives Illustrated reader, you probably whip out your own personal carry in steak restaurants because it’s far superior to anything the establishment offers you, right?

If you’re looking for a nice wedding gift for someone who’s not the knives aficionado you are, or, if you want to serve others who aren’t carrying, I have some Cutco steak knives that I love.

As an Amazon Associate, Knives Illustrated earns from qualifying purchases.

??Check out our other cooking-related stories on Knives Illustrated!