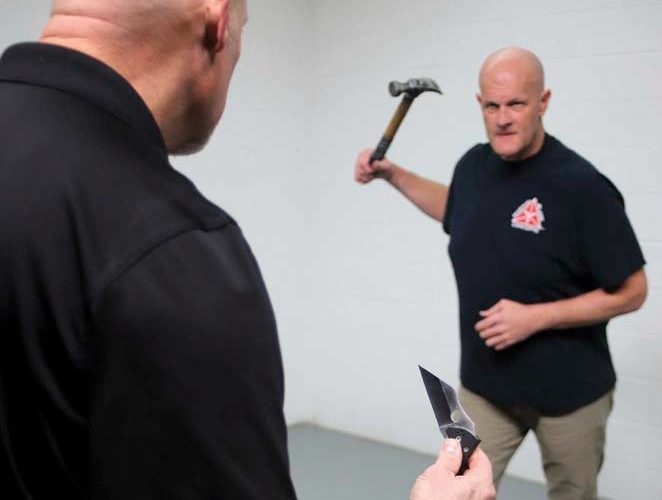 Your knife’s lock mechanism and the mass of the blade also have a lot to do with the ease with which it can be opened inertially.

Below are a few of the more typical styles of EDC folders locks.

Lockback: The lockback style of lock consists of a spring-tensioned rocker arm with a notch (or hook) on the underside, at the blade. The blade also has a notch that is meant to catch
the rocker’s notch.

Liner Lock: The liner lock acts as an extension of the tang by sliding into place behind the tang when the knife is opened. Once in place, the liner lock creates pressure against the tang of the blade, preventing it from closing.

To close a liner lock, simply use your thumb to move the liner lock back to the side and out of the way of the closing blade. This makes it easier for one-handed closing.

Frame Lock: The frame lock—also called the Chris Reeve Integral Lock after its developer, Chris Reeve—acts almost exactly like a liner lock, except that instead of using a separate piece of steel, or “spring,” as it is often called, it utilizes the frame, itself, to lock behind the tang of the blade.

This provides more strength behind the tang but can sometimes be a little harder to release one handed if the frame is stiff.

Compression Lock: The compression lock was developed and patented by Spyderco and utilizes a leaf-like spring from a split liner located on the spine of the handle.

When the knife is opened, the leaf spring wedges laterally between a ramp on the blade tang and the stop pin. This type of mechanism makes one-handed closing very simple and provides extreme strength while locked.

AXIS Lock: The AXIS lock was created by Benchmade and uses a spring-tensioned, button-like mechanism that almost resembles the button you would see on an automatic knife.

However, with an AXIS lock, the button has a bar that goes all the way through the handle. When the knife is in the open position, the button slides forward, placing the bar over the top of a flattened portion on the tang of the blade, thereby preventing it from closing.

To close the AXIS lock, simply pull back on the button, which removes the bar from the top of the tang of the blade.

For more excellent EDC lists and stories, check out our other EDC articles here.

What is your MUST-HAVE EDC item? Let us know in the comments!