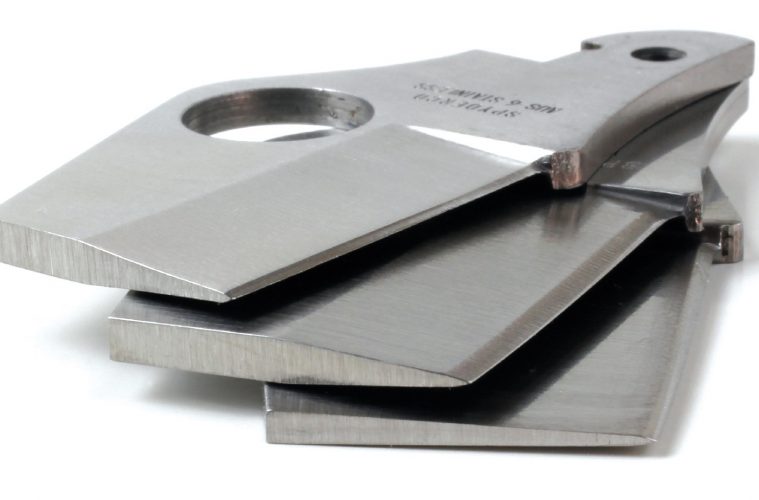 A Beginner’s Look at Blade Grinds

Knife edge Geometry 101: Sure, you’re familiar with the term “edge geometry,” but do you really know all the angles?

Text and Photos by Michael Janich 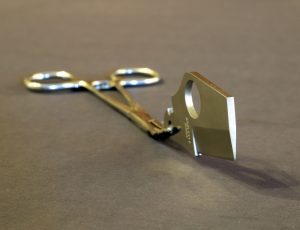 The saber grind is a partial flat grind. It offers great strength, but cuts with more friction than other grinds.

But first, let’s dig down into the basics. Edge geometry is the cross-sectional shape of a knife’s blade. If you were to take a knife blade, cut it in half along the middle, and look at one of the cut ends, you’d discover these shapes and angles.

Primary Bevel: The blade’s taper from its full thickness down to its thinnest part nearest the cutting edge. Also called the grind, primary bevels may be flat, concave (“hollow”), or convex. They may extend all the way from the cutting edge to the back (or “spine”) of the blade or only partway. Bevels that extend across the entire width of the blade are “full” grinds, while bevels that are narrower than the blade’s width are “partial” grinds.

Edge Bevel: Sometimes also called a “secondary” bevel, this is a narrow, second bevel that creates the knife’s actual cutting edge. In most knives, the edge bevel is clearly defined; however, in some blade grinds, the primary bevel and the edge bevel flow together into a single plane or convex arc.

Double Bevel: Most knife blades are ground symmetrically on both sides to create a “double bevel.” When you view these blades as cross-sections, they’re shaped like a tall letter “V.” It’s possible to grind only one side of a blade to create a single-bevel or “chisel-ground” blade, but let’s stick with the basics and focus on the more common double-beveled blades for now.

Blade Thickness: The thickness of the blade itself, measured at the spine.

Edge Thickness: The thickness of the blade at the transition from the primary bevel to the secondary bevel. 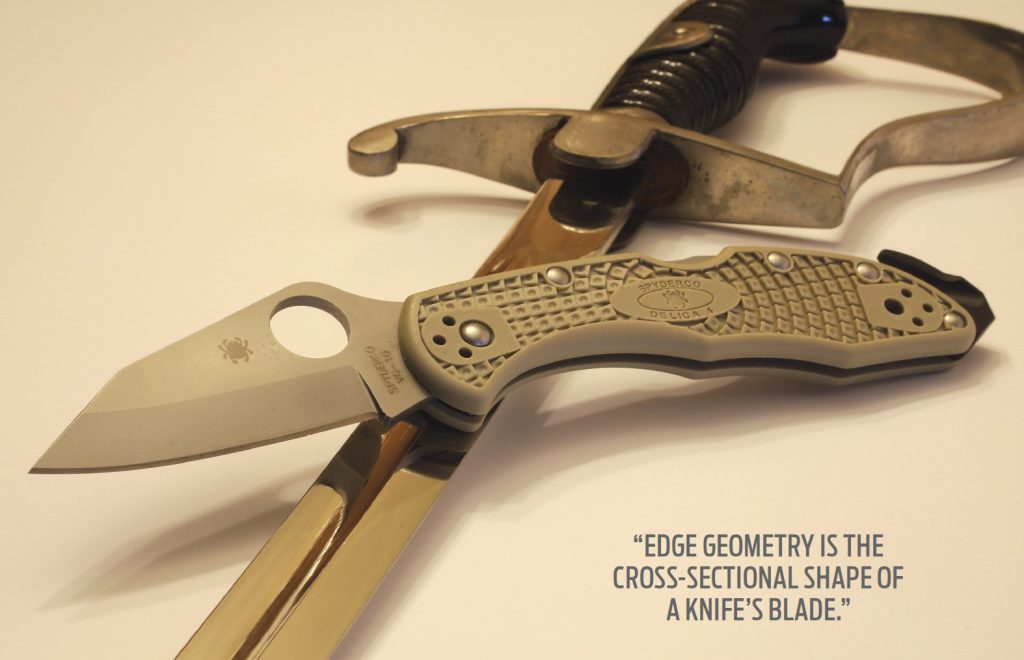 The saber grind gets its name because many sabers use partial flat grinds with strong, thick spines.

Putting the Blades to Work

Now that we have some basic terminology to work with, let’s go back to the blade’s cross-sectional dimensions. Again, the best way to understand that is to imagine cutting a blade in half and examining the flat, two-dimensional surface of the cut end.

First, imagine the raw bar of steel from which a blade is made. The cross-section of that bar is a tall, vertical rectangle. If you grind away the bottom portion of each side of that rectangle, you create the basic “V” shape of a knife blade. That is exactly what the primary bevels do.

The Scandi (short for Scandinavian) grind is similar to a saber grind, but the primary bevels are usually shorter “zero ground.”

The taller the primary bevels are, the taller and thinner the “V” shape of the blade’s cross-section is. That reduces the blade’s friction because it causes a “wedging” action as it cuts through something gradually. A typical chef’s knife, with its wide blade and long, flat bevels, exemplifies this concept. Its full-flat grind excels at low-friction slicing; however, the trade-off is that the more steel you remove from a blade, the weaker it becomes.

A bushcraft knife typically also has flat-ground bevels; however, they do not extend the full width of the blade. That means that the “V” they create is shorter and wider, the angle of the cutting edge is more obtuse, and the entire upper portion of the blade is as thick as the spine. These characteristics make the blade much stronger and its cutting action very different. While it parts materials very aggressively, it requires significantly more force to do so. Interestingly, the primary bevels of bushcraft knives usually converge at the cutting edge without a secondary bevel. This “zero-ground” version of a partial flat grind is known as a “Scandi” (short for “Scandinavian”) grind.

When considering various grinds and edge geometries, you must also bear in mind the importance of edge thickness. Again, this is the blade’s thickness at the transition point between the secondary bevel — the actual cutting edge — and the primary bevel. The thicker the blade is at this point, the more initial resistance the cutting edge will experience. Also, although the blade’s structure is stronger, as it is sharpened again and again, the secondary bevel gradually moves up into the thicker section of the blade. Over time, the secondary bevel gets wider, the angle of the sharpened edge gets more obtuse, and the blade cuts less effectively.

One way to avoid this problem and ensure a long service life is to use a hollow grind. The concave shape of the primary bevels on a hollow grind can keep the edge thickness minimal. Executed properly, the areas of the primary bevels closest to the edge will run parallel before meeting the secondary bevels. Even with repeated sharpening, the edge thickness will remain thin and the knife will cut with minimal resistance. 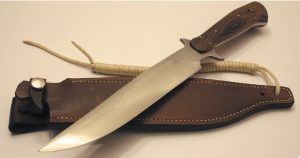 A convex grind is strong and sharp, but requires a special sharpening technique.

On the other side of the spectrum from the concave bevels of the hollow grind is the convex grind — also known as an “appleseed,” “Moran” (after the legendary custom knifemaker Bill Moran), or “hamaguri” grind. Rather than two flat, intersecting planes, the convex grind’s primary bevel gradually curves down to the cutting edge without a discernable secondary bevel. This grind creates a very sharp edge that “bites” aggressively into material. Yet it’s backed by plenty of steel for a very strong structure. Well-ground convex edges cut with minimal friction; however, they require specialized sharpening techniques to maintain their convex shape.

Which Grind is Best?

Like blade steels, there is no one “best” grind for a knife. But, with a basic knowledge of knife edge geometry, you can select a knife for the job at hand. So when you go knife buying or to have a knife designed, you’ll know what edge to ask for. It all comes down to the knife’s purpose.

Don’t miss our next print issue when we’ll continue our Knives 101 series with our article on blade points!