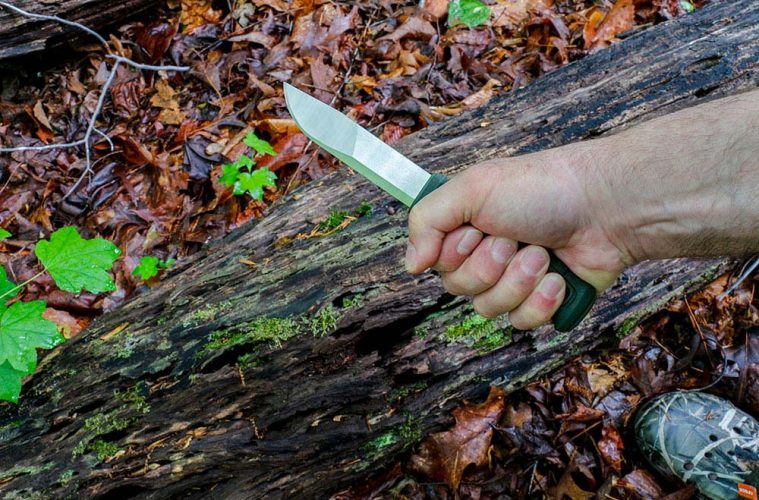 A GOOD START WITH MORAKNIV KANSBOL

WHEN YOU LOAD YOUR PACK, START WITH A MORAKNIV KANSBOL

Grab it and go. That’s a feature I like in my outdoor gear. It’s not because I’m expecting to have to evacuate my home on a moment’s notice. I’m fortunate to live in an area where natural and human-made threats are very limited.

But I’m not a person who often plans his activities well in advance. If I decide on an impulse to go on a hike or do an overnight in the woods, I don’t want to spend half the day going over a mental checklist and gathering the gear I need.

For that reason I keep several outdoor kits ready—or nearly ready—to go. I have kits in a waist pack, shoulder sack, lumbar pack, daypack, and larger ruck outfitted with basic gear. I just add food and water and I’m set.

“…if you need some finesse to make what you need, this knife can handle it…if you’re struggling to survive unexpected circumstances.” 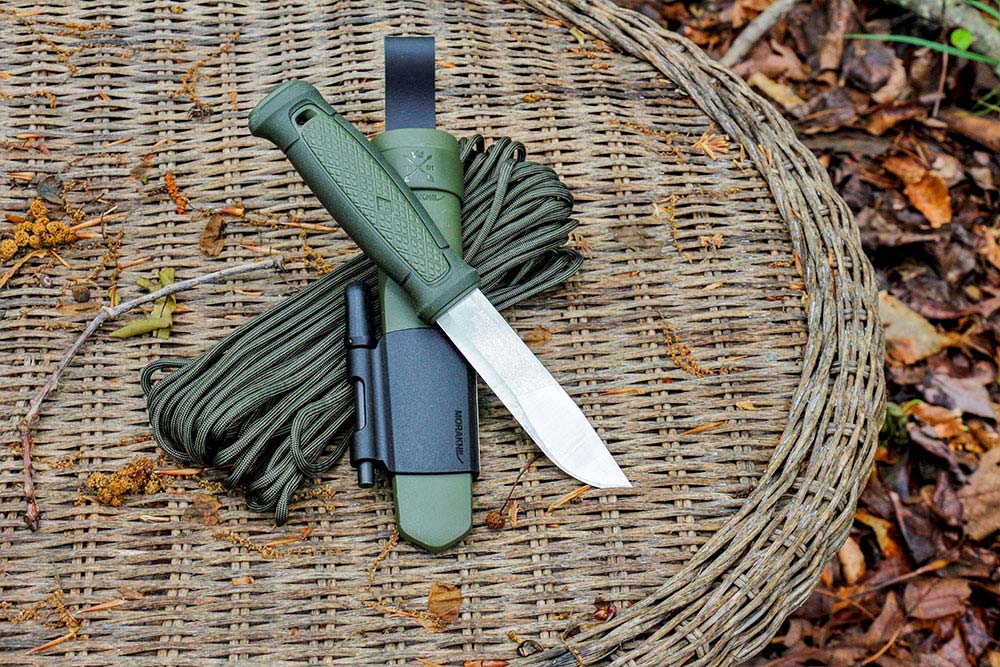 The Morakniv Kansbol with Survival Kit is an affordable, bushcraft/hunting blade with a sheath that features a sharpener and fire steel.

I’m not normally a TV-VCR-phonograph type of guy who gravitates to combined-use gizmos. But for my smaller kits—the waist pack and shoulder sack especially—I’m apt to make some concessions for weight and space considerations.

Recently, I’ve been using the Morakniv Kansbol with Survival Kit and I really like it. Morakniv is well known in the bushcraft community for making very sharp and very affordable thin-bladed knives.

The Kansbol with Survival Kit is actually one of the company’s more expensive knives with a suggested retail price of $71.99. If you’re a smart shopper, however, you can slice quite a bit off that price. Even so, this knife is a bargain when you compare it to what else is out there. 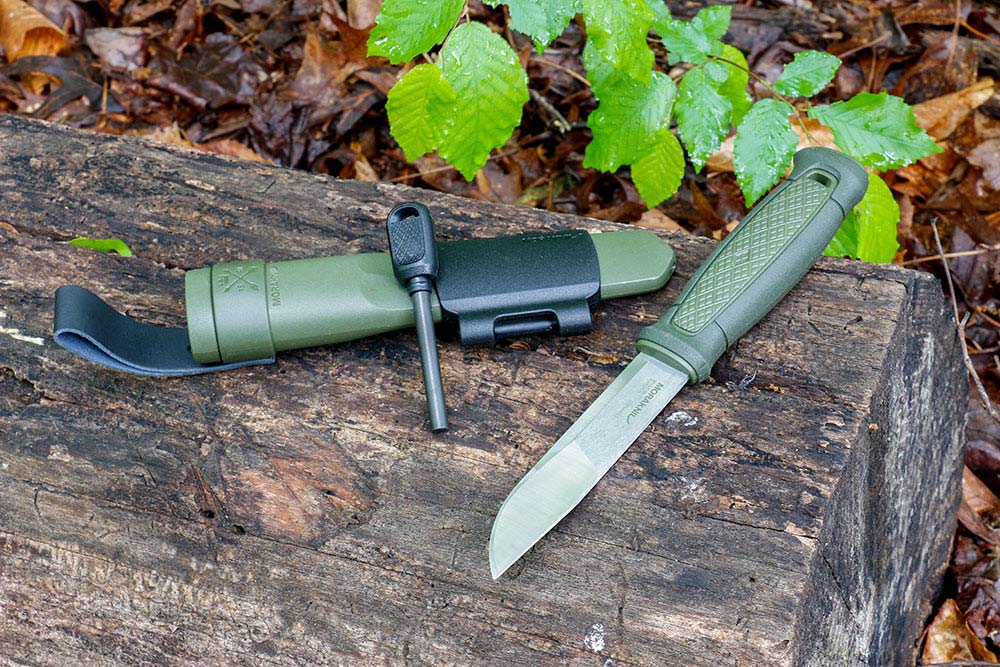 The included ferro rod is a great fire-starter, capable of making hundreds of fires. It snaps into loops on the sheath, so you’ll always have it with you.

This model is Morakniv’s Kansbol fixed blade with a sleeve that fits over the sheath. That sleeve features a diamond knife sharpener on one side and a ferrocerium (ferro) rod loop on the other. A ferro rod (fire steel) is included.

If you have one of the Kansbol or Garberg models that did not come with the survival kit, the kit can be purchased separately for about $27.

OK, the Kansbol with Survival Kit doesn’t have everything you might need in a survival situation, but it’s a good start. My packs always include at a minimum: a knife, lighter, tinder, compass, emergency poncho, steel cup, water container, and usually a water filter or purification device. 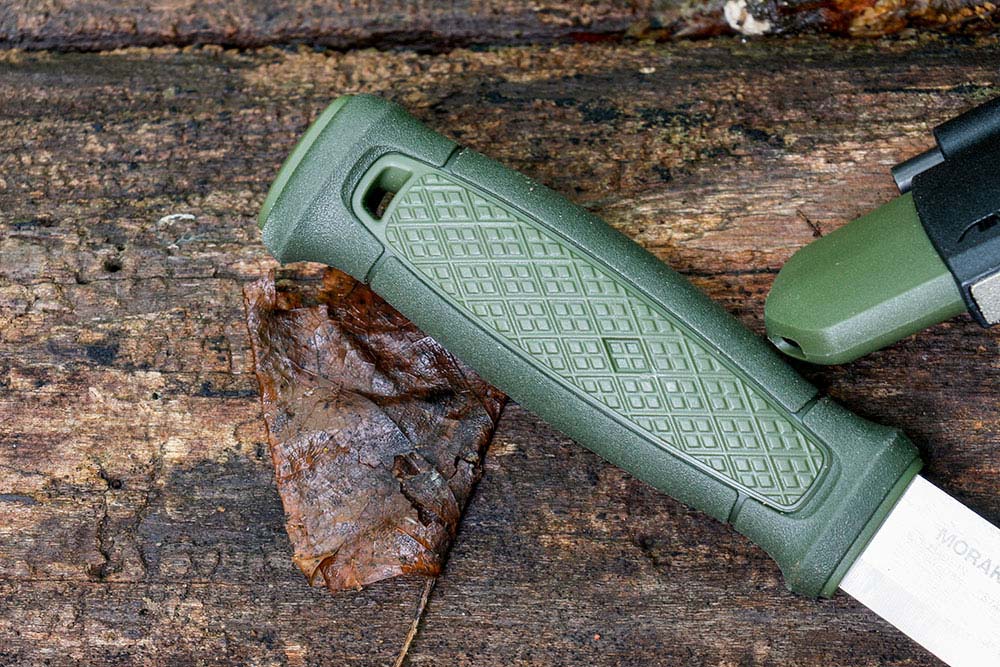 The grippy TPE handle on the Kansbol would be especially secure when working around water, in stormy conditions, or when processing game.

Having a ferro rod on the sheath is a good idea. Lighters are handy, but they can be broken or malfunction. I like to carry a ferro rod as an additional fire-starting device and often use one to light a homemade alcohol stove. I can get hundreds of fires from a single ferro rod.

On most hikes or camping trips, I usually don’t need to sharpen my blades. However, a twisted knee, sprained ankle, or wrong turn can turn a daytime jaunt into an overnight ordeal. That could heap more demands on the knife I carry if I need to build a shelter or fashion a crutch or travois. Having the ability to keep the blade sharp is a good idea. 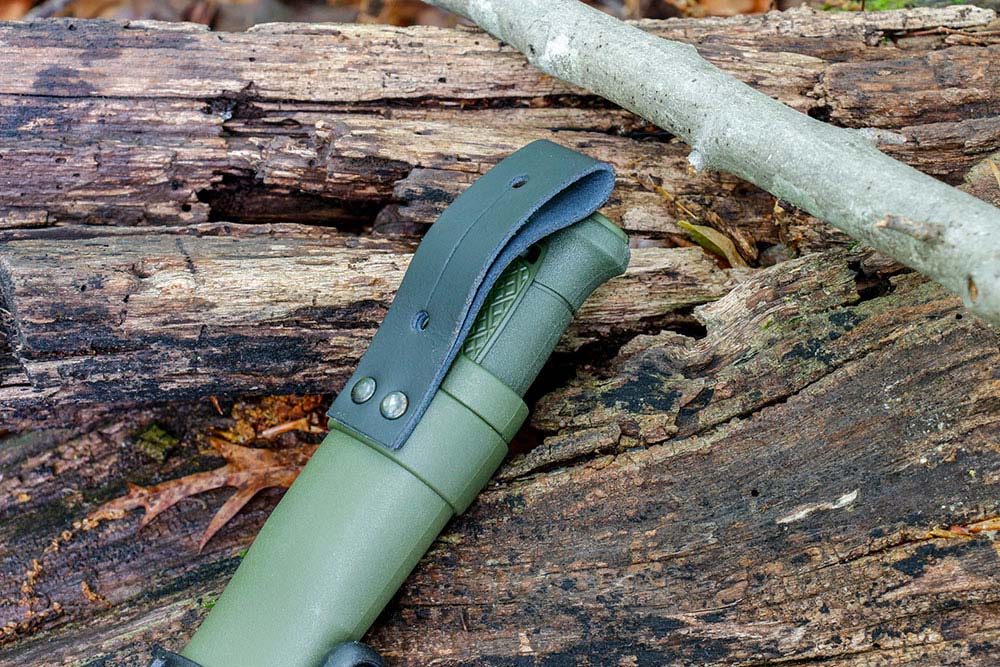 The sheath attaches to a belt or pack with a flexible leather loop.

The Kansbol measures 8.75 inches overall. About 4.29 inches of that make up the sharpened blade. In true Morakniv fashion, that blade is thinner than many knives this size at just 0.098 inch thick. It’s made of recycled Swedish stainless steel.

The barrel-style handle is a bit wider in the middle to fill the palm and offers plenty of room for even the largest hands. It’s made of rubbery TPE with diamond-pattern checkering for texture on the sides. It features a slight finger guard at the front—enough for most uses—and a pommel at the rear. There’s a lanyard hole, too, if you want to make use of that. 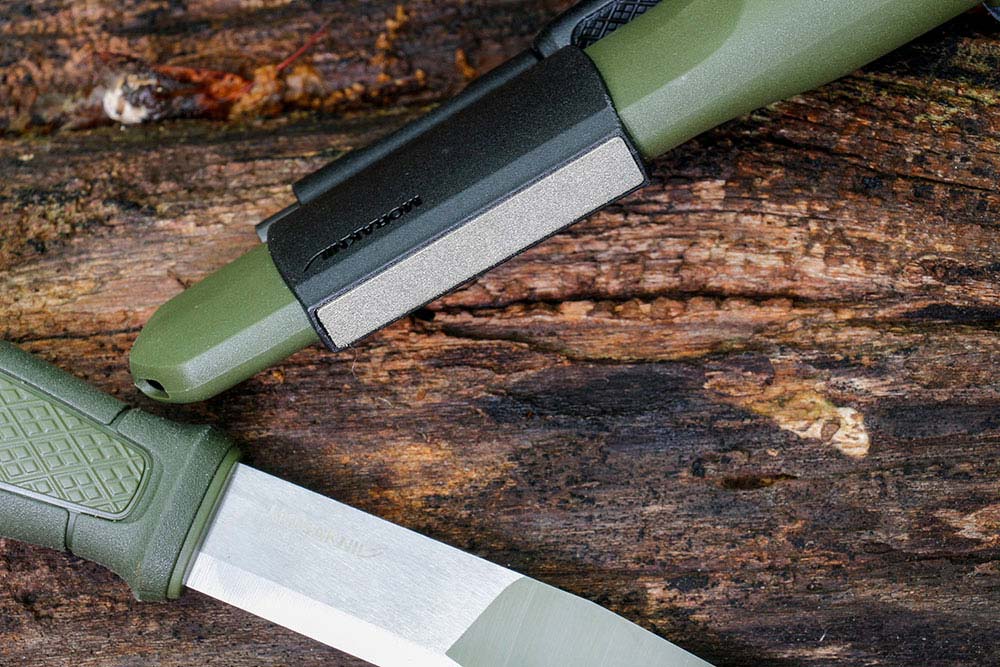 A diamond knife sharpener is included on one side of the sheath’s “survival kit” sleeve and is good for quick edge touchups in the field.

The polymer sheath features two drain holes to keep moisture and debris from building up in it. The flexible leather belt loop is secured to one side without the option of moving it, but you won’t have to. The knife will fit the sheath with the blade facing either way, so you can position it for right- or left-side carry on the belt.

Also, the knife clicks into the sheath and rides deeply in it. The knife stays in place reasonably well, but without the need for a crowbar to draw the knife when needed. The ferro rod clicks in securely too, so there shouldn’t be a problem with it working its way out of the loop and becoming lost.

“The blade of the Kansbol has a Scandi grind from the handle to about halfway out, then the blade tapers along its entire width on each side to the point.” 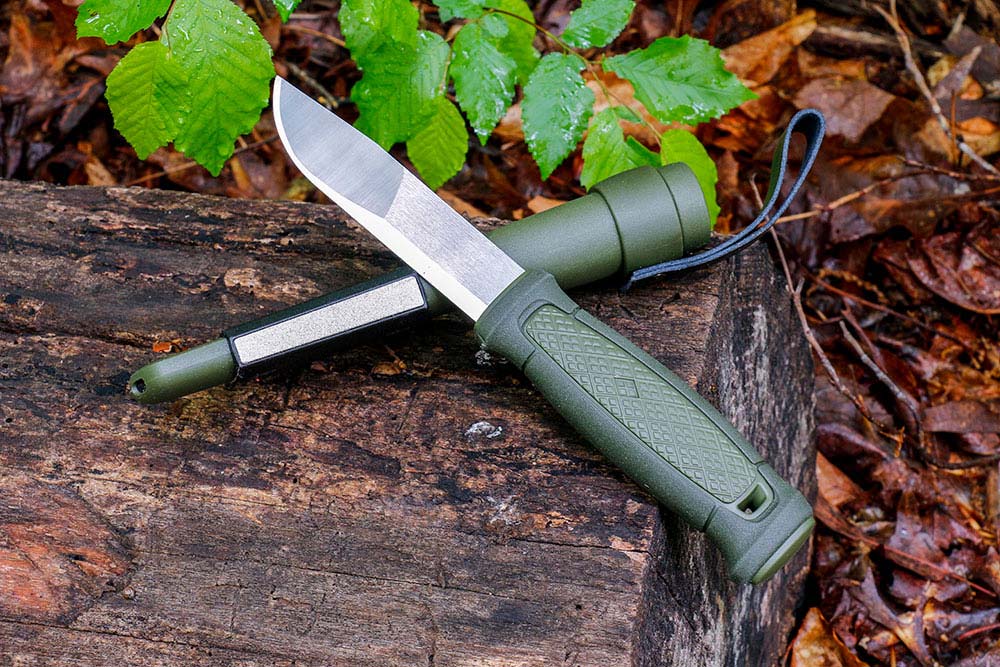 The Kansbol is a quality knife at a reasonable price. Its light weight makes it easy to bring along on most any outing.

A length of thin, reflective cord is included with the kit that can be tied as a lanyard to either the ferro rod or the knife itself. I didn’t use it because I didn’t want it to catch on things when walking through thick brush.

If you’re looking at different Morakniv models, you’ll notice lots of similarities between the Garberg and the Kansbol until you look closely at the blade itself. The Garberg features a Scandi grind the entire length of the blade.

The blade of the Kansbol has a Scandi grind from the handle to about halfway out, then the blade tapers along its entire width on each side to the point. 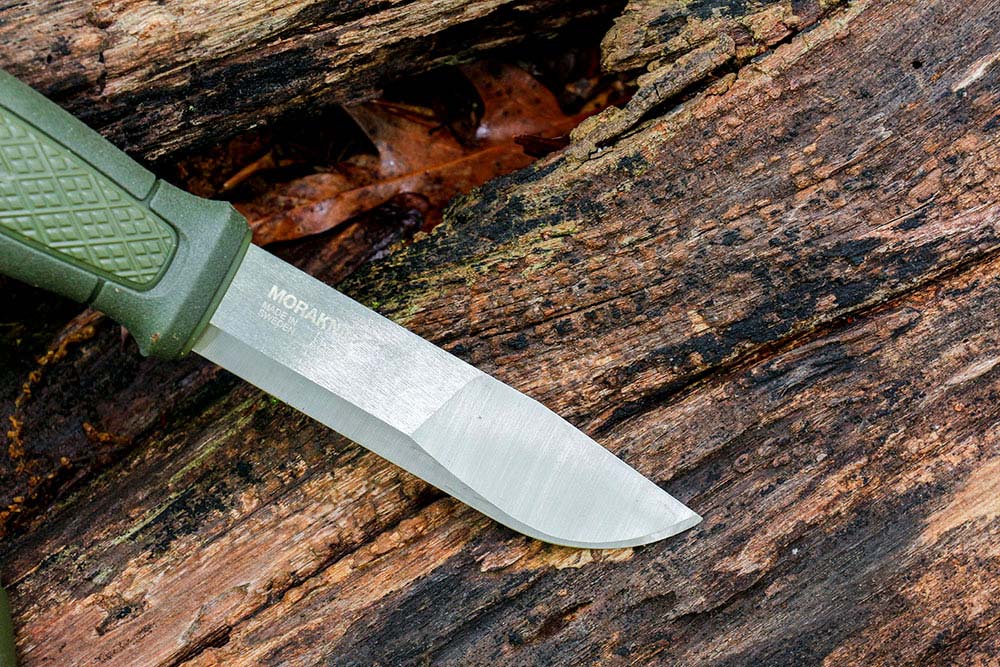 The blade of the Kansbol is unusual in that half has a traditional Scandi grind and the other half tapers to the tip.

“The Kansbol knife was developed as a successor to the very popular Mora 2000 that has been a bestseller for Morakniv for over 30 years,” said Thomas Erikkson, product specialist with Morakniv.

“The knife blade has the same blade design as its predecessor that consists of a typical Scandi grind edge close to the handle and a more skinning type of edge towards the tip that is better suited for skinning the hunter’s prey as well as for the camper’s food preps around the campfire. The Kansbol is the better light weight option to Garberg when you have to carry your gear and has a priority to keep the weight down that you have to carry yourself.” 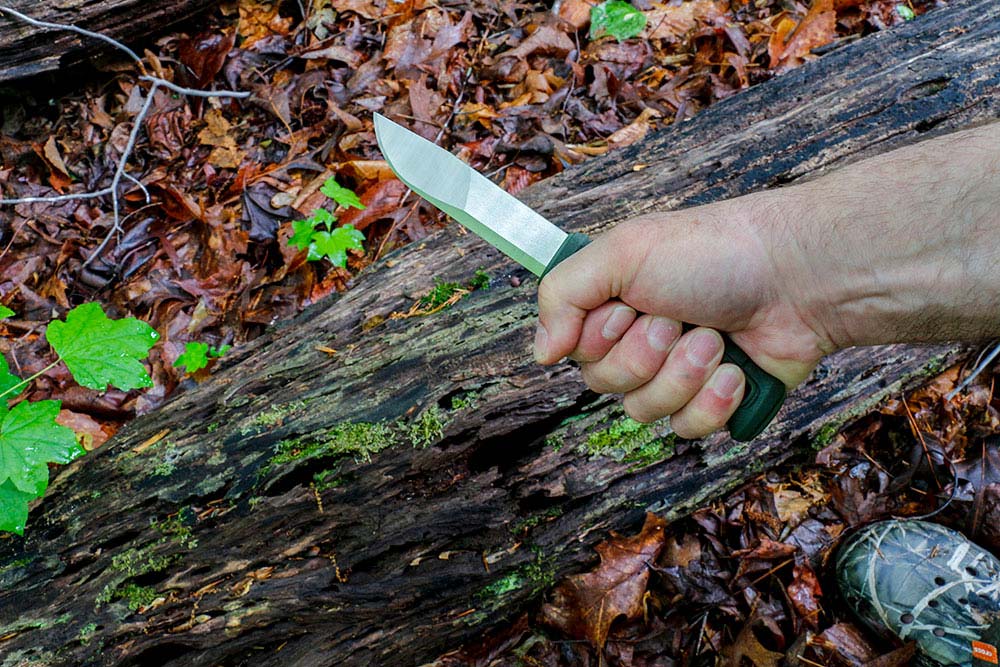 The Kansbol’s barrel-shaped TPE handle allows for a very comfortable and secure grip on the knife.

To quantify that weight difference, the Garberg weighs about 8.72 ounces, while the Kansbol is just 6.25 ounces. The edges of the blade spine are rather sharp too. That makes the spine handy for processing tinder and using it as a striker for the ferro rod.

PART OF THE KIT

The Kansbol came with a good, sharp edge. It’s very good for working in wood, although I can see the narrow, tapered tip being a good penetrator if you were working on something such as an animal hide to improvise foot coverings, mitts, or other needed items. 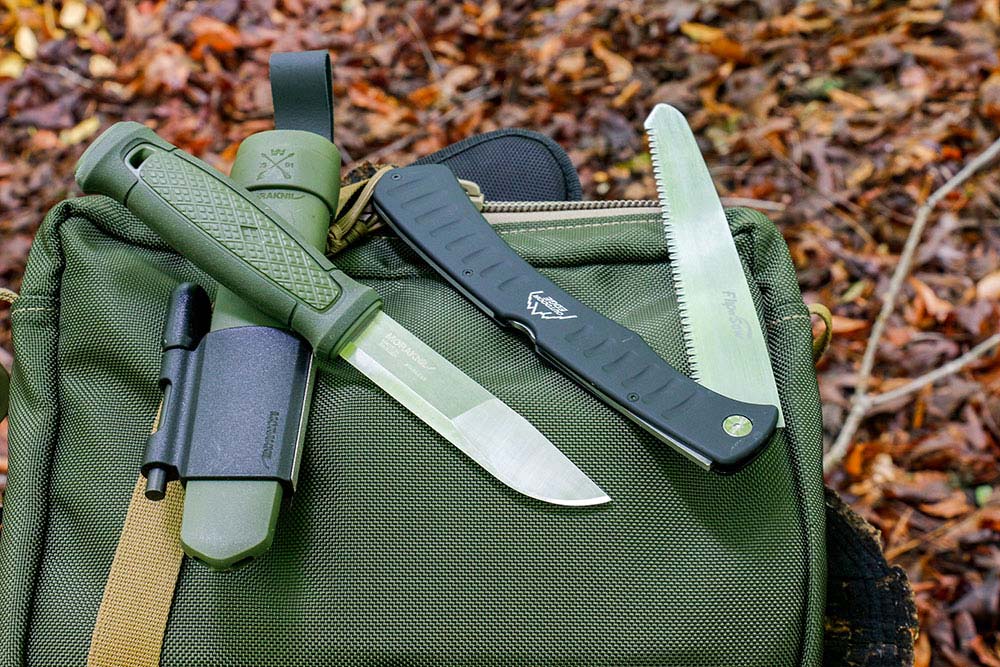 The Kansbol would be a good, lightweight companion for a small folding saw, such as this Outdoor Edge Flip n’ Saw.

This isn’t a beefy blade that you will pound on and abuse. But if you need some finesse to make what you need, this knife can handle it, whether you’re simply trying to make your wilderness stay more enjoyable or if you’re struggling to survive unexpected circumstances.

For now, this knife has found a home in the PocketUp Companion Bag (PocketUp.net) I carry over my shoulder when traveling light. For the price of them, I might pick up one or two more.