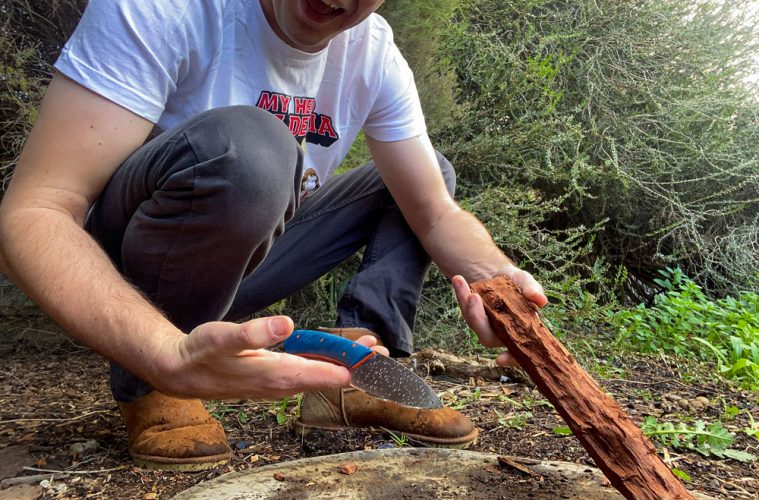 A Newbie Bushcrafter in Australia

Tales of an Everyday Joe Bushcrafting through the Australian Wild

I truly hope there is a proper bushcrafter contributing to this issue of Knives Illustrated. You, dear reader, deserve more than me. What a skilled bushcrafting bushman can offer you are tales of knife-led conquests of adversity and triumphs of the minimalist ideal.

A skilled bushman’s reflections can give you something to aspire to. Abundant skilled voices are out there; at the forefront of my mind is Mike McQuarrie, a.k.a. MCQ Bushcraft on YouTube, whose well-filmed and calmly spoken films provide fuel and ambition for those who look at the bushcraft knife and feel an itch to really use it as a tool rather than to want it as an object.

As a consumer of knives, the healthiest mantra to keep on all knife related occasions … is this: These tools are to make my life more enjoyable.

I feel that same itch—the itch to escape the generic modern life and dirty my hands and blades in earnest rather than in theory. This article you’re reading, however, is a true story of failure, of how every time I reach to scratch that itch, I find myself reminded of what all our mothers told us: that often scratching an itch makes it worse.

Nonetheless, my account speaks in more general terms of some less conventional ways that people can enjoy a knife. 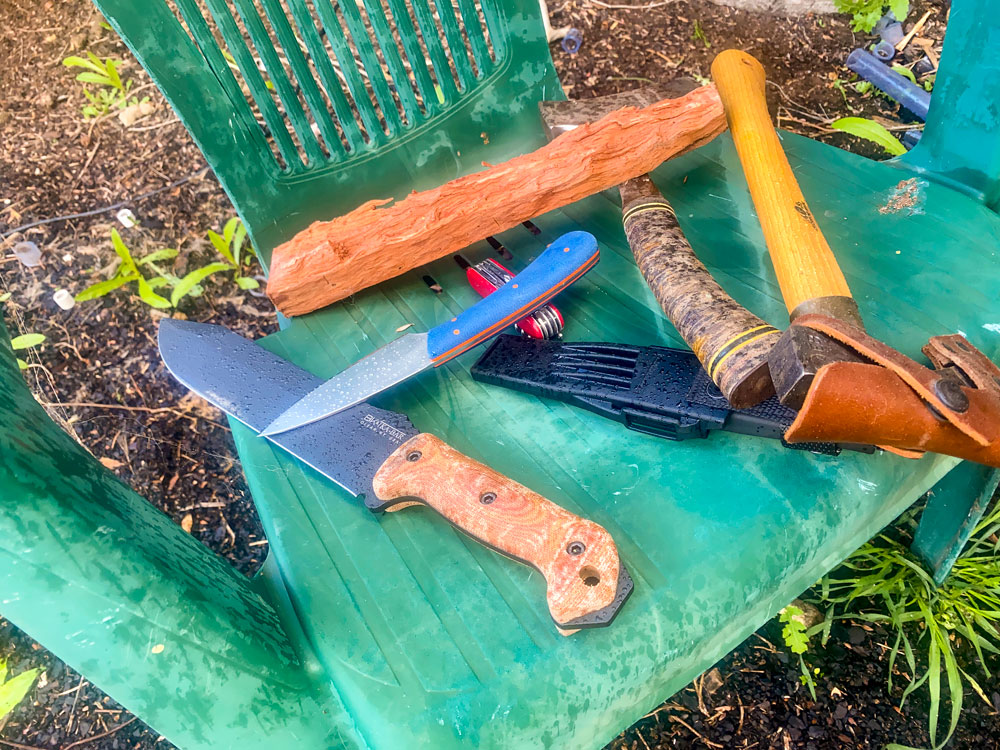 Whether you’re an experienced bushcrafter or an idiot in the outback, you’re going to need a lot of tools.

When it comes to bushcraft, I have no credentials, though I do have a YouTube channel. It is moderately successful for my very specific niche interest—a knife fan channel with steel discussion and occasional satire of the industry. It’s successful to the point that when I stop making videos for a while, I get a few messages asking when my next video is.

But should you look to me about bushcraft? No, not as anything other than as a possible contemporary, a weekend warrior or average bushcrafter Joe being given a voice for a day to speak on my experiences and views. Or as a cautionary tale of a bushcrafter, if you like.

The thing is, I went out into the Australian wilderness with my idea of what bushcraft was. Let’s discuss where I built that preconception. In brutal hindsight, I would estimate my knowledge of and assumptions about bushcraft stemmed from two sources: First, I received smaller but fairly nutritious doses of information from a couple of fairly non-controversial well-regarded TV experts, Ray Mears and Cody Lundin.

The problem arises when I assess my second source of bushcraft nutrition: other Everyday Joes like me with YouTube channels, where you can watch endless videos where we perpetuate the same knife tests and, often without a shred of self-awareness, proclaim them to be bushcraft tests. You know the tests I mean—cross grain batoning, striking the spine of basically every knife, making fire boards and feather sticks. They’re tests of steel, build quality, and capability for certain, but they ain’t bushcraft. I know this now.

“Am I the only knife guy who, when I go camping in a more traditional sense, comes away thinking, ‘It was fun, but I thought there’d be more knife!’”

So, let’s cue the dream sequence. Change the camera lens to sepia, slow acoustic guitar noodling between sounds of nature. The plan is to spend a night or two in the woods with minimal gear. People will exclaim to me, “That’s all you are taking?” I smugly nod in reply. My knife will rarely leave my hand as I use it to fashion all nature of shelters and tools.

All problems will be overcome with the splitting of wood and the shaving of sticks for an efficient fuel source. I will have the fabled Real-World Use on tap to make my eventual thoughts on the knife in question forged in the fires of credibility, backed up with video evidence, steeled against the arrows of the comment squad in the eventual filmed review I will assemble.

It will be perfect. 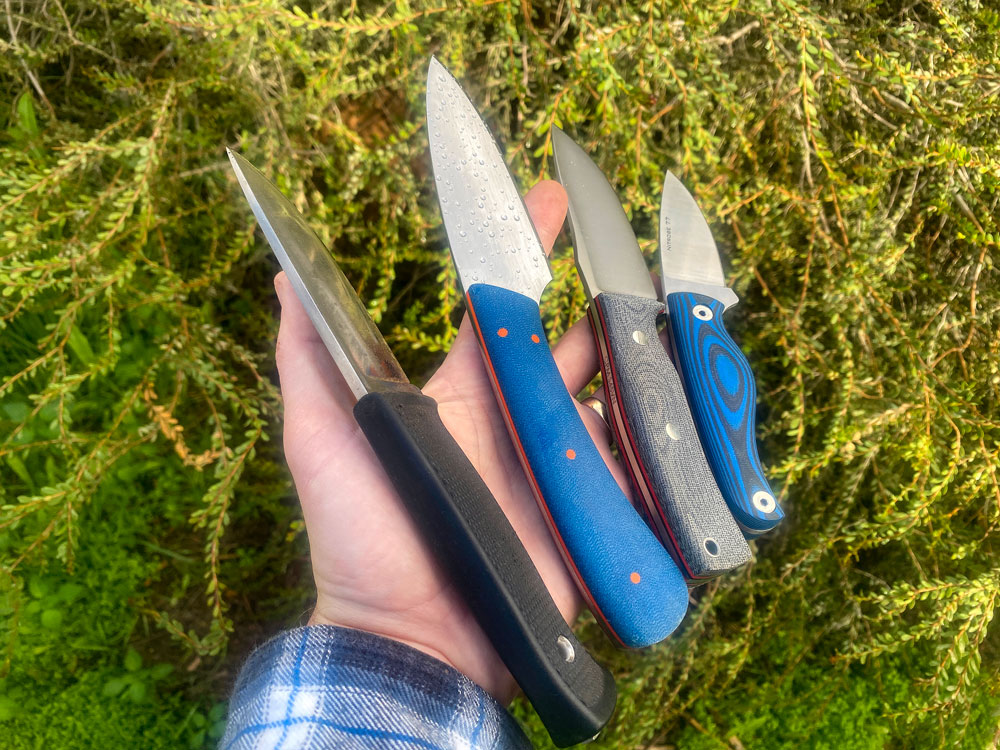 I thought there’d be more knife!

The first lesson I learned was how time plays tricks when it is cold. The sun races away from you, and workable light for bushcraft activities vanishes with 30% of your camp-building tasks accomplished. But then when it is dark and cold, the cold seems to catch the time and throttle it, and you sit in the cold darkness to ruminate on how cold and dark it is, and how many camp jobs you have left to do.

I did, however, fashion a staggeringly rubbish wooden branch camp bed with my test knife of choice: the Becker BK7. After a failed attempt at a from-memory A-frame type shelter, my hazy knowledge suggested two things: It’s good to be off the ground, because the ground is where all the cold lives, and that I once watched somebody at one time or another build a wooden platform bed. Now to squash those ideas together and use only a knife to achieve them. 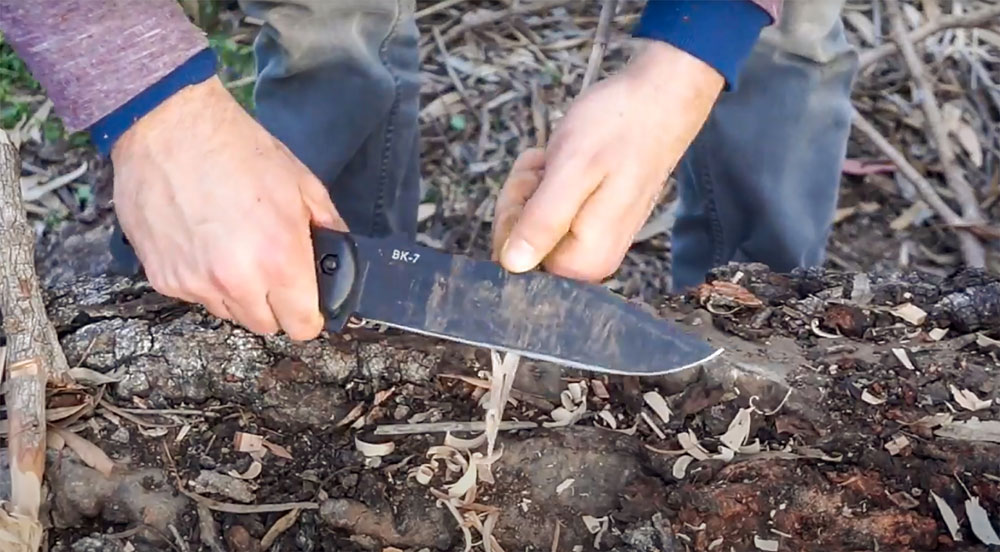 A big fixed blade is always good to have in the bush.

Let’s talk about chopping with a knife. What an unpleasant task. As I took my 7-inch knife to Australian hardwood, I was reminded of the time my 7-year-old once tried to dig an Olympic swimming pool in our backyard with a garden trowel.

Per-motion progress was made at a woefully inefficient cost. The initially gratifying chunks of outer bark flying away in the expected V notch soon gave way to the merciless shock of the seemingly knife-blade-repellent wooden interior.

But I kept chopping. And chopping. I continued my bicep workout for another seven or eight branches worth of wood, dragged the branches to camp and built from hazy memory a camp bed slash monument to my failings as an internet-led bushman and bushcrafter.

“Let’s talk about chopping with a knife … The initially gratifying chunks of outer bark flying away in the expected V notch soon gave way to the merciless shock of the seemingly knife-blade-repellent wooden interior.”

With my excursion in bed-craft leaning heavily into failure territory, I found some solace in fire-craft. Telling myself I would feel better once I had a warm fire, I got to work feather-sticking, batoning large wood into small wood, and generally building what were a series of honestly fairly successful fires, providing fierce and somewhat overbearing warmth to whichever part of me was facing it.

It was as I sat, feeling like a piece of meat burnt on one side and raw on the other, that it began to dawn on me that the hard use knife review I was filming had truly evolved (devolved?) entirely from review and experience and into a piece of comedy.

A night spent on a camp bed with ergonomics inspired by the dungeon of a deviant medieval English lord was enough to permanently shelve that concept for future minimalist endeavors. Instead, on subsequent attempts, I used a burned-out tree stump with a bed of reeds and a sleeping trench with heat offset by a bed of buried coals and a nearby fire. 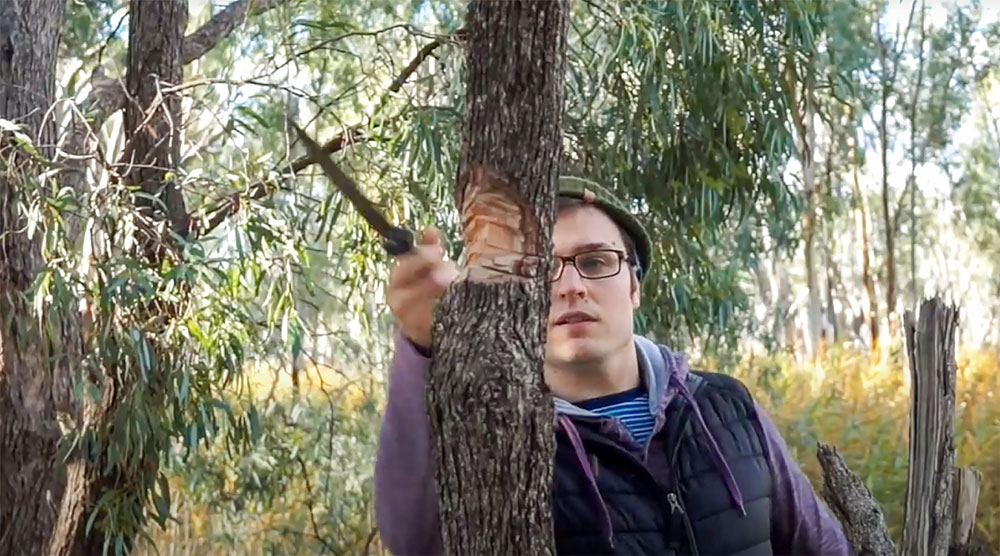 Chopping with a fixed blade may not be as much fun as you think.

The Lessons for the Bushcrafter

Failure is the ultimate teacher, and my conclusions are numerous. The desire to buy these fixed blade bushcraft knives naturally breeds a further desire to go forth and use them as the sales media encourages. Perhaps mine are tales of eyes being bigger than stomach, ambition outmatching capability.

The feeling of having a knife on your hip and wanting to will it into use is a part of the knife enthusiast experience. As Gus Johnson hilariously illustrates in his comedy short, “Your Friend Who Always Has a Knife,” (which I suggest you search and view) we knife people are consumed by the known capability we carry on our hips or in our pockets.

We live in perpetual hope for the moments to occur when we get to be the person who had the thing nobody else had, save the day in a small way, and there then being much rejoicing. 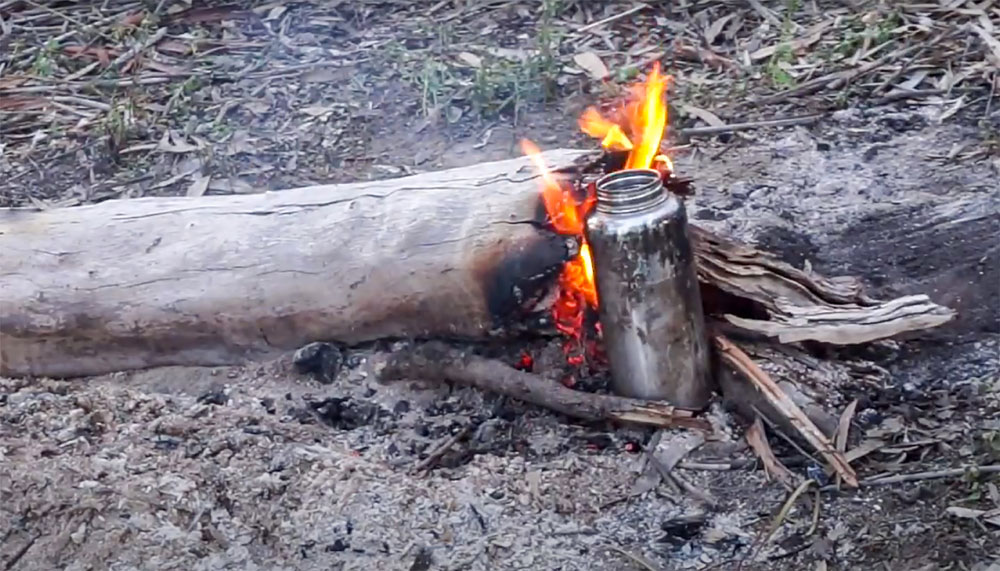 Bushcrafting breeds creativity, even if it may not always be a great idea.

My hurry to suddenly use my fixed blade knife for all the things may have been a case of cutting off my nose to spite my face. Am I the only knife guy who, when I go camping in a more traditional sense, comes away thinking, “It was fun, but I thought there’d be more knife!” Turns out rushing to ditch the gear to remedy that, without adequate training, made me feel like just a bit of a dickhead.

Bushcraft to me remains somewhat of a vague concept. I always remain safe when I go minimalist adventuring; despite being marooned to “commit to the bit,” home is within reach via phone.

Plus I conduct my adventure with the assumption that, at best, I will end up with some filmed physical comedy, a good story, and some reaffirmation that these knives can have perfectly satisfying practical lives as foils for any endeavor, whether it be living your role of high level bushcrafter in earnest, or accompanying a casual dickhead like me on a more abstract series of self-teaching moments. 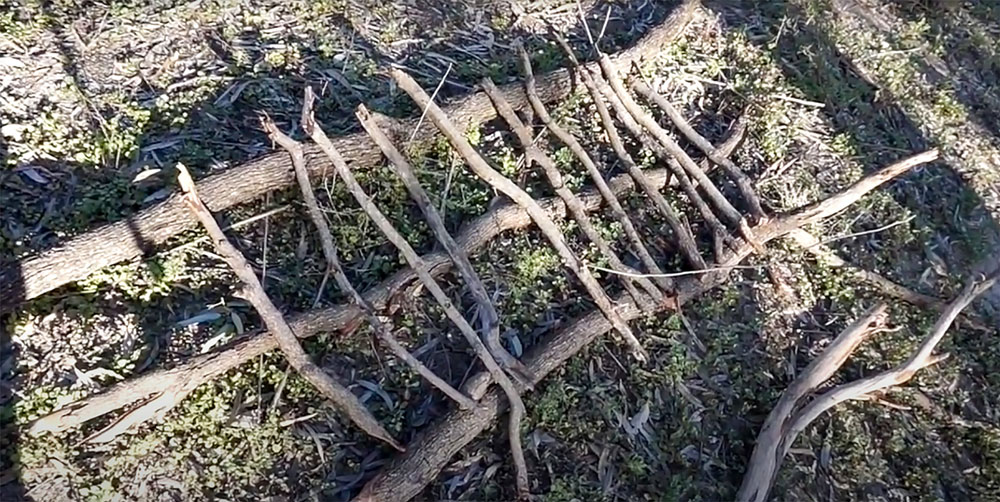 When you try to learn a new skill via the internet, it’s all about the execution.

As a consumer of knives, the healthiest mantra to keep on all knife related occasions, whether balancing the books to justify a new purchase, having an enthusiastic discussion on an online forum, admiring your collection of safe queens, or simply hitching your choice of daily carry to the inside of your pocket or belt, is this: These tools are to make my life more enjoyable.

With that as a baseline to build from, whether you have the skills to play the role of professional knife user/ bushcrafter / hunter or are just another dickhead like me, you’ll retire at the end of each day with a more positive outlook on the hobby. 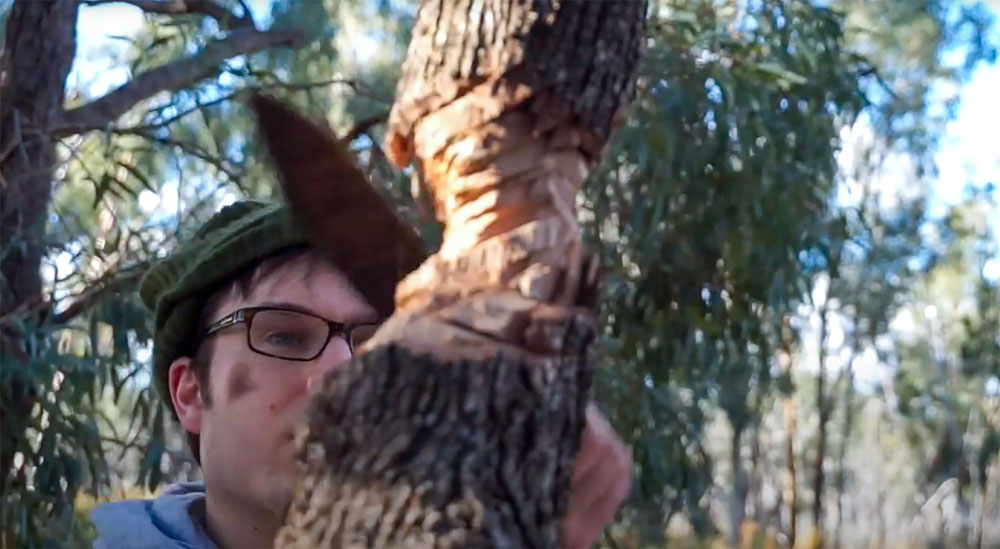 As I took my 7-inch knife to Australian hardwood, I was reminded of the time my 7-year-old once tried to dig an Olympic swimming pool in our backyard with a garden trowel. 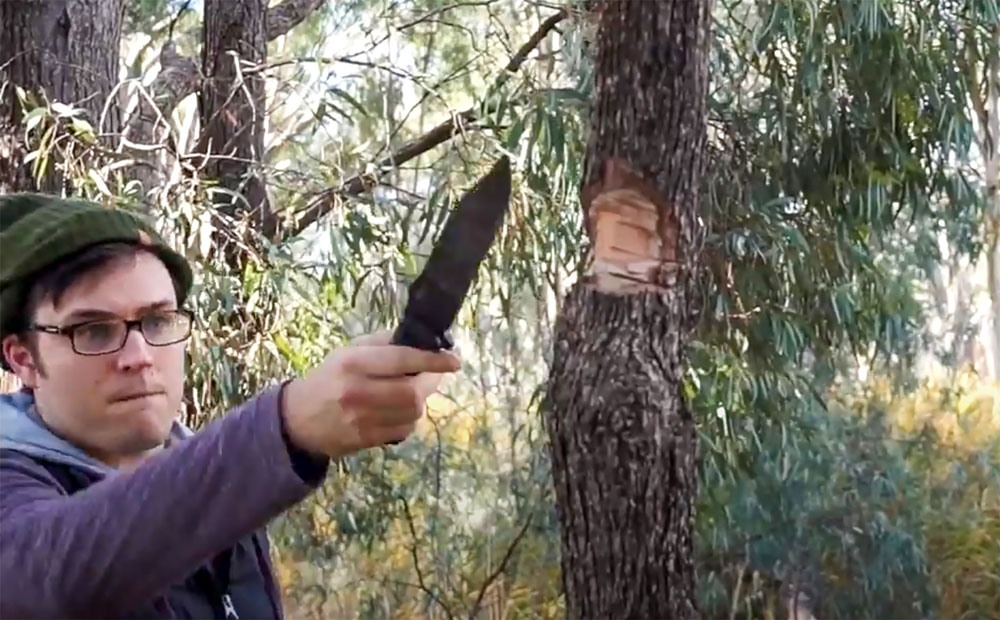 Check them out at www.youtube.com/cedricada