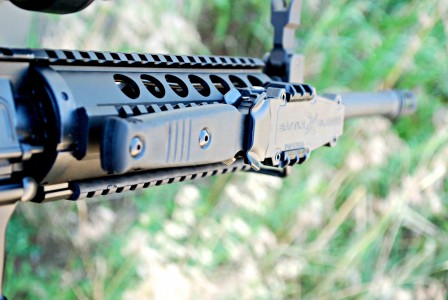 Paul Granger cautioned that he couldn’t comment on the rifle -mounting setup because he was not a rifleman. Nor does he own a rail-system rifle. His commentary for this article would be reserved to the knife itself, one he described as “the little rifle knife.” 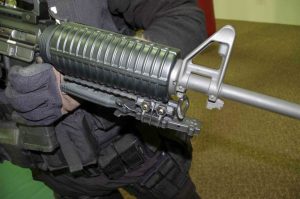 Kelly Van Orden’s assessment of our troops’ needs (with their input) and their equipment, was that if an operator needed to “dump kit and git,” they never left without their rifle, so why not design a knife that traveled with the rifle at all times?

Right off the bat, as he removed the Wolfhawk knife from its sheath, he was impressed by the clever locking system. (A thumb release that locks the knife into the sheath.) It took a while to get used to the lock, but he felt it was a great feature. The knife deploys easily once the operator has experience with it. This locking feature would especially appeal to anyone who has ever lost a knife in the woods.

The polymer sheath’s edges were a little rough. But because it’s made for a Picatinny rail, he felt it didn’t really matter. If the knife had been developed for belt use, Granger would have filed off the rough edges. (The blade is advertised as being able to be belt-mounted.) There’s a good drainage hole in the sheath.

This is a three-piece knife: the metal tang blade and the two sides of the handle. Granger said the Wolfhawk fits relatively snugly in the hands, and is equally snug and comfortable in all four grip positions. The balance is good. There’s jimping at both ends of the handle: near the butt and at the top and bottom. There’s also jumping at the front end of the handle inside the finger grooves and at the top and bottom of the small double guard. The jimping is deep, coarse and effective.

The guard is just right for its size and purpose. There are also two scallops and four grooves on the face of each side of the handle. That’s nice, especially if the knife is used for horizontal slicing. A full tang runs through the handle, but the butt itself is not useful for hammering tasks. Granger would probably add a lanyard hole at the butt. 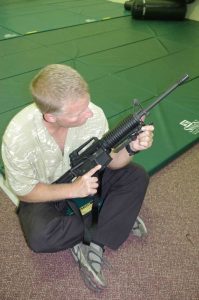 The tanto blade he examined was thick with a shallow grind, and not particularly good for detailed work. But it was sturdy and probably valid for military uses such as shredding wood for tinder. Japanese-style tanto blades are excellent for piercing, and are the choice for Samurai swords and other stabbing weapons. The knife’s shallow grind renders it ineffective for outdoorsman tasks like hunting and skinning. A high, flat grind or hollow grind would be better for that.

The blade is made of 1095 steel, a carbon steel that TOPS commonly uses. The company lists it as being high carbon with an RC of 56-58. Its finish is described as “black traction coating.” This coating will protect the blade from rust totally except for the edge. Sharpening the blade would remove any such rust.

The Wolfhawk arrived on a rather hot and humid summer day in August. My writing pals introduced this knife to me as something different. When I was able to give it the time it was due, I found them to be correct. First, the knife was not as large as the fixed-blade knives I had been evaluating of late. Second, the knife came with an interesting scabbard. Third and finally, its mission was not the same as all the other knives I had evaluated recently. 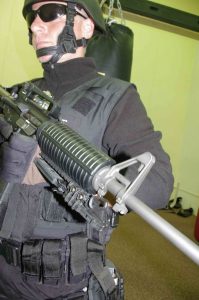 Mark Allen Prince is shown here with his Wolfhawk mounted on his tactical rifle’s Picatinny rail.

Kelly Van Orden, the Wolfhawk’s designer, created this knife to support our troops overseas. It was not designed with the specific intent of any task other than to be a back-up tool for the military. By assessing our troops’ needs (with their input) and their equipment, he ascertained that if an operator needs to “dump kit and git,” they never leave without their rifle. So why not design a knife that traveled with the rifle at all times? As a result, TOPS Knives produced the Wolfhawk and the scabbard that would attach it to the rail mounts of an M-4 style rifle.

The knife itself was at first rather plain to me. It appeared to be a “mini tanto” with a straight spine and rather simple Micarta grips. It didn’t seem large enough to be a fighting knife, or a bush or survival knife. I thought perhaps it was just a novelty due to its scabbard’s design to hang off of a rail. But then I began the field evaluation.

The Wolfhawk easily withstood the 400 strikes delivered from the steel claw hammer. One hundred strikes were delivered to each side except the edge. I observed only slight deformation on the spine from the 100 strikes delivered there. The sides of the blade showed only slight cosmetic disfigurement, and the tail end of the grip showed none! The black traction coating is tough, tough, tough. The hammer test removed only a bit of it on the 90-degree angle of the left side of the spine.

As the knife is often a tool more so than a weapon, I used it as such. I pried a board from a pallet with more than a little effort (mostly because the little knife lacked the leverage of the larger blades); this caused no damage to it at all. Although the knife is not big enough for outdoor chores like batoning wood for a fire, or hacking large branches for making a shelter, it worked well for duties like carving wood, peeling apples, and general kitchen work. 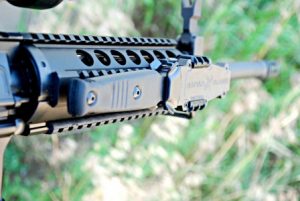 The high-carbon steel, 5/32-inch thick blade is 3 1/4 inches long. As a result, it’s not best for heavy chopping. As the blade reviewed is a tanto style, it does lend itself to powerful piercing, however. I was surprised when I was able to penetrate the steel Jeep bed. The little Wolfhawk blade penetrated the thick steel more than an inch in depth each of the six times I thrust into it. And there was only a minor chip—about 1/8-inch from the tip—when this test was finished. This was easily fixed with a little work from a coarse stone and the kitchen steel.

The jimping on the thumb indentations provide a strong purchase for thumb and finger, but proved to be too painful in the part of the evaluation where I coat the knife with canola oil and stab the ol’ poplar stump violently (this is normally completed using a “saber” type grip). It’s important to note that this activity became ideal when I put on a pair of GI leather gloves and commenced stabbing operations.

The icepick or reverse icepick grip with thumb over the butt on this knife really shines when desiring to penetrate an object. Also, I found the knife worked well for cutting and slashing when I “choked up” on the grip and placed my thumb on the backside of the blade beyond the thumb indentation and guard. I would recommend the grip of the knife to be a bit larger so that it would fill the non-gloved hand better if possible.

I must admit I took a shine to the little knife after handling it for a few weeks. If the knife and its sheath were designed with input from our troops, for our troops, then who am I to determine their functionality in the sandbox? 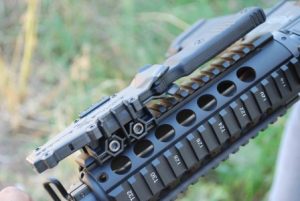 First Choice For Anything That Folds

As an American peace officer who spends time in harm’s way hunting monsters, I don’t see the need to attach the knife to my rifle rails. But I do see this little fixed blade as a first choice for anything that folds and that any knife maker calls “tactical.”

The cost of the knife for a field troop is a bit high at $169.95 (MSRP), but I can attest to the knife’s quality and its performance in our field test and give it an excellent rating.

If I needed a knife and had to choose from any “tactical” folder or Kelly Van Orden’s creation, the TOPS MP-4 Wolfhawk rifle knife would do my bidding hands-down, anytime and every time.