When someone mentions tough knives, my thoughts usually stray to full-tang fixed blades with some heft to them.

No one expects a folder to compare to a heavy-duty fixed blade. But with their newer lock designs, the Benchmade and Cold Steel folders are brawnier than most. We tested these two folders to see how tough they really are.

Folding knives were made for years with no lock at all. While this is technically correct, I like to prepare for a worst-case scenario. For folding knives, this means that they should be able to handle things above and beyond the call of duty without having to worry about lock failure.

How much can a modern lock take in an emergency, when some catastrophe makes it necessary to abuse a knife in some way? That was my question, and one that two manufacturers helped to answer.

Cold Steel and Benchmade knives both sent samples of several knives. The purpose was not to simply break a knife, but to put it through tests that simulate heavier use than any sane person would put on a knife. This abuse goes beyond what we would expect of any knife in normal usage.

We set a benchmark and each knife put through the same test. This method assured that any failure would not be the result of fatigue or heavy wear. The criteria for passing? How my fingers would have fared had I been holding the knife.

It’s easy to test a lock by loading the blade’s spine, but this doesn’t  take into account any shock or spring in the system. That is why a lock that seems good can fail during a spine whack. Because we were testing for worst-case scenarios, we simulated the mother of all spine whacks.

I developed a test using a lever with just over 50 pounds on the end, falling 9 inches to drive the knife’s spine into a ½-inch steel rod. The result is more than 70 ft-lbs of force on the blade at a point about 3 inches from the pivot.

The second test gently loaded each blade with 175 pounds. Each blade was marked at a point 3 inches from the pivot. The way, the locks would take a similar load, despite differences in blade length. This test required leverage, or jumping up and down on the handle. Consider the weight of two almost-full 90-pound sacks of cement hanging from the blade, and you get the idea.

All testing was done on the machine illustrated here. Notice that the knife was not exactly vertical, but tilted about 5 degrees, which adds some side loading to the lock. 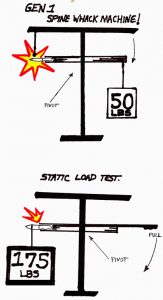 The knife-testing machine of which the author says has no heart.

Two things that are important for readers to understand. First, neither manufacturer knew exactly how their knives were going to be tested. They stuck their neck out in sending these, not knowing how the tests would turn out. Second, both of these tests are absolutely abuse, and represent much more stress than any user could put on the blade in any conceivable situation, barring stupidity. Onto the knives!

Read about the results of this folding knives test in a related post.

This article was originally published on May 15, 2016