The Gold Knife: The true story of travels with Charlie Genella 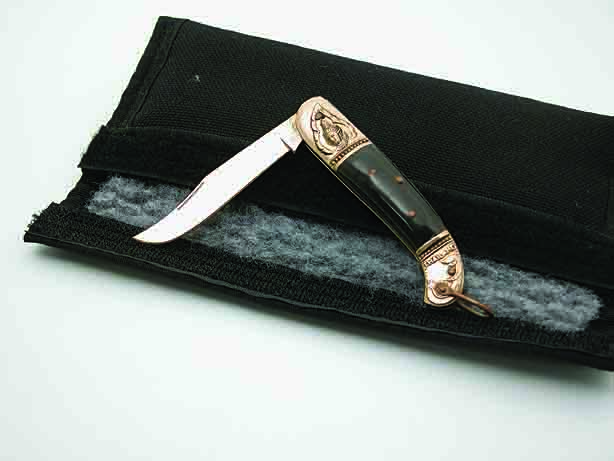 Charlie and I traveled the show circuit together in those days. He insisted that we be in front of the roll-up doors the minute the show opened to be among the first exhibitors in the room. That way, we would get there earlier than the other knife collectors and scarf up all the bargains. What I actually meant was that I would set up the tables and sit with his and my knives while he walked around the shows looking for bargains.

Any new knife was a guaranteed sell in those days — when knife collectors had not yet learned to narrow their collecting focus. The day before, one of Charlie’s sources had come up with some unusual knives with gold-colored bolsters and blades like the one illustrating this article. Charlie planned to sell them for $2.50 each. The knives were marked “Thailand” on the bolster, and were packed in sealed plastic bags of 12 knives. Charlie bought 10 bags for a total of 120 knives. The story that came with the knives was that they had been obtained at an airline salvage auction, so this was a one-time buy.

Charlie rounded an endcap of tables, and there before him, under a glass dome, was a knife that looked identical to one of his 120. Under the dome in neat calligraphy was a sign reading, “Solid Gold Knife — Not for Sale”. Charlie laughed, and the man behind the table looked up.

“That’s not a gold knife. I have some of them,” Charlie told him.

“I have them under my table — right here at this show.”

“They’re not like this one. This one is gold.”

Then the table holder got cagey and added, “How many do you have, and what do you want for them all”?

Before I go any further, we have to understand that the last phrase, “How many do you have, and what do you want for them all,” is a challenge to any old-time knife trader. A gauntlet had been thrown.

But the question that confronted Charlie was how should he respond. He had a chance to take this guy if he didn’t overplay it. If he told him he had 120 knives back at his table, the dealer would simply pass, since the knife was not as rare as the dealer believed. If Charlie priced them too low, that too could spook the dealer. If he priced them too high and said he had a small quantity, the dealer might pass. All of this was processed in an instant.

“I think I have 10 of them, and I’ll take ten dollars each.” The dealer’s response was instantaneous, reaching for the roll of bills in his front pocket, peeling out a hundred-dollar bill and handing it to Charlie. “I’ll take them all … and more.”

Charlie pocketed the bill and came back to the table laughing about the fool a few aisles over. Charlie bragged about the sizable profit percentage he had made, telling me of his exchange as he pulled out a bag of 12 Thai knives, opened it, laid two on his table, and delivered the other 10 to the table holder.

On the way back to out tables, a change came over Charlie. He began to second-guess himself because, in addition to being a knife dealer and collector, Charlie loved to buy and sell gold and silver, and fancied himself to be very good at it.

Before he was back at our tables, the thought crossed his mind: What if the other dealer had been right and he was wrong? What if the knives were really solid gold? What if he had just sold 10 solid-gold knives for the pittance of $10 each?

This might not have bothered some people, especially if they had 110 other such knives under their tables, but some people were not Charlie. I have not mentioned yet that Charlie was tight with a dollar — very tight, and if he had sold 10 solid-gold knives for $10 each, it was a catastrophe.

He related his concern as he took the two knives he had laid out on the table and returned them to the bag underneath. I didn’t calm him when I remarked that it was possible that someone had chosen to make gold knives as a convenient way to smuggle gold out of Southeast Asia; it had not been that long since the fall of Saigon. “If I had some acid, I could test it,” Charlie concluded, “I have some acid back at my shop.”

Charlie worried for the rest of the show He walked the entire show trying to find someone who carried a bottle of acid with them for testing gold — with no success. He didn’t sleep. He contemplated going to the dealer and buying back the 10 knives he had sold. When he did go back, he was bluntly told by the dealer that those knives were not for sale but, finally, after some hounding, the dealer quoted Charlie $1,200 per knife.

Back at the table, other friends were brought into the examination of the knives, trying to determine by sight if the knives were indeed gold. They were certainly heavy. The color was right. It could be possible. Robert Jones and Paul Davis, both friends of ours, sat with us, and both of them — who always delighted in getting something over on Charlie — agreed after much contemplation that the knives had to be gold.

Charlie wasn’t sure, but he wasn’t taking in chances. He refused to put any of the knives out for sale. What if the dealer was right, and he was wrong? What if the knives were gold? He asked show guests when they approached his table if they had any hydrochloric acid. He knew better in those days than to simply ask for “acid,” since they would have thought he was soliciting for LSD. The more people he asked, the more anxious he became about being unable to test one of the knives, and the more convinced he became that the knives were really gold.

He fiddled with one of the knives throughout the remainder of the show. He ignored customers as he played with the gold-colored knife in his hands. He did not do suspense well.

There was no need to leave the show early on Sunday, because his knife show was inside Clements Antique Gallery in Chattanooga, Tennessee, and for security reasons, he did not have a key to the front door, which meant he could not get into his shop until 10 a.m. on Monday morning.

At 10 a.m. that Monday, when the door was unlocked, Charlie, Paul, Bob and I were in attendance to witness the testing of the gold knife. Charlie went straight to his shop and retrieved his pint jar of hydrochloric acid. We carried it to a corner of the parking lot, and as we stepped back, he dropped one of the “gold” knives into the acid. The acid made a hissing sound as it plopped in. Bubbles formed around the knife and a wisp of smoke rose from the jar. Right before our eyes, the knife vanished — totally consumed by the acid. No gold.

Paul looked over at Charlie and solemnly told him, “You know you could have sold the other 110 knives for $10 each? You just lost $825 in profit by letting that guy get away.” Charlie didn’t speak. He just turned his back to us and carried his jar of acid back to his shop. We waited until he came back to unload his truck from the show before saying our goodbyes. The first box he pulled out to unload was the one containing 110 non-gold knives. He ended up selling the remainder for $3 each.

Charlie Genella was the owner of Hixon Knife Shop in Hixon, Tennessee. Until his passing several years ago, he was a mainstay in the knife-show community, serving as Treasurer for the National Knife Collectors Association, and assisting in the production of many regional shows.

The story above is true.

This article was originally published May 23, 2016.