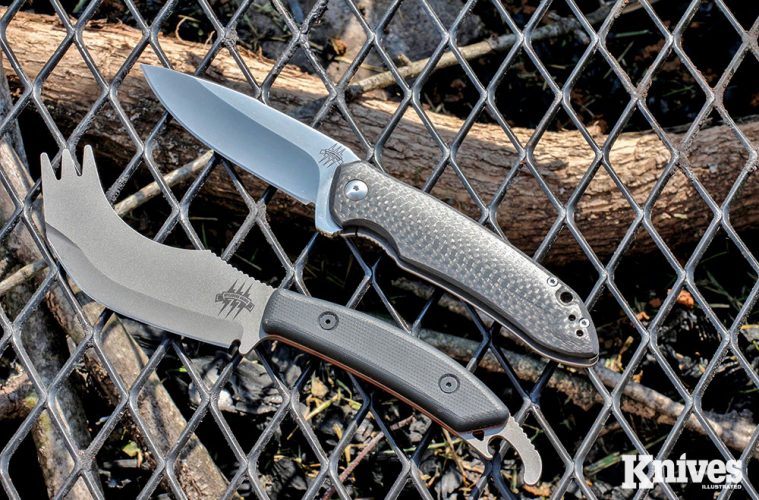 Life’s adventures somehow imbue the knives we carry with indelible memories that are vividly rekindled in our minds when we handle these tools decades later. It’s even better when a knife comes from the maker with a great story of its own.

The Gramps—a knife/fork combo (below)—and the Berlin Strike folder (above) from Attleboro Knives are both well-made blades with interesting stories behind them.Such is the case with Attleboro Knives, where each of its knives pays tribute to a part of our nation’s history and has some significance to the Hunt family that founded the company. The company itself is named for Operation Attleboro during the Vietnam War when company owner Ken Hunt’s father, U.S. Army Special Forces Master Sergeant William B. Hunt, was declared missing in action in 1966.

I had the pleasure to work with two Attleboro models recently: the Gramps and the Berlin Strike. The first is an unusual but highly useful fixed blade and the second is an extraordinary EDC folder.

Normally, I like versatility in my knives. But once in a while something special comes along that catches my eye. Such was the case with Attleboro’s Gramps knife. This is a specialty knife that has a notable heritage as well as a significance to the Hunt family at Attleboro Knives.

“…the Gramps will be one of my go-to camp knives.” 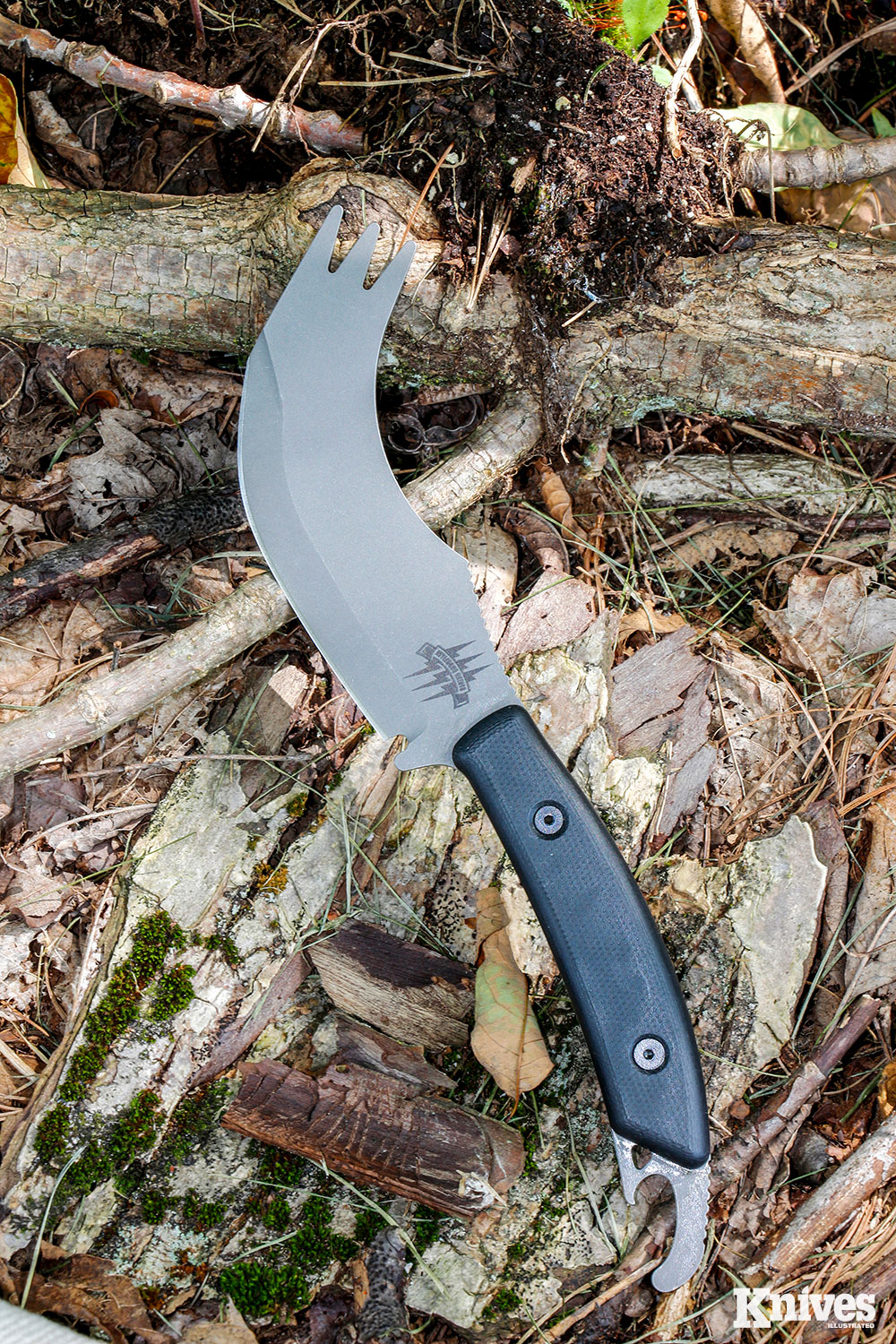 The Gramps features a sharp blade of S35VN steel and an upturned tip that ends in a fork with three tines. A bottle opener is included on the tail end.

We’ve all seen sporks, those combo utensils that combine a spoon and fork. Some even have some serrations along one of the outer fork tines so you can cut your mouth as well as the food you’re eating.

The Gramps is not a spork, but instead what has been called a knork. It is a combination of a knife and fork. Let me state this up front: This is not some cheap gimmicky device you might find in a discount store. This is a top-quality product in every way, from the design to the materials used to the excellent production. It is everything you’d expect in a custom or limited production blade, except it’s a bit different than your average EDC, hunting, or bushcraft knife. 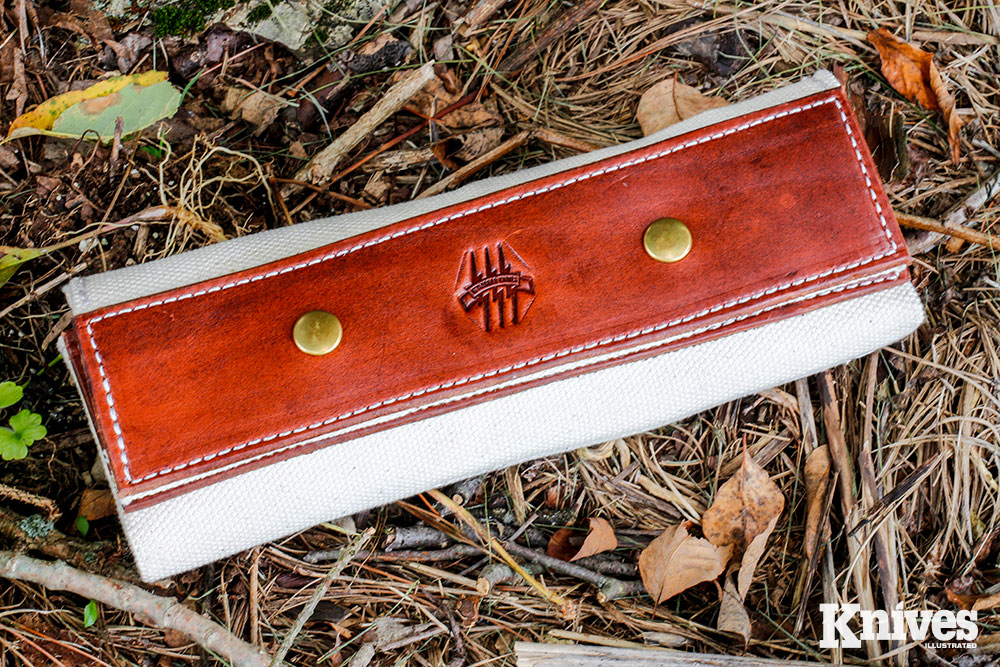 The Gramps field kit folds and snaps shut to secure the knife, spoon, and other contents 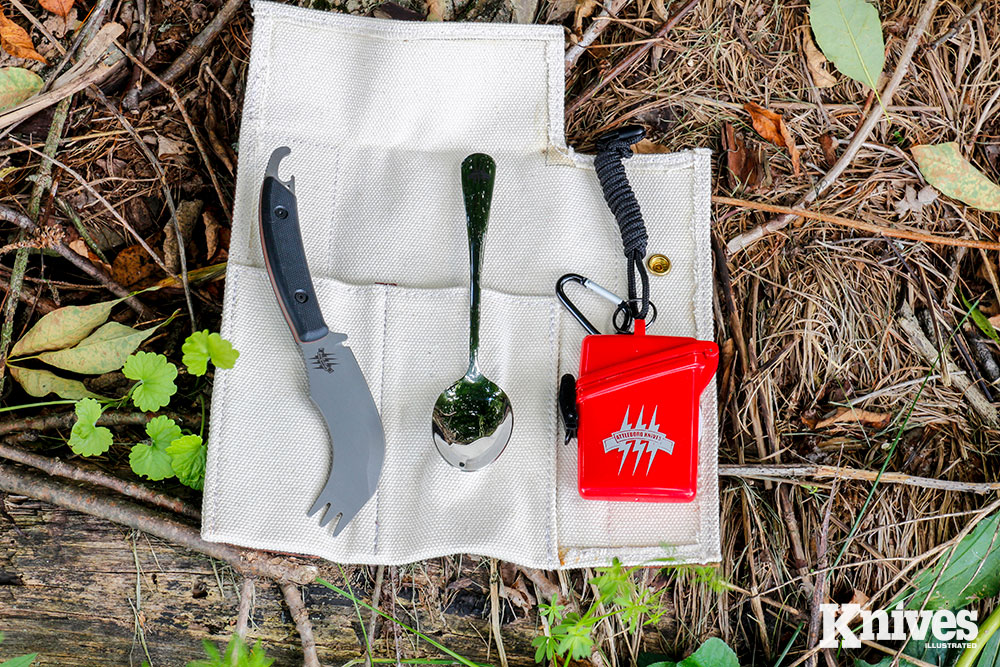 The Gramps comes with a tri-fold canvas and leather field kit that contains the Gramps knife, soup spoon, and waterproof container with matches.

The Gramps is constructed of S35VN steel with a matte gray stonewashed finish. Its 3 ½-inch blade features a Scandi grind before it turns up at the tip, which ends with three sturdy fork tines. It’s a full tang knife with the tang extending beyond the Micarta handle scales to form a bottle opener at the tail end. The scales are bolted to the tang over red liners. There is a thumb rise with jimping on the blade spine near the handle and a finger guard near the choil.

The idea of a knork has a history of its own. These utensils saw much use in the years following the Civil War by veterans who had undergone amputations or other catastrophic injuries that limited them to the use of one hand. The knork was an excellent eating utensil. 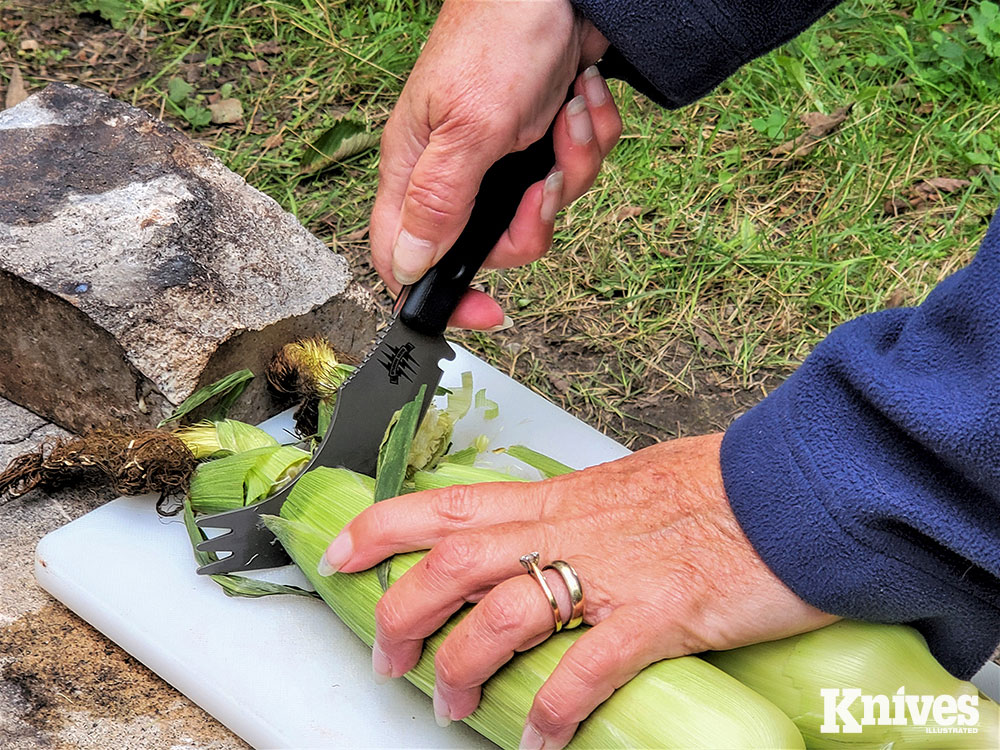 The author and his wife used the Gramps on a summer campout to prepare food for the grill.

The design also honors Ken Hunt’s grandfather, Everett J. Hammons (Gramps), who lost a hand in an Idaho elk hunting accident when a horse he was trying to control bolted, causing the lead rope to cinch around his wrist. He didn’t let that hamper his love of the outdoors, and he continued to hunt and fish, modifying his gear as needed. 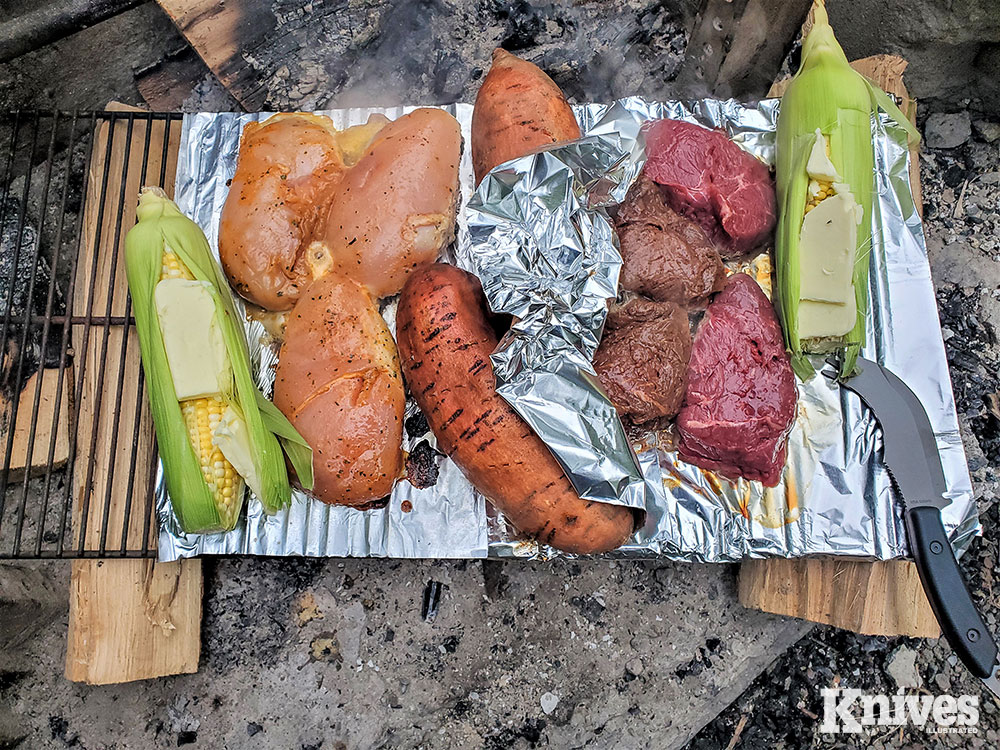 The Gramps doesn’t come with a typical sheath. It’s not the type of knife you’d normally carry on your belt anyway. Instead, the knife comes with a field kit that consists of a trifold canvas pouch trimmed with leather and snap closures. 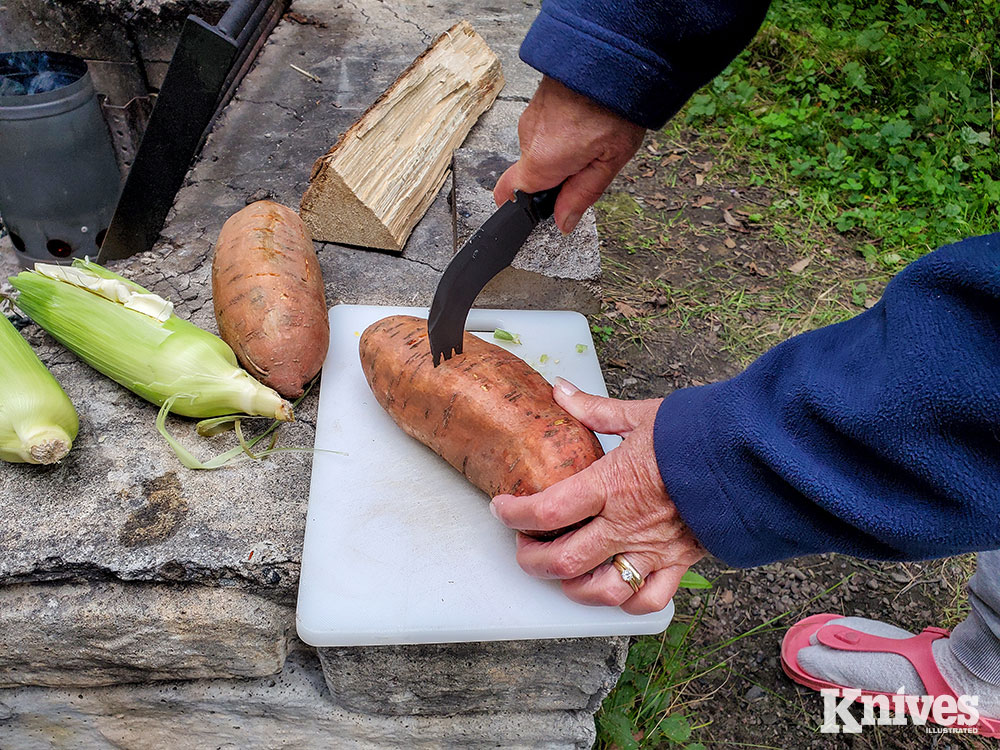 The author’s wife uses the fork on the Gramps to perforate the skins of sweet potatoes before placing them on the grill. She used them to poke vent holes in the aluminum foil too.

The field kit contains two utility pockets: one that contains the Gramps knife and the other that holds the included stainless steel soup spoon. I’m sure to make good use of that spoon when I break out the Dutch oven for my deer camp dinners. Also included is a Surf Safe watertight case with lanyard and D ring. Inside are a couple books of matches. I added a disposable lighter to the case.

My wife and I have been using the Gramps and field kit for food prep during backyard cookouts. We brought it along on a summer camping trip too. What we found is that the Gramps is an excellent tool when cooking on the grill. The blade is very sharp and served well for both meat and veggies.

Campsite cooking doesn’t always allow you consistent temperature control. We used the Gramps to cut into meat to see how well it was done. Then, with a twist of the tool, we were able to move chicken or steak around on the grill easily using the fork tip of the Gramps without the need of reaching for a separate utensil. Because of the curved shape of the Gramps, we found that it also worked well as an improvised spatula to scoop burgers from the grill to the plate.

I put a lot of miles on my car during the course of a year. I prefer to stay in campgrounds overnight and cook some of my meals in picnic areas along my routes. This field kit will become a regular part of my travel kit for these journeys. By the time you’ve read this, this kit will have accompanied me to the deer camp I set up each year with my brother and nephew. I am the self-appointed chief cook and bottle washer there, and the Gramps will be one of my go-to camp knives.

While I like the Gramps and find it very useful and unique among today’s knife offerings, I realize it’s not for everyone. What will have more widespread appeal to knife enthusiasts is the Berlin Strike folder, a collaboration between Attleboro Knives and designer T.J. Schwarz.

“The Berlin Strike is an exceptional folder, an excellent design with superb fit and finish.” The Berlin Strike is an exceptional folder, an excellent design with superb fit and finish. The more I handle it and use it, the more I like it. It features a 3 ½-inch drop point blade of D2 steel with a hollow grind. The blade opens with either hand by a flipper on the tang. There is some initial resistance when pressing the flipper. Once that’s overcome, the blade swings open along a ball-bearing pivot that might lead some to believe it’s a spring-assisted blade, but it’s not. 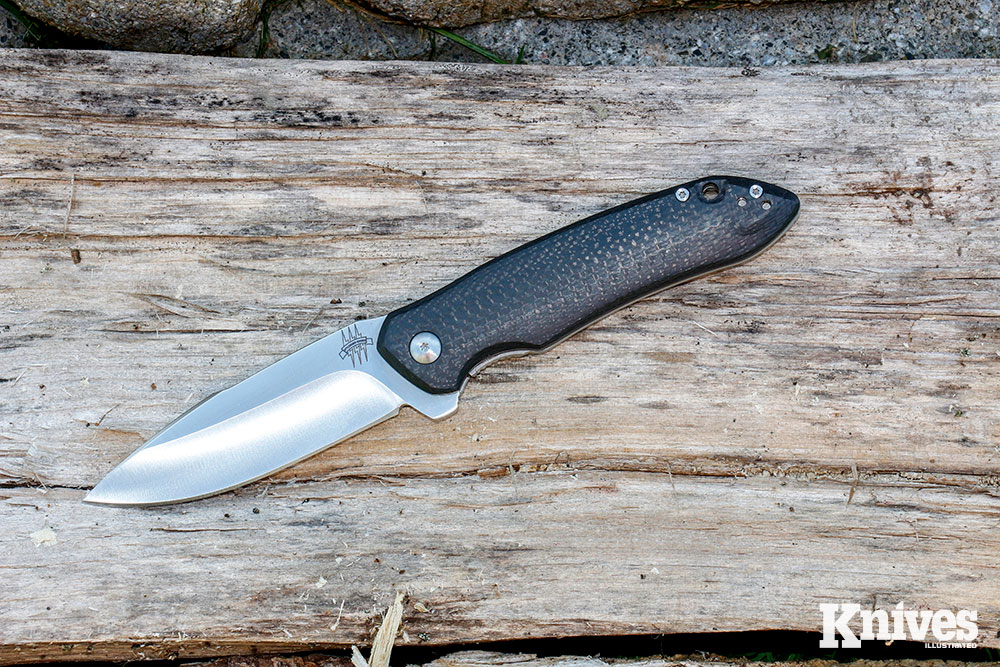 The Berlin Strike is a well-configured knife with 3 ½-inch drop-point blade of D2 steel.

It’s an excellent design that’s not likely to open partially in your pocket on accident. But it will open fast and snap into its frame lock securely with a quick, purposeful flick of your index finger. There is no blade wobble, and the blade comes sharp out of the box. 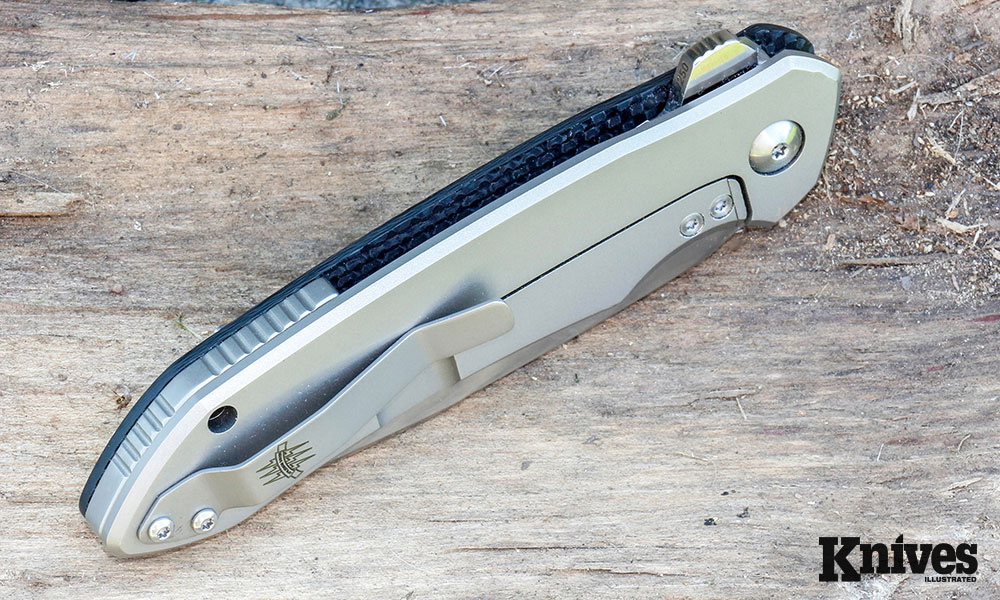 The Berlin Strike from Attleboro Knives features a ball-bearing pivot and a flipper positioned for one-handed opening with the index finger of either hand.

The frame of the Berlin Strike is titanium with a grayish black carbon fiber scale on one side. The pocket clip comes positioned for tip-up carry on the frame lock side of the handle, but it’s reversible. And don’t worry about dumping your toolbox to find the right tool. A T6 Torx wrench is included for that task. A finger groove with jimping is provided to enhance your grip on the knife, and there’s jimping on the blade spine and spacer at the back of the handle too. 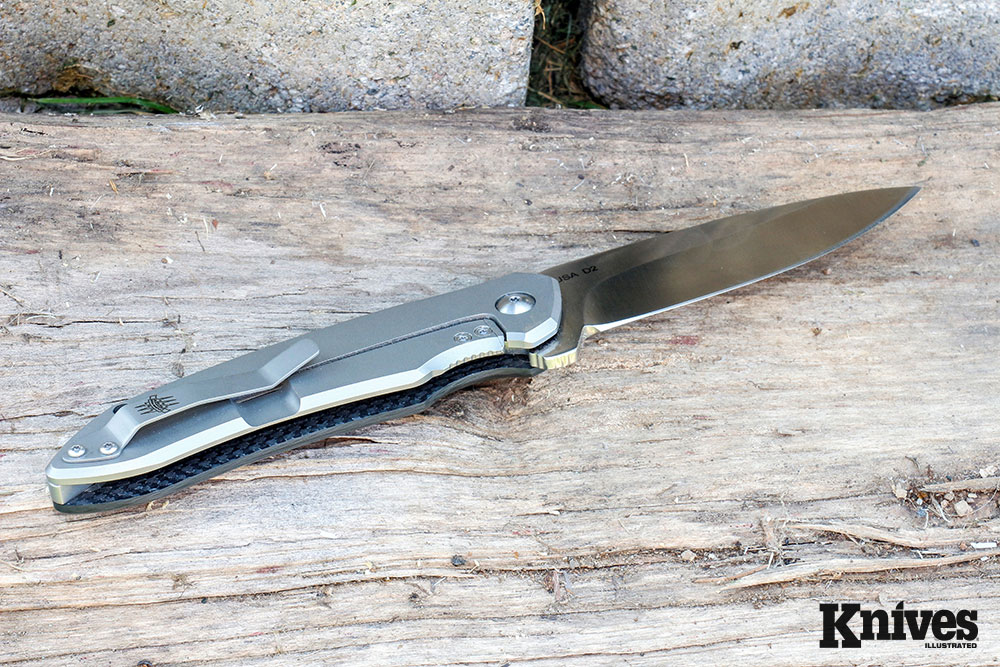 The simple frame lock on the Berlin Strike provides a good amount of reliable engagement with the blade tang for secure lockup. The pocket clip is reversible for tip-up carry.

Also included with the knife is your choice of either a waterproof phone case or utility case. Both cases come with a carabiner and are felt-lined inside with foam padded ends. My knife came with the utility case that I think would make a good container for a survival kit for either urban or wilderness applications.

The Berlin Strike has a titanium frame and a carbon fiber handle scale.

The Berlin Strike knife memorializes those who helped to defend our freedoms through the Cold War years with much of the focus being on the occupied city of Berlin. The city was divided with Western powers on the west and the Soviet Union on the east. The Berlin Strike fits the hand well. It measures 8 ¼ inches overall when open and 4 ¾ inches closed.

There’s a personal connection too, as Attleboro owner Ken Hunt was assigned to the American Sector of West Berlin beginning in November 1988 as a second lieutenant rifle platoon leader in Bravo Company, 5th Battalion, 502nd Infantry, Berlin Brigade. He took part in training maneuvers while there and was on hand when the Berlin Wall fell on Nov. 9, 1989. 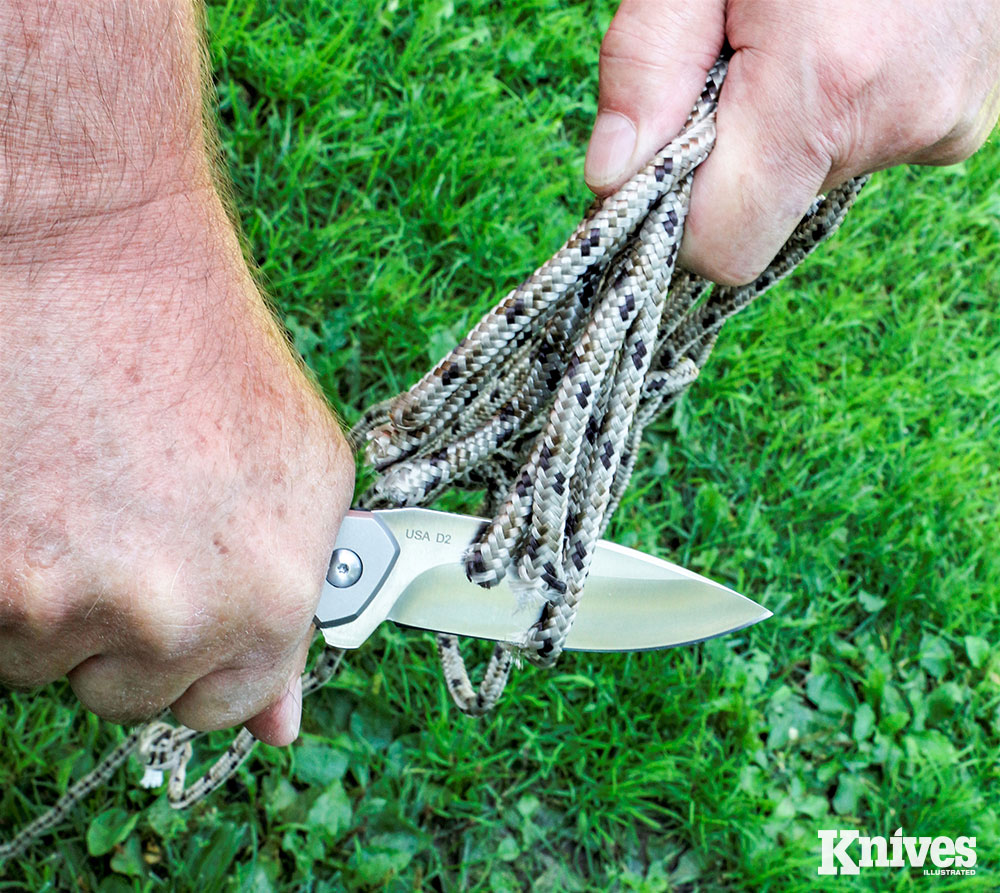 The Berlin Strike has excellent ergonomics for likely types of everyday cutting chores.

I’m going to make use of the Gramps as a camp knife and travel utensil. And I’m sure the Berlin Strike will find a regular home in a pants pocket for daily general use. Attleboro Knives offers other models too. Its Caribou Mountain Hunter and Skinner fixed blades are great designs for outdoorsmen, and its Dau Tranh is a skeletonized neck knife. We will be running a review of the company’s signature Attleboro knife, geared toward tactical and military use, in an upcoming issue.

Naturally, all these models have stories of their own, which makes for enjoyable reading on the company’s website.