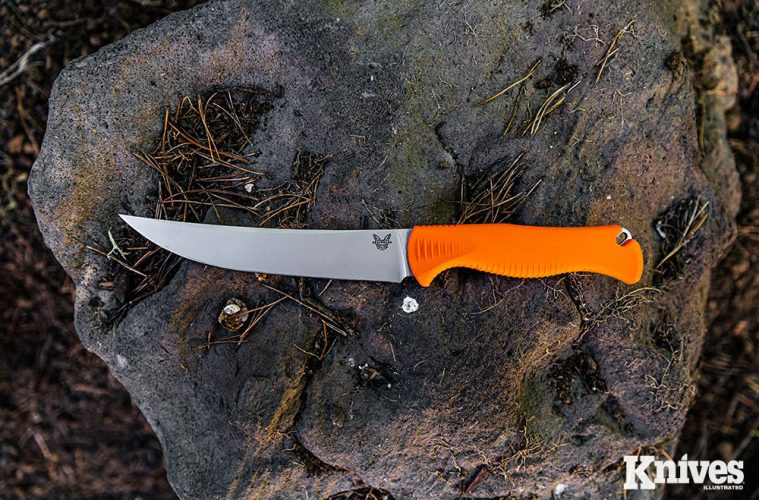 BENCHMADE MEATCRAFTER: FROM FIELD TO FORK

TESTING THE BENCHMADE MEATCRAFTER IN AND OUT OF THE KITCHEN

Every outdoorsman and outdoorswoman know the value of a good knife. The same thing goes for every cook and chef. Whether we’re processing kindling or slicing meat, a sharp blade is a tool that sees frequent use.

However, not all knives work equally well in both environments. A thick Scandi blade might work great for wood carving, but it isn’t going to do nearly as well with thinly slicing potatoes for frying.

Conversely, your favorite chef’s knife isn’t going to be fun to use to split wood or whittle a figure-four deadfall trigger.

“The plain-edge blade is thin…and… has a bit of flexibility, landing somewhere between a boning knife and a fillet knife. It has a trailing point profile terminating in a very sharp point.” 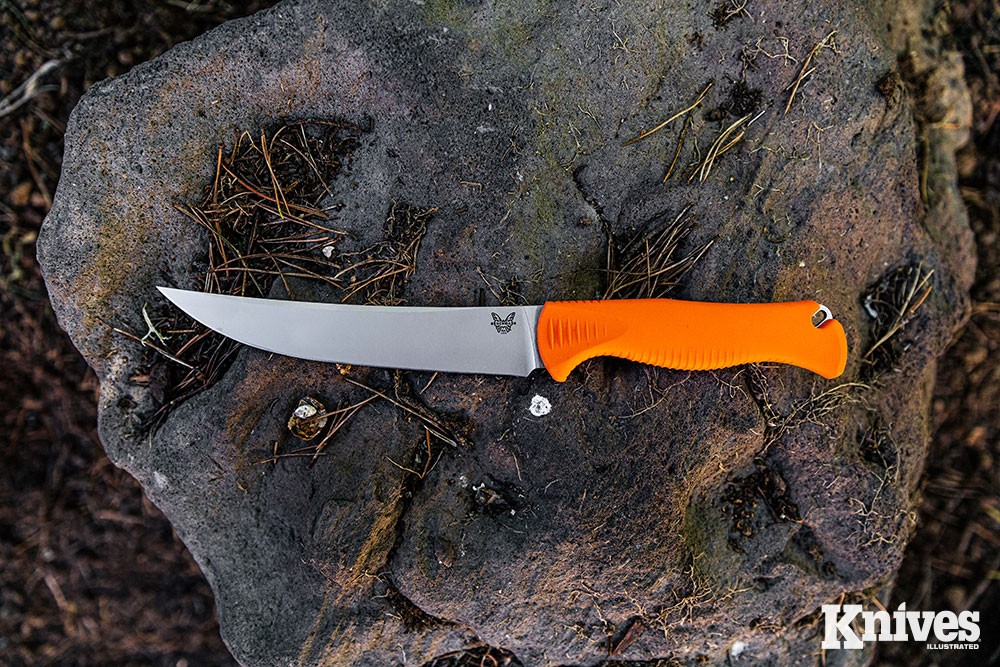 The Meatcrafter, with long, thin trailing-point blade and grippy handle, can work equally well in the field or in the kitchen. Benchmade photo.

From the moment Benchmade announced the introduction of the Meatcrafter, I was eager to get my hands on it. I’m the cook in our family, a role I mostly enjoy. As such, I’m always cutting, chopping, and slicing food, from fresh vegetables to roasts.

Benchmade has long been known for reliable knives built for real world use in the field. Whether fixed blades or folders, its product line is deep with dependability. With its Meatcrafter model, it is bridging the gap between wilderness and kitchen, which is right in my wheelhouse.

The very first thing I noticed about the Meatcrafter was the handle. The orange Santoprene material is a thermoplastic elastomer, sort of a kissing cousin to rubber in terms of feel and performance. In this application, it provides a tremendously comfortable grip on the knife.

There are ridges along the contoured bottom side of the handle as well as near the molded guard for added traction. Honestly, I don’t know that they’re truly needed as the Santoprene has enough grip all on its own.

Truth be told, the knife handle feels almost sticky, but not uncomfortably so. It’s more along the lines of having full confidence that this knife isn’t going anywhere once you have it in your grasp. 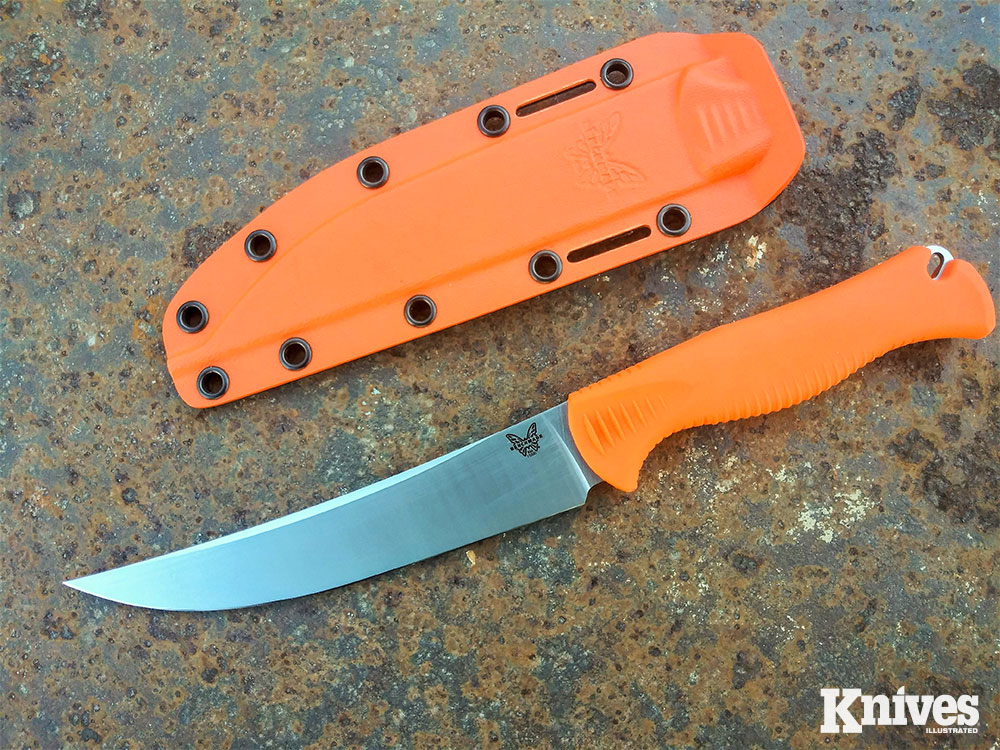 The sheath doesn’t have a proper belt loop, but it does have eyelets and slots that can be used to lash the sheath to a pack or other location.

I have big hands and knife handles are sometimes problematic as a result, but there were no such issues with the Meatcrafter. The handle is slim, about 5/8-inch thick at the widest point of the palm swell, but there’s still plenty of real estate for a firm, solid grip.

The plain-edge blade is thin, 0.09-inch to be precise, and stretches just a hair longer than 6 inches. It also has a bit of flexibility, landing somewhere between a boning knife and a fillet knife.

It has a trailing point profile terminating in a very sharp point. The CPM-154 steel has a bead blasted finish, giving it a handsome appearance.

Between the slender silhouette and the almost featherlike 3.24-ounce weight, the Meatcrafter is very quick in the hand. It arrived hair-popping sharp, with no need for touching up prior to use. 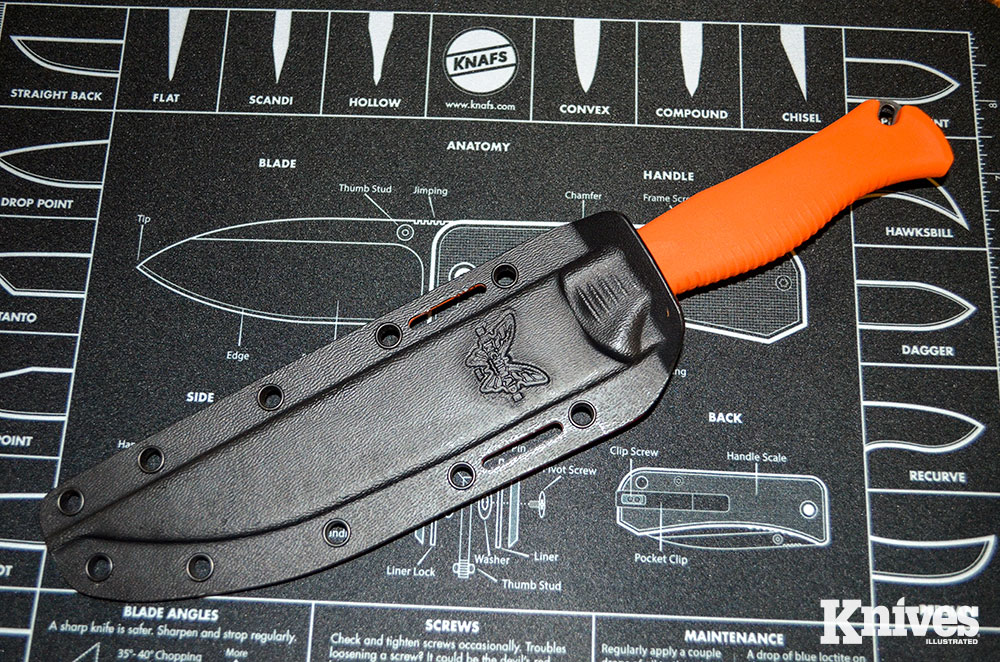 The sheath is two-toned: black on one side and bright orange on the other.

The sheath is two-tone, black on one side and orange on the other. It is a plastic material that feels similar to Kydex, but with a little bit of flex to it. Also, it lacks an actual belt loop, but it does have slots on either side that could be used to thread the sheath onto a thin belt.

It does have several eyelets that can be used to lash the sheath to a pack or something, if desired. The knife snaps into place securely but can be pulled easily from it when needed.

Because the Meatcrafter is designed to be both a kitchen and a field knife, I wanted to do some testing with a range of materials, food and otherwise. 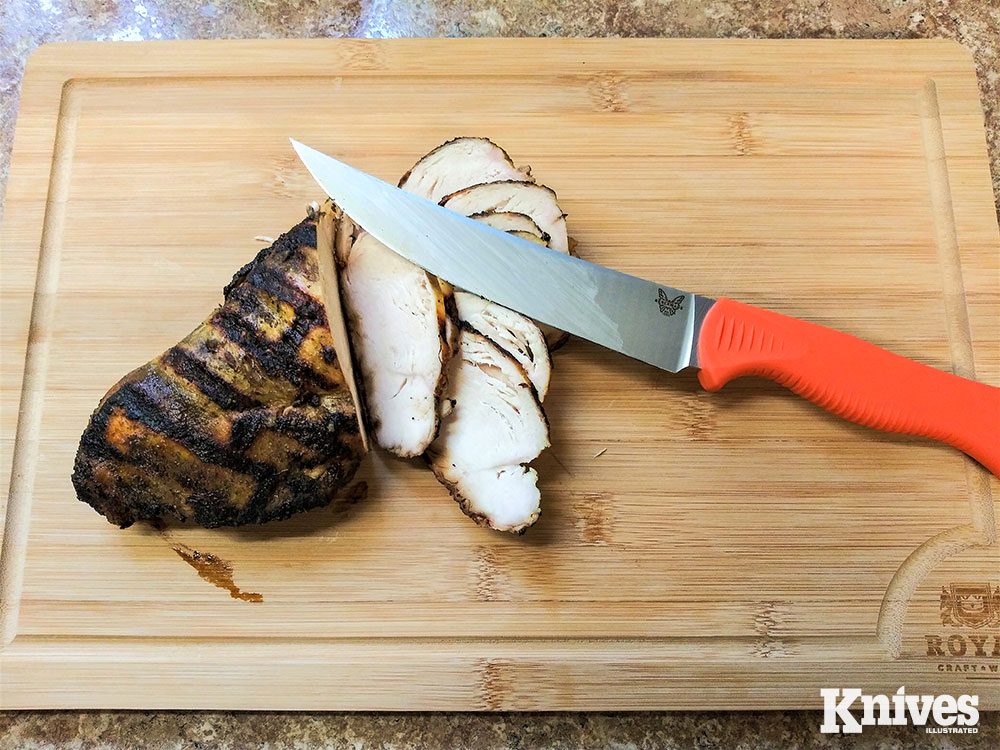 Slicing a cooked and chilled chicken breast was made ridiculously easy with the Meatcrafter. The Santoprene has plenty of traction for a solid grip, even without the added ridges.

I’m not one for torture-testing knives. I don’t need to know if I can pound it through a cinderblock and then carve a delicate flower from a cucumber without so much as stropping the edge.

We had a couple of leftover grilled chicken breasts in the refrigerator, so they were the first to go under the knife. Given the thinness of the blade, I shouldn’t have been surprised at the precision of the knife’s slicing ability.

Each cut was like using a laser and I was able to make very thin slices over and over. Yes, the chicken was just as tasty as it looks, too.

Not content with just the chicken, I grabbed a green pepper and a couple of carrots. The Meatcrafter slid through the pepper cleanly, while the thin point worked great at picking out the few leftover seeds.

This knife is a bit longer than the ones I normally use to process fresh veggies, but it handled very well and wasn’t cumbersome or awkward in the least. I sliced the pepper into strips for use on salads later in the day and it took mere seconds to finish.

After peeling the carrots, I sliced them into sticks, then used a pinch grip on the knife to chop them up. The knife handled like a dream and made short work of this task. The chopped carrots will go into homemade fried rice.

Worth noting is that the vegetables were rinsed and thus my hands were wet during this part of the testing. Yet, there were no problems with traction or grip and the knife never wavered in my hand.

I always say that those who do knife reviews can often be identified by the boxes of oddball items they keep around, strictly to be cut and sliced to ribbons at some point. From my box of junk, I grabbed a leather belt I picked up at a thrift store a while back.

The knife’s edge sliced cleanly through the leather several times, without a single drag. I then used push cuts and didn’t even have to rock the blade back and forth for the edge to cut through each time.

This material can often be a little troublesome for a knife. While the rubber is thick, it still has enough flex that a push cut won’t work well, at least not at first.

Instead, you have to slice a bit so the edge bites, then you can push through. More than once, I’ve had knives where I ended up having to drive the point into the rubber first, then work the edge around the hose.

With the Meatcrafter, there were no such problems at all. Just a slight dragging slice was all it took to get the cut going, then I was able to push down almost completely through the hose. A bit of back and forth slicing at the end finished the job. I repeated this a few times and from the first to the last, no issues.

This is a common test of a knife edge, but admittedly one that I’ve not entirely mastered. I can’t quite pull off the big, beautiful blossoms of wood curls some others routinely manage.

However, I can whittle and make shavings with the best of them, which is essentially the same thing, just the bits of wood don’t remain attached to the stick. As expected with such a razor-sharp blade, the Meatcrafter did great with this chore.

The only issue I had was that the knife at first would bite a bit deeper into the wood than I liked, simply because I wasn’t quite accustomed to using the thin edge on this dense material.

What I truly love about the Meatcrafter is how well it handles. No matter what material was used, the knife didn’t just slice and dice without fail. It did so incredibly comfortably. The ergonomics of the knife are outstanding.

“What I truly love about the Meatcrafter is how well it handles…The ergonomics of the knife are outstanding.” 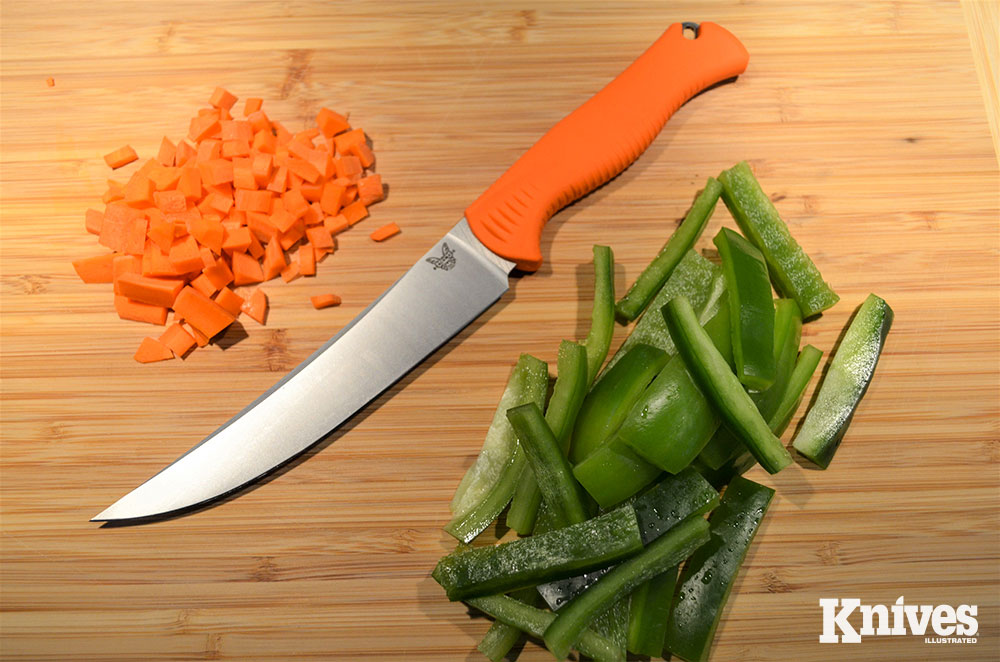 Whether slicing or chopping vegetables, the knife performed flawlessly, making it a desirable addition to any kitchen.

The light weight combined with the thin blade make it easy to use for considerable lengths of time without being tiring.

The knife is incredibly agile and was able to work into tight spaces, such as the interior of a green pepper, without any trouble at all, despite the lengthy blade. 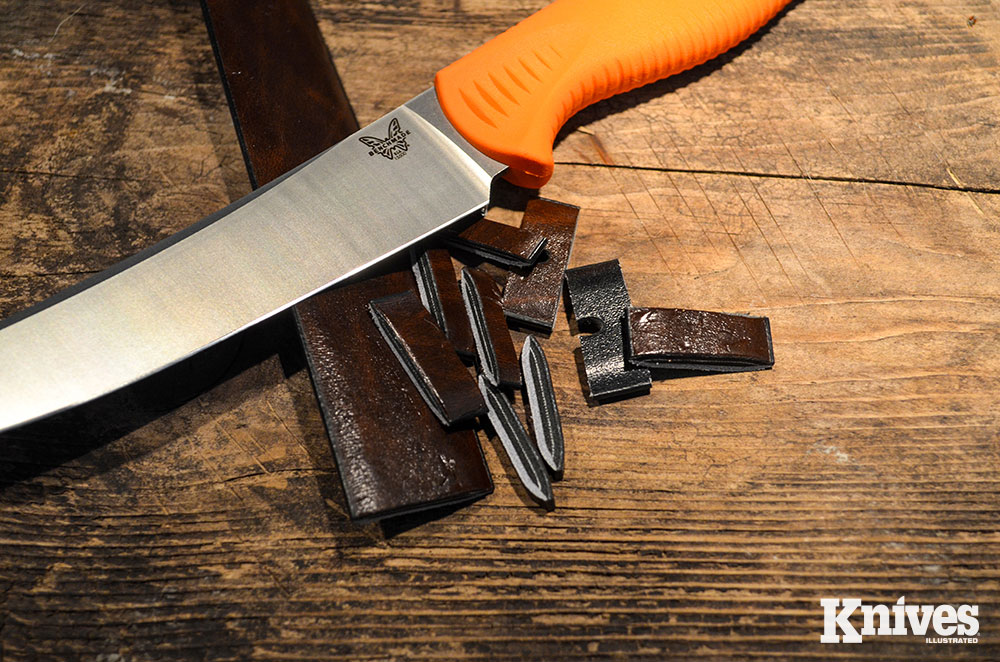 From slicing to push cuts, the Meatcrafter made short work of a thick leather belt. 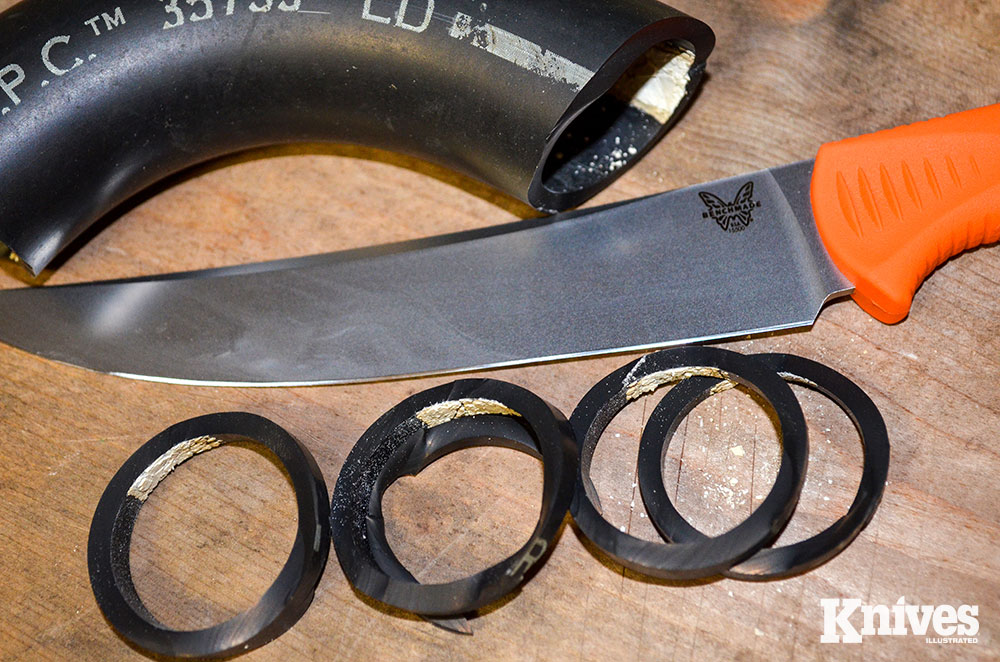 Rubber hose, with a layer of mineral deposit running through the inside, was no match for the Meatcrafter.

Overall, the Meatcrafter is definitely a worthy addition to the kitchen. It can easily pull double duty as a field knife as well and transition between the two environments with ease.

The bright orange handle and sheath make it easy to spot, whether it is in your pack or the kitchen drawer. This one is highly recommended.

The Meatcrafter is equipped with the Benchmade SelectEdge technology. The edge is 14 degrees on a side, 28 degrees inclusive. The idea behind this design was to provide for a fine, sharp edge that is particularly good with push cuts. Benchmade has said that this edge is the sharpest in its product line to date.

To maintain the edge, the company has a few suggestions: In the field, carry a ceramic rod and a leather strop to touch up the blade between uses. At home, use a WorkSharp guided sharpening system along with a leather strop.

LifeSharp Service: Benchmade offers lifetime sharpening, oiling, and similar services to all of its customers. According to its website, it is running about a two-week turnaround. Find all of the details on this service at  www.benchmade.com/lifesharp-service/.