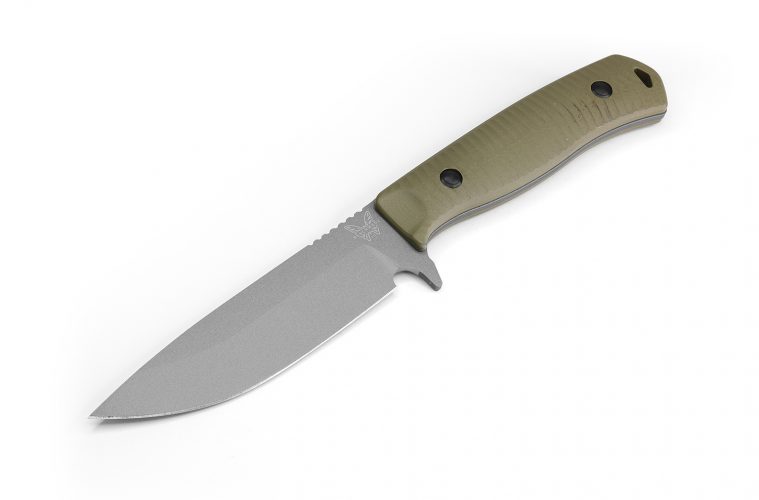 Benchmade New Models Offer Something For Everyone

I just got a peek at some of the Benchmade new models for 2022 and I like what I’m seeing so far. Whatever your primary uses for a knife might be, you’ll probably find something to suit your needs in this lineup.

Among Benchmade’s offerings will be an out-the-front auto called the Shootout, a new version of the stout Claymore auto, and a grippy EDC/tactical knife called the Redoubt. Also on the horizon are the fixed-blade Anonimus survival/bushcraft knife, Taggedout hunting folder, casual carry Weekender, and a new version of the Meatcrafter hunting/camp/kitchen knife.

Shootout Should Be a Favorite of Benchmade New Models

I’m guessing Benchmade’s new Shootout will be an instant, sought-after success. This is an out-the-front automatic opener with a highly textured carbon fiber-filled nylon handle with a glass breaker on the end. It will have a 3.51-inch tanto blade of CPM CruWear steel with a flat earth PVD finish. It’s expected to ship in February and will have an MSRP of $300. 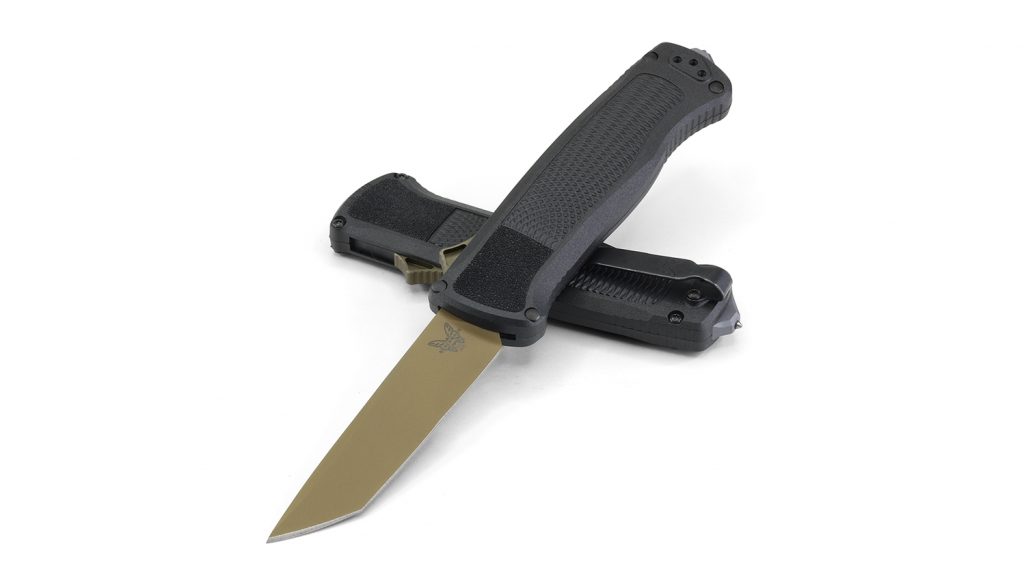 The Benchmade Shootout is an out-the-front automatic knife.

First responders and EDC enthusiasts should find the Redoubt to their liking. This Benchmade Black Class folder features a 3.55-inch partially serrated drop-point blade of CPM D2 steel with a black Cerakote finish. Measuring 4.75 inches closed, the most distinct thing about the Redoubt is its grippy handle that’s Overland Gray with a Forest Green rubbery Grivory over-molded section that should provide for a sure-handed hold on the knife in extreme conditions. The Redoubt should be available sometime this month for a suggested $180 retail price.

The Redoubt has grippy Grivory overmolding.

It’s never been only about EDC with Benchmade. As an example, the new Anonimus is aimed at the survival/bushcraft set. This fixed blade measures 9.83 inches overall with its 5-inch blade and 4.83-inch handle. The plain-edge, drop-point blade is made of CPM CruWear steel with a Tungsten Green Cerakote finish. The choil is configured for use as a ferro rod striker. There’s an integral finger guard as well. The handle scales over the full tang are OD Green G10. The included Boltaron sheath features a loop to store a ferro rod on board. This knife should be available this month with an MSRP of $290.

The Annonimus is a survival/bushcraft knife with a 5-inch blade.

If you’re a hunter or adventurer who likes to trek far from the beaten path, you have to take a look at the Taggedout. This lightweight, high visibility folder was designed with far country hunters in mind, but others will appreciate its features as well. The knife features a 3.5-inch clip blade of CPM-154 steel with a satin finish. The handle is orange Grivory with aluminum spacers. It draws inspiration from another lightweight Benchmade favorite, the Bugout. The Taggedout weighs just 2.1 ounces. The MSRP will be $190 and it’s expected to be available in July.

The Taggedout is a lightweight folding hunter you’re not likely to lose.

When it comes right down to admitting it, most knife use isn’t for defense, for gutting a deer or for surviving the end of the world as we know it. For casual carry and chores, the Weekender is a Benchmade new model that might fit your lifestyle. This folder features to cutting blades: a 2.97-inch clip blade and a 1.97-inch drop-point blade. It also features a bottle opener. All three tools are slip joints. The steel is CPM S30V stainless. The Weekender will be available with either a gray G10 or OD Micarta handle. The MSRP will be $250 and it’s expected to be available in April.

The Weekender is a slip-joint knife with two blades and a bottle opener.

Another Claymore is Always a Good Thing

The Claymore was an instant hit when Benchmade introduced it. The latest version, by popular demand, will have a plain-edge blade instead of a partially serrated one. The Claymore is a push-button automatic with safety switch. The blade steel is D2 and the handle, either black or Ranger Green, features Grivory inlays over stainless steel. The MSRP of the latest Claymore will be $230 and it should be available this month. 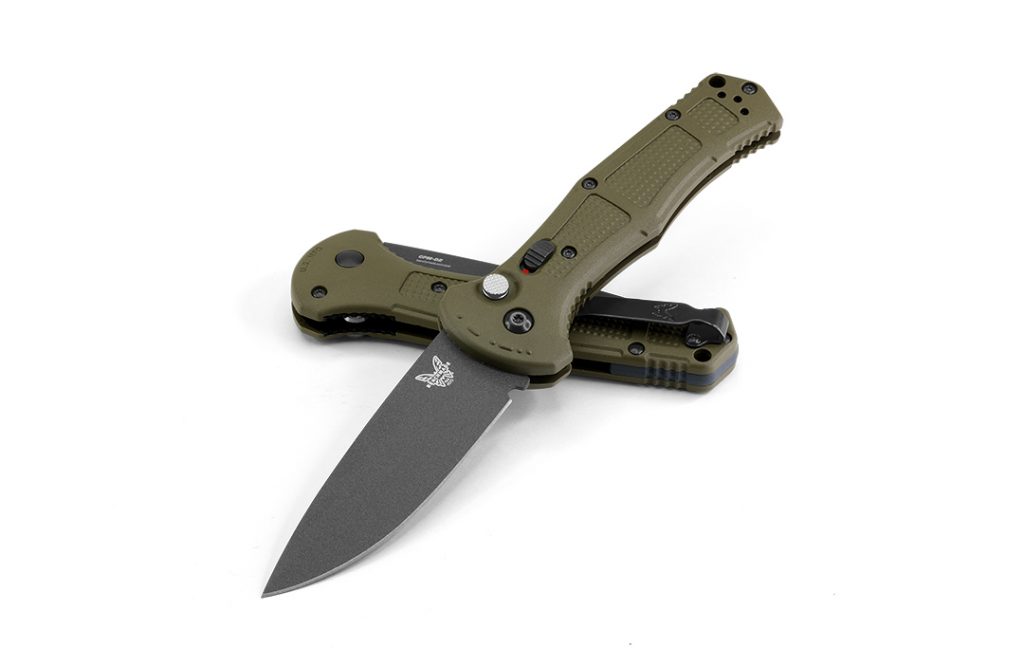 The latest version of the Benchmade Claymore automatic features a plain-edge blade.

This Meatcrafter Has a Distinct Look

The Meatcrafter is a knife that can fill several roles. With its thin, narrow 6-inch trailing point boning knife type of blade, it can be a game knife, camp knife or kitchen knife. Earlier versions leaned either to the camp or kitchen side. The Benchmade new model Meatcrafter for 2022 fits in the company’s Hunt Series of knives and features carbon fiber handle scales and an orange Cerakote finish over the CPM S45VN steel. The Boltaron sheath is orange and black. This Meatcrafter will sell for a suggested retail price of $400.

For more information on these Benchmade new models, go to www.Benchmade.com. And be sure to check back with KnivesIllustrated.com for more of the latest news from the knife industry. 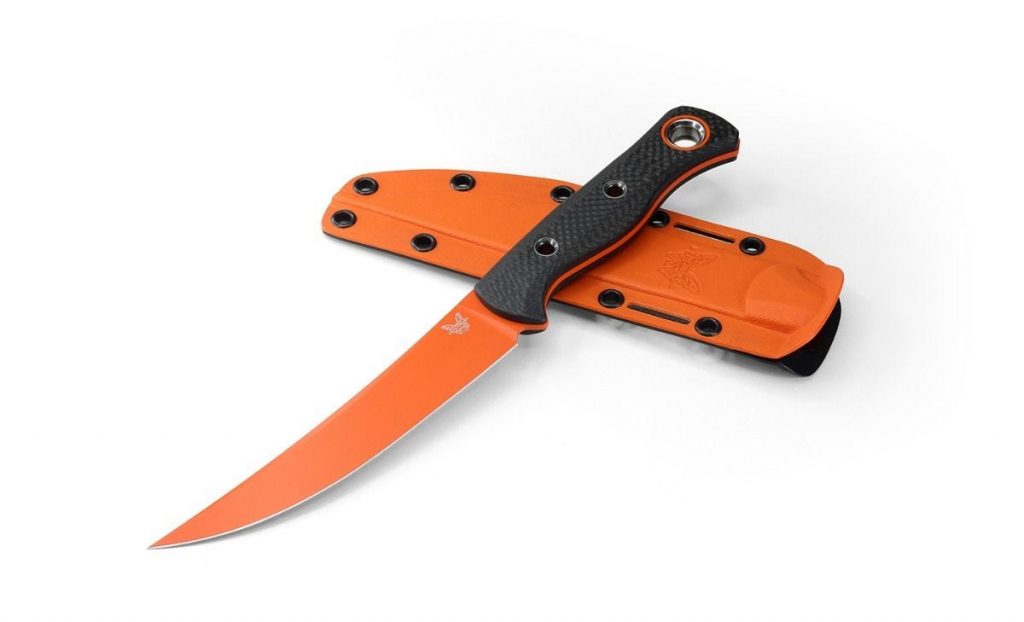 The latest version of the Meatcrafter features a carbon fiber handle and a blade with an orange Cerakote finish.