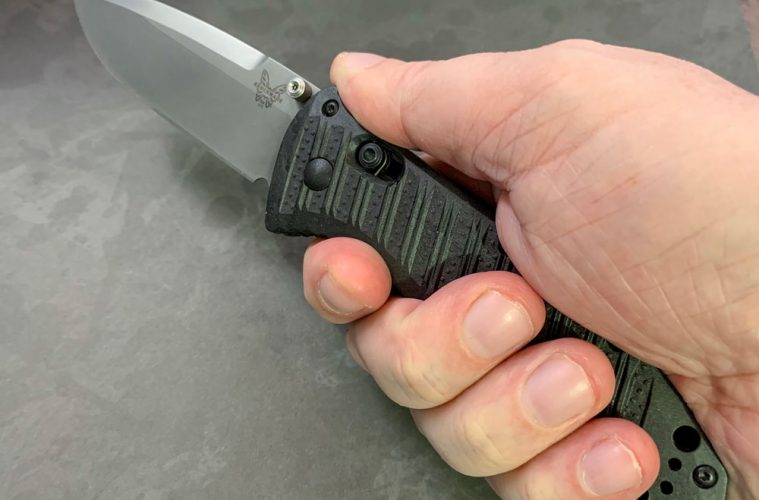 Is Benchmade’s Black Class worth the price? To answer this question, this “Blue Class” guy is going to take a close look at the new release from the company’s Black Class, which is intended for tactical users and first responders: the Benchmade Presidio II CF Elite.

To say Benchmade is a staple of the folding pocketknife market is an understatement among understatements. Everyone—from general users to enthusiasts to collectors to law enforcement and military—knows what a Benchmade is.

Benchmade has split its catalog into three “classes.” The Blue Class features the knives that we’ve all grown to know and love such as the 940, the Griptilian and, more recently, the Bugout. The Gold Class is made up of upscale versions of other models.

The Presidio II CF looks and feels much pricier than it is.

The Black Class is tactical. One standout from this class over the last few years has been the Presidio II. It comes in several different versions, including coated or uncoated blades, a large standard size, a mini, and even automatic variants.

One constant of all of them has been the heavily milled aluminum handles. They were very grippy and definitely looked pretty cool, but they made the knife heavy and a bit pricey.

The Presidio II in all of its forms retailed for well north of $200 and a large manual version weighed in at a pretty hefty 6.1 ounces for its 3.7 inches of  blade length.

Black Class Lightens Up for 2020

For 2020, Benchmade introduced the new “CF Elite” handle material for its extremely popular Bugout model. CF Elite is a carbonreinforced nylon polymer that claims to be 17% lighter and 50% stronger than the “Grivory” nylon handles that have been a constant presence on Benchmade’s knives for many, many years.

Given that Grivory was already lighter than aluminum and CF Elite is much less expensive to work with, putting on a new lighter and cheaper Presidio II was a natural fit. 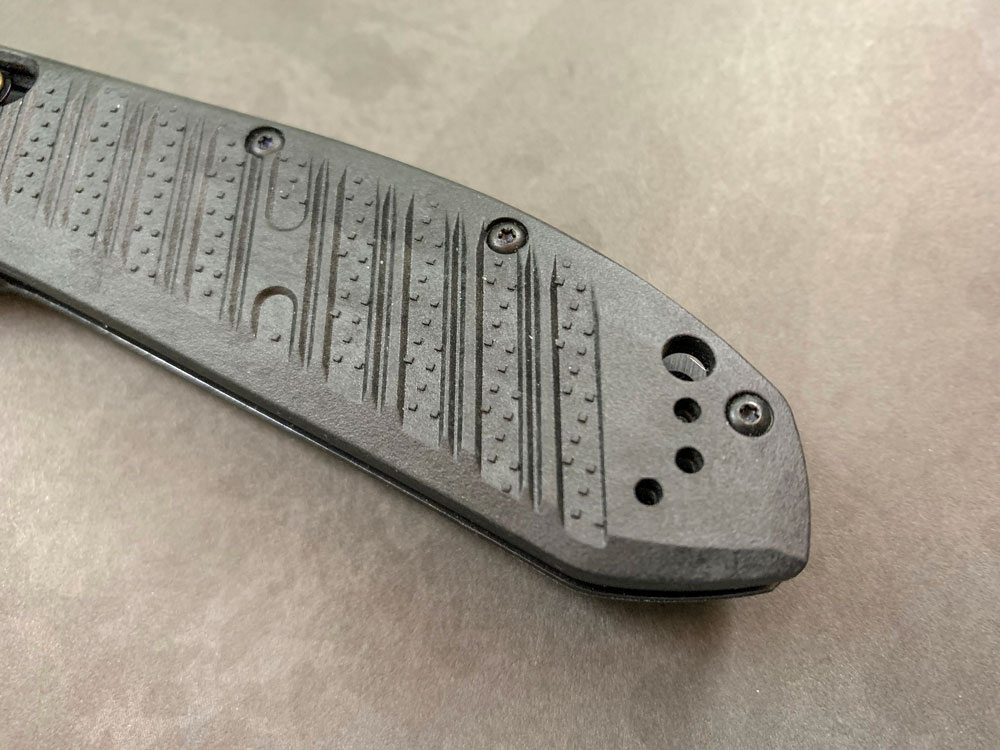 The CF Elite scales have a look that is much closer to carbon fiber than it is to FRN or GFN.

The new Presidio II CF Elite (570-1) comes in the usual combinations of a satin or coated blade, with or without serrations, and in large (3.72-inch blade) or mini (3.2-inch) sizes. In the large full-size form, it weighs well over an ounce, less than its predecessor, and MSRPs for just $155.

With street prices being more in the $130 range, it’s truly a great value. The automatic versions of the Presidio II are soldiering on with the aluminum handles and old pricing for the time being.

At the time of writing, the mini Presidio II was not yet available so this review will solely be of the larger 550-1 version with a satin, plain edge blade.

The looks have also changed a bit from the older version. The signature diagonal milling is still somewhat replicated but in a less extreme way.

You can see the design cues. And if you’ve ever seen one before, you’ll know immediately that you’re looking at a Presidio. The general handle and blade shape are also identical to the previous Presidio. 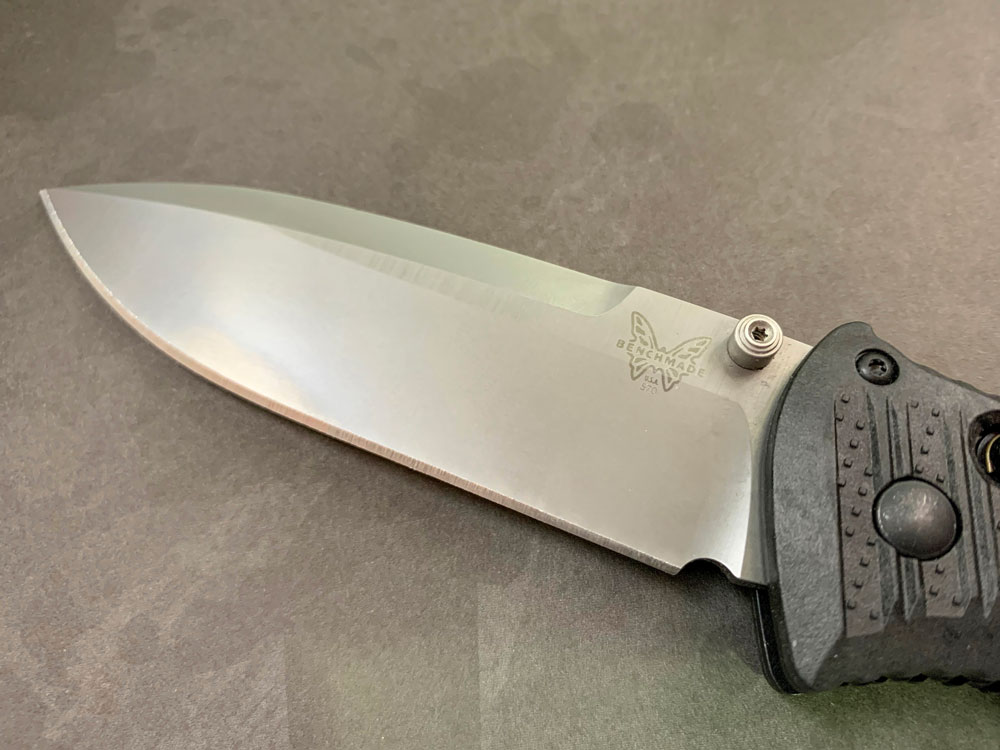 If you were worried that largely nylon-based handles were going to look cheap, don’t. While it’s ostensibly the same handle material as what you get on the Bugout CF Elite, it looks much more premium on the Presidio II. It doesn’t look like carbon fiber exactly, but it doesn’t look like “fancy plastic” either.

In my mountain bike racing days of the late ’90s, the whole industry was going wild over thermoplastic frames and frame parts. The look of the Presidio II CF Elite actually reminds me a lot of that material.

The Presidio II’s well-loved grippy feel hasn’t been reduced either. The reduced depth of the angular grooves is more than made up for by a series of small dots.

There is also ample jimping on both the upper and lower spine of the blade, up near the faux hilt. With gloves or without, wet or dry… this knife isn’t going anywhere in your hands.

And it’s comfortable, too! I never found the aluminum Presidio to be horribly uncomfortable, but it was far from my favorite. The 550-1 is a much more comfortable knife in the hand. It fills the hand very nicely, there are zero hot spots, and you can’t feel the standard deep carry pocket clip in your hand at all.

The aluminum handles felt more optimized for gloves than was probably necessary, whereas the CF Elite scales feel good with or without gloves.

Another complaint that some people (myself included) had about the aluminum Presidio II:  getting it in and out of the pocket. Both the new version and the original have a smooth landing spot for the pocket clip, so neither are exactly pocket destroyers.

However, the older one did occasionally catch a bit, especially when removing the knife. The CF Elite isn’t as easy as a knife with totally smooth scales, but it is far from objectionable and a more than worthwhile sacrifice for the grip it provides when actually using the knife.

Once it’s in the pocket, the Presidio II CF Elite carries shockingly well. It’s a big knife, but that reduction in weight is very noticeable in comparison to its predecessor.

It’s also still pretty easy to get your hand past once it’s in your pocket to reach other items you may have in there. In daily carry, it doesn’t feel dramatically larger than something like a full-size Griptilian. 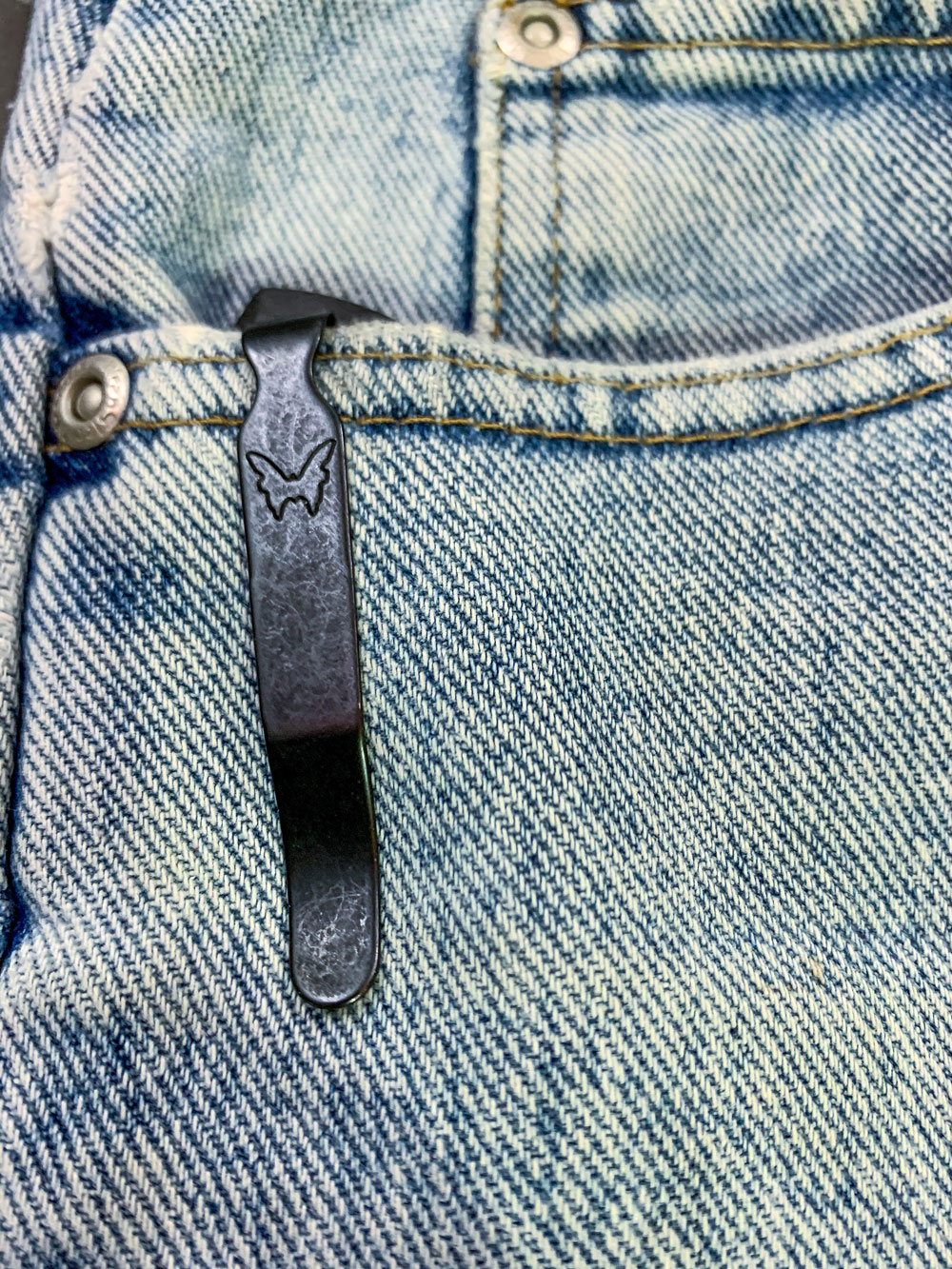 For such a large knife, the Presidio II CF Elite carries very well.

For a tactical or hard use blade, the Presidio has always had some rather thin blade stock. At 0.12 inch, it’s much thinner than what you often see on something like a Hinderer or a Zero Tolerance.

For people like me who will use this more for EDC, that’s a welcome change. It’s fairly thin behind the edge (about 20 thousandths of an inch), and the very high, flat grind makes it an excellent slicer.

However, I can see how people may appreciate a thicker blade stock and the more robust tip that would provide in harder use situations.

The action on the Presidio II CF Elite is just what you’d expect from Benchmade. That means… it’s a blast. If there’s one thing the Axis lock gets right, it’s the “fidget factor.”

There’s a reason that omega spring style locks have become so prevalent now that Benchmade’s patent has expired. They’re just fun. You can open the Presidio with the thumbstuds, you can middle-finger flick it, or just activate the lock and wrist flick it out. And when it comes time to close it, the Presidio II drops like the proverbial guillotine if you want it to.

That said, the Axis lock also allows you to slow that drop if you want to by simply adjusting how far you pull the lock back.

Also of note: Benchmade’s lifetime warranty. I’ve had to use the warranty on a couple of occasions, and the company has been quick to take care of any problem I’ve had, no questions asked. I’ve also taken advantage of its Eversharp lifetime sharpening service once, just to see how it worked. I prefer to service my own knives, but for those who don’t, knowing that you can get a free sharpening, cleaning, and lubrication for free whenever you need it is pretty confidence-inspiring.

Being more of a “Blue Class” guy than a “Black Class” guy, I have to say that overall, I’m very impressed with the Presidio II CF Elite. First of all, it’s a great value. Also, I honestly thought that I’d spend a bit of time with the full-size version, then pass it along for something smaller like I did with the original. (I sold my aluminum Presidio II in favor of a Griptilian.) I kind of planned on selling this one and getting a mini Presidio II. But after having it in my pocket for the last couple of weeks… I think it’s a keeper as it is.