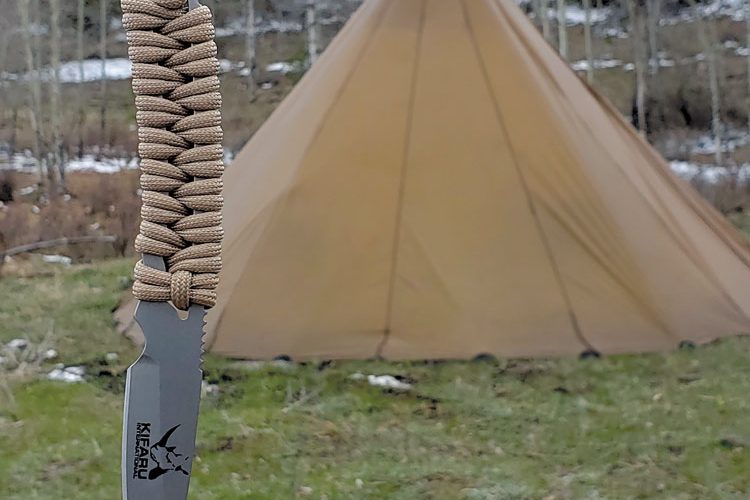 The Helium 1 by R&N Blades and Kifaru is Light in Weight, But Not a Lightweight Hunter

In the backpacking and distance hiking community, there’s an expression, “Ounces equal pounds.” Any additional weight on your back feels exponentially heavier, especially when there’s a lack of oxygen in the air. It’s in settings like this when the outdoorsman needs the lightest gear to save energy and help push him farther and faster. 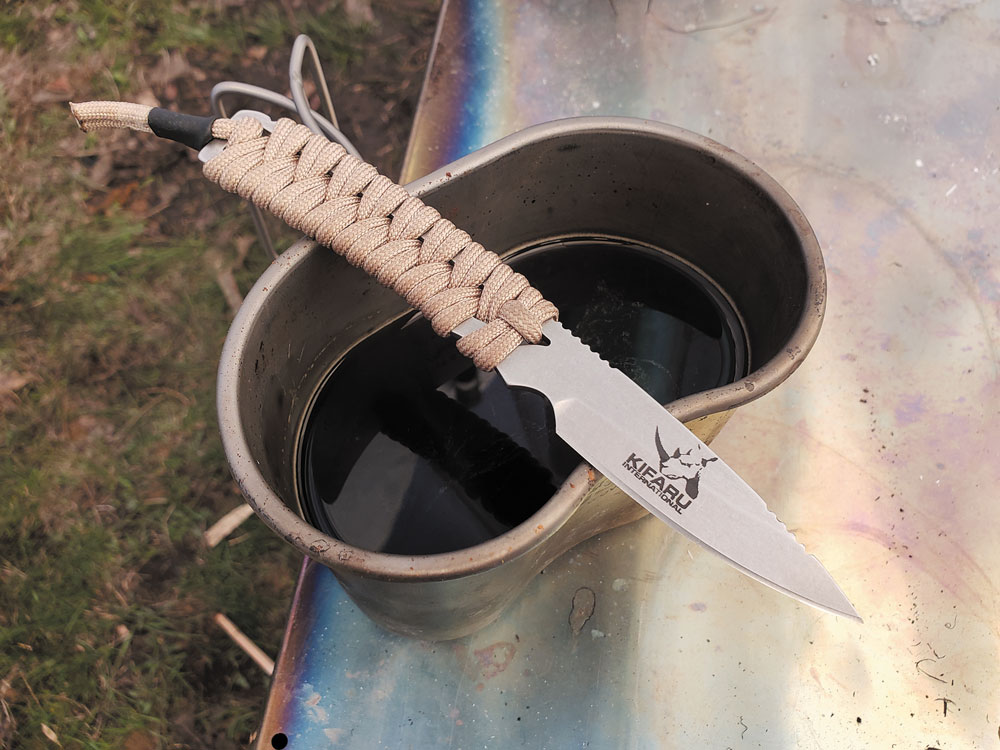 One item commonly accepted in a loadout, despite its weight, is a quality knife. But some knives won’t weigh you down, like the Helium 1 by Robert Herbert of R&N Blades. To test the Helium 1 as realistically as possible, we carried one above 9,000 feet into the high mountains of Colorado and used it around camp. We met up with our friends from Kifaru, the sole U.S. distributor, to see just how much knife we needed and whether it would slow us down.

According to the knife’s maker/designer Robert Herbert, a good knife “Should be light but strong, made out of the best material available, be able to clean a trout, dress a deer, complete camp tasks (opening packets and such), and be easily and quickly accessible by the user.” 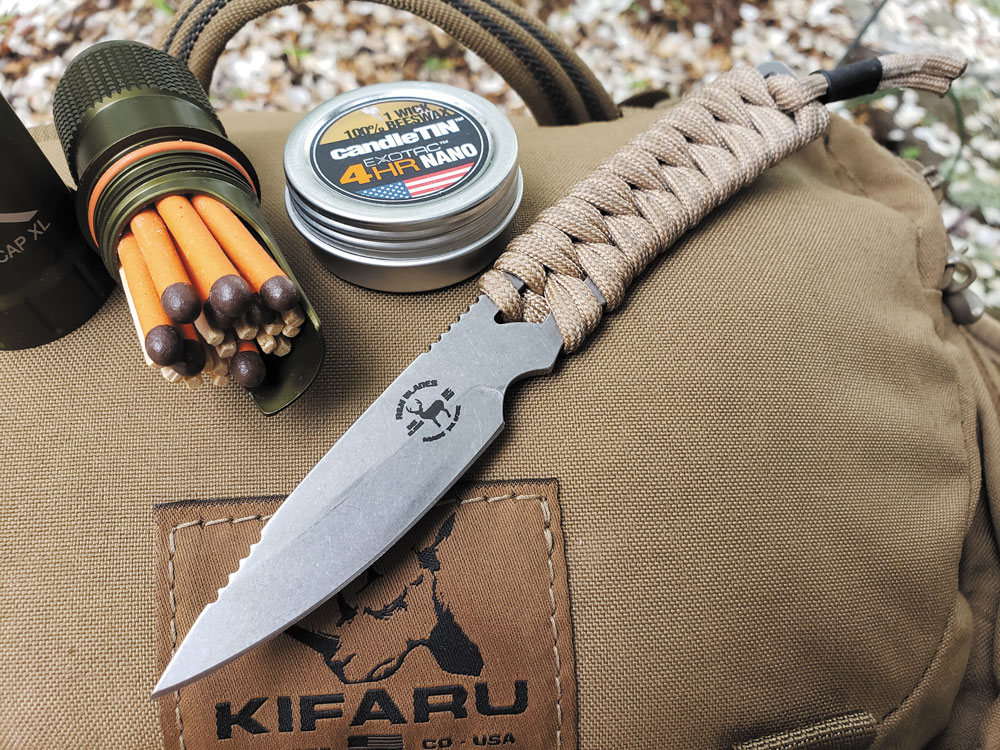 The relative size of the Helium 1 knife compared to storm matches and a candle tin.

Upon initial examination, the Helium 1 clearly fits the “light and strong” category at only 2.4 ounces with a paracord-wrapped handle and Kydex neck sheath. Made from S35VN steel, the Helium 1 is constructed of a steel known for a good blend of strength, durability, and rust resistance. R&N Blades stands by its products’ construction with an incredible lifetime guarantee that follows the knife. In over 10 years of knife making, only three knives have ever been returned. 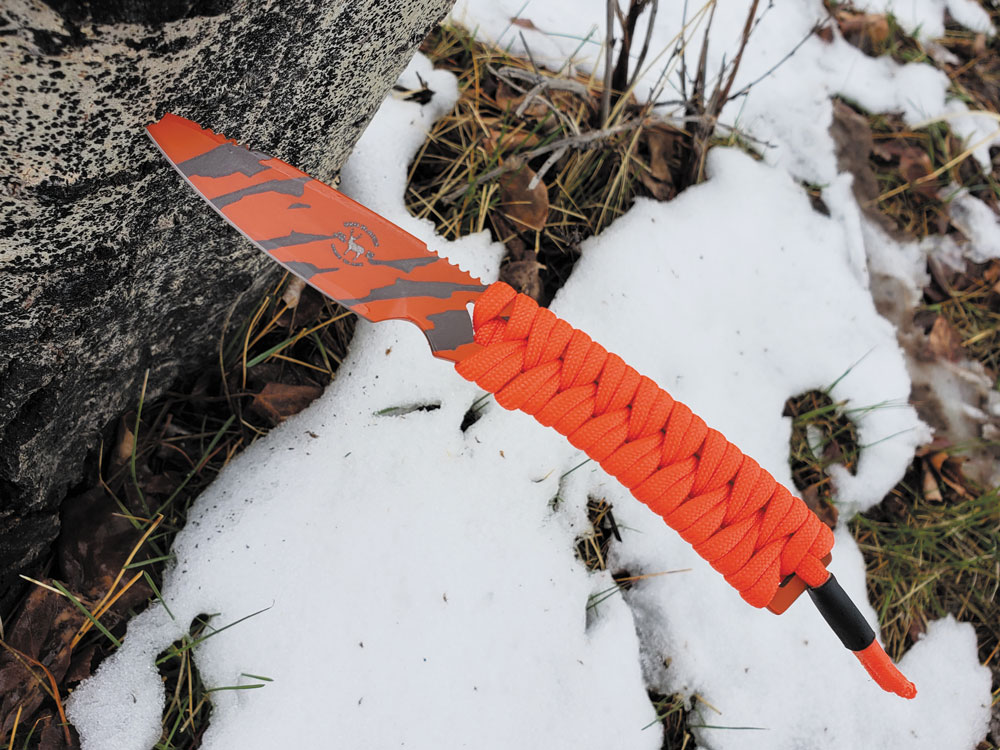 The paracord wrap on the Helium 1 handle can be removed in an emergency situation. You can replace it if it becomes too soiled.

At only 6.49 inches overall with 2.55 inches of the real estate taken up by the blade, the Helium 1 is not a heavy-duty knife meant for extended periods of carving. The instinctive pinch grip taken with the Helium 1 clearly defines it as a game-processing knife or personal-use blade for light camp tasks. The finger notches on the spine of the blade give the user better blade retention with a finger-extended gutting grip. Even the paracord-wrapped handle is meant to reduce weight, eliminating the need for heavier handle slabs or fastening bolts, and it can be easily replaced, should it become too stained or given too much character with game blood. Additionally, the paracord handle and neck lanyard can be used as emergency cordage if necessary.

Rather than using our sample around the house, we felt the only way to truly test out the Helium 1 was in the mountains. This is where CEO of Kifaru, Aron Snyder can often be found. According to Snyder,

“As a long-distance backpack hunter, I need every piece of gear in my pack to perform at a very high level. The Helium 1 knife does just that and it’s only adding an ounce of weight to my backpack. I’ve deboned and caped entire animals with the Helium without resharpening, and that’s what made this knife an easy choice for our lineup.” 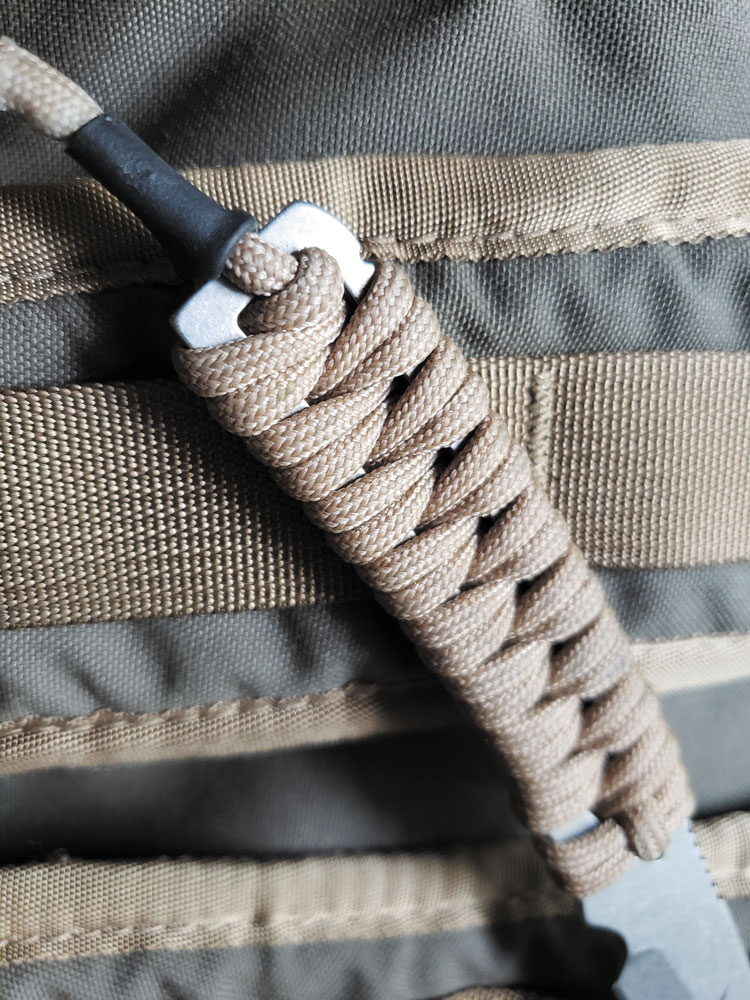 We didn’t have time on our side to pull a hunting license or the relevant tags, but we easily were able to acquire a fishing license for our time in Colorado. That said, we didn’t just sit around a pond with everyone else. Instead, we hiked deep into the mountains to a secret fishing spot of the Kifaru associates where there is thinner air than we’re used to. It was there we wore the Helium 1 on a backcountry fishing trek and used it for opening meal packets, cutting line, and taking the dirt out from under our nails. After a long hike and stopping to catch our breath more than a few times, we learned to appreciate the featherweight Helium 1 blade.

“IN OVER 10 YEARS OF KNIFE MAKING, ONLY THREE KNIVES HAVE EVER BEEN RETURNED.”

Back in camp, we used the Helium 1 to gut and process the brook trout we caught. While the blade wasn’t exposed to the blood for too long, the stainless showed no signs of staining. Blood soaked into the paracord, but it easily washed out. Speaking of paracord, 550-wrapped handles can cause blisters in larger blades used for heavier-duty tasks. We appreciated the more aggressive texture of the 550 cord on this knife as it provided a fair trade-off of texture and retention on a light-duty tool. 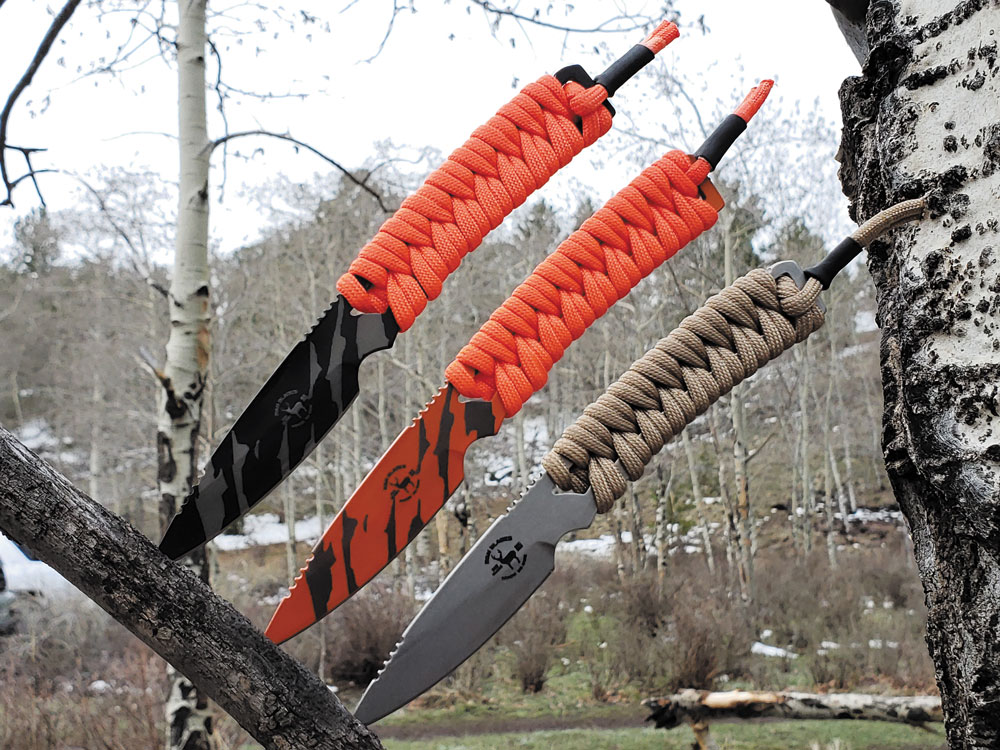 The Helium 1 is available in multiple color combinations.

The Helium 1 was also used for slicing the seasoned game meat shared in camp. Again, the salt in the seasoning did not impact the appearance of the steel. Make no mistake about it, this knife is more bird and trout than it is bushcraft, but we were still able to manage to make a few curls with it while testing out the edge.

We used the Helium 1 for all sorts of additional minor tasks when no other tool was handy. We used it to stir coffee, cut out rifle target groupings, and to scrape a ferro rod for fire starting inside the main camp tipi. The finger notches on the spine are not 90-degrees sharp, but they will allow it to be pressed into service with some efficiency. Worth noting is the rust resistance of the blade. The knife was not affected by the perspiration collected on the blade when worn around the neck and close to the body as we got quite the workout in the hills.

“THE INSTINCTIVE PINCH GRIP TAKEN WITH THE HELIUM 1 CLEARLY DEFINES IT AS A GAME-PROCESSING KNIFE OR PERSONALUSE BLADE FOR LIGHT CAMP TASKS.” 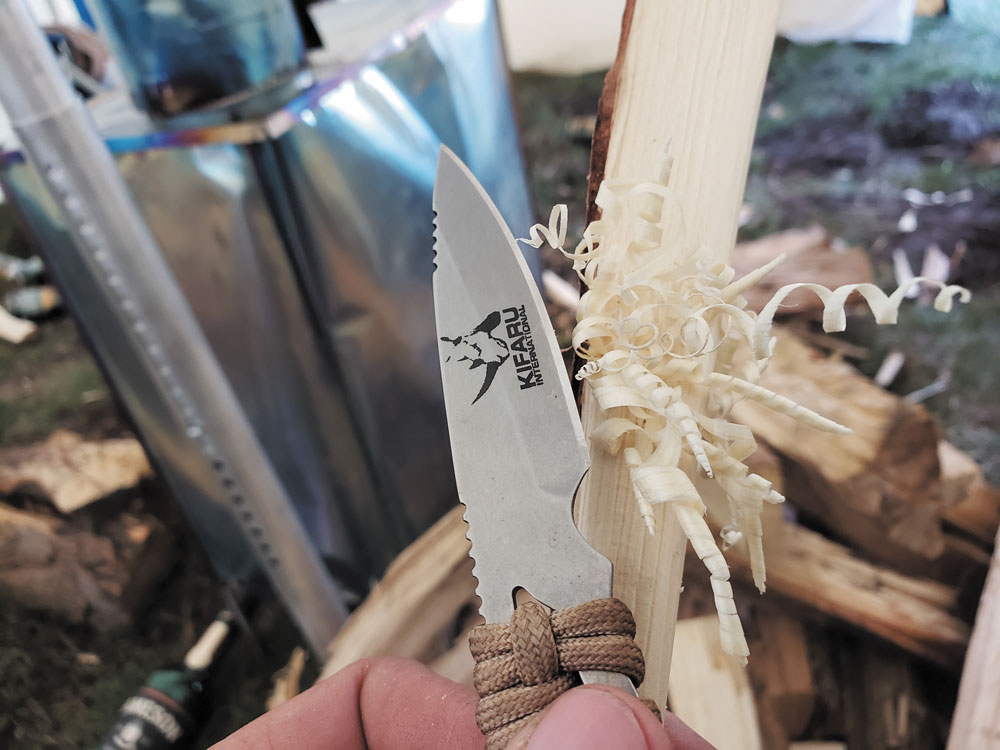 Designed more for game processing than bushcraft, the Helium 1 can still feather a stick while weathering a storm inside a heated Kifaru shelter.

Sharpening the Helium 1 is a task best reserved for a good diamond stone like the DC3 by Fallkniven, or an even lighter option like 3M wet or dry sandpaper and a leather backer. S35VN steel is hard and using a standard stone would be laborious. Additionally, a heavier stone is more weight to lug around when a diamond stone or sharpener is a fraction of the weight and yields quicker results. 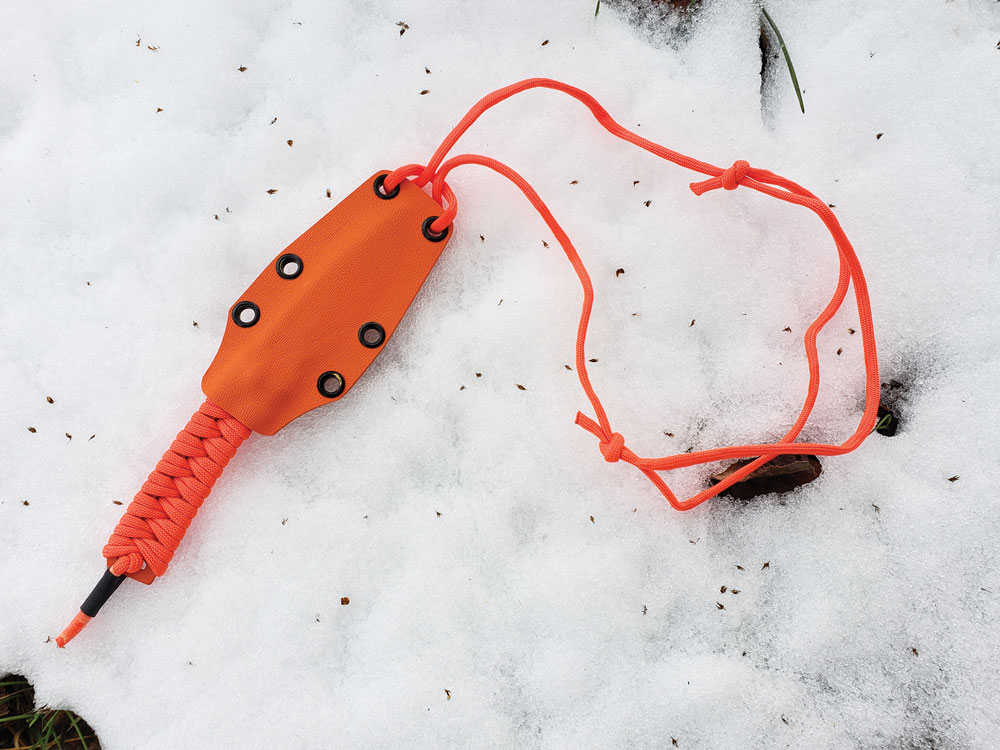 The blaze orange Kydex sheath and paracord option makes a dropped blade easy to find in the backcountry.

The Kifaru Helium 1 is more than enough knife for high-mountain game processing and camp use. It won’t replace a large belt knife or the knives you will leave at camp. However, worn around the neck, you’ll never be without it and it’s easily accessible regardless of what you wear or carry. We wore the Helium 1 long enough to forget we had it on. It’s a true neck knife capable of all the basic tasks a backpacker, long-distance hiker, or mountain trekking fisherman/hunter could call on it for. When your mission is covering great distances, this knife won’t anchor you down. KI

Started by Patrick Smith of Mountainsmith fame, Kifaru is a backcountry gear company offering options, since 1979, for those who travel into the mountains for hunting, fishing, and sporting purposes.

Kifaru is also a company with a sizeable and loyal military following. Over the years, the company has innovated lightweight tipi-style shelters with collapsible titanium stoves, modern winter pulks (sleds), and other notable game-changers in backpack technology.

Kifaru is a company that strives to push their end-users farther by offering the best equipment “bred in the backcountry.” The gear they produce is top-notch and meant for serious use.

Eric Bender, one of Kifaru’s top industrial designers explained to us the perfect collaboration between R&N Blades as maker and Kifaru as distributor.

“The Helium 1 falls into line with our philosophy that there is exactly what is needed to accomplish the goal without a whole lot extra. You don’t always need to have the heavier knife in your kit when a smaller one will accomplish the same task. This knife gives our customers a chance to carry less weight in, so they can carry more weight out.”

The business relationship between R&N Blades and Kifaru is one where both companies understand the importance of lightweight and durable gear. With the Helium 1 around your neck and Kifaru outfitting on your back, it’s easy to open up the backcountry.

Ready to get the latest information and videos on everything knife related sent directly to your inbox? Sign up here!