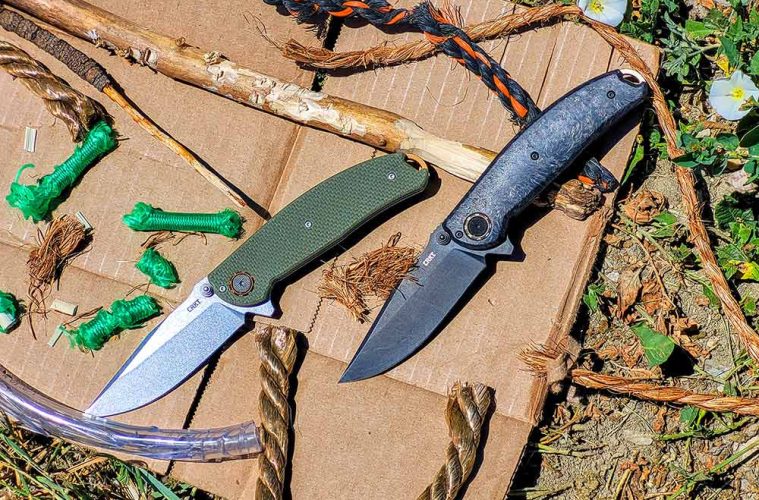 CRKT KNIFE COMPARISON: ONE WITH D2 AND G10, THE OTHER WITH S35VN AND CARBON FIBER

When it comes to choosing a new EDC knife, it often requires making tough decisions. Recently, I whittled my choices down to two new CRKT Butte models: one with D2 steel and G10 scales and the other with S35VN steel and carbon fiber scales. Which would be the better choice?

I’ve been in the market for a lightweight, everyday carry blade for quite a while. What makes the most sense to me for an everyday carry is something versatile enough to tackle any mundane task that arises, as well as something tailored to your particular lifestyle.

If you’re in the trades, your everyday carry needs are going to be different than a carpet-walking office guy’s. Or if you’re like me, you want your blade to be so light and comfortable that you forget you’re carrying it, only to be thrilled to find it in your pocket when it’s needed. 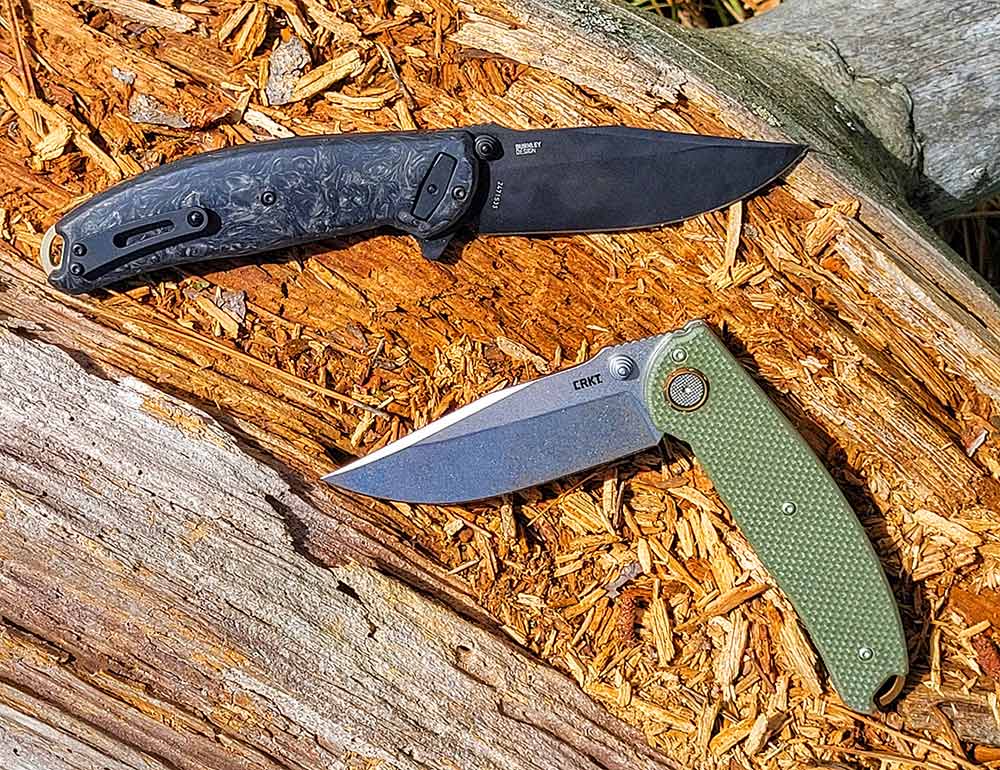 At first glance, the author was immediately drawn to the sleek look of the carbon fiber Butte (top), but after testing, the original Butte (bottom) stole her heart.

WHAT I WANT IN A BLADE

My lifestyle is not unlike most people’s; I do the same bland, indoor things as anyone else. But I do a lot of hiking and backcountry camping, and as an artist and builder, a fair amount of physical labor.

In my search for a new everyday carry, my main concern was its weight for long-distance hikes and whether it would fit in my girl pants (our pockets tend to be smaller than menfolk’s, if we’re lucky enough to have them at all). 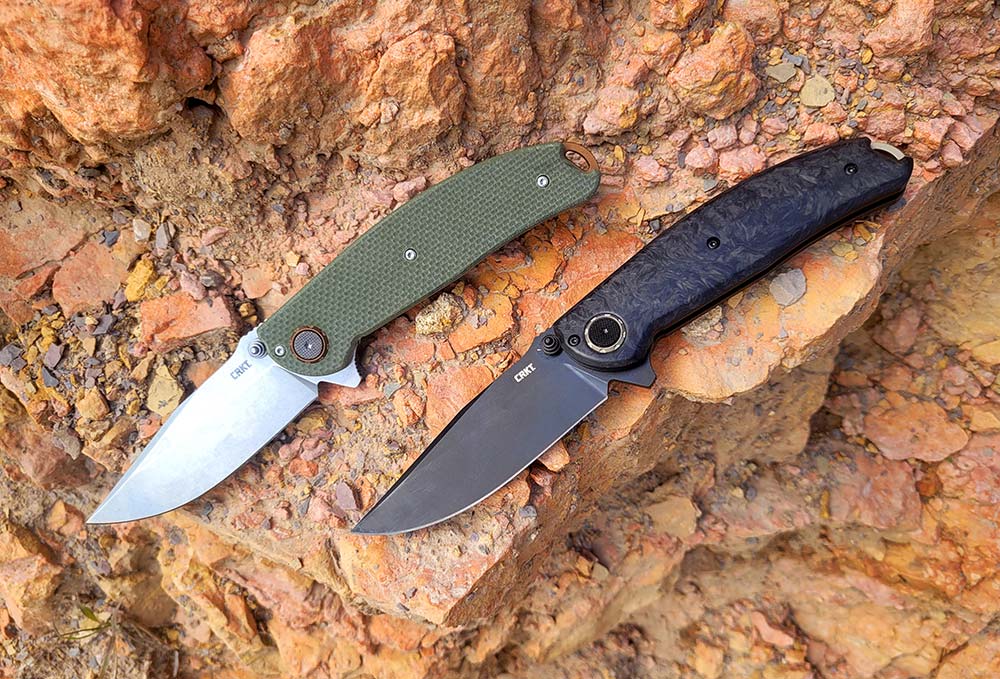 I was eager to try two new knives from Columbia River Knife & Tool’s 2023 catalog: two variations of the same drop-point folder, the Butte, designed by Lucas Burnley of Bend, Oregon. While each blade had different materials and strengths, both turned out to be solid contenders for my pocket.

I’ll admit that I’m a sucker for something pretty. That’s the first thing that drew me to the S35VN version of the Butte. Classy in all-black, it’s got a sleek drop-point shape with titanium nitride finish and smooth, marble-patterned carbon fiber scales.

Its original-design counterpart has a more classic, woodsy vibe, with textured, G10 scales in olive-drab green and a stonewashed blade finish. Both knives have a convex grind and dual thumb studs, a drawn swedge and jimping, a clip for deep-pocket carry, an open back, and a fairly large lanyard hole. 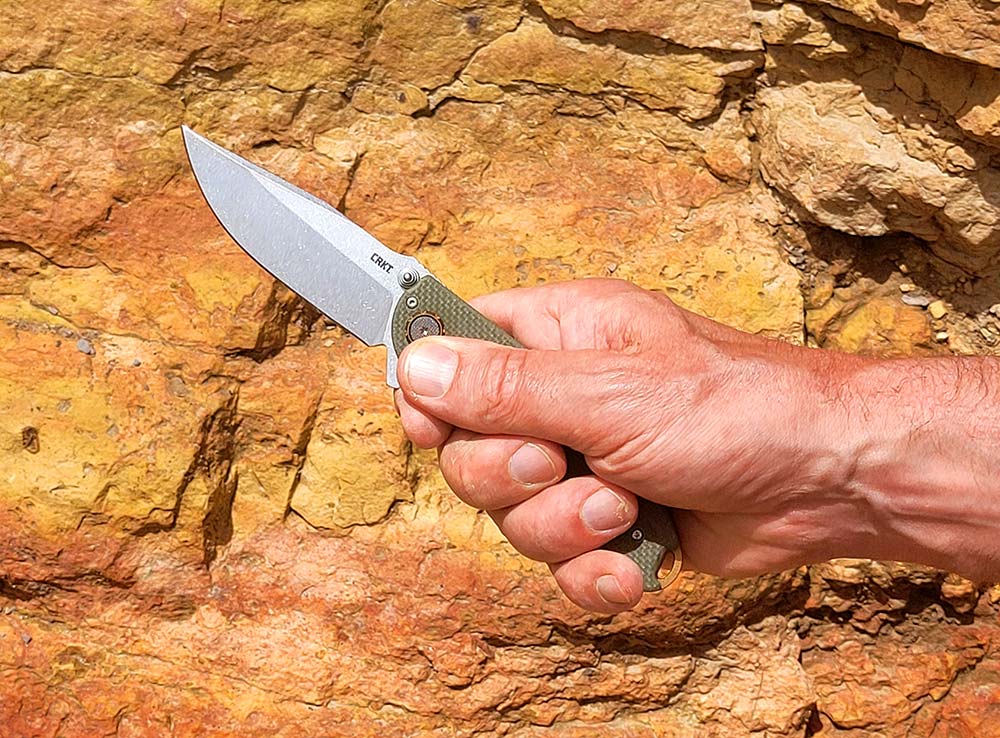 Both the author and her husband thought the Buttes were slightly big for an EDC, but not unreasonably so. 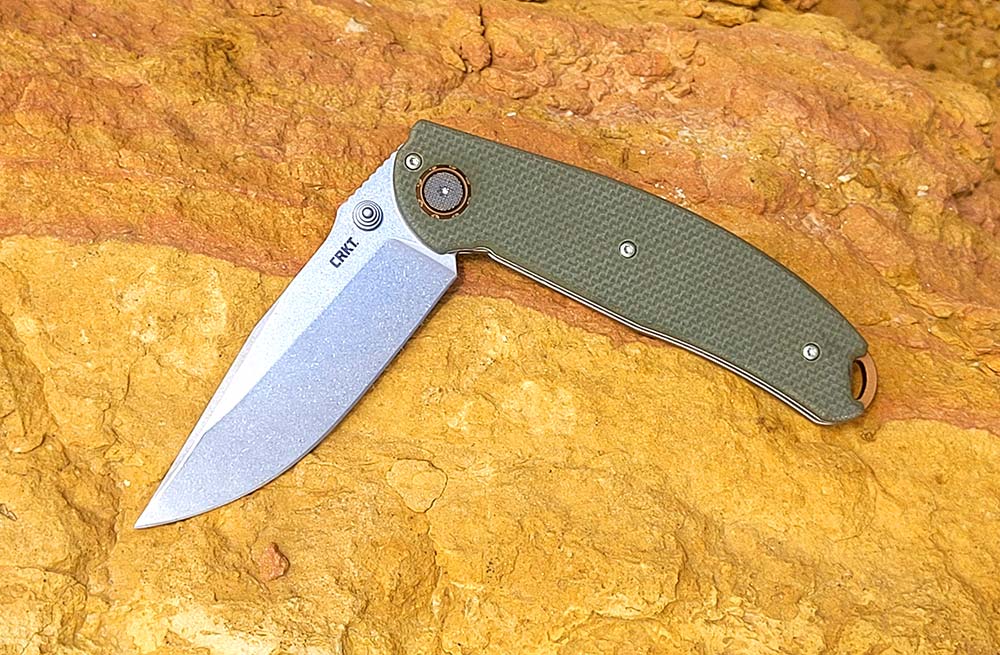 The original Butte measures 4.57 inches folded. The author loves the copper accents on the pivot and lanyard hole.

The S35VN has titanium liners as opposed to the original Butte’s steel, and its blade measures 0.01 inch longer than the other blade at 3.36 inches. Both blades are a moderate 0.12-inch thick.

Aside from their looks, the main differences in these knives are the steels and the handle materials. Obviously, the carbon model is lighter than the G10 (3.90 ounces versus 5.0), and that was the main draw for me.

Something that matters less to me but possibly more to a knife aficionado is the quality of the steel: S35VN versus D2. Both steels are high-end materials, but where D2 is considered a tool steel that is still susceptible to the elements, S35VN is considered a stainless steel, meaning it will be more resistant to corrosion and rust (possibly even 100% resistant).

If you take good care of your D2 blade, however, you shouldn’t find an issue with it. You may find that D2 is harder to sharpen than S35VN, though, and that in terms of edge retention and hardness, S35VN edges out D2 by a slight margin. The open backs of the Buttes make for easy cleaning, and the thickness of the blades is versatile enough for EDC. 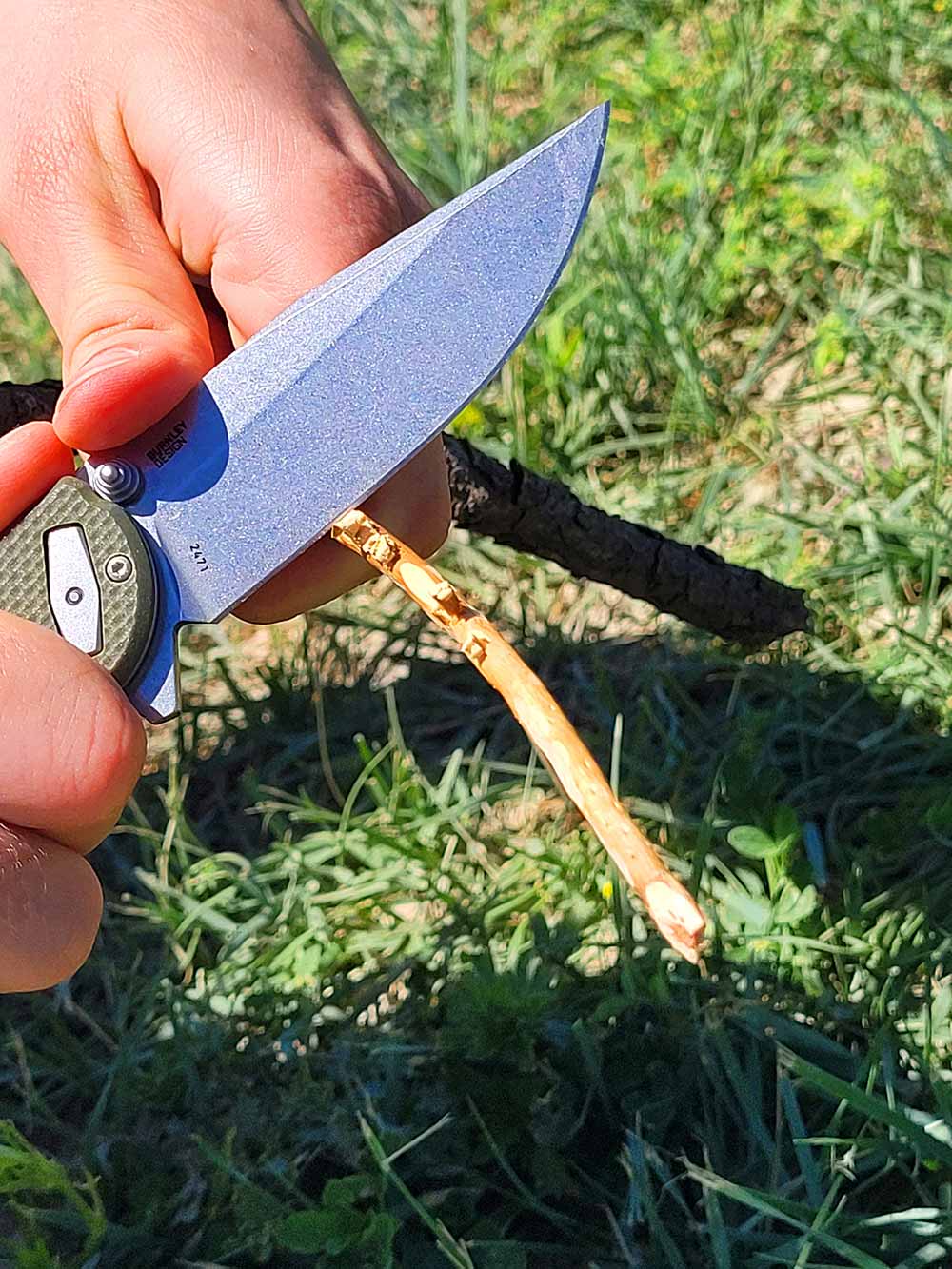 Where the author’s friend had a tricky time shaving wood with the S35VN Butte, the author shaved wood like it was butter with the original Butte, both on harder and softer wood.

The other comparison to consider with these two Buttes is the scale material: G10 versus carbon fiber. Both are top-of-the-line knife handle materials and each has a different set of traits, so it will largely come down to personal preference on which is better.

G10 is a tougher, heavier material that is slightly stronger and takes pressure better, but carbon is a little stiffer and less flammable. G10 will also fare better in wetter environments and has a lot more grip than carbon, so if you’re handling a blade in the rain, I’d bet on the G10 to perform better.

This is something I would consider because I will use this blade while camping, but the lightness of the carbon is still a trump card for me.

“I was actually quite shocked to discover that the $125 D2/original Butte cut better than the $300 S35VN blade.” 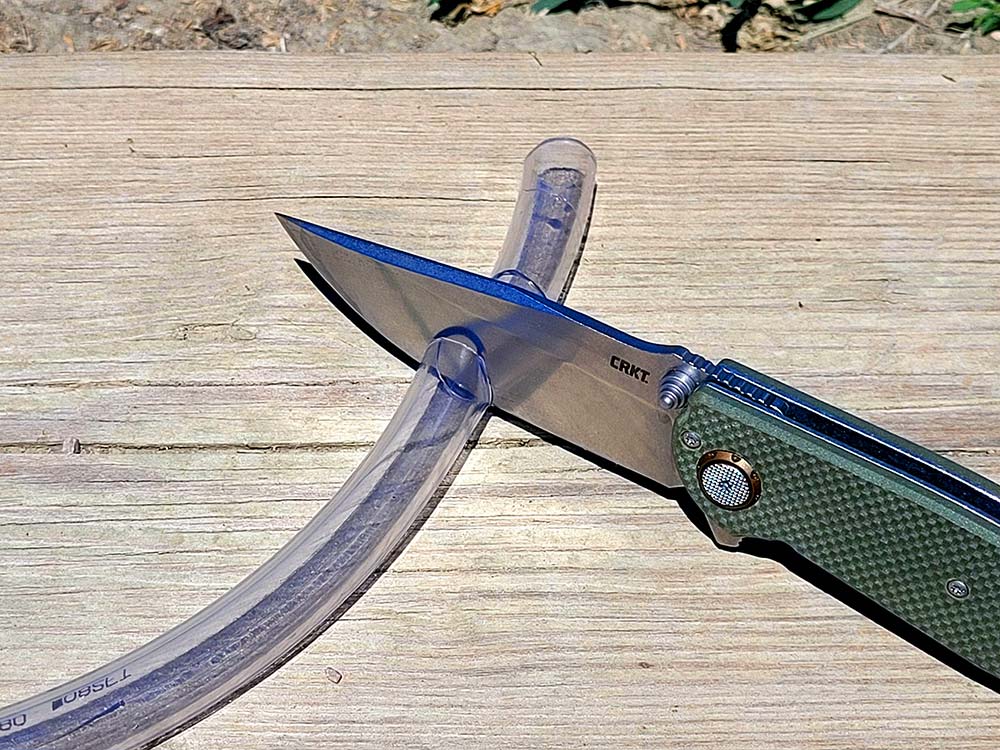 The author tried cutting plastic tubing with each knife, and the D2 once again outperformed the S35VN. With enough pressure, the D2 was able to slice the tubing, whereas the S35VN needed to first puncture the plastic with the tip before slicing became possible.

IN SEARCH OF THE BETTER BUTTE

I carried both of these knives—one in each pocket—for several weeks, getting a feel for them and testing their actions. The assisted opening on each was fast and smooth, and the flipper was the perfect size and shape. Right out of the box, the release of each knife felt a little sticky to me, and I had to apply a lot of thumb pressure on the pivot button of the Deadbolt lock to get each knife to close—even more so on the original Butte.

Maybe it’s just my hand, but I did not feel completely comfortable closing either knife with one hand; I had to hold down the release and fold the knife with my left hand to close it, though I suppose this might not be an issue for someone with a beefier hand.

A little more familiarity with each blade got me to the point of occasionally pulling off the one-handed closing, and after enough repetition, I did think the action of both blades became a little smoother. 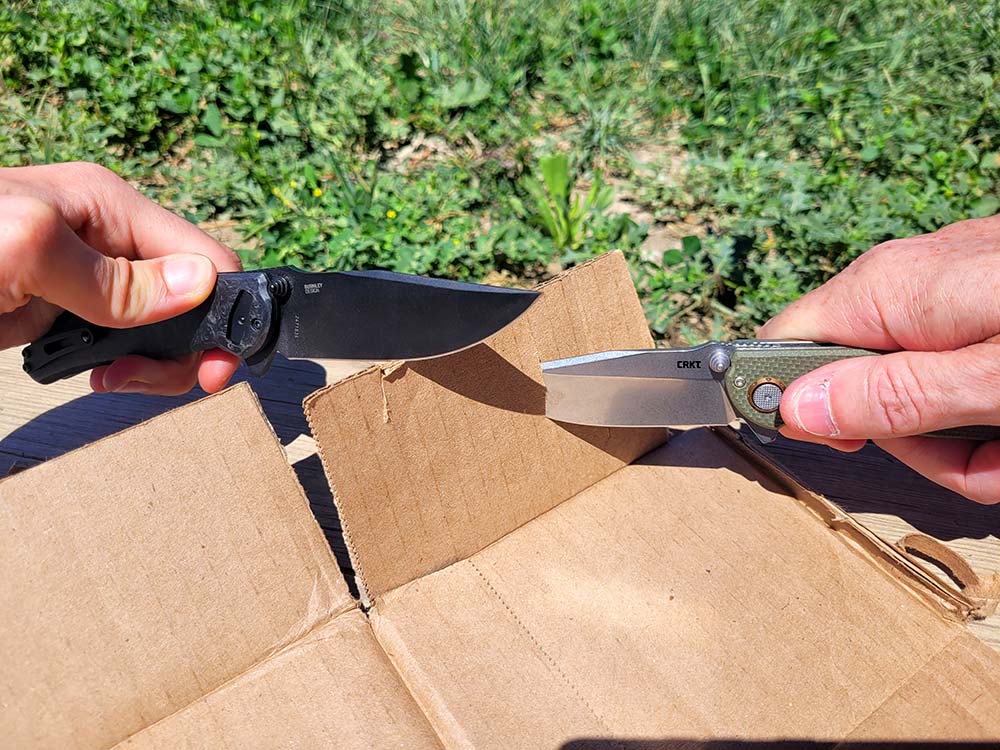 Shown here is the difference in each knife’s ability to cut cardboard. The D2/original Butte had no trouble slicing the cardboard, but the S35VN had difficulty initiating the cut. 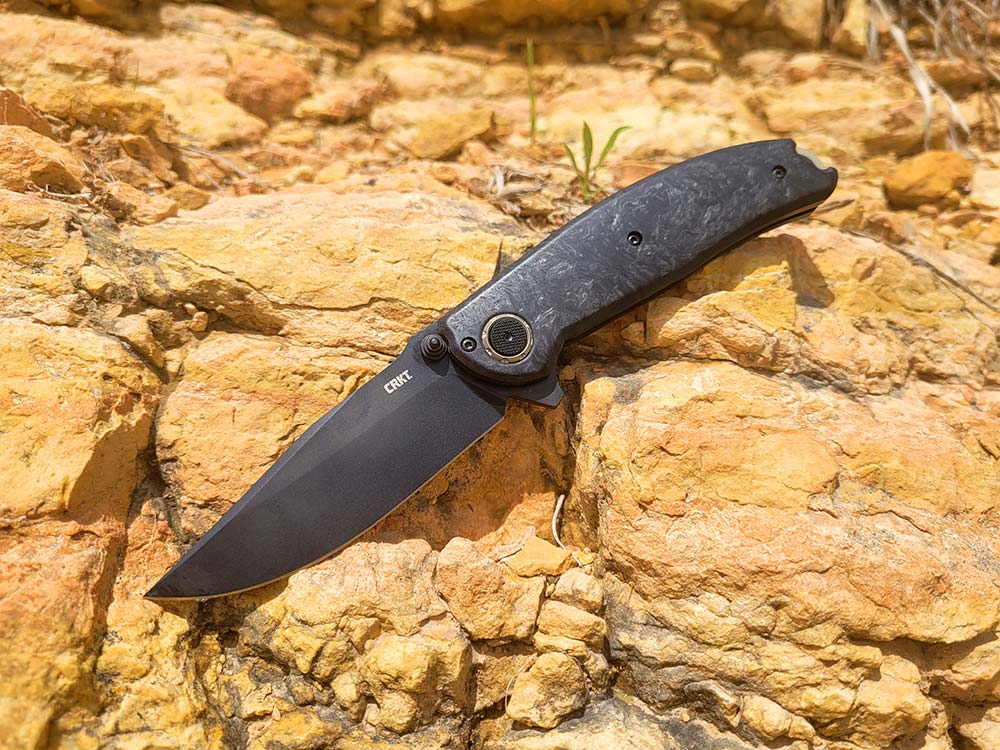 The marbled pattern of the carbon fiber scales lend the S35VN Butte a sophisticated air that the author would be proud to flaunt for EDC.

As you would expect, I cut up a bunch of stuff. I cut cardboard. I cut manila rope, and pesky nylon rope. I cut plastic tubing, wood, a bungee cord, and a towel. I was actually quite shocked to discover that the $125 D2/original Butte cut better than the $300 S35VN blade. And it wasn’t just one or two things it excelled at cutting; nearly every material yielded more easily to the D2.

The very first thing I tried was cardboard. The D2 sliced easily and rarely got stuck, while the S35VN had a difficult time even starting each cut. I don’t know if perhaps the S35VN just wasn’t sharpened enough coming from the factory and this is a one-off problem, or if this is a deeper issue. This is not to say the S35VN was dull or couldn’t perform; it simply was outmatched in my testing against the D2.

“I can’t easily dismiss the airy weight of the carbon fiber, though, or how comfortable it is in my pocket.” The author was more pleased with the look and feel of the S35VN Butte than with its performance, but that was partially due to the ability to compare each blade side-by-side. 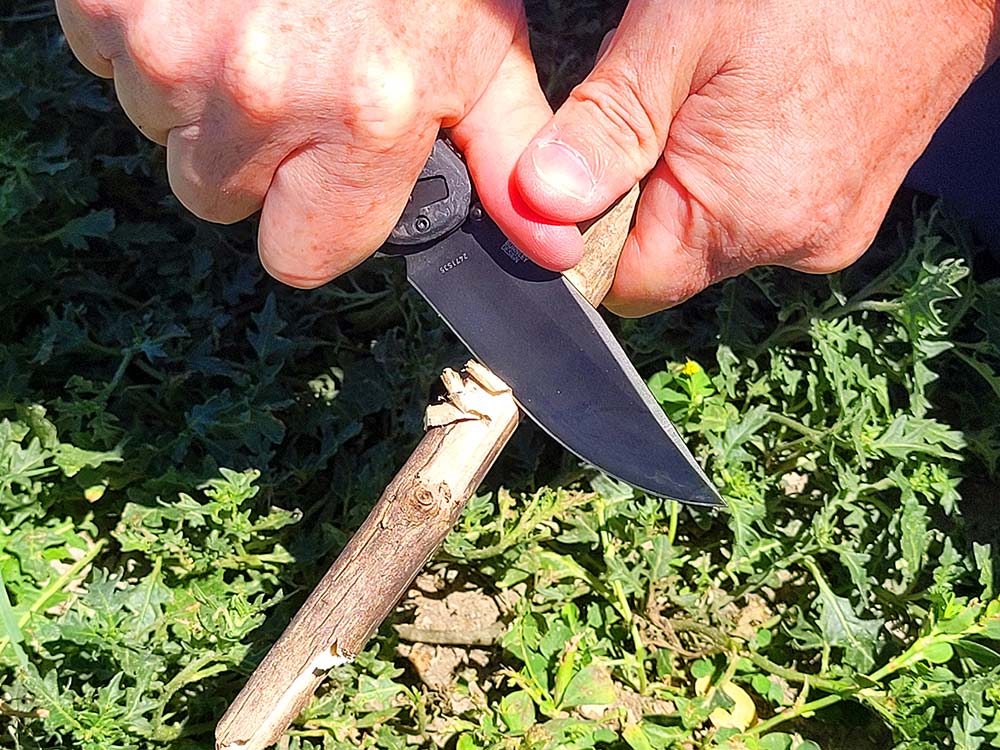 The author’s friend had a more difficult time than it ought to have been shaving wood with the S35VN blade. Push cuts did the trick, but not with ease.

Aside from the cutting performance, here are a few other things I noticed. First, I like the clip on the carbon fiber blade much better. It’s lighter and springier and is both secure and easy enough for me to pull from my pocket, whereas the G10 Butte clip is a little overkill for me.

It took much more effort freeing it than the carbon. I also didn’t even notice the carbon in my pocket; it sat comfortably through crouching, while the G10 was noticeable and didn’t conform to my positions as well.

I like the contours of the carbon fiber scales better, too. The scales are a little rounder than the G10’s, and the G10 has broader beveled edges, making it less ergonomic, in my opinion.

The carbon was also more comfortable in my hand. I was slightly concerned about how the carbon would fare in wetter conditions with that smooth handle, so I attempted cutting under running water. Surprisingly, there wasn’t much of a difference between the two knives, despite the significant disparity in texture.

THERE CAN BE ONLY ONE

OK, there doesn’t have to be only one. In fact, I really like both of these knives, and I would certainly employ them for different tasks. For the price, I thought the original D2 Butte outperformed its more expensive younger sibling. Although I personally like the S35VN’s looks and feel more, ultimately, a knife is meant to cut, and the D2 seemed to do that more readily than the flashier blade. 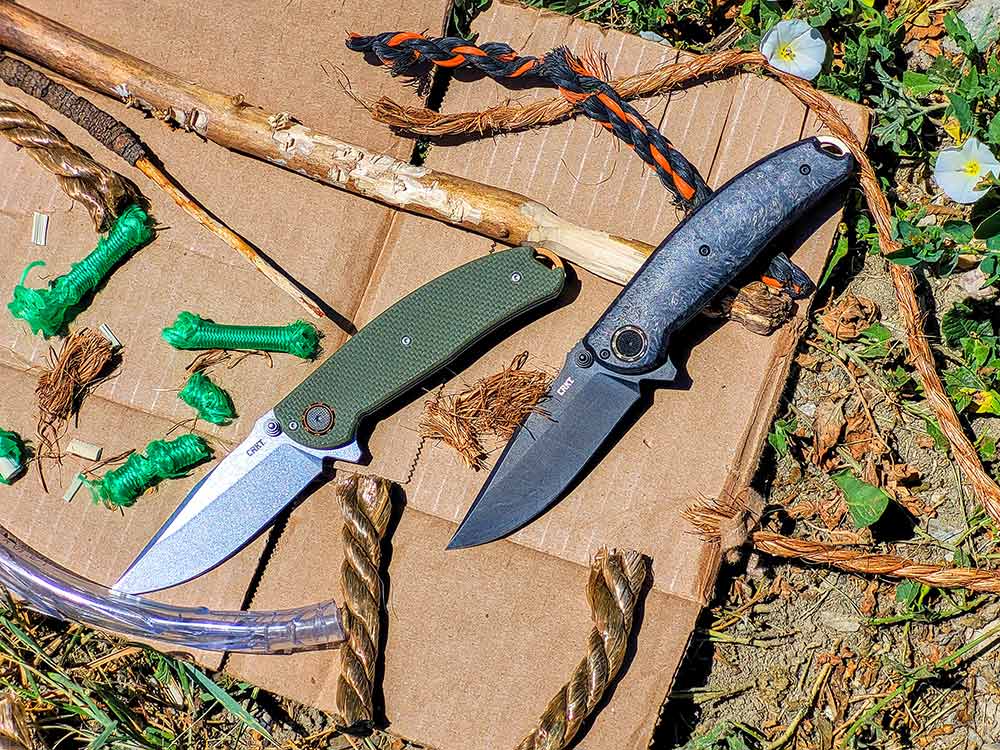 Shown here is an array of some of the things the author cut during testing: bungee cord, cardboard, wood, plastic tubing of varying sizes and nylon and manila rope. Other than the bungee cord, wood and T-shirt fabric, each material put up moderate resistance when cutting, though the main issue the author had was with the S35VN’s ability to easily slice cardboard (since that should be a task dominated by any EDC). Neither Butte ran into any resistance while piecing apart bungee cord, but that would have been a major red flag if either had.

I can’t easily dismiss the airy weight of the carbon fiber, though, or how comfortable it is in my pocket. For that reason, I think I’d carry the S35VN as my EDC and enlist the D2 as my hiking blade.

Even though I wanted a lighter blade for hiking, the D2 seems more reliable for the tougher use it might see out in the woods. For the $300 price tag of the S35VN, I’d probably have to compare it to other lightweight knives to see if it still deserved to be my everyday carry companion.

A version of this article first appeared in the November 2022 print issue of Knives Illustrated.