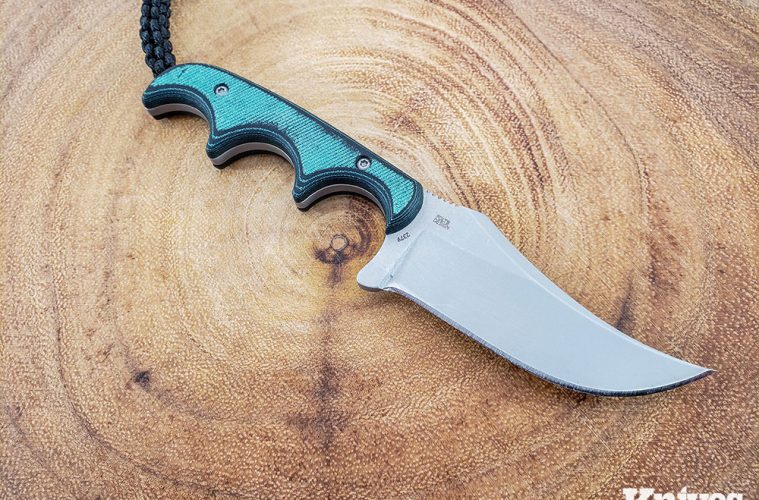 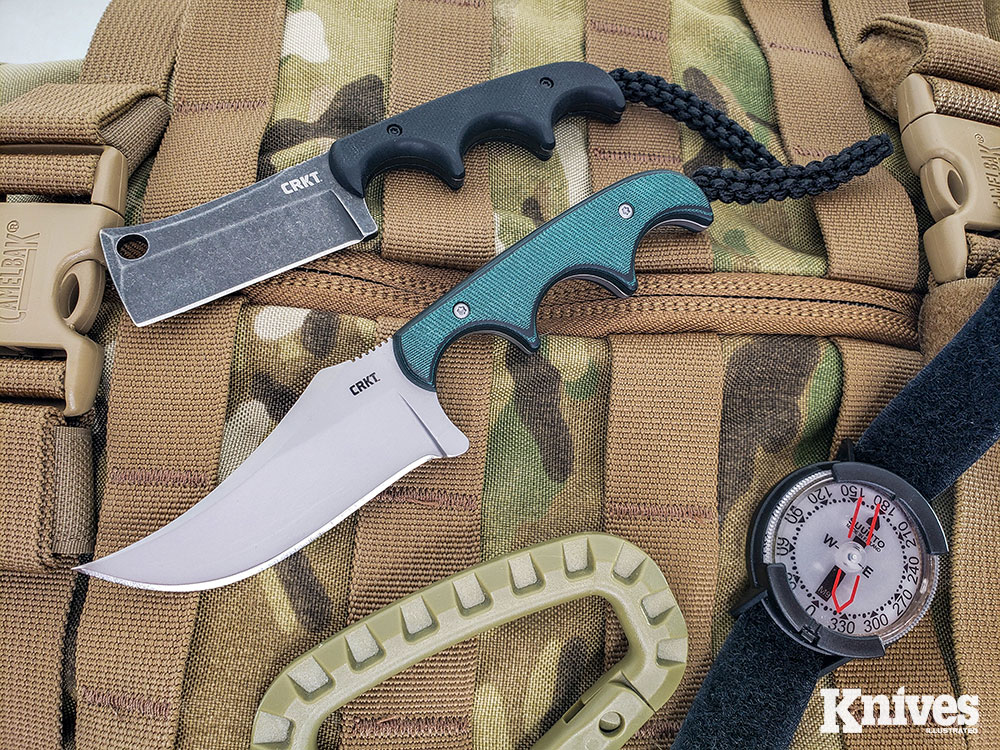 The two newest Minimalist designs from Alan Folts for CRKT are the Cleaver (top) and Persian (bottom). Each Minimalist serves its own niche with the different blade styles excelling in different areas. You just need to pick the one that’s right for you. Or grab a variety of them and pick what’s right for your tasks for the day.

Columbia River Knife and Tool (CRKT) began its relationship with Alan Folts 13 years ago, and it all started at a knife show with a friend of his in the industry taking one of his custom Minimalists over to show the folks at CRKT.

CRKT took a chance on the then relatively unknown part-time maker and did a limited run of the first Minimalists, which was a Wharncliffe design. That initial run sold out quickly and the path was laid to where we are today, 10 Minimalist designs later. The latest additions to that group are the Persian and the Cleaver.

I was surprised to learn that these latest designs are the result of user input in his Facebook group for Minimalist users, both custom and CRKT. Alan has always wanted customers involved in the design process, and the group gives him a chance to engage with enthusiasts of his designs on a regular basis.

“The Persian makes a great EDC knife and would be my choice for a hiking and backpacking knife.” 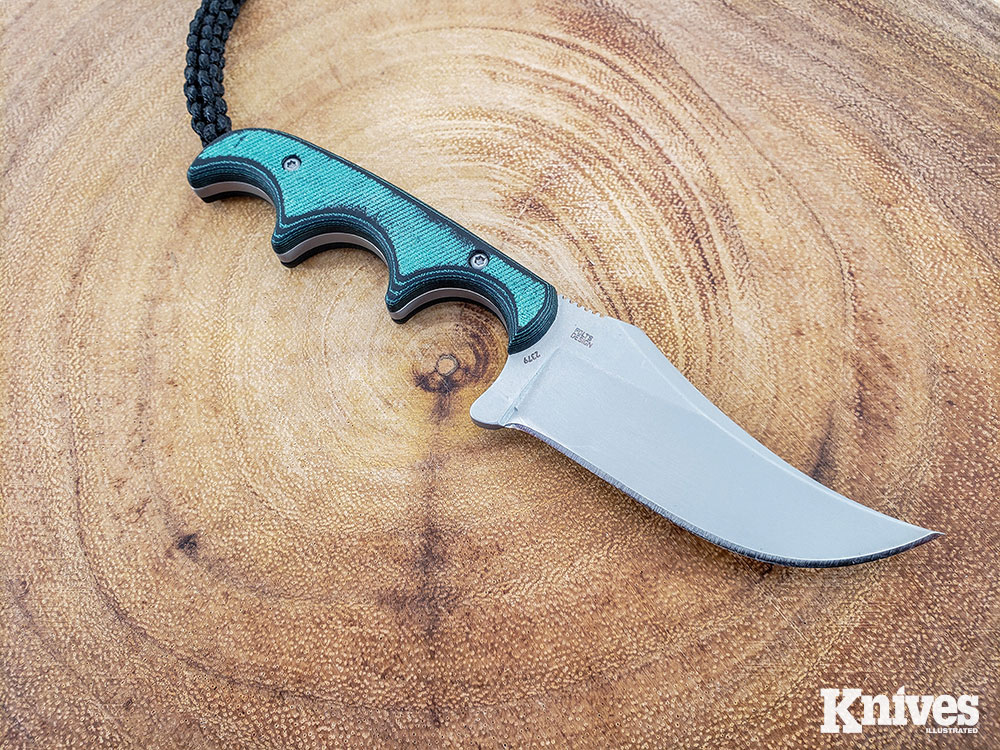 The Persian uses a 2.76-inch blade with a long sweeping edge reminiscent of the Arabian daggers that influenced it. Its fine, upswept tip and substantial belly would make it an excellent small game knife.

This was especially important over the past year with most shows shut down due to COVID-19. He couldn’t see people face to face, so the group provided a solid sounding board to keep things moving even with the rest of the world shut down. 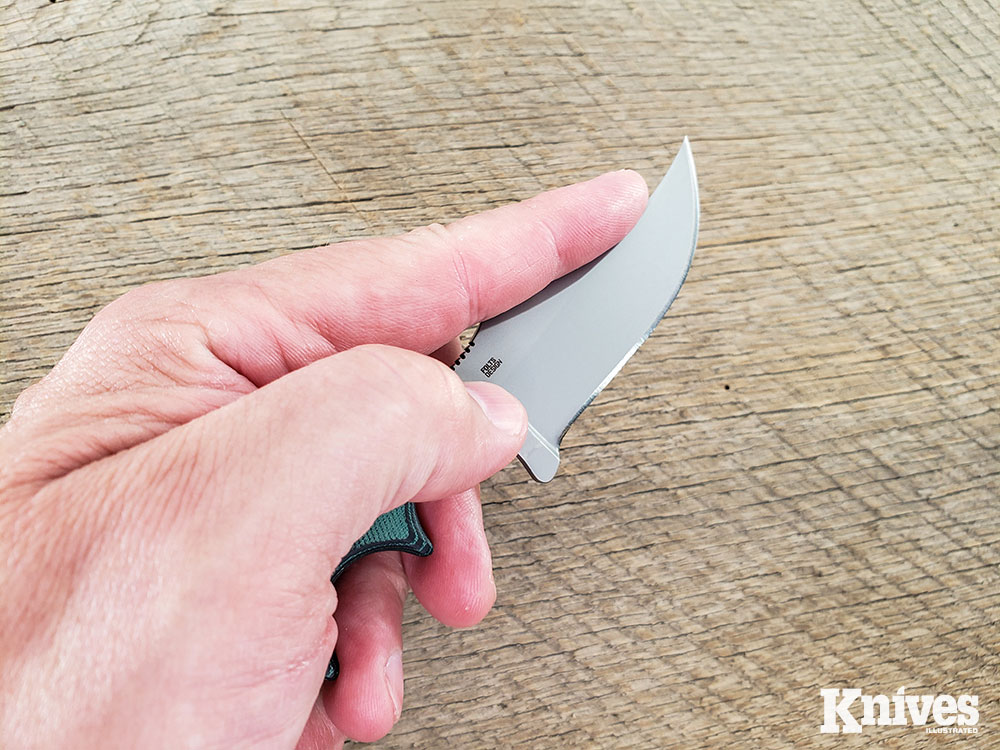 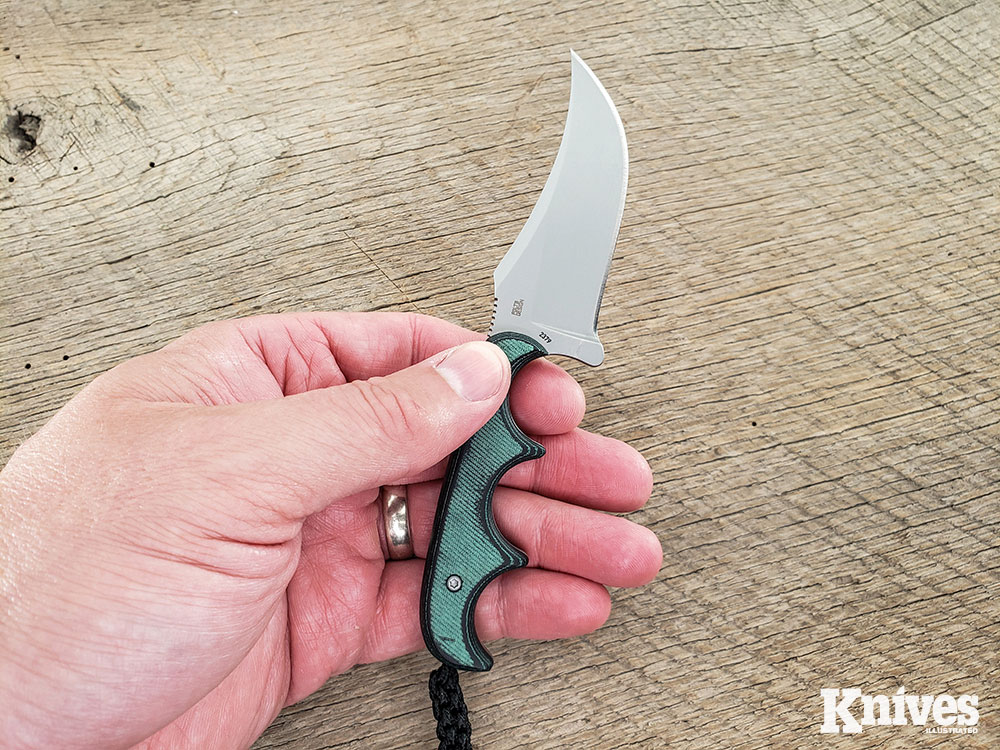 Alan had a poll on what design these folks wanted to see and the Persian and Cleaver came out on top. The Persian took the lead, but the Cleaver was so close that Alan decided to go with it as well. For folks in the group, Alan did a batch of custom Persians, only available to group members. 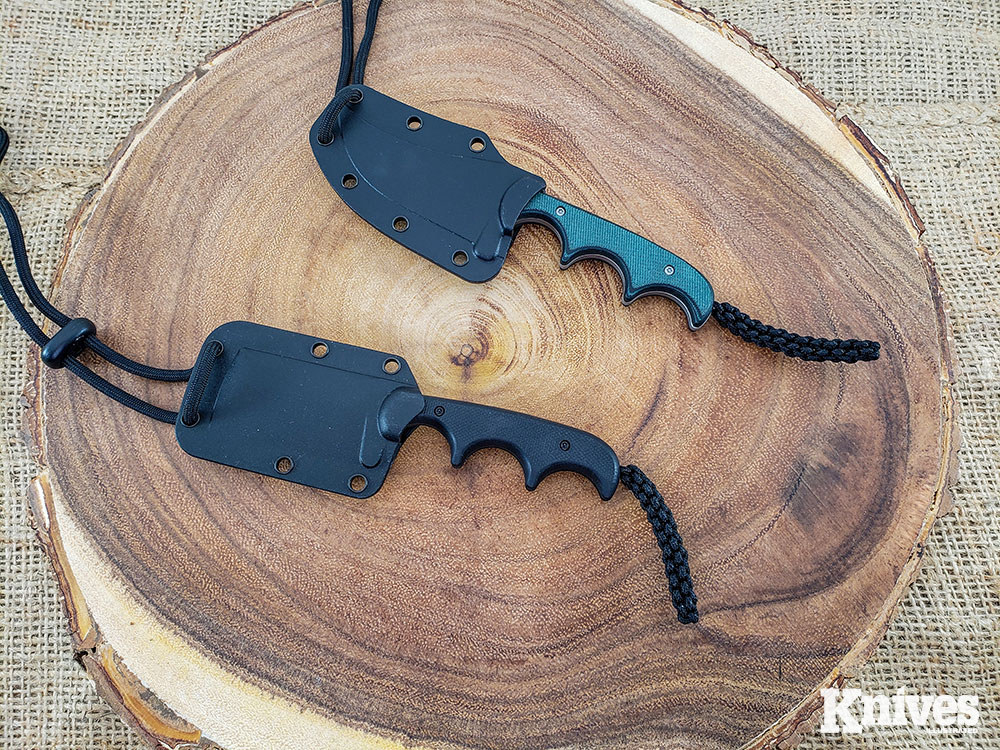 The CRKT Minimalists ship with a polypropylene neck-style sheath with paracord necklace. 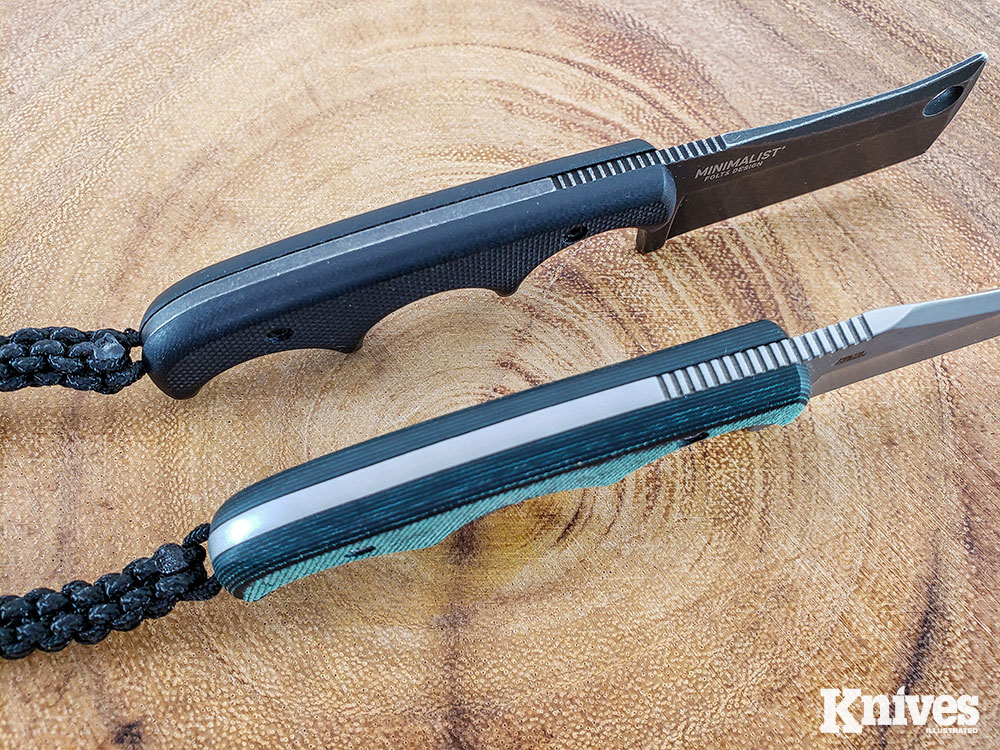 All Minimalists are full-tang designs, but here you can see that the Persian is slightly beefier than the Cleaver at 0.13 inch thick as opposed to 0.10 inch.

The CRKT Persian and Cleaver share many attributes with their other Minimalist kin. They all have the same ergonomic handle that’s the core of the design, and a braided nylon lanyard cord. The sheaths follow the standard Minimalist style with a polypropylene version equipped with a paracord lanyard for neck carry. Blades are hollow ground with a secondary bevel, and they come sharp enough to shave hair out of the box. 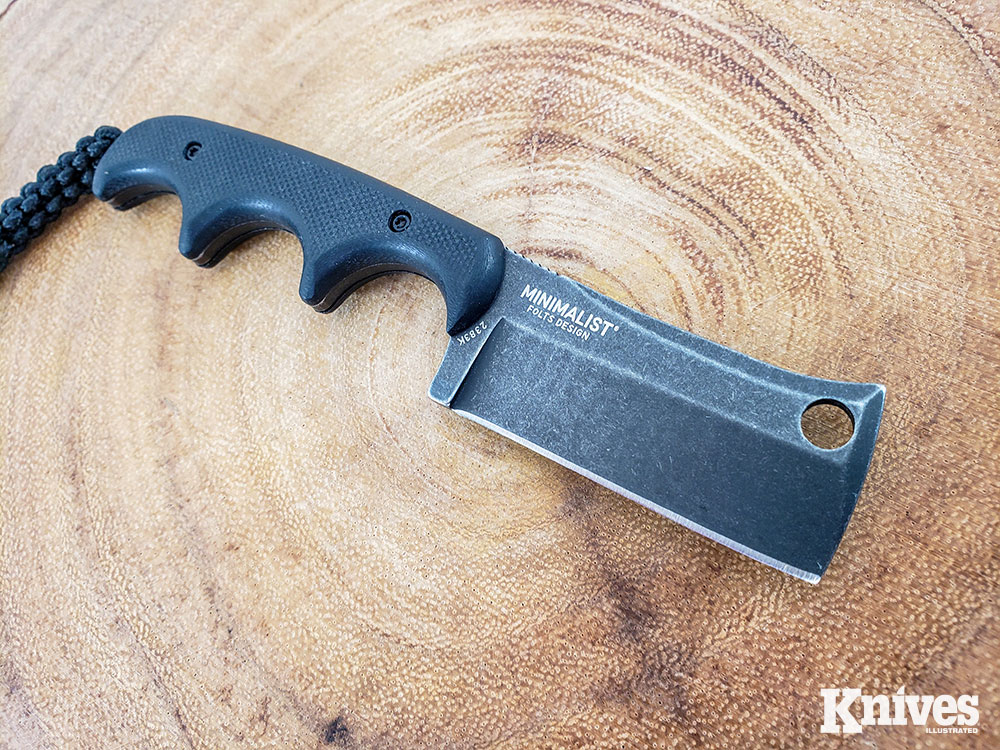 Although it has that kitchen cleaver styling, you won’t be doing a lot of chopping with the Minimalist. It does work great for small chores, though, and Alan Folts likens it to a Wharncliffe without the point, due to its straight edge.

The Cleaver comes in three models: the Blackout that I received for testing with a stonewashed finish and black G10 scales, and a green resin-handled model with a bead-blasted blade. The blade shape, as its name implies, is a squared off cleaver style. All have 2.13-inch blades of 5Cr13MoV stainless steel, which is similar to 420HC or AUS6. A version with an orange G10 handle is also available with a stonewashed D2 tool steel blade. 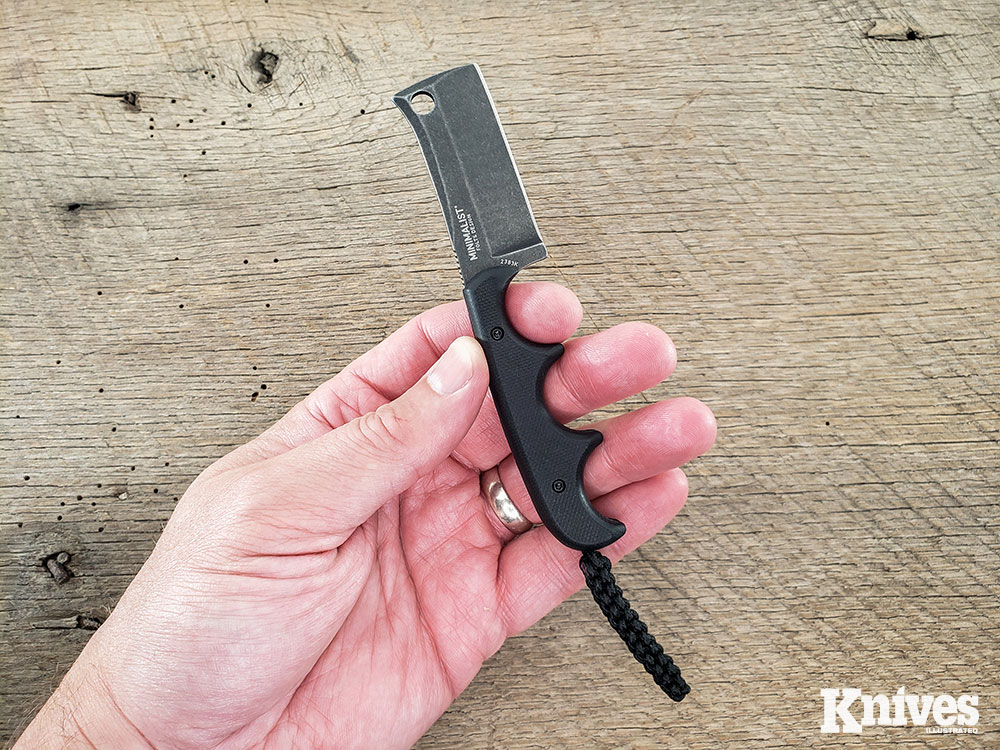 The distinctive deep finger grooves on the Minimalist make for a solid three-finger grip.

The Persian has an 8Cr13MoV stainless steel blade, which is similar to AUS8. The Persian is one of the biggest Minimalists so far with a whopping 2.76-inch blade with a long sweeping curve reminiscent of an Arab Jambiya or Khanjar dagger. It has a green Micarta handle and a bead-blasted blade.

The Minimalists lend themselves well to everyday carry with their compact size and light weight: 2 ounces for the Persian and 1.7 ounces for the Cleaver. They come set up for neck carry, tip-up in their polypropylene sheaths, and the retention is a nice balance between securely holding the knife while still making it easy to draw.

The riveted holes in the sheath allow other mounting options as well such as lashing or zip-tying it to a pack, bag, fishing vest, or other piece of gear. You could also just drop it in your jacket or pants pocket.

If we’re honest with ourselves, most daily knife chores don’t really require a lot of blade, just a good sharp edge, and sometimes a point. Cutting boxes open, opening plastic packaging, cutting cordage, tape, or packing straps all can easily be done with blades the size of the Minimalists.

The Cleaver makes a darn good box cutter, and its blunt, squared off tip can be handy for a knife that you may leave out on a workbench or in your work area in easy reach. You’re not going to inadvertently poke yourself or anyone else with it. Alan likens it to a blunt Wharncliffe for folks who like the functionality of a straight edge, but who don’t want or need a point.

The Persian has a little more universal usage and I spent most of my time with it. I’ll be honest and say that the styling had a lot to do with that initially. It’s a good-looking blade with clean lines, and I’ve always liked the sweeping curved edge of Arabian knives. 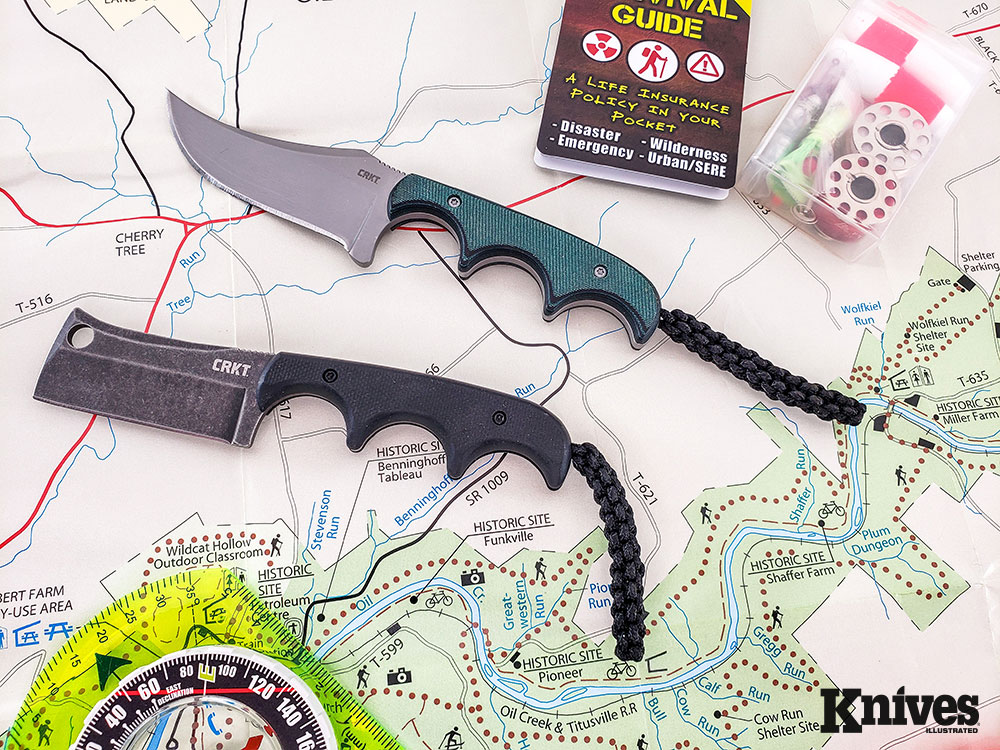 The Minimalist has always been a great outdoors knife, especially for backpacking or camping. Of the two, the author gives the nod to the Persian as the perfect knife in this role.

With its blade configuration, it could easily be used as a skinning or gutting knife. The handle shape lends itself well to a pinch grip between your thumb and forefinger and it gives you scalpel like control, which is just what Alan intended when he designed the handle.

The factory edge on my Persian was excellent. I mentioned that these come shaving sharp out of the box and I wasn’t kidding. I’m used to having to apply some pressure to get a new knife to shave, but I had a patch of hair cleanly shaved off my arm before I even realized it with the Persian. Whoops. It worked well for detailed carving as well, which was greatly aided by the handle design. It would be a good choice for making trap components or other small camp gadgets, such as pot hangers and the like.

While a lot of cutting chores don’t need a precise point, there are some that do. I used the Persian to remove a splinter and as a seam ripper to remove some patches from an old uniform. It’s a very fine point that easily slipped between stitches on the patches and around the splinter in my hand. I also managed to poke myself with it, and it was one of those wounds that was so clean that I wasn’t even sure it had cut me at first until a bit of blood started seeping out.

The Persian and the Cleaver are great additions to an already excellent lineup of Alan Folts’ designs from Columbia River Knife and Tool. I can see the Cleaver being a great choice for someone who works in a warehouse or a grocery store, who opens boxes and packages all day long, or just for folks who are fans of the style and appreciate the strength of the build.

“I can see the Cleaver being a great choice for someone who works in a warehouse or a grocery store, who opens boxes and packages all day long…”

The Persian makes a great EDC knife and would be my choice for a hiking and backpacking knife. Its size and weight belie its capabilities. You aren’t going to chop or process firewood with it, but it’ll do just about anything else you’d need it to do. The Cleaver makes an excellent box cutter and would be a great knife for warehouse or store workers.

With an MSRP of only $39.99 for these new models (with the exception of the D2 Cleaver) the Minimalists represent an outstanding value for the consumer, especially when you consider that the street price tends to sit a good bit lower than that.

A TALK WITH ALAN FOLTS

Like many knifemakers, Alan Folts is frugal with his material and was looking at ways to use leftover scrap steel from other projects. The first two Minimalists he started as a test of a new annular cutter that he had in his shop. He used it to bore three holes in his piece of scrap steel, and then cut that piece in half directly through the holes. This gave him two halves, each with the start of the three-finger groove handle design that we know so well today.

His first blade shape was a Wharncliffe that he intended on using as a canoe knife that he could attach to his personal flotation device. Alan carried those prototypes and used them for two years, learning from the design and refining it. He was focused on how the knife feels and indexes in the hand and wanted to give it scalpel like control using your fingers, not the palm of your hand as you would on a bigger blade.

Alan enlisted the aid of many others in the design process as he would hand the knife off to people at knife shows and other places to get their feedback. He honed the design from that input and his own experiences and started making custom versions for sale in his capacity as a parttime knifemaker. 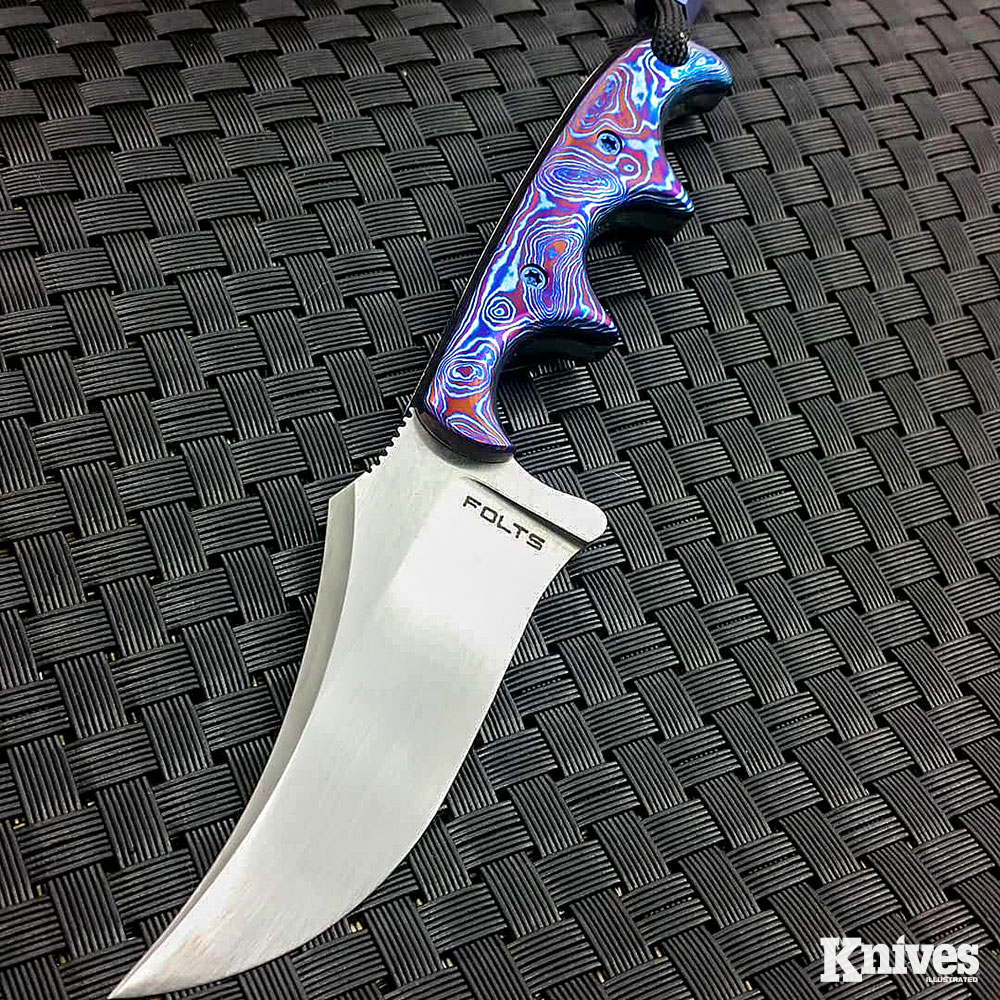 He said that CRKT has been great to work with over the years and that the people have become like family. Unlike a lot of companies, CRKT sources all its designs from knifemakers in a relationship that’s mutually beneficial. It gives them a broad and diverse line with a variety of styles and perspectives provided by each maker.

For folks who want a Folts design but maybe can’t afford one quite yet, the CRKT production models give them great, affordable options to purchase and use his knives.

While CRKT has a lot of variations of the Minimalist, Alan has some versions that he only does in his custom line. If you want one, or one of the other models of Minimalist that he makes, you need to act fast. He said that when he posts knives for sale on his website, they typically sell out in two or three minutes, and his dealers sell out right away as well.

Alan is big on having a personal connection to his customers, and sometimes that relationship starts with you walking up to a maker at their table at a show, or into their shop, introducing yourself, and learning about what they do firsthand.