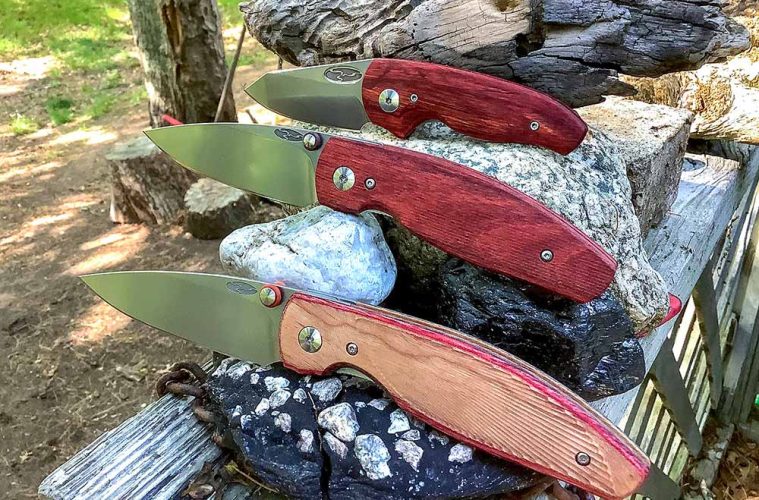 OUTFIT YOUR FAVORITE KNIFE WITH A HANDLE UPGRADE

Have you ever been shopping for a car (back in the days when cars were affordable) and you find the exact car that you want, but in the wrong color?  In that scenario you have two choices: take it or leave it. You’re not likely to change the color of a brand new car, although you can occasionally wait for your color of choice to come into the dealership. 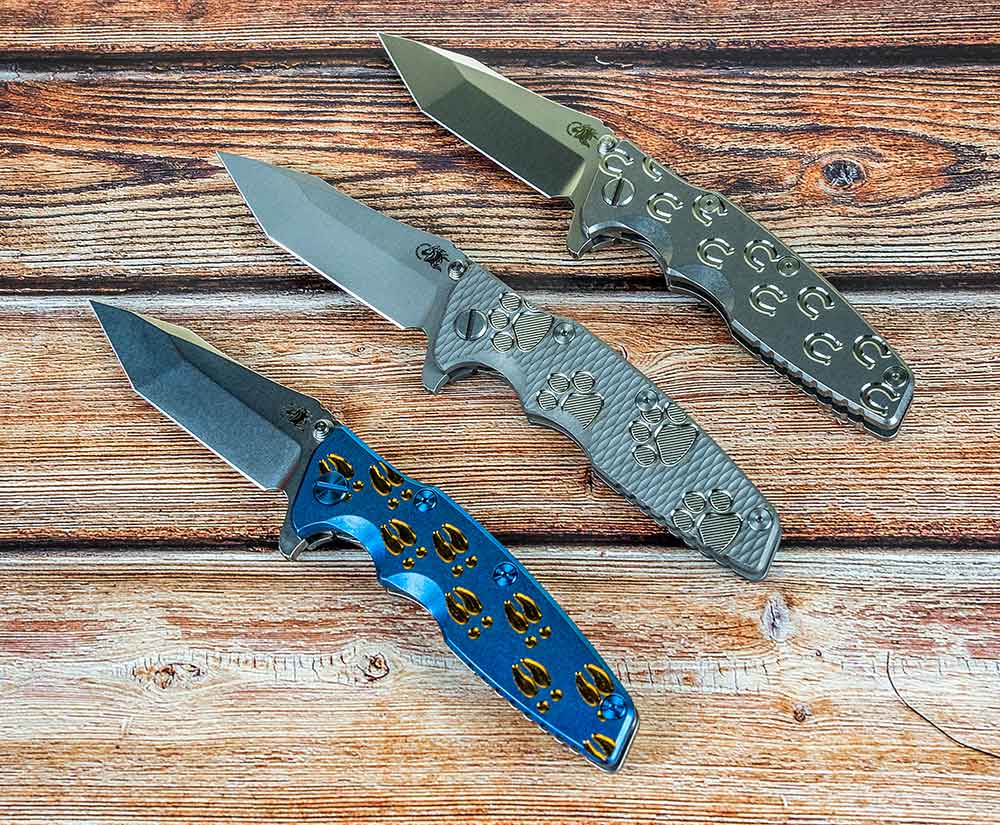 Those of us who like knives don’t have to live with “take it or leave it” when it comes to handle material, thanks to a unique group of crafters and manufacturers who specialize in knife handle replacement. 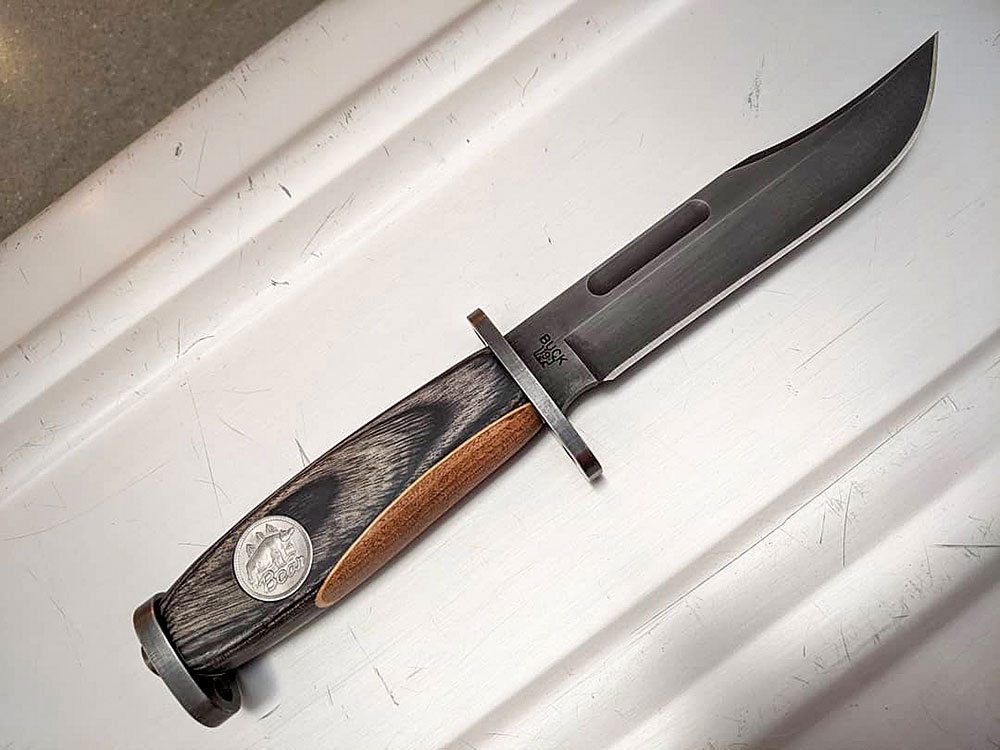 Currently available themes include various footprints—turkey, deer, and dog—machined in titanium and selectively anodized. Additionally, multiple dealers carry Hinderer scales in a plethora of colors and materials. Whether you want bright G10 or fancy polished titanium, you can get it to fit your Hinderer knife.

For even the most dedicated collectors, swapping parts and adding custom scales is part of the fun. Roland Ruehl has a nice collection of Hinderers. He’s been a part of the community so long that he even got his dog’s name put on a set of scales.

“On almost all my XM series Hinderers, I swap the original scale and clip screws with Torx screws from TiConnector,” he said.

In 1997, Halpert Titanium began making various knife parts for individual craftsmen and later for the industry as an OEM manufacturer. After years of doing production work as the OEM for other brands, Halpert made the business decision to stop manufacturing other people’s knives and focus on its own designs. The company created its own subsidiary knife company, Three Rivers Knives. Three Rivers has several popular models, most notably the Atom and the Neutron 2. 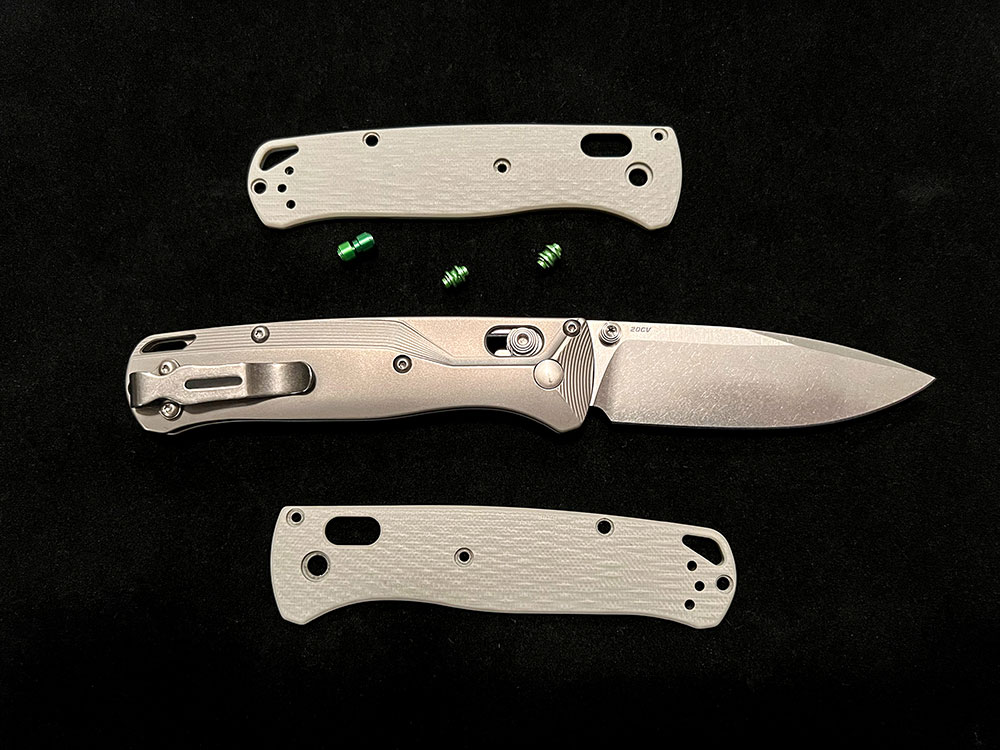 Because it began first as a knife parts manufacturer, it’s no surprise that Three Rivers designed its production knives to have interchangeable parts. Unique to the company is an innovative handle design that allows the handles to be changed with just two screws. The scales fit around the pivot, so that you don’t have to take the knife all the way apart to swap the handles.

Three Rivers is an experienced manufacturer of parts, and thus has the flexibility to innovate. If the designers want to do something in a new material, it’s nearly as simple as going to the other side of the building and getting it done. Take the Atom, for example. It was originally designed to utilize 0.140-inch-thick material, as there were limitations on thicknesses available to fit the original Neutron that required 0.063-inch thickness.

“Some knives are so popular and widespread that it’s profitable for third-party makers to offer handle scales.” 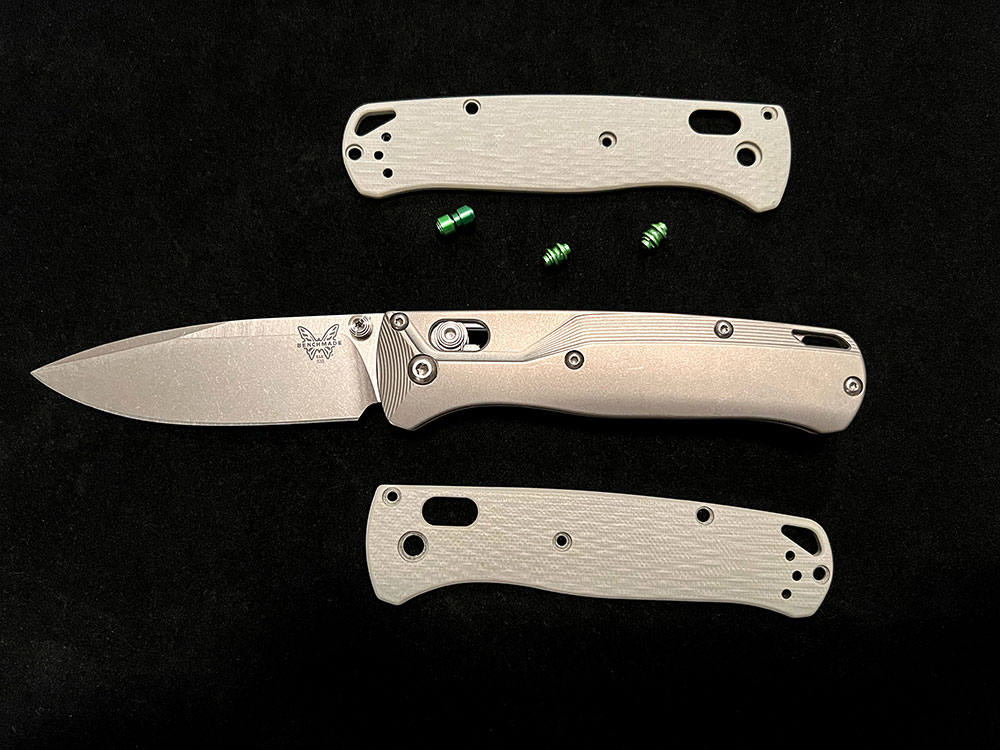 By designing for variety, Three Rivers is able to offer flat scales in G10, Micarta, and carbon fiber. The company also offers 3D milled and contoured synthetics, and at the top of the line it has 3D-milled titanium scales. It sells knives and scales separately and is one of the few places you can buy a knife “naked” without scales.

Three Rivers has a dedicated group of fans, including one customer who owns 16 of the Atom knives, all with different handle materials. No other company builds its knives with intentional modification in mind. It wants you to swap your knife parts around, in contrast to some companies for whom modification voids the warranty.

Some knives are so popular and widespread that it’s profitable for third-party makers to offer handle scales. One such third-party company is Flytanium.  It makes scales for more than half a dozen designs each from Benchmade and Spyderco, as well as a less extensive catalog for Kershaw, Gerber, Civivi, Ontario, Victorinox, and CRKT.

For the popular Benchmade Bugout, for example, it offers more than 50 different replacement parts, including various colors of thumb studs, back spacers, and handle scales. If you love your Bugout but want snazzy purple, you can get it. Flytanium scales are available at Blade HQ, Knives Plus, and Knifeworks. 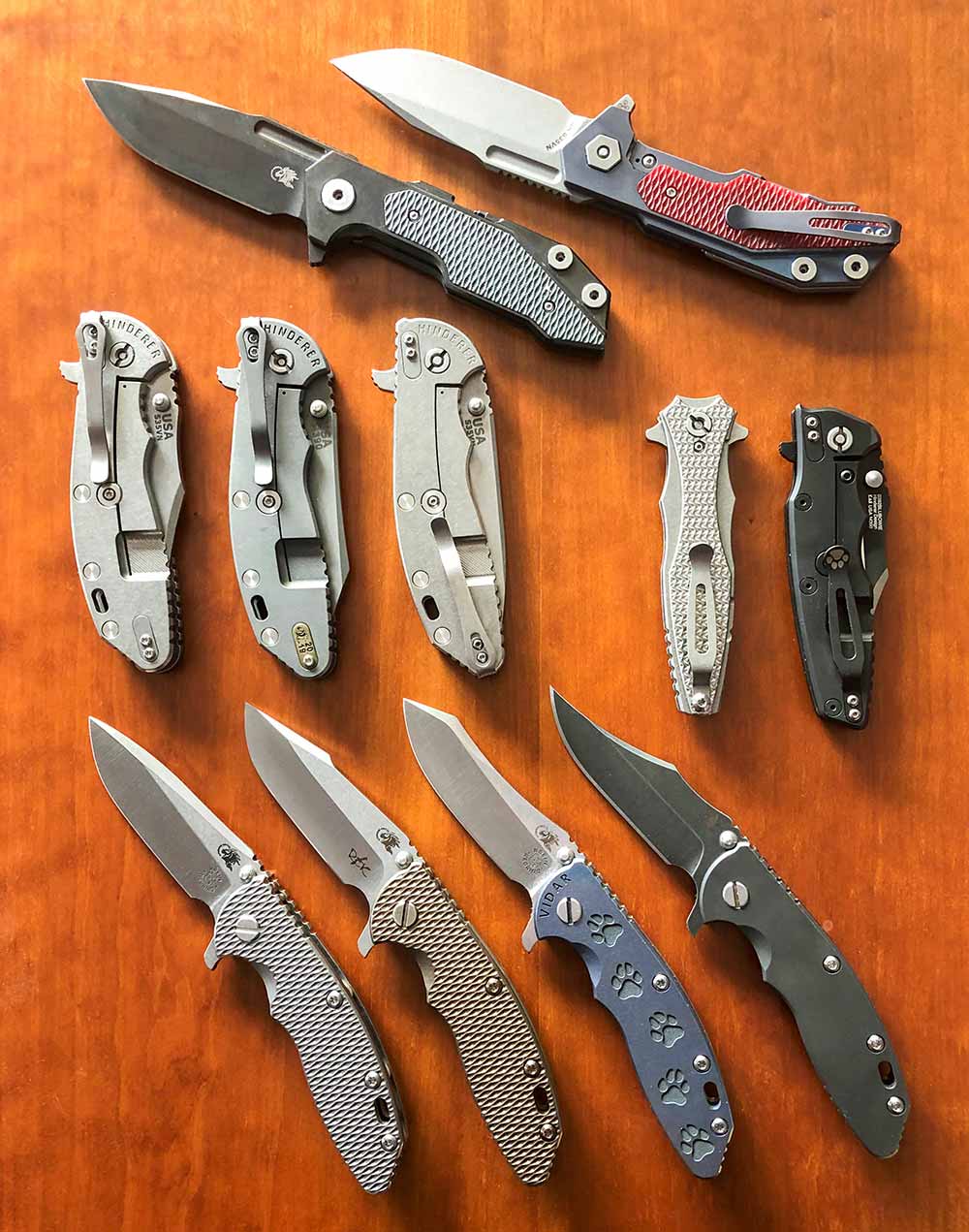 Another company that specializes in third-party CNC titanium knife handles is Rockscale. Based in California, it offers titanium options for five Benchmade and four Spyderco models. Although they’re a little pricier, they are 100% made in the USA. It’s a smaller operation, but company’s quality is top notch.

A third option in this same category is Australia’s xxxAdrenalinxxx Custom Designs. Beginning in 2012, it specializes in custom-designed, anodized titanium parts to fit knives from ZT Zero Tolerance, Spyderco, Benchmade, Kershaw, Emerson, and Hinderer. The company frequently sells on eBay and ships to the USA.

Certain craftsmen’s and women’s primary art is handle customization. These are not the ones who will unscrew a set of handle covers and put new ones on. These are the folks who will take a handle off a production knife and go in an entirely different direction than the original.

One such niche artist is Jeff Nowak of Michigan. Jeff runs an online archery shop that specializes in Fred Bear brand archery equipment. He’s a Bear bow collector as well and knows most of what there is to know about Fred Bear and his legacy. Jeff specializes in re-handling Buck brand knives with materials from Bear bows. Bear risers often have a distinctive stripe, and Jeff takes care to incorporate the stripe into his work in creative ways. 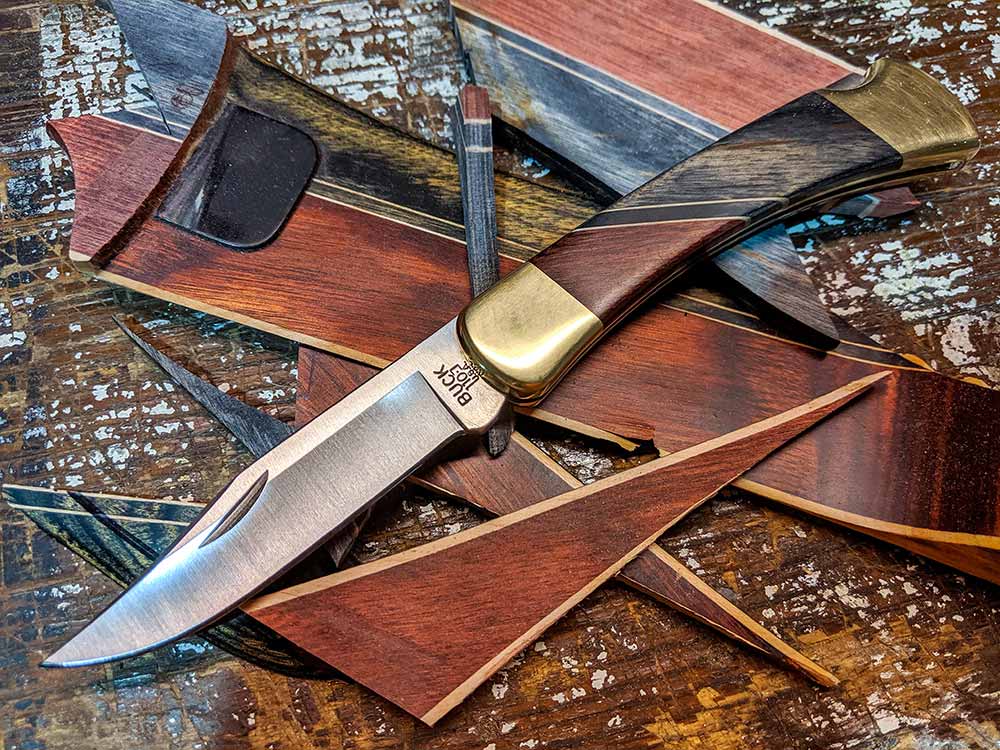 For a typical Buck fixed blade with a pommel, such as the model 119, replacing the handle is difficult and complex. The pommel is pinned, not threaded, and it’s a challenge to remove. Once the pommel is off, the handle must be boiled to heat the glue enough to remove the black phenolic handle. Jeff also re-handles the classic Buck 110 Folding Hunter.

On the more commercial end are the craftsmen and women at Santa Fe Stoneworks. Out in the dry country of New Mexico, they specialize in Southwestern style art handles. They’ve partnered with Spyderco and Kershaw on customized handle runs. They also do one-off work and produce their own line of knife designs as well.

In the same genre you’ll find David Yellowhorse. A qualified Navajo silversmith in his own right, he turned his attention to applying his distinctive style to knife handles. Yellowhorse modifies a variety of brands and styles but is most well known for his work with Case knives and the Buck 110. Those handles became notable enough that Case picked them up for licensing.

Now, in addition to the company’s one-off custom work and standard modifications, you can get a genuine Case knife from the factory in the Yellowhorse style.

MAKE IT YOUR OWN

Many people are satisfied with the knives they buy. On the other hand, many of us are never satisfied and want to tinker. For those of us who like to continually mess with things and can’t leave “good enough” alone, the world of replaceable scales is wide open territory.

But what if you’re not into complexity, or don’t know how to take your new knife apart? Thankfully there are plenty of resources to help.

Flytanium has an active social media presence, and its enthusiasts are always ready to answer questions. YouTube is also full of how-to videos for scale replacement on a huge variety of production knives. For example, “Benchmade Bugout scale swap” yields a dozen or more videos that can walk you through the process. 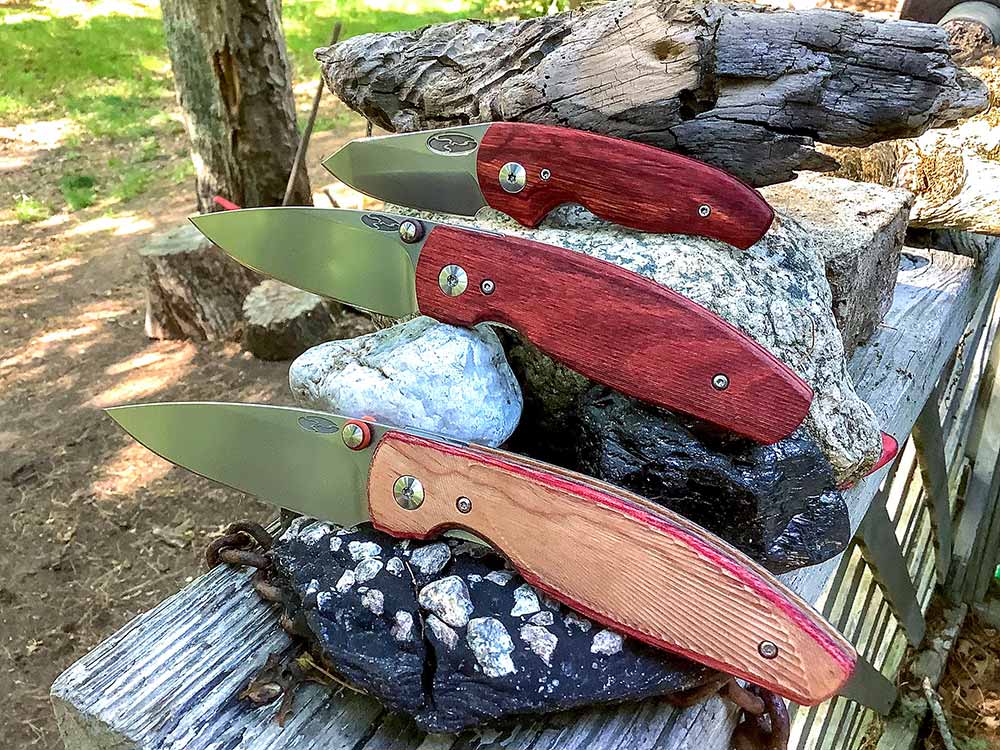 Many times, all you need to perform a scale swap is a simple set of Torx bits in common sizes. The IFixit kit is among the best, and many enthusiasts prefer bits from Wiha for their durability. An Ifixit kit with Wiha bits and a pry bar is available at www.knafs.com. If you don’t want to spring for the best, a simple Torx kit from a big box store will suffice.

If you want to tackle projects beyond a simple scale swap, the tools become more complex. Many custom handles can be built with simple hand tools, such as files, drills, and sandpaper. As the quality of your tools improves, so likely will the quality of your work.

Knifemakers who have a 2 x 72-inch grinder and a mill or drill press are well set up to modify just about any handle they choose. Whatever your interest and whatever your skill set, there’s a handle modification out there just waiting for you.