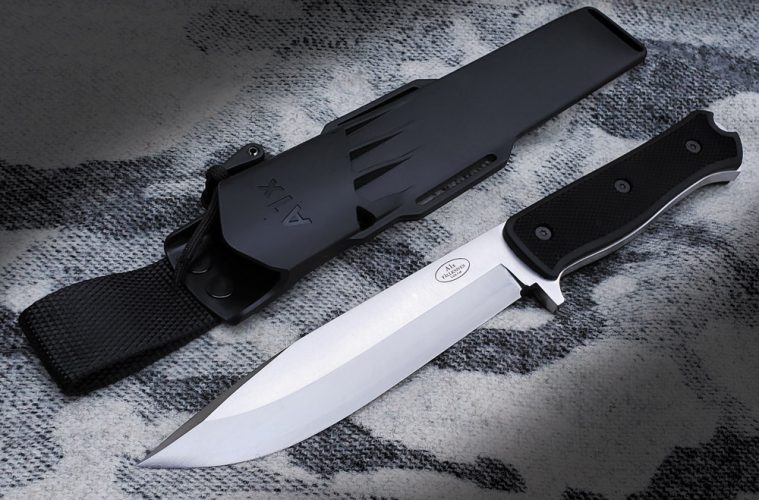 The Fällkniven F1 has earned its reputation as a solid survival knife. Its no-nonsense design is one of the reasons it became the official Swedish Air Force survival knife. Does the new Fällkniven A1x live up to this legacy? Read on.

While the F1’s size may be practical for some, the demand for a larger blade drove Fällkniven to produce the A1 as the company’s “Army” knife. Recently, the Swedish company released the latest generation of their knives, the “X” series, with thicker blades, handle construction, and new sheaths.

While we don’t want to start an Army or Air Force argument, we wanted to see if the A1x would exceed our expectations for a survival knife.

For many years, I carried the Fällkniven F1 as my standard bushcraft knife. I still own a couple that I use on backpacking trips now and again.

One interesting display was the original Swedish Air Force knife set in front of the current version, the reliable standard F1.

Prior to 1987, “the Swedish Air Force thought that they could run a zillion-dollar aircrafts while having a two-dollar knife in the leg pocket on their survival dresses,” according to Fällkniven owner Peter Hjortberger. “Essentially a common MORA knife with a simple guard, the Fällkniven F1 is a significant improvement in strength, handle comfort, and steel,” he says.

“In 1995, we could deliver several thousand F1 Pilot Survival Knives and the year after, the sale on the civil market started,” Hjortberger goes on to explain. Fällkniven has since offered the F1 in ATS-34, VG10 laminate, solid VG10, and 3G. (I tested the 3G only recently on one of my trips.) When compared against each other, the earlier pilot survival knife doesn’t inspire as much confidence as the latter. Fällkniven knives are known for durability. If pilots in Scandinavia’s harsh environment of Scandinavia can trust them, you can too.

Fällkniven designed the A1x for strength, and the thick 0.275-inch stock inspires confidence. But don’t associate this thick beast with the sharpened pry bars other companies put out. The convex edge was shaving sharp right out of the box. The blade measures 6.5 inches. That’s more than adequate length for wood splitting in cold or wet environments. The beveled swedge does not come to a false edge, and the drop-point tip retains a significant thickness for puncturing strength.

The blade comes with a clean satin finish, and the fully exposed tang is sandwiched between Thermorun handle scales instead of molded into a monolithic Thermorun handle. The contoured handle scales provide a cola bottle shape with a checkered grip pattern. The lanyard loop is at the tang’s rear-most protrusion. This positioning reduces the chance of the lanyard getting in the way during use. For someone who is well-acquainted with Fällkniven knives, handling the A1x for the first time was new and intriguing, as well as familiar and comfortable.

According to Peter Hjortberger from Fällkniven, “Because of the full tang and no ‘extras’ along the blade, these knives should be among the strongest stainless steel survival knives in the world.” We were eager to test and challenge his claim.

When we think of Sweden, we think ‘rugged environment.’ Picture the cold winter months with frozen lakes, deep powder snow, and more hours of darkness than light.

We wanted to test the Fällkniven A1x in an environment as similar as possible to a Scandinavian setting.  Fällkniven designed the A1x to be tough. Any test in a forgiving environment would be insulting. We received the blade in the middle of a cold snap with temperatures rarely spending much time above freezing. This meant that we did much of our testing with gloved hands. We wore the A1x over our outer garments and occasionally tucked in pack tunnel pockets exposed to the elements. We didn’t want to have to open outerwear to access this blade because the cold continually worked against us and our gear during this knife test. 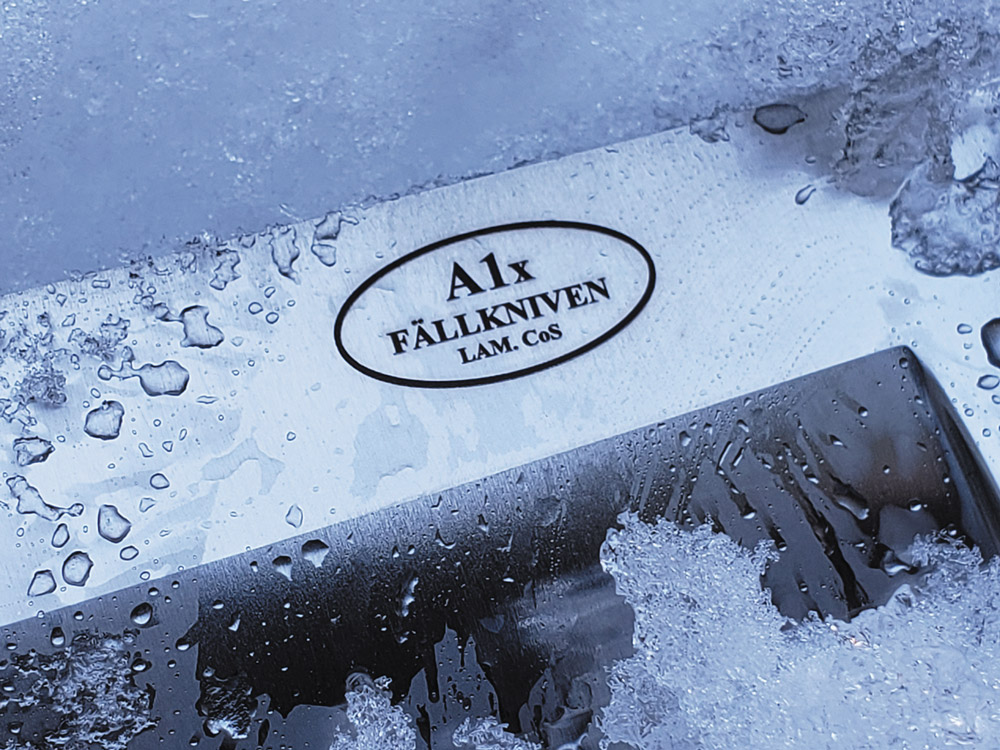 The thick 0.275-inch stock helps make this a very strong survival knife, especially because of its full tang construction. 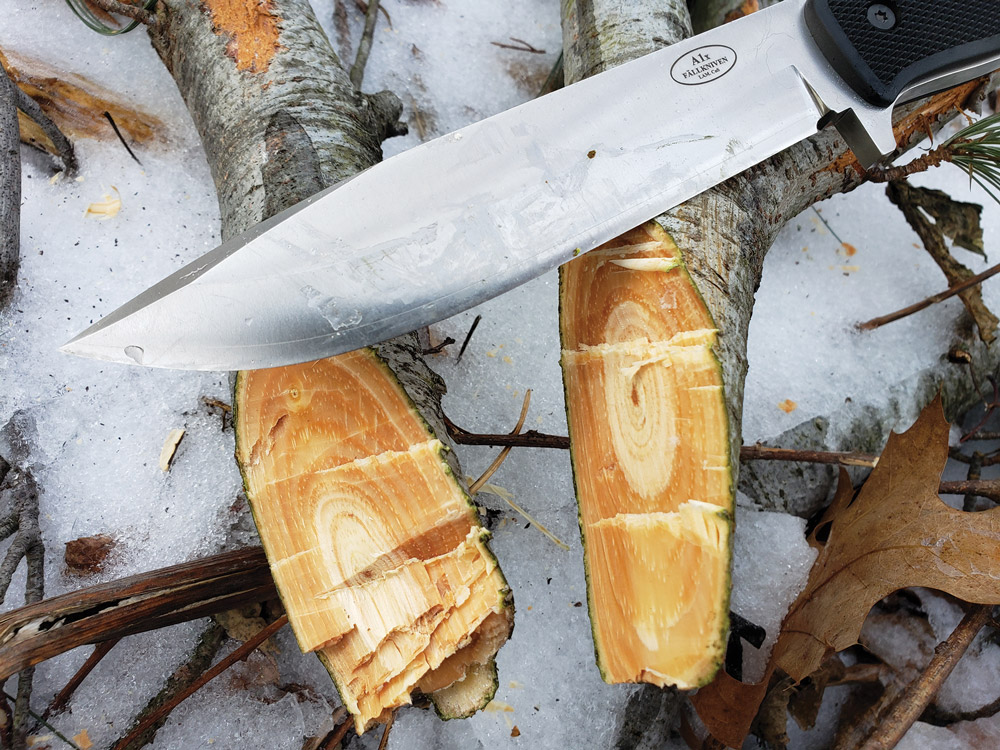 The heft of the A1x blade makes it an effective chopper for its size. It had no trouble cutting pine branches for a quickie winter shelter.

Winter survival is more problematic than warm weather endurance because of the low temperatures. The weather complicates everything. Keeping true to the theme of the Fällkniven A1x test, we realistically addressed survival needs. Because bodies of water freeze over, trapping both drinking water and food sources (fish), we put the A1x to the test by creating holes in the ice of a local pond. We chipped away at the ice, icepick style, to access the water underneath. Almost instantly, the water that coated our blade froze to it.

We attached a lanyard to the knife to avoid dropping it into the cold abyss. Using a baton on the exposed protrusion of a tang worked best and reduced the chance of breaking the tip with an errant thrust. It also kept us from riding the blade if we lost grip strength. We used only a very light baton force to get the tip of the blade to penetrate the ice. Despite the thickness of the blade, we easily thrust the A1x. We set up multiple fishing holes and drove the A1x unforgivingly through the hard ice layer, doing no damage to the tip or edge in the process. 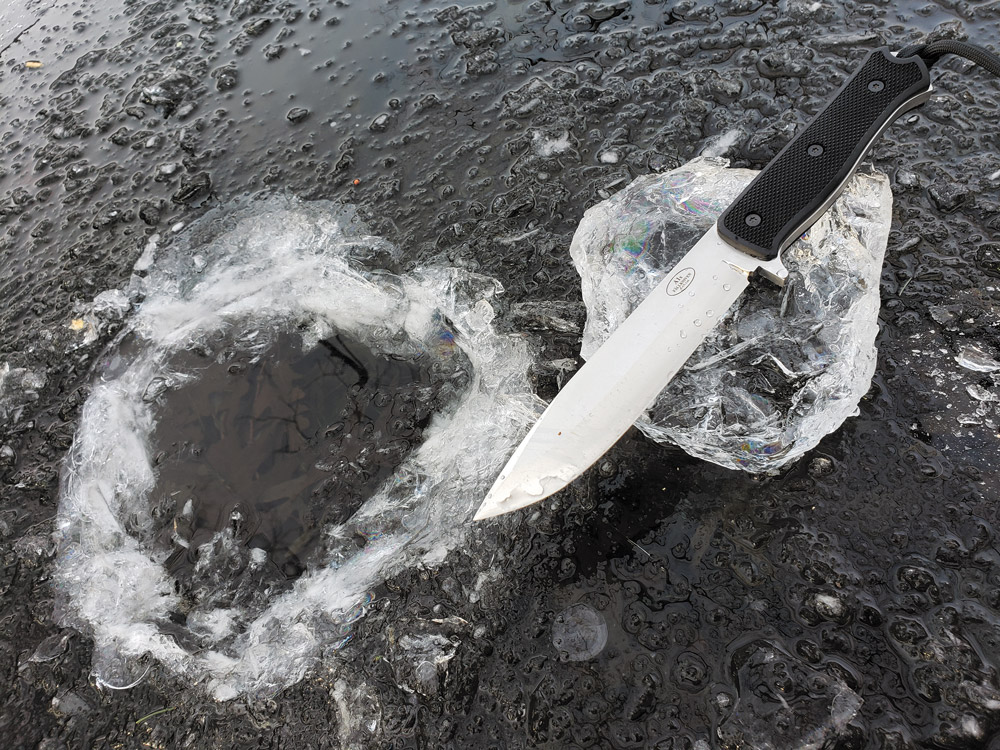 We created ice fishing holes with the A1x during the field testing of this knife.

The heft of the A1x blade proved useful when it came to building the frame of our winter snow shelter and for splitting seasoned wood. We choked back on the handle slightly and chopped 1-2 inch saplings without issue. The same was true of thicker pine branches we gathered from a larger tree taken down in a recent ice storm. We were able to quickly gather evergreen boughs for fire-starting platforms and bedding material. Instead of an ax, we used the A1x to split wood we bucked up to size with a saw. The saber grind shoulders split this wood easily with minimal binding. Splitting, quartering, and processing frozen oak, maple, and beech were not an issue. At over a 1/4 inch thick, this knife begs to be used for splitting and batoning.

Don’t let the thickness of the blade confuse you. This knife has a keen convex edge, and the sweet spot just forward of the self-guard is ideal for feathering sticks, carving notches, and slicing right through common cordage and webbing. If allowed only one fixed blade, the A1x works equally well for heavy-duty tasks and fine cutting. We used the A1x to collect wood, break it down into various fuel sizes, and spine scrape our ferro rod to address fire in the cold.

So many knife reviews (mine included) feature some sort of food prep as a test of slicing. We usually do this in a home kitchen or in the field in the comfort of an established camp. The frozen wilderness takes no prisoners, and even food items can quickly freeze. We didn’t have any luck with our ice fishing endeavors, so we used the A1x to slice up some recently harvested venison for the grill. We used the tip of the A1x to work under the silver skin of the venison backstrap we packed into the field.

We found the A1x performed respectably on semi-thawed cheese and sausages we ate while our meat cooked. The same thick shoulders that split wood well also split our veggies before we could slice through them. This knife is not a true kitchen knife, and thick slices may be a trade-off you have to live with for fantastic survival performance in other areas like chopping, splitting, and piercing. In a survival situation, the presentation of your food won’t matter as much as the calories you get, so we’re going to say we’re okay with how it performed in our makeshift wilderness kitchen. 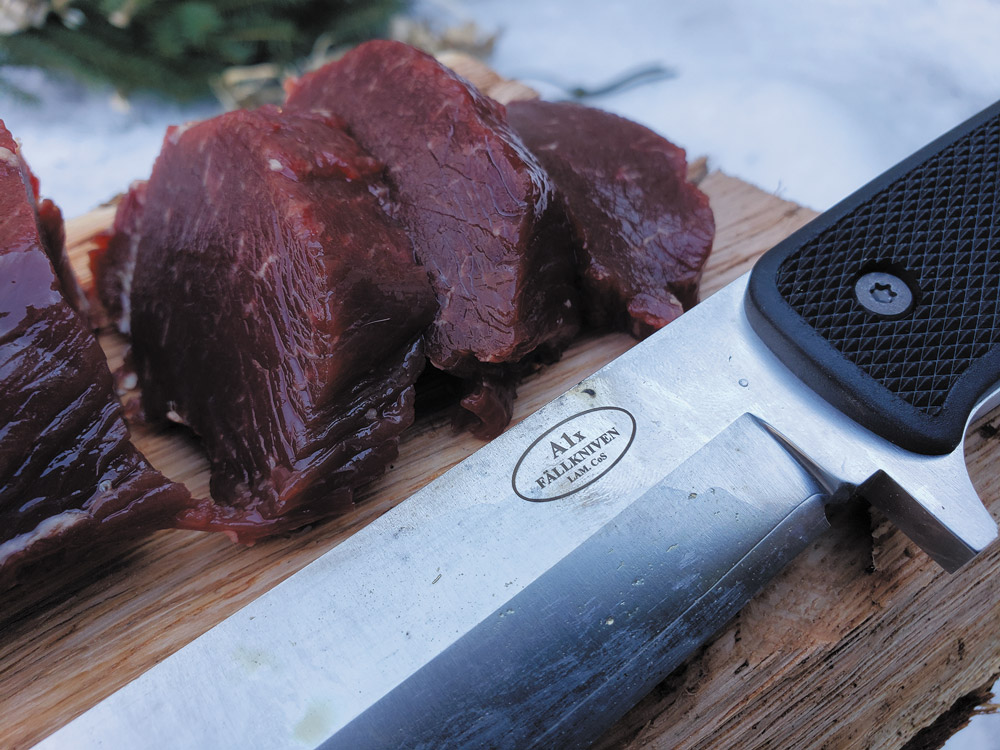 The author used the A1x to cleanly slice venison into smaller portions on a split log cutting board.

While the survival knife is the star of the show, let’s pay proper attention to the brilliant sheath locking mechanism. The sheath reminds me of the older generation Zytel sheaths with a nylon webbing drop loop, but with the addition of molded-in channels for additional straps on the body and a unique lock.

When you place that lock in the downward position, there is no chance you can remove the knife because the lock pushes the integral guard into the sheath body. When placed in the upward position, a forward rocking motion dislodges the blade from the sheath. The sheath’s fit is secure. There is a slight rattle between the knife and sheath when it is not attached to the body; however, once worn on the belt, one can’t reproduce that rattle, which is better tactically.

We tested the sheath thoroughly, including a retention test. No matter how hard we shook the knife and inverted the sheath, we couldn’t dislodge it. Even when we did a drop test, the lock would not budge.

“The sheath provides a two-lock system for carrying the knife safely on your body. After all, a lost knife can be the entire difference between life and death,” said Peter. We concur with this statement, and no matter what we did, we couldn’t “lose” the knife in our tests.

We also froze the knife and sheath during a winter storm that hit New England and never had an issue manipulating the locking mechanism. We noted no damage to the sheath from the cold. To make things more interesting, we used a spray bottle to wet the sheath, the knife, and the lock. While the water froze, the sheath functioned fine. The molded-in loops, in our opinion, are a great addition to the sheath design allowing the end-user to attach an aftermarket pouch to hold a small survival kit, sharpening stone like the DC4, or a multitool.

According to Peter Hjortberger from Fällkniven, the X-Series, “… represent(s) something new on the world market and no money was saved in our efforts in trying to provide the strongest, safest, sharpest stainless survival knives in the world.”

After our testing, we couldn’t agree more. This knife departs from the traditional construction of other Fällkniven blades, but it retains the familiar profile and distinctive look that made the company successful. This survival knife can chop, slice, split, pierce, and adequately address winter survival needs. The A1x and its brethren are sturdy, sharp, and trustworthy tools you can truly trust your life to, whether you’re in the wintery Swedish woods or some other wilderness. 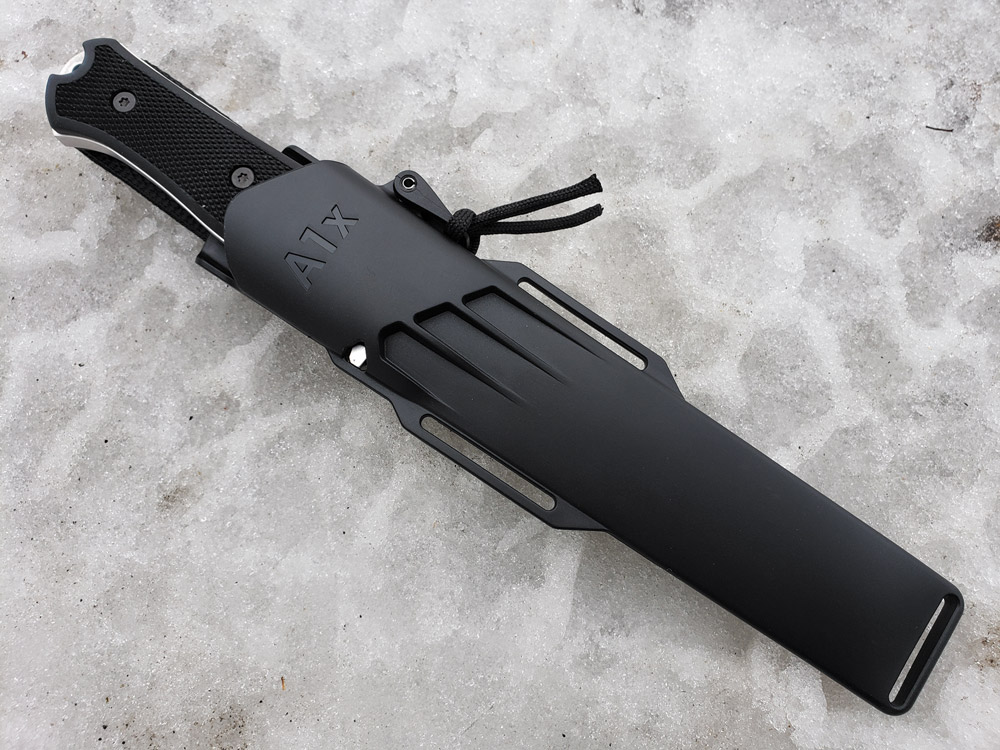 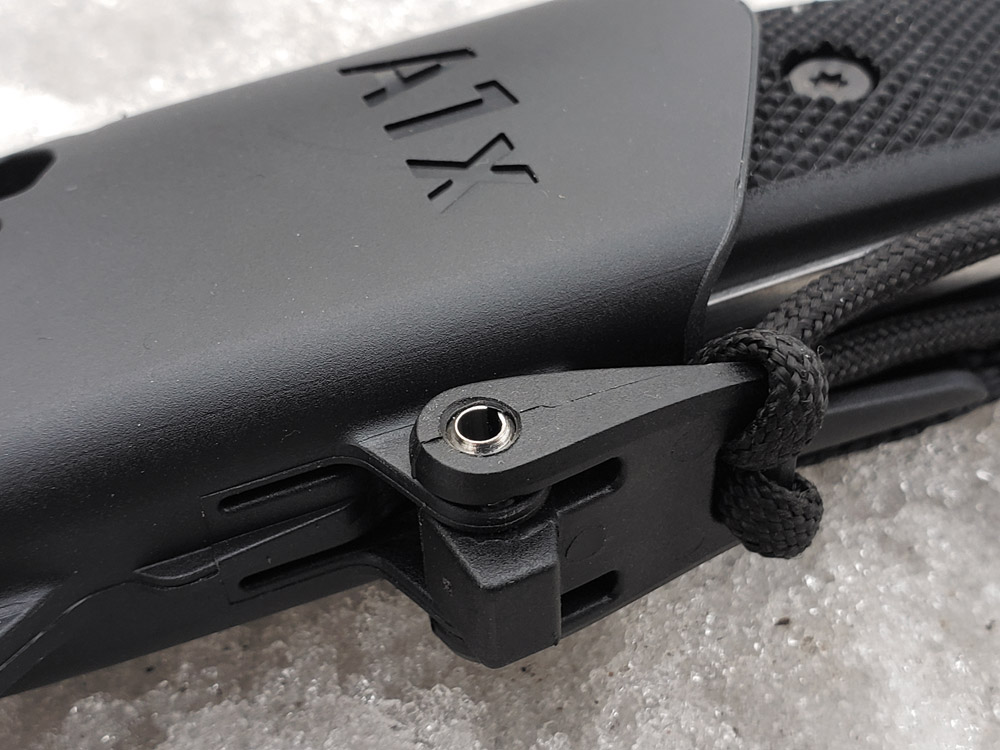 The A1x comes with an innovative sheath, locking the blade into place when not in use.