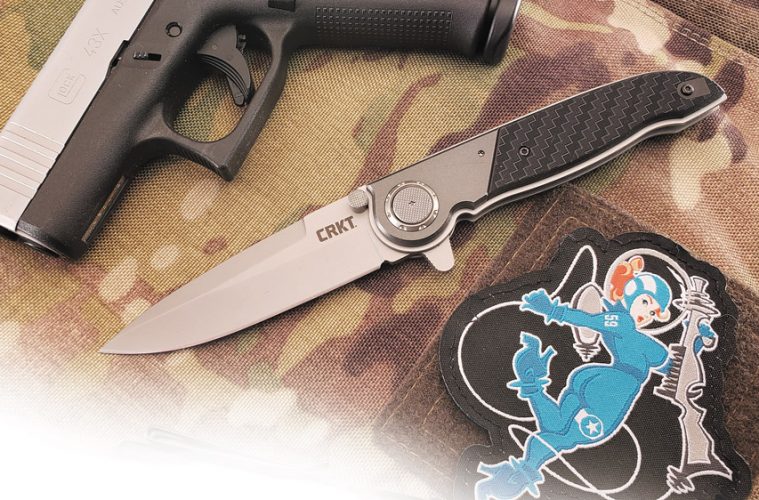 The spirit of Kit Carson has inspired the CRKT M40 Deadbolt.

If you’ve been around knives for any length of time, you can’t help but know the name Kit Carson. Kit was a 20-year Army veteran who retired as a Master Sergeant. He began making knives the year he entered the service—way back in 1972. Over the years, Kit became well-known for his custom folders with military- themed names like the M16, the M21, and the M4. Carson is even better known as a mentor to generations of knife makers, including legends like Ken Onion.

Kit began working with Columbia River Knife and Tool (CRKT) to introduce affordable production versions of his knife, which has ensured that everyone has access to his rugged and popular designs. The M16 and M21 from CRKT continue to be big sellers and are available in many varieties.

Kit passed away in 2014, but his legacy lives on in the hands of the craftsmen he mentored over the years and in his designs. One of those lesser-known designs, the M40, turned up in a private collection. The folks at CRKT worked with his son and daughter, Kody and Kristi, to bring a version of the M40 to fruition.

The internal engineering team at CRKT took the M40 and reimagined it with their Deadbolt lock, while keeping as close to Kit’s original design as possible. The result is the new CRKT M40, a thoroughly modern EDC folder using state-of-the-art tech mated to Kit Carson’s legendary design. 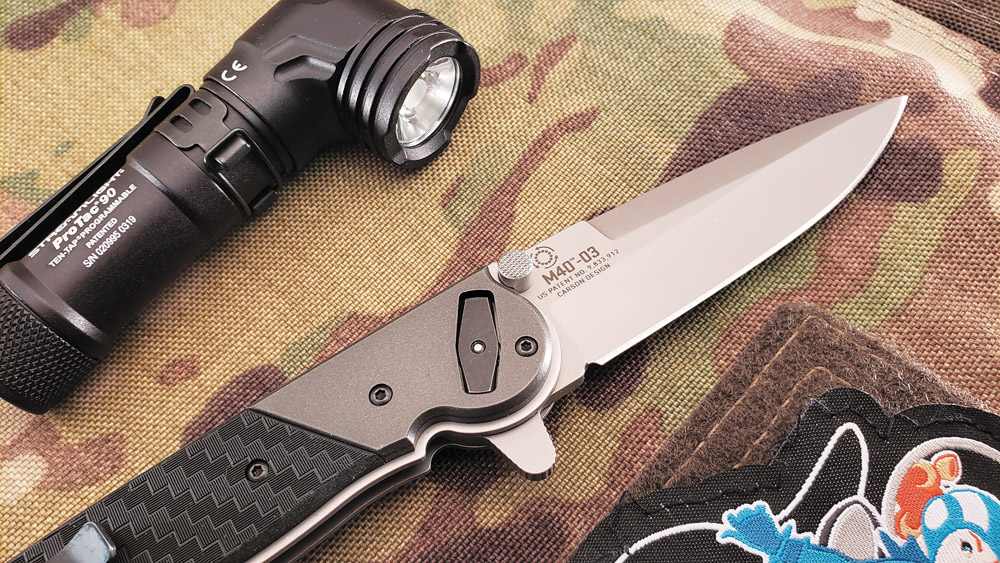 The M40-03 is one of the lesser known Kit Carson designs, reimagined with the CRKT Deadbolt lock.

Before I go into the details of the M40, you need to know there are currently three design variations CRKT offers. My test model was the -03, a plain edge spear point version. There’s also the -15, basically the same knife with Veff Serrations and a slightly longer blade, and the -02, a version with a slightly shorter tanto-style blade. Other than the blade style and variations, the specs are the same on all three versions.

The M40 has a blade of 1.4116 stainless steel at Rockwell of 55-57. This German steel is similar to American 420HC and provides a good mix of toughness, edge retention and ease of sharpening. The M40-03 has a 3.45-inch spear point blade with an unsharpened swedge that tapers to a fierce point. The blade is fitted with dual thumb studs and a flipper lever. It rolls open on CRKT’s famous IKBS Ball Bearing System, giving you a choice of opening methods. It has a CRKT marking on one side and the IKBS logo, model and patent number, and “Carson Design” on the other.

The M40 uses a stainless steel frame with an open-back design, which keeps dirt from accumulating in the knife and makes it easy to clean. The scales are glass-reinforced nylon with 6063 aluminum bolsters. They have a light texture and a carbon fiber-type pattern. The scales come just short of the edge of the frame.

The handle is 4.6 inches long, has a straight spine and contoured front, with the flipper acting as a small guard when the blade is open. A short, low-profile pocket clip is fitted for tip-up carry, and it’s reversible for right- or left-hand carry. At first glance, you could be forgiven for not realizing there’s a lock at all, until you go to close the blade. The Deadbolt is integrated into the pivot of the knife making it an extremely clean, low-profile design. Once you realize it’s there, simply depress the checkered, circular pivot head on the left side to disengage the lock.

Fit and finish on the M40 is excellent and everything has a clean, polished look. The blade is well-centered when closed, and locks up without play when opened. There are no sharp edges or corners to wear on clothing or cause hot spots during use. The M40s are manufactured in Taiwan and have an MSRP of $140.00. 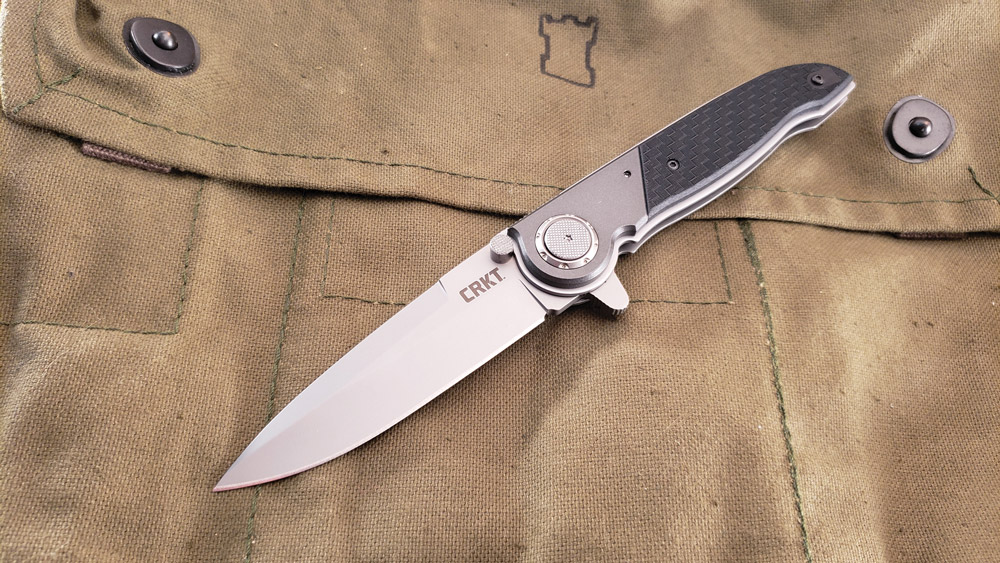 The M40 has sleek, clean lines, uninterrupted by a back, or liner lock. 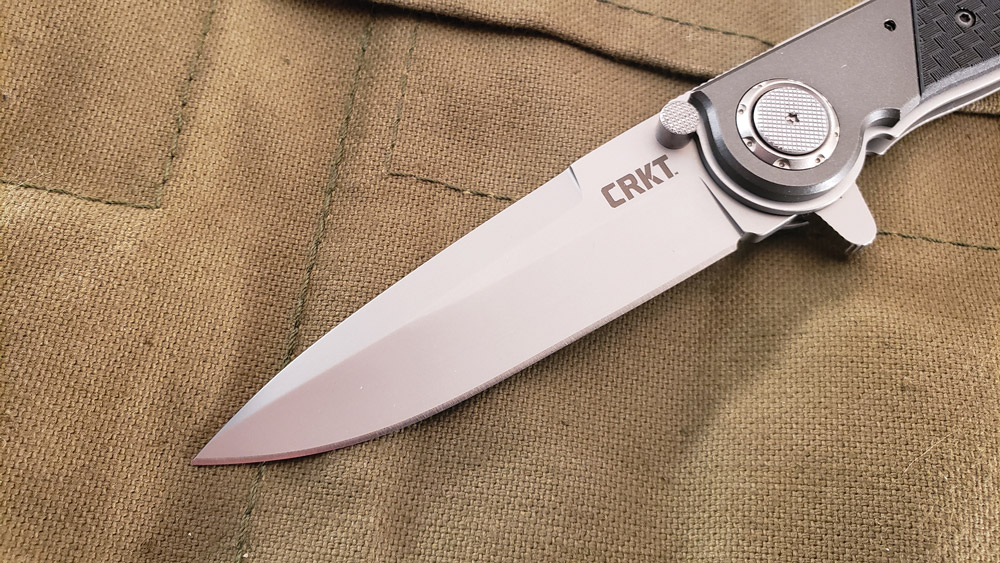 The M40 features a hollow ground spear point blade, with a false back swedge.

When you first pick up the M40, you notice its solid, workmanlike design. At 4.2 ounces you have a bit of heft, but nothing to weigh down your EDC kit. The knife is 4.6 inches closed and fairly compact. It rides well in the pocket of my jeans and uniform trousers. While I prefer tip-down designs, the M40’s low-profile pocket clip kept the knife secure and I had no issues with the blade opening up in my pocket or during draw, which has happened with some other tip-up designs over the years. I know a lot of folks prefer that orientation, but after being stuck numerous times and having holes in my pockets, I’m cautious. CRKT has done it right though, and I had no issues.

My M40 came with an impressive, hair-popping edge, and it held that edge throughout my testing. The 1.4116 isn’t a high-end super steel, but its solid. It’s been around forever, and it looks like CRKT has the heat treat down on it. When I was showing the knife around, one of the criticisms I heard was that you are getting “only” 1.4116 for a $140 knife. Honestly, that’s a legit criticism. You can get other knives in that price range with higher end steels.

But you aren’t just paying for the steel. You’re also paying for the engineering and the design — and it’s a great design. The Deadbolt lock is really growing on me with its strength and simplicity. There’s a cost to that. Could CRKT have used something like S30V or CPM-154? Sure, but the price would be even higher. They made a good compromise in mating the M40 design with a good, working steel to keep it at a price that people can afford. The M40 performed quite well and I probably wouldn’t have thought much about the steel choice if my buddy hadn’t pointed it out. Just go use your knife. It will be fine.

I mentioned the Deadbolt already, but I can’t emphasize the simplicity of this lock enough. Because it’s located in the pivot, the clean design doesn’t break up the lines of the handle like a back lock, frame, or liner lock would. There’s zero chance of inadvertently disengaging the lock, which can sometimes happen with other lock designs if you grip them tightly enough. I like that you can disengage the lock and close the blade without ever having your fingers in the travel path of the blade edge when you close it. You can even close it easily with one hand. The lock essentially uses two pins that engage in slots in the blade’s tang.

You can roll the knife open with the ambidextrous thumb studs, which also act as blade stops when the knife is open, or with the flipper. I’m a fan of the flipper method, so that’s what I generally used. Initially the mechanism was a bit stiff, but a quick squirt of Ballistol had things moving smoothly and efficiently. The M40 is fast to get into play and, even though I prefer tip-down carry, the tip-down orientation that CRKT uses allows your index finger to naturally fall on the flipper as you draw the knife from your pocket, allowing you to get it into play even faster. 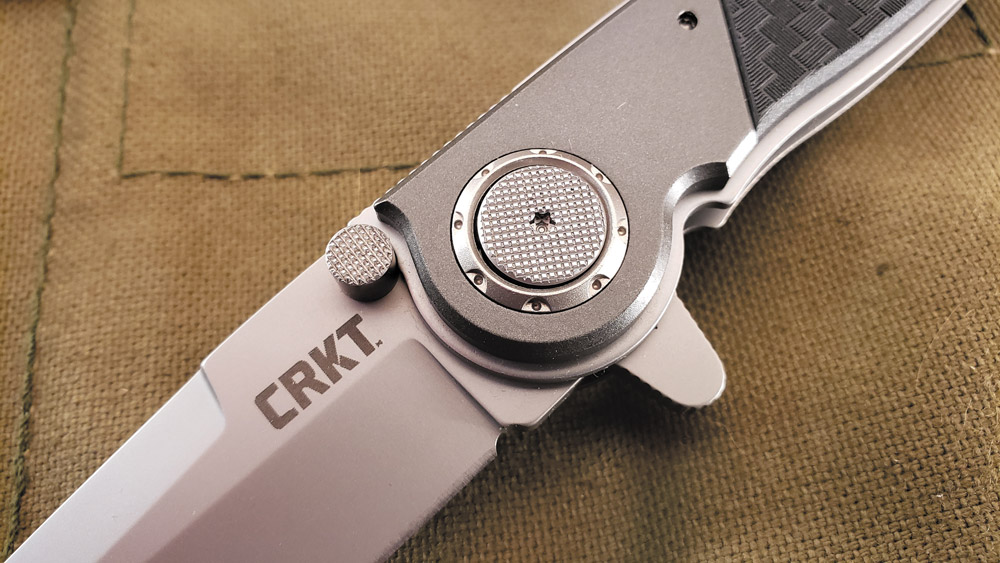 The M40 can be opened with either a set of dual thumb studs, or by means of the flipper.

I didn’t do anything unusual with the M40 while I was using it — it’s designed as an EDC knife and that’s what I did. I carried it every day for a month. I opened boxes, cut cordage and some webbing, used it for a bit of scraping and some casual whittling. There was some lunch prep in there, too.

I did take a few stabs at a stacked cardboard target to test the penetration and was pleased with the results. I easily sank the knife up to the hilt in the cardboard, thanks in part to the excellent spear point design and needle-like point. The flipper acts as a guard when the knife is open, and that worked well as a hand stop upon impact with my target. Although I primarily use my EDC folders as a utility item, I do like knowing they can also serve a defensive roll as a backup or weapons-retention piece, if I need to protect my handgun, either on duty as a police officer, or off duty.

I never had the chance to meet Kit Carson personally, but I think he’d be pleased with the M40. It’s a supremely functional design that’s only enhanced with the integration of the Deadbolt lock mechanism. Like his earlier collaborations with CRKT, the M40 allows the regular user a chance to buy and carry a Carson design and continue his legacy of solid design, based upon a lifetime of experience.