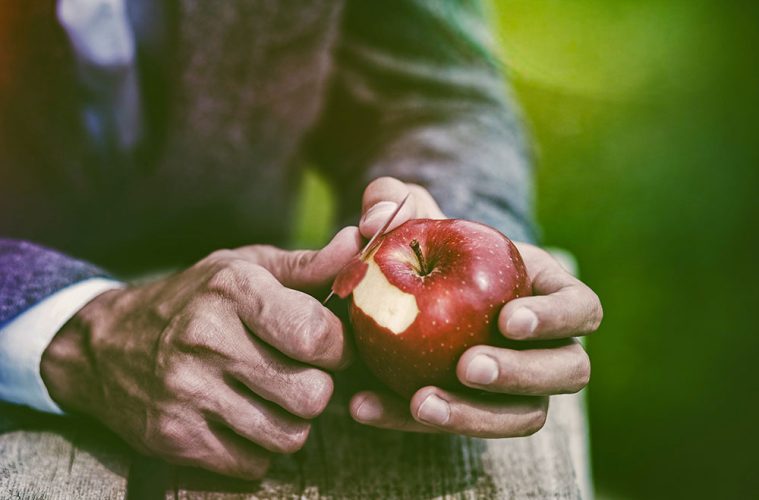 THE APPEAL OF TRADITIONAL FOLDING KNIVES

I saw this bit of wisdom posted on social media not too long ago: “If an old dude ever gives you advice while cutting an apple with a folding knife and eating pieces right off the blade, you should probably take it.” There’s probably more truth there than is found in most of the things that get posted online.

But, let me ask you a question. What sort of knife do you picture him holding? If I were a betting man, I’d say you’re not imagining some sort of ultra-tactical, automatic knife with a black blade. Instead, it is probably a well-worn, traditional-style pocketknife, right? 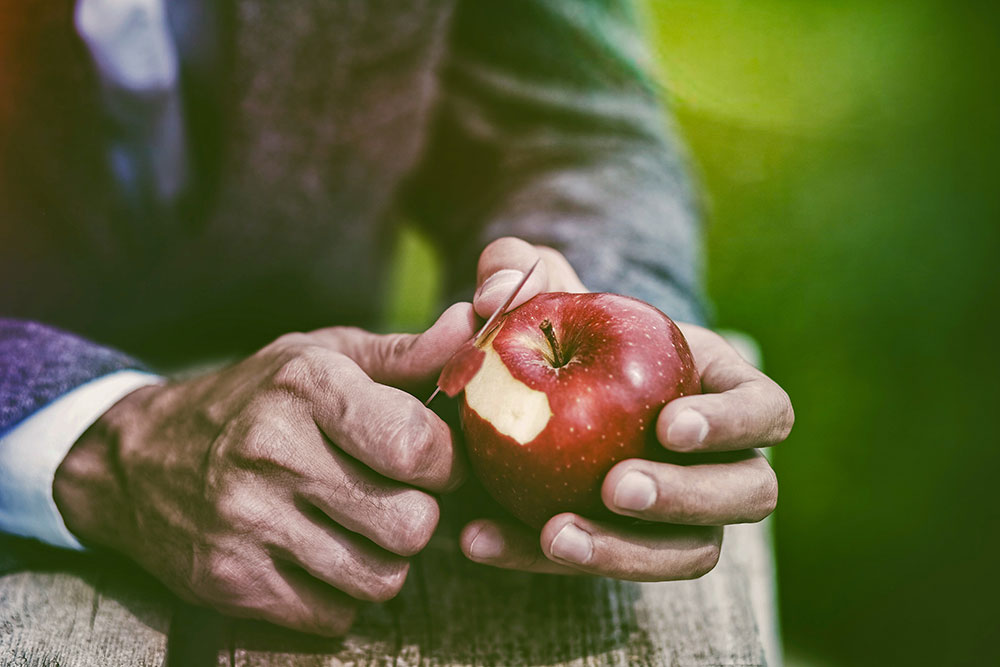 Now, don’t get me wrong. I love the military-styled folders as much as the next person. But there’s just something about an old-fashioned slip-joint knife, something your dad or granddad would have carried every day and used for everything from cutting rope and electrical tape to slicing up summer sausage for lunch. These types of knives call to mind earlier, perhaps simpler times.

In addition to great looks and functionality, these knives have another advantage in that many of them are fairly affordable. Like any type of knife, the sky’s the limit if you have money to burn. But you can find great-quality traditionally styled folding knives that don’t have heart-stopping price tags.

Several styles of knives fall into this category or niche.

The stockman has three blades total. The main blade is usually a clip point, accompanied by a spey as well as a sheepsfoot. This is among the most common of folding-knife models, and most manufacturers have one or more of them in their lineup. With the diverse blade profiles, this knife will handle just about any common chore. The clip point is essentially all-purpose, but with a sharp point for piercing tasks. The sheepsfoot is excellent for opening boxes and for shallow slicing. The spey was originally designed for castrating cattle. If that’s not on your to-do list, you’ll still find plenty of use for it, such as peeling fruit at lunchtime.

“The spey was originally designed for castrating cattle.” 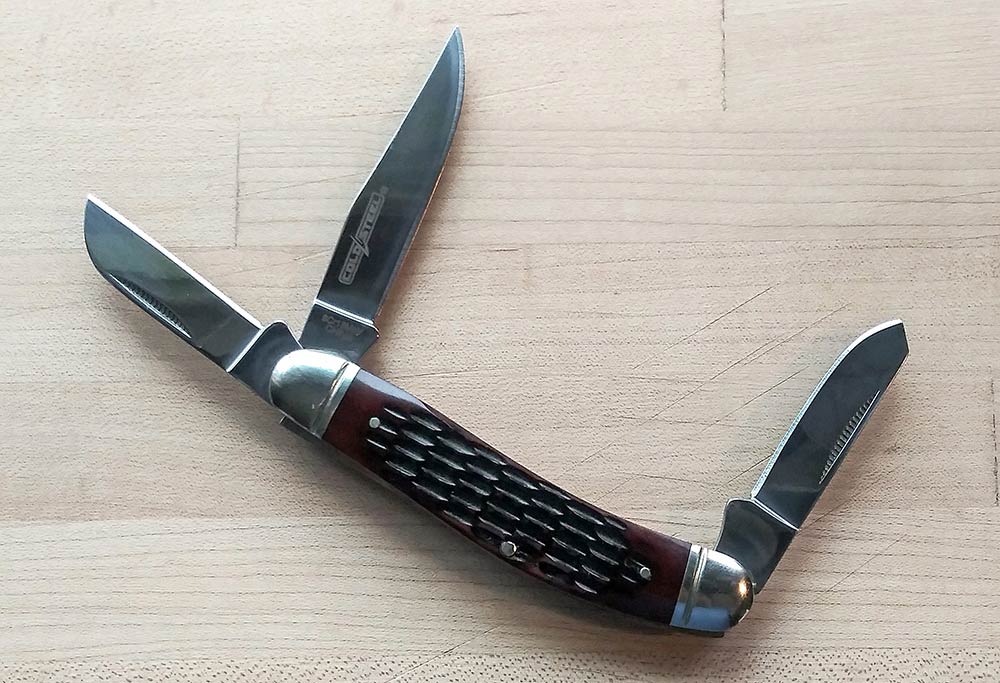 The stockman’s three blades will handle just about any common knife chore you can imagine.

Cold Steel built a reputation on making hard-use knives, with all sorts of extreme torture tests being done with their products. Over the years, they branched into a wide range of blades, going far beyond the original tantos and what not. Their Gentleman’s Stockman is a perfect example of this style of knife. It has three blades: clip point, spey, and sheepsfoot. All three are 8Cr13MoV steel. The curved handle is comfortable, no matter what you’re using the knife to cut or slice.

It is available in a few different handle colors, but the jigged bone shown here is particularly handsome.

This is a two-blade knife that, when closed, somewhat resembles a canoe in shape. The handle is a bit curved and the bolsters at each end accentuate that curvature. It is a very comfortable knife to use, and it has great ergonomics.

The large bolsters not only add to the visual impact, but they also tend to cover any protruding sharp points on the blade tangs so they don’t cause problems with snagging in the pocket.

While early models varied a bit, the current standard is to have one clip point blade and one pen-knife blade that are mounted opposite to each other.

Notice how the ends of the canoe curve upward a bit, giving the handle its distinctive profile.

The Buck 389 is a classic example of a canoe knife. There are two blades: the larger a spear point and the smaller a pen blade. As with all Buck knives, it has a robust build and is ready for real-world use and abuse. Closed, it is 3.625 inches from end to end, so it is on the smaller side when it comes to folding knives. This makes it a great option for those who don’t want to be weighed down but still want a great-quality knife in their pocket.

This is the first true jack knife on our list, as the two blades in the trapper knife are mounted on the same end of the handle rather than from opposite sides. While there is some variance, most commonly the trapper has a clip point blade and a spey blade (sometimes referred to as a trapper blade).

The latter is a pattern that many have put to use skinning game. The clip point blade on this model tends to be fairly narrow and very adept at piercing sorts of tasks. The body of the trapper has a squared end at the pivot point and a rounded bolster at the other end.

The trapper is a true jack knife, with both blades pivoting from the same end of the handle.

This Culpepper from Kershaw is a modern take on the classic Barlow knife.

Case has dozens of trapper-style knives, but I’ll admit that I’m a sucker for a blue handle on a knife. The ocean blue scales are attached to the knife with brass pins and brass liners. The clip point and spey blades are perfect for a huge range of chores. At 3.8 ounces, the knife has a little heft that gives it a solid feel when in use.

Whether you spent time in a scouting program or some other adventure, you’ll either think of the classic Boy Scout knife or the ubiquitous Swiss Army Knife for a good representative in this category. Either one will work. The basic idea is that other tools are onboard in addition to a cutting blade, such as a can opener, bottle opener, and screwdriver. Some might say that these were the original multitools.

Whether that’s technically true, there’s no arguing about the usefulness of these pocket-size tool kits.

“The congress knife was predominantly found in the southern United States, where it was used on farms and plantations, particularly in places where tobacco was grown and harvested.”

The four blades on this congress from Boker are thin, but that makes them great for slicing.

Victorinox has produced countless different models of its famous Swiss Army Knife. The Hiker is particularly well-suited for use in the field due to the onboard wood saw, one that actually works very well.

For all the functionality of the Hiker, I will confess that I’m still partial to the old Boy Scout knife and I’d be hard-pressed to choose between the two if I could only own one of them.

This knife has sort of a teardrop-shaped handle, with one or two blades pivoting from the smaller end. They’ve been in production since the 1600s. George Washington allegedly had one as a young man, and Mark Twain mentioned this style of knife in “The Adventures of Huckleberry Finn.”

Traditionally, the Barlow was a commoner’s knife; nothing fancy, but something that would handle day-to-day chores. 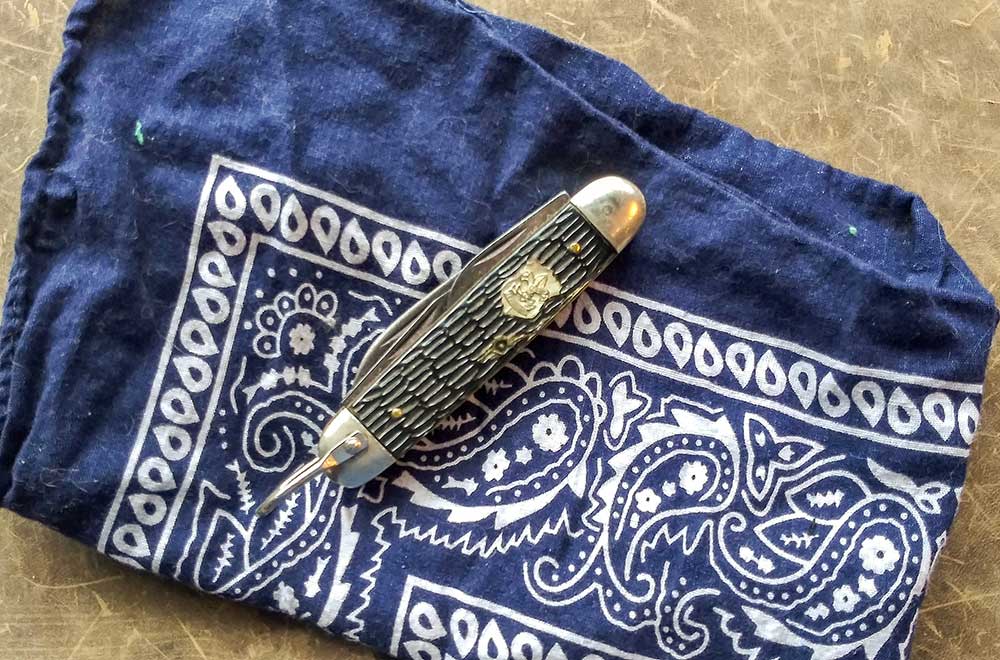 Once upon a time, pretty much every boy in America had these two things in his pocket every time he left the house: a handkerchief and a pocket knife.

The wood saw on the Hiker from Victorinox has sharp, aggressive teeth that chew through branches quickly.

The Culpepper is a modern take on a classic design. It is a single-blade slip joint. The clip point blade is 7CR17MoV steel. The black G10 handle scales are accentuated by brass liners and rivets. A bit of jimping on the blade’s spine near the pivot point provides added control for detail work. There’s also a lanyard hole for those who prefer to add such adornments to their knives.

This is a four-bladed folding knife, with two blades anchored to each end. The blades all fold together in the middle of the handle; thus, they are in congress. Typically, it includes three sheepsfoot blades of varying lengths plus a pen blade.

The congress knife was predominantly found in the southern United States where it was used on farms and plantations, particularly in places where tobacco was grown and harvested. Having two large blades, a farmhand could complete twice as much work before needing to sharpen the knife. 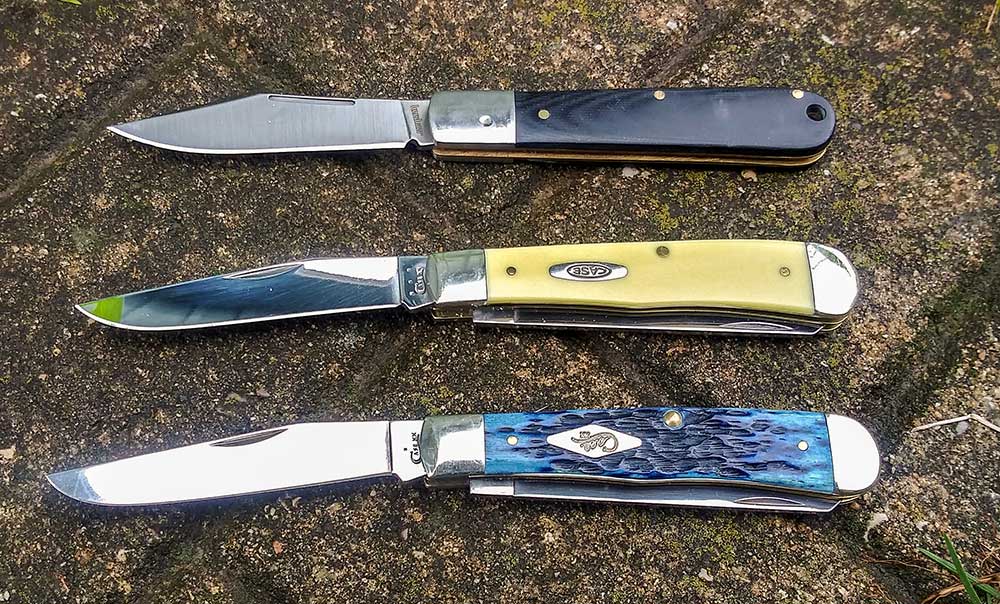 These traditional-styled folding knives from Kershaw (top) and Case (middle and bottom) are inexpensive but will last a long time.

The synthetic yellow handle has an aged or vintage look right out of the box. All four blades are sharp but decidedly thin. This is great for things like whittling or cutting up fruit, but you can’t expect to use it for heavy-duty tasks. It just isn’t designed for rough and tumble use. That said, it is an excellent option for sort of a gentleman’s carry folding knife.

Other models are in the traditional design lineup, including the pen knife and the peanut. At the end of the day, the classic folding knife, free of bells and whistles such as assisted opening or matte black blade finish, is an excellent addition to the EDC lineup.

Unlike their tactical counterparts, they are rarely seen as weapons and can often be carried in areas that would otherwise frown upon a knife. These sorts of folding knives have been in use for over 600 years and there’s no reason to give up on them now.

“At the end of the day, the classic folding knife, free of bells and whistles… is an excellent addition to the EDC lineup.” 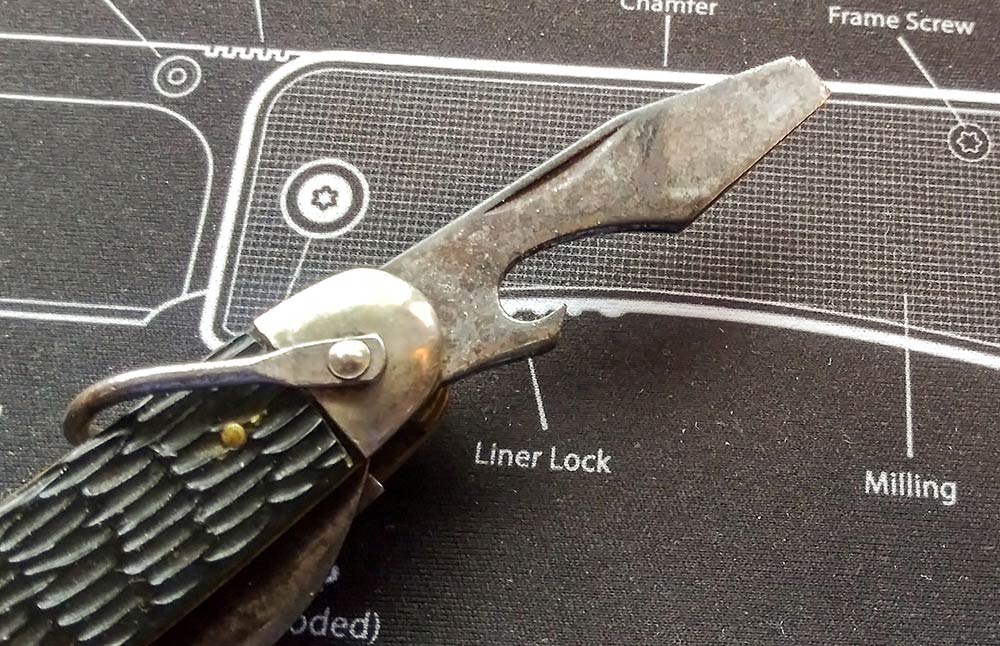 The author has always been fond of the large screwdriver on the Boy Scout knife as it mak es a great mini pry bar.

With the exception of the barrel knife, all of these are slip-joint knives. This refers to how the knife operates. In a slip-joint knife, a flat bar called a backspring rests on the bottom of the handle. When a blade is pivoted out from the handle, this spring first tensions the blade so that it wants to remain closed.

Then, once the blade reaches a certain point, typically the 90-degree mark, the tension reverses and the blade pushes to be fully opened.

A slip-joint knife doesn’t usually lock in place. The blade is held there by the backspring, but it can obviously be folded closed with just a little pressure. This is important to remember as you don’t want the knife closing on your fingers while you’re using it.

This one is a kissing cousin to the others on our list. The barrel knife design hails from Sweden, though it was later produced in several other countries.

The model shown here bears a stamp from Segerstrom and was made sometime prior to 1925. This is a decidedly interesting design, though cumbersome for those who are used to just flipping a blade open. 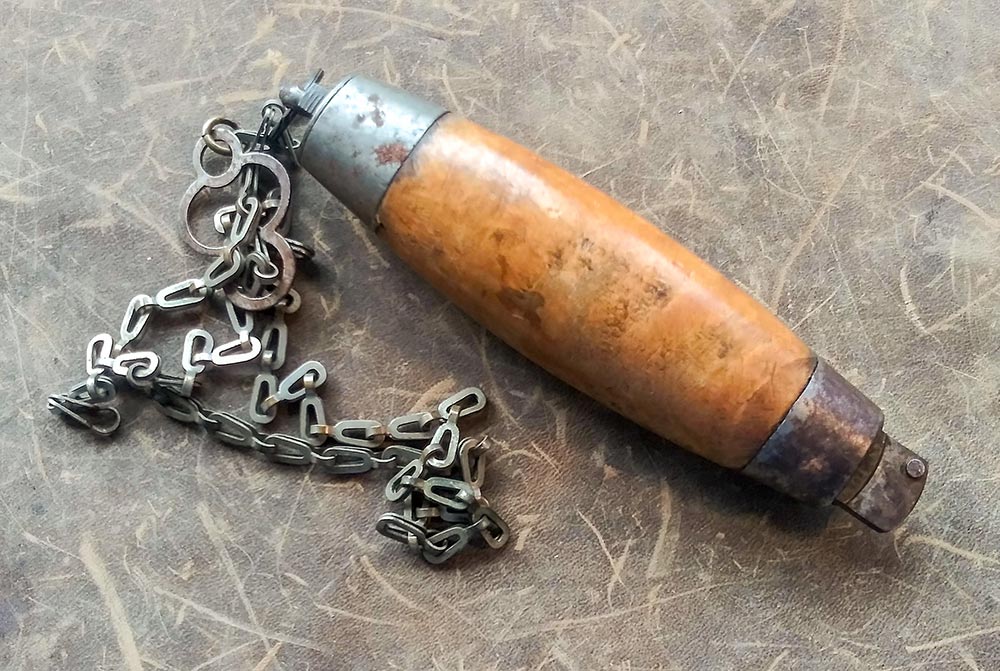 This barrel knife hails from Sweden and is an interesting take on a folding knife. 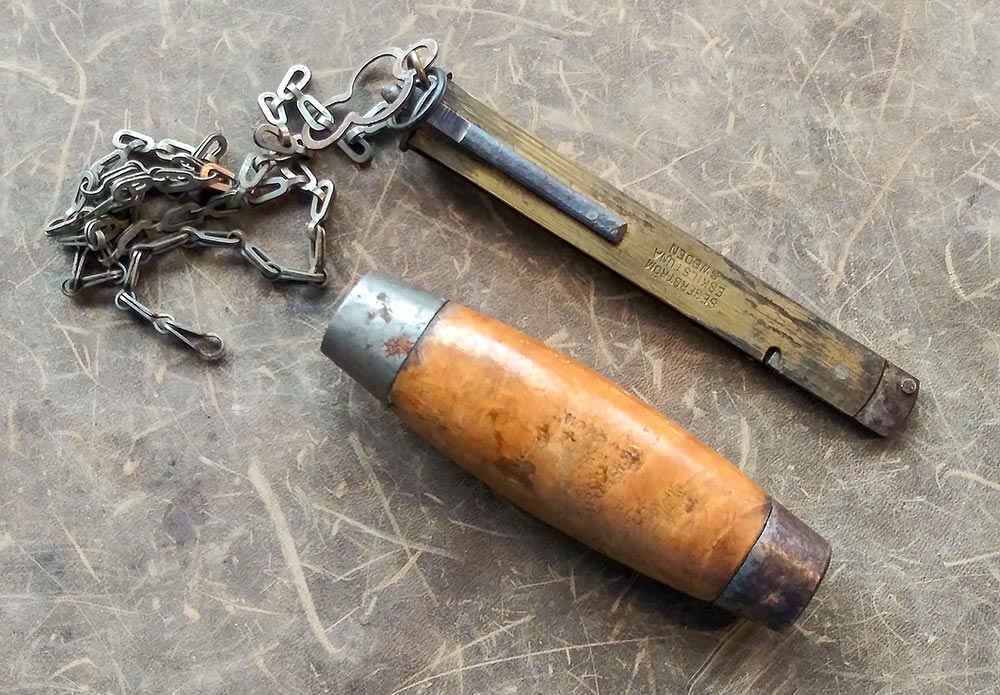 Remove the blade assembly from the handle. 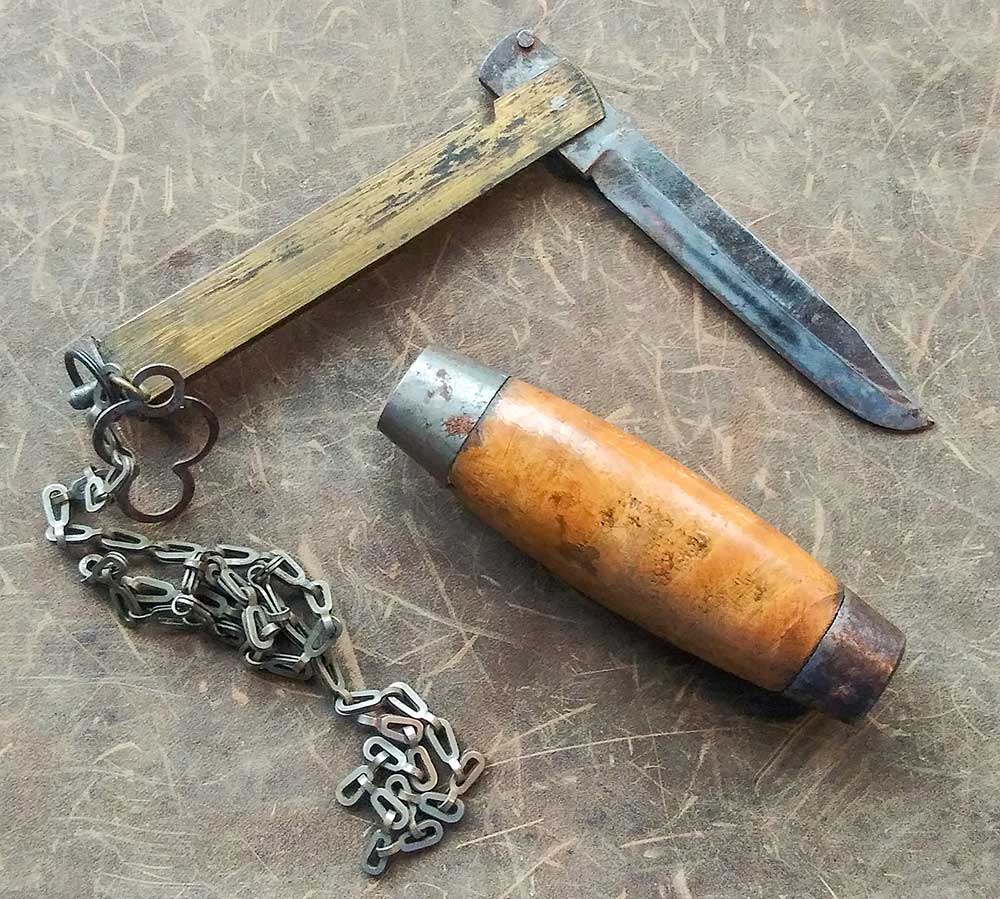 Fold the blade open until the peg rests in the notch. 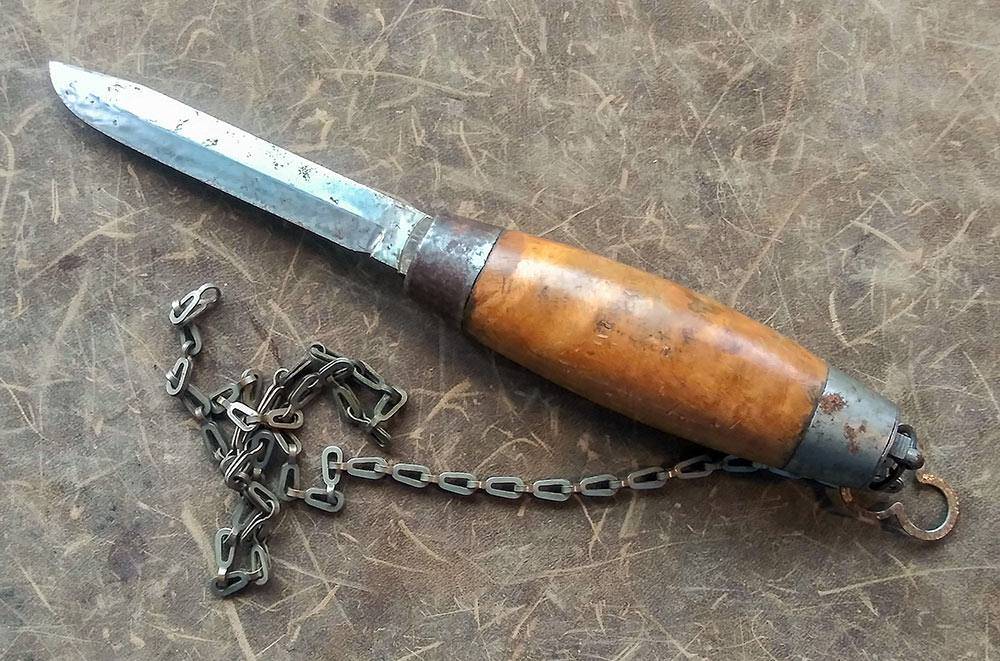 Slide the assembly back into the handle for use.

To operate, you must depress the small lever catch and slide the knife assembly from the wood body, and then manually open the blade and insert the whole thing back into the body. The process is reversed to close the knife.

While not nearly as popular for regular use as, say, a Swiss Army Knife or a trapper, the barrel knife is a fun design and has found a home with some collectors.

A version of this article first appeared in the November 2022 print issue of Knives Illustrated.