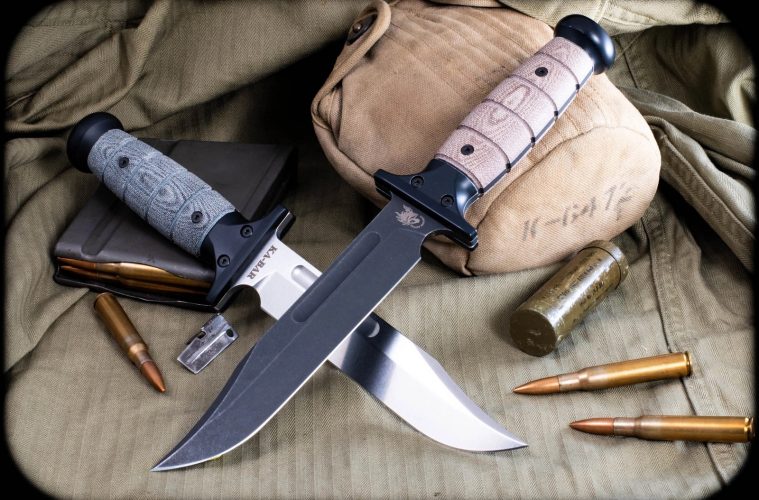 In honor of the 75th anniversary of the ending of WWII, Rick Hinderer Knives has released their new commemorative “KA-BAR” fixed-blade knife. This is the company’s own take on the iconic knife that was used by our military forces during the war. While the war officially ended September 2, 1945 and the 75th Anniversary would have been last year, this knife has been worth the wait. 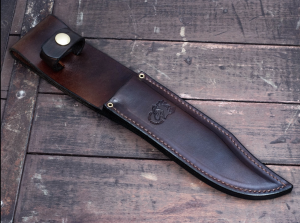 A custom premium leather sheath by Woodland Harness comes with the Hinderer knife.

The KA-BAR Knife is Reimagined History

Back in November of 1942, the United States Marine Corps adopted the 1219C2 Combat Knife that later changed into the USMC Mark 2 Fighting Utility Knife. While it was produced by several manufacturers, the name of one — KA-BAR – stuck, and all of those knives regardless of maker became known to our soldiers as “KA-BARS.” Our servicemen used and relied on this knife on a daily basis throughout the war effort.

According to Rick Hinderer, “I did not want to make a direct copy of the KA-BAR, but rather my interpretation of this iconic knife.”

This knife features a choil at the rear of the blade and micarta handle material instead of the original stacked leather washers.

This KA-BAR is Made of 01 Tool Steel

This new KA-BAR rendition measures 12.08 inches overall in length. The blade makes up 7 inches of that length. The blade is constructed with 01 Tool Steel, 3V and is 3/16-inch thick. The bolsters and butt cap are created using 6061 Aluminum Type 3 hard coat anodized black. The hardware of the knife is 303 stainless steel that is custom made on site at the company. The MSRP for this commemorative knife is $575. 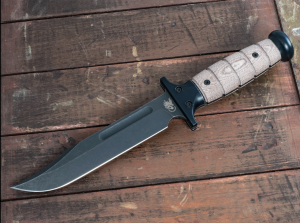 The Hinderer “KA-BAR” knife comes a choice of micarta handles instead of the original stacked leather washer grip.

Hinderer Knives For Hard Use

Back in the mid 1980s, Rick Hinderer started making knives by producing art knives in a small 14 x 18-foot turkey coop. His inspiration to change from art knives to tactical knives came after he joined a rescue dive team. With his practice of designing art knives along with his real-world experience, it helped him to design hard use and tactical folders. To learn more about the Hinderer version of the World War II KA-BAR knife and more, go to www.RickHindererKnives.com.

And be sure to check back with KnivesIllustrated.com for more of the latest news from the knife industry.

Hardware: 303 SS custom made at RHK