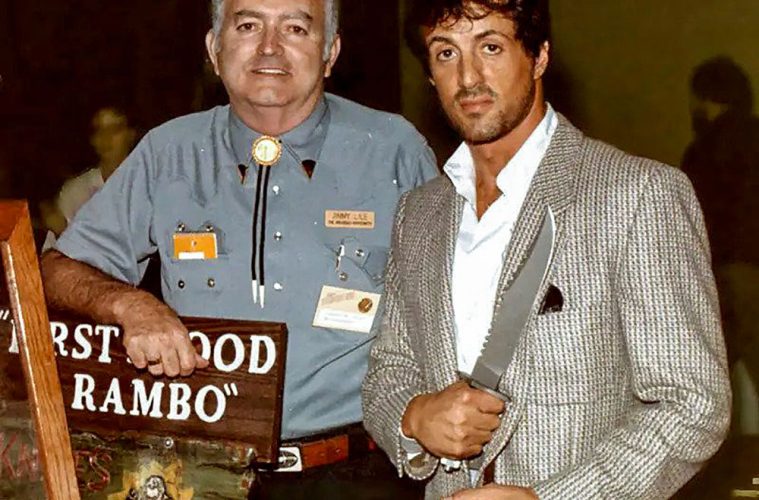 THESE SURVIVAL KNIVES WERE ONCE POPULAR

FROM TOP-OF-THE-LINE MODELS TO CHEAP KNOCKOFFS, THESE SURVIVAL KNIVES WERE ONCE POPULAR

Iwas barely a teenager the first time I saw “First Blood,” my dad having brought the VHS home from a rental store. Like so many people at the time, I was immediately drawn to Rambo’s knife. It had dramatic lines and came complete with survival gear stored in the hollow handle. I’d never seen anything like it before.

“While they aren’t nearly as popular today, for a brief period hollow-handle survival knives were all the rage.” Shortly after seeing that movie, I learned it was Jimmy Lile who had designed and produced the Rambo knife. That took a little research, given that this was years before the internet would become commonplace. It took even more time and effort to track down a telephone number for him, but I managed that as well. (Sadly, I chickened out when calling him, something I regret to this day.)

While hollow-handle survival knives had been around for a while, it wasn’t until Stallone’s fateful turn as the pushed-too-far former Green Beret John Rambo that they became well known. It wasn’t long before countless different models hit the market, many of dubious quality. 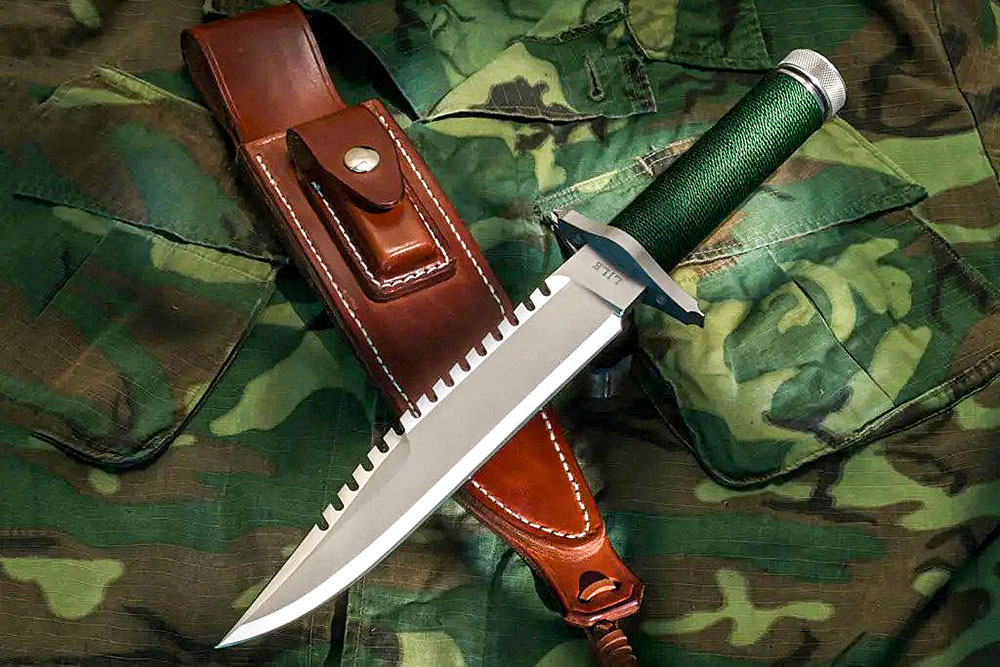 The one that started it all, the “First Blood” knife created by Jimmy Lile. JimmyLile.com photo.

The Randall Model 18 predates the Rambo knife a bit, having gone into production in the early 1960s. It became popular with troops sent to Vietnam. Originally, it was made with a smooth handle that was wrapped with cordage. Later models offered a checkered handle, which could still be wrapped if the user desired. 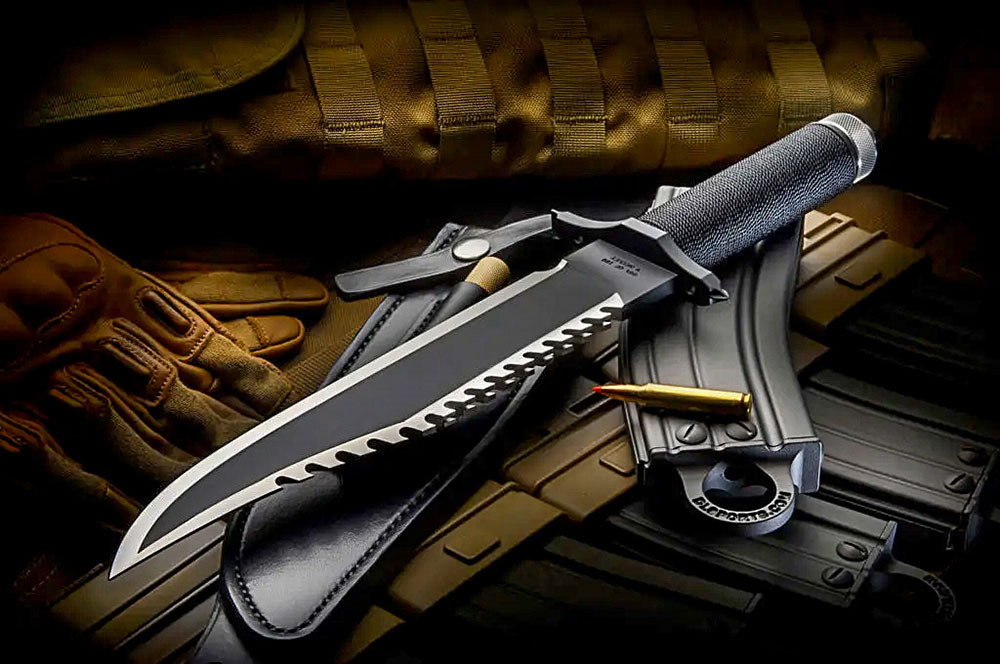 The knife from “First Blood II,” called the Mission knife, was a bit larger than the original. JimmyLile.com photo.

The idea was to provide a robust survival tool to pilots and crew members in case their planes went down in the jungle. To that end, the spine of the blade was outfitted with saw teeth that could be used to tear through the side of a plane, saving the blade’s sharp edge. The handle was hollow and used to store a few survival essentials, such as waterproof matches, fishhooks and line, and water purification tablets.

The Model 18 is still in production today and carries a hefty price tag. Vintage models from the Vietnam era pop up from time to time on the secondary market as well.

In 1981, Sylvester Stallone approached Jimmy Lile about designing a knife for his new movie. He instructed the already legendary knifemaker to create a truly useful tool, rather than just make something that might look neat on film. Lile imagined what it would be like to be stranded somewhere with just a knife and started piecing together what that knife would need to accomplish. It isn’t a stretch to figure that Lile looked at the Randall Model 18 for some inspiration. 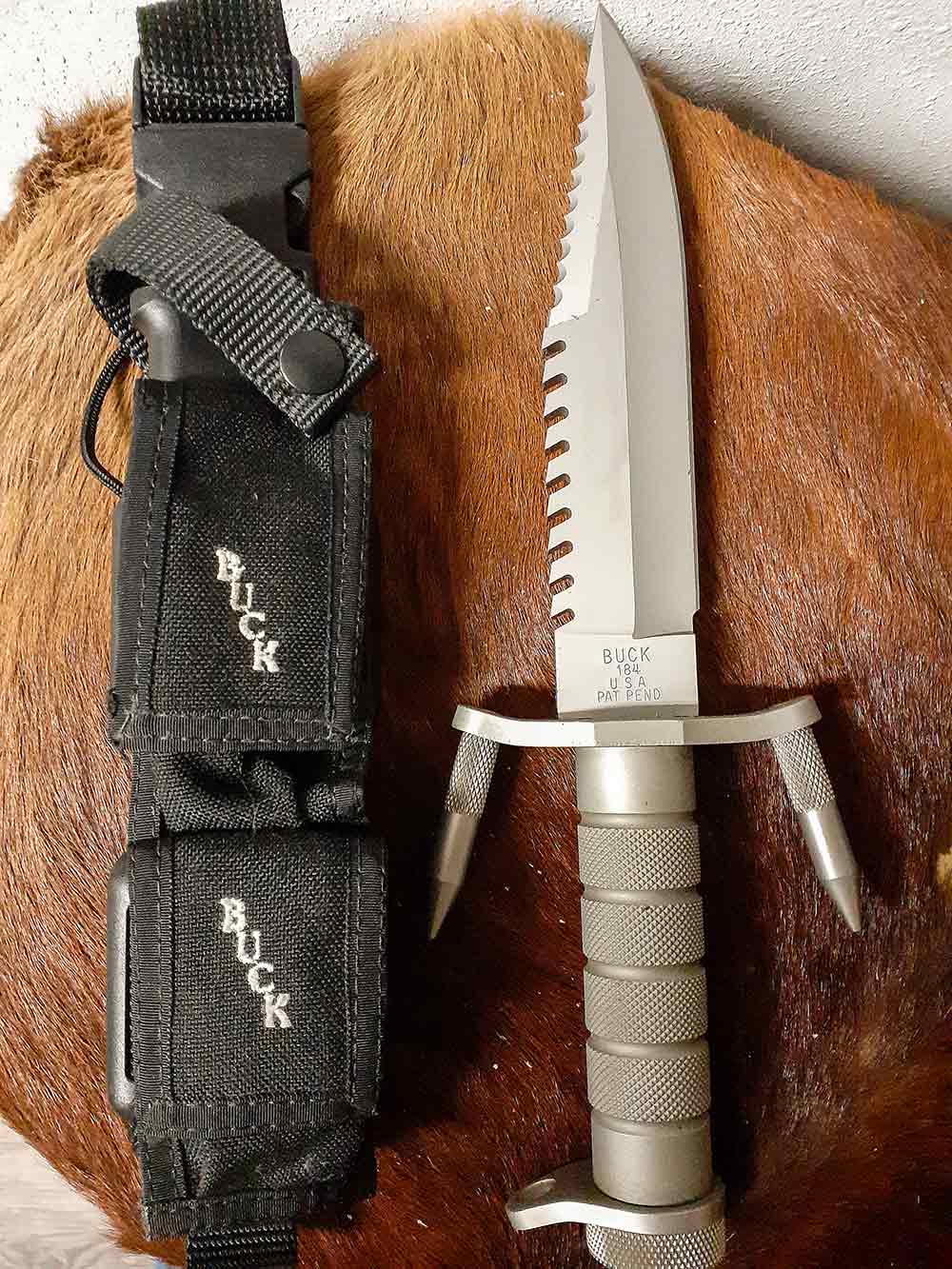 The BuckMaster had two spikes that screwed into the guard. This was a feature unique to this knife and was always eye-catching. James Carlisle photo. 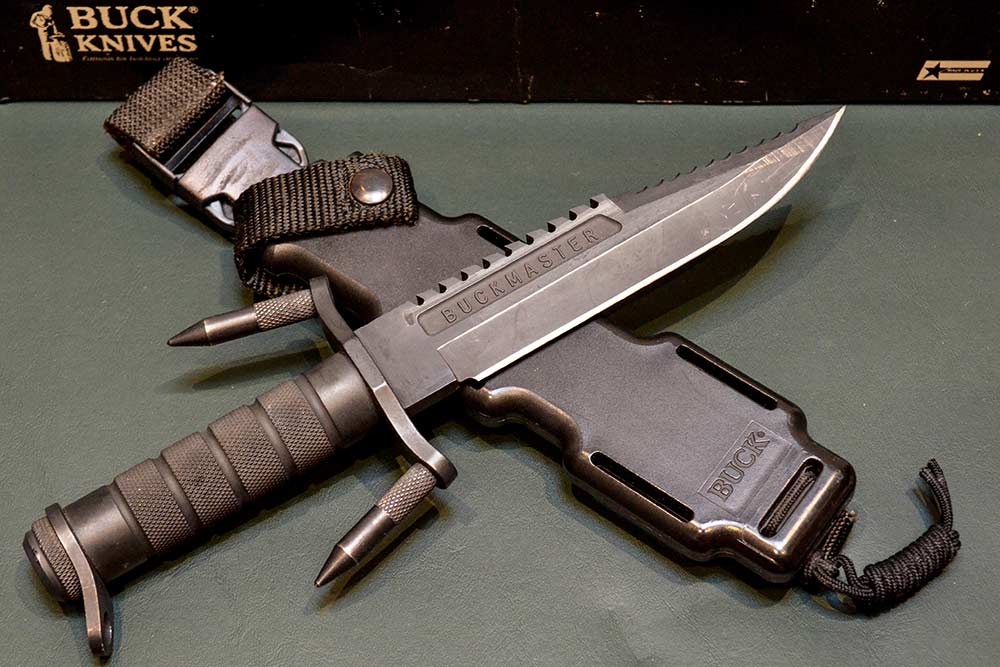 Over the years, there were various versions of the BuckMaster released, such as this black oxide edition. Dane Manzie photo.

He landed on a modified Bowie blade profile, with the spine dotted with saw teeth that could be used to cut wood as well as thin metal. The “First Blood” knife had screwdriver heads on the guard, one slotted and one Phillips. The guard also had two holes, to be used to lash the knife to a staff to use as a spear. The butt cap had a small compass inside for emergency navigation. The hollow handle originally housed a small folding knife, though this was changed to feature things such as waterproof matches and a needle and thread. Lile made 100 serial-numbered knives with this design, six of which were used during the filming of the movie. 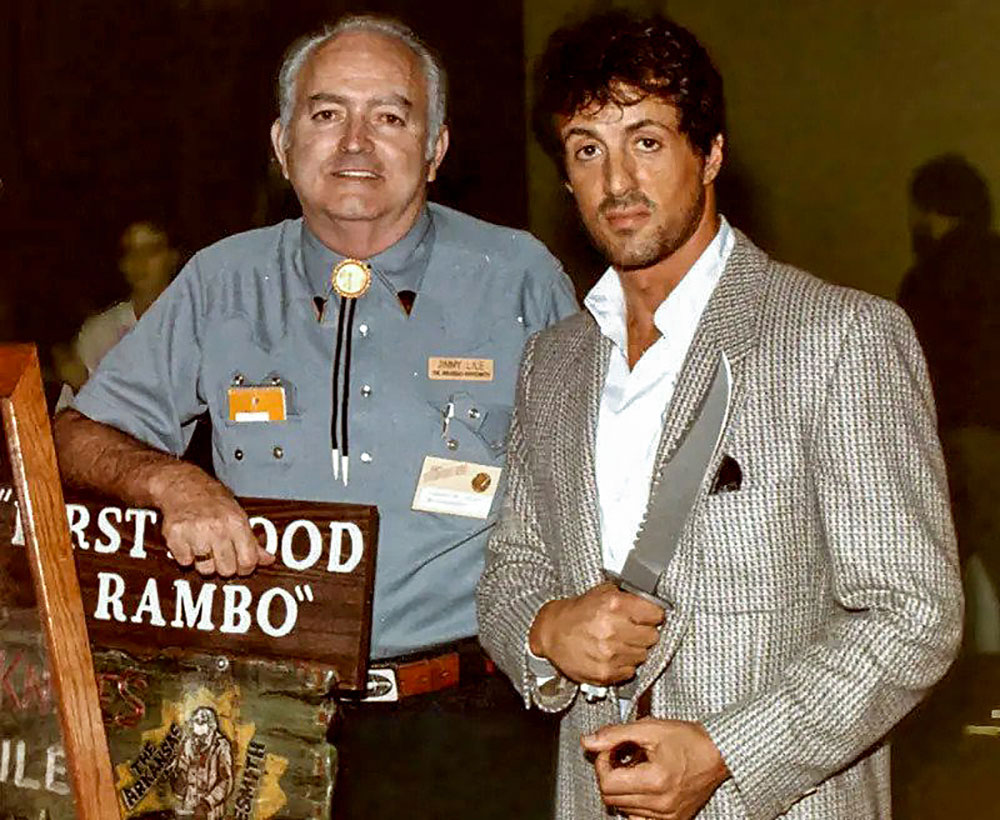 Jimmy Lile and Sylvester Stallone, two people who were instrumental in driving the popularity of these survival knives. JimmyLile.com photo.

The movie and the knife both proved popular enough to warrant sequels a few years later. The second edition Lile knife, often referred to as the Mission knife, was a bit larger, 15.625 inches in total length compared to 14 inches for the original. The Mission knife also had a darker finish on the blade, so that the polished edge would be more eye-catching on screen. As with the original, Lile produced an original run of 100 serial-numbered knives of this design. Here you can see the small folding knife that was originally intended to be stored in the hollow handle of the “First Blood” knife. JimmyLile.com photo. 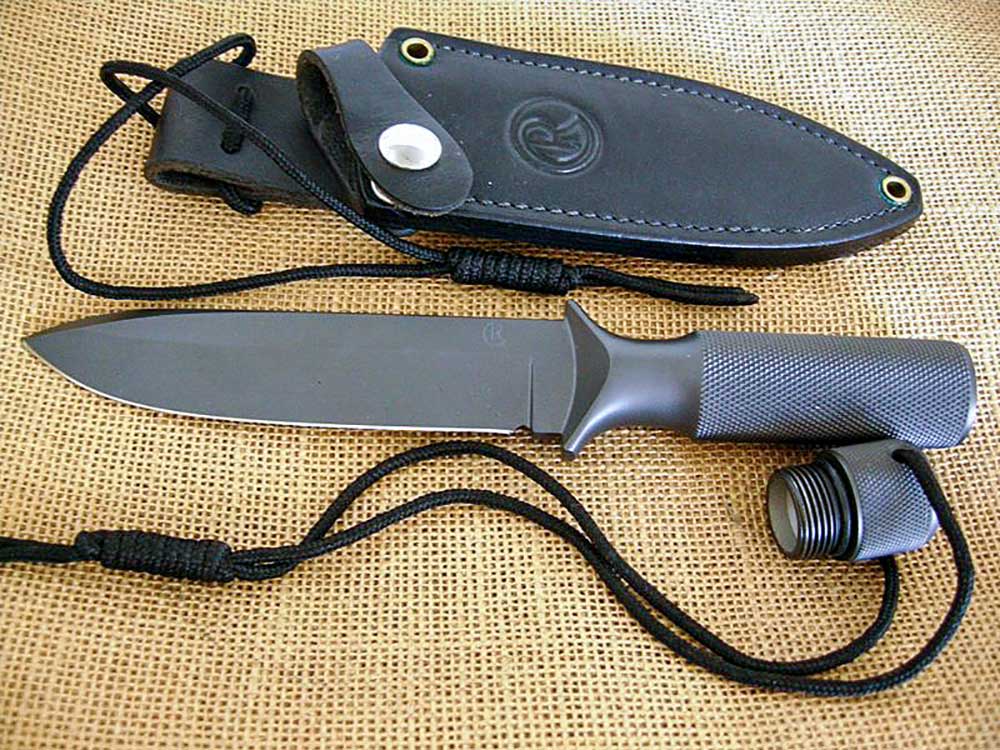 Chris Reeve developed a line of hollow handle knives that were machined out of a single billet of steel. Lee’s Cutlery photo.

Lile’s shop continued to produce these designs for several years, selling them at various shows. After Jimmy Lile passed away in 1991, the torch was eventually passed to knifemaker Vaughn Neeley, who began making these knives for Lile Knives, LLC.

With over 40 years of experience in knifemaking, including his own line called Timberline Knives, Neeley is producing Lile knives that are in very high demand, and for good reason. This ad ran in countless magazines in the 1980s, and readers bought thousands of these knives as a result. Gary Warnett photo.

As the popularity of the Rambo knife swept the country, it was inevitable that other makers and companies would try to capitalize on it with their own versions.

United Cutlery was granted the rights to mass produce copies of the knives from First Blood and First Blood II. However, the quality was nowhere near what you’d find on a Jimmy Lile original. Granted, you weren’t paying the high-end price, either.

Buck entered the hollow-handle market in the 1980s with its Model 184 BuckMaster. CJ Buck designed it for use by the Navy SEALs. As it was intended for use in or near the water, it was made from stainless-steel from end to end, with a non-reflective finish.

The spine featured two different types of saw teeth, one for wood and one for cordage. The sheath featured a built-in sharpening stone and had optional pouches you could attach to it.

Perhaps the most striking feature was the presence of two spikes that screwed into the guard. These were used to secure the knife in place while a line was attached to it, such as for rappelling. 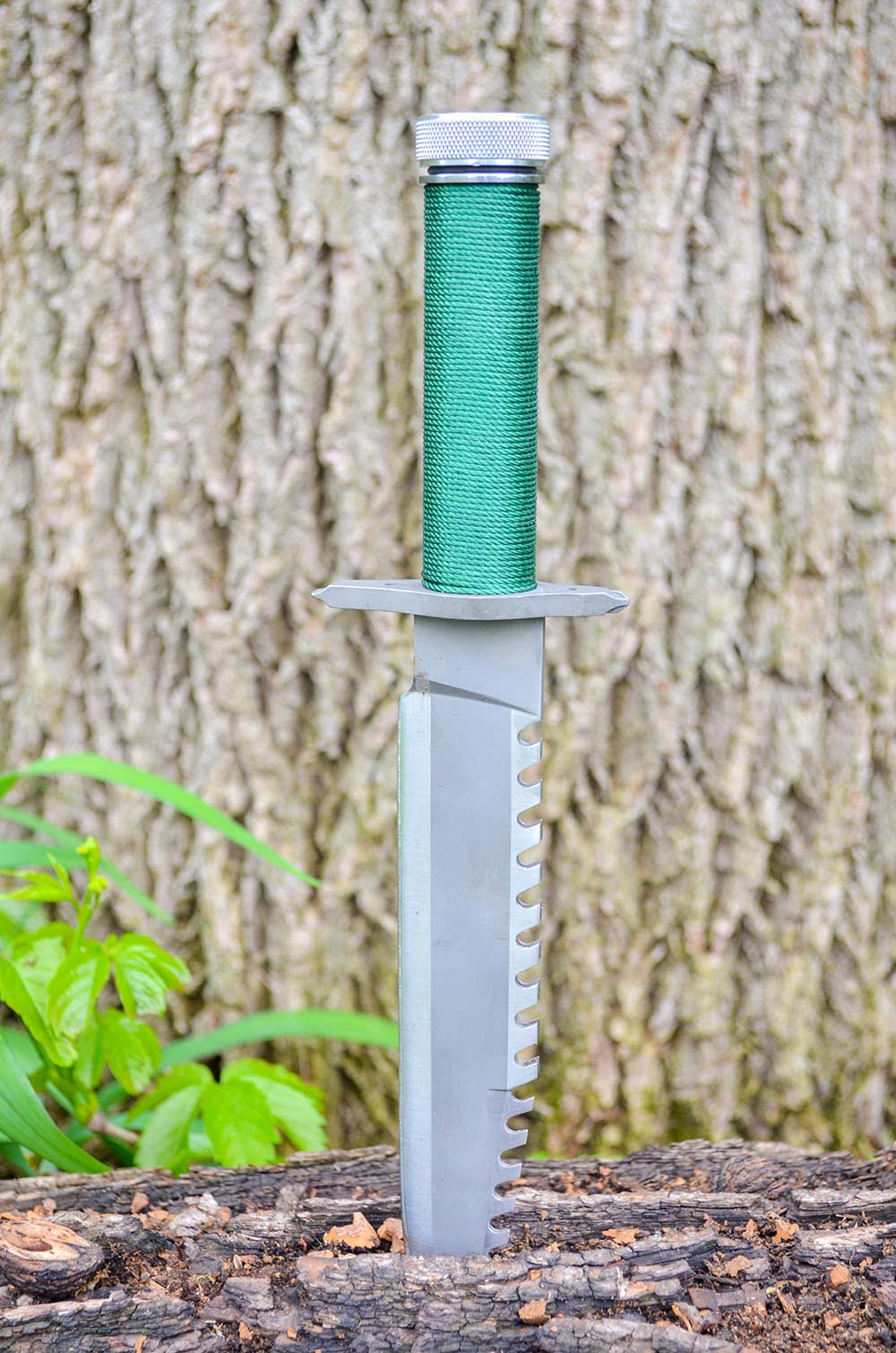 “First Blood,” the first of the Rambo series of movies, spurred consumer interest in hollow-handle survival knives such as this “First Blood” licensed replica. Author photo.

Buck did a few different iterations of this model over the years, with tweaks here and there. The company ceased production of it entirely in 1997, and the knife has become a collector’s item, often fetching fairly high prices on the secondary market. By all accounts, the BuckMaster is a solidly built knife and something that was always intended for real-world use and abuse.

In the mid-1980s, Chris Reeve developed a survival knife that was made from a solid billet of steel with a removable end cap. It eventually spawned a line of knives of different sizes and blade profiles, but all were one-piece and all featured hollow handles with end caps. This line of knives is no longer in production and when you can find one for sale, it commands a hefty price. 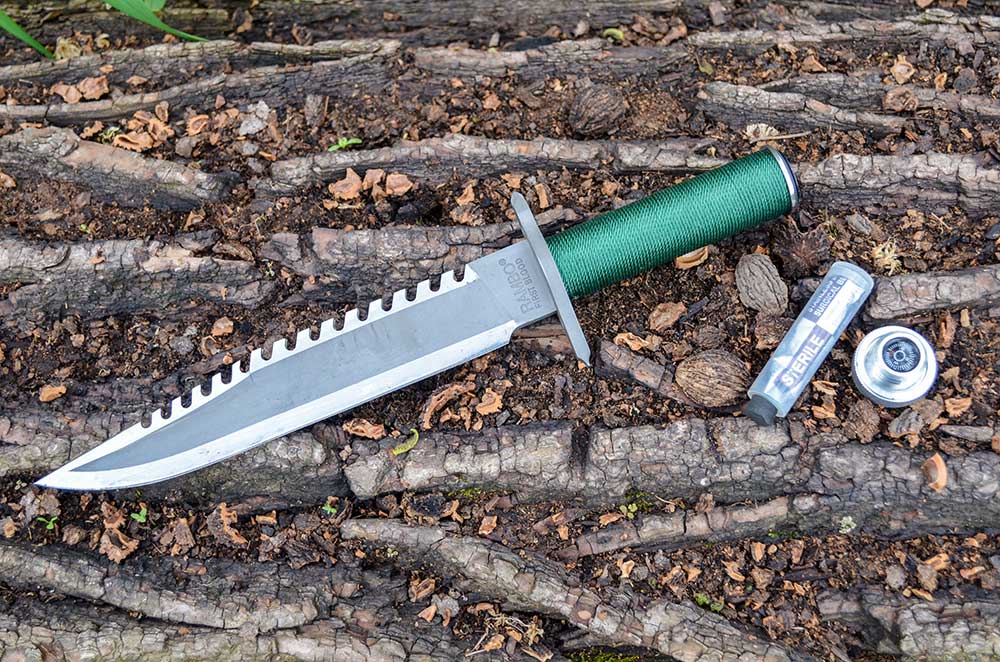 This licensed replica of the “First Blood” knife came complete with a small survival kit secured in the handle. Author photo.

Knifeco came out with The Survivor that had a sheath that could be used as a slingshot. It came complete with rubber tubing, which it was said could be used as a tourniquet in a pinch. The sheath had a small knob at the end, and the blade had a matching hole. Combined, they became a wire cutter. The hollow handle came filled with an assortment of supplies, including matches, fishing gear, and a tiny whistle.

Knifeco had another model it called The Ultimate Survival Knife. It had a bottle opener or cap lifter cut into the spine of the knife, and the handle terminated in a threaded cap that featured a somewhat bulbous compass. This model was available with either a black handle or a black blade and camouflage handle.

“…there were the countless ever-cheaper knockoffs that…were slapped together from shoddy materials and sometimes fell apart if you looked at them too hard.” 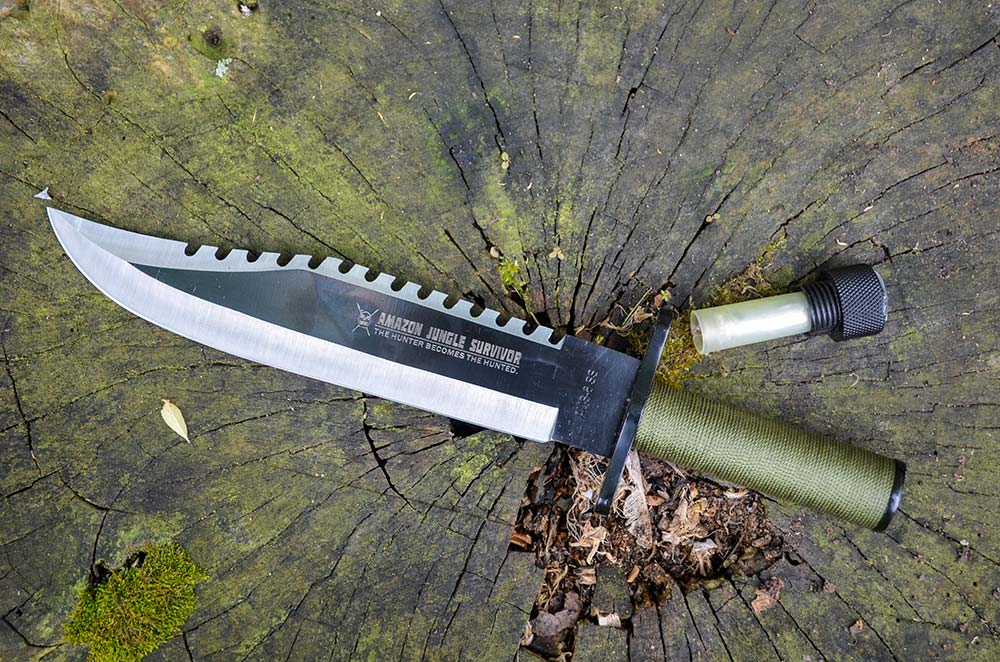 Just one example of the inexpensive knockoff hollow-handle survival knives that flooded the market. Author photo.

And then there were the countless ever-cheaper knockoffs that you could find at any flea market across the country. Usually bearing nothing more than a “Made in China” stamp on the blade, they were slapped together from shoddy materials and sometimes fell apart if you looked at them too hard.

The blade was affixed to the handle by means of a threaded bolt and, often, this bolt would snap under moderate pressure. But that didn’t stop throngs of wannabe survivalists from scooping them up for use on their secret missions in the forests and fields.

Most of these lower-tier knives came with small survival kits already stowed away in the handle. The contents varied a bit but usually included a few matches, some fishing line, a couple of fishhooks, and sometimes a folded-up wire saw. This saw was laughable, as it usually snapped apart the first time you tried to unfold it.

While they aren’t nearly as popular today, for a brief period hollow-handle survival knives were all the rage. Most of us probably had at least one and some of us likely had several. They were fun, they were neat, but unless you could afford the real deal, let’s face it: They weren’t all that awesome. 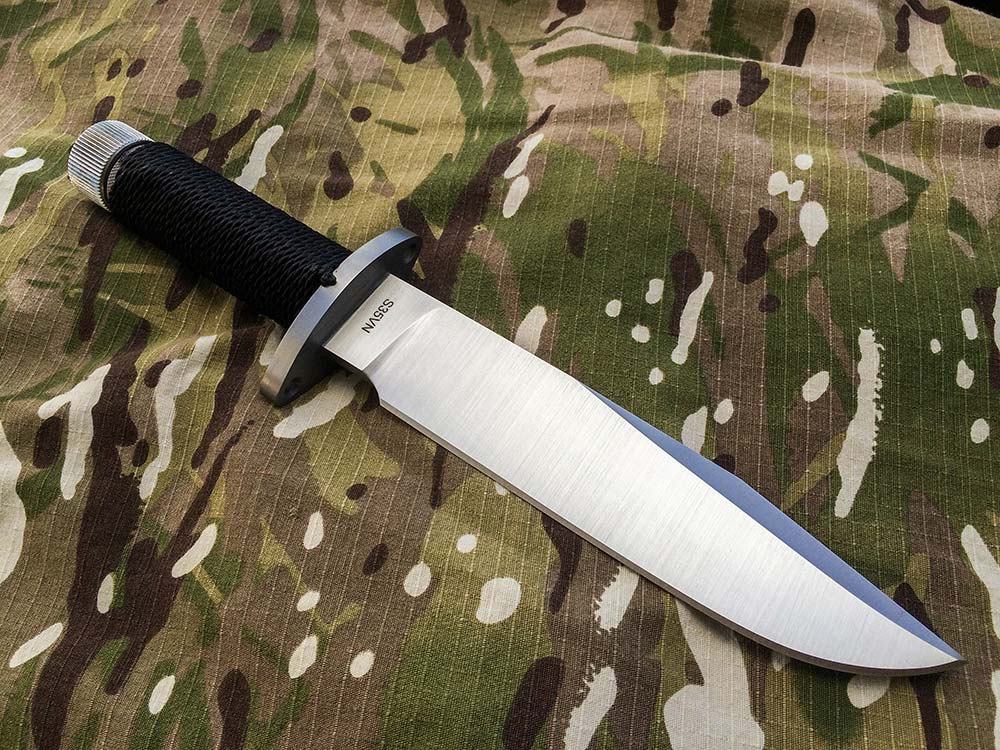 This survival knife from Newt Martin is more of an original design. Ed Martin photo.

Still, an awful lot of us had the time of our lives taking these knives out into the woods and, well, that alone is worth the price we paid for them.

Newt Martin from Martin Knives was an amazingly talented knifemaker. He produced several hollow-handle survival knives during his all-too-brief career. One of the keys to his success was adding aircraft-grade epoxy to the joint where the blade is attached to the handle, creating a rock-solid knife that can withstand virtually anything thrown its way. 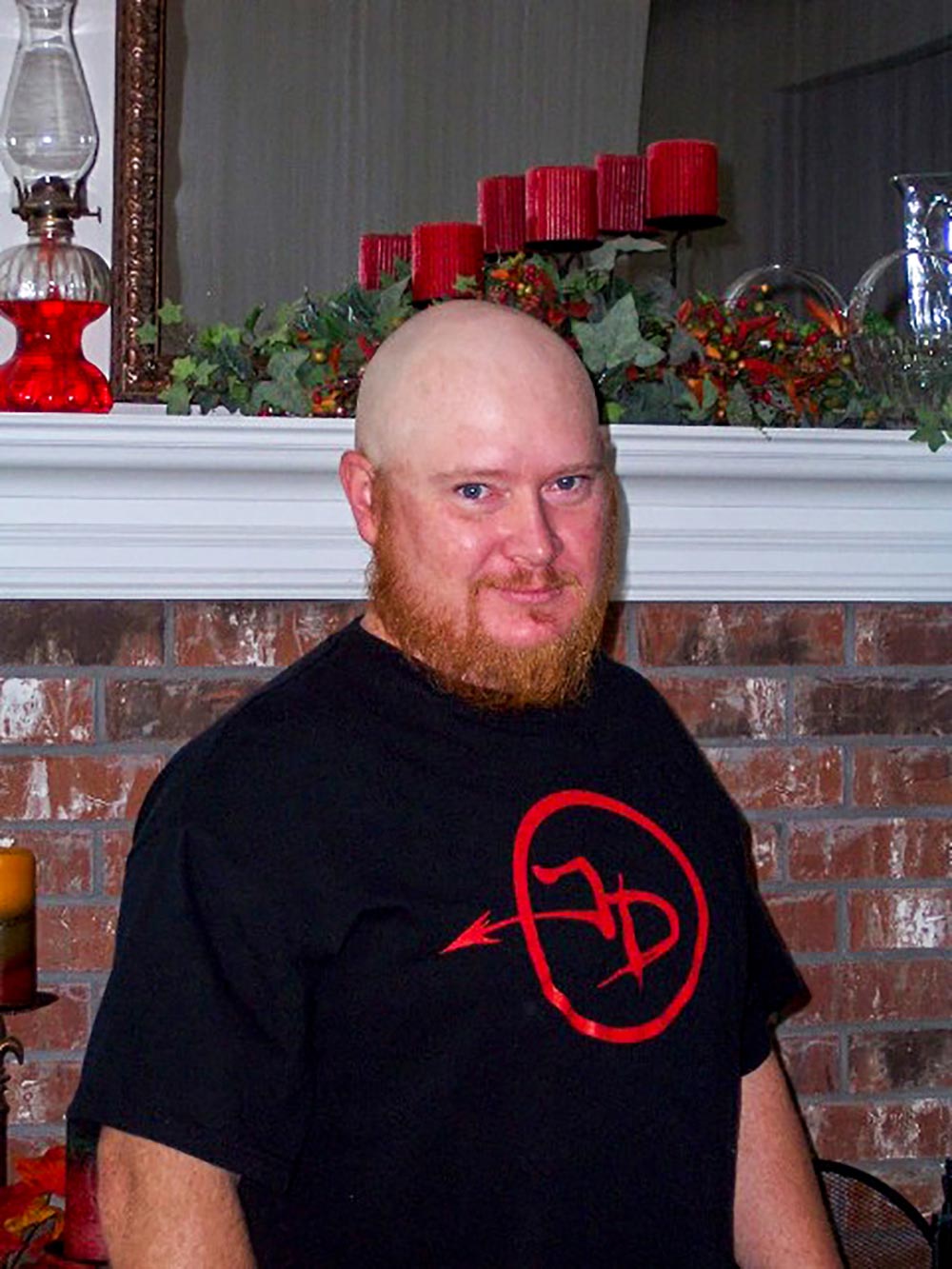 Most of these knives were essentially variations of the same theme, with a cordage-wrapped handle and sawtooth-backed blade. But there were a few exceptions here and there, such as leaving the spine smooth.

Sadly, Newt passed away in February 2018 after a lengthy battle with leukemia.