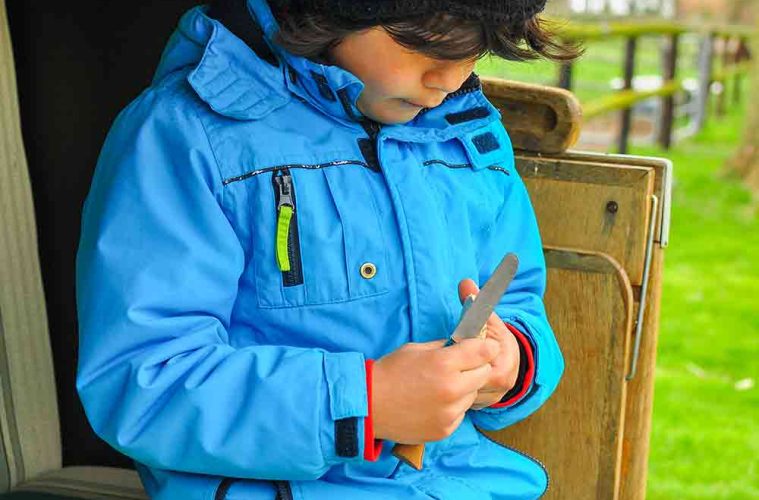 HOW TO CHOOSE THE PERFECT FIRST KNIFE

Our first grandchild, a precious baby girl named Ollie, was born a few days ago. Being the avid knife collector and user that I am, I’ve had her first couple of knives picked out for months already.

Every knife person I know has looked forward to gifting the youngsters in their life with their first knives. While I’m sure that the same could be said of those who are passionate about virtually any hobby, the name of the magazine is Knives Illustrated, not Action Figures Monthly or Baseball Card Digest. So, let’s talk first knives. 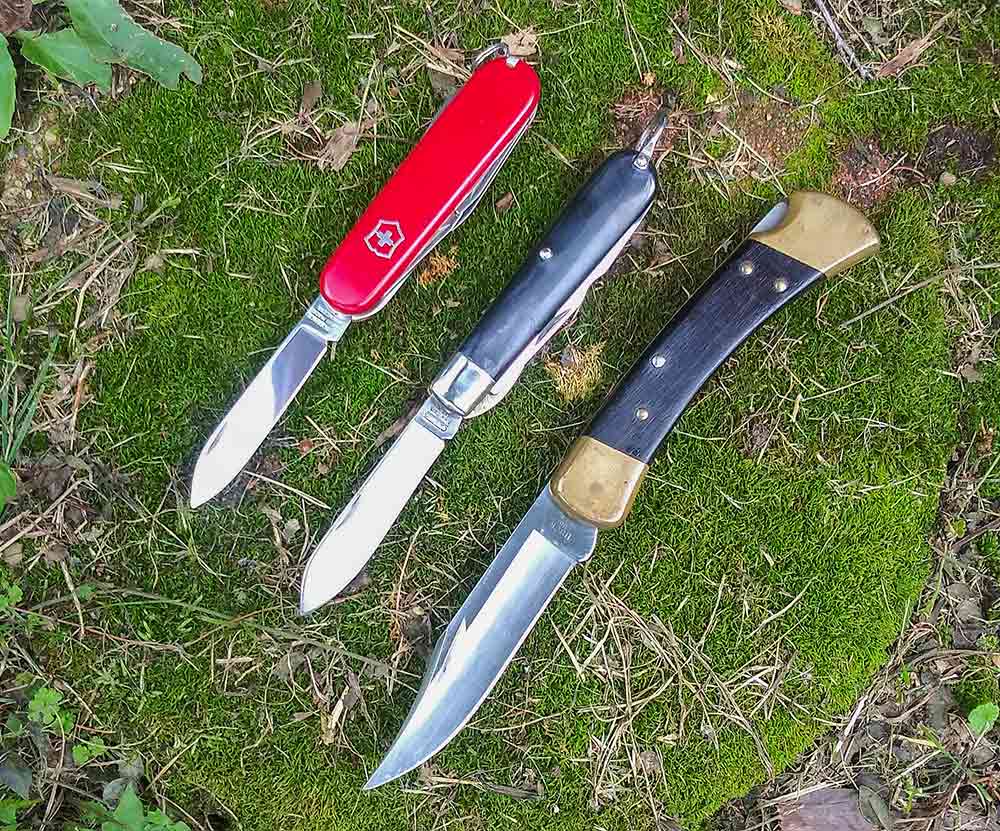 A common question bandied about in various online forums and social media sites is some variation of, “How old should a child be before they get their first knife?” The thing is, there really isn’t a hard and fast rule for this. It isn’t like being able to get a license to drive or being allowed to buy a beer at the local pub.

There’s a saying people like to toss around when they’re aging but don’t want feel old: “Age is just a number.” That applies here as well. Just because a child turns a certain age doesn’t automatically mean they’re ready for their very own blade.

“The gift of a knife to a son, daughter, nephew, niece, or other loved one is a special occasion, and carries with it some responsibility.”

Sure, a very valid argument can be made in favor of a sheath knife, such as the lack of moving parts and the general durability. However, in this day and age, most young people would be better off carrying a folding knife, something that can ride deep in the pocket and that won’t cause alarm if it is seen by an adult. Thus, folders will be the focus of our discussion. 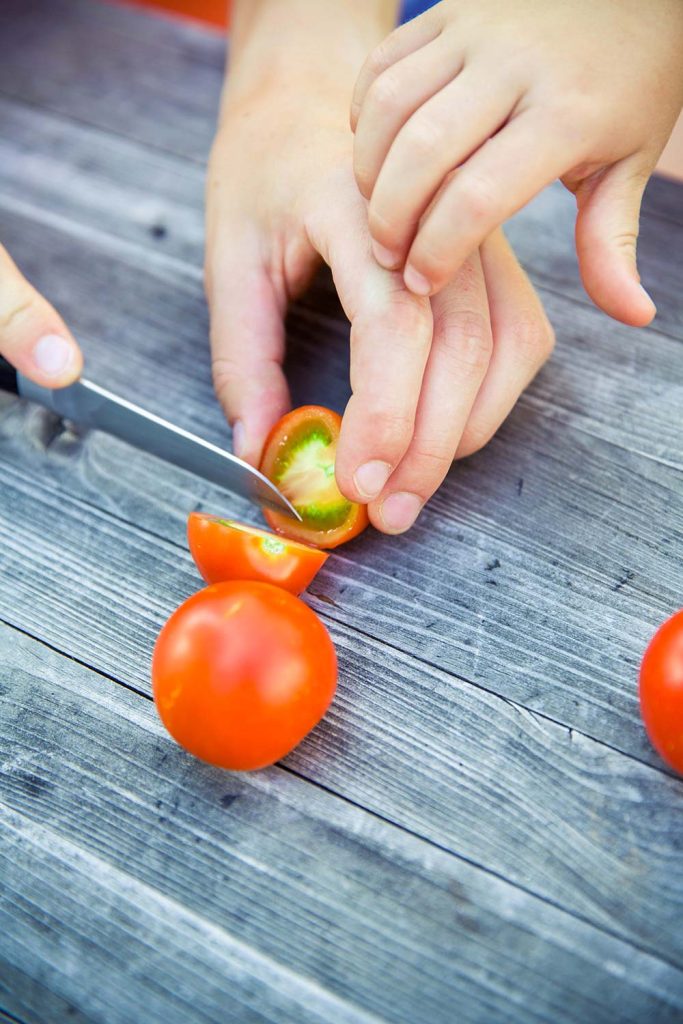 Food prep is a great way to teach a child some basic knife skills. Unsplash photo.

Remember, too, that times have changed. When I was growing up in the 1970s and 1980s, most guys I knew carried a pocketknife, often either a Buck 110 or a Swiss Army Knife of some sort. Today, even that lowly SAK could mean a suspension or possible expulsion from school, as it would be considered to be a weapon.

There are a couple of things to consider when you’re deciding whether they’re ready for their first knife.

This is very subjective, but it is a key element in the decision. It isn’t ruled by age, gender, or education. Maturity is, at the core, a level of development that governs how a person responds to a situation. I mean, I’ve met exceptionally mature 5-year-olds whom I could trust with any tool they’re able to hold, and I’ve known guys in their forties who probably shouldn’t be allowed to use a spoon unsupervised and without a helmet.

What it boils down to is whether the child is able to follow basic instructions as well as develop at least the beginnings of good safety habits. Here are a few questions to consider: 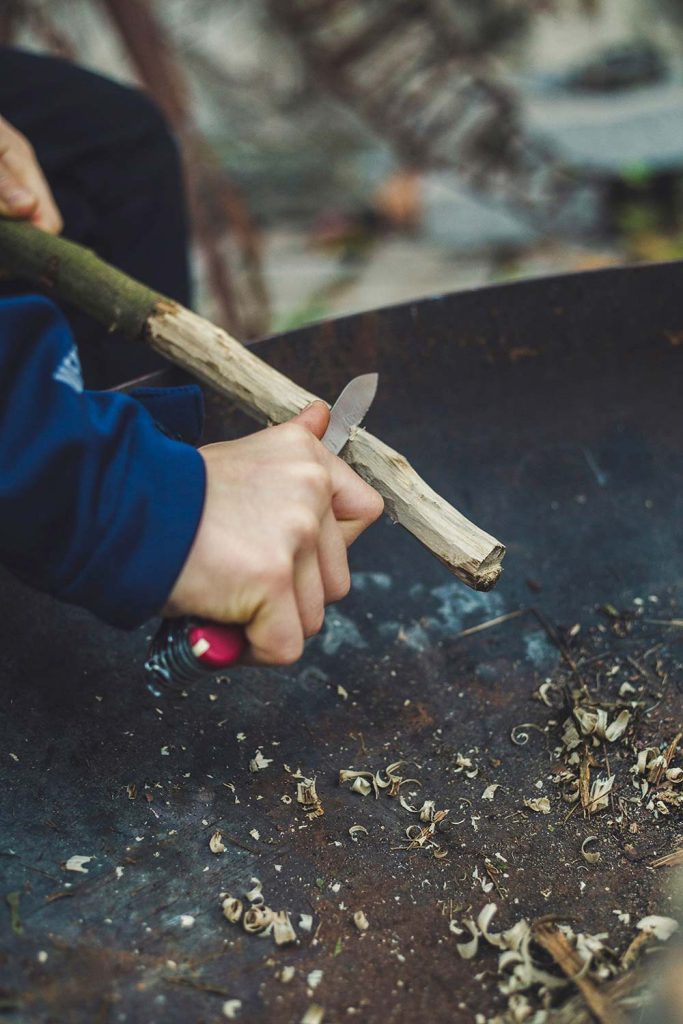 Try to match the knife to the size of the child’s hand, for comfort as well as safety. Unsplash photo.

This doesn’t mean that they’ll never make bad decisions. Many of us can probably recall carving or cutting something we shouldn’t have when we were younger. This may have also included a few rounds of what was simply referred to as “the knife game,” where you’d splay your fingers out on a table and use your knife to stab back and forth at the spaces between your fingers, trying to go as fast as you can.

However, as a general guideline, the more mature the youth is, the more responsible they’ll be with their new knife.

“What it boils down to is whether the child is able to follow basic instructions as well as develop at least the beginnings of good safety habits.”

Just as you need to consider their maturity and intellect, you need to take into account the physical side of the equation. Start with the size of their hands.

Are they going to be capable of holding and safely using the knife you intend to give them? If the handle is too large, the knife will be awkward and cumbersome, creating a risk of accident or injury. It’s the same for grown-ups; if a knife isn’t comfortable to hold and use, we’ll find reasons not to carry it, which defeats the whole purpose.

The length of the blade is a factor, too. Even a well-balanced knife can feel clumsy if the blade is too long for the task at hand. This is even more apparent when you’re new to using knives and haven’t developed your skills yet. The last thing you want to do is to handicap the child by saddling them with a knife that’s ill-suited for them.

Unlike many lesser imitators, the wood saw on the Hiker works incredibly well.

Endless options on the market are perfectly suitable for a young person’s first knife. Personally, I tend to favor slip joint models for this momentous occasion (with one lock-back exception that we’ll get to shortly). It is a classic design that isn’t complicated by bells and whistles. While many of us are fond of autos or assisted-open knives, they’re truly unnecessary for a first-time user.

Plus, those sorts of features add to the price tag, which brings us to another consideration—cost. It can be something of a fine line, in that you want to give them a good quality knife, but there’s a fair-to-middling chance that the knife is going to get damaged or lost at some point.

After all, just as with grown-up people, even the most responsible kids can have a bad day. While price is somewhat subjective in that what one person feels is fairly inexpensive another might think of as costly, as a general rule I think keeping it under 50 bucks is reasonable. 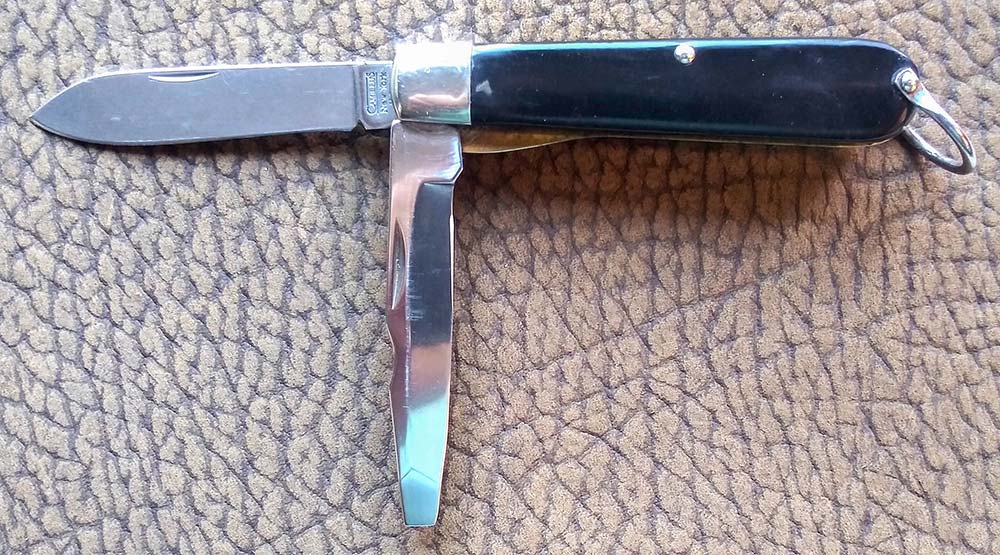 The TL-29 has a knife blade and a scraper/screwdriver tool. Simple, but very handy.

I often suggest a handful of knives to parents who want to gift one to their sons or daughters. These aren’t the only options out there, of course, and there are probably another dozen or so that are popular choices.

You can choose from dozens of Victorinox knives, but I favor the Hiker in most cases. It has 13 tools on board, including a wood saw that actually works fairly well. This is an excellent choice for a child who will be spending a good amount of time outdoors.

The size is perfect for smaller hands, and the tools are easy to open and close. It is available in classic red just about everywhere, but if you wanted to splurge on a more colorful pattern, you can find exclusive models at DLT Trading. 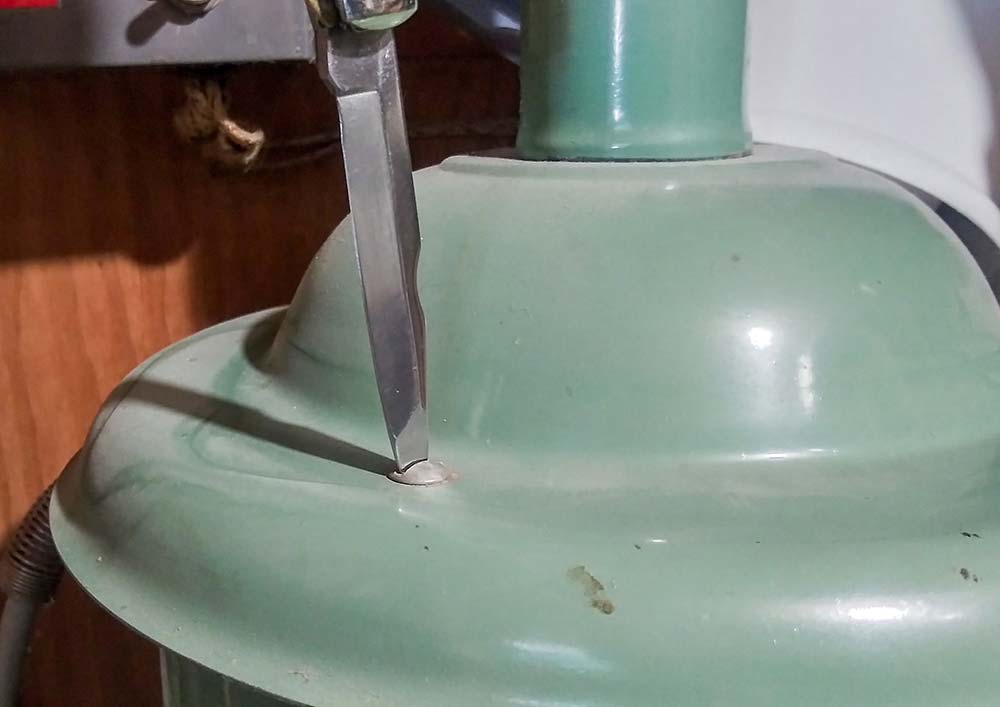 The screwdriver on the TL-29 works great on slotted screws.

Sometimes referred to as an electrician’s knife, the TL-29 is slightly lesser known than the Swiss Army Knife lineup, but it is no less useful. It has just two tools: a single-edge spearpoint blade and a stripper/screwdriver that can also function as a pretty decent, small pry bar. It is an average-sized pocketknife, so it won’t be cumbersome for younger users.

The downside is that it isn’t currently being manufactured, so you’ll have to turn to the used market, such as eBay, to find one. However, they aren’t rare at all and a quick search found a few that were listed for under 10 bucks.

This is the lock-back exception I mentioned earlier. The Buck 110 is a truly classic knife, and it was the first real knife for an untold number of people over the last several generations. However, it is on the larger side, and that needs to be taken into account. It isn’t the best option for smaller hands. But, even if it isn’t their first knife, the Buck 110 deserves a spot in every knife user’s collection. 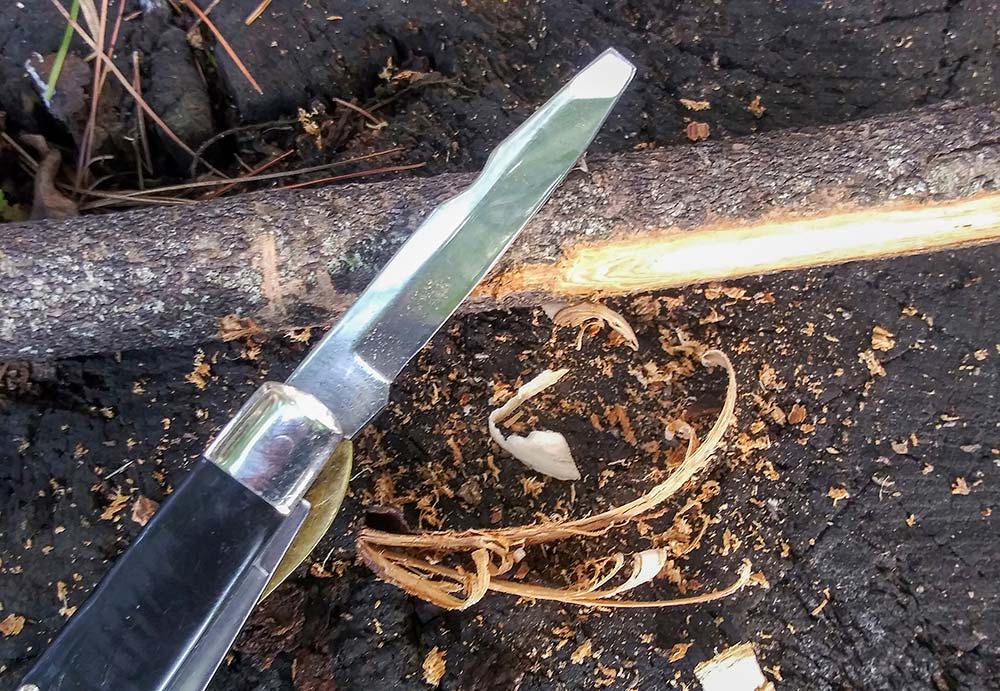 The screwdriver/scraper on the TL-29 has an edge that’s sharp enough to scrape bark for tinder, saving the edge of your knife.

The gift of a knife to a son, daughter, nephew, niece, or other loved one is a special occasion and carries with it some responsibility. Take the time to consider the options available and make sure that you’re not only giving them a knife at the right time of their life, but also that you choose a knife that’s well-suited to them.

One final suggestion: Be sure to speak with the parents before giving the child a knife. While you might feel that young boy or girl is certainly ready for the responsibility of knife ownership and use, Mom and Dad make the final call. Yes, they even have veto power over a grandparent. 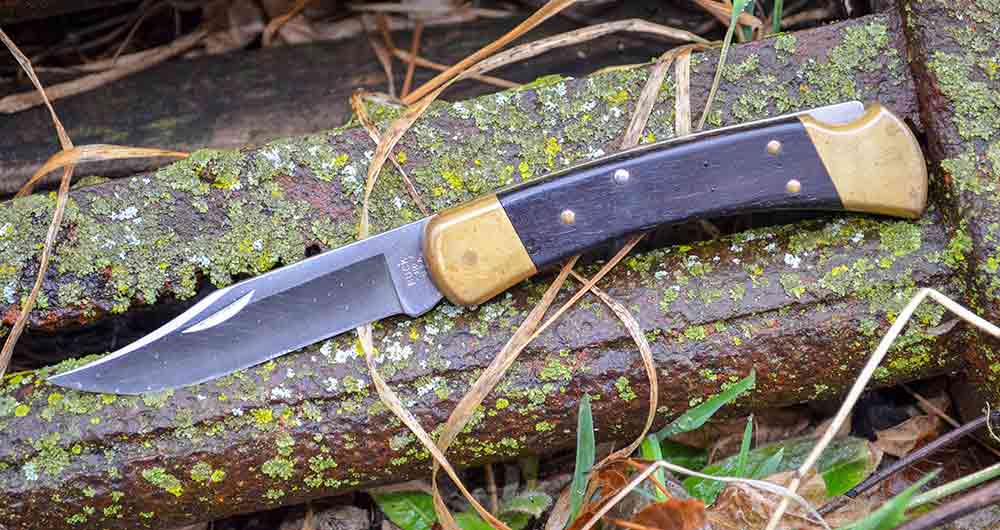 The Buck 110 is an iconic knife and perfect for first time users. 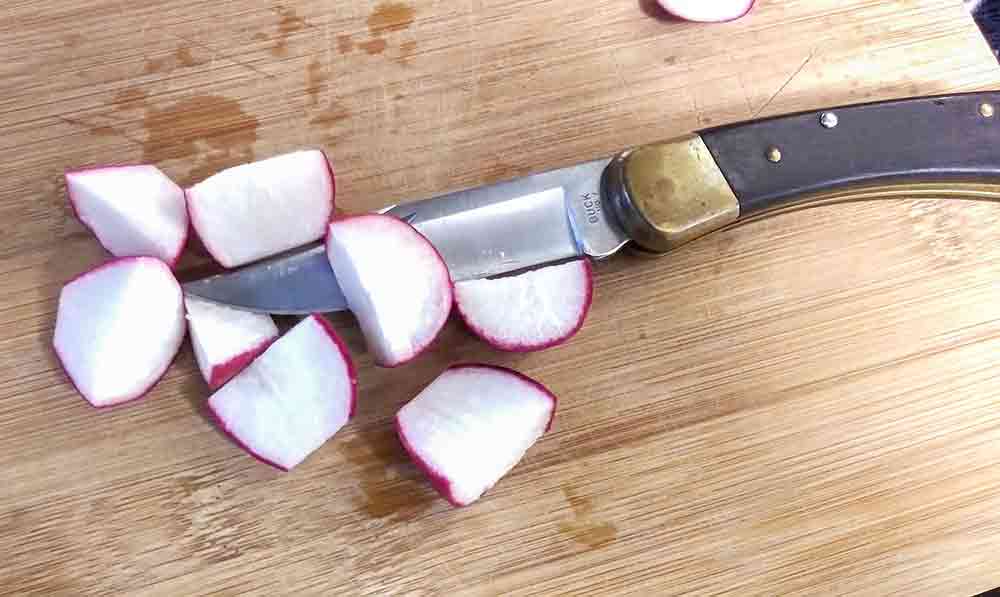 The blade of the Buck 110 is thin enough to make it a great slicer for food prep. 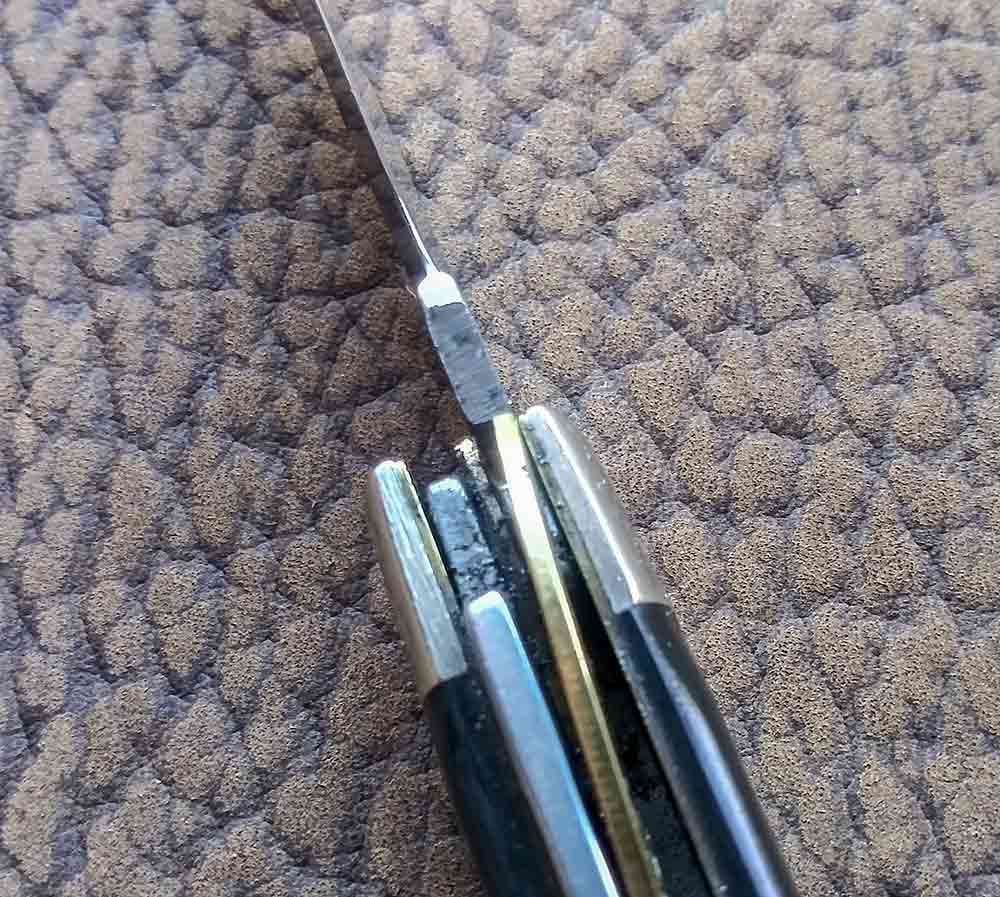 There is a small lock on the screwdriver on the TL-29, though not one for the knife blade. This makes sense, given that with the screwdriver the pressure exerted could force the tool closed.

Handing a child a gift-wrapped box containing the blade you’ve chosen for them is the easy part. Teach them how to sharpen the edge and how to oil it to prevent corrosion, as well as how to clean it as needed.

Safety is also an important topic to cover. Explain the Triangle of Death, which is the area defined by knee to crotch to opposite knee, and how it contains major blood vessels that, if cut, can be deadly.

That being the case, knives shouldn’t be used near them. Other basic safety protocols to be discussed include: