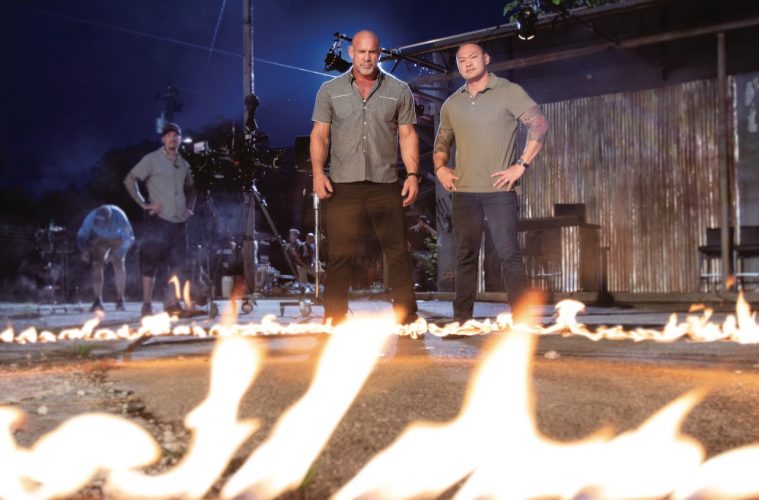 It’s Knife or Death! An Interview with the Hosts of History Channel’s New Cutting-Edge Competition

It’s obvious that I am loving the knife-related air time happening over at History Channel. So, last year when “Forged in Fire: Knife or Death” was announced, I was almost beside myself with anticipation. A knife show, where the contestants are actually getting out onto a course and showing the world what knife sports are all about? That sounded like my kind of show!

I recently had a chance to speak with Bill and Tu about their time on “Forged in Fire: Knife or Death” and their thoughts on what it takes to be successful on the show that History Channel describes as, “The country’s most experienced bladesmiths, martial artists and knife experts slice, stab and chop their way through a blade-shattering gauntlet for a chance at winning a $20,000 grand prize.” 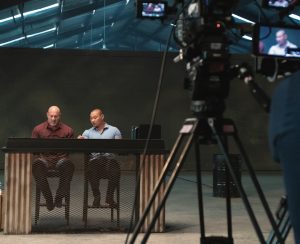 Bill Goldberg and Tu Lam preparing for a contestant.

Knives Illustrated: How did you get involved in “Knife or Death”?

Bill Goldberg: My involvement with “Knife or Death” was no different than pretty much 90% of the casting inquiries that I have had about hosting, except that it was from a gentleman that I had seen his work before and was excited to work with him. This was just a different project. Because of the content and his background, I said yes.

KI: Do you have a personal favorite knife style?

BG: I do have a personal favorite knife style, but it’s not necessarily the most strategic to take on, shall we say, “Knife or Death.” My knife style is basically an extension of my personality; which is, I try to smash every single thing in front of me, and the blade that I carry is reminiscent of that. It’s a destructive blade and my technique is not about finesse. Now, when it would call for finesse, I might consider a different blade. But I’m a powerful guy that wields a powerful blade.

KI: What was the best run you saw last season?

BG: I’d have to go Jason Johnson, in my eyes, because it was the perfect blend of speed, anger and violence.

KI: What do you feel is the hardest obstacle in the course?

BG: I can’t answer the hardest obstacle in the course because it depends on the blade that you are wielding. But for the most part, what’s held the most competitors up this season has been the ratchet straps. 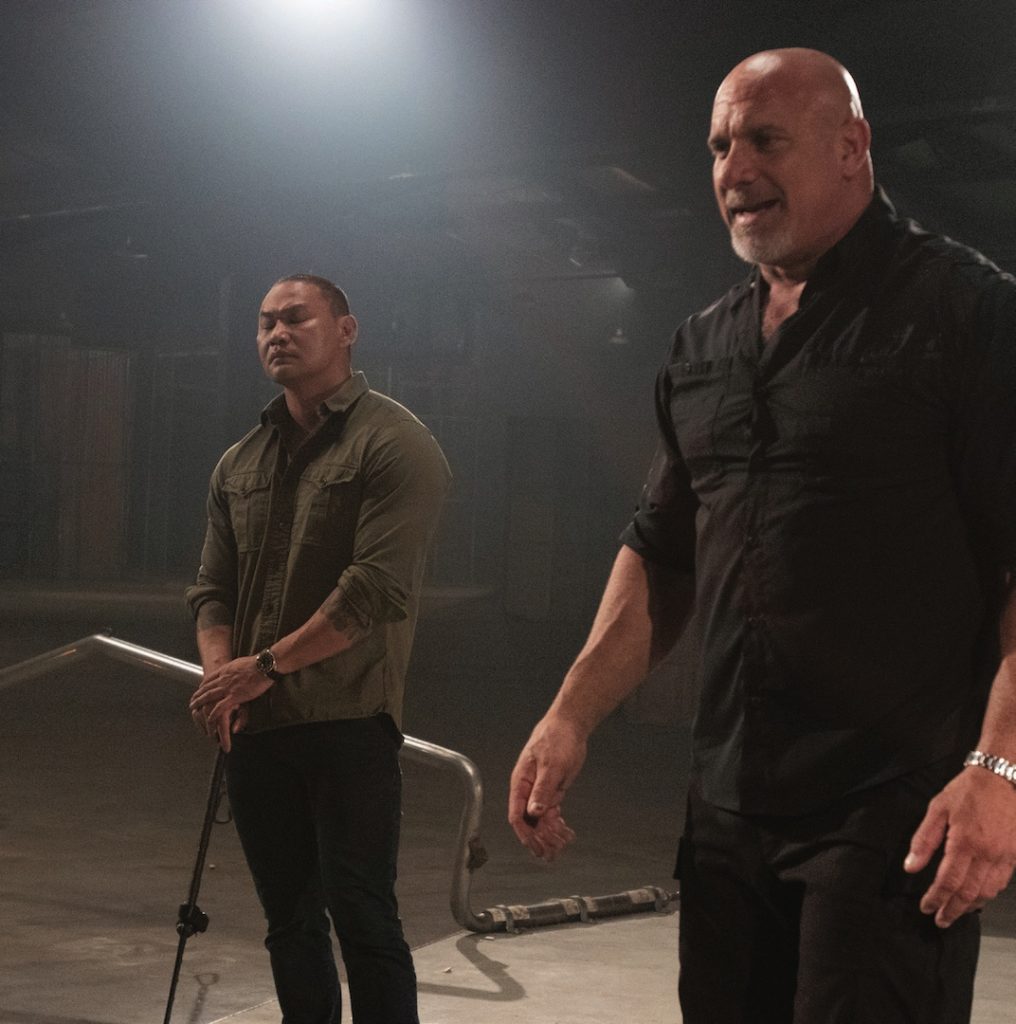 Bill Goldberg and Tu Lam on set, finding a moment of Zen.

KI: What are you watching for specifically when judging “Knife or Death”?

BG: I’m not really judging “Knife or Death;” I’m just commenting on it, and what I am looking for in the ultimate competitor is the perfect blend of the perfect knife, the right amount of cardiovascular fitness, the right amount of speed and power and most importantly, strategy. Because depending on your statistics in all of the things I just mentioned, you have to go about things in a certain methodical way, taking every variable into consideration.

KI: What is your favorite memory of working on “Knife or Death”?

BG: My favorite memory is meeting the wonderful people and getting to know them, whether it be the production crew or the guy sitting right next to me (Tu Lam) — which is an honor and privilege to know more about him, each and every episode, and to get closer to him — and Travis (Wuertz) and our entire production team—an unbelievable family of people, and that is a rarity in Hollywood — I’m greatly appreciative of that more than anything. But it does give you an opportunity to meet different people, from different walks of life, that all have one thing in common—and that’s the blade.

KI: What is your personal favorite style of knife?

Tu Lam: For an everyday carrier, I like the Ronin Tactics Sakura blade. The geometry works well with a forward mass to allow the blade to spin faster with a tapered handle and ring. The blade sloping lead edge is ideal for slashing and the false edge allows for a dagger point penetration. This blade is ideal for close-quarters protection.

KI: How did you come to get involved with “Knife or Death”?

TL: After I retired from the Special Forces, I started a company called Ronin Tactics, Inc., which specializes in developing tactical gear, re-engineered from my time and experience serving throughout specialized units within Special Operations. We also travel around the U.S., teaching law-abiding citizens, military and law enforcement combat-proven tactics needed to survive in a high-threat situation. One of the courses our company teaches involves a combat form of blade tactics.

In November of 2017, the History Channel’s talent scout reached out to me regarding the “Knife or Death” TV show. The network asked me to look at a few videos, along with several celebrities and MMA fighters, as host of the show to see how we interacted. I remember getting along with Bill Goldberg right away and we quickly became friends.

The first season aired May 2018 and the show did very well throughout the network. We are currently filming season two of “KOD,” and I can tell you this season is bigger and meaner than last season.

KI: Where do you see people make the most mistakes in the course?

TL: I look at more than just their blade. I study the competitors. I study their story, upbringing, motivations, etc. I find the biggest mistake most competitors make is their inability to adapt and overcome to the changing environments the “Knife or Death” course brings. This course isn’t just about the blade. It’s about studying past “KOD” season one events and preparing for it physically and mentally while building the skills needed to effectively gage speed, accuracy, distance and levels of quickly changing obstacles found on this course. There is no one blade that will excel on this course, so it is critical they know how to effectively use every part of their blade. 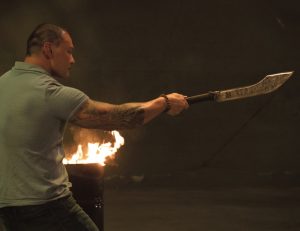 Tu Lam wielding the Ronin War Sword on the set of “Forged in Fire: Knife or Death.”

KI: Do you test each test to make sure it is difficult enough, yet not unrealistically difficult?

TL: Every obstacle on this course has been tested several times by the safety crew or Bill and me. I usually test the more challenging obstacles that require more speed and precession. This season we started filming a segment of the show called, “TU torial” where I “TU Lam” demonstrate — play for play — my approach to defeating the more difficult obstacles. In this segment, I go over the mindset, body mechanics and strategy needed to generate explosive force through short burst movements. We discuss speed and angles of entry to the object, based off the structure, construction and presentation of the object. I also discuss the geometry of blade needed to successfully complete these harder obstacles.

KI: What is more important? Blade design and edge geometry? Or the contestants’ body mechanics and structure?

TL: I have seen weaker and smaller stature competitors bring a blade with the right geometry to make up for their lack of size or strength. A small person can generate more power on a chop if they have a heavier forward mass, with a tip down recurve. This recurve will allow more transfer of power upon impact, which is very much like the chopping power found on an axe. I also find that the competitor must know how to effectively use the geometry of their blade to their advantage.

During this coming and last season of “KOD,” I have seen near perfect body mechanics and power, while using poor blade geometry and the results were usually unfavorable — resulting in either failure to defeat the obstacle or catastrophic damage to the blade.

KI: What are you watching for specifically when judging “Knife or Death”?

TL: I usually get a short biography on each competitor and their blades prior to their run. My approach to understanding, or predicting how they would do, starts with understanding their history. I look at things that motivate them to compete in this competition. Some are here to prove something to themselves and their families; some fight to empower others; others have competed at a chance to win $20,000 so that they can take the winnings to support their child’s medical needs. There are so many reasons they compete, and as a co-host I must try to understand their mindset along with what drives them.

I also study their current fitness level, training, occupation, etc. Finally, I go into their blade geometry. Once I understand these things, I then go into their ability to wield the blade, based off of my analysis of the collected data. What I’ve noticed as these competitors run through the course is their mindset, body mechanics and ability to quickly problem solve to adapt and overcome the situation. 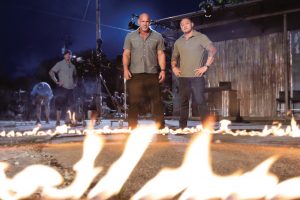 KI: What is the closest you have come to stopping a competitor other than a catastrophic blade failure?

TL: Our blade expert and two-time “Forged in Fire” champion Travis Wuertz is our safety on the ground. Before any competitor can compete in Knife Fight (indoor course) and Blade Run (outdoor course) they must pass a final blade inspection, performed by Travis. He performs this in “The Cut” as he checks the blade and then performs a cut on a tatami mat, to check the blades geometry and sharpness. There have been a few competitors who have failed making “The Cut” and there have been a few times where safety had to step in to stop the competition due to the physical safety of some competitors.

KI: What is your favorite memory of working on “Knife or Death”?

TL: I would have to say it’s the experience. The ability to go on the “KOD” set and study different types of competitors and their blades. I love seeing the creative minds of the writers and producer of the show. The crew is very professional, and I feel very lucky to get a chance to work with them. Before the start of every day, I like to talk with our blade expert, Travis Wuertz, to get his assessment of every weapon that’s competing that day.

It has also been an extreme honor to work with Bill Goldberg. The man is extremely intelligent and understands that this show is about more than just the blade. Every night Bill and I would read over each person’s biography, study and debate over our educated analysis of how we think they will perform. I also, enjoy meeting each and every competitor. After studying their bio, I feel there is a personal connection in meeting and watching each of them perform. I find myself becoming a fan of the show and of some of the KOD competitors.

Knives Illustrated would like to thank Bill Goldberg and Tu Lam for taking time out of their busy shooting schedule to speak with us. It has been a pleasure to get to know you guys and gain a further understanding of your appreciation and love for blade sports.