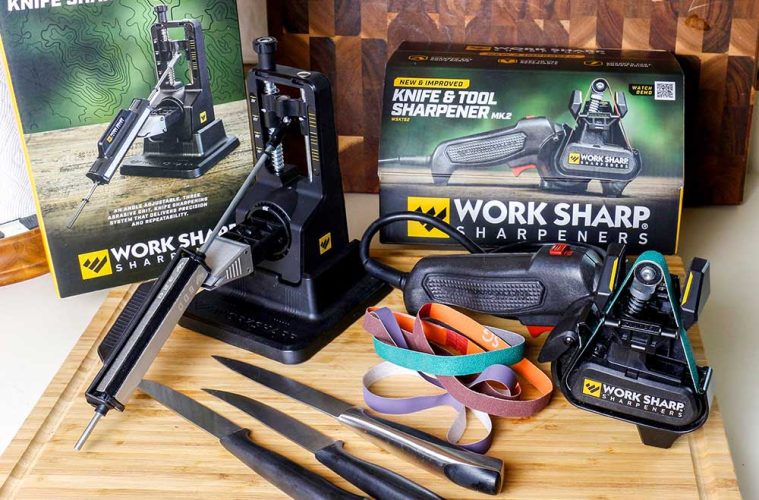 It always amazes me how many people love knives, carry knives, and use knives but are completely baffled when it comes to keeping them sharp.

As a reader of this magazine, one who tends to be a bit more serious about edged tools, this probably doesn’t apply to you. Still, if you’re like me, you’re always interested in easy, fast, and effective ways to maintain the edges on your knives. 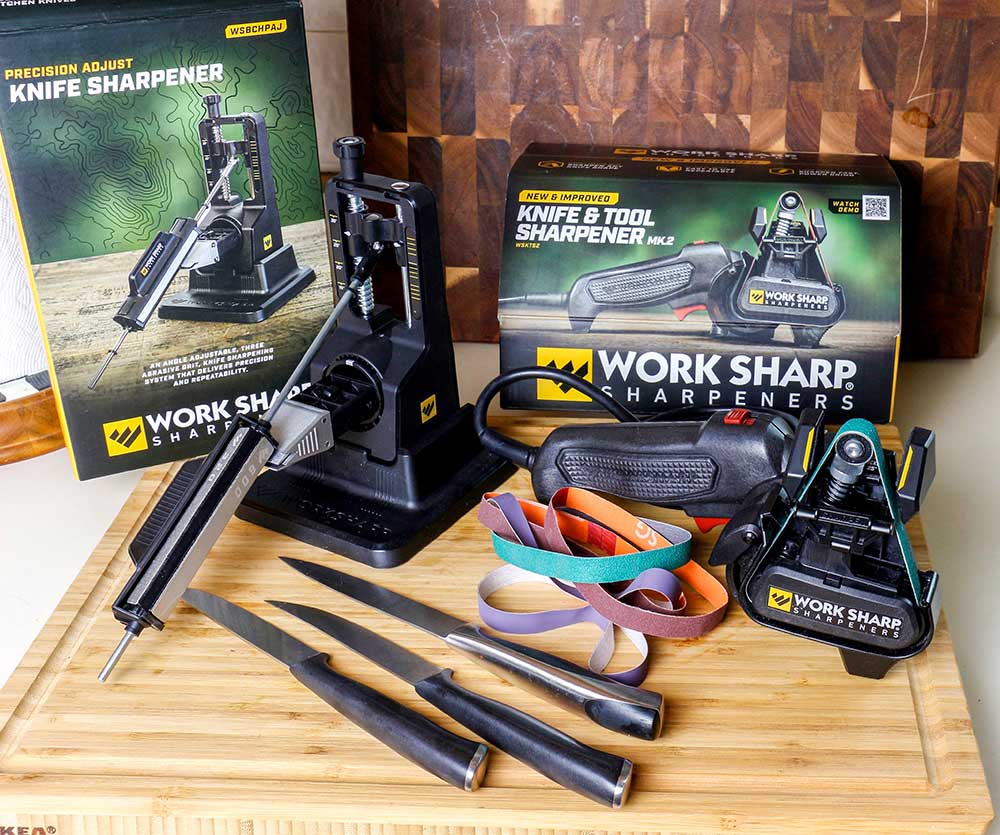 Either of these Work Sharp sharpeners would be a welcome tool for any knife enthusiast.

There are many sharpeners and sharpening systems on the market. Recently, I had a chance to work with a couple of good ones from Work Sharp Tools, namely the Precision Adjust Sharpener and the Knife & Tool Sharpener Mk.2.

Naturally, the easiest way to keep your knives and other tools in top shape is to make sure they don’t get too dull in the first place. With my EDC, camping, and hunting knives, I don’t let them go too long without a couple of touch-up strokes on the bottom of my favorite ceramic coffee mug. That’s usually all that’s required.

But if you neglect or abuse the edges, then they might require a bit of work. When I was a sergeant with the police agency where I worked for more than 27 years, word spread that I had somehow cracked the intricate and mysterious code on how to sharpen knives. It wasn’t long before I had officers lining up asking me to sharpen their knives.

Most every officer I knew carried a knife, but many of those knives were carried for an entire career without seeing a sharpener. Some of the knives I sharpened for them were in poor condition. A couple that started with plain edges were so chewed up that they looked like improvised serrated blades.

There’s no need for people to let their knives decline to such a poor condition. These Work Sharp sharpeners offer two different approaches to maintaining the cutting capabilities on various edged tools. Both methods work well.

“…the Precision Adjust Sharpener…offers a wider range of adjustment than other systems when it comes to choosing the sharpening angle.” 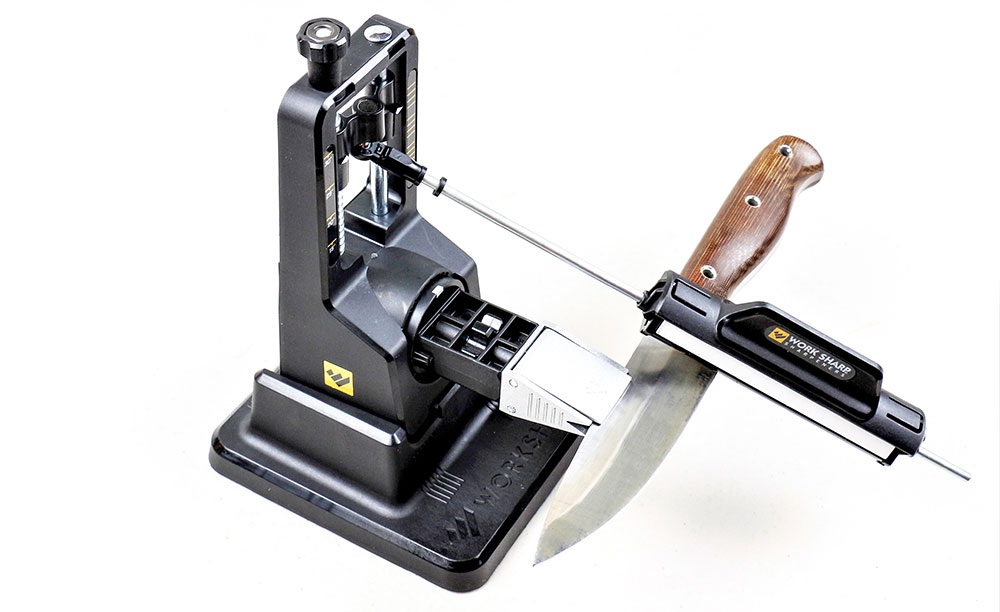 The Work Sharp Precision Adjust Sharpener has some great features and can handle all your sharpening needs. The clamp that holds the knife in place for sharpening is held to the base with a magnet. It also rotates 180 degrees so you don’t have to unclamp and then reclamp the knife to sharpen both sides of the blade.

While several sharpeners use a knife clamp and sliding rod, the Precision Adjust Sharpener has several features that set it apart. The first is that it offers a wider sharpening angle adjustment range than other systems. Specifically, you can adjust the sharpening angle from 15 to 30 degrees in 1-degree increments. 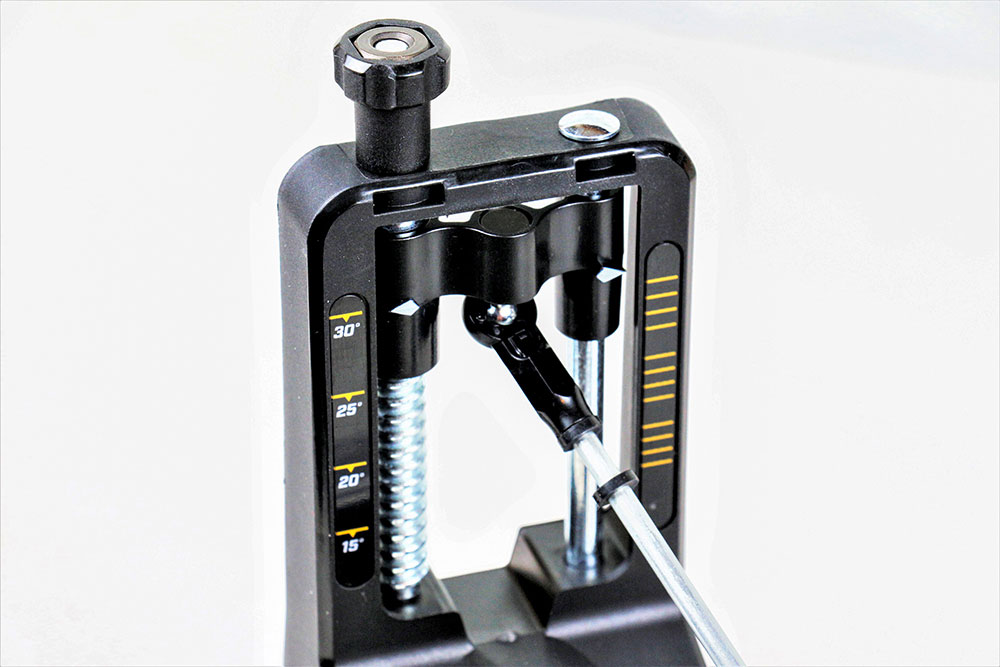 The Precision Adjust Sharpener is aptly named. It has a wide range of adjustability so you can dial in the precise sharpening angle you want for the tool you’re sharpening.

Different types of blades work best with either a wider or more narrow edge depending on the knife’s intended role—EDC, hunting, filet, bushcraft, kitchen, etc. Being able to fine tune the angle for a particular knife gives you the precise edge you want.

Second, you only have to rotate the sharpening block to change between the three abrasives rather than swapping out various stones. That’s quicker and easier. The abrasives are replaceable too should they ever wear down. 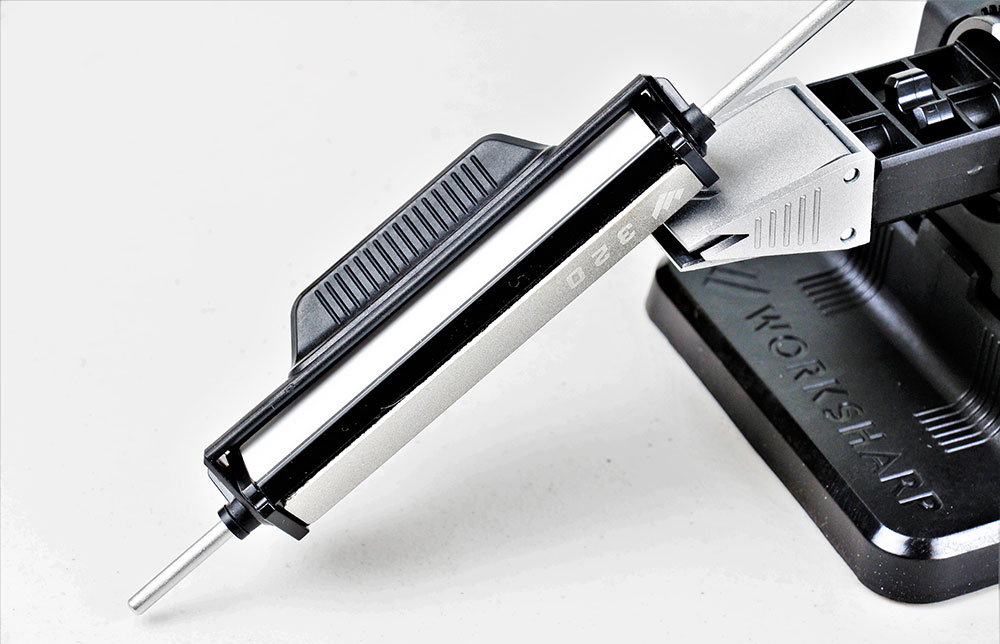 Third, the clamp that holds the knife can be rotated 180 degrees in the base with the knife in place. So, you don’t have to reclamp the knife to sharpen the other side of the edge. The clamp is held in the base with a magnet too, making it easy to install and remove to fit a knife into it.

I tried this sharpener on a couple of my bushcraft and EDC knives and found it to be very efficient and easy to use. I like the methodical, easy-does-it approach to a manual sharpener.

The Knife & Tool Sharpener Mk.2 is an electric-powered belt sharpener that’s an improved version of an earlier Work Sharp model. It can be used to sharpen all knives—including serrated edges—household scissors (not salon grade shears), lawnmower blades, axes, and garden tools. 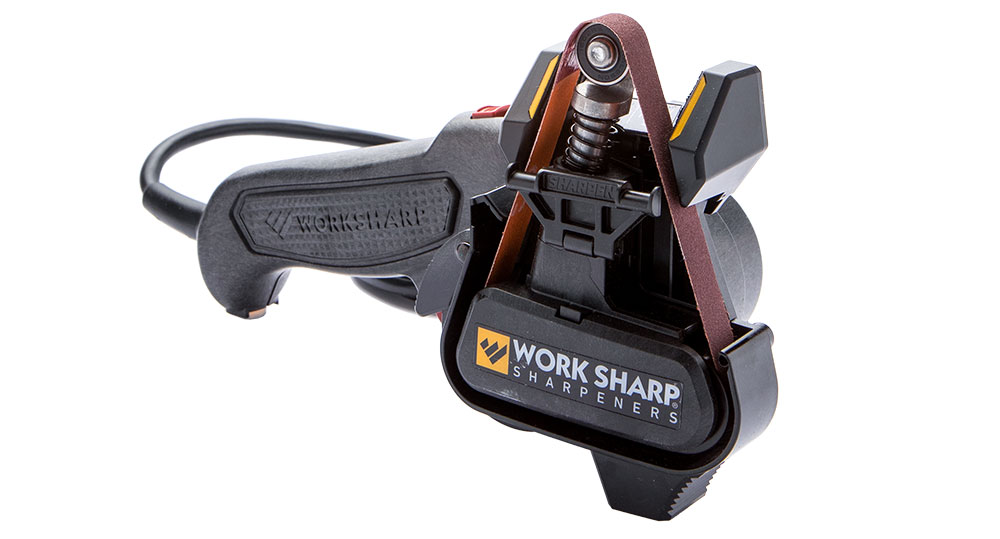 The Knife & Tool Sharpener Mk.2 is an electric sharpener that uses replaceable abrasive bands to sharpen a variety of tools very quickly.

It features two sharpening speeds and precise trigger control operation. A flip of a switch changes the sharpening guide between the 20- and 25-degree sharpening angles. That angle guide has a scratch-resistant leather lining to protect your blade’s finish.

“The Mk.2 comes with six flexible abrasive belts, including two each of Work Sharp’s color-coded coarse, medium, and fine belts.” 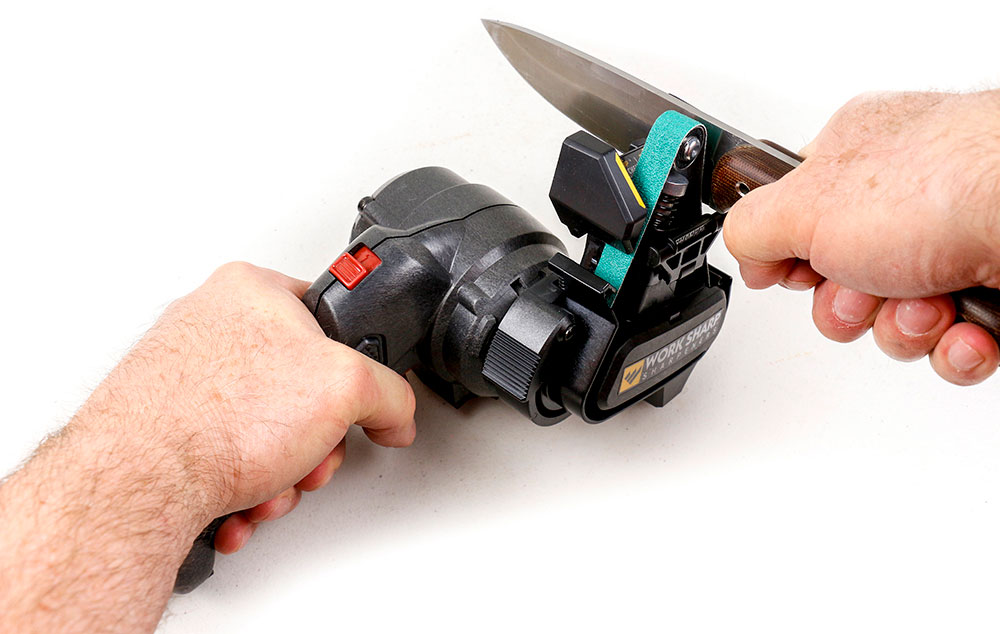 The author found that just a couple of pull-through strokes of a knife on each side of the blade showed fast, remarkable improvement in the sharpness of the edge. 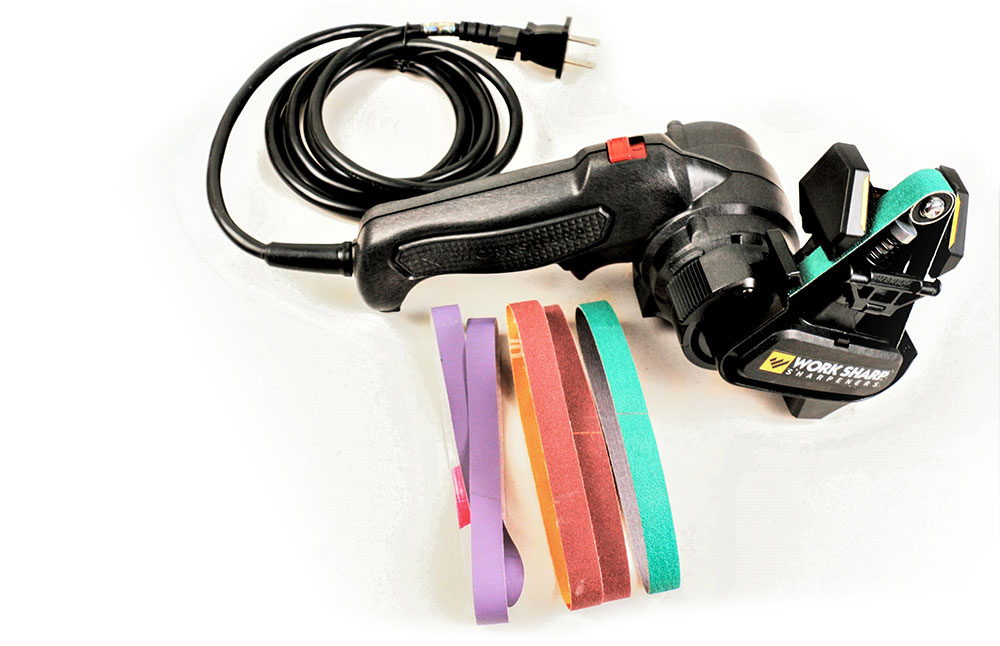 The Mk.2 comes with six bands in three different abrasive levels to handle everything from garden tools to fine cutlery. Changing the abrasive belts is a simple operation. A blade guide keeps the knife aligned properly as you pull it through the sharpener.

The Mk.2 comes with six flexible abrasive belts, including two each of Work Sharp’s color-coded coarse, medium, and fine belts. You’d normally use the medium and fine belts and the slower speed for most knives. The coarse belts and faster speed would be reserved more for heavy duty chopping and cutting tools.

The sharpening head rotates to several positions, depending on whether you’re using the Mk.2 on a hard, flat surface such as a bench or tabletop or freehand on a large tool or mower blade. The belts are easy to swap out, and Work Sharp offers replacements. 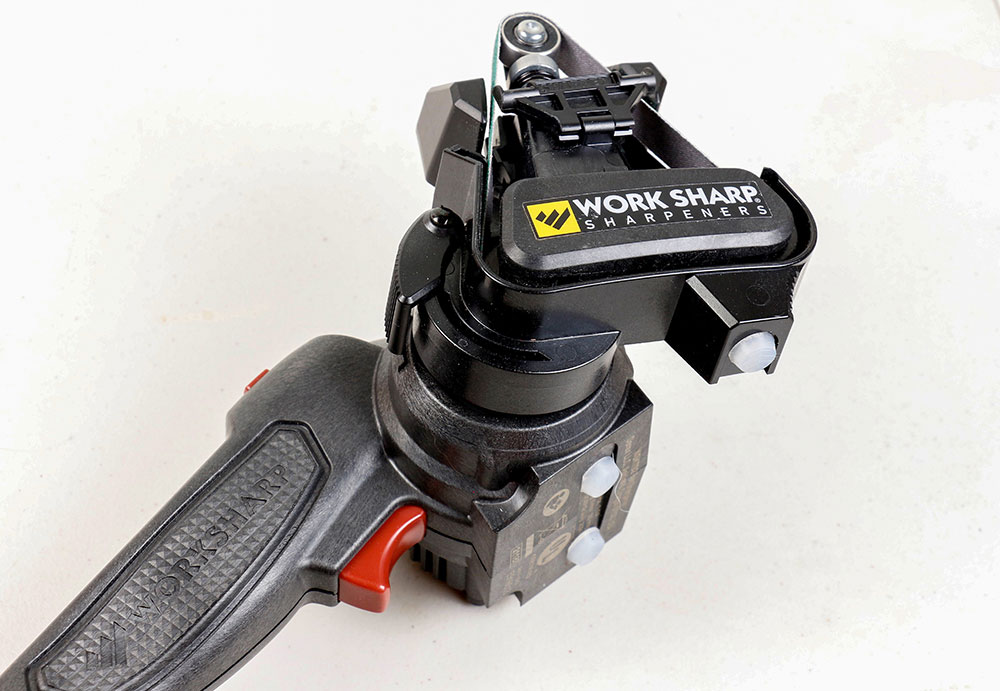 There are synthetic feet on the bottom of the Mk.2, which help to keep it from “walking” as you’re sharpening. The trigger provides very good control over this power tool. 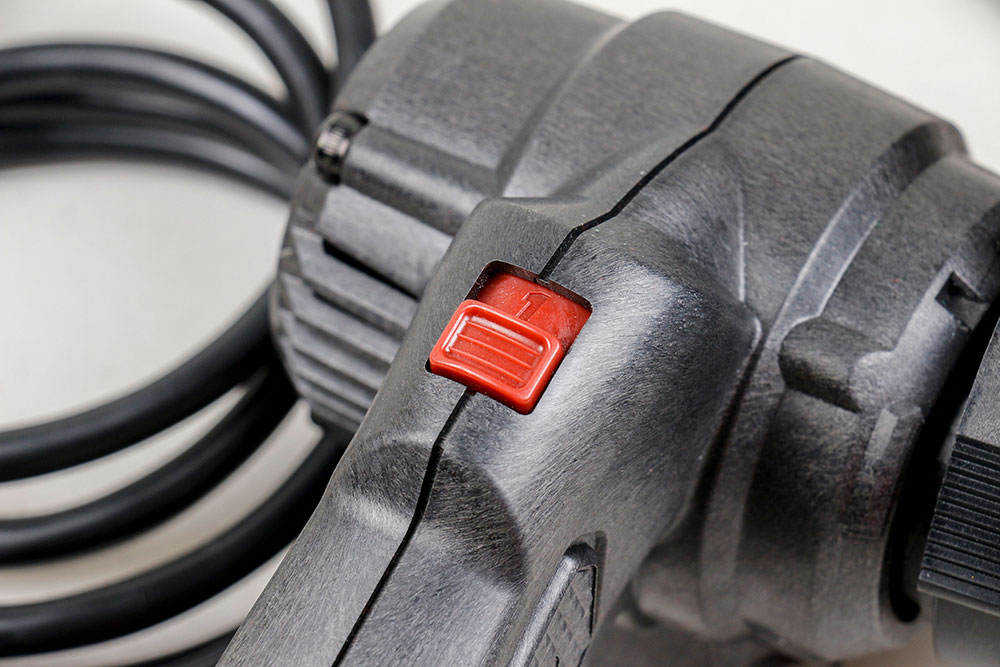 The Mk.2 has two operating speeds. The slower speed is the one you’ll use most often for sharpening knives.

The only problem I had in putting the Mk.2 to the test was finding knives around my house that really needed help. Then I remembered my kitchen knife drawer and the several steak knives there that were very dull. Putting the Mk.2 on my kitchen countertop and donning safety glasses, I went to work. I was almost giddy with delight at how quickly and easily these knives sharpened. Normally, putting power tools in my hands can be a risky proposition. I’ll have no hesitation in using the Mk.2 in the future, especially when it comes to heavy duty sharpening tasks on machetes and the like. 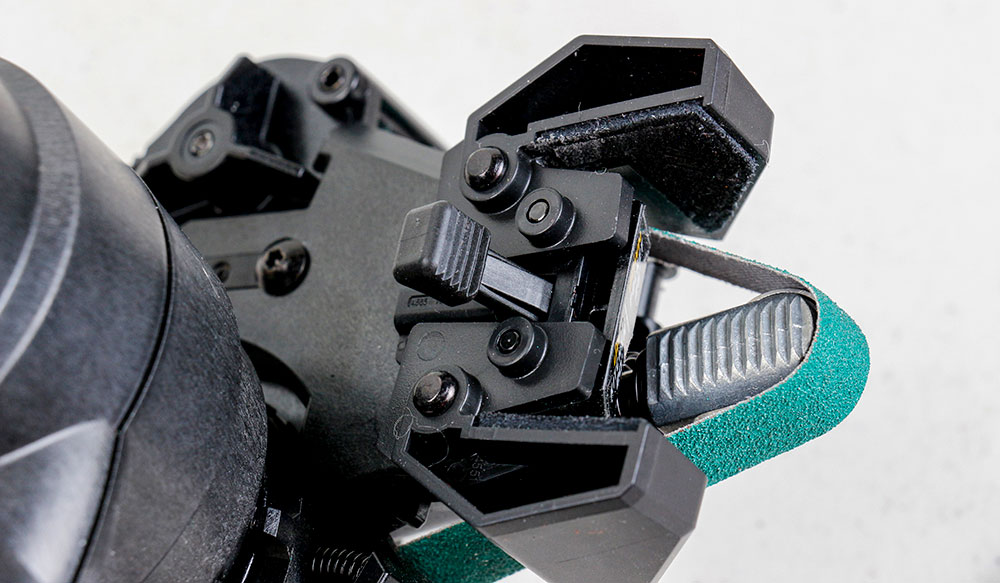 With the Mk.2, you can select from two sharpening angles: one for kitchen knives and one for other blades.

These two Work Sharp sharpeners are good products that perhaps have been flying under the radar compared to those of some other high-profile brands. They’re well-designed, sturdy, effective, and fast. With sharpeners such as these, no one needs to line up outside my office any longer to say, “Sarge, can you sharpen my knife for me.” KI

YOU NEED MORE PORTABLE SHARPENERS TOO

I have sharpeners everywhere: tucked in my backpacks, in my camping bin, even in the center console of my car. That’s because sometimes I can’t wait until I get home to touch up the edge on a knife.

The Work Sharp Guided Field Sharpener is another compact option for taking your sharpening capabilities on the road. It’s a complete knife and tool sharpener for field applications that can be used on flat, curved, and serrated blades, as well as fishhooks, and camp tools such as axes, hatchets, and machetes.

It includes five sharpening abrasives: two diamond grit plates, two ceramic rods, and one leather strop that is pre-conditioned with a micro-abrasive to finish your blades to a razor-sharp edge. It has inclines at each end to act as angle guides to aid in maintaining consistent sharpening angles best suited to hunting knives, pocketknives, and filet knives.

The diamond grit plates are held in place with magnets. The plates can be removed to expose a broadhead wrench and a small storage compartment. You can flip the diamond plates face down for storage or transport so they don’t scratch other gear. The Work Sharp Guided Field Sharpener is assembled and quality checked in Ashland, Oregon. It has an MSRP of $34.95.