When you stroll down to the Dixie Gun & Knife Show at the North Carolina Fairgrounds in Raleigh on a Sunday afternoon, the last thing you expect to hear is a German accent. But that’s just what I heard, y’all. I had to stop at that table and figure out just what was going on.

Oliver Schneider and his family were what was going on. He’s a blacksmith who is part German and part Lumbee. His Spike-Knife Warrior blades are surprising hybrids forged from railroad spikes, horseshoes, and lawnmower blades.

Oliver was born and raised in Germany, and he continued to live there as a young adult. “We Germans, we love our blades,” he told me. He married his childhood sweetheart, Krista and they had two sons.

Later on, Krista did some research and discovered that Oliver’s biological father had been a U.S. serviceman stationed in Germany and that he was a Lumbee Indian living in Pembroke, North Carolina.

So, Oliver, Krista, and their two teenaged sons made the unlikely jump to Robeson County, North Carolina. “As soon as I crossed the Lumber River, I felt like a core was cracked,” Oliver has told The Robesonian a couple of years ago. “I just felt a wave of emotion when I drove over that black water. I knew immediately that I am much more home here than anywhere else.”

Oliver’s sons had become interested in blacksmithing back in their German hometown Herrstein, which attracts lots of tourists because it still has buildings dating back to medieval times. The region hosts festivals where craftsmen demonstrate blacksmithing and other medieval crafts. When the family moved to North Carolina, Oliver built a forge for his boys so that they could do a hobby together as they adjusted to their new home.

“My mark stands for the four members of my family — my wife and my two sons,” Oliver told me. “Four dots in a circle because they are my world.” 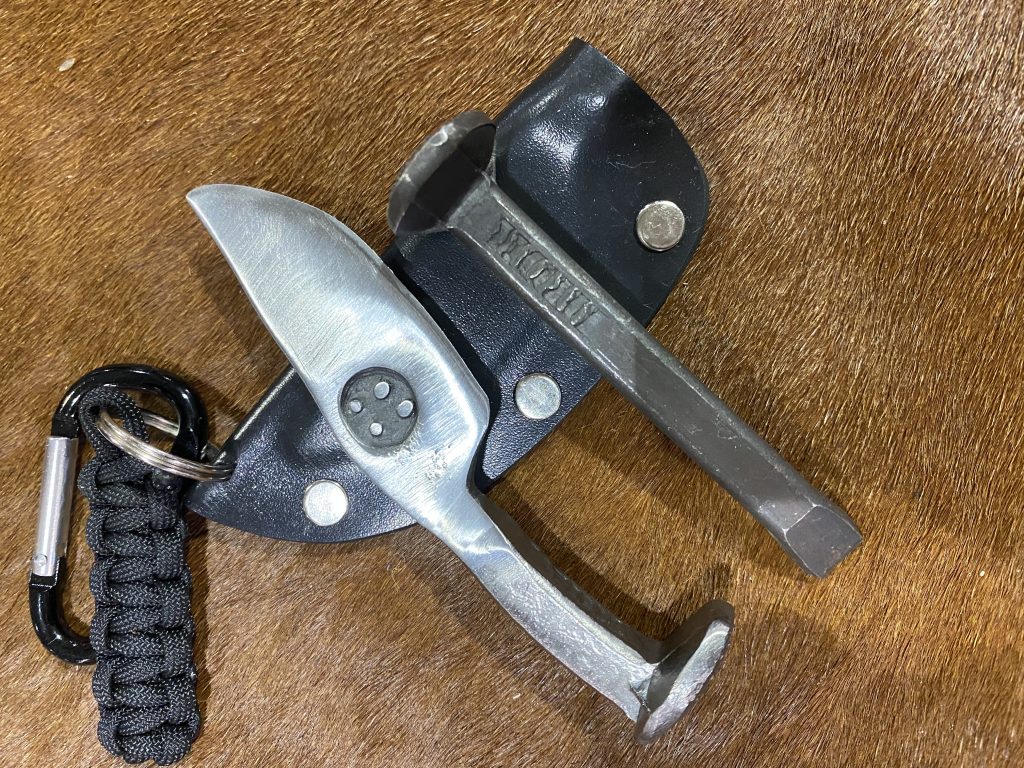 Oliver’s mark is clearly visible on this keychain knife.

His sons’ smithing interests waned at times, but Oliver didn’t want to let the forge stand idle. Over time, he became a knife maker himself. The family joins him at the forge and at shows.

Oliver told me he uses only vintage railroad spikes as material for his knives because the high carbon is essential to quality. He also forges knives from horseshoes. I think my favorite piece is a clever cleaver fashioned from an old lawnmower blade. 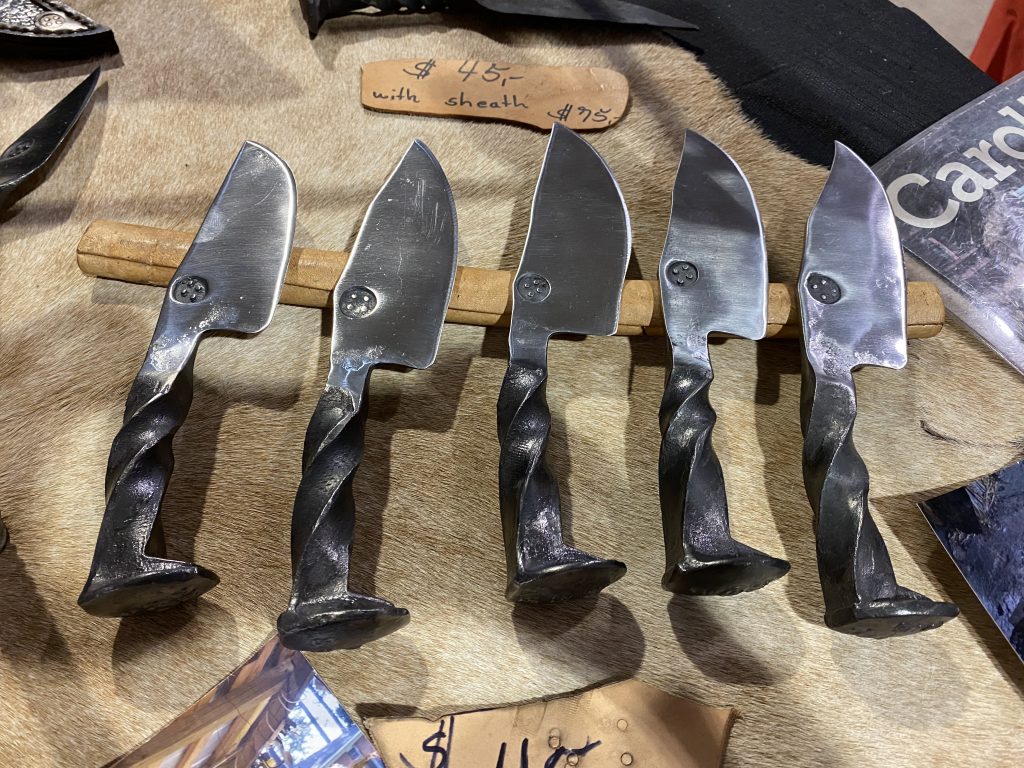 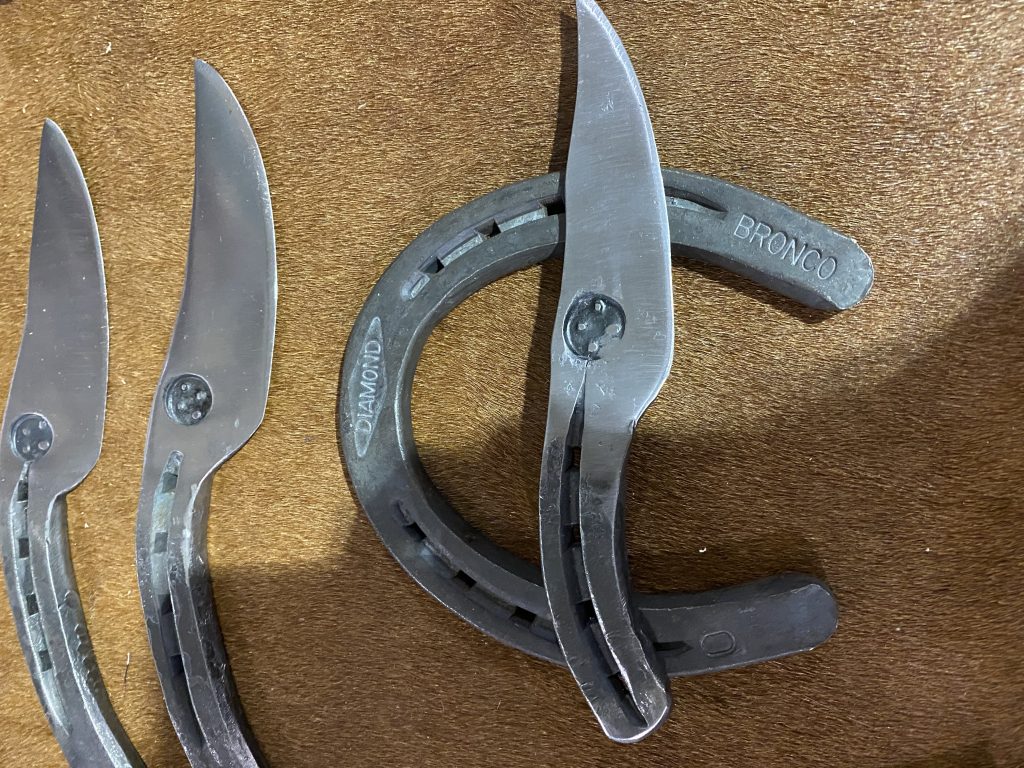 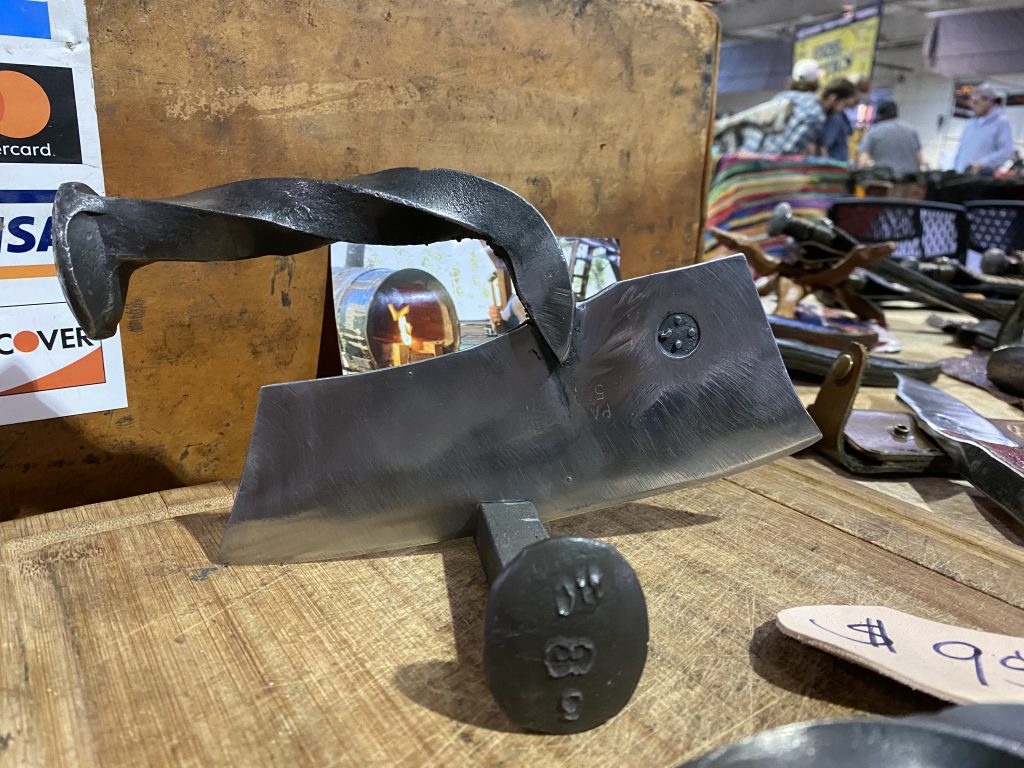 Oliver’s special pride and joy is a dual-edge dagger that’s serrated on one side. It’s a Lumbee knife, he says, with a snakeskin sheath. Sand-dwelling snakes and water snakes each give a sheath a different look. He used a rattlesnake skin for the sheath he made for his Lumbee Tribal Knife. Check it out.

For videos and pictures of Oliver and his sons at their forge, visit their Facebook page at Facebook.com/spikeknife/