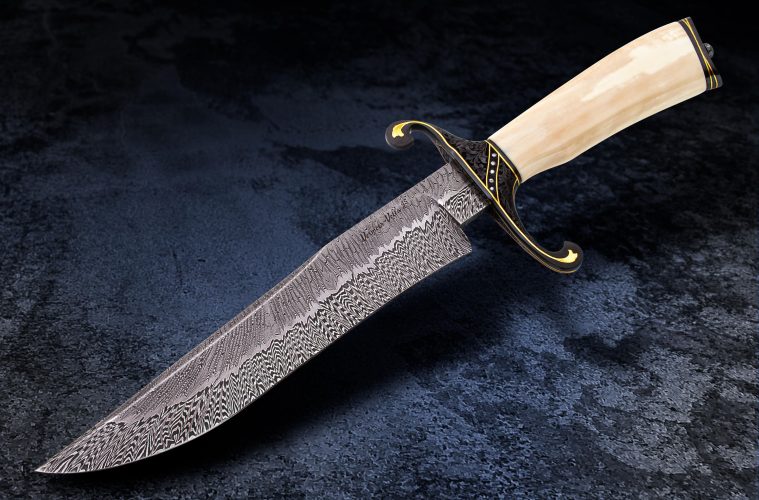 Knife Rights has donated Freedom’s Steel X-Forged in Liberty Damascus Bowie to the National Rifle Association’s Institute for Legislative Action (NRA-ILA). This one-of-a-kind knife will be auctioned at the NRA-ILA Dinner and Auction May 27 during the 2022 NRA Annual Meetings and Exhibitstaking place in Houston, Texas.

“We must all be active and united defenders of our rights and freedom, or we will see them taken from us. Knife Rights and NRA-ILA have a common interest in protecting our civil rights and specifically the right to own and use tools appropriate for self-defense,” said Doug Ritter, Knife Rights chairman and founder.

This Knife Rights Knife Is One Imposing Blade

Kelly Vermeer-Vella forged this S-Guard Bowie in her signature “riptide” Damascus pattern made of 1075 and 15n20 high carbon steels. This impressive Bowie has a 9-inch blade and measures 15 inches overall. Vermeer-Vella is a farrier and bladesmith from Oakdale, California. She is one of seven female American Bladesmith Society bladesmiths and is a Forged in Fire champion. She has been forging knives since 2011.

This Bowie’s handle is made of fossil walrus ivory, which was donated by Mark Knapp of Edge of the Arctic Trading Post in Fairbanks, Alaska.

The guard and pommel are engraved with 24K gold inlay by Alice Carter, who is a member of the Firearm Engravers Guild of America. Carter started engraving knives 15 years ago, and she also engraves firearms.  In the guard she set 10 diamonds from an heirloom family ring, donated by Sue and Doug Ritter.

Included with the knife at auction will be a first edition of “A Sure Defense: The Bowie Knife In America,” the definitive book on the history of the Bowie knife. 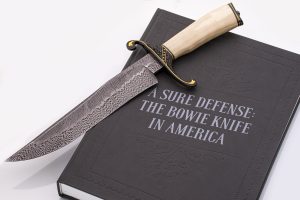 This is the tenth year that Knife Rights has donated a Freedom’s Steel knife, raising over $265,000 for NRA-ILA the first nine years.

According to Ritter, every component of the Freedom’s Steel X-Forged in Liberty Damascus Bowie “was donated to Knife Rights to support its efforts to defend and enhance our own right to carry knives as tools used daily by millions of Americans and at times wielded as an ‘arm’ in self-defense.”

The NRA-ILA is one of the leading organizations continuing the fight for preserving our Second Amendment rights. Knife Rights is on the second front of that battle, as the organization that works toward the enactment of legislation that preserves our freedoms when it comes to knives while helping to overturn nonsensical laws currently on the books. The organization has helped with the creation of 36 bills repealing knife bans enacted in 25 states and over 150 cities and towns since 2010.

For more information, go to www.KnifeRights.org. And be sure to check back with KnivesIllustrated.com for more of the latest news from the knife industry.