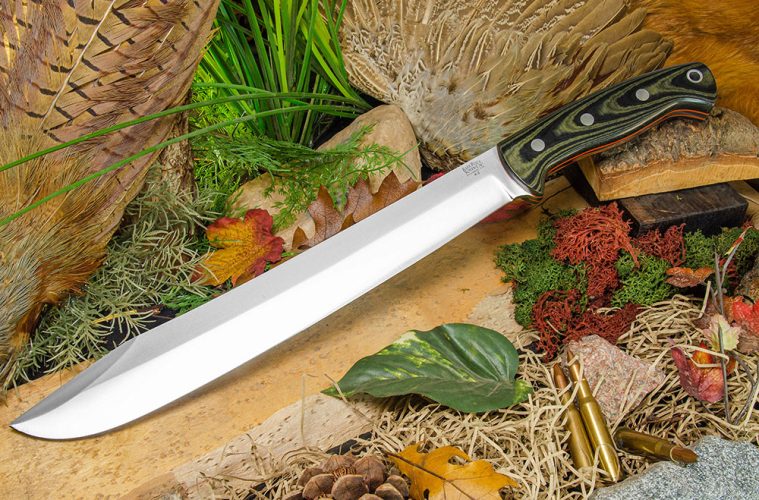 Large Knives: The Ultimate in Utility

LARGE KNIVES RELIED UPON AROUND THE WORLD

Whether you’re clearing brush in the back 40 or defending your family from the zombie horde, having several inches of razor-sharp steel at your side will be welcome. Large knives are present in just about every culture, regardless of region. They’re just plain handy for many chores, no matter where you live.

For the purposes of our discussion, we’re going to concentrate on four major types of these bad boys:

Doing so will take us on a tour throughout several parts of the world, from Central America, Africa, and the Philippines, to Europe, and then the United States.

As a general rule, these bladed implements were designed for a variety of tasks, up to and including combat. Let’s face it, a big blade is as much of a weapon as it is a tool. That said, for most of us, the largest threat we’ll face with one will be towering vegetation that needs to be taken down to size.

When the word “machete” is uttered, there are two kinds of people. One group will picture an intrepid explorer carving his way through dense jungle, all the while listening for the moment when the natives’ drums stop beating. The other imagines a hulking brute wearing a hockey mask stomping his way through a summer camp, punishing teens for daring to drink or make out.

As a practical matter, in one form or another the machete has been used for generations throughout tropical and subtropical parts of the world. While several variations exist, the basic design involves a blade that’s typically 12 to 24 inches long. 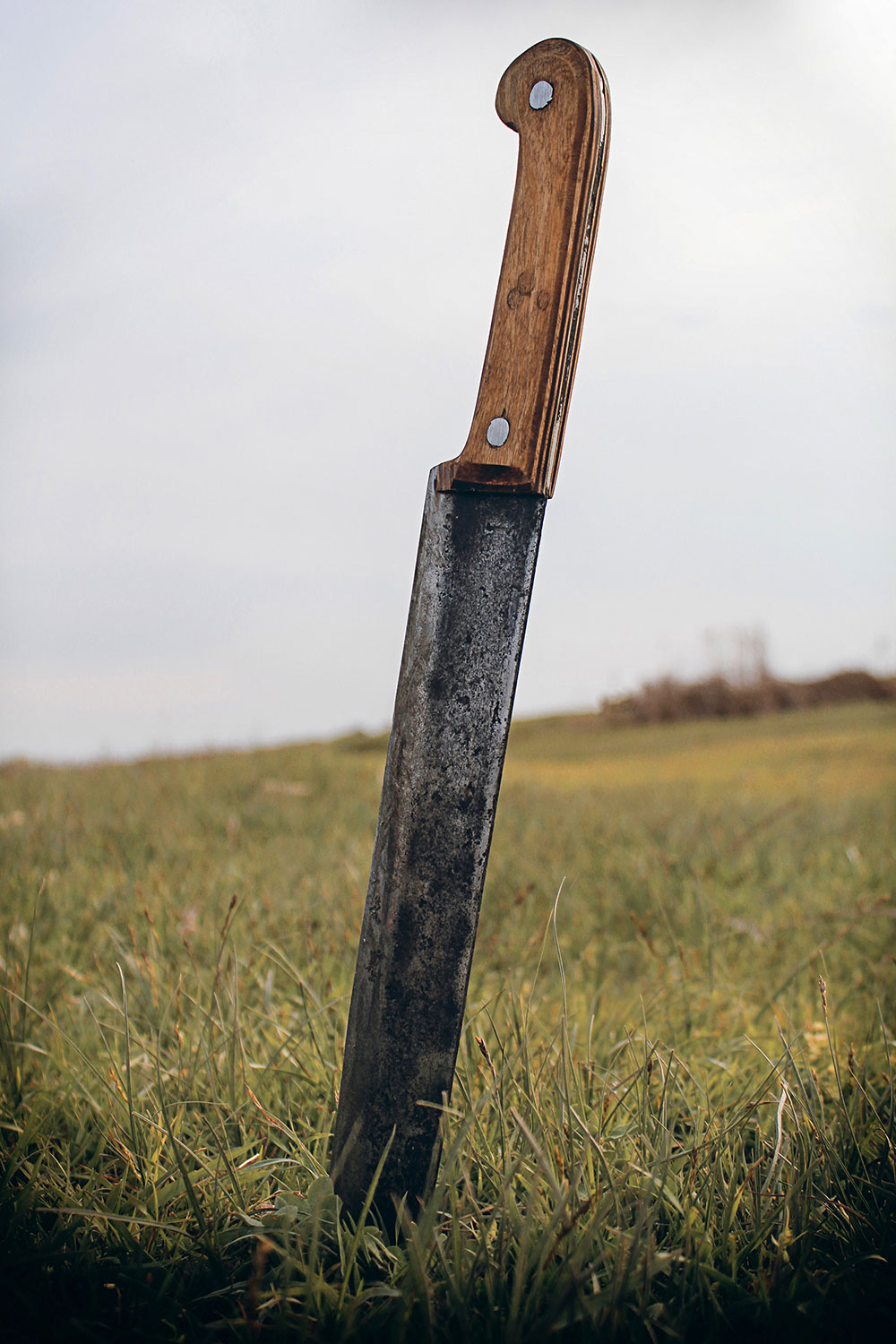 Virtually every culture uses some form of large knife, typically for agricultural and land clearing needs, but also for defense when appropriate. Unsplash photo.

The bush or Latin style machete is perhaps the most common, or at least the most familiar in appearance. As the name implies, this style comes from Latin America. It has a straight back and a straight edge that curves up to the tip. They are typically lightweight to lessen arm strain from swinging it over and over.

The bolo machete is from Southeast Asia. It is notable for its shape, with the forward end of the blade widening. This adds weight when swinging it. The bolo is used primarily for agriculture, particularly in narrow rows of crops. This is where it excels, as the power added by the widened end of the blade allows it to be more effective in closer areas.

Also popular in that region as well as the Philippines is the barong. Characterized by a leaf-shaped blade, it has plenty of belly for cutting and slicing. The barong also typically has a handle that rests at a bit of an angle to the blade, with a flare to the butt end to help the user maintain a secure grip. 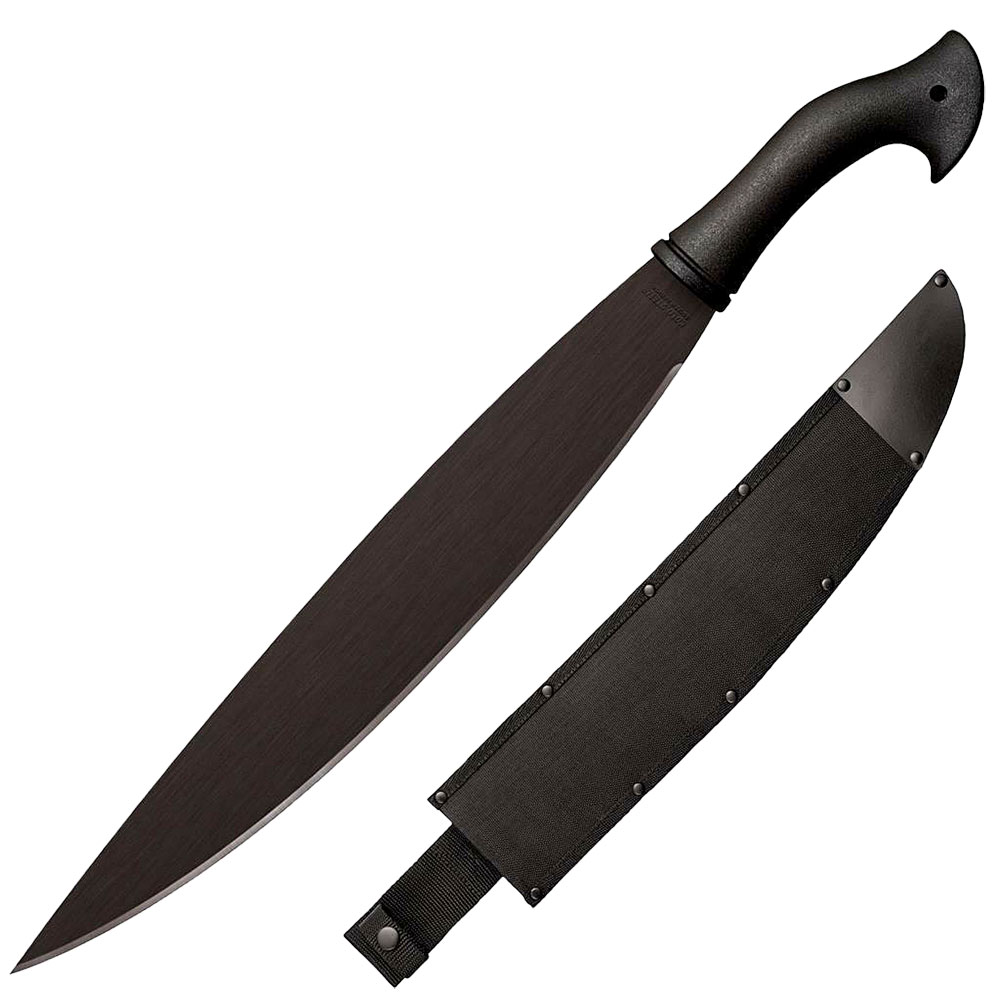 The barong machete has a distinctive leaf-shaped blade that has a lot of belly. This model is from Cold Steel. Cold Steel photo.

In some areas, the parang and the golok are synonymous, despite there being some differences in their designs. Both styles originate in the Malay Archipelago, which includes the Philippines as well as Indonesia. They’re both curved, but the golok tends to be a little straighter and heavier than the parang. They both have handles similar to the barong.

The panga comes from Africa and is also popular in the Caribbean. It has a wide tip like the bolo, but it sweeps upward at the end, terminating in a sharp point. The forward weight assists with chopping while the deep belly affords great slicing ability.

The bolo is characterized by the widening blade near the tip, such as on the Bolo Gator from Gerber Gear. Gerber Gear photo.

Now, here’s the thing. Machetes aren’t generally meant for heavy-duty hardwood chopping. They’re used for carving trails through brush, tall grasses, bamboo, and such. If you pay attention to where these various machete styles came from, none of them originated from temperate forest environments. That doesn’t mean that the machete has little use for those who live in northern climates. But, just like any tool, you need to understand its limitations to use it most effectively. If you’re clearing a shooting lane, the machete is probably a good choice. If you’re trying to fill the woodshed before winter, something a little more robust might be a better choice.

While the origin of the seax blade is a little murky, we know that it became very popular with the Scandinavians. It was sort of the standard knife for some Germanic tribes and even the Saxons take their name from the seax.

“…a big blade is as much of a weapon as it is a tool. That said, for most of us, the largest threat we’ll face with one will be towering vegetation…”

Unlike today, back then they didn’t have the luxury of being able to use different knives custom designed for specific uses, such as one for harvesting crops, another for dressing game, and yet one more for defense. Instead, it was pretty much a one-size-fits-all affair. While we might tend to think of Vikings brandishing giant axes and what not, truth be told the seax was their version of an EDC knife. 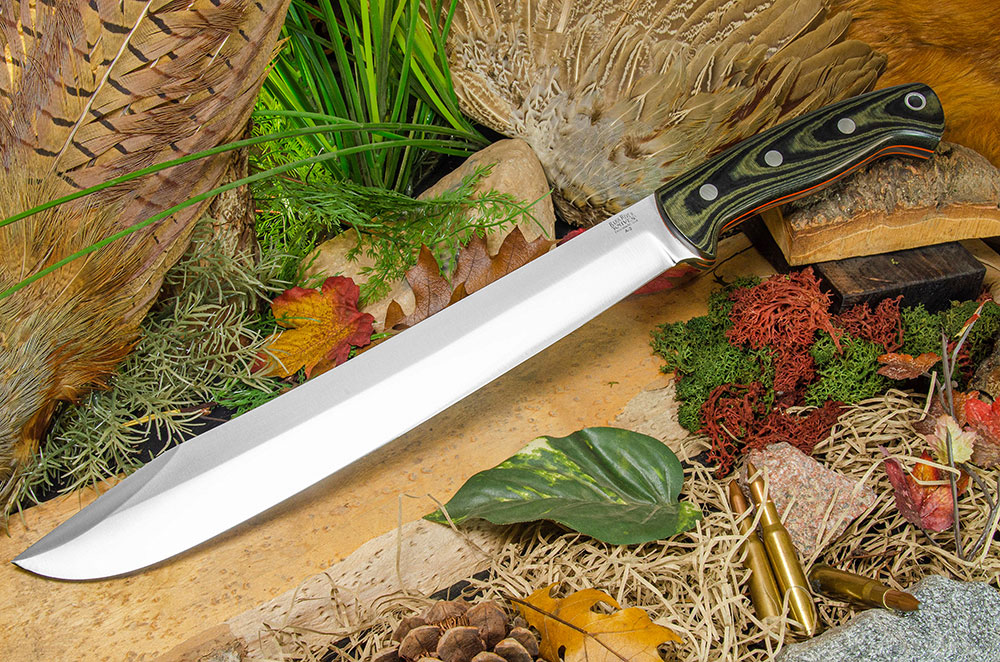 It has a distinctive shape, with the spine tapering down to a sharp, angular point. At least, that’s the modern translation of the style, a variation called the broken back seax. Blade length varied quite a bit, with the smallest seax running about 7 inches and some extending beyond a couple of feet.

In addition to chopping duties, the seax also lends itself nicely to being a makeshift draw knife. The design allows you to carefully grasp the spine with both hands and pull the edge toward you across the material being worked. For those who insist every tool have multiple uses, this is good to know.

There are a few misconceptions about this style of knife. Despite what you may have heard, the kukri wasn’t designed specifically for beheading or splitting skulls. It was, and still is, very much the EDC knife of the Nepalese people, used as much for land clearing as it is for self-defense.

“If the Knife feels awkward, you’ll find reasons to leave it at home, which just means you’ve wasted money on a tool you’re not going to use.” 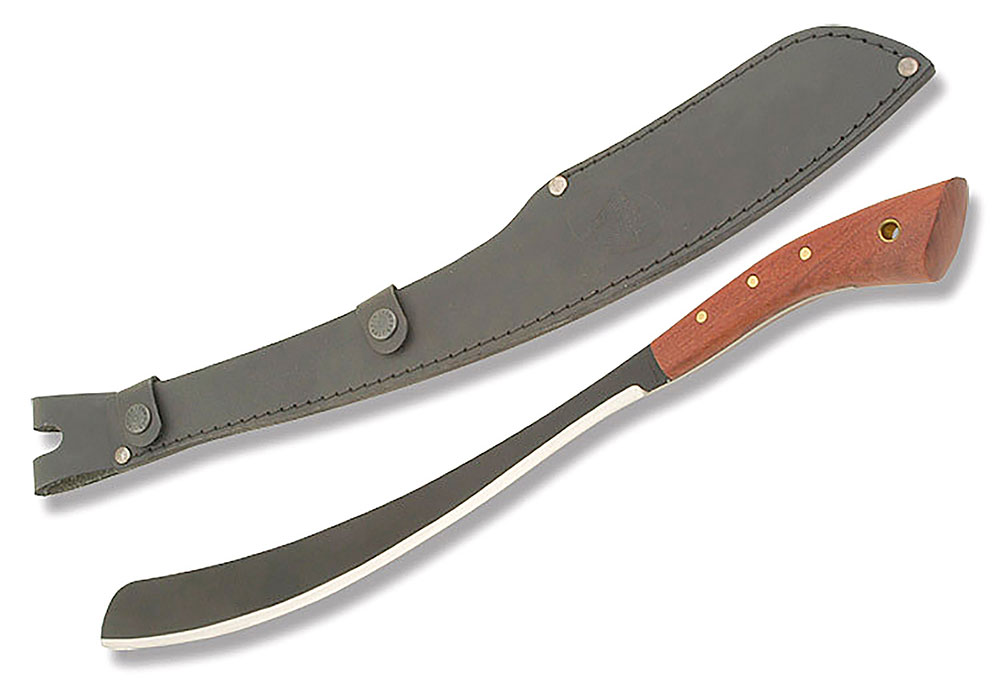 The parang has a distinctive curve, as shown on this model from Condor Tool & Knife. DLT Trading photo.

The kukri is an easily recognized pattern or profile, with the blade making a sharp angle downward about midway down the length. This forward end is also wider than the rest of the blade. As with other ancient knife designs, the true origin is lost to antiquity, though there are theories that it developed as sort of a hybrid between a sickle and a bent hunting stick or that it was introduced to the region by travelers from Europe. 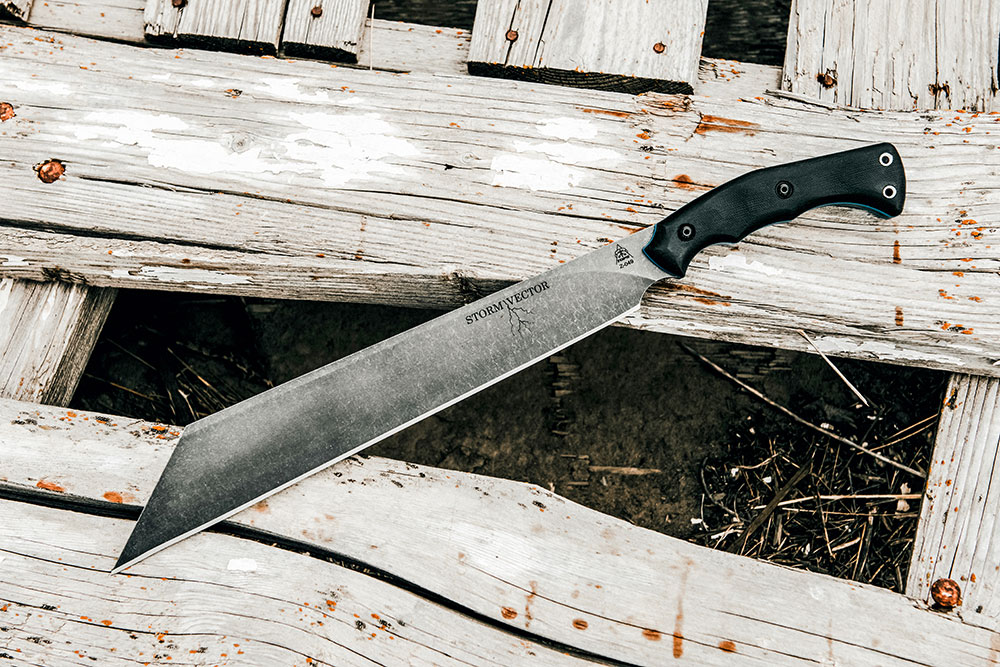 The seax profile is angular, as seen with the Storm Vector from TOPS Knives. TOPS Knives photo.

The kukri knife lends itself quite naturally to chopping. It works well for splitting wood as well as hacking shrubs. Despite the weight-forward design, a well-made kukri won’t feel abnormally unbalanced. Some users will keep the edge nearest the handle razor sharp for carving duties as well.

The Storm Vector is a great modern take on the broken back seax. TOPS Knives photo.

The average blade runs about 12 inches or so, though this can vary quite a bit depending on the maker. Traditionally, the sheath will have two smaller blades secured inside. One will be dull and is used to sharpen the kukri. The other will be sharp and is used as a utility knife.

Like the kukri, there’s a lot of misinformation out there about the legendary Bowie knife, including what it actually looked like. Today, just about any large clip point knife will be called a Bowie. But the first knives to bear the Bowie moniker were much straighter and looked like large butcher knives, which is pretty much what they were. They lacked guards and were fairly simplistic in style. 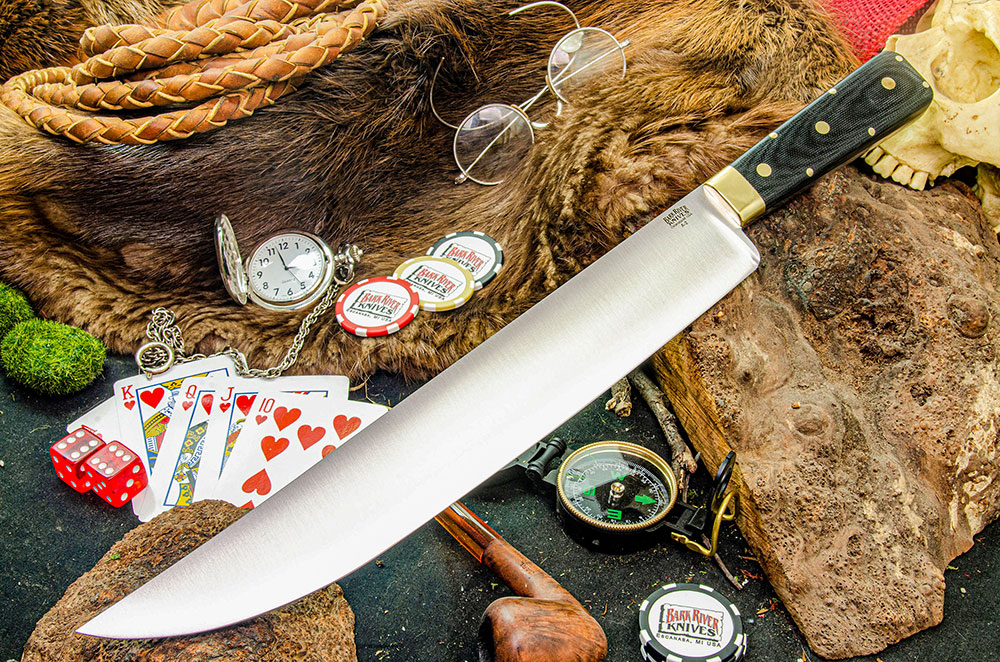 The Bowie knife gained notoriety after the so-called Sandbar Fight, which occurred on Sept. 19, 1827. A duel between Samuel L. Wells III and Dr. Thomas H. Maddox was to take place at midday and each was accompanied by their chosen seconds as well as a few others. James Bowie was on the side of Wells. All told, there were 17 people present, including several doctors or surgeons.

After they’d each fired two shots and missed their targets, Wells and Maddox resolved their matter with a handshake. However, things quickly went south, with other individuals who were present deciding to settle their own differences. Bowie was shot two or three times (accounts varied on that score) and stabbed at least once, but he killed one of his assailants with his knife. In doing so, he and his knife entered into the history books and became legends. 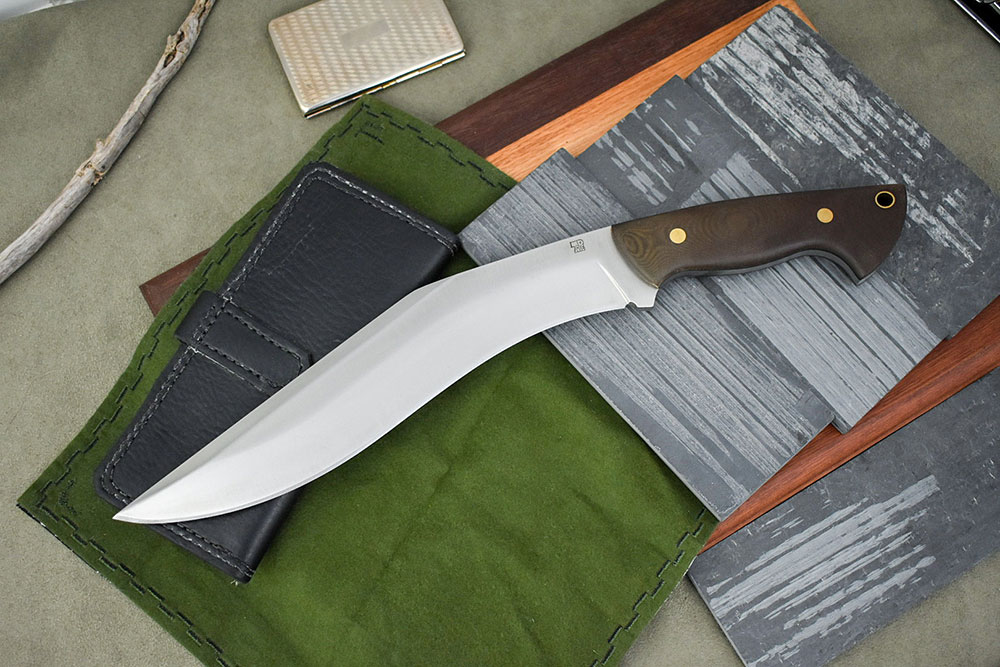 Dan Tope has revolutionized the kukri design with this rendition. Kat Tope photo.

Within just a few years, numerous knifemakers, including several in England, began making and selling Bowie knives of various designs, including with the now-familiar clip point blade as well as with a prominent guard.

As a practical matter, the Bowie knife as we know it today is a multipurpose tool. It can be used for processing game as well as light-duty land clearing. Despite the size, it is quick in the hand, with excellent balance.

WHICH ONE IS BEST?

As with most things in life, it depends. There is no one-size-fits-all answer. Realistically, it boils down to two things:

If you’ll be doing more trailblazing than anything else, the classic machete might be just the ticket. On the other hand, if you’re needing a tool that’s suited for chopping as well as garden harvesting, a mid-sized seax might be a better option. 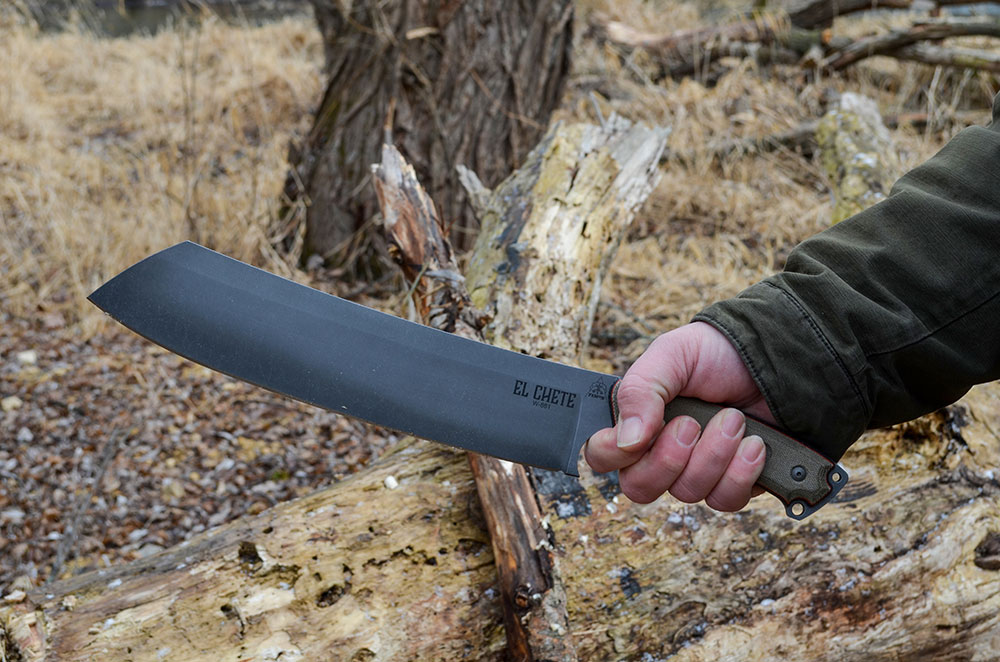 The El Chete from TOPS Knives is a hybrid sort of machete and will utterly destroy anything you put in front of it. Author photo. 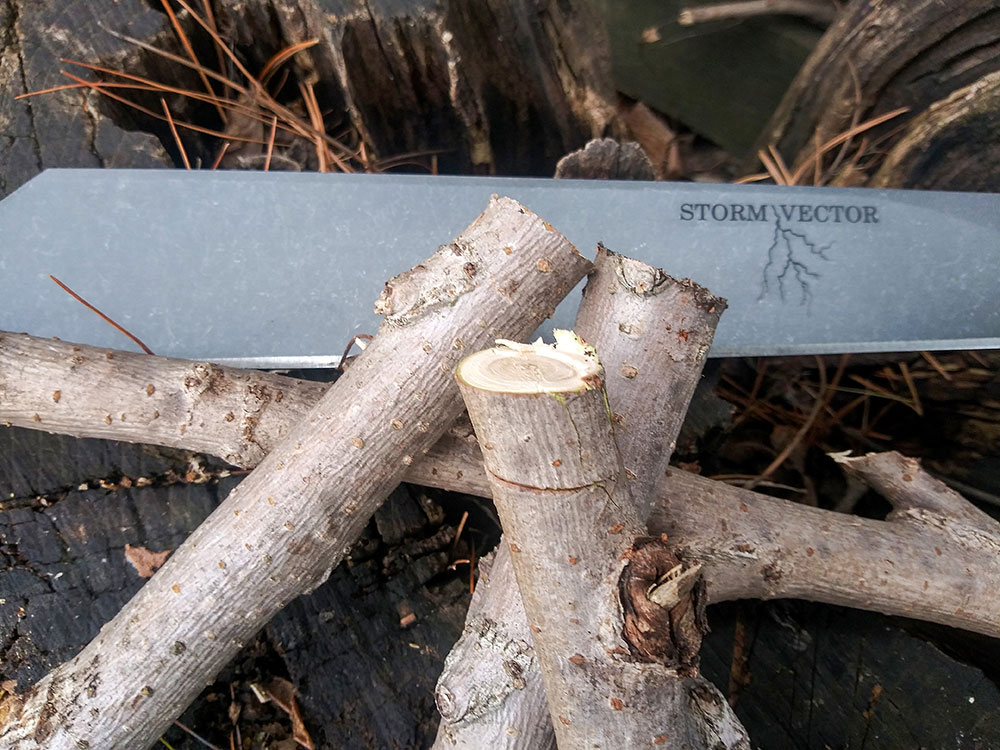 Comfort and ergonomics are also very important. If the knife feels awkward, you’ll find reasons to leave it at home, which just means you’ve wasted money on a tool you’re not going to use. Find something that fits your hand well and you’ll be searching for things to chop and cut. Just stay away from summer camps filled with hormone-raging teenagers and you’ll be fine.

The Bravo Machete from Bark River Knives is what we might call a hybrid style.

When I asked Mike Stewart about the design, he said, “I think it is not 100% typical of Central and South American Machetes. By having the blade get wider and the cutting edge go deeper, you are increasing the angle of attack without having to drop the handle out of the center line of the blade. I definitely used some Filipino/Indonesian influence. The cutting curve with the weight forward gives it the velocity needed to be more like a heavier knife without being heavy at all.” 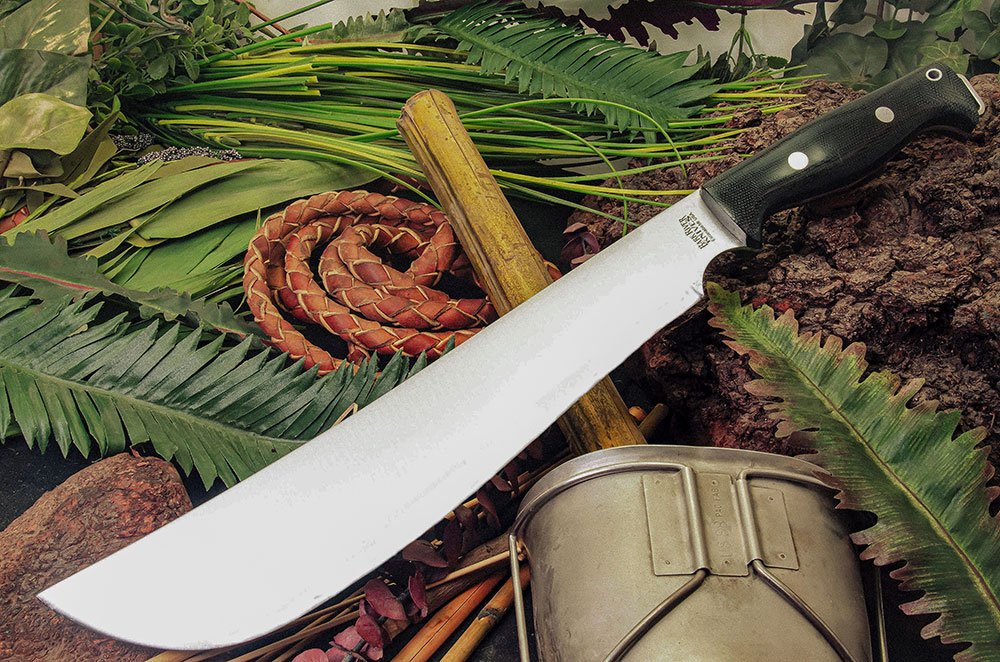 Putting that blade design on the company’s classic Bravo handle resulted in a wildly popular machete that’s well-suited for most environments.

A version of this article first appeared in the May/June 2022 print issue of Knives Illustrated.