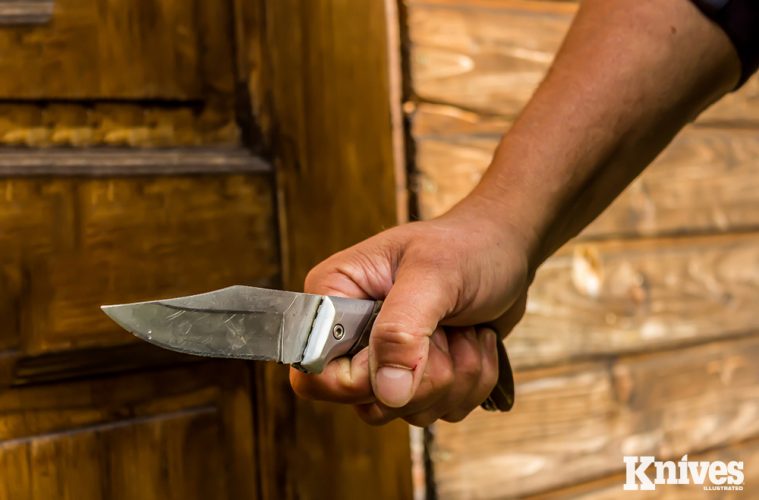 Of the many people who carry a knife daily, there are quite a few, I’d bet, who have it in the back of their minds that in a worst-case scenario they could use that knife as a defensive weapon to save their lives.

Among those are a good number who’ve had no training in how to use a blade effectively. I know, because I was one of them.

During my days as a police officer, I carried a knife every day and used it for a variety of ordinary tasks. Most of us did. Despite the lack of training in edged weapons, the reasoning persisted that it was good to have something on hand in desperation during a scuffle to prevent a bad guy from gaining control of your sidearm. 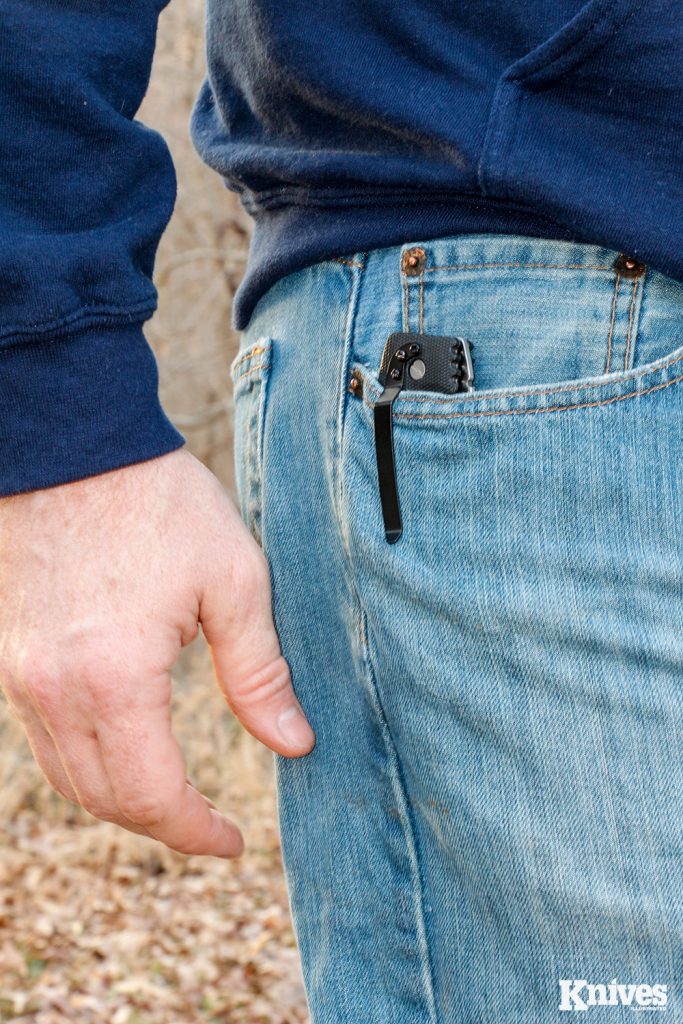 It’s a good idea to try to be consistent in where you carry your knife. It should be secure, but easy to access, preferably with either hand. Author photo

I had always believed that if I was going to carry a knife with self-defense as one of its many possible uses, I should probably get educated at least on some of the basics. But daily life always seemed to interfere.

Maybe my timing wasn’t the greatest, but in the midst of the zombie virus I decided it was time finally to act on my long overdue desire to receive some training.

Remote learning has been a reality for so many over the past year and a half. But I wondered how beneficial it could be to receive some martial arts training—specifically self-defense with a knife—over the computer without the instructor right there to help you with your techniques. Would it be like reading a book to learn how to swim or to ride a bike? 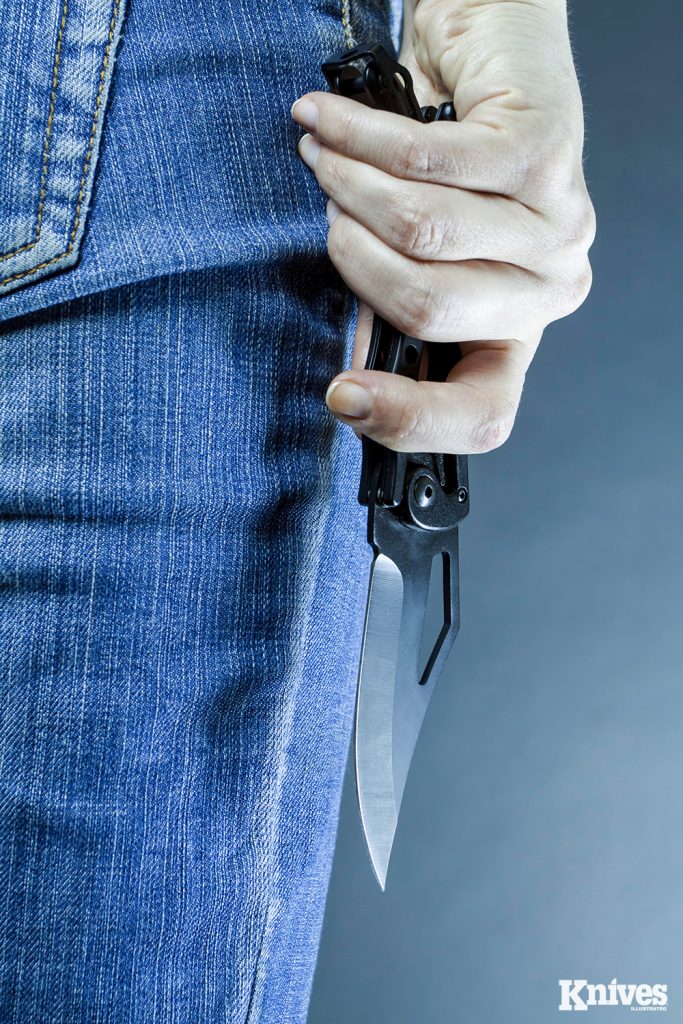 I found out recently when I enrolled in the Tiga Tactics Edged Weapon Certification Course. It entailed five Zoom sessions of two hours each. I connected my computer to my big screen television so I could get a close look at the techniques being demonstrated by the experienced instructors Conrad Bui and Patrick Vuong.

Naturally, I would have preferred in-person instruction. But this Weapon Certification course did prove very beneficial. It was a great starting point to learn about employing a knife in a self-defense situation.

Yet, many of the enrollees were seasoned martial arts practitioners, indicating that there’s always more you can learn. So, what was covered in this  course? 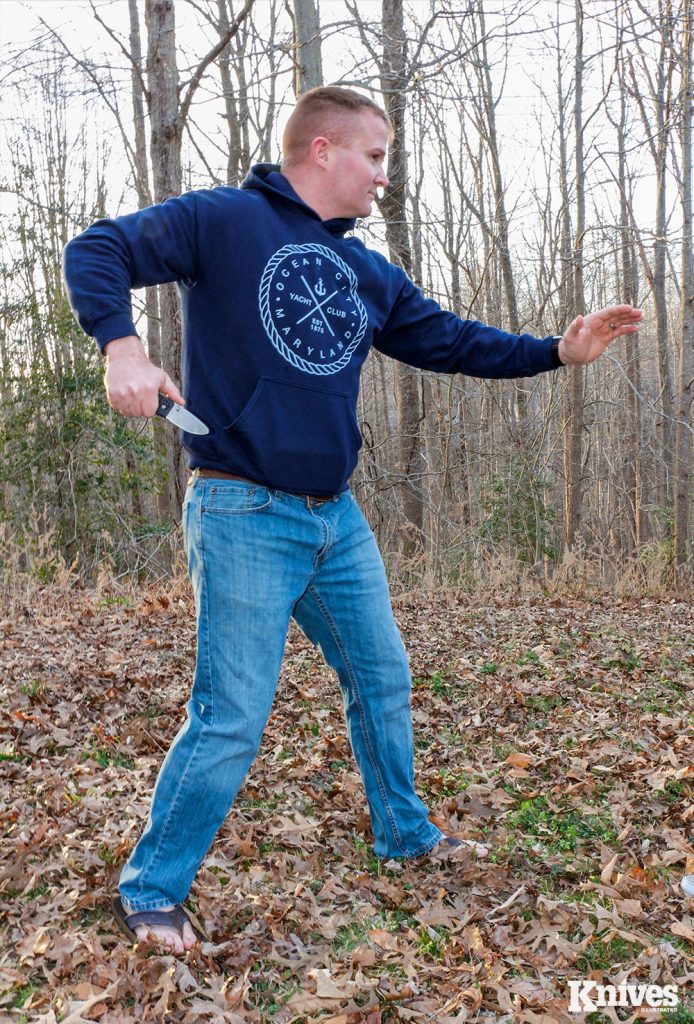 Because many confrontations happen suddenly in extreme close quarters, you should practice creating space from your attacker to give you a chance to get to your knife. Author photo

You don’t want to have to fight for your life with a knife. Tiga Tactics emphasizes that by encouraging us to develop a three-stage mindset: stay alert; stay humble; stay kind.

“It was an eye opener to practice deploying our blades…And it led me to reevaluate my carry choices—both what I carry and where.”

It starts with situational awareness. That entails developing a habit of staying alert to possible trouble, things that look suspicious or out of place in your surroundings and taking steps to avoid a conflict.

Staying humble is a matter of not getting too cocky and knowingly walking into a dangerous situation thinking you can rely on any self-defense skills you might possess.

There’s always someone out there tougher, stronger, faster, more skilled. Or maybe he’s just having a better day. Staying kind enables you to avoid disagreements that have the potential to escalate into violence.

Train for the worst but avoid trouble whenever you can without ego or pride becoming part of it. The Tiga Tactics motto says it best: “Run if you can. Destroy if you must.” 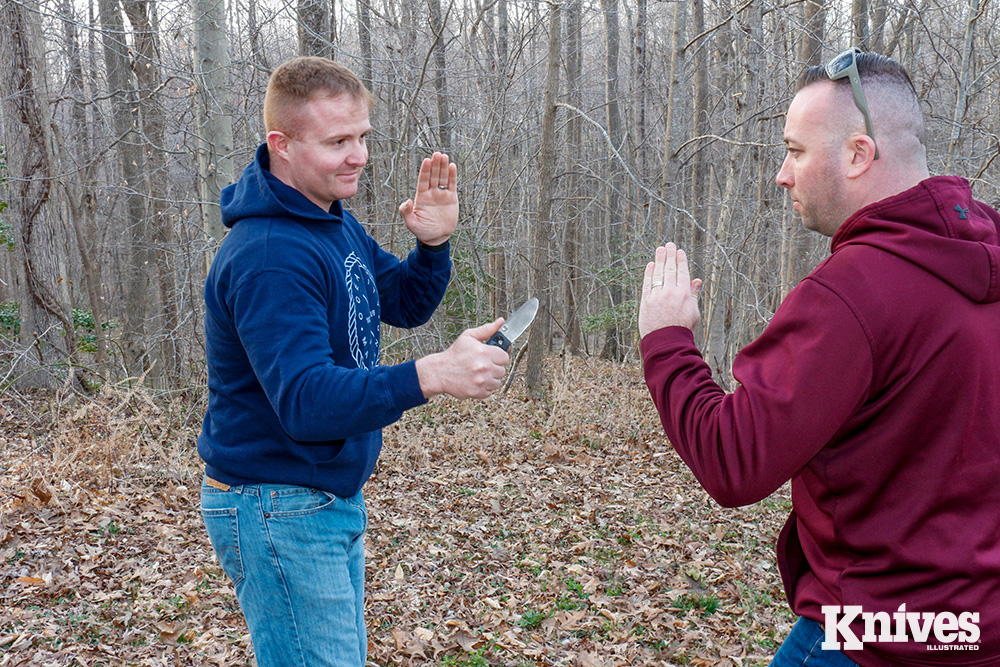 All photos by author. Once you deploy your knife, keep it between you and your attacker. Use a good, stable fighting stance that allows you to move freely. It helps to have a partner available when training your strikes and slashes.

During the weapon certification course, some consideration was given to the choice of a self-defense knife. Not surprisingly, a fixed blade has an advantage in that there’s no mechanism and no fine motor manipulation required to open the blade.

That being said, most will choose a folder either for legal considerations or as a compromise to practicality. Either way, your knife should have a handle substantial enough for a stranglehold grip.

Beyond that, you should probably steer away from gaudy blades with scary names that have no practical purposes other than to be used as a weapon. Why? Because you certainly will end up in court, justified or not, when you use a knife against another person. You don’t want to convey an impression that you were looking for trouble with the intent of using your knife. 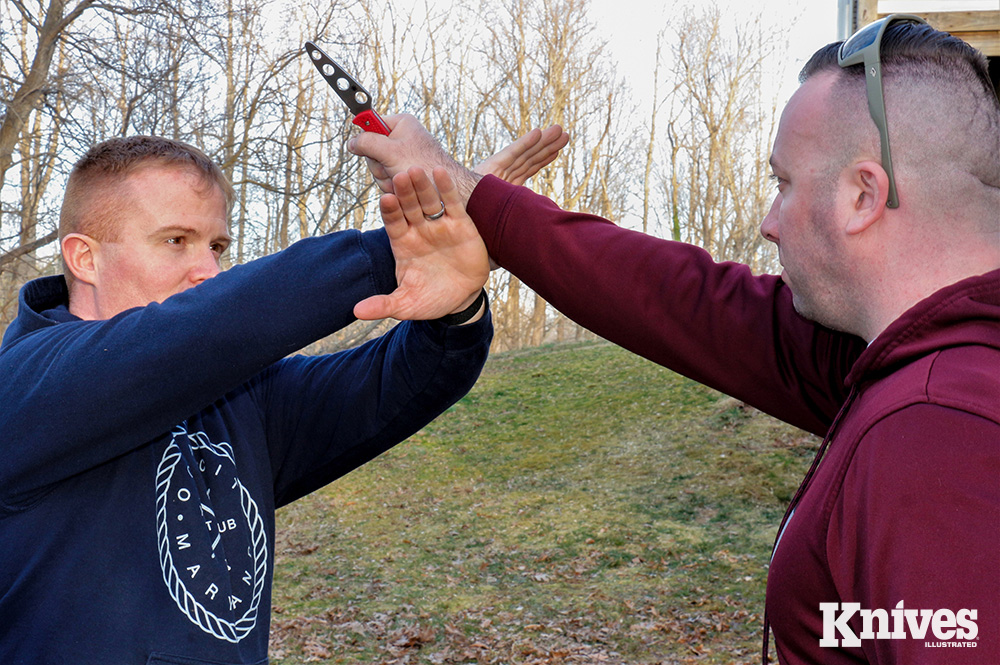 You will probably have to deal with the immediate threat before you have a chance to draw your own weapon.

It does you no good to have an impressive repertoire of lightning-fast slashes and stabs worthy of any poorly dubbed martial arts flick if you can’t get to your knife quickly and dependably under stress.

A violent attack is most likely to occur suddenly at contact distances with no advance announcement that it’s about to happen.

“I liked the idea that the course focused on a handful of proven techniques rather than to inundate us with complicated, high-risk moves…”

The Tiga Tactics instructors strongly suggested that we carry our defensive blades in the same place consistently, ideally where you can reach it with either hand. Whether we chose clipped to a pocket, appendix carry, or elsewhere around the waistband, considerable time was given during the weapon certification course to practice getting our knives into action, slowly at first.

Eventually, we were pressed to do it on the clock, faster, to reveal if our carry choices worked. 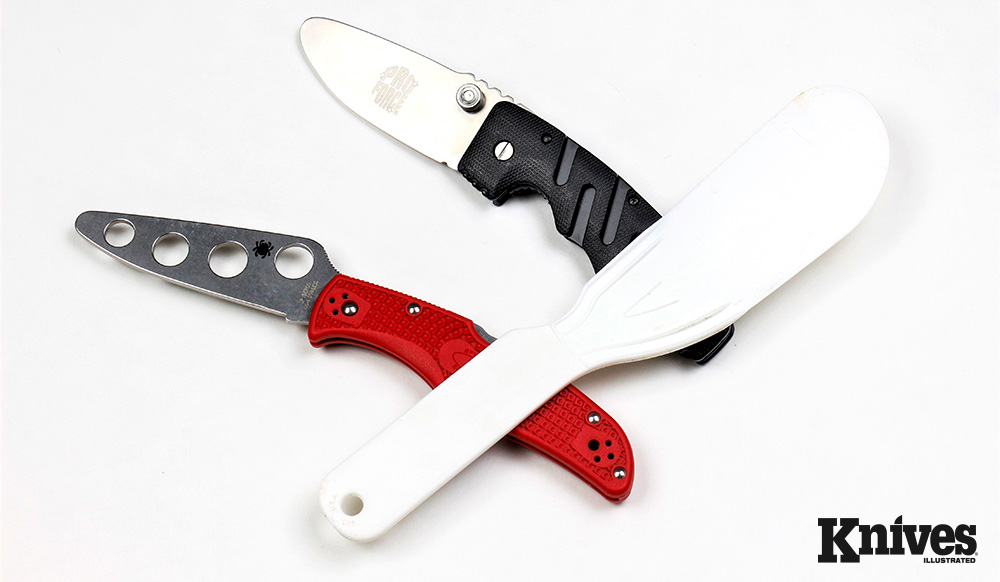 Unsharpened training blades are available for safely practicing edged weapon techniques. You can even improvise a fixed blade trainer by borrowing something from the kitchen.

During the sessions, we also practiced some useful unarmed strikes. Why would we do this in a knife course? The reason is that when you are under attack, you have to deal with the immediate deadly threat.

You can’t go digging in your pocket for your knife while a guy is stabbing you in the neck. You have to create the time and space to deploy your weapon. We practiced palm strikes, eye washes, elbow strikes, knee strikes, and push kicks.

The weapon certification course curriculum built basic skills step by step, eventually getting into stance, footwork, and a handful of useful slashes and stabs. Repetition is the key to becoming proficient and we practiced each technique over and over again.

Eventually we put everything together under the watchful eyes of the instructors, moving from unarmed strikes to deploying our knives to implementing a series of slashed and stabs, all while moving and continuing to breathe. I was sweating pretty good by the end of each session. 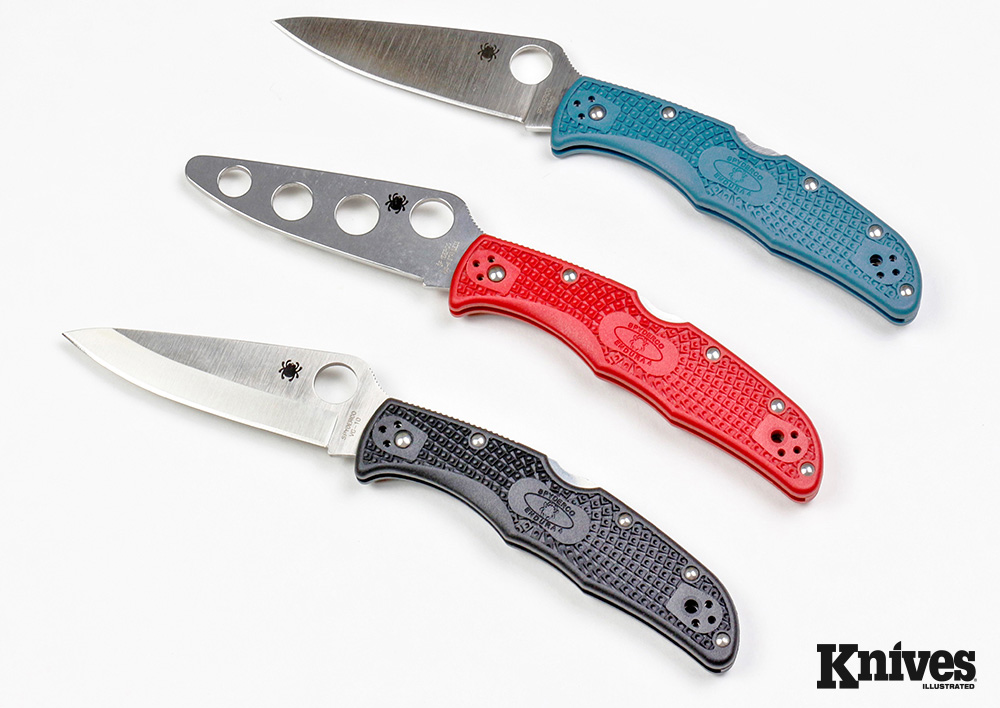 There’s a big advantage in selecting a trainer that’s modeled after the knife you carry. Here a matching Spyderco trainer is flanked by two Spyderco Endura folders.

Yes, as they say, a little knowledge can be dangerous. But you have to start somewhere. I liked the idea that the weapon certification course focused on a handful of proven techniques rather than to inundate us with complicated, high-risk moves that would be disastrous when attempted by those only moderately trained.

While I, thankfully, have never yet used a knife in defense, I have been in numerous scuffles with belligerent suspects during my time as a police officer. I can say that the skills taught here were very much in line with my experiences as a police officer.

As a matter of fact, the technique taught here about striking at your attacker while stepping back to create the opportunity to deploy your knife was exactly what we taught our officers during firearms training in order to be able to draw our pistols. It can save your life. The techniques taught in this weapon certification course will complement, not contradict, defensive skills I was previously taught. A fixed-blade knife has a big advantage over a folder in that there’s no mechanism to fumble when bringing the blade into action. Shown are a TOPS Skinat (left) and a Spyderco Enuff.

It was an eye opener to practice deploying our blades, especially as we were asked eventually to do it faster. I was frustrated at times in not being able to get my knife out smoothly and quickly. It led me to reevaluate my carry choices—both what I carry and where.

Yes, it’s better to find that out now, rather than when I’m bleeding on a sidewalk. It also made me aware that I’ve been neglecting my physical conditioning. There’s always room for improvement in that area, no matter what your age.

The end of the course should be considered the beginning of an ongoing dedication to continual training and education. You can’t say, “There, I’ve taken a course, I’m done.” 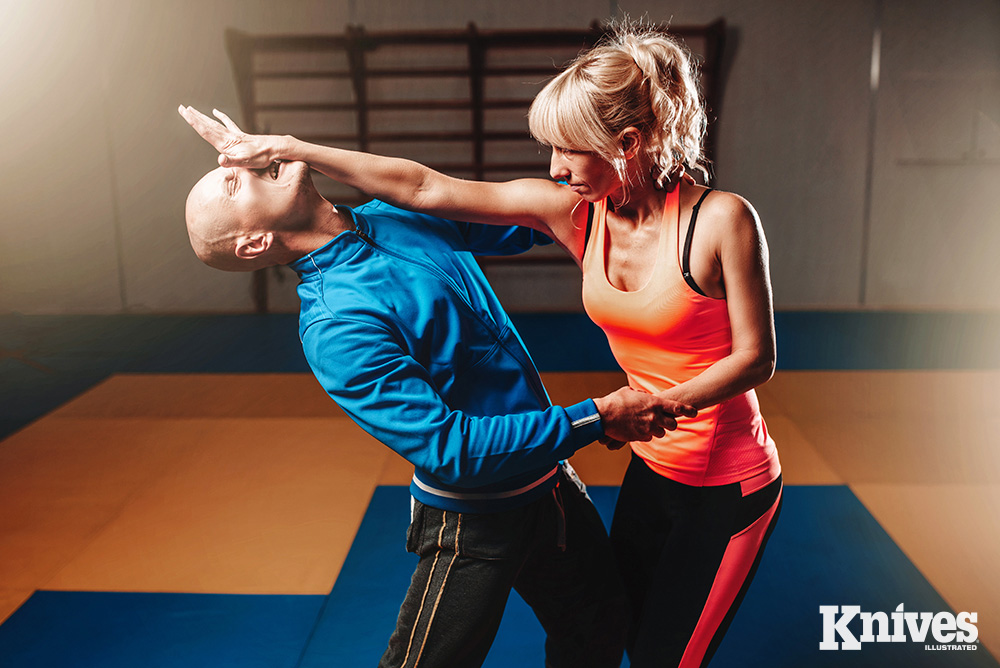 In a fight, there’s a good possibility that you’ll need to use some unarmed techniques, such as a palm strike, before you have a chance to get to your knife. Nomadsoul1/ Dreamstime.com photo

The Tiga Tactics Edged Weapon Certification Course impressed upon me the need to do just that. I think the best way for me to do that is to incorporate it into a regular program of physical conditioning.

Tiga Tactics offers many good courses. So, while these training sessions marked my first participation in one of their courses, it certainly won’t be my last. 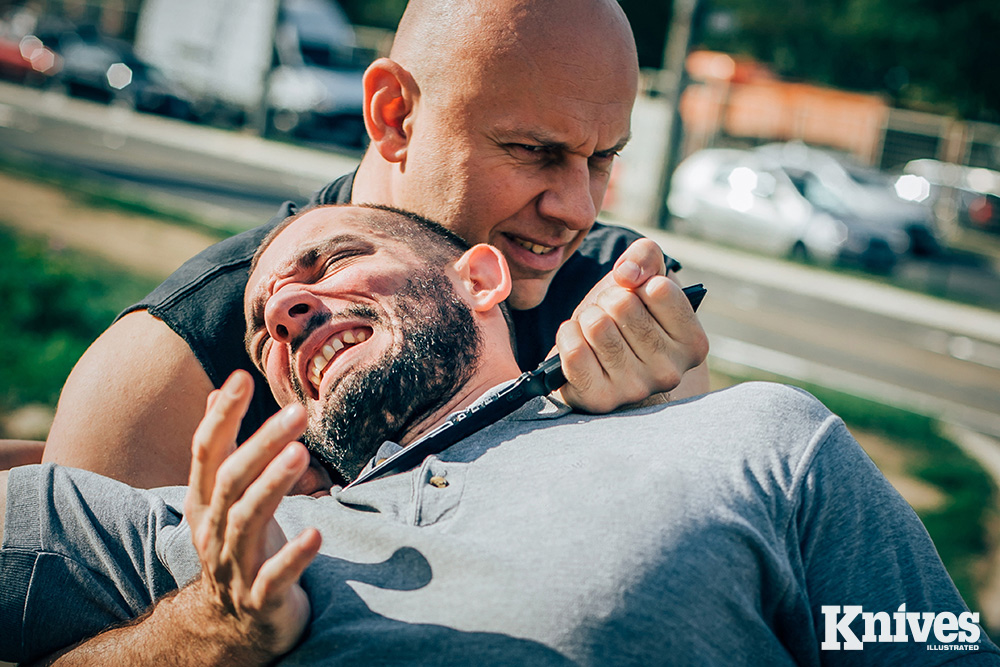 Too late. An attacker can be on you in an instant and all of your best laid plans will be for naught. That’s why it’s critical to be continually aware of your surroundings and be able to spot and avoid trouble whenever possible. Guruxox/ Dreamstime.com photo The eye wash is a good technique to distract or slow down your attacker to enable you to create a chance to deploy your knife. Nomadsoul1/ Dreamstime.com photo Patrick Vuong (right), one of the lead instructors at Tiga Tactics, brings a common-sense, realworld approach to the subject of self-defense. Photo courtesy of Patrick Vuong 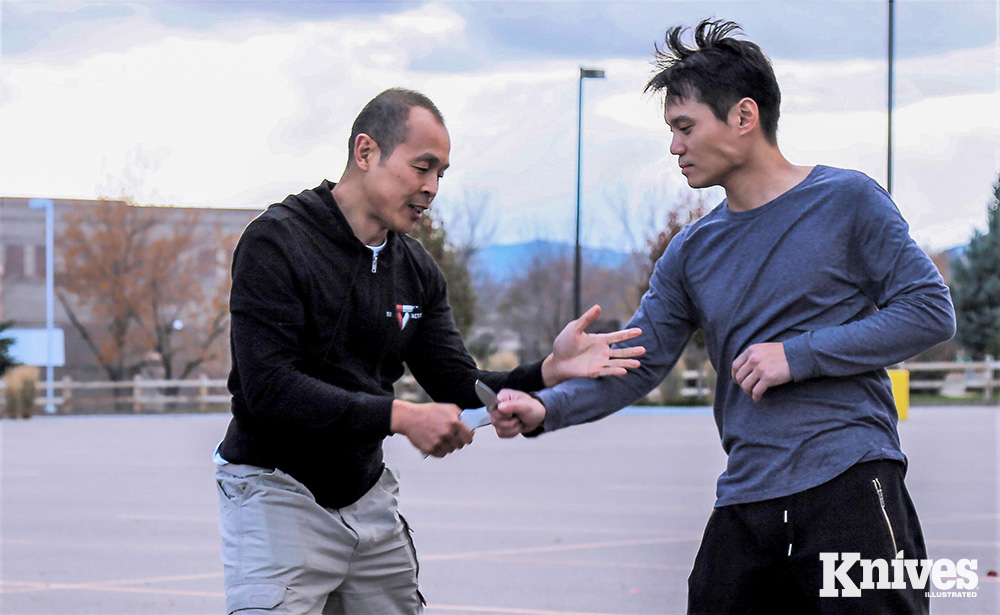 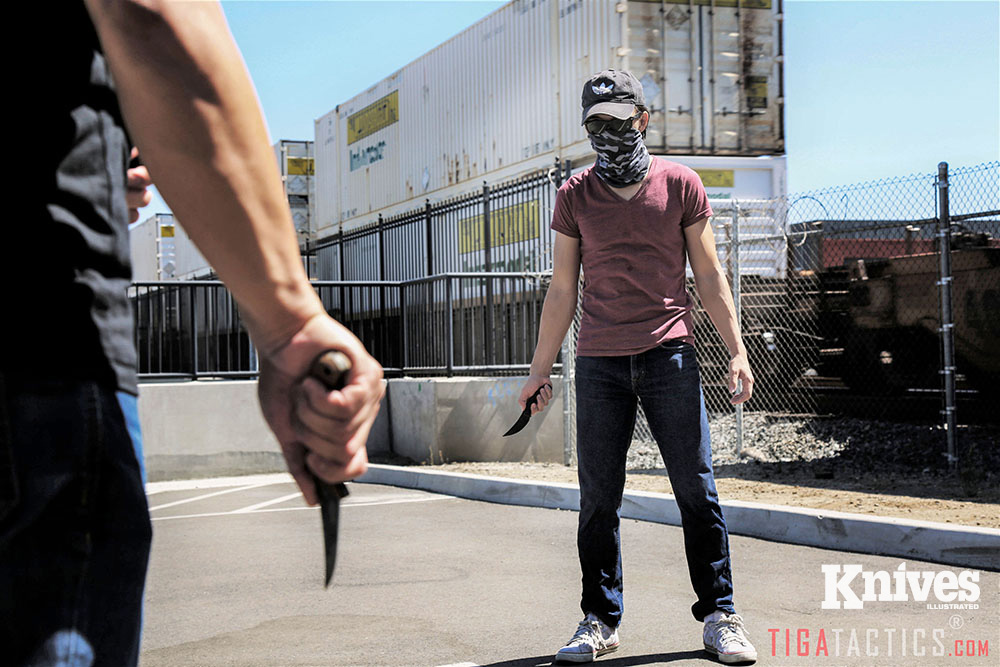 Chances are slim that you’ll have the luxury of seeing a threat at such a great distance. If you do, the better tactical option is usually to retreat. Photo courtesy of Patrick Vuong

He has competed successfully in international combat sports and, before becoming a chiropractor, found a practical application to his multi-discipline art as a bouncer in a bar.

Patrick Voung, Tiga Tactics’ chief executive officer, has been a self-defense instructor since 1999. His experience ranges from combat sports to traditional martial arts to reality-based self-defense and tactical firearms training.