A Look at Cold Steel Knives

It only takes a moment to know that this man means business. He’s barrel-chested and powerfully built, and all 5 feet, 9 inches of him convey determination and direct purpose. If his mere physical presence wasn’t daunting enough, there are the knives, one in each hand, the glint off of their shiny steel blades flashing a warning that at any instant they can be unleashed in a hailstorm of misery and death.

Confronted by such a man in a dark alley or lonely parking lot would possibly trigger a fight-or-flight response. But this man is one of the good guys. In an emergency situation, he is one person you’d want on your side. He is Lynn C. Thompson, president and founder of Cold Steel, Inc., a California-based business that is one of the premier manufacturers of edged weapons in the world. 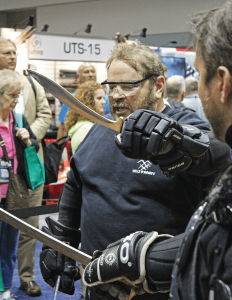 Choose your weapons. Lynn Thompson selects a kukri for a sparring exhibition at this year’s NRA Annual Meetings in Indianapolis.

Thompson is also an expert hunter and marksman with both conventional firearms and primitive weapons. He is a recognized Master at Arms, a lifelong student of several martial arts disciplines and an expert in fighting techniques, especially involving anything with a blade. Knife, tomahawk, machete, sword, you name it; Thompson can use it to slice you and dice you with the speed of the best food processor available on the market.

Thompson got into the knife business after he broke a knife from another manufacturer while training.

“I went in the house and got another one and broke it too,” he said. “I was so disgusted, I decided to make my own knives. That was the catalyst for Cold Steel.”

Thompson started Cold Steel in 1980 and built the company around his now-famous series of tanto blade fighting knives and large Bowie designs, such as his Trail Master. He boldly marketed his knives as being intended primarily as weapons and that made the rest of the knife industry uncomfortable.

“We’ve always been a warrior company,” Thompson said. “We were tactical when tactical wasn’t cool. And now you see all of my competitors have opened tactical divisions. These are the same people that criticized me in the 1980s and ‘90s for being too aggressive and too fighting-oriented, and now they’re all making fighting knives.”

What makes a good survival knife?

“When you think about a survival knife,” said Thompson, “the first thing you think about is, is this your only knife? If it’s your only knife, you can’t break it. That’s the most important thing. I think it needs to have enough blade length and weight to be able to help you to cut down saplings or at least cut into them so you can break them off to build a shelter. It should be long enough to be able to stab something or somebody with and kill him.”

Thompson firmly believes a survival knife has to be able to serve as a weapon. As an example, he used the movie The Grey, where survivors of a plane crash are forced to fight off a pack of wolves. “You’ll never watch that movie again and not think you’d want to have a big, bad knife in your suitcase, especially when flying over a forest. Even though it was fiction and you know it probably wouldn’t happen in a million years, it was very primal. I think your survival knife has to double as a fighting knife.” 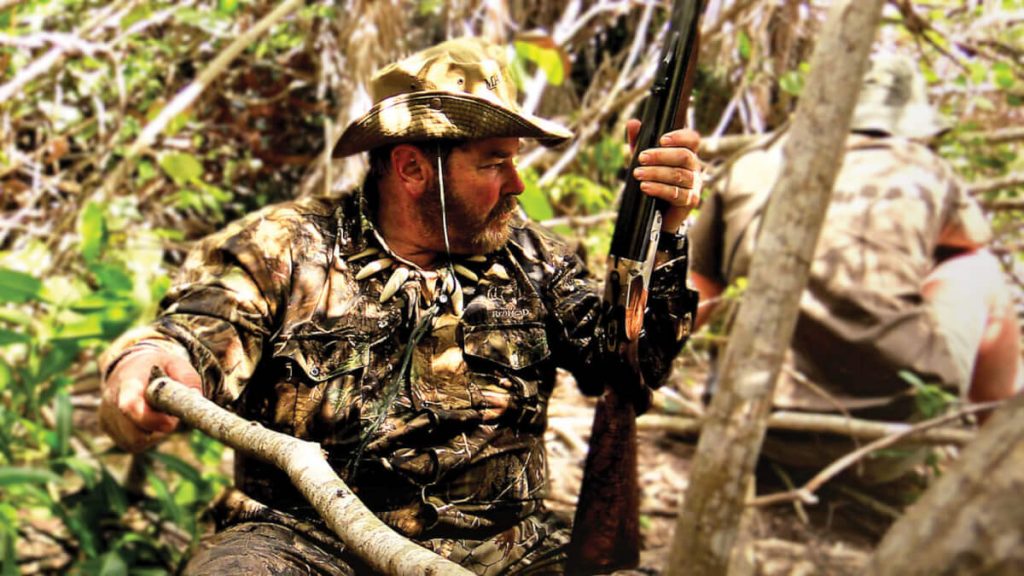 Ready for anything. Lynn Thompson believes in a multidiscipline approach to self-defense and is ready to fight hand-to-hand, with firearms and edged weapons.

“I’m always bemused by people who want to hammer on the back of their blades,” he said. “You don’t risk batoning with your survival knife. The chance of breaking your survival knife negates any benefit of batoning you could possibly have. You can cut a wedge to use to split things. You can carve around a sapling and snap it off or you can burn through it. There are lots of ways besides batoning. I’ve never agreed with that. I think it’s stupid, unless you have multiple knives.”

As far as blade configuration, Thompson said he recommends a clip point blade rather than a drop point preferred by others. “A drop point doesn’t stab as well and it doesn’t do finesse as well,” he said. “Your blade gets narrower at the tip with a clip point so you can do more finesse work. It is a slightly weaker point than a drop point, but with a lot of the drop points I see on survival knives, you have to put too much pressure to stab anybody with it. And a lot of people aren’t interested in that. They don’t think you’re ever going to have to stab anybody. But I make everything as a weapon first and as a tool second because there’s no higher standard than as a weapon.

Thompson also prefers a survival knife with a double guard to protect his hands. “A large knife can be pressed into a smaller knife’s role. But small knives, not visa versa. “There are so many scenarios where you might need to lay down fire, that I can’t deny the superiority of the semiautomatic.” 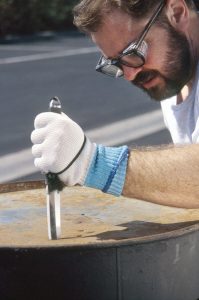 Thompson says that what separates Cold Steel from the competition is that he’s willing to put his knives through extreme, abusive torture tests. He has showcased the results first through his “Solid Proof” DVD and now his “Apocalypse Proof” DVD that accompanies each Cold Steel catalog.

The company has produced numerous instructional DVDs, many featuring Thompson, covering edged-weapon techniques. In this six-DVD set, Never Unarmed, Thompson takes you through the hunting and self-defense capabilities and limitations of every type of firearm, from pocket pistols to the largest double rifles. Thompson believes in a multi-discipline approach to self-defense.

So what would he suggest to a person who’s just getting started? “I’d send him to a Filipino martial arts school,” he said. “If I had kids, I would start my kids boxing and wrestling. I would start them out on Brazilian Jiu-Jitsu or shoot fighting, which came out of professional wrestling in Japan.”

Editor’s note: A version of this article first appeared in the August 2014 print issue of American Survival Guide.