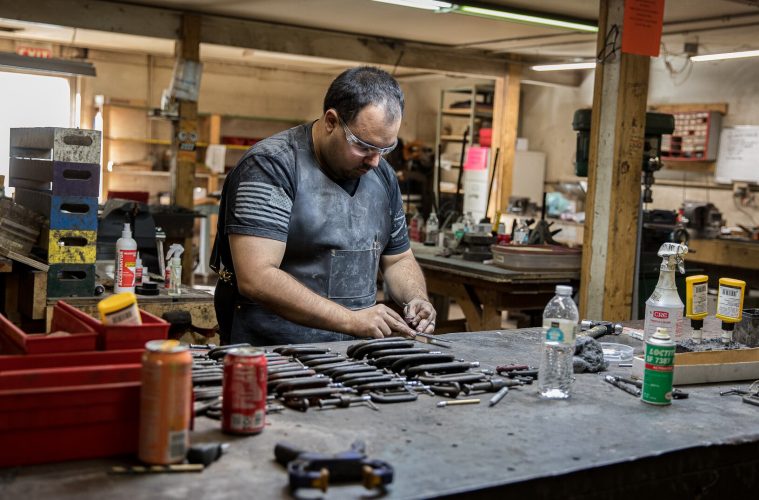 It is fair to say that Alex Harrison of Night Watch Knives is considerably more talented than he has any right to be at this stage of his career. I’ve mentioned elsewhere that I wouldn’t be at all surprised if there were a deal with a crossroads demon somewhere in his recent past.

Consider the fact that he’s only been making knives for about six years, starting entirely from the beginning in 2016, and that he’s already become an in-demand custom maker. He’s at that interesting stage of his career where he’s becoming a recognizable name in the industry, and you can still find some of his production models fairly easily. But I’d bet that within a year or two, drops at distributors won’t last more than a few minutes before they’re sold out.

While he’s now a detective in the Sheriff’s Department, back in 2016 he was still on patrol duty. One day, he was stuck in the booking area of the local county jail, waiting for them to process an arrest he’d made. The supervisor there had “Forged in Fire” playing on the television. Alex had never seen the show before, but he was quickly hooked on the idea of making knives.

His original motivation was knowing that a purpose-built field knife for a uniformed law enforcement officer was too expensive of a proposition for many who would truly need one. Alex is quick to say that he’s not landed on the perfect design yet, and he continues striving for it. During our conversation, he said that this informs many of his design decisions. To that end, as he’s sketching out a drawing of a new model, then grinding into shape, he’ll ask questions like: 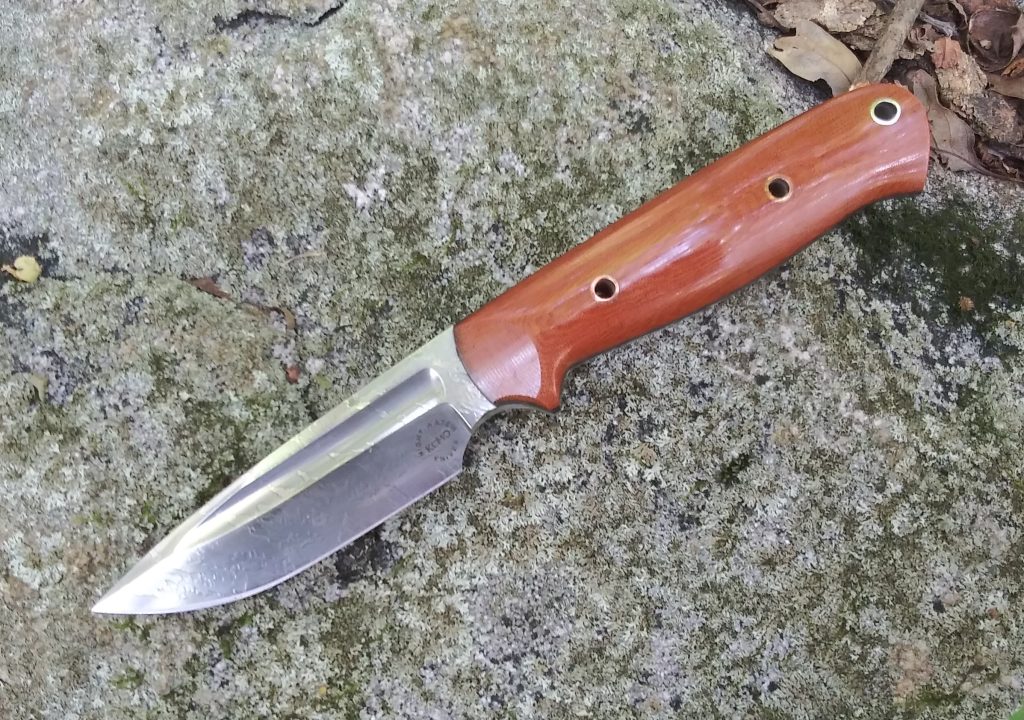 The Ajax is one of Night Watch Knives’ signature models. Author photo.

Today, Alex has about a half-dozen models he makes regularly, and about 50 designs total hanging on his shop wall, from a tiny, pocket-sized EDC to a full-size field knife.

I asked Alex about other makers who inspire him or who have helped him hone his craft. He replied with a few names. “Matt and Jenna Martin (Vehement Knives) invited me to their shop and their home for no good reason and the wisdom I’ve taken from their operation is invaluable. In my opinion, he’s the best knifemaker currently living and I’ll die on that hill.”

He credited John Roy at Dawson Knives as the first person who took him under his wing and share his expertise. “This is back when I was peddling insultingly bad scraps of sharp-ish steel at local gun shows. I’ll always be grateful to him for his patience.”

Jim Stewart with Bark River Knives and Jim Skelton of Skelton Bladeworks round out the group. “I can ask a detailed technical question of either of them at three in the morning on a weekday and get a three-page step-by-step from them on the spot. They’re both totally selfless dudes on top of being truly elite craftsmen and I’m privileged to know them.”

Alex said that he has three objectives with each new knife design:

He tends to lean heavily toward smaller knives, ones that you can easily carry all day long and that will serve a variety of uses.

The blade finish you see on this Dead Lesson is called War Wash. Alex Harrison photo.

Given some time and experience, most knifemakers come to favor certain types of steel and other materials they use to make their knives. “With respect to steel, I overwhelmingly favor the use of AEB-L,” Alex said. “I’ve never had a problem getting it, and I love how well it finishes. Compared to other blade materials I’ve worked with, I’ve found it to be a generally very cooperative steel, and its performance really is exceptional, assuming you don’t cut any corners on the heat treatment and cryogenic treatment.” 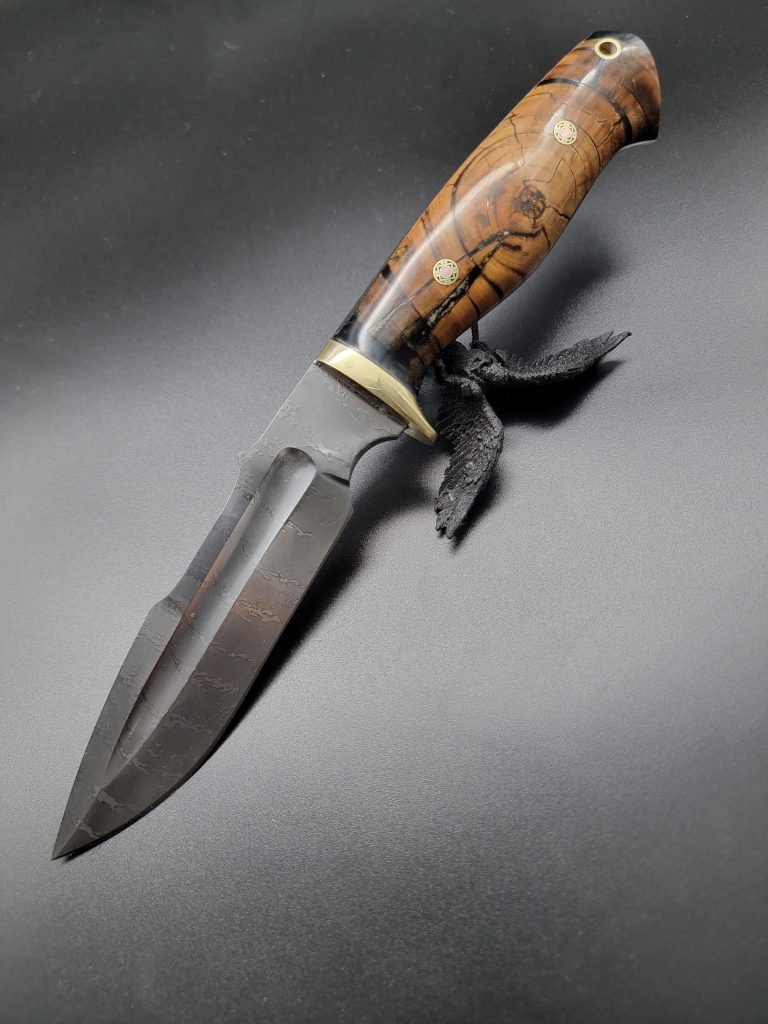 Check out the beautiful scales on this Zaul. Alex Harrison photo.

For handle scales, he’s a big fan of Micarta and other synthetics. “Making a knife handle out of Micarta is almost like cheating. It grinds uniformly, polishes beautifully, isn’t affected by ambient temperature or humidity, and it’s borderline indestructible.” That said, he has a soft spot for ultra-stable oily hardwoods like Honduran Rosewood Burl. “I’m also a big fan of stag or jigged bone, but I have to evaluate that choice on a knife-by-knife basis, depending on the pattern and what material I’m able to lay my hands on at the moment. Generally speaking, I won’t buy natural materials unless I can see them in person, so those choices are carefully made.”

Alex said that Night Watch Knives is in the middle of a transitional period at the moment. “I will always continue to take and fill custom orders, and incidentally my books are open now. That being said, my goal is to be able to produce small batches of base models on a regular basis and make them available via our primary dealer, DLT Trading.”

In other words, low-volume, high-quality production is the plan. If you want a custom Patrol Scalpel or some other model, tricked out with all the bells and whistles, he can certainly accommodate. On the other hand, if you’re looking for a daily user, something with simple black Micarta scales and built to be beaten like a rented mule, get in on a drop when they happen.

He’s happy to work with clients who might have a specific design in mind, as well as those who have a vague idea but need an experienced maker who can help forge that idea into a workable design. “Other than that? No gut hooks, no serrations, no American tantos.” 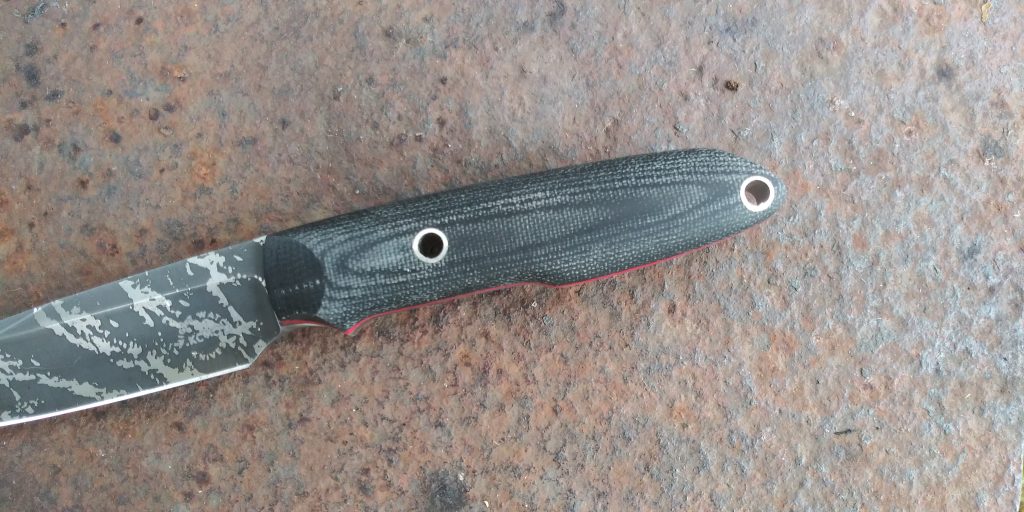 This sort of two-finger choil handle profile is a Night Watch Knives calling card. It is actually very comfortable and really locks the handle into the grip. Author photo.

Like many popular makers, Alex Harrison has his own private Facebook group. The Night Shift is where he showcases designs new and old. He also sells off prototypes and one-offs at discounted prices. As a general rule of thumb, he sells at least one knife a month in this group. It is also a great place to meet fellow fans of Night Watch Knives and get to know other makers. You can find it by searching Night Watch Knives – The Night Shift on Facebook.