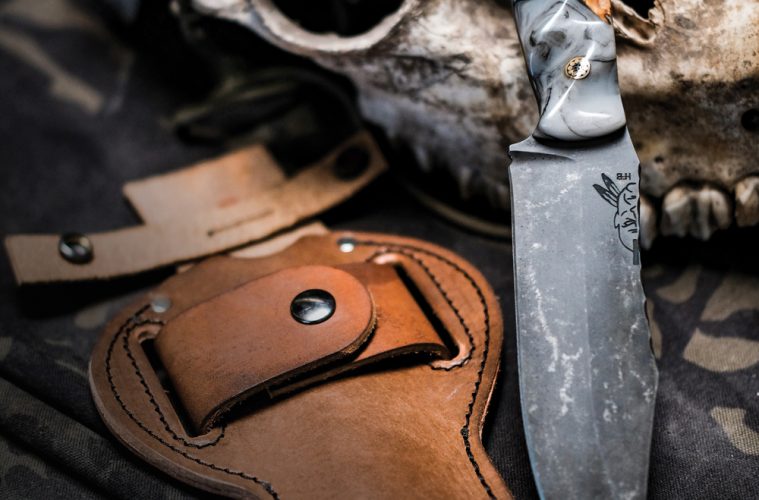 Meet the Maker: Andrew Arrabito of Half Face Blades

He fought for his country. Every time Andrew Arrabito laced up his boots as a Navy SEAL, he put his life on the line. For you. And for me. He knows challenges and he knows adversity, but he also knows the value of teamwork.

Today, Arrabito is the owner of Half Face Blades, a growing knife company based near Oceanside, California. In the following Q&A, Arrabito opens up on the competitive knife industry, trends and more.

Knives Illustrated: It’s a competitive world, regardless of what occupation we’re talking about. Describe your impression of the knife industry, as owner of Half Face Blades, a young, growing company.

Andrew Arrabito: I honestly don’t get too involved in the knife industry. I have talked with a lot of other bladesmiths, and they have been great; however, I attended a knifemaker get-together recently, and I felt out of place. I walked around and talked to a few people, and it was interesting to say the least.

Had I not known what goes into making a blade, then I’d be none the wiser, but I saw some knives that featured cheaper steel and simple handles that guys were selling for more than $700. I was a little blown away.

There were a couple guys selling skinning knives, and I asked if they personally skinned animals. They said no. I asked the guys selling chef knives if they cooked or had buddies that were chefs. They kind of shrugged and said, “No, not really.” I saw beautiful blades that were too large to use and swords that you can put on a shelf.

I chatted with a few people who were very into the metallurgy of the knife steel and some who were into the newest types of steel coming out. Some were into the different finishes and coatings. It was odd to me because I didn’t find very many who were into a purpose-driven blade. It dawned on me that a lot of the blades weren’t made for a specific job.

I came from the end-user side and am now learning blade-smithing. I realize there are lots of knifemakers who love blades, but there does not appear to be as many who actually use them for a purpose or who used them growing up or in their daily lives for work. 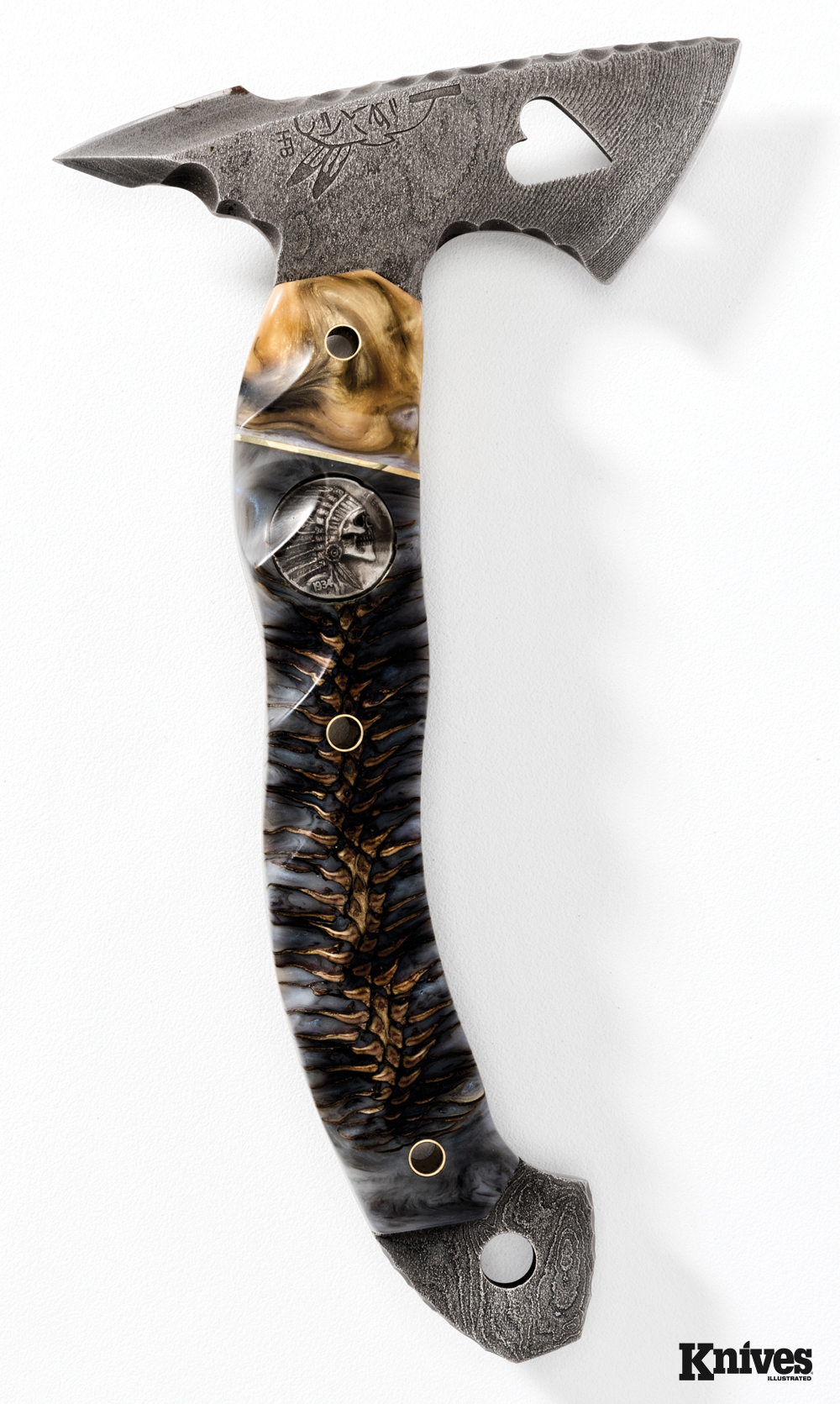 By personalizing their blades, Arrabito says the customer feels connected to the product.

KI: What role did knives play for you when you were growing up?

AA: I have used knives my whole life … for skinning, cooking, outdoor living and in combat. I feel blessed to be an end user. I started making blades for fun because I wanted to make perfect blades for my SEAL buddies. I also personalize the knives for them.

KI: What strategies do you employ to stay ahead of the competition?

AA: I still work with the SEAL Teams and other groups so I can get information on what guys are using and carrying in their fields. In great work environments, I have friends who feed me information and who use the blades to provide feedback to me. I take a blade and redesign it according to that feedback.

Overall, I like to just do my own thing, so I do not pay attention to competition very much. I am a novice and learning; I feel I have a long way to go.

KI: As an outdoorsman and retired SEAL, how does your background lend itself to success in the knife industry?

AA: Greatly. I grew up in the woods. I have brothers into wilderness survival. I am into skinning animals. I have traveled all over the world from places like Alaska to the jungles.

I have also used blades in the SEALs, and I have been cooking for years. It has been great using different knives and tools in all sorts of environments. The real-world experience enables me to see what is demanded of the knives in different situations. 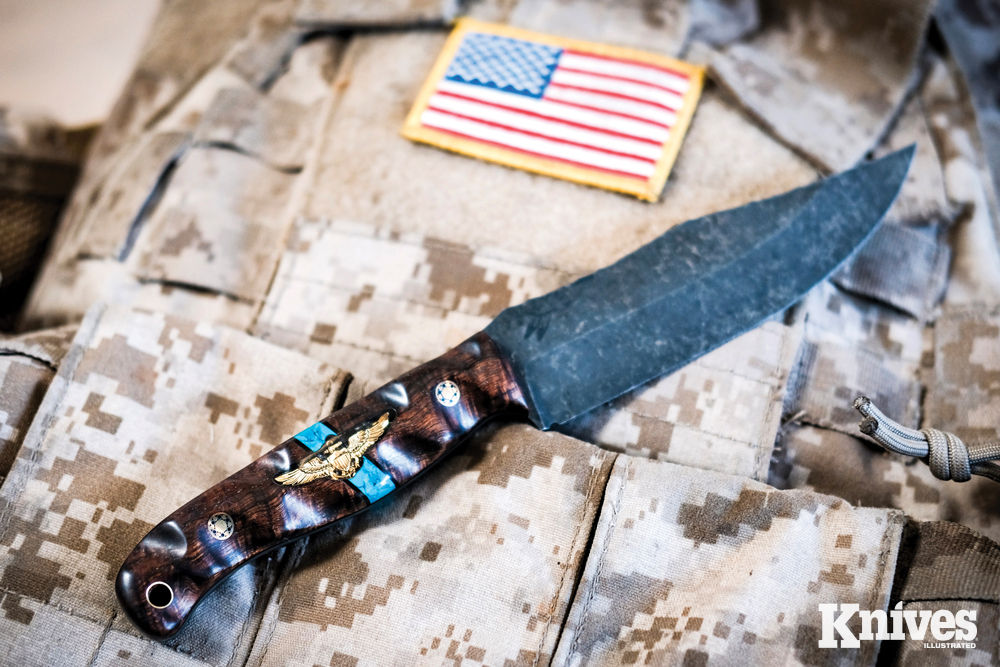 Arrabito says he tries to stay focused on the usability of the knife for the customers versus going with a trend.

AA: It’s a blade that easily fits on your person or gear, and it can be used in a fast-deployment scenario, which means it can cause the most damage to a person or be used in an emergency situation.

KI: Give us an idea of how you stay on the cutting edge of trends.

AA: I’m not sure what the trends are, to be honest. At the event I attended, I did see people rally into these tiny knives. Although they are cool looking, the tiny little chopper that looks like a meat cleaver, to me, doesn’t have much use.

You have no tip for puncturing, the blade edge is so small you get little cutting edge and it’s tiny, so while chopping you don’t have [much] weight behind it.

I really stay focused on the usability for the customers versus a trend where it sells but it’s of little use in the individual’s field.

KI: In the world of sports, today’s athletes are stronger, faster and quicker than those from yesteryear. That change illustrates how industries evolve. Similarly, will the knife industry evolve? Is it possible that knives will be different 10 years from now?

AA: Well, if you think about it, knives have stayed fairly the same through time. Knives are very purpose driven. Chefs like specific sizes and heights of blades so that can’t change too much.

Combat blades, of course, have gotten smaller, and the need for lethality and streamlining the blade are keys. I think the materials can just get lighter and stronger so that would be some change.

“I like to just do my own thing, so I do not pay attention to competition very much.” — Andrew Arrabito 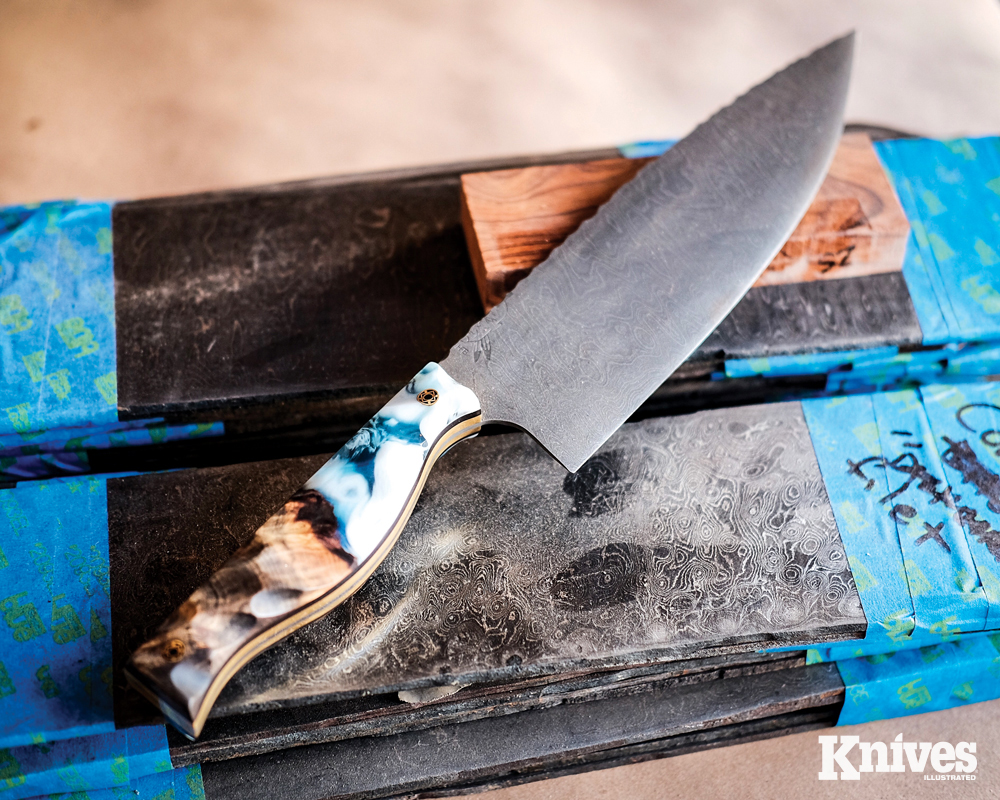 The retired SEAL says that each knife is “embodied with a warrior’s spirit.”

KI: In regard to the industry, what else comes to mind?

AA: It’s cool to see a bit more of a focus on the craft, and I have also enjoyed seeing the art of forging. This really shows how much hard work goes into a product that you use every day and don’t even think about.

I really love bringing new ideas and designs to people who use the blades. Personalizing the blades really makes the customer feel connected to the product.

The goal at Half Face Blades is to make simple blade designs for consumers who demand the finest products. With Arrabito’s real-world experience in using cutting devices in super-charged action, he understands what will be demanded from his blades. And he makes them to meet those demands. Half Face Blades knives are designed with the distinction and ruggedness required for the work they are intended to do.

Editor’s note: A version of this article first appeared in the March/April 2017 print issue of Knives Illustrated.