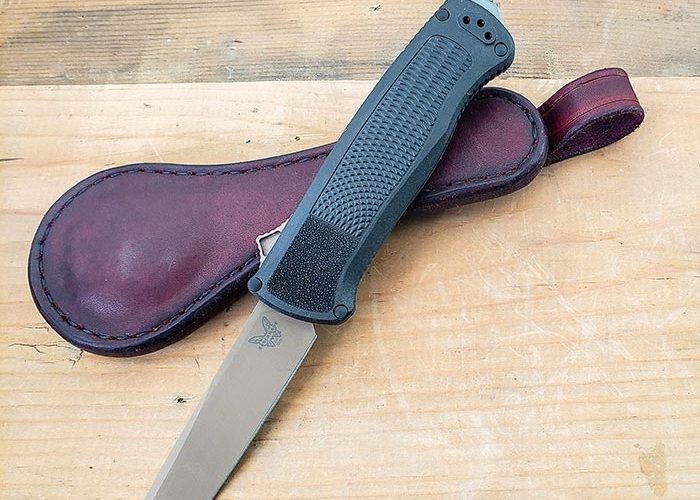 Although multitudes of quick one-hand opening systems are available these days, none seems to beat the out-the-front (OTF) automatic for speed and simplicity of motion.

OTFs are also really fun, especially a double-action (DA) auto like the new 5370FE Shootout from Benchmade. Benchmade has made a lot of OTF autos over the years, such as its extremely popular Infidel line, but the Shootout is in a class of its own. Let’s take a look at the specs and I’ll explain why. 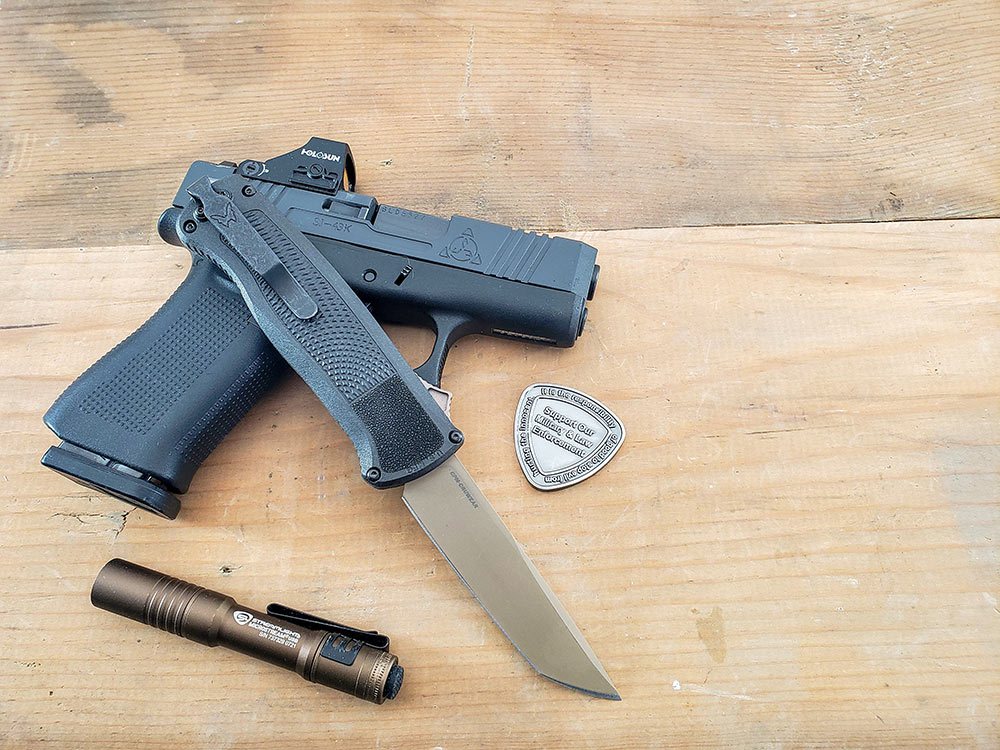 The Benchmade Shootout is a fast, effective EDC tool that doesn’t add weight or bulk to your daily carry.

The Shootout has a 3.51-inch blade of CPM Cru-Wear steel with an impressive 63-65 Rockwell hardness. The blade is a tanto style with a Flat Earth PVD coating. The factory edge is excellent and what you’d expect from Benchmade.

The handle is extremely lightweight and flat in profile. It’s made from CF-Elite, a carbon fiber-filled nylon that provides strength and rigidity but without the weight of a metal frame. 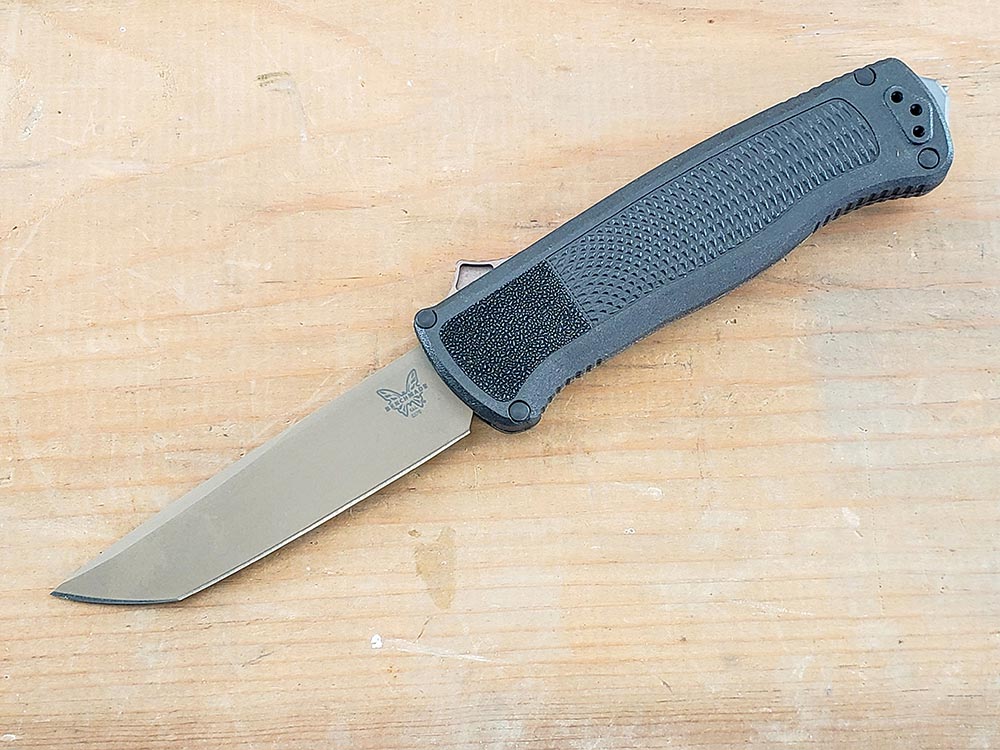 The Shootout has simple, clean lines that are all function. At just 8.22 inches long it is a full-sized tactical knife. Its 3.51-inch tanto blade is made from CPM Cru-Wear stainless steel and has a Flat Earth PVD coating.

The Shootout has a very ergonomic grip that allows for easy indexing of the blade. Serrations are on the top and bottom of the handle, and checkered panels are on the sides.

A rougher patch similar to skateboard tape is on either side of the handle positioned for either your thumb or thumb and index finger depending on your grip. The pommel of the Shootout is capped with a carbide glass breaker and a deep-carry pocket allows for either right- or left-hand, tip-down carry.

The overall length of the Shootout open is 8.22 inches, and Benchmade lists its weight at 2.8 ounces. My scale came in a touch less showing 2.7 ounces.

The Shootout is made in the USA and carries an MSRP of $300.

“…the CPM Cru-Wear steel held its edge throughout testing. Honestly, even with a month or so of EDC use…I can’t tell the difference from when I first got the knife.” 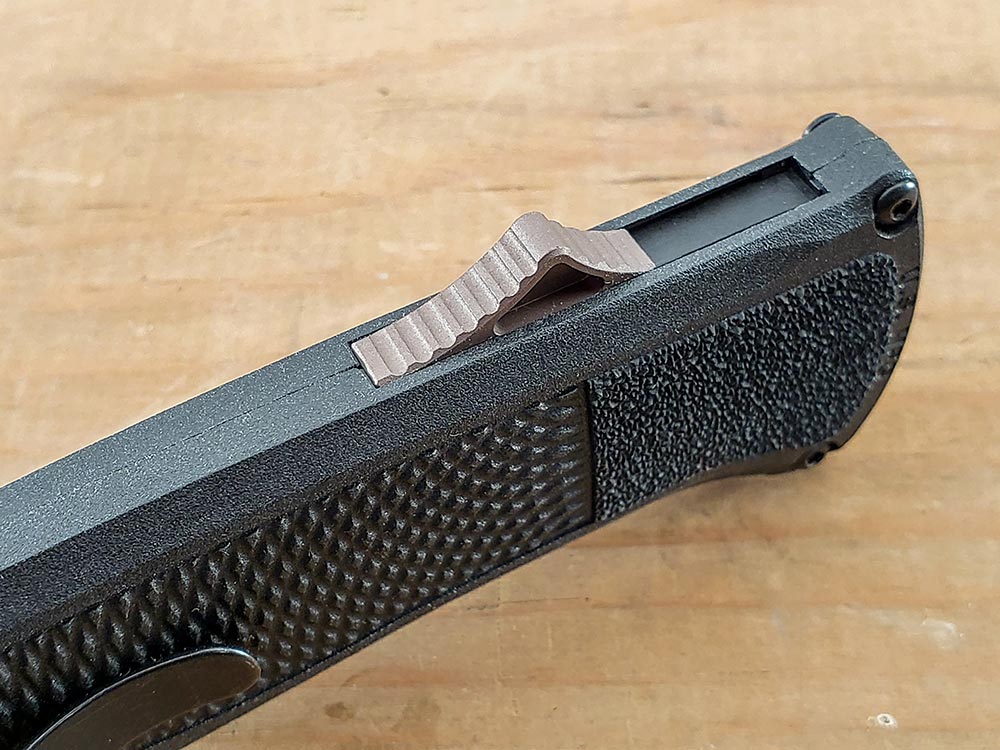 The Shootout uses a sliding button to actuate opening and closing the blade. 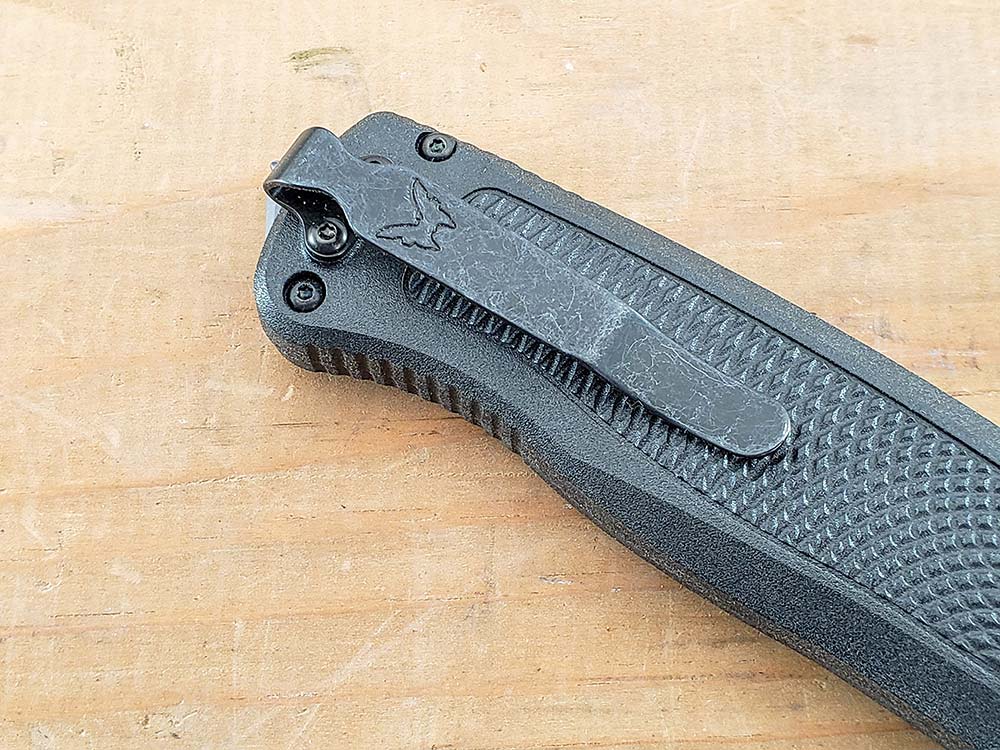 The Shootout has a deep-carry pocket clip that allows for either right- or left- handed tip-up carry.

I received my Shootout just prior to having shoulder surgery. I had a total replacement on my left shoulder and spent my summer with my arm in a sling. Being largely relegated to doing things one-handed, the Shootout proved to be a perfect fit for my EDC needs.

I know I mentioned the weight already, but it’s one of those things that really hits you when you first pick up the knife. It’s light, but it feels good in the hand.

Everything with the Shootout is well-executed and it doesn’t feel cheap like some polymer-handled knives can. It locks into the hand nicely with your fingers naturally grasping the handle along its contours. 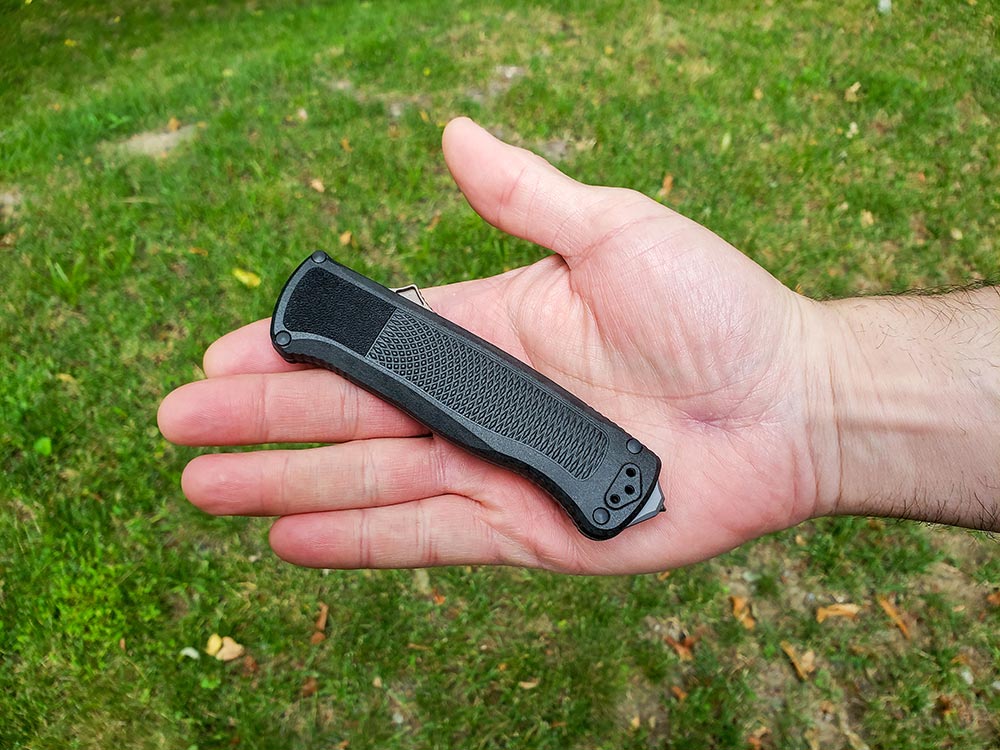 At 4.71 inches closed, the Shootout makes for a compact EDC blade and at less than 3 ounces in weight, it’s almost as if you aren’t even holding a knife. 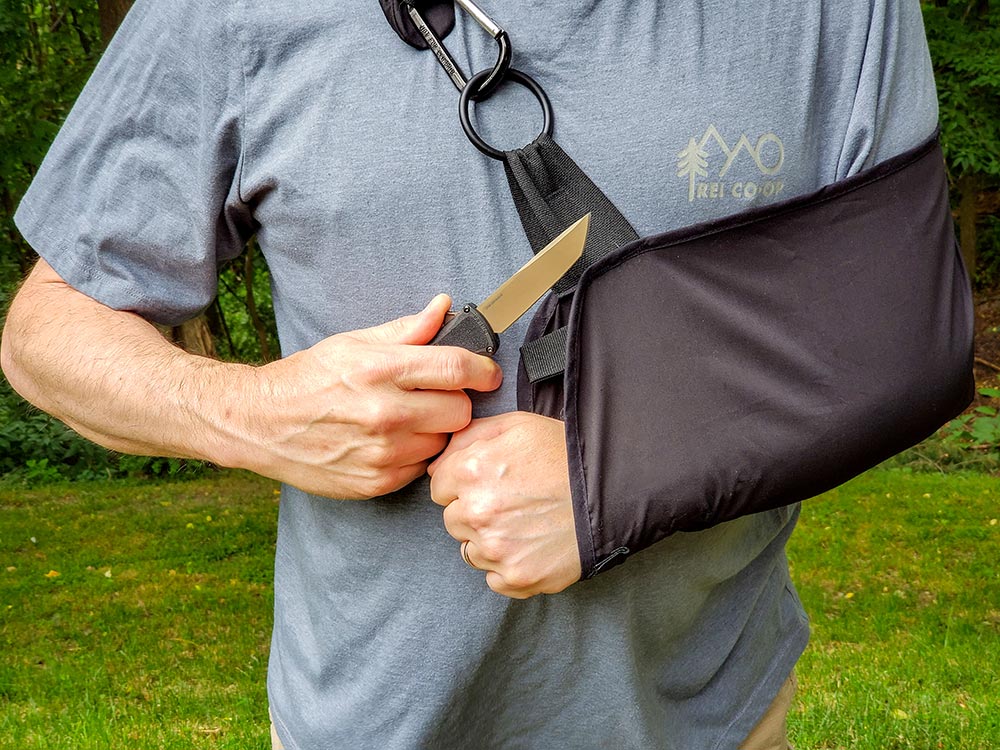 The author made good use out of the Shootout OTF auto while his arm was in a sling. The Shootout is extremely comfortable in the hand. The handle shape allows for easy indexing even at night.

Aside from the glass breaker, everything else on the handle is smoothed or rounded with no sharp edges present to cause discomfort during use or to abrade your clothing when you’re carrying it.

The pocket clip has just the right amount of tension. You can slip it easily over the lip of your clothing, and it holds the knife securely in place but is still easy to draw.

Being in the sling and off work, I spent most of my time in t-shirts and basketball shorts. The Shootout was light enough that I could just clip it inside the waistband of my shorts with no belt. Alternately I’d clip it to my sling and have it ready at hand.

The sliding activation button was easy to use. It needs some pressure to operate, but nothing insurmountable for the average user. I never worried about it not having a safety and didn’t have any issues no matter where I carried it.

The action was quite positive, and the blade opened and closed with authority. The only time I had the blade fail to open fully and lock was when I deliberately placed something in the way of the blade and then hit the button. 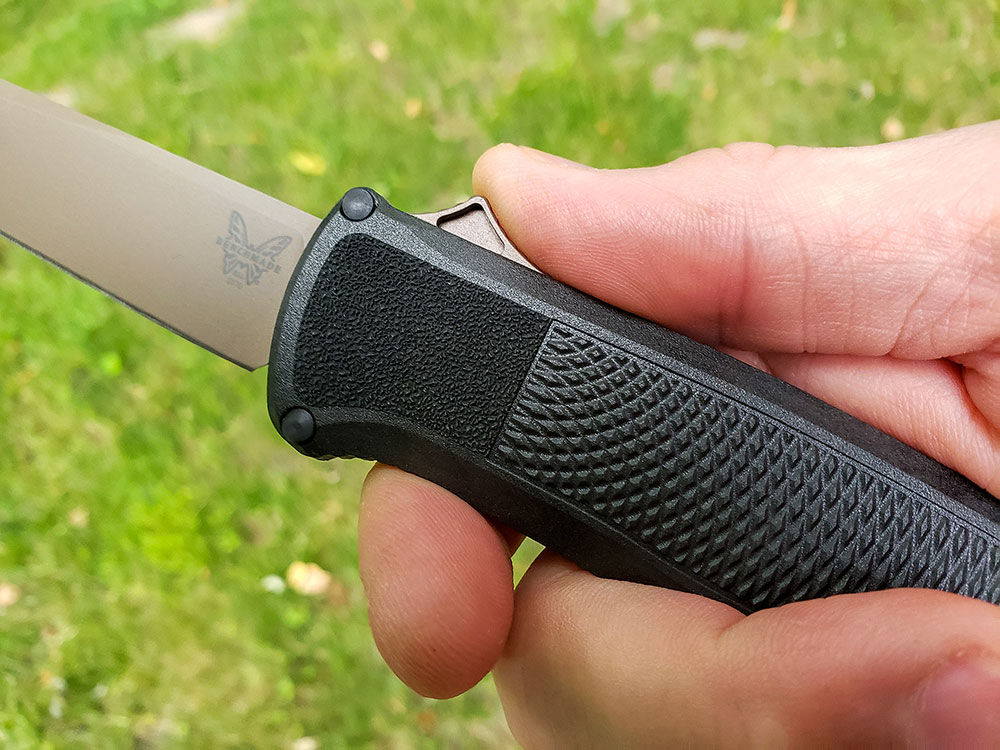 The Shootout’s double-action sliding button is easily activated with the thumb of either hand. A rougher patch textured like skateboard tape can be found on either side of the handle to enhance user grip. 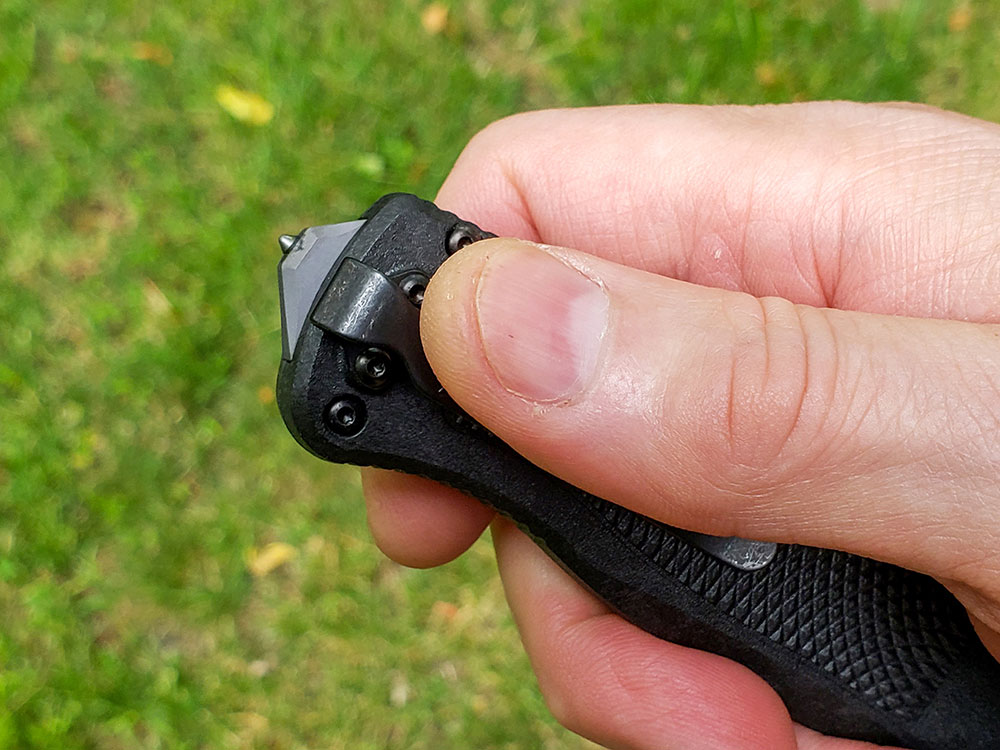 A carbide glass breaker is affixed to the pommel of the Shootout.

To reset the blade, I just pulled it fully open and locked it in place. It would continue to operate normally after that. That’s normal for OTF autos. It’s a safety feature, even though I think we all secretly want an OTF that will punch through a target when we hit the button. What can I say? I assume lawyers keep that from happening.

The PVD blade coating seems quite durable, and the CPM Cru-Wear steel held its edge throughout testing. Honestly, even with a month or so of EDC use on cardboard, plastic packaging, cordage, and random food items, I can’t tell the difference from when I first got the knife. I don’t expect to have to sharpen it very often. The deep-carry pocket clip held the Shootout securely and discretely in place. 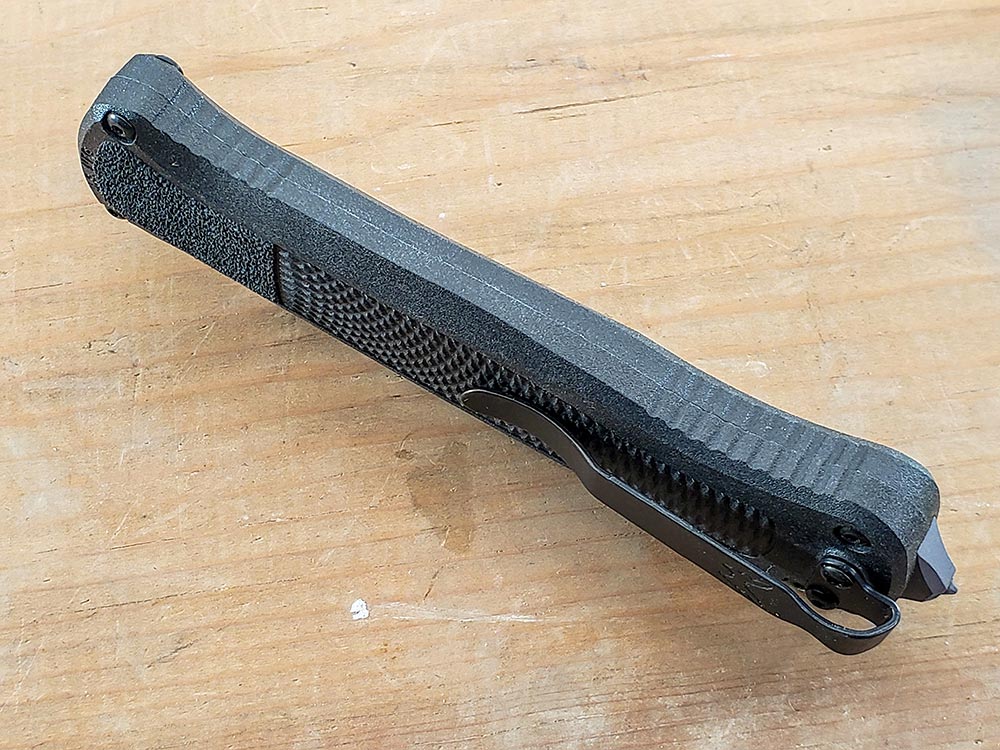 The Shootout is only 0.51-inch thick but has well-contoured handles with serrations on the top and bottom.

The spring seems quite strong as well. I spent a lot of time just opening and closing the knife, using it like a high-end fidget spinner, which is not annoying to other folks in the house at all. OK, maybe it is, but it’s still fun.

Despite hundreds of opening and closing cycles, there was no noticeable deterioration in performance. Heck, if anything I probably smoothed the action out a little.

The Benchmade Shootout is well-built, lightweight, discreet to carry, and fast to get into play. It’s a lot of fun. Also, it’s a great choice for first responders because it carries flat and adds negligible weight or bulk to the load you’re already carrying. It’s easy to use with a support hand as it’s a true ambidextrous platform.

Whether you want a fast, easy-to-use backup, or need a tool that you can operate with one hand, the Shootout has an awful lot to offer.

“Despite hundreds of opening and closing cycles, there was no noticeable deterioration in performance.” 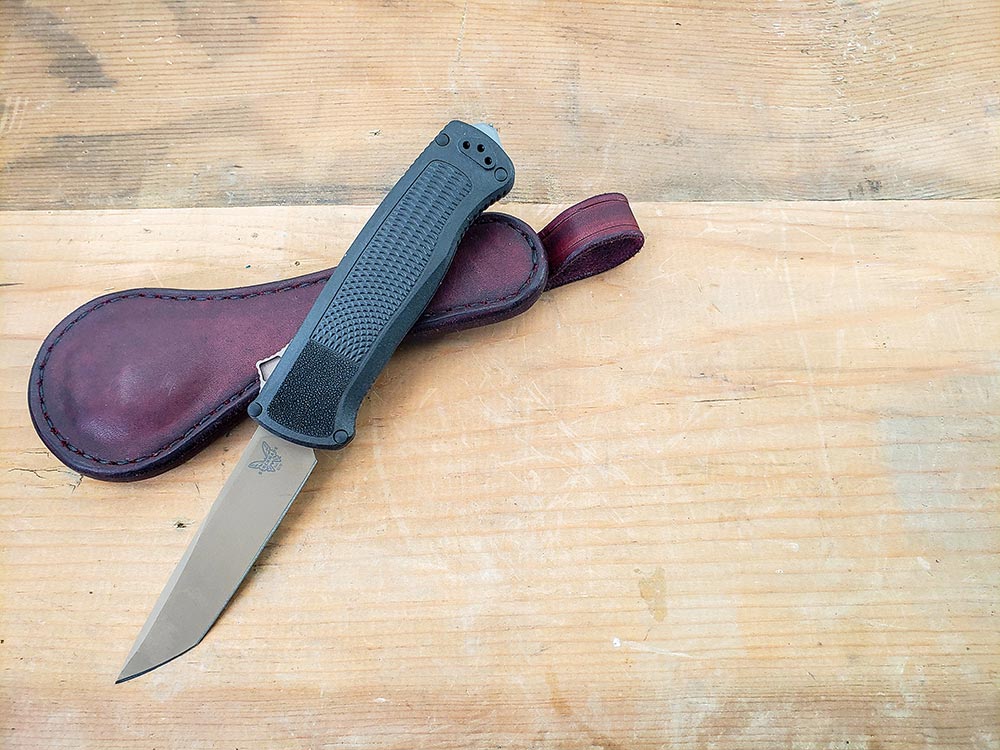 The Benchmade Shootout is a great EDC tool on its own or paired up with any number of other defensive tools.

HOW THE SHOOTOUT OPERATES

Let’s start with the basic operating premise of the Shootout. With a double-action (DA) auto, you just press forward on the activation button and the blade shoots straight out of the handle.

Pull back on it and the blade retracts. Side opening automatics will open the blade automatically, but you still need to unlock them and close them against the tension of the opening spring manually.

The DA auto eliminates some steps from that process and makes it very fast and easy to close the knife when you don’t need it any longer.

The sliding activation button on the Shootout has positive resistance to it, but it’s still easy to use. It doesn’t have a safety like some autos do, but it doesn’t need one. Think of it like a double-action revolver.

There’s enough resistance to the lever that it isn’t going to go off accidentally. You need positive forward pressure over roughly an inch of travel before the button triggers the opening of the blade. Similarly, you need that same inch of rearward travel to close the blade so it isn’t likely to close on you accidently.

Because the blade shoots straight out of the handle, you can open an OTF auto in more confined spaces and you don’t need room for the blade to swing open from the side of the knife handle.