Quick-Start Guide to the History of Knifemaking

In This Beginner’s Guide To Knives, We Look at their History & Design

Some may argue that the knife really is man’s best friend. Sure, that contradicts the age-old notion that the dog fills this role, but consider the rich history of the knife and how long and how important the role it has played in man’s life. I think it’s safe to say that the case is closed.

For solid proof this is correct—as well as an overview of this important tool—let’s look at the extensive history of the knife and the role it has played in history.

The earliest knives were simply shards of stone, which eventually gave way to copper, bronze, iron and then steel. Around WWI, with the addition of 13-percent chromium, the material became stainless steel.

Thanks to aeronautics and space industry advancements, knifemakers started using titanium, which had been developed for lighter heat-resistant craft. In knives, this created a non-magnetic, rust-free hardened blade. Titanium was also used for lightweight handle liners on folding knives.

“… the strongest method is the full tang, which is a full-width, full-thickness extension of the blade …” 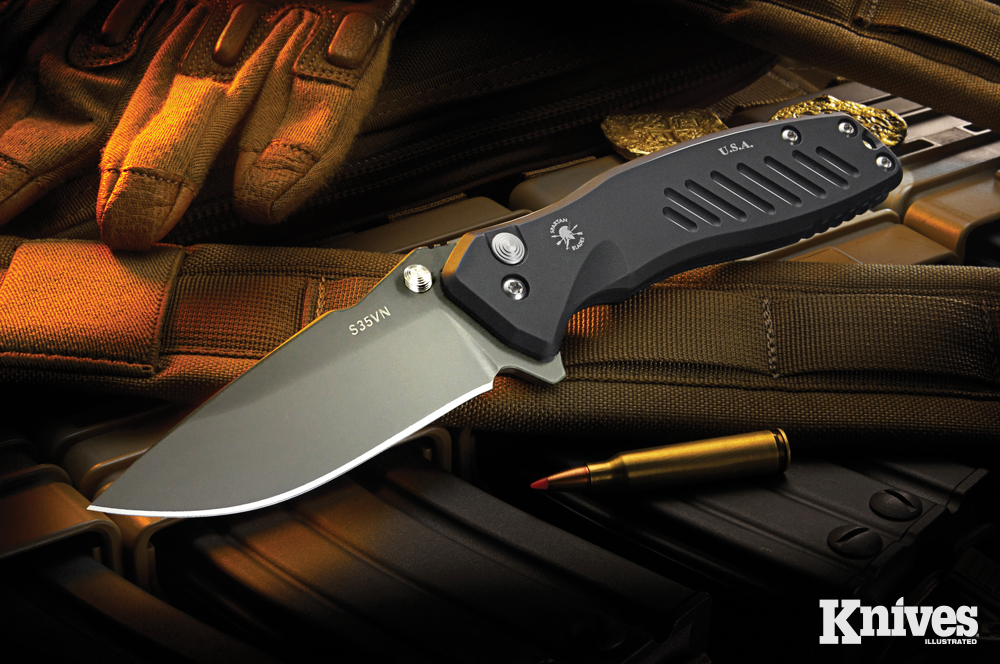 Spartan Blades’ Pallas is a button-lock, thumb-stud flipper. It features a 6061 aerospace aluminum frame. The hardware is stainless steel.

For the most part, blades are now made of steel. Carbon steel is said to keep its edge better than stainless steel, but in light of new developments, such as crucible particle metal smelting, in which bar steel is reduced to small particles and re-smelted to create a more homogenous and stronger billet, this makes the claim redundant.

Any good quality knife will have good quality steel, hardened to around 58-60 Rockwell (a system for determining the edge-holding ability of tools).

The two major types are the fixed blade—which is a solid piece—and the folding knife—in which the blade revolves around a pivot pin located at the end of the handle so the cutting edge can be safely stored inside the handle.

When carried in the field, the fixed-blade knife requires a sheath to protect the user from the cutting edge. The folder can be safely carried in a pocket or also carried folded in a pouch that is worn on the belt.

Because it is two pieces, the folding knife is not as strong as the one-piece fixed blade. The weak points are the pivot pin and the system that maintains the open or closed aspect of the knife (friction, spring or locking mechanism).

Another design that allows the blade to remain open is the slip-joint. This employs a spring in the handle’s spine that applies pressure to the top of the blade, right behind the pivot pin. This resists the blade closing without direct pressure being applied.

In the 1960s, Hoyt Buck introduced a folding hunting knife that employed a rocker arm and spring. He called this the Buck 110. A hook in the forward end of the rocker arm engages a hook ground into the rear of the blade and retains it in this locked position through upward tension on the spring. When the release button is pressed, it disengages the lock, allowing the blade to close. These knives are called lock-back knives because the release buttons are in the rear.

In the early 1980s, knifemaker Michael Walker designed and perfected the liner lock, which uses a portion of the metal liner in the handle to block the slot, preventing the knife from closing. It also eliminated the need for springs and rocker bars, which in the lock-back design, resisted the opening of the knife blade.

By the 1990s, the liner lock had replaced the lock-back design in 80 percent of folding knives. It, with the additional invention of a thumb hole or thumb stud at the rear of the blade spine, allowed one-handed opening of folding knives, a boon to many, including outdoorsmen and military/police.

Most folding knife handles incorporate steel or brass as support for wood, stag, bone or the synthetic, and in some instances, metal scales (two pieces of material used for the handle).

The blade, of course, is the working end of the knife, and certain shapes and grinds lend themselves to different applications. The general-purpose knife should have its point in line with the centerline of the handle, allowing the point to be used for boring holes in wood, leather or other materials.

Knives in various countries, such as puukko in Finland, have the point in line with the spine of the blade. This ancient design has stood the test of time.

The Wharncliffe design, which features the spine of the blade curving down to a straight cutting edge, initially was used as a seafarer’s knife. Lacking a point, it would not penetrate sailors on deck if dropped from the rigging. This design has found alternate uses, such as for castration in the cattle industry, and in the wood-carving arts.

A point that extends above the spine is called a trailing point and is mainly employed for removing the hide from an animal.

Bowie designs were primarily employed in knives for defense or fighting, but were also adapted into hunting pattern knives and are still very functional. There is a plethora of specialty points such as the tanto.

The handle, or more correctly the haft, is the portion that comes in contact with the user’s hand. It can be attached to the blade by many means, but the strongest method is the full tang, which is a full-width, full-thickness extension of the blade to which scales are attached with epoxies and/or pins, bolts or rivets. It’s shaped for a comfortable grip.

The second method, called the narrow or rat tail tang, resembles a rodent tail. In this design, the tang portion of the knife is radically thinned so it can be encased in the handle material via a drilled hole and secured with epoxies, a threaded nut and/or a pommel of metal or antler, as well as just being peened over a washer as in Scandinavian-pattern knives.

Haft materials can be natural such as woods, antler, stone and leather washers or manmade products such as Micarta, metal, carbon fiber and plastics. The choices are endless.

The final haft incorporates a stainless-steel tube attached to the blade via a very short tang and is soldered in place to make a waterproof container for escape and evasion items. Originally sealed with a rubber crutch tip and later using a threaded butt cap with internal compass, this design is considered the weakest of all, because there is an increased chance of blade/haft separation, which could render the knife useless.

This article only touches the tip of the iceberg. Once you select your knife, it won’t take long for you to understand why the knife is the oldest and best friend man can have. KI

Many Spyderco knives have adjustable clips that allow you to configure them for different carry positions.

A knife clip designed to mount close to the end of the handle so very little of the knife remains exposed when it is clipped in the pocket.

A pocket clip molded as an integral part of the handle rather than a separate component attached with screws. This style of clip was used on early Spyderco models.

The most commonly used clip on Spyderco knives, metal cips can be made of stainless steel or titanium. They vary in shape, size and finish to complement specific knife designs. They may be attached to the handle with screws or barrel bolts and often may be adjusted to provide multiple carry options.

A clip made from formed heat- treated wire that is attached with a screw or barrel bolt. Some wire clips are designed for deep-pocket carry, while others position the knife higher and closer to the pocket’s edge.