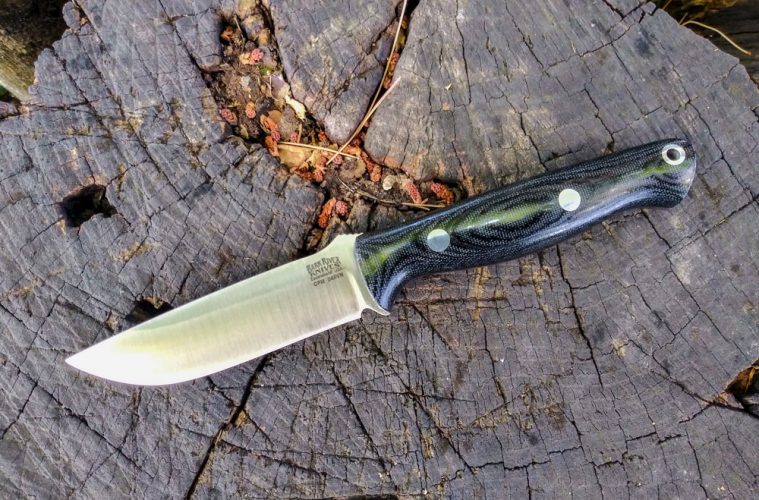 “The Mini Gunny … is lightweight and easy to carry … It is small enough to not freak out coworkers, too, which is a nice plus. ”

It would be difficult to find a knife company that is more American than Bark River Knives. The shop is tucked away in Escanaba, which is in Michigan’s Upper Peninsula. There, the company employs more than 40 hardworking men and women who assemble, sharpen, polish, and package tens of thousands of knives a year.

Its most popular knife is the Bravo 1, which was designed specifically for the United States Marine Corps Force Recon. When they requested a scaled down version, Bark River came out with the Gunny, which is the exact same knife, just a bit smaller. The Mini Gunny is, as one might guess, one more size down the chain.

The Mini Gunny was the brainchild of Jason Thoune, owner of DLT Trading. He has spent years not just handling and using knives, but listening to his customers and helping them determine the best blades for their needs. He wanted something compact enough to be carried easily, yet able to handle field work without a problem.

It might just be the best fixed blade for general EDC that I’ve come across. 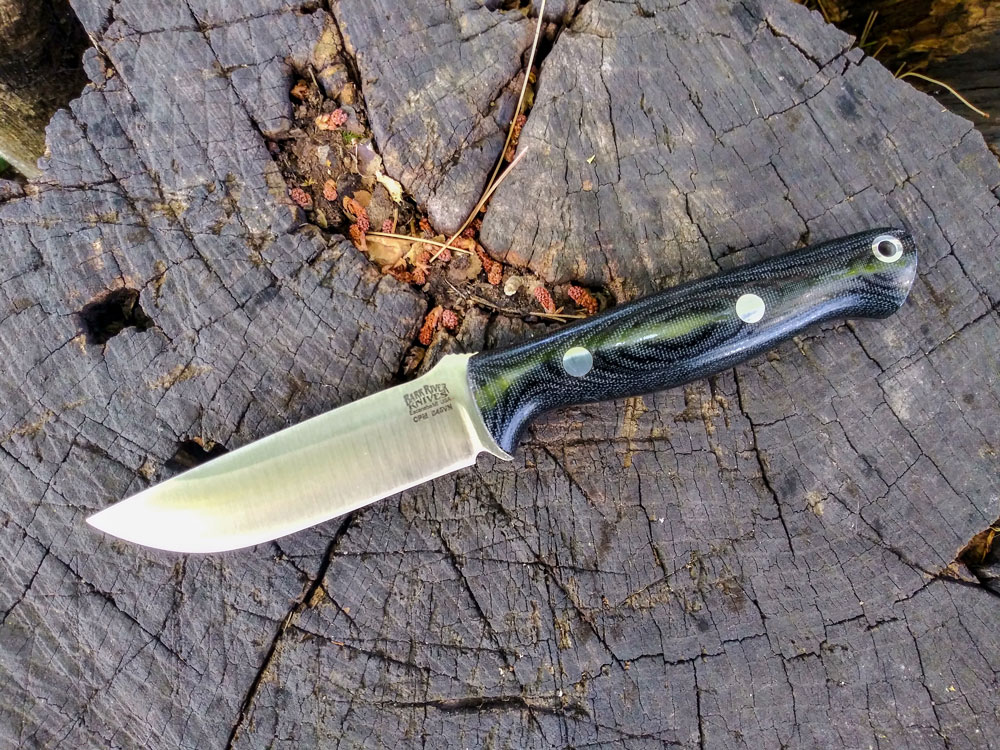 The Mini Gunny has the standard Bark River convex grind to the edge. This, combined with the eighth-inch steel, makes it a keen slicer.

I have large hands with long fingers. As a practical matter, this makes finding a suitable EDC fixed blade problematic. If I want something on the small side, say a 3-inch blade or thereabouts, more often than not the handle gives me a three-finger grip. I was pleasantly surprised to get a full four-finger grip on the Mini Gunny. My thumb quite naturally found the ramp and rested there comfortably. As with all Bark River knives, there is a wide range of handle materials to choose from when ordering a knife. Mine is the basic black Micarta. The handle is contoured with a palm swell as well as an integral guard. There is a small lanyard hole at the butt of the handle, too. 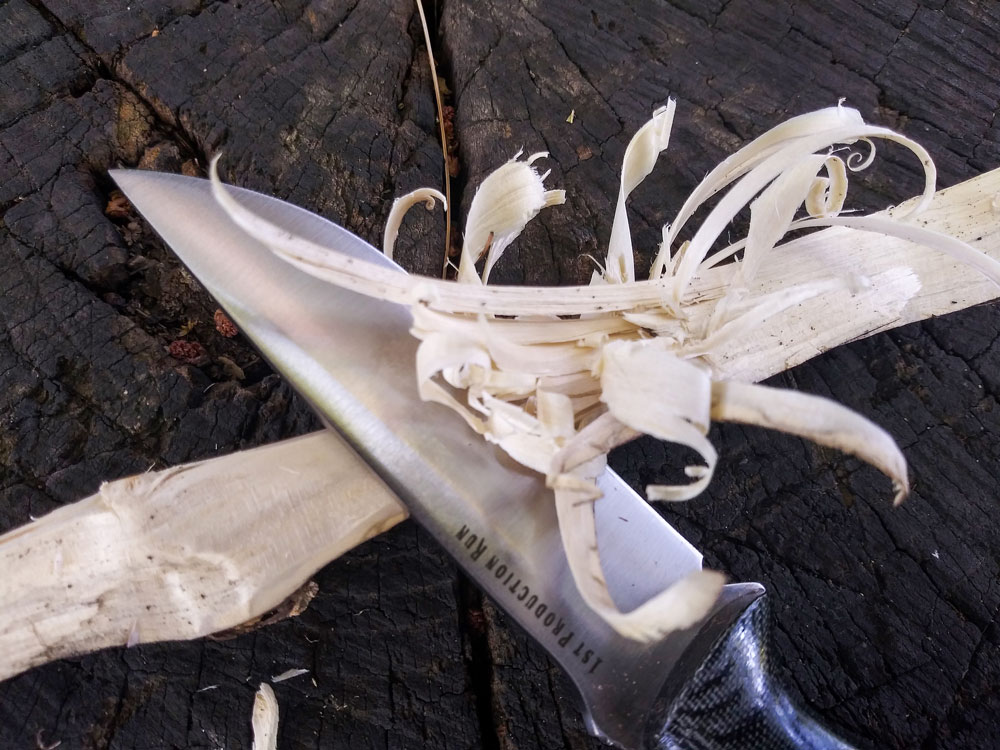 Carving a featherstick is easy-peasy with such a sharp convex edge.

The Mini Gunny has the standard Bark River convex grind to the edge. This, combined with the eighth-inch steel, makes it a keen slicer. Mike Stewart, head honcho at Bark River, chose CPM S45VN steel for this model. It is a stainless steel with great corrosion resistance and excellent edge retention. The knife arrives hair-popping sharp right out of the box.

The Mini Gunny comes with a solid and handsome leather sheath. It may be worn horizontally on the belt or, with the included straps, vertically or scout carried. There are several attachment points on the sheath should the user want to lash it to a pack or something. The knife itself weighs less than 4 ounces, the sheath adding about 3 ounces more. Even at almost 7 ounces, it is still feather light compared to many other EDC fixed blades. Note that the weight can vary just a touch depending on the material chosen for the handle scales. 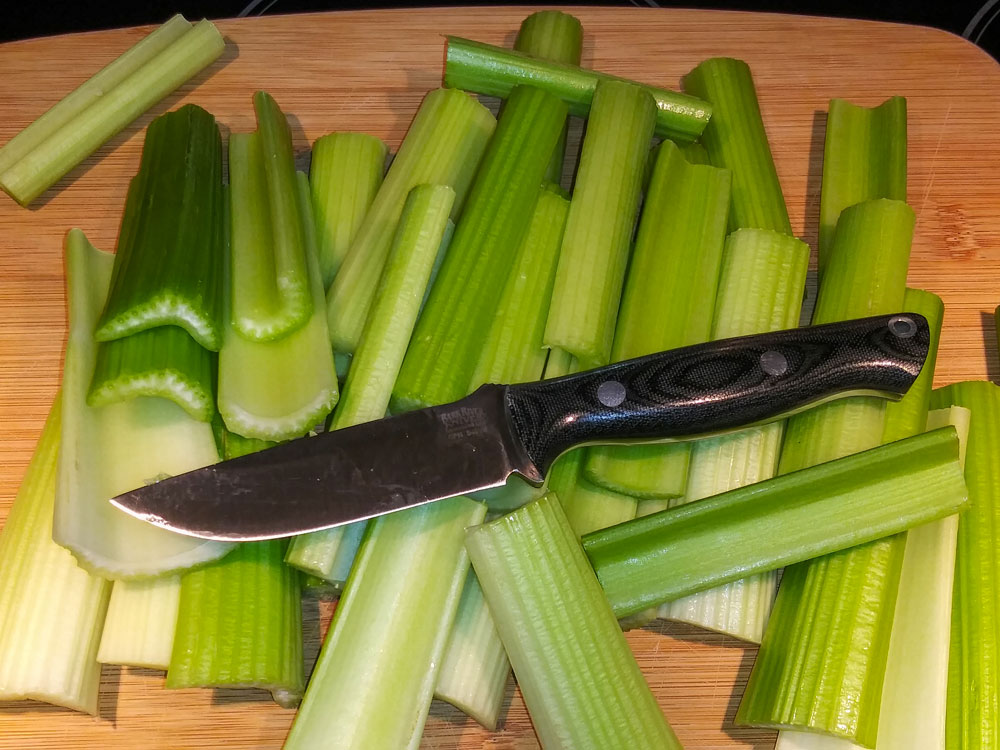 It took just a couple of minutes to turn a celery stalk into a pile of easy-to-munch pieces.

I’m not a torture test sort of person. I don’t need to know if a knife will pry apart concrete blocks. If I’m ever in a life-or-death situation that requires me to use only a knife to perform that sort of Herculean task, it won’t matter what a reviewer in a magazine said about it. I’ll find out all on my own whether the knife will handle it.

That said, it is my custom to leave the blade untouched from the time it comes out of the box until I’m done with the review process. This serves to give me an idea of how well the edge will hold up under real world use.

Being that this knife is intended to be an all-purpose EDC blade, I wanted to challenge it with a wide range of materials. First, I went outside and checked out its ability to create a featherstick.

The Mini Gunny performed very well, despite my own clumsy technique. I have no doubt that with a little more patience and care on my part, the feathers would have been thin enough to read through. As it was, I’d have no hesitation at all about building a fire using the slivers this knife generated. 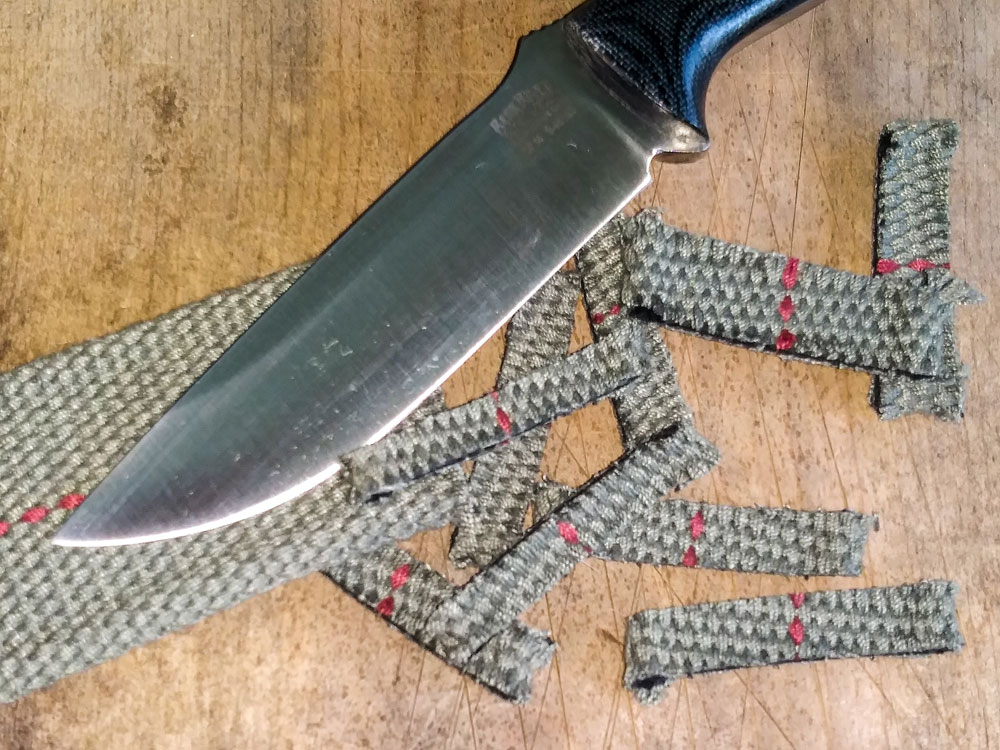 A fabric web belt posed no challenge at all.

From there, I moved to the kitchen and took out some celery. The stalk was quite a bit wider than the length of the knife blade, so I had to rotate it around to separate all of the ribs.

However, that was the only difficulty as the knife cut cleanly through each and every rib. In addition to slicing, I used some push cuts on some of the celery ribs as I was piecing them out and, again, no problem at all.

Some years ago, I picked up a fabric web belt at a thrift store for the express purpose of cutting it up for knife reviews. The Mini Gunny was like a laser beam, easily slicing piece after piece from the belt, with nary a fray or loose thread left behind.

In my box of random cutting material, I also have a thick rubber hose. I can’t recall exactly what it came from, but it is tough and has a ribbon of mineral deposit running through the length, adding to the abrasiveness.

The only difficulty I had with cutting the hose with the Mini Gunny was getting the cut started. Pinching the hose a bit to create a raised area made the job easy, though. 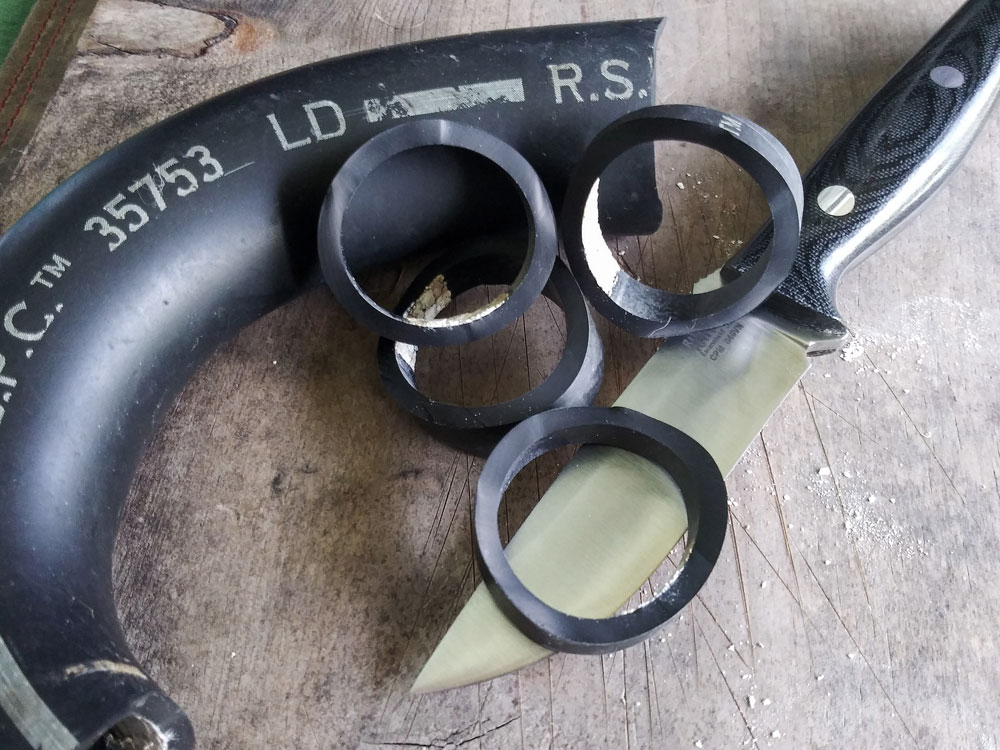 A sure sign of a knife reviewer’s office is the pile of random objects kept on hand specifically for cutting and slicing up. 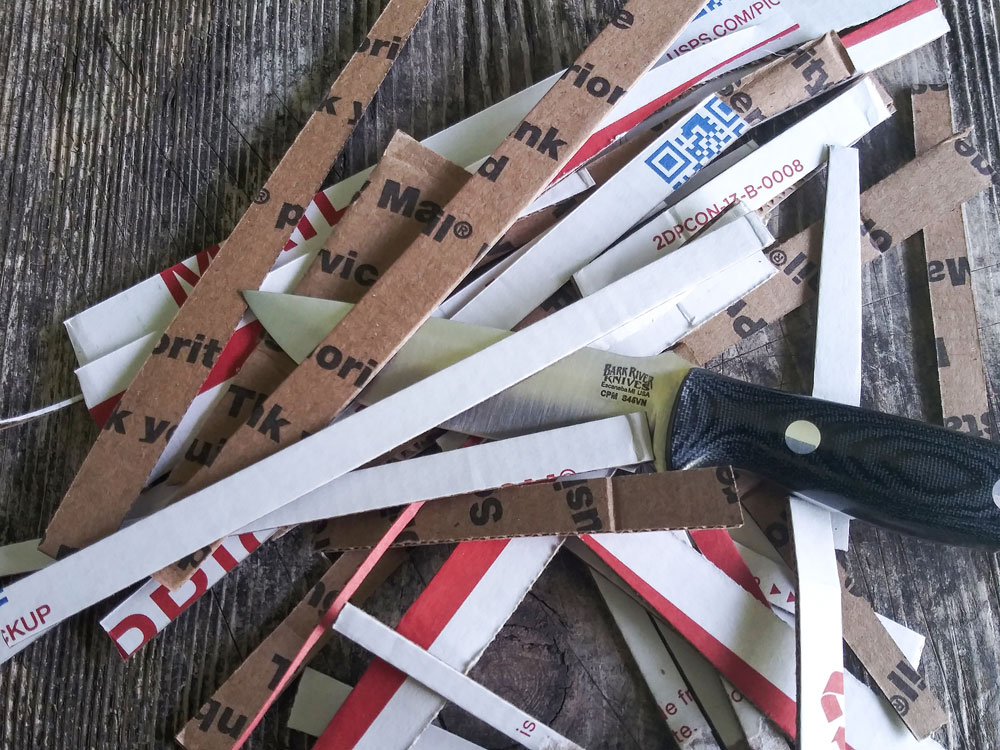 Cardboard is one the most common things we need to handle with a knife.

As much as many of us like to think that we’re carrying a knife for true survival purposes, the reality is that one of the most common materials we cut is simply corrugated cardboard. However, this material is deceptively bad for a knife edge.

The glue used in the manufacture of cardboard dries as hard as stone. I had a shipping box sitting in my office and the knife made short work of it. I used it for long, sweeping slices as well as more exacting sectioning of the material, going both with and against the corrugation. It was not a shock that the Mini Gunny performed outstandingly well.

After all of that, in addition to the routine use the knife had over a few days on my hip, it still easily shaved paper. That is definitely an edge with no quit in it.

The ergonomics of the knife are excellent. There were no hot spots nor any other issues with handling the knife. 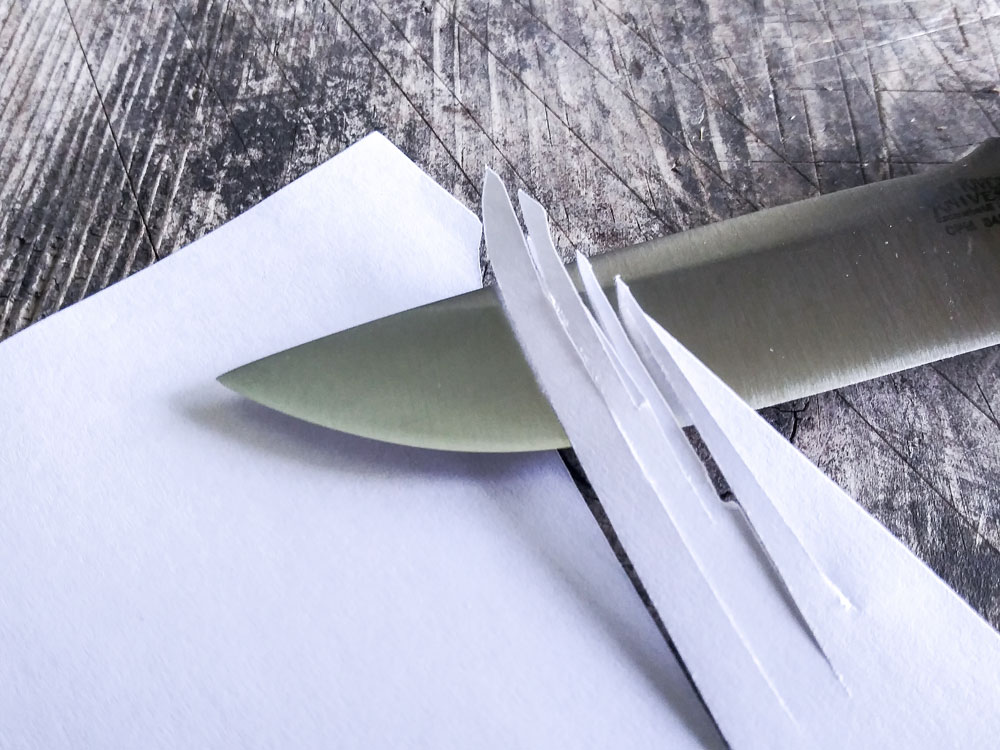 Even after numerous test cuts as well as routine use, the knife was still able to shave paper easily. 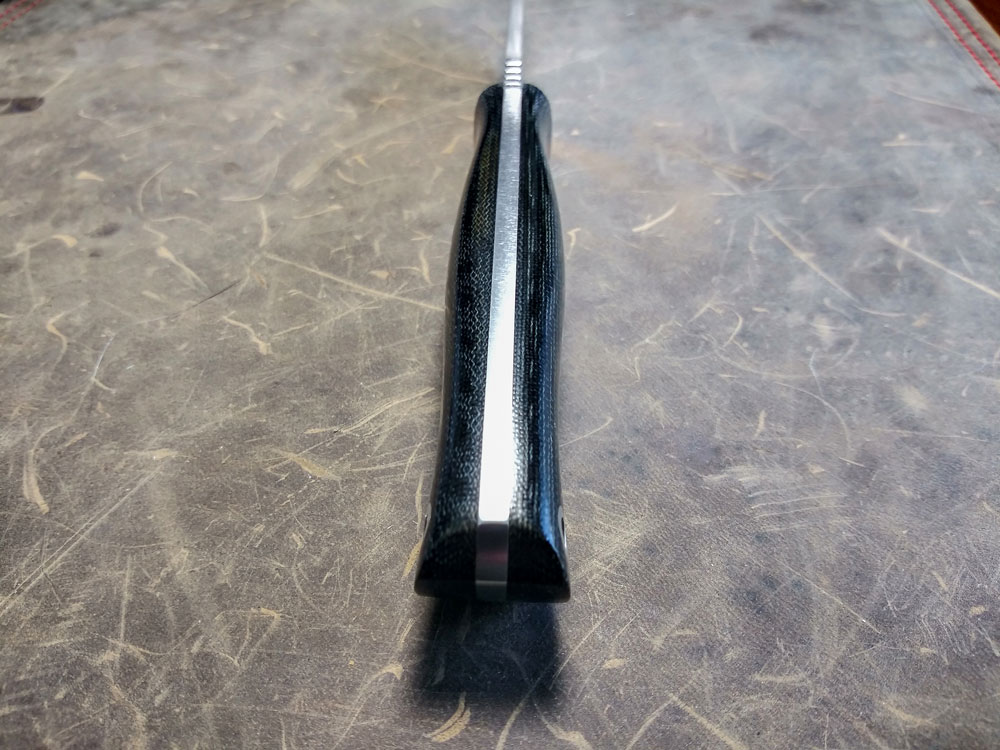 The palm swells add even more comfort to an already ergonomic handle.

When possible, I like to EDC a fixed blade, either in place of or in addition to a folding knife. It eliminates the need to open and close the knife and, should the task at hand be messy, cleanup is easier. The downside is trying to find a sheath knife that isn’t a boat anchor but is still robust enough to be truly useful.

The Mini Gunny really hits that sweet spot. It is lightweight and easy to carry, whether vertically or scout carried. It is small enough to not freak out coworkers, too, which is a nice plus.

Yet, it is still large enough to handle most common chores and tasks, whether at work, at home, or in camp. It is also a very nice-looking knife, which while not absolutely mission critical, sure makes it a sweet purchase all around. 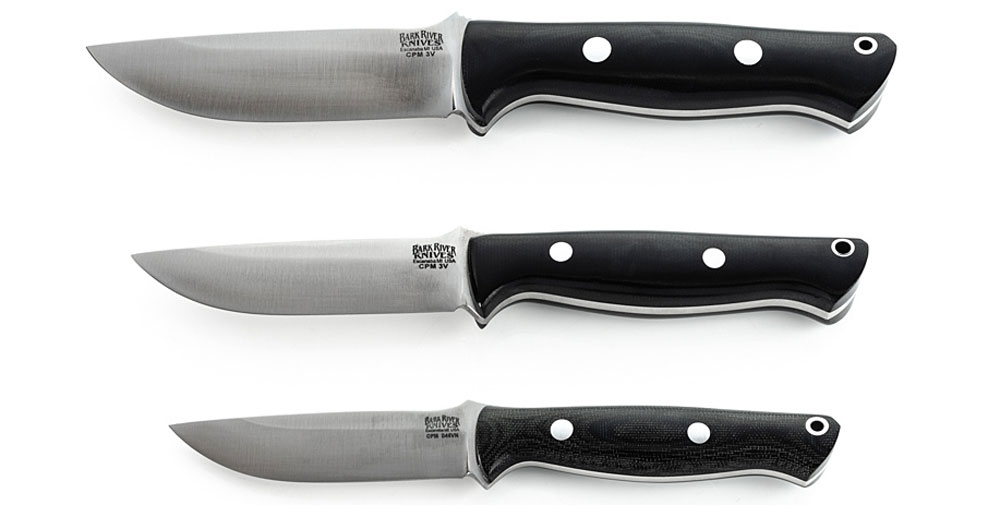 Chip the blade? Send it in.

Dropped it on the garage floor tip first?
Send it in.

Damaged in a house fire? Send it in.

Shoved the blade too far into the sheath and the point popped out the other side? Send it in.

When sending a knife in for work, do not send the box it arrived in. Instead, securely wrap the knife in packing material, paying special attention to the blade and tip so it will not pop out and hurt anyone. Box it up and pack it well so nothing can move around.

Enclose a note indicating what you need done along with your name and return address. Rumor has it that including a little bit of chocolate can speed things along, too.

Any questions on the warranty process should be directed to brkwarranty@gmail.com.