Every once in a while, a knife comes along that takes precision craftsmanship, artistic beauty, and everyday practicality and merges them together to produce a knife that sets itself apart from most others. The Gold Class Tengu Flipper is one such knife.

“This Gold Class knife from Benchmade, out of the exquisite sheath, was truly an object of beauty.”

The always good people from Benchmade Knives sent me a sample of this blade and my jaw dropped in awe of its super-fine craftsmanship. But the intent was to treat it as the cutting tool it is. I wanted to see if there was brawn behind the beauty and if it would stand up to a number of tests in the field. No spoilers here, but trust me when I say, “You need to see and use it, and you’ll be an instant believer.”

Upon opening the box, I was greeted by a sheath holding the Tengu Flipper. But unlike most knives, this sheath was created from black sharkskin leather, with brilliant blue stitching throughout. Just from this experience with the sheath, I knew I was in for a treat as I proceeded.

This Gold Class knife from Benchmade, out of the exquisite sheath, was truly an object of beauty. The marbleization on the handle caught my attention first, with the brilliant blue “gem” and decorative hardware a close second. 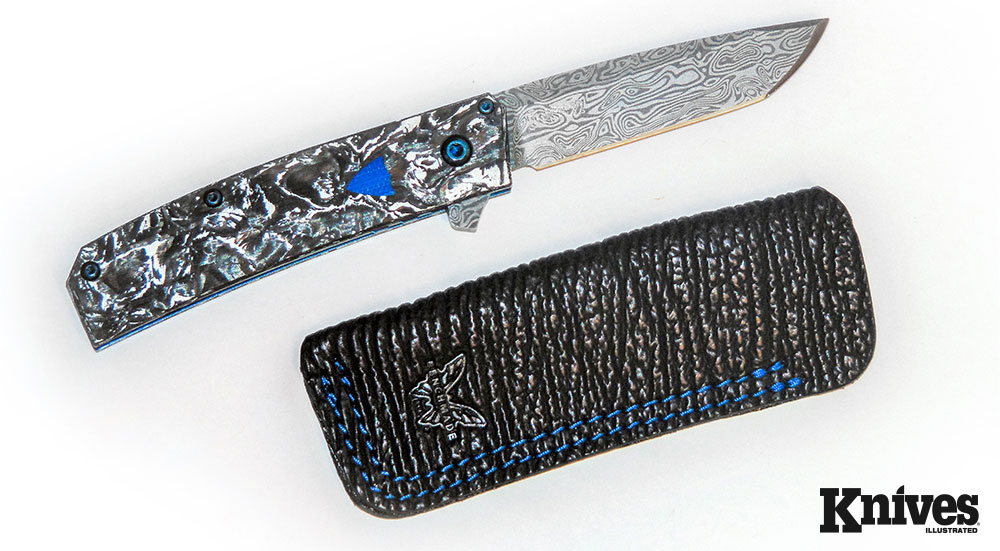 What surprised me a bit was the weight of the knife. I expected, most likely due to the extravagant design for the knife, that it would be weighty and cumbersome. But this just wasn’t the case. It had a very comfortable weight in hand without being too light or feeling flimsy to hold.

When I flicked the flipper mechanism, the tanto-style blade came to life and locked immediately into place, and it too, like the handle, was decorated with a design. This version, however, was etched directly into the steel and illustrated a random swirling pattern, perfect to complement the adjacent handle.

It could easily be displayed under glass in any home and become a wonderful conversation piece when company was over; it’s just that magnificent. But then again, it’s a functional knife and it’s my job to test if this knife has it where it counts.

For me, and perhaps many knife enthusiasts out in the world, reviewing a knife’s features doesn’t start and stop at the blade itself. Rather it begins as soon as I pick it up and continues with the smoothness of operation, the feel within my hand, and the ease of closing it and storing it on my person. With these steps in mind, I began my observations. 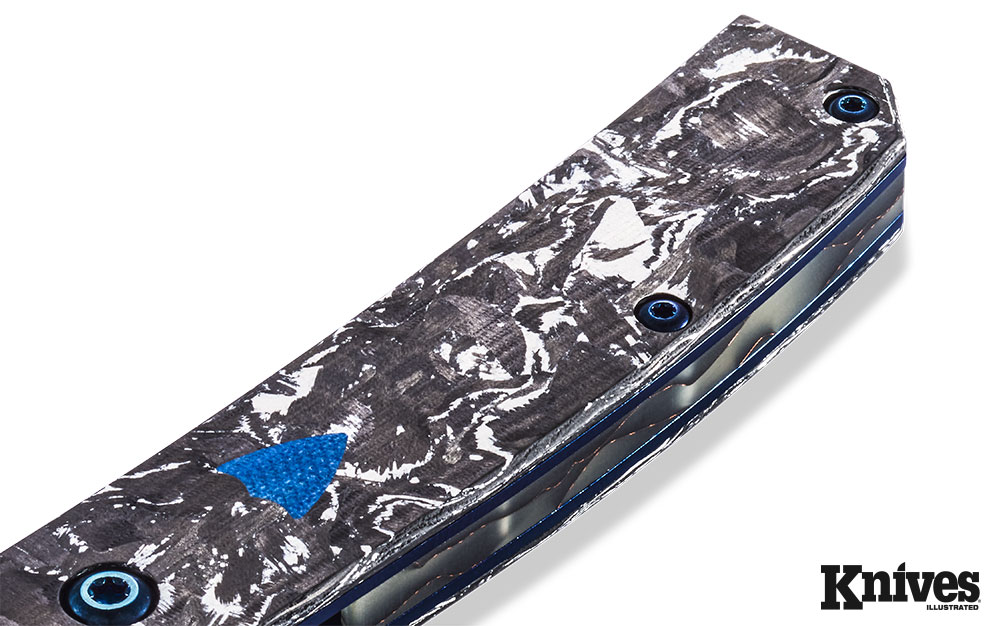 The knife, overall, was a bit small for my hand. I do have long, slender fingers, so for those who don’t this may not be an issue. For me, however, it was a bit of a challenge to keep both a secure grip on the knife, as well as a comfortable position to open the blade with the flipper “switch.”

I soon figured that using only my thumb and middle finger to hold the knife, I could easily release the blade with my index finger without any problem. 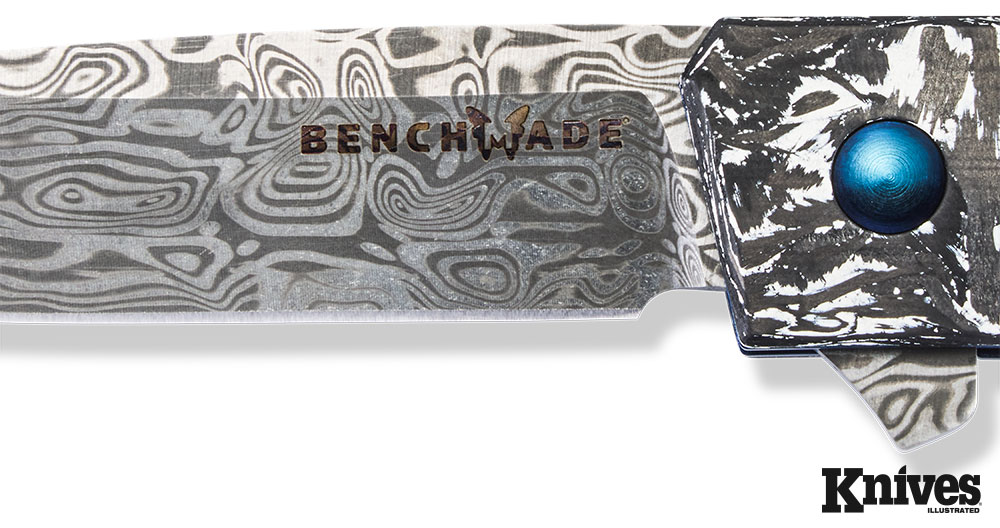 It would be my suggestion to try several different configurations for you to hold the knife before you dismiss it as uncomfortable. You will find the best one for you, guaranteed, and you won’t be inclined to pass on this spectacular specimen.

Once firmly in my hand, I tested the fluidity and speed of the flipper mechanism, and I have to say it operated flawlessly. The blade snapped and locked into place with both an audible crispness as well as a superbly refined smoothness. 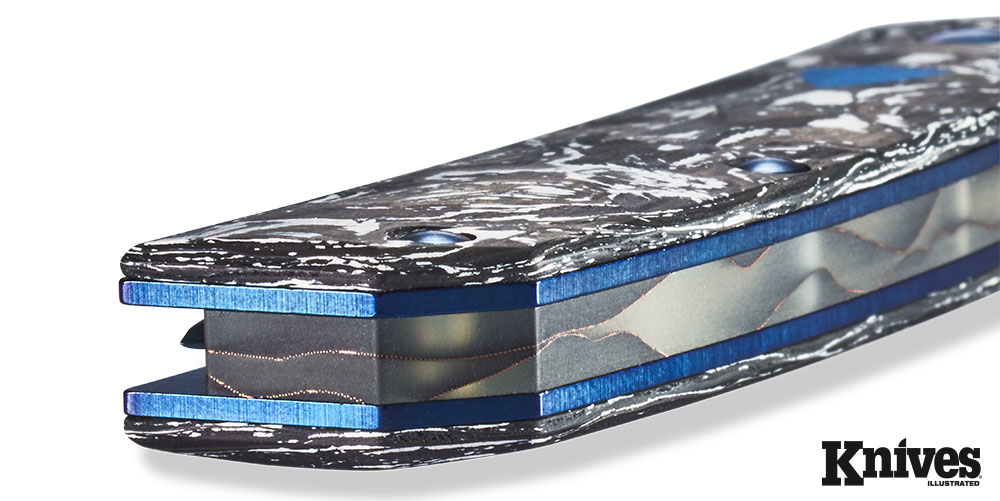 The blue G10 inlay illustrates the fine details that this knife represents, making it truly in a class above most others.

When extended, the lightweight body and the 2.75-inch blade exhibited the perfect balance in my palm, not top heavy and definitely not all “handle” as some inferior knives on the market today exemplify.

What I also did notice which was a pleasant surprise was that the Tengu Flipper, when held in a reverse grip, offered the perfect amount of handle for my four fingers to close around and secure. I regularly use the reverse grip, mainly for self-defense applications, and in this case, it was ideal in both its length and shape of its handle.

If a highly decorative knife were not intended to be used, it would be more of a prop than a tool. This knife definitely needed to be put through the ringer to test the mettle of the metal, along with its overall cutting abilities.

I wanted to first experiment with the tanto-style tip, specifically its ability to puncture without resistance. The back of the blade isn’t on the thin side, so I wasn’t certain by any stretch that a relatively thick piece of cardboard wouldn’t pose a problem for the knife.

With a short, quick, and forceful downward strike, the Tengu flipper pierced the durable cardboard with no push-back from the cardboard. I continued with multiple punctures and all strikes issued the same results: clean piercings with no distinctive resistance. 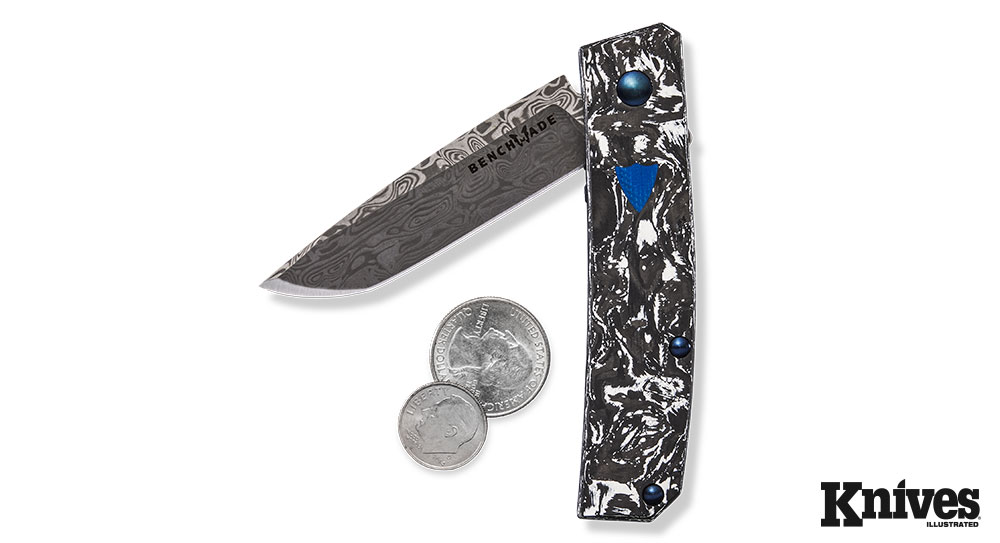 In relation in size to two coins, this knife can find a home easily in pants or jacket pockets.

Cordage and tape posed no problem for the Tengu Flipper. Both these items are frequently encountered throughout the day and both offer more difficulty than one may think.

Gunky tape residue and reinforced cordage usually prove difficult for household scissors and small pocketknives. This knife sliced through the multi-strand cordage with ease, even though the interior components included snare wire, fishing line, and tinder cord in addition to the 550 strands.

No area of this knife can be considered “plain,” from the decorative handle to the BiFrost pattern on the blade itself.

Tape, especially duct tape and electrical tape with their reinforced cloth interior and extreme elasticity, respectively, can also put up a fight with a blade, even one with a very good edge. The duct tape didn’t stand a chance against the sharpened blade. The electrical tape, even without being pulled tightly, didn’t pose a problem for the knife.

One thing to note is that even though this blade is ideal for cutting, you may very well want to keep it for special occasions due to both its amazing craftsmanship and it being an all-around conversation piece.

The Tengu Flipper does have a huge negative, and that is photos of this Gold Class knife can’t do it justice when compared to having it within your grasp or displayed on a shelf. If it was only pleasing in aesthetics, then I wouldn’t have given it a second thought, because a display prop is something I don’t need. However, it offered a complete package: a highly functional blade with its accompanying opening mechanism that paired well with its classy outer shell and accessories.

“…this knife will be sought after  by collectors and knife enthusiasts alike, so much so, you may miss out when trying to snag one for yourself.” 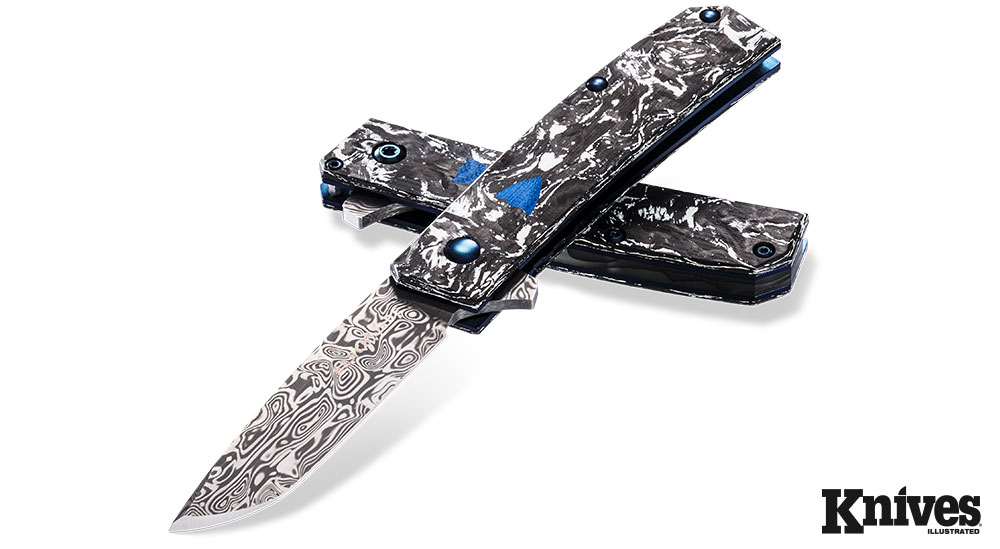 Whether opened or closed, this exquisitely created knife exudes sophistication and class. With more than 2.75 inches of cutting edge, don’t forget this knife is as practical to use as it’s beautiful. 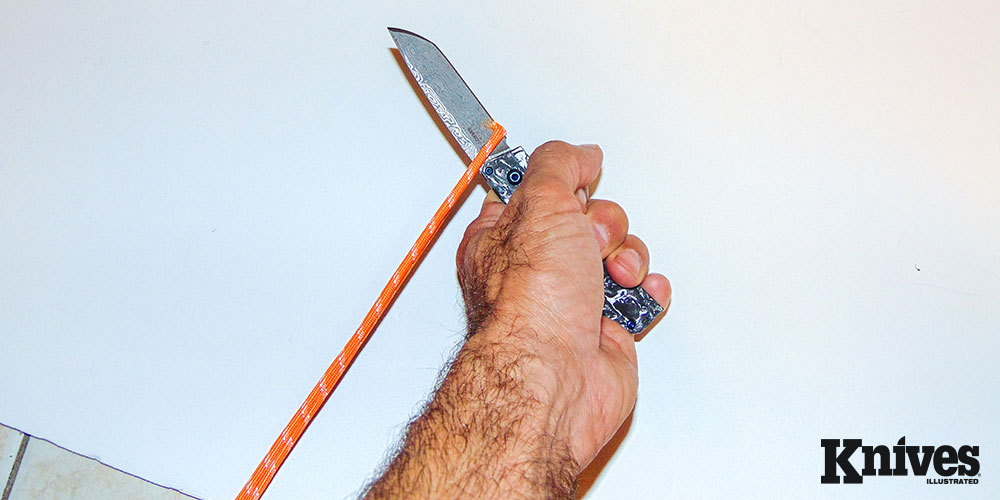 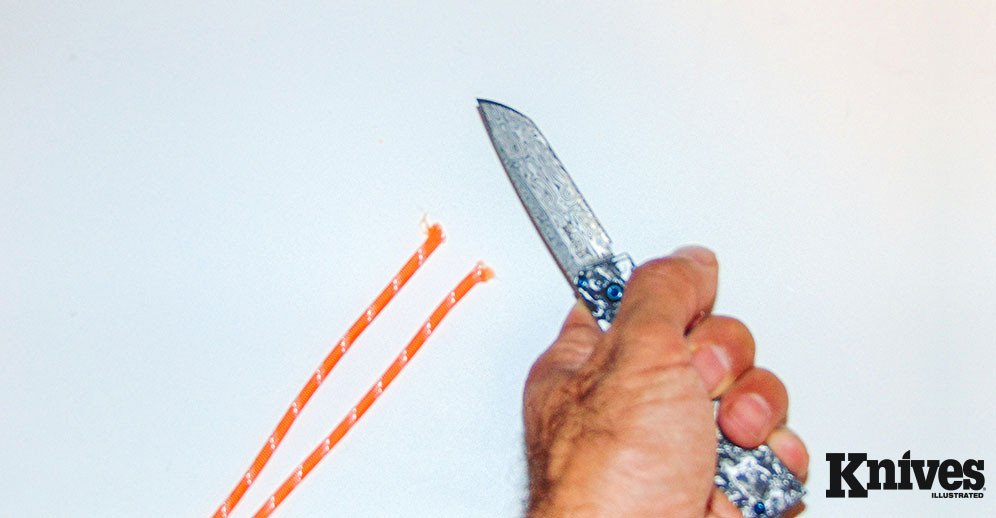 This knife won’t last, and I don’t mean that in a quality sense. I’m suggesting that this knife will be sought after by collectors and knife enthusiasts alike, so much so, you may miss out when trying to snag one for yourself. Is it a bit pricey? Perhaps, but you do get what you pay for in life, and knife buying is no different. Every dollar put in is truly apparent in all facets of the knife’s design, decoration, construction, and functionality. This is the Gold Class at its best, and it fully shows.

Jared Oeser, designer of the Benchmade Tengu Flipper, was always “into” knives. From using them regularly to collecting, the knife, to Jared, had a special place in his life. A home builder by trade, he first dabbled at the idea of creating a knife about 10 years ago.

He reached out to his long-time friend, David Lang, to show him the basics and to put his love of knives into creating his own. This started the wheels turning in his highly creative mind and Jared has not looked back since.

Today, he works as a knife designer full time and puts his natural artistic talents into every blade he creates. His philosophy is simple: “…never call a blade finished until it looks and performs like a knife he himself would buy and keep,” and he would always make, “what he liked and not what someone else likes.”

Today, he continually creates knives that not only function well, but do what is expected from them, and that is to cut extremely well. With that, one can sum up Jared’s underlining mantra when it comes to the knives he designs and creates and that is, “The knife has to be functional, has to be comfortable and can’t be ugly.” These are truly three traits that all knife enthusiasts want, and Jared truly hit the nail on the head with what he delivers to the eager consumers.