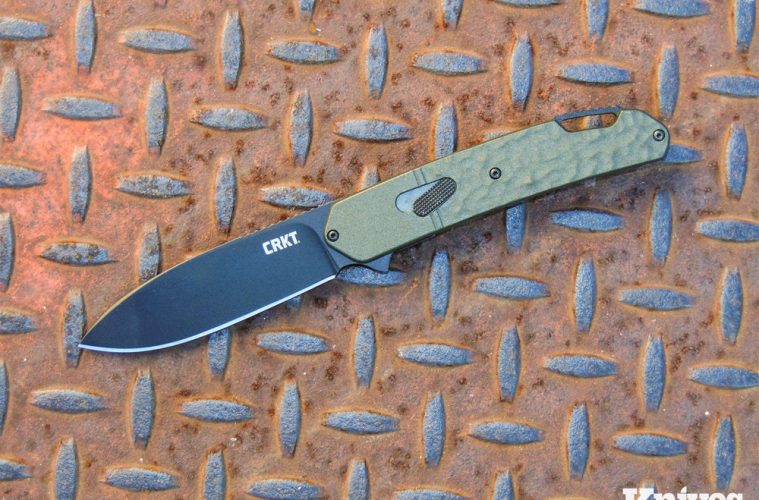 Created by world-renowned designer Ken Onion, the Bona Fide folder from Columbia River Knife and Tool (CRKT) exhibits power and dependability, all the while having a distinct connection to Onion’s home, Hawaii.

With a lightning-fast opening, an easy-to-sharpen blade, and a no-nonsense, takedown design for easy cleaning, you’ll have a go-to blade for dozens upon dozens of daily applications.

Aesthetically speaking, the blade and handle are top-notch. But, while seeing is believing is apropos in some areas, it’s not normal operating procedure when testing a knife’s durability, cutting ability, and overall reliability for everyday use. That lies with brutal, down-and-dirty testing that culminates in a verdict whether it should or should not become a part of your go-to gear collection or earn a place firmly on your belt.

Thanks to the good people over at CRKT, I received the Bona Fide OD Green Folder and set out to prove its worthiness as part of my everyday carry, or conversely, determine that it should be relegated to being thrown to the back of my seldom-used, utility drawer.

As mentioned above, the design for the Bona Fide was inspired by the designer’s time living in Hawaii. This is easily evident from the foliage-inspired green color, as well as the shape of the knife’s handle, which mimics the shape of a traditional Hawaiian wa’a, or canoe.

The overall feel of the knife within my hand was one of solidness and stability. The slight texture on the handle provided just the right amount of grip.

The flipper deployed the knife both rapidly and smoothly, and the blade locked without hesitation or roughness. The closed length was just a bit too short to my liking for my larger-than-average hands; perhaps an inch or just shy of an inch of extra length would have offered a firmer base when I opened the knife. This minor flaw was just about erased as a con to me when I carried the knife later.

The knife was the perfect length to comfortably clip to the inside of my pocket without interference when sitting or walking or when reaching for the knife.

The spear-point blade, at just over 3 1/2 inches, was coated in a PVD finish and was sharp directly out of the box. When opened, the knife exhibited great balance in the hand, even with its lightweight, aluminum handle.

I have noticed in the past that some knives that boast a lightweight handle sacrifice balance and present an extremely top-heavy knife, which poses some durability and safety issues. The Bona Fide, though relatively lightweight, exhibited nothing of the sort.

Two areas vitally important for a folder are the speed and smoothness of the blade when it’s opened and the ease of cleaning the knife when it’s used in less than perfect environmental conditions.

The Bona Fide excelled in the “opening” test. The fluidity of the flipper to open the knife with one stroke worked consistently as I repeated this action for upwards of a dozen or so times.

With each flick, the blade locked firmly into place. The effort needed to open the knife was moderate, just enough to make it work, without excess strain on your fingertip or your hand when gripping the knife as it opened.

“…This folder would be at home in your pocket or clipped onto your waist in both urban and rural environments and can offer a plethora of everyday…uses.”

What truly interested me was the takedown of the knife, without tools mind you, when the mechanism needed cleaning from dirt, sticky residue, or anything else that can gunk up your valuable tool. It is called the Field Strip Gen II, and it’s an updated version of that found on CRKT’s earlier Homefront models. 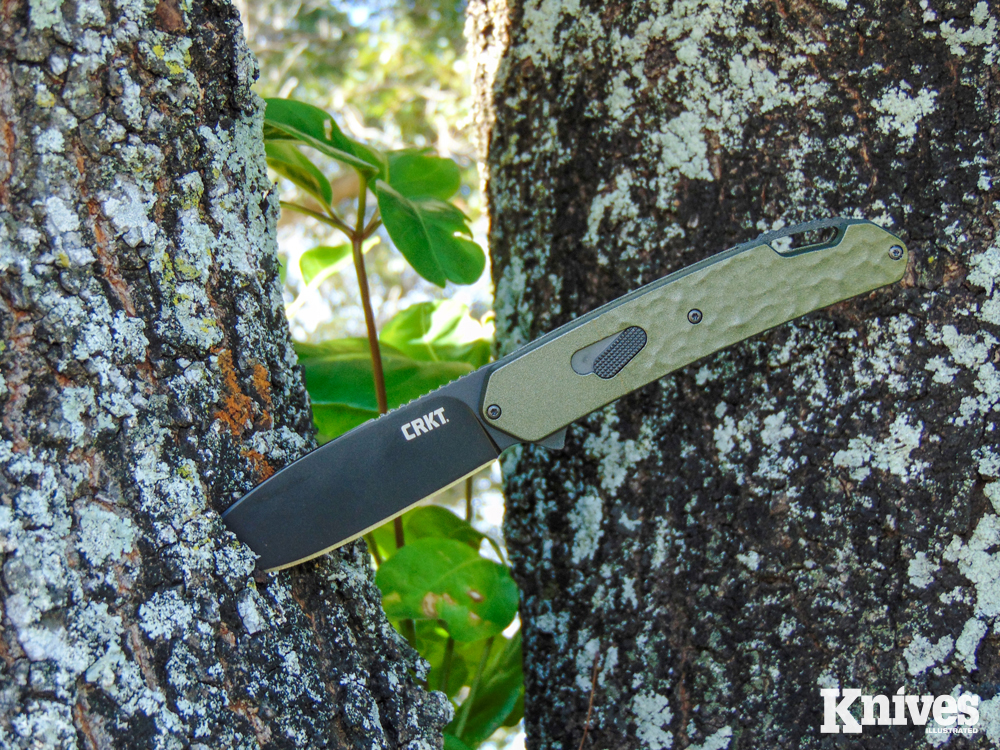 The Bona Fide would be equally at home in the woods as it would be in the city.

The lever to disassemble was located just where your thumb would rest when holding the knife. The included instructions stated to slide the lever upwards and the knife will break apart into three pieces (the blade and two portions of the handle).

No exaggeration, without any effort whatsoever, I was able to disassemble the knife into the three pieces ultra-quickly and easily. This makes cleaning your knife in the field fast and efficient.

Afterwards, I reassembled them back into a solid knife, just as fast, all without any noticeable weaknesses in the handle or the blade. That was truly incredible and, in itself, is well worth purchasing this piece.

Cutting is what a knife is used for primarily and without testing the blade, a thorough verdict on the knife’s usefulness couldn’t be achieved.

Bear in mind, these cutting tests are out-of-the-box sharpness and not with additional sharpening on my part. For many individuals, knife sharpening is not in their wheelhouse, so the expectation is that the knife can cut immediately upon opening.

The Bona Fide is an attractive knife, especially in the OD Green variation. CRKT photo

Slicing through one sheet of paper may not sound like a big accomplishment, but if a knife can slice cleanly through without bending the sheet or stopping within the sheet during the cut, then the blade exhibits a razor-like edge.

The Bona Fide did just that. Three cuts were performed and three times the blade cleanly split the sheet into two. 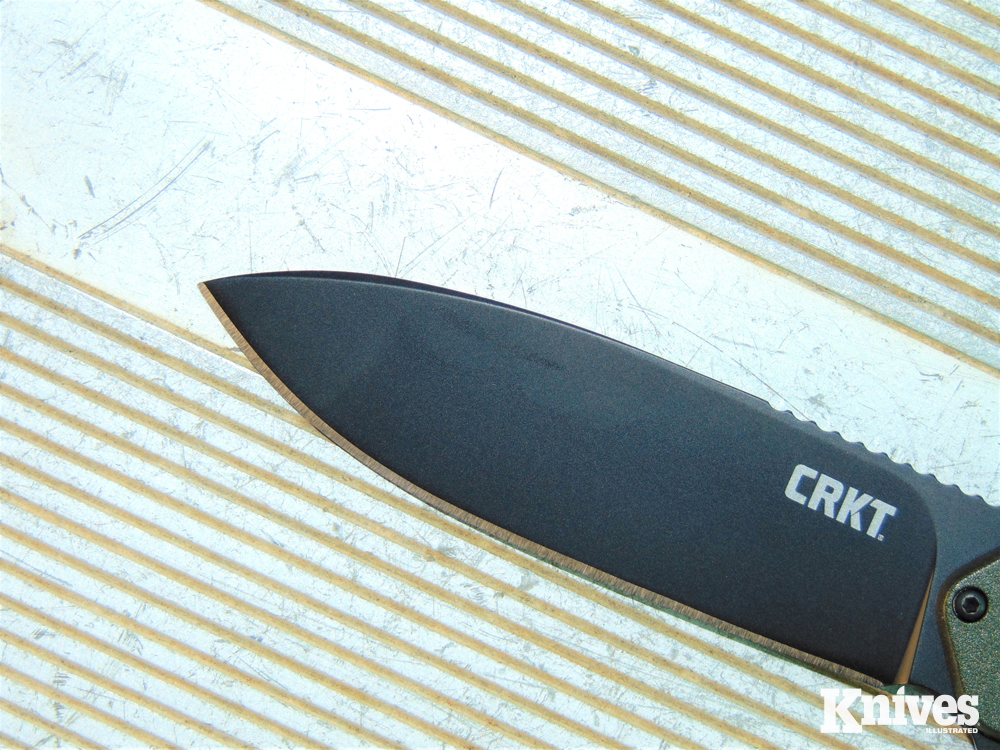 The blade of the OD Green model of the Bona Fide features a PVD coating.

Paracord was next. Some versions of paracord these days have much more inside the outer casing than just fibers. In fact, many brands of paracord now add fishing line, tinder, and even snare wire inside without compromising the overall strength of the cordage.

These additions can pose a challenge to poorly sharpened knives and cause major delays or issues during a true survival or emergency situation. I purposely chose this type of paracord to give the Bona Fide a tough assignment.

Suffice it to say, the paracord wasn’t a thorn in the knife’s side; it sliced through it with no effort and with me using only low-to-moderate strength. 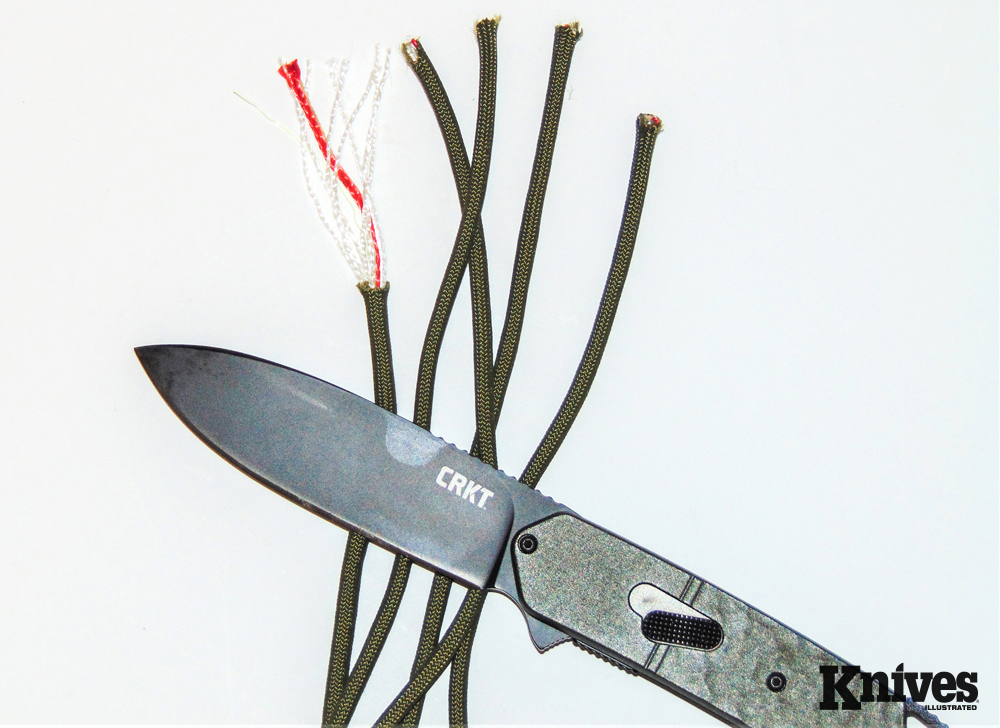 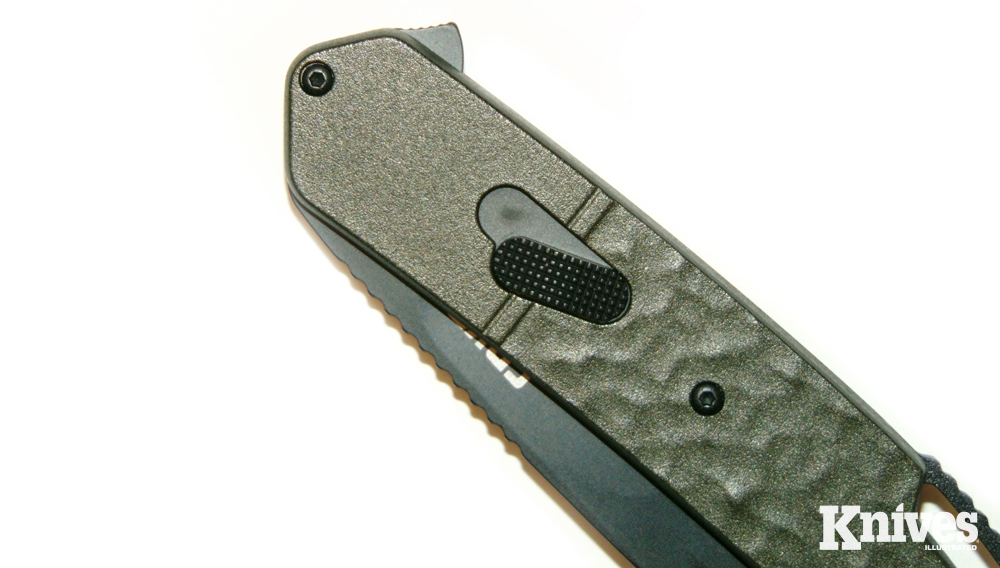 With its nature-inspired aesthetics, it would be a waste not to take this knife into a more rural setting and perform some tasks that would be needed if one were in Mother Nature’s backyard.

These tasks could include shaving off slivers of wood from a stick or small log to produce fine tinder, whittling down branches to create makeshift utensils, and creating a sharp point on the end of a sapling to create a spear.

“…I was able to disassemble the knife into the three pieces ultra-quickly and easily.” 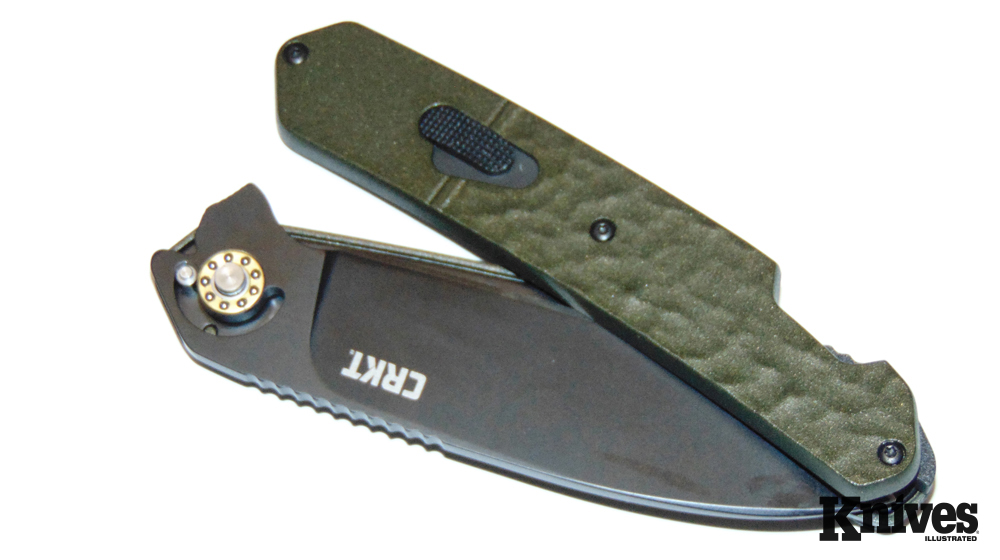 Creating tinder was not an issue. The handle contoured to my hand and allowed me precise control to shave extra-thin slivers into a small pile. The knife caught up into the wood chuck a few times, but that was my error as I angled the knife too sharply into the wood. Once I corrected the angle, there was no stopping the Bona Fide in this field test.

The disassembly latch is positioned where you might place your thumb, but it doesn’t interfere with manipulating the knife during cutting chores.

Whittling takes precision and control, and again, with its meaty handle, the knife performed well to whittle down a crude spoon. By placing my thumb and forefinger on the base of the blade and my remaining fingers gripping the handle, I was able to use the knife tip to dig deep and “gnaw” into the wood for the concave section of the spoon.

Though it remained tough throughout the process, I would say that using the knife in this manner, over time, would cause some issues with the integrity of the blade. 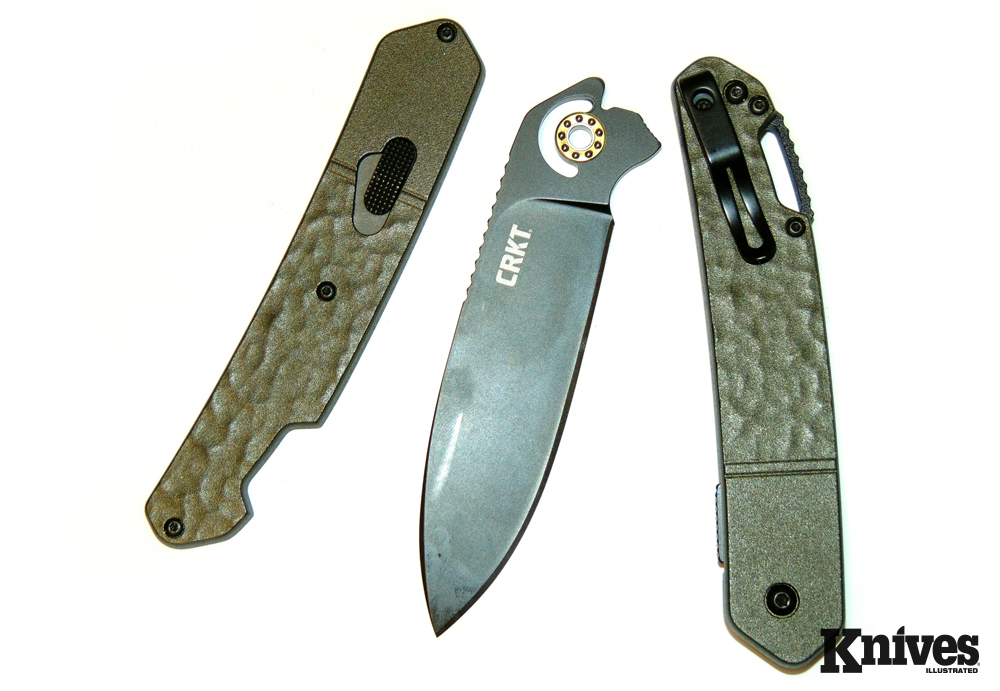 Once disassembled into its three major components, the Bona Fide is easy to clean—a big advantage over other folders.

The spear tip was perhaps the easiest of the three tasks. With fresh, green wood, the moistened fibers at times can resist some knives as they cut. There was minimal resistance with the Bona Fide and a sharp point was created on the shaft in a short amount of time.

Though the choices for folders on the market today are extremely numerous, options for a quality blade with discreet, beneficial features are not as plentiful. As such, the CRKT Bona Fide knife is an ideal purchase for you.

This folder would be at home in your pocket or clipped onto your waist in both urban and rural environments and can offer a plethora of everyday and survival uses. The Bona Fide Folder is a bona fide, must-have for a variety of cutting needs.

WHEN DOWN-N-DIRTY IS NOT A GOOD THING

Knives, folders especially, can collect a lot of nasty “stuff” through their daily use. These materials can include pocket lint, greasy liquids, dirt, sand, tree sap, and dozens of other materials out in the natural and manmade world.

Because of these substances, your knife’s performance can dwindle greatly to the point of not functioning when you need it in the field. The opening and closing function can stick. The various locks and releases can become inoperative, and the blade itself can be damaged in some circumstances.

Knives that can be disassembled, more often than not, require some basic tools to break the knife down into cleanable components. Trouble arises when those tools aren’t with you and gunk and goo overcome your knife’s ability to function—unless you have the Bona Fide with you.

The Field Strip Gen II on the Bona Fide offers a tool-free, one-button takedown of the knife and just-as-fast reassembly. This specialized feature, designed by Ken Onion, makes cleaning the knife in the field an efficient process. This further allows you to get back to business hunting, fishing, camping, or any other outdoor activity.

Editor’s note: A version of this article first appeared in the May-June 2021 print issue of Knives Illustrated.