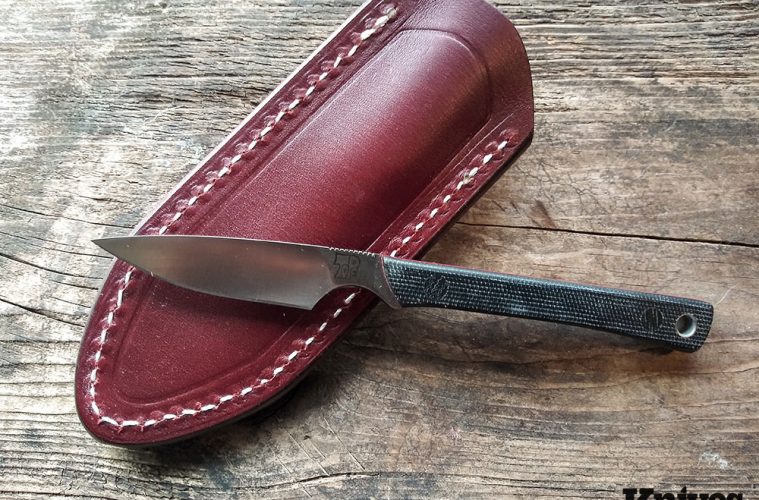 A few years ago, I was in Escanaba, Michigan, visiting a couple of knifemakers in the area. While I was sitting in Mike Stewart’s office at Bark River Knives, Dan Tope walked in, spoke with Mike for a second, and then left in a hurry, presumably to get back to a grinder.

Mike told me that Dan was an up-and-coming maker to watch. He wasn’t wrong, not by a long shot, and Tope’s Covert Field Scalpel is just one example why.

Ever since that trip to Michigan, I’ve been keeping an eye on Dan and his work. I’m not the only one, either. His Facebook group, Tope Nation, has close to 10,000 rabid fans of his work. Dan and his business partner Mike Emch are a regular presence in the group, letting people know when knife drops are happening or offering up special one-off knives for sale.

Dan has, by his own admission, been a knife nut almost his entire life. He’s always been drawn to sharp edges and pointy tools. In his younger days, he dabbled with modifying knives he’d buy or that he was given.

Over the years, he refined his knifemaking skills, learning through experience as well as by studying other makers, and improved his workshop as he went along. Finally, in 2014 he was able to make the jump to start making knives for a living.

“I’ve owned hundreds of knives and this one easily ranks in the top five of them all.” 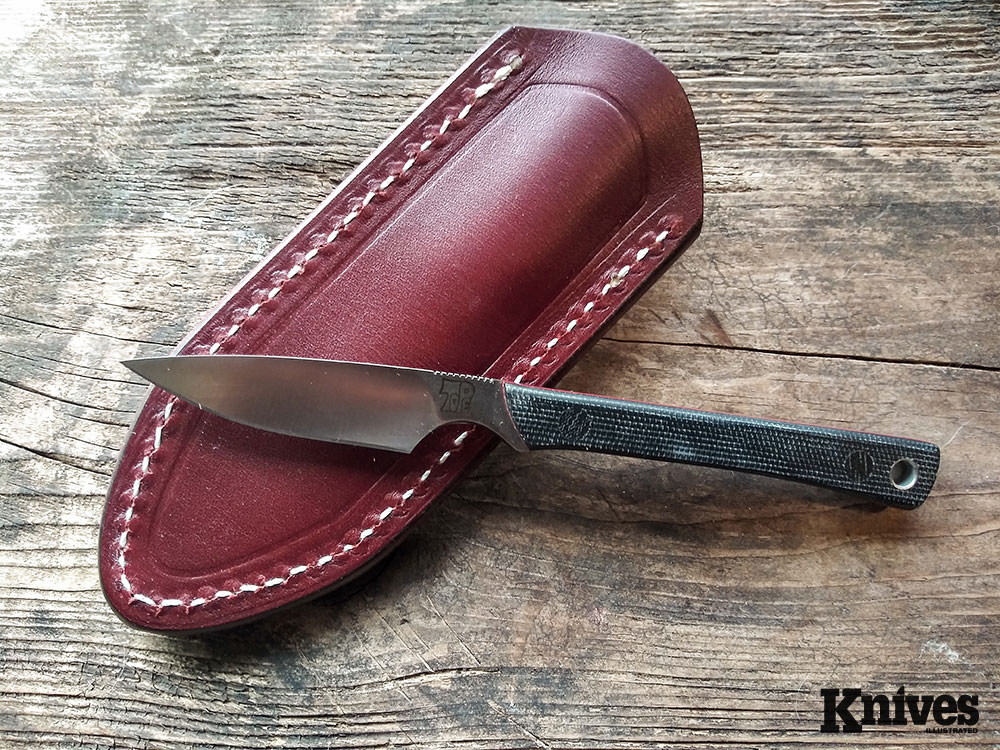 You could put it on your belt, but the Dan Tope Covert Field Scalpel is a small, fixed-blade knife sized right for pocket carry.

Over the last several years, he’s developed almost 40 distinct knife models, ranging in size from pocket-carry to full-size kukri. Among other things, Dan has an amazingly intuitive sense for handle shape and size, with several of his models being extraordinarily comfortable to use, even after extended periods of time.

When I saw photos of the Covert Field Scalpel, I knew I had to get one. I’ve always had an affinity for small knives that can do solid work. Don’t get me wrong; I like huge knives just as much as the next guy or gal. But I love a knife that fits just right, that can handle a range of chores without being a boat anchor on my hip.

As with many Tope models, the Covert Field Scalpel is a semi-custom knife. The standard practice is to put down a small deposit when ordering, along with specifying any special blade finish (acid stonewash, bead blast, hamon, torn) or handle material (carbon fiber, resin, wood, upgraded G10, or Micarta), along with whether you want flared tubes or mosaic pins in place of the standard pins.

You can also request a tapered tang if you’d like. Naturally, each of these adornments or adjustments will add to the final cost.

“The Covert Field Scalpel truly is the ideal size for a pocket carry fixed blade. It runs 6.5 inches end to end, with a 3-inch blade.” 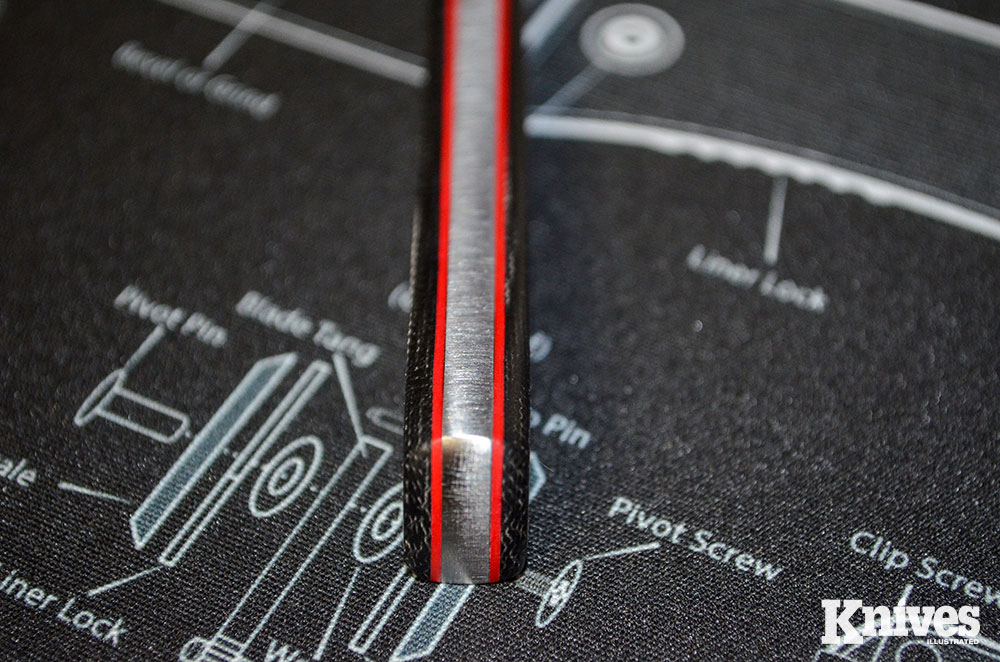 The red liners add some pop against the steel and the black canvas Micarta scales. They also add just a slight increase in overall thickness to the handle.

It is worth noting that the Covert Field Scalpel does not come with a sheath. The buyer must procure one from the maker or vendor of their choice, if they’re not looking to just make their own.

Initially, I’d planned to secure the services of Skin Bender Leather Works in Gladstone, Michigan, as Jenna Martin is my usual leathersmith of choice for such things. However, as luck would have it, right after purchasing the Scalpel, I won a sheath from Delta Sheath, LLC in a raffle. Its Tru-Lock Mini Shield model fits the knife perfectly.

The Covert Field Scalpel truly is the ideal size for a pocket carry fixed blade. It runs 6.5 inches end to end, with a 3-inch blade. The overall shape is reminiscent of, well, a scalpel with a long handle in relation to the blade. For me, this is ideal as I don’t care for any sort of a three-finger grip. There is plenty of room for all four fingers, especially when using the generous finger choil.

This is a full-tang knife, with a 3/16-inch spine. This thickness gives the knife a stout feel, despite the slim overall size. Tope’s standard choice for steel is CPM 3V, which is the case here. While it isn’t a stainless steel, it does have great corrosion resistance. It also holds an edge very well.

The handle is blocky but rounded where it counts so as to be comfortable to use. There is a bit of jimping on the spine opposite the choil. Overall, it is thin and low-key, weighing just shy of 2 ounces. Even with the sheath, it fits into any pocket easily and comfortably.

That was the first thing a friend of mine said when I showed him the knife. He’s a knife aficionado like most of us, and as a chief of police, he has been using knives both professionally and personally for ages. 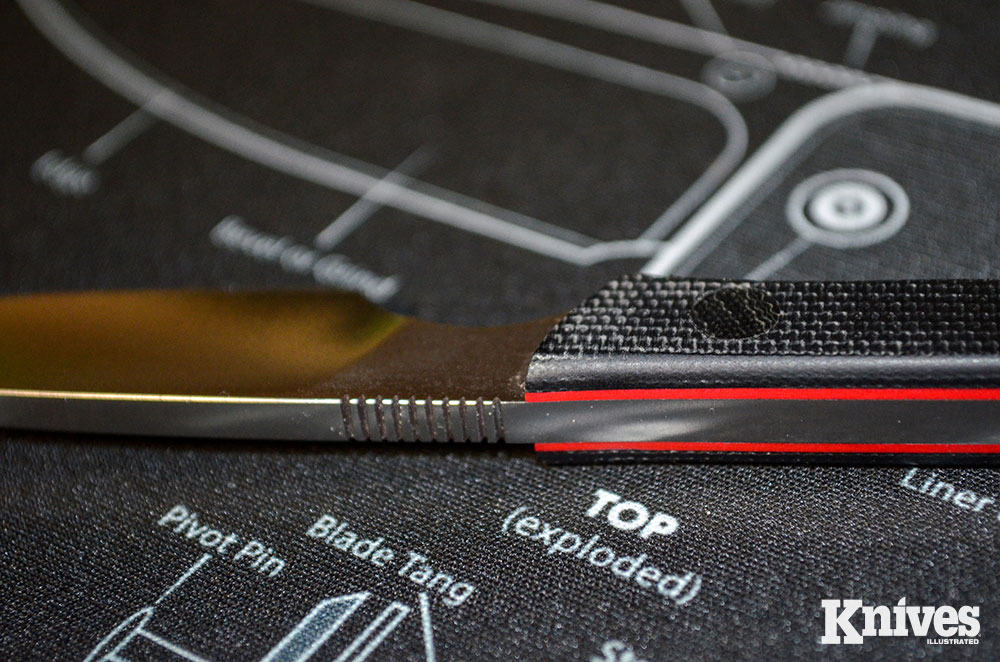 The jimping adds a little extra traction when manipulating the Scalpel for detail work.

I’ve been carrying the Covert Field Scalpel almost daily for over three months now. It has gone with me on about a dozen different hikes throughout the county. I’ve used it for opening boxes and mail, a bit of food prep here and there, and all manner of other run-of-the-mill knife chores.

After using this knife extensively, for the purposes of this review I decided to put the Scalpel through a few deliberate tests.

Some time ago, I picked up a bag full of scrap leather at a surplus store. It makes for great testing material for knife reviews. I tossed a couple of pieces onto an old board and went to work. I started with long, dragging slices through the leather. From there, I tried some push cuts.

The knife sliced through the leather without pulling or hesitating on the slices. It had a little trouble on the push cuts, but not so much that I found it concerning. I then stacked up several of the pieces and carefully pushed the Scalpel down into the pile. Owing to the sharp point as well as the shape of the blade, it pierced through every layer before I quit pushing. 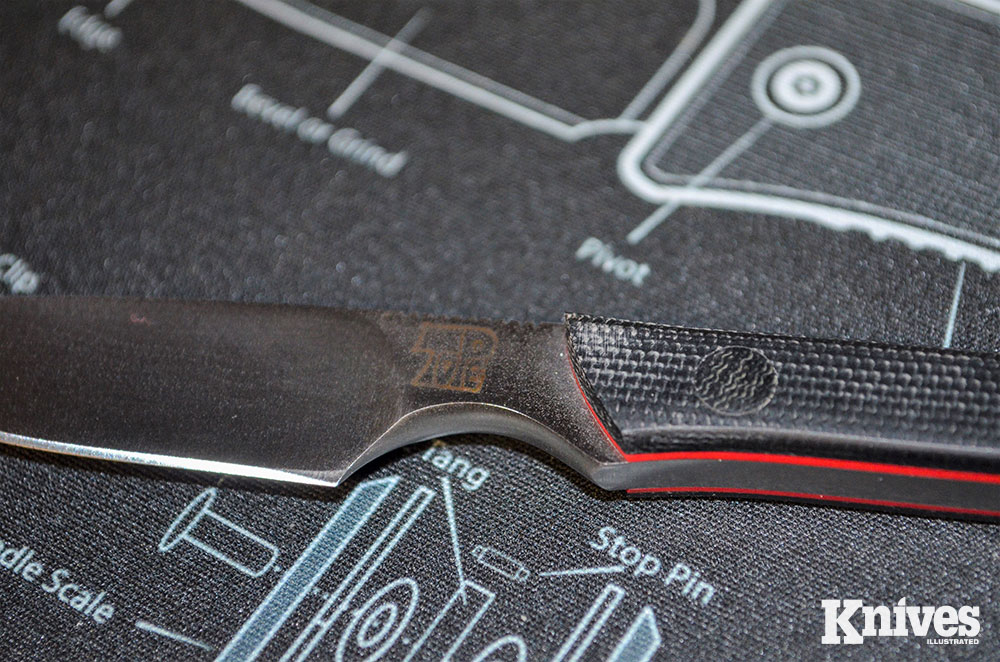 The finger choil is large, with radiused edges for comfort. 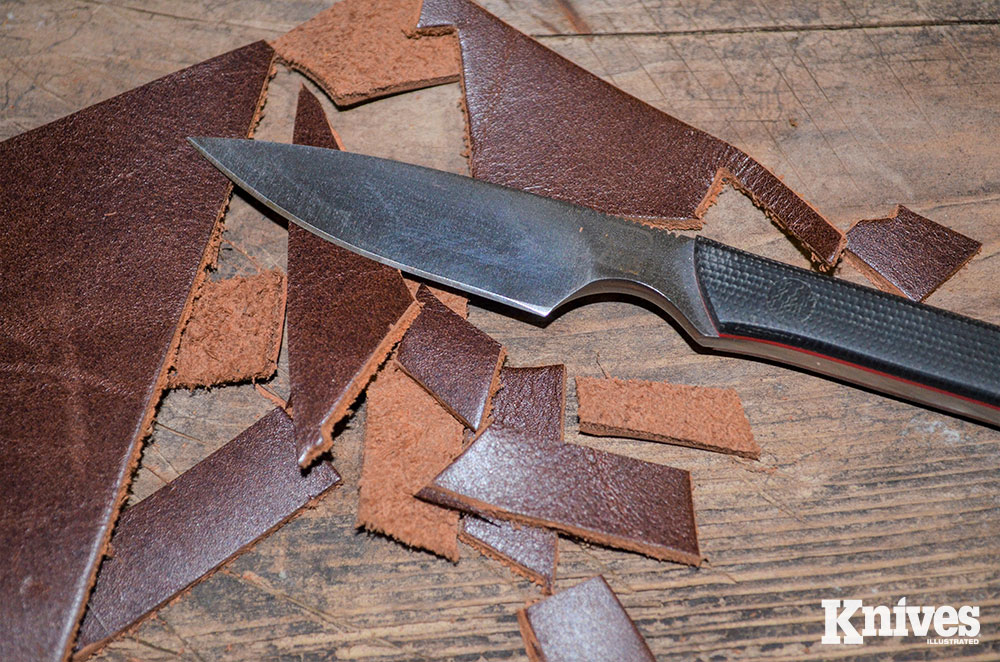 Leather scraps posed little challenge for the knife, though push cuts were more difficult than slices. 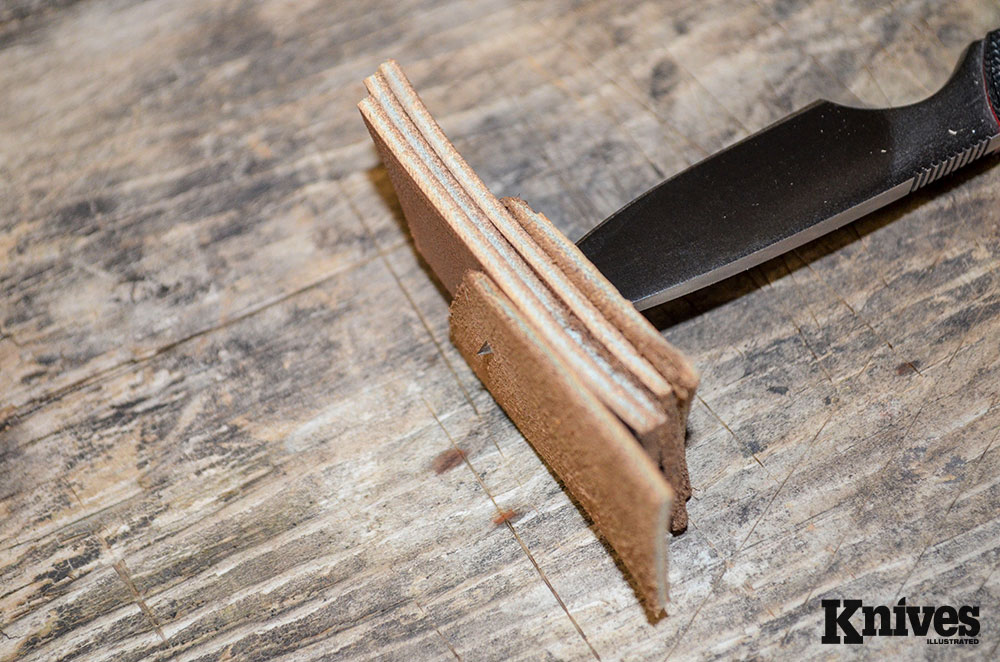 With steady pressure, the point of the Scalpel drove through several layers of leather.

Next, I grabbed a hank of paracord, something that is ever-present in my office. I started by cutting off about a foot or so from the hank. This was cut in half, simply looping it over the blade’s edge and pulling it to cut. Then, I doubled it up and repeated the cut. I doubled it one more time, cutting a full four pieces of paracord at once. This last round took a little effort, but that was to be expected. The Scalpel did fine, though, making clean cuts all around.

Just about every knife I review must do a turn on the kitchen counter. As an EDC knife, the Covert Field Scalpel isn’t something I’d typically use for full-scale food prep, given the short blade. 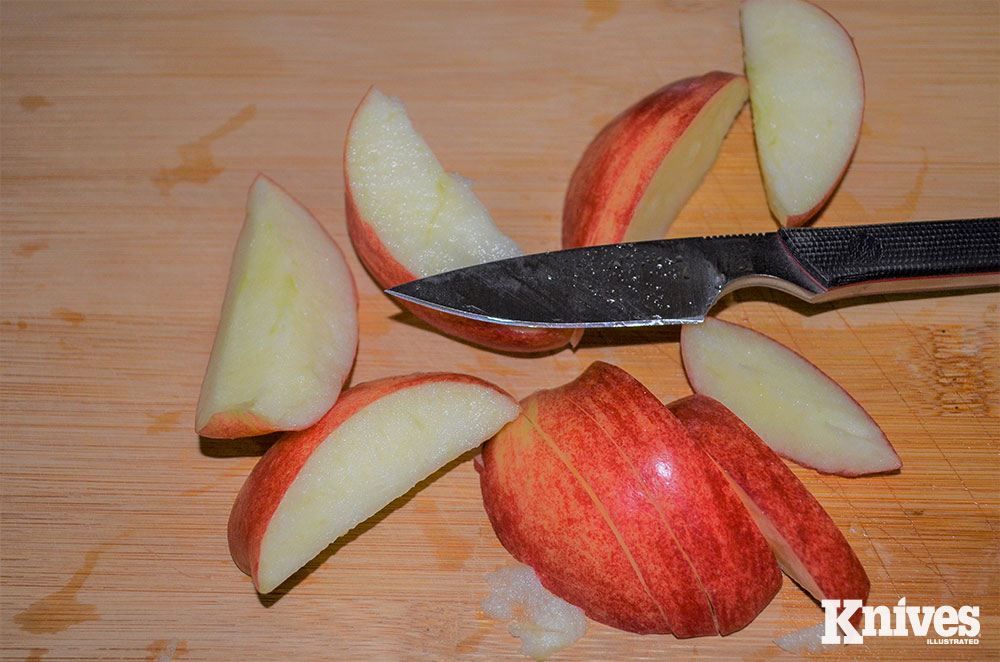 A quick snack was easily sliced up with the Scalpel.

However, I could easily see someone using it to cut fruit or something at lunch, say at the office or out on a work site. So, I grabbed an apple from the refrigerator, something that pleased my wife as I don’t eat nearly enough fresh fruit, and sliced it up.

This was after three months of use as well as the previous tests and I’d not so much as touched up the blade’s edge. It performed flawlessly. The only negative was that even at 3/16-inch, the blade’s thickness didn’t allow for truly precise slices through the apple, not until I’d sectioned it down into smaller pieces. Still, I wouldn’t call that a slight or a drawback of the knife’s design.

I’m telling you right now, I’ve owned hundreds of knives and this one easily ranks in the top five of them all. It is just the right size for many chores around the house, without being cumbersome or awkward in tight spaces. It is the sort of knife that sort of melts into your grip, incredibly easy to manipulate in any number of ways. 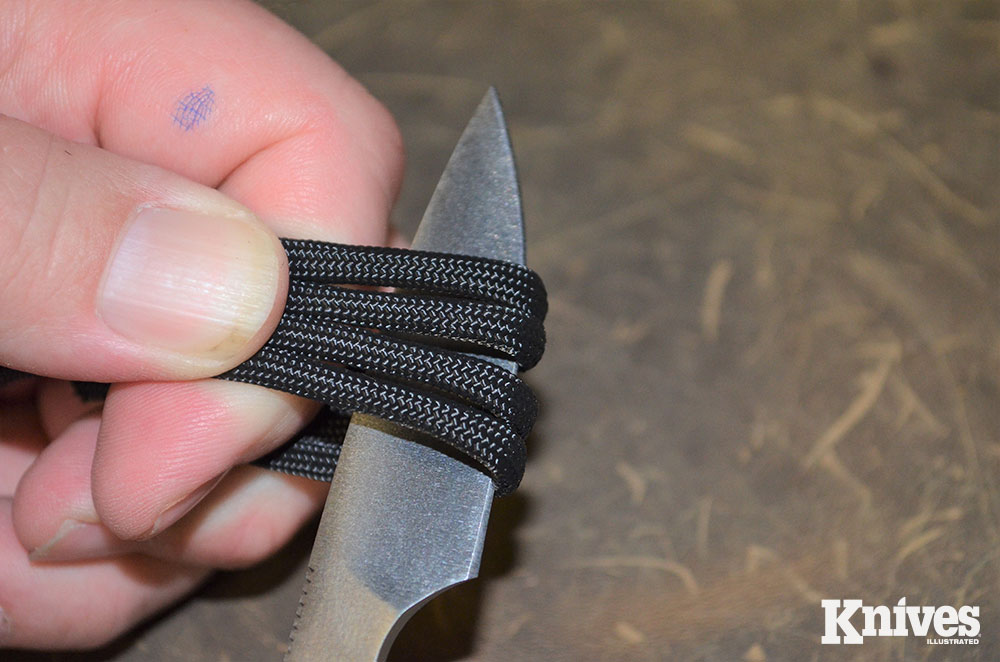 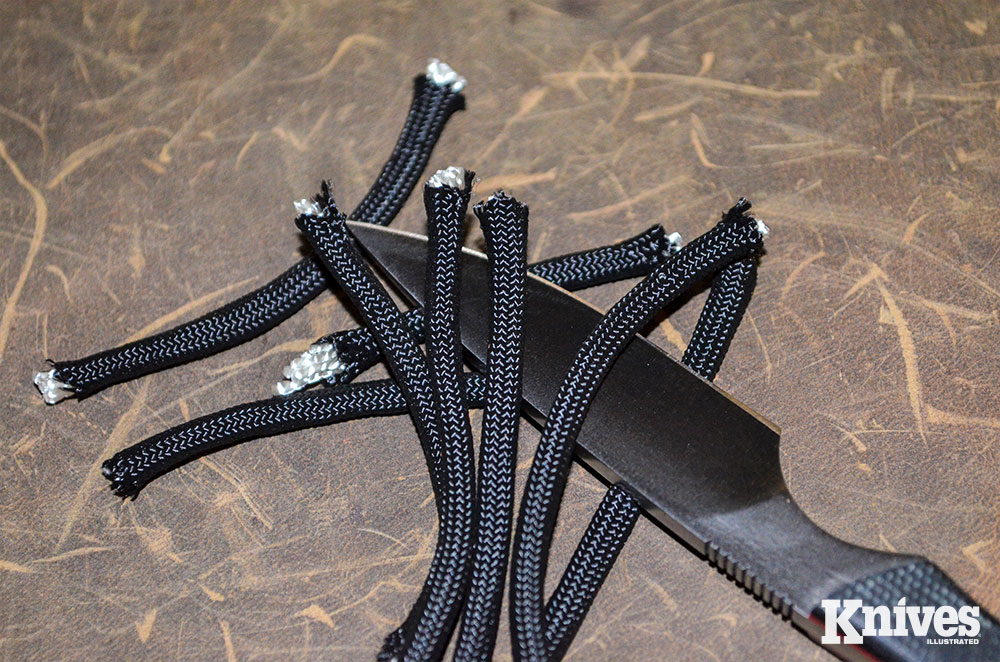 Four loops of standard paracord were cut cleanly with a single attempt.

The Covert Field Scalpel is a great choice for anyone seeking a fixed blade that will fit into a pocket for daily carry. But, you’ll have to find your own as this one is never leaving my collection.

Based in Escanaba, Michigan, Delta Sheath is a premier provider of production and semi-production sheaths. It has a longstanding relationship with a number of knifemakers, including Bark River Knives, Blue Ridge Knives, Parker River Knife, and Rapid River Knifeworks.

While the company offers one-off sheaths and other leather projects on its website, what it refers to as “Therapy Builds” due to the comfort and fun they provide to the staff, it produces a large line of standard sheaths that are distributed through DLT Trading and Blade HQ.

They are available in a few different sizes and a range of colors. If you’re in doubt as to which style or size sheath you need for your knife, Delta Sheath’s experts are simply a phone call away.