I first met Dan back in 2014 during a trip to the Amazon jungle in Colombia with Bushcraft Global. Dan and I immediately hit it off. Our conversations regularly turned to knives — a topic not hard to get either of us on. Dan brought a small sampling of his knives for testing. He provided me with one that I used extensively while there and still own today.

Since then, I find myself going to my Dogwoods more often than not. My Echo-7 is my common go-to bushcraft knife. Now, with the introduction of his version of the Kephart, I think I’ve found a new favorite. It’s based on the design of legendary outdoor survivalist and author, Horace Kephart.

The 9.525-inch overall length of the Kephart is the perfect length for a bushcraft blade.

But looks aren’t everything. I had to find out just what makes the Kephart such a prolific design. Many knifemakers utilize it the world over.

Dan made some minor changes to the production model that he felt Horace Kephart would have approved of. But, the look and feel of the Signature Kephart are almost identical to the original. I had the opportunity to hold and inspect it during BLADE Show 2017.

The 9.625-inch Kephart features a 5.125-inch blade constructed of S35VN stainless steel but is also available in CPM-154. The spear point broadens slightly at the tip, keeping in line with the original Kephart design. That helps increase the cutting power. It also ensures the tip isn’t “too sharply pointed to cook and eat with,” according to Horace Kephart. 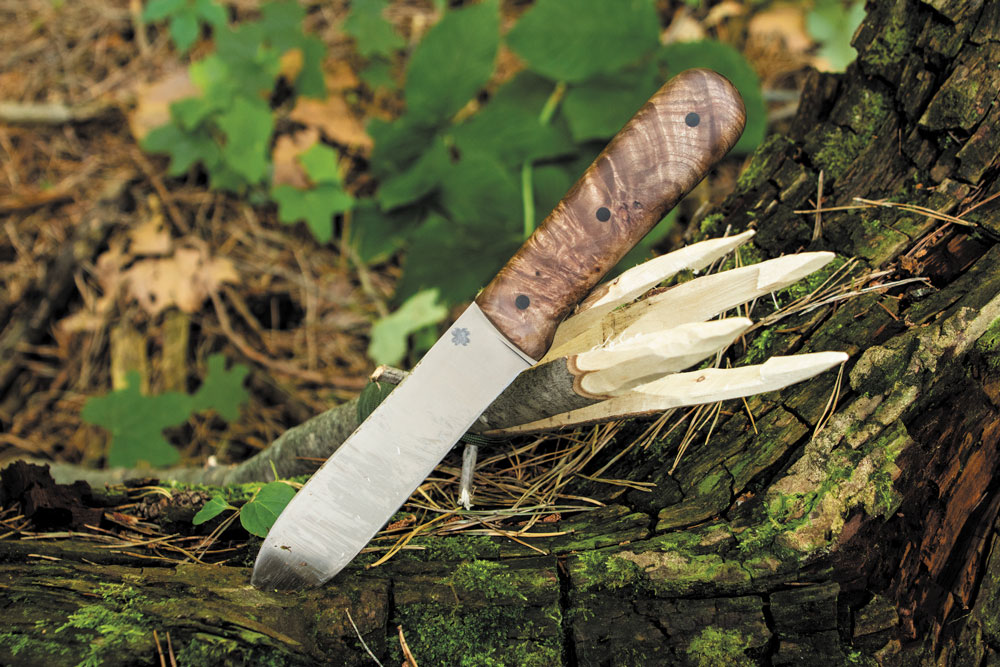 The Kephart was so sharp that whittling down a maple round into a frog gig was really easy. 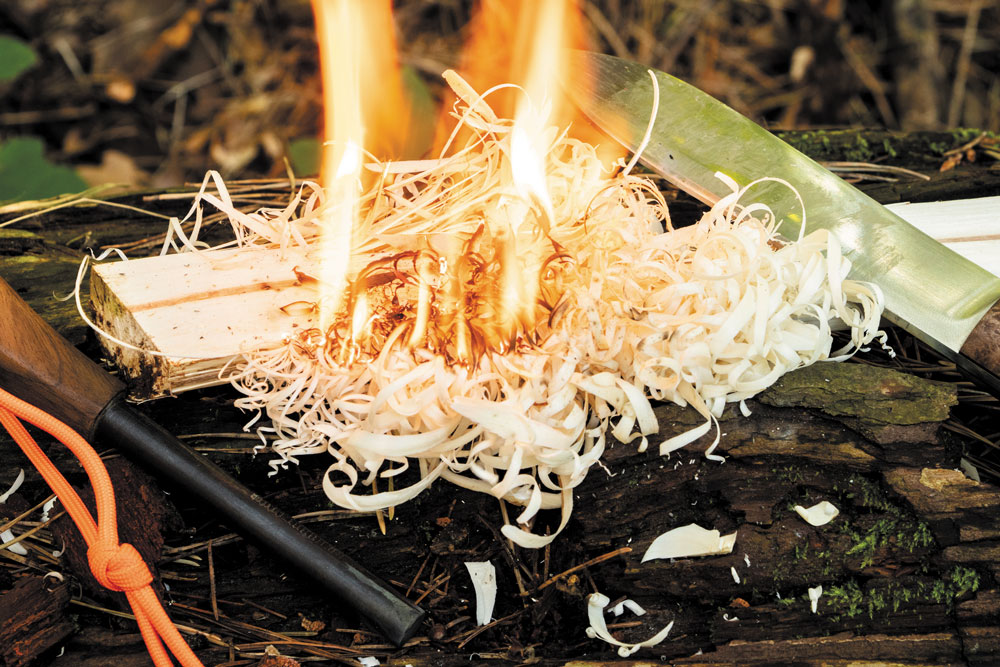 The 1-inch portion of the spine that Dan left at 90 degrees is perfect for striking a ferro rod.

Along the spine of the Kephart is a light swedge that aids in penetration, for tasks such as gutting and skinning large or small game and fish. However — different from the original Kephart — Dan left the first inch of spine at the back untouched. He left the 90-degree angle for things like shaving tinder bundles and striking a ferro rod.

The satin-finished blade features a Kephart grind, which is almost a full-height convex grind with a micro secondary bevel, matching the original Kephart and making it extremely sharp. The absence of a sharpening choil holds true to the original Kephart design, but will make it a little harder to sharpen all the way to the ricasso. 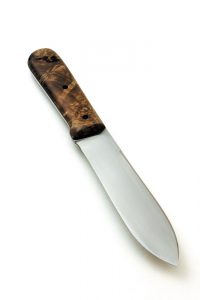 The point of the Kephart broadens at the tip to aid in cutting power and prevent it from being “too sharply pointed,” based on Horace Kephart’s design instructions for his original.

The Dogwood Kephart knife version I received for review came with stabilized burl handle scales, with thin black liners, affixed with natural Micarta pins. The shape and contouring of the 4.5-inch knife handle is very close to the original and is extremely comfortable in the hand even after hours of continuous use.

The original Kephart and the limited run of 10 had a distal taper in the handle and at the tip. Dan opted to forgo that feature with the Signature line for simplified production. With the removal of the distal taper and some weight-lightening holes in the handle for balance, it’s perfect. The Kephart comes with stabilized black walnut shell or Micarta. Dan will do custom scales, like stabilized burl, for an additional cost.

The standard and Signature Line have “Dan Eastland” stamped on the blade flat. On the custom version, Dan stamps “Dan Eastland” on one side and the dogwood blossom on the other. That signifies that it is a true Dogwood custom, the highest level in the Dogwood line. The Kephart doesn’t come with a sheath, but you can purchase a nice belt line leather sheath for $20. It is very well-made and fits the aesthetics of the Kephart beautifully.

It is currently summer here in Michigan as I write this, so hunting was out of the question. However, the Kephart has been hailed as an amazing hunter and this version holds its own in that aspect. The broad tip helps with control during gutting and skinning operations. The keen edge makes fast work of processing your game. It is almost like working with a kitchen knife during food and meal prep. One thing I’ve always believed makes a good hunting knife is its ability to also handle fieldwork. If you’re out hunting, you’re in the field and just one mistake or unforeseen event away from a true survival situation. Not to mention that if you’re hunting the backwoods, you’re probably staying out there for a while.

I used the Dogwood Kephart knife for a myriad of different chores and field tasks, but also wanted to get right down to more serious review and hours of use to check the comfort over extended periods of time. As I often do, started with a frog gig. I could not believe how easily it whittled away the unnecessary wood to find the spear underneath. Due to the wider profile at the tip, it was a bit harder to get inside and shape the barbs. I was able to split it a little farther down, create the barbs, and then just lash it higher up to tighten up the gig. 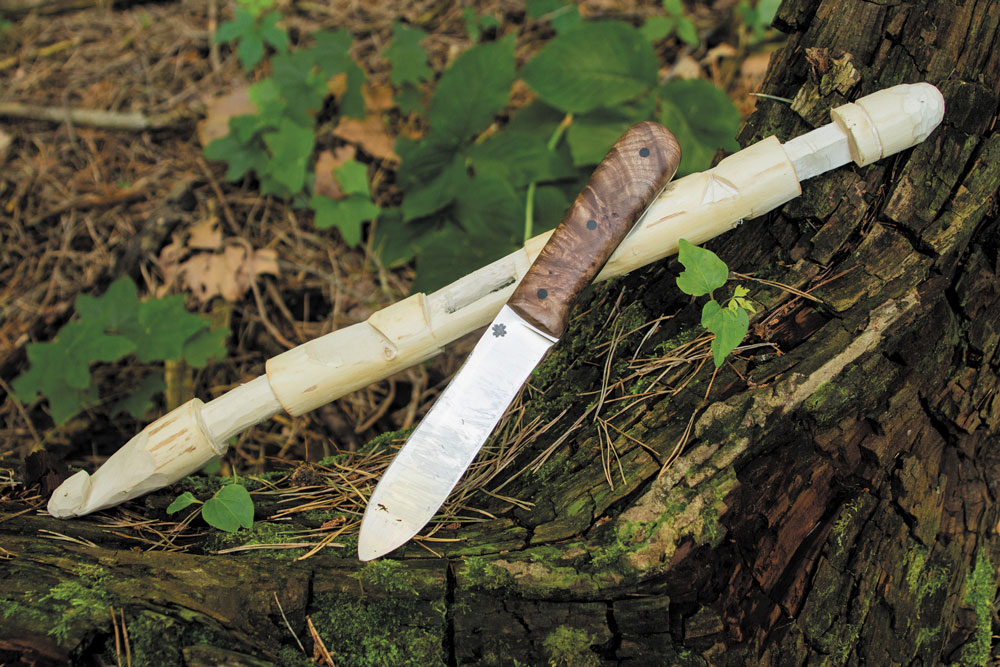 The author discovered no hot spots and felt no fatigue during extended whitling tasks like carving this try stick.

Next, I moved on to messing around with some different cuts, notches, and hooks, working on a try stick. Like the frog gig, the wider profile at the tip makes it tight to get into some of the spots. But I was able to improvise and make it work. Cross-grain batoning for some of the notches and hooks had absolutely no adverse effect on the extremely sharp edge, which went on to make very short work of the maple round.

When it came to fire prep, the Kephart did very well. Although I batoned it easily through smaller rounds to create kindling, the thinner 0.125-inch blade profile didn’t aid much in the splitting as there was no presence of any kind of wedge behind the blade provided by a thicker stock. But I was perfectly fine with that because I was still able to split the wood all the way and the tradeoff of such a keen edge was well worth it. The edge geometry and thinner stock made for very fine curls on my feather sticks, even after all of the other work I had done with it. It is a very robust blade with great heat treating. 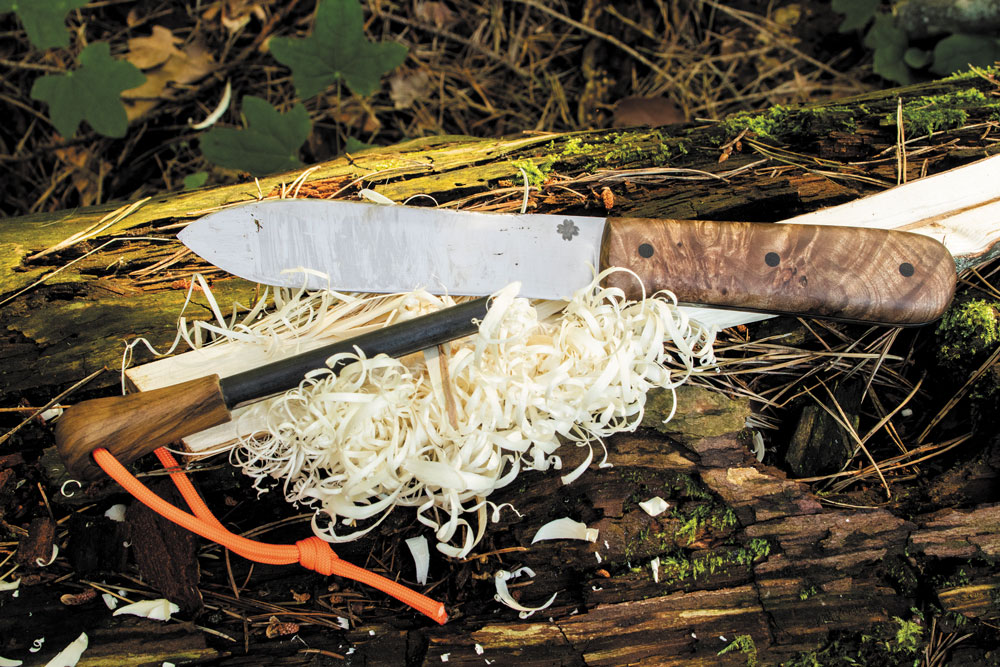 Even after all the work he had done with it, the Kephart maintained an incredible edge. The author got some very fine curls on the feather sticks.

After hours of using the Kephart, I experienced no hot spot development or fatigue. This knife design allows prolonged, comfortable use.

When Dan first told me about this project, I could barely contain myself. The Kephart is one of those knives that until recently, never really received the credit it deserved. It has never been the most beautiful knife, but it has always been a very functional knife. It was designed by someone who cared less about looks and more about elegance in performance. But there has been a resurgence in interest over this design in recent years. That’s mostly due to the opportunity to see an original Kephart and digging into the finer details of this historical blade.

Dan Eastland at Dogwood Custom Knives took the opportunity to truly investigate one of the original Kepharts and make a knife that Horace Kephart himself would have been proud to carry. He got it right in every way that matters. If you’re looking for a knife designed from extensive experience and field-tested by one of the founding fathers of bushcraft, you need to move the Dogwood Kephart to the top of your list. 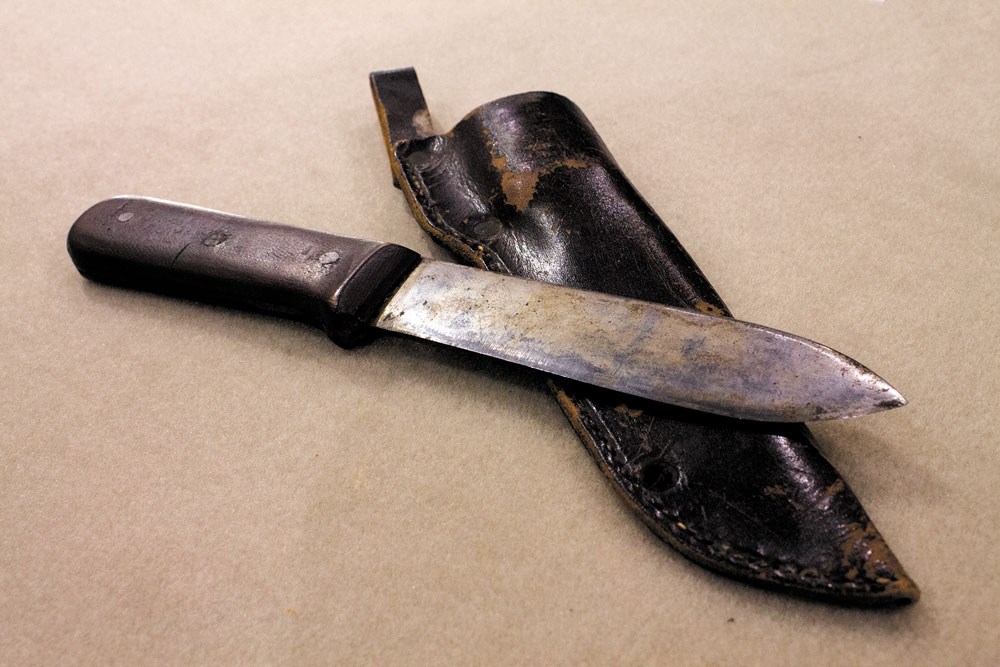 At BLADE Show 2017, I was able to hold and inspect one of the original Kephart’s still in existence today from the private collection of Ethan Becker. Dan Eastland told me of his plans to re-create it in a limited run, but I had no idea what he really had planned. His friend Ethan Becker provided him access to his original Kephart, and with a micrometer, Dan set about the task of re-creating the original Kephart to exact specifications. Shortly before BLADE Show 2018, I ran into Ethan and asked him how it turned out. He replied, “Well, it doesn’t suck,” which could only mean that it was amazing (you have to know Ethan). The first 10 are spot-on reproductions and I’m honored I saw them. Although they went quickly, Dan donated one to the Mountain Heritage Museum. Once he finished the initial project, Dan turned his sights to a slightly customized and production-friendly version. The Signature edition, available on his website, follows the same design cues as the original 10 with a few minor adjustments that Dan felt Horace would have approved of.

Be sure to visit us online here, on Facebook and on Instagram. We’ll keep you up to date on all the happenings around when it comes to knives.