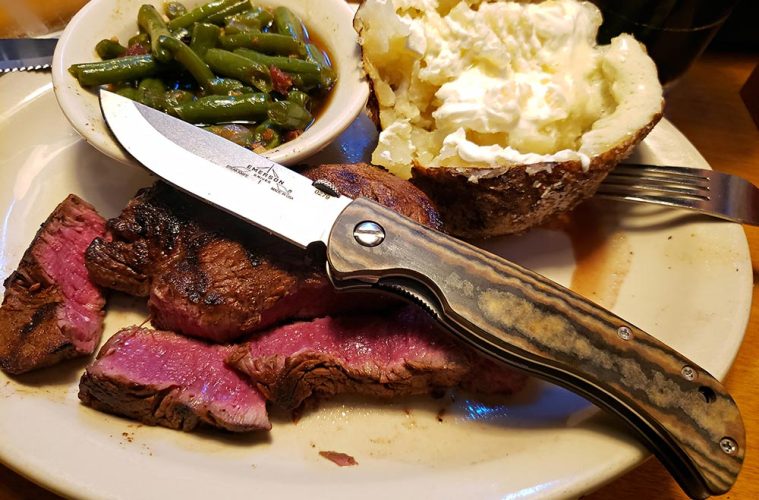 I suspect we’ve all been there: You’re out to eat and you order a nice steak, only to have to saw through it with the crappy knife-shaped object that the restaurant provides. Your options are to persevere and continue to mangle your delectable entrée, or resort to your EDC knife, which you know will do a better job.

Honestly, I’m all for the latter and have done so on many an occasion, including at SHOT Show dinners in Las Vegas at some pretty high-end steak joints. With that said, depending on how scary your EDC knife is, you risk horrifying your date, the wait staff and the folks around you. To maintain domestic tranquility, and minimize law enforcement involvement during dinner, there has to be a better option.

Luckily there is, and Ernest Emerson has come up with it in the form of his Folding Steak Knife. The FSK, as I’m going to refer to it, gives you an option that will fulfill an EDC’s role—even a tactical role—and still do a yeoman’s job on your fillet without raising too many eyebrows at the dinner table. 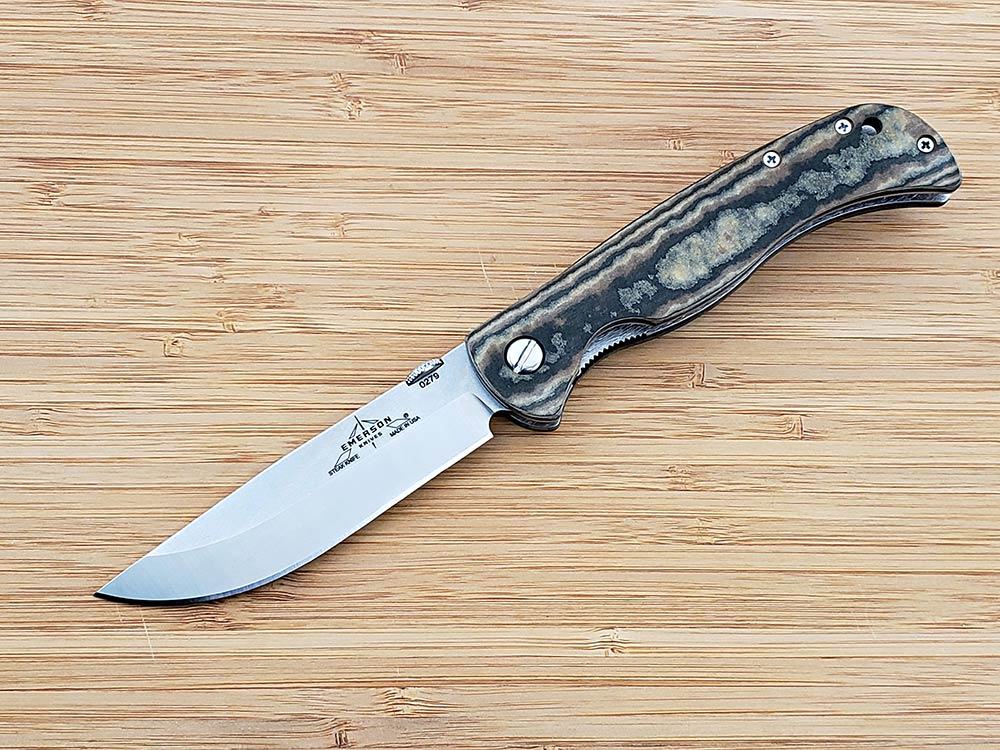 As the name implies, this Emerson blade is a portable version of the ubiquitous carnivore’s dinner tool. If the lines look familiar, it’s probably because Emerson had a fixed-blade steak knife following the same lines that came before this.

The Folding Steak Knife has a very similar design; it just turns into a folding package to make it a little easier to carry around.

The FSK has a 3.875-inch drop-point blade of 154CM stainless steel. It has a flat grind with a secondary bevel and comes in plain edge only. This model has no serrations; that would defeat the purpose of a clean-cutting meat-processing tool. An ambidextrous thumb disk is mounted to the spine of the blade. 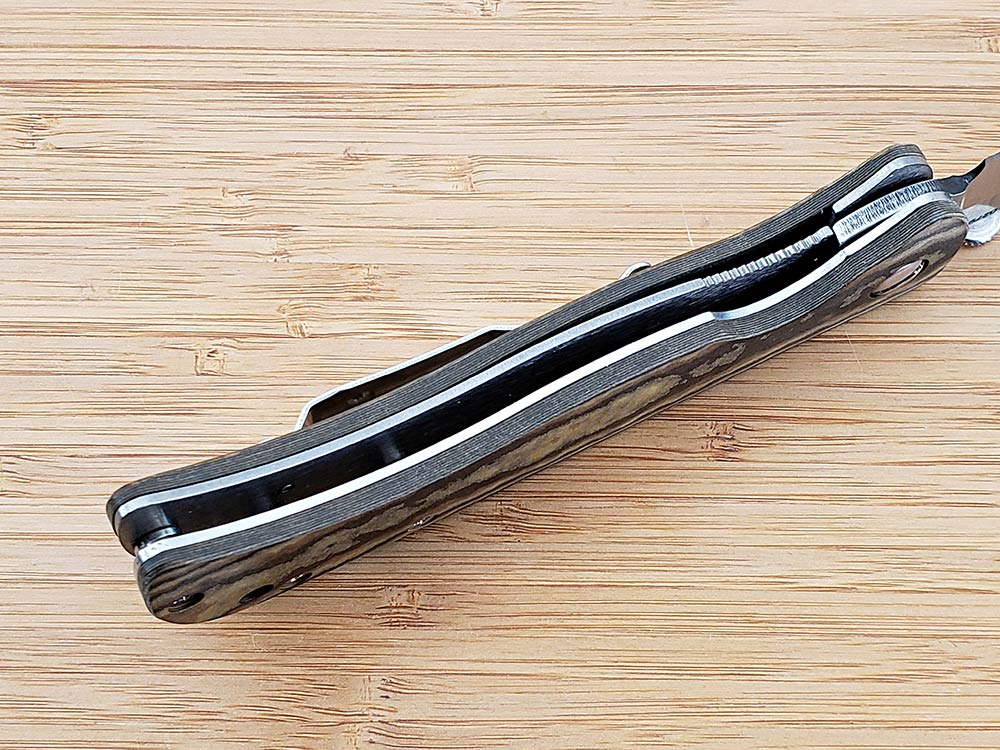 The handle is a generously sized 4.875 inches and well contoured for comfort. The frame and liner lock are made of titanium for both strength and weight reduction. Handle scales are available in either black G10 or a brownish Richlite material. Richlite is a form of paper Micarta. Check out the sidebar for some more details on it, but know that it’s attractive and comfortable in the hand. There’s a pocket clip mounted for tip-up, right-hand carry. If you like left-hand carry, you can get the scales drilled and tapped for that option for an additional fee. There’s also a lanyard hole near the pommel of the knife.

The FSK uses an open-frame design, which, in conjunction with its stainless steel and titanium construction, makes it easy to clean up. That’s an important feature in a knife geared towards food processing. 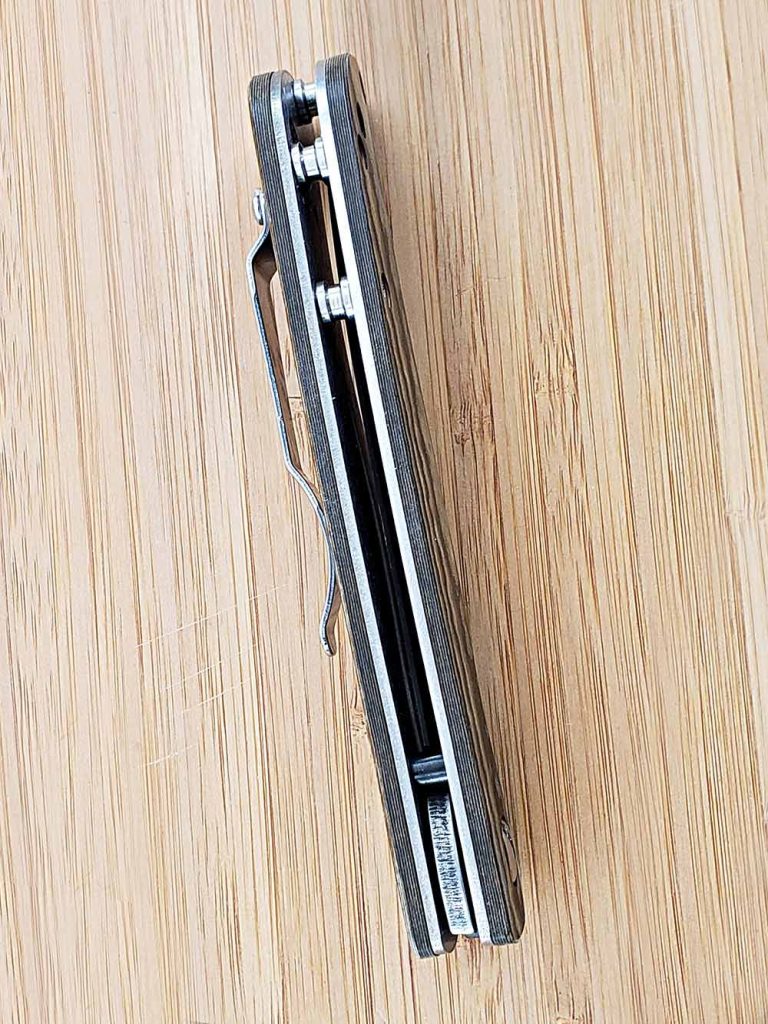 Emerson uses an open-frame design that keeps debris from building up in the knife and that makes it easy to clean. An important consideration in a knife intended for use with food.

It didn’t take much to get me to do a proper field test on the Emerson Folding Steak Knife. I gave it the first run at home on some round steaks that my wife made for dinner shortly after I got the knife. It cut through these smaller, inch-thick-or-so steaks with no difficulty at all.

“The ease with which the blade glided through the beef, and the control I had with the handle reminded me of using a full-sized carving knife…”

We typically use serrated Victorinox steak knives at home and, honestly, they work pretty well. With that said, I saw a noticeable difference with the Emerson. There was no sawing needed, simply firm, even pressure as the blade sliced cleanly through the steak. The edge held up fine, too, even with repeated contact with the ceramic plate. There was no edge deformation or dulling noticed. Not that I really expected it with this knife, but it was still worth checking. 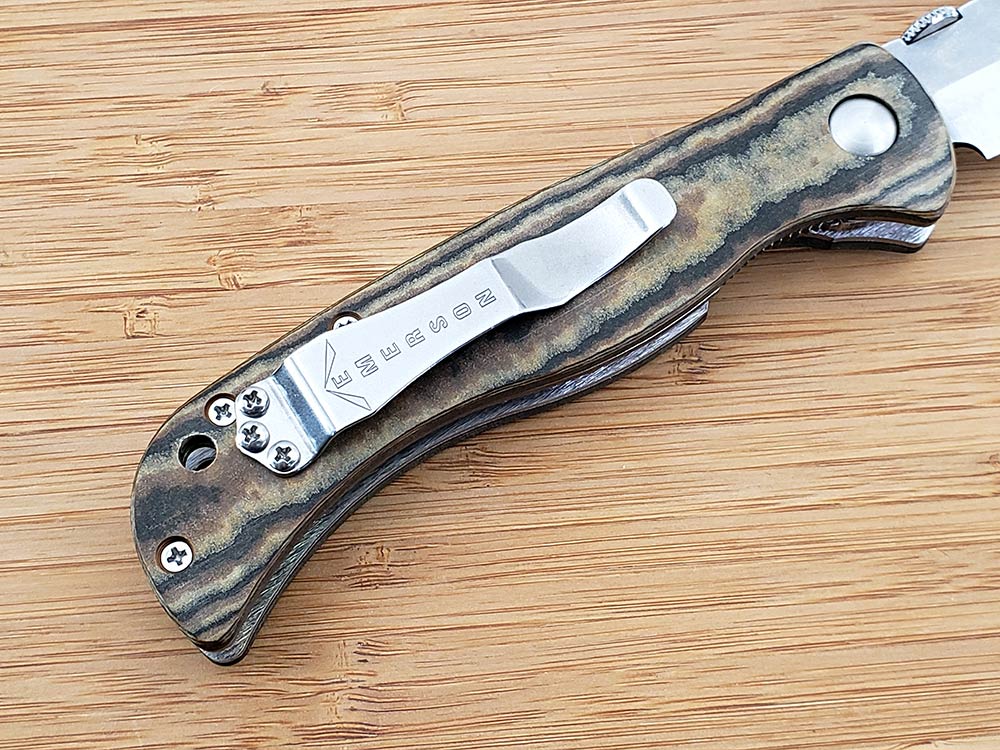 The FSK is equipped with a good pocket clip setup for tip-up, right-hand carry.

The next run out was at an actual steak house. This was the test for a thicker fillet and also a public debut. Plus, it was an excuse for me to go out for steak—for science. I checked out the provided cutlery once we got seated and was slightly surprised to see that it was a Brazilian Tramontina steak knife. Better than the expected Chinese type, but still the same blunt-tip, thin, serrated model you’d otherwise expect. I used it to butter my rolls. With only a slight eye roll from my wife, I pulled out the Folding Steak Knife in preparation for my meal. Our waitress caught me taking pictures of my knife, but seemed unfazed. She probably knew their knives suck, too.

When my fillet arrived, I did a test cut and was pleased to see it was cooked perfectly: seared on the outside with a cool, rare center. I already knew the folder cut well, but when I was cutting up my steak, it hit me with what it reminded me of: a good carving knife. The ease with which the blade glided through the beef and the control I had with the handle reminded me of using a full-sized carving knife on a beef roast or turkey. To me, that was a perfect testament to the Emerson design. A pocket-sized knife that handled like a carver is right on point for what a Folding Steak Knife should be. 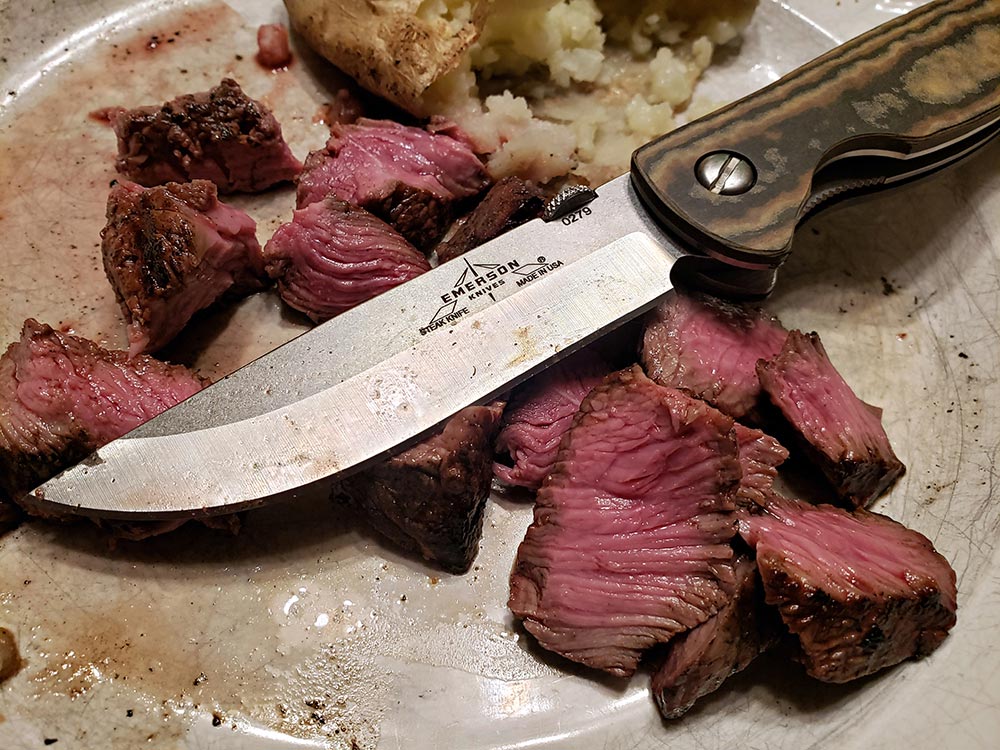 The author conducted rigorous field testing of the Folding Steak Knife in its natural environment.

As nice as that would be, we can’t eat steak all of the time. So, unless you reserve your Emerson only for trips to the steak house, you’re going to have it in your pocket for a lot of day-to-day activities, too. Although the FSK is a fair-sized knife, it has a relatively flat profile and carries easily in the pocket. The clip slides over the pocket lip easily and provides just the right amount of tension for good retention, yet makes the knife easy to draw. About ¾ inch of handle sticks up out of the pocket. This gives you something to grab onto when drawing the knife.

“If you’re a foody and appreciate fine cutlery that won’t mangle your dinner, then the Emerson Folding Steak Knife is just the tool for you.”

The Richlite scales not only look nice but also feel good in the hand. They’re smooth, but the contours of the handle ensure you have a solid, comfortable grip. There’s a warmth to them as well that reminds me more of wood than of a composite. The opening disk was something I haven’t worked with much before. I am more used to a hole, traditional thumb studs or a flipper. It took a little practice to roll the blade open with one smooth motion, but it’s just a matter of getting used to it. It’s a great ambidextrous opening option and low profile. 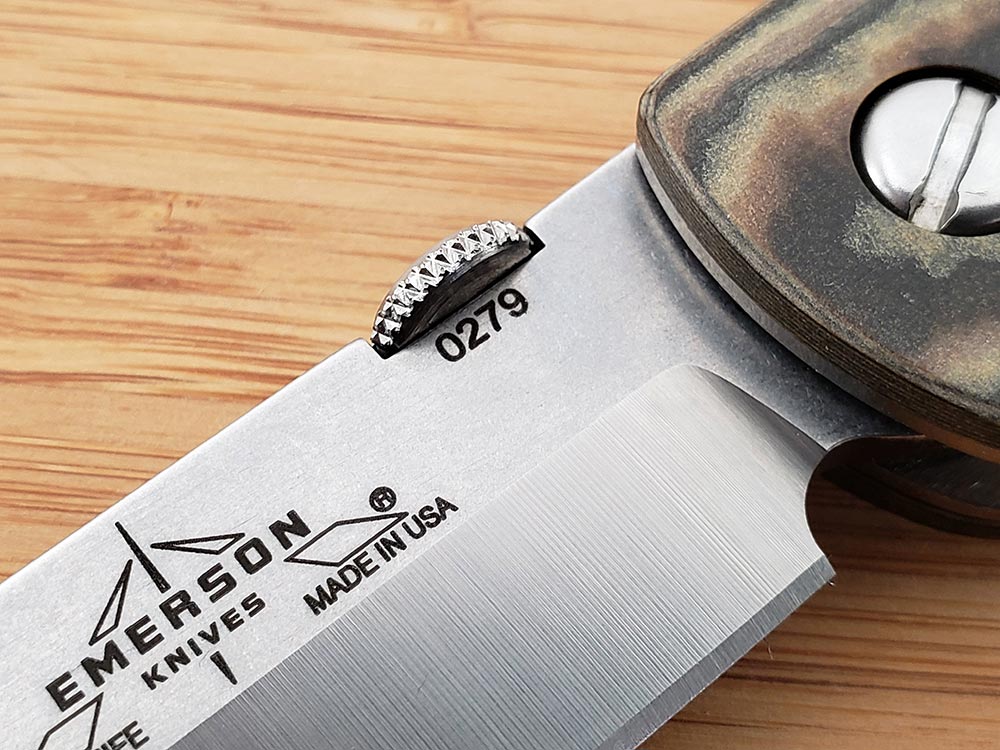 Opening is by means of an ambidextrous thumb wheel mounted to the spine of the blade.

The titanium liner lock engages solidly when you open the blade. I can’t detect any blade play of any kind. It’s a typical right-hand-oriented lock, but I didn’t have any issue disengaging it with my left hand either, although this did involve rolling the knife to the side a bit to get to the lock. If you’re a lefty, you’re probably used to it.

Although there’s a slight drop to the point, the blade profile reminded me a lot of a Scandinavian Puukko, meant for camp-type tasks, I actually felt that the FSK handled much like one. It’s a great size for a folding hunter or woods knife and would fill that role nicely. It should go without saying that the FSK can still work as a tactical knife as well. It’s fast to deploy, rugged and has a great edge. It’s an Emerson, after all. 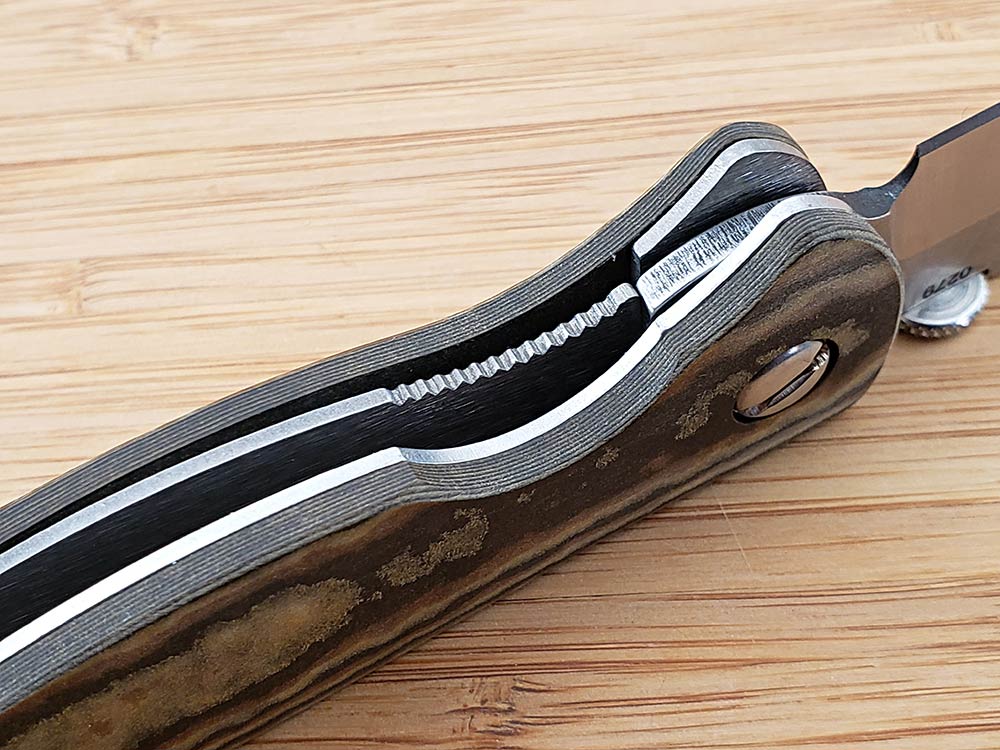 Lock-up is by means of a very solid titanium liner lock.

So, did the Folding Steak Knife live up to its mission statement? I’m going to say absolutely. It worked great on steaks and did so without causing any commotion at the steak house. The place was packed when we went, and we waited forever to get in. Even in close quarters with folks right on top of us, no one—including our waitress, numerous other wait staff and a manager—either noticed or was alarmed by the Emerson sitting on the table. I also think it’s worth it to upgrade to the Richlite handles, as they have a less “tactical” look than black G10, and they’re nice scales to boot.

If you’re a foody and appreciate fine cutlery that won’t mangle your dinner, then the Emerson Folding Steak Knife is just the tool for you. Perfect for dinner at 6:00 while still capable of fending off muggers at 7:00. KI 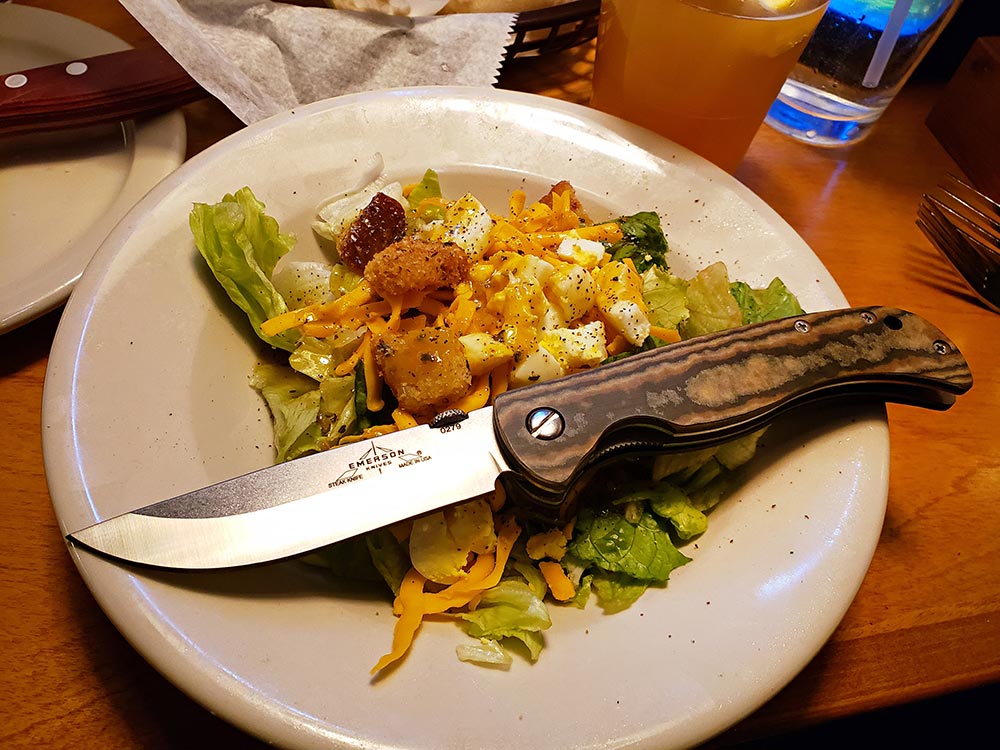 The author trying to figure out what to do with the salad they gave him at the steak house. 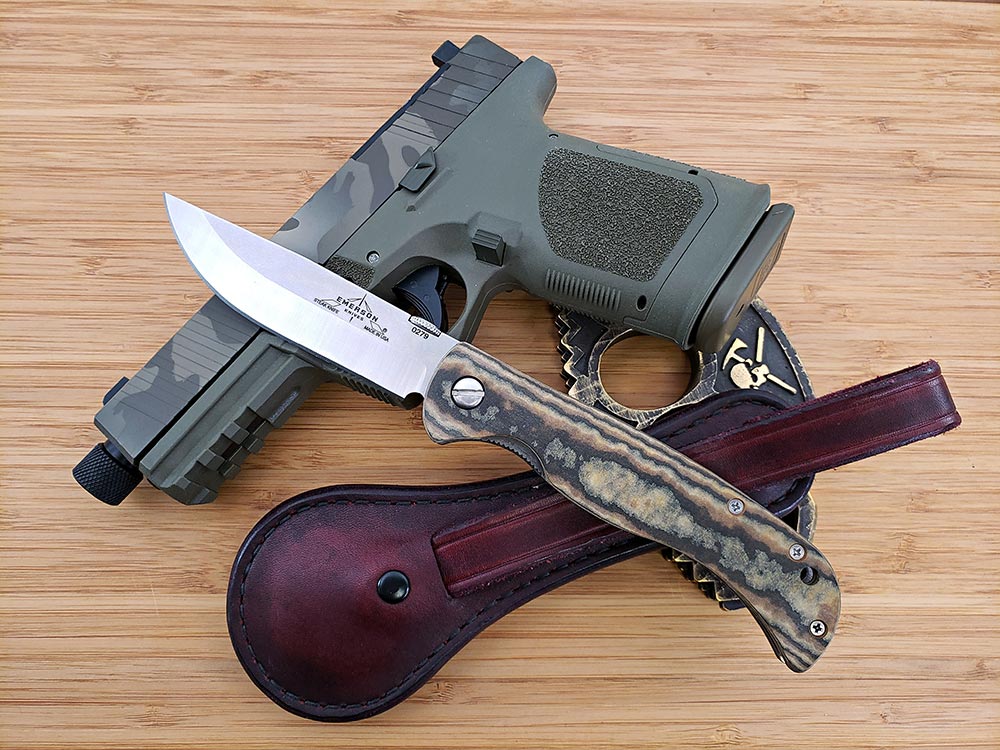 While designed with steak in mind, the Folding Steak Knife is still an Emerson and will hold its own in a defensive, tactical role.

WHAT THE HECK IS RICHLITE?

If you already know what Richlite is, then you’re one up on me. I had to look it up. It turns out that Richlite is nothing new. In fact, it’s been around since 1943. It just hasn’t been used much with knives. Richlite is traditionally a material used for countertops and cutting boards.

In composition, it’s essentially a paper Micarta. According to Richlite, the material is made up of layers of high-quality, recycled, engineered paper that’s infused with thermosetting resin.

The stacks of infused paper are hand-laid with the direction of the paper fibers alternating, which adds strength and texture to the material. The paper stacks are then pressed under heat and pressure to bond the layers of paper together. The panels are then left to cure and cool, creating a sheet of dense, solid material.

The material is similar to the PaperStone that Buck uses, or other paper Micartas more commonly seen in knife handles. The exact formula of each material differs a bit but it’s the same family of product. It makes for an extremely durable material with impressive high-impact resistance.

The Richlite that Emerson uses has a distinctive look with its layered appearance and contrasting lighter and darker layers. It’s smooth, but there’s a subtle texture to it that gives a secure feel in the hand.

There’s also warmth to it that seems closer to a wood product than to a synthetic one to me. I guess that makes sense being that it’s made with a paper product. The use of Richlite over other more common handle materials is an interesting choice by Emerson, but I think it is a good one. It’s an attractive product that should hold up well and, considering its kitchen-related lineage, seems like a perfect fit for a steak knife.

A version of this article first appeared in the March/April 2023 print issue of Knives Illustrated Buyer’s Guide.