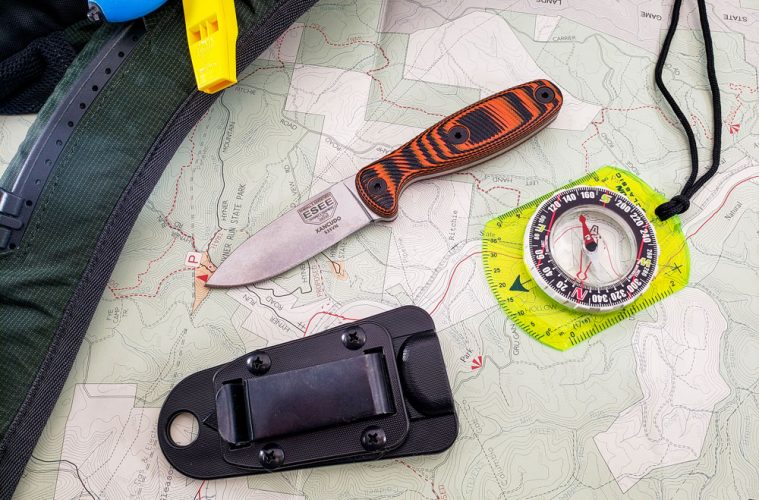 The folks at ESEE Knives know a thing or two about what works in the field. They should, because they use their knives while teaching, doing search and rescue work, hiking, backpacking, camping, hunting, and shooting.

When you pick up an ESEE knife, you know it’s a tool that’s been designed by people who’ve actually used the tools and field-tested them before they’re offered for sale to the rest of us.

In the case of the new Xancudo, it’s had a double dose of that testing process, as the design first came to fruition as the Zancudo folder before being transformed into the current fixed-blade version. 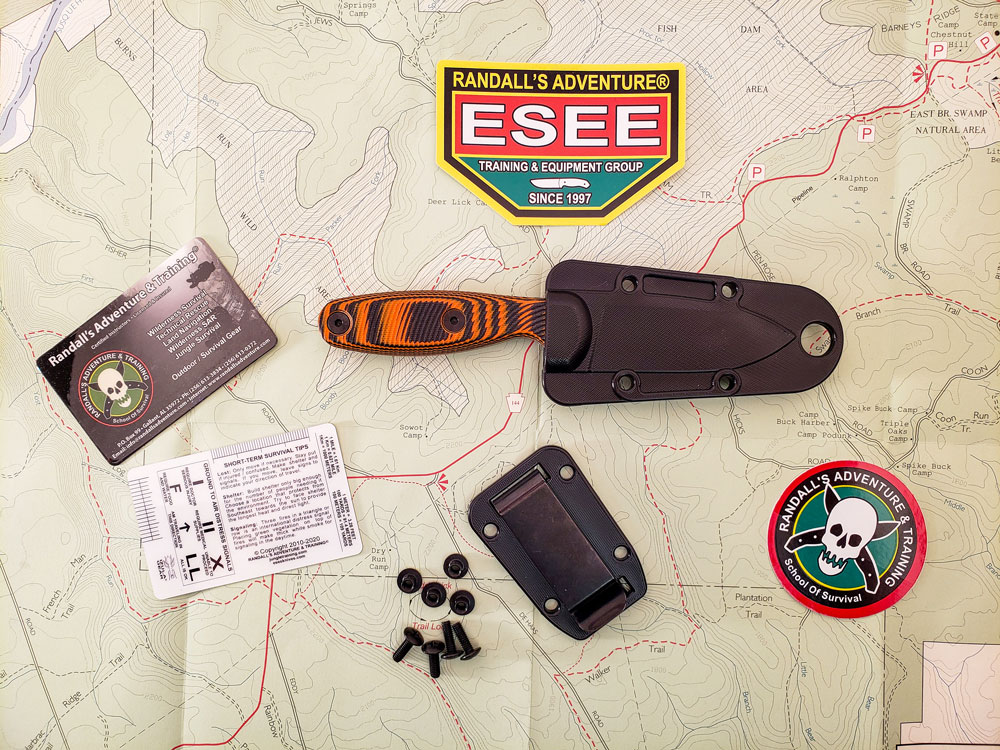 The Xancudo ships with the knife, a polymer sheath, an optional belt clip, and some nice extras, like ESEE stickers and a handy survival card.

I’m a fan of folders, but when I hit the woods, I prefer the strength of a full tang, fixed-blade knife. Enter the Xancudo. It’s basically the same size as the ESEE Zancudo folder when open, and it mimics its blade shape and handle design.

It has a 3-inch, drop point, flat ground blade of Crucible Steel’s S35VN stainless steel treated to a tough 59-60 Rockwell. The blade has a stonewashed finish and is etched with the ESEE logo and model name on one side, and the Rowen name and logo on the other.

“When you pick up an ESEE knife, you know it’s a tool that’s been designed by people who’ve actually used the tools.”

Handle scales of orange-and-black layered G10 that use ESEE’s new 3-D contouring provide more texture for a superior grip. It comes in two handle options: a basic solid grip design and one with a large hole suitable for clipping a carabiner through for extra security for climbers or mountain rescue teams.

Overall length is 7.12 inches and weight is 6 ounces with the sheath. While the ESEE team does the design work and prototyping, the actual knives are made for ESEE by Rowen Manufacturing in Idaho Falls, Idaho.

Speaking of the sheath, the Xancudo comes with a molded polymer sheath that the knife clicks solidly into. The sheath has a large hole for attaching a neck cord, and four holes that can be used as lashing points or to attach the provided metal belt/strap clip.

ESEE gives you some extras when you buy a knife, too. In the box with the knife were a pair of ESEE stickers, and a plastic business card with some handy survival and signaling tips on the back. 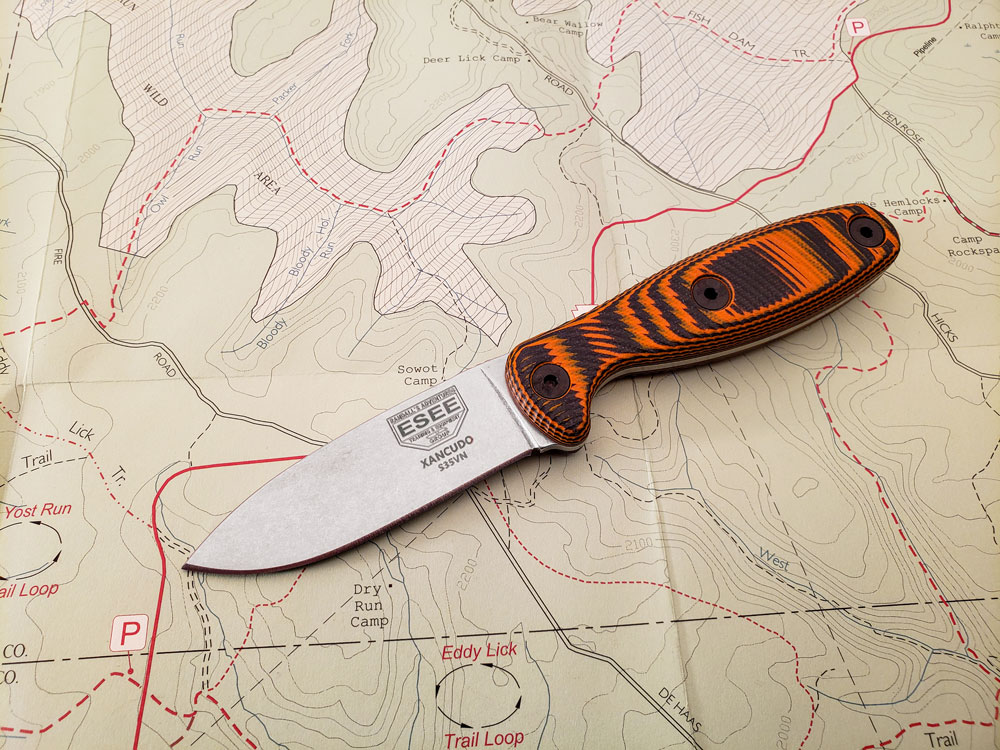 The Xancudo is a compact 7.12 inches in overall length, making it quite useable as a neck knife or attached to a pack strap. Its 3-inch drop point blade is made from Crucible’s S35VN stainless steel. 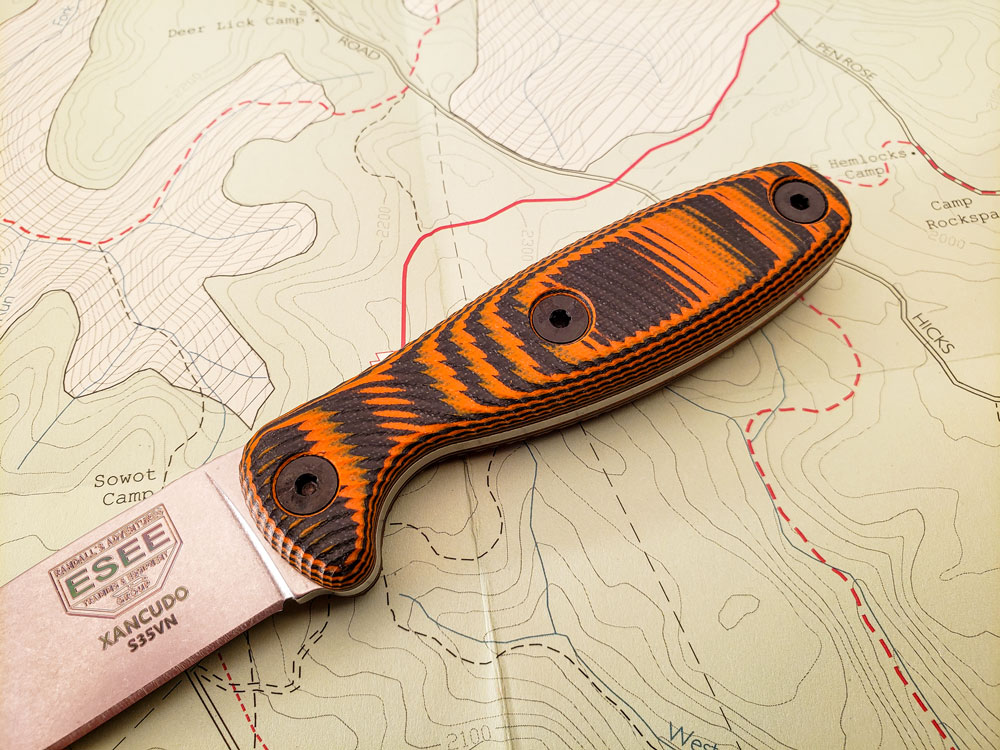 ESEE mentions in the product description that the Xancudo would make a good choice for search and rescue teams that could make use of a compact, lightweight knife with a keen edge for cutting rope and webbing that could still be used for basic survival needs and fire starting.

They’re spot on with that assessment, which makes sense considering their team’s background. The same attributes make it a great knife for hikers and backpackers, too.

It’s not an ultra-light blade, but it’s compact and reasonably light, while still giving you a solid heft to know that you have a substantial tool at your disposal. It certainly wouldn’t be out of place as a hunting knife either.

The sheath allows for a variety of carry options. If you want to use it as a necker, the big hole at the bottom makes for a perfect attachment point for cordage or chain. You can also use the four holes as lashing points to zip-tie or lash it to a pack or bag, or even onto a bike, snowmobile, or ATV.

Attaching the provided clip only takes a couple of minutes with a screwdriver, and that opens you up to belt carry either on a trouser belt or a pack’s waist belt. You can also clip it to a pack strap or other attachment point.

A set of well-melted thumb serrations on the knife’s spine provides a nice balance of traction without being overly aggressive.

ESEE provided myriad ways to carry the Xancudo, so you can find a way to carry it no matter what.

The new 3-D scales have a good feel to them. They provide a secure grip but lack any sort of sharp edges that would cause hot spots or irritation during use.

The grip is 4 inches long, and I can just get my mid-sized hand on it comfortably. The built-in finger groove on the grip keeps your hand safely away from the blade. In a traditional saber grip, your thumb falls naturally on the knife’s spine and a set of serrations is there for your thumb.

The scales provide a spot to provide some leverage for harder cuts, but they’re “melted” enough that they aren’t sharp. It’s one of the better sets of thumb serrations I’ve seen on a knife. 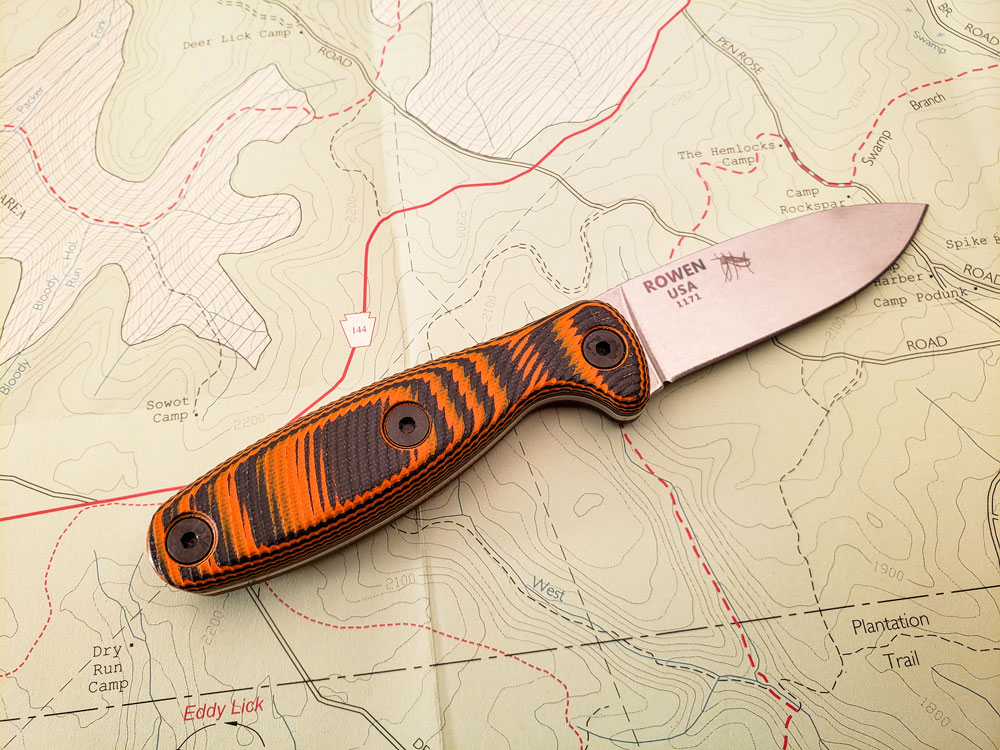 The 3-D handle scales on the Xancudo are well contoured, comfortable, and securely attached with a trio of Allen head bolts. The grooved texture makes for a positive grip, but all edges are well-rounded or melted to eliminate any hotspots during use.

The S35VN blade came with an excellent factory edge that would pop hair and hold up well under testing. I cut cardboard, sisal rope, webbing, and plastic packages and didn’t see any noticeable deterioration in the edge throughout that use.

The entire Xancudo package is very weather resistant due to the stainless construction, G10 handle scales, and polymer sheath. The sheath doesn’t have an obvious drain hole for water, but I did notice a gap inside the large neck cord hole at the base of the sheath that would serve the same purpose.

While you still should maintain all of your blades, it’s nice to know they can handle some foul weather while you’re in the field. That’s especially true of a knife that is geared toward search and rescue crews. 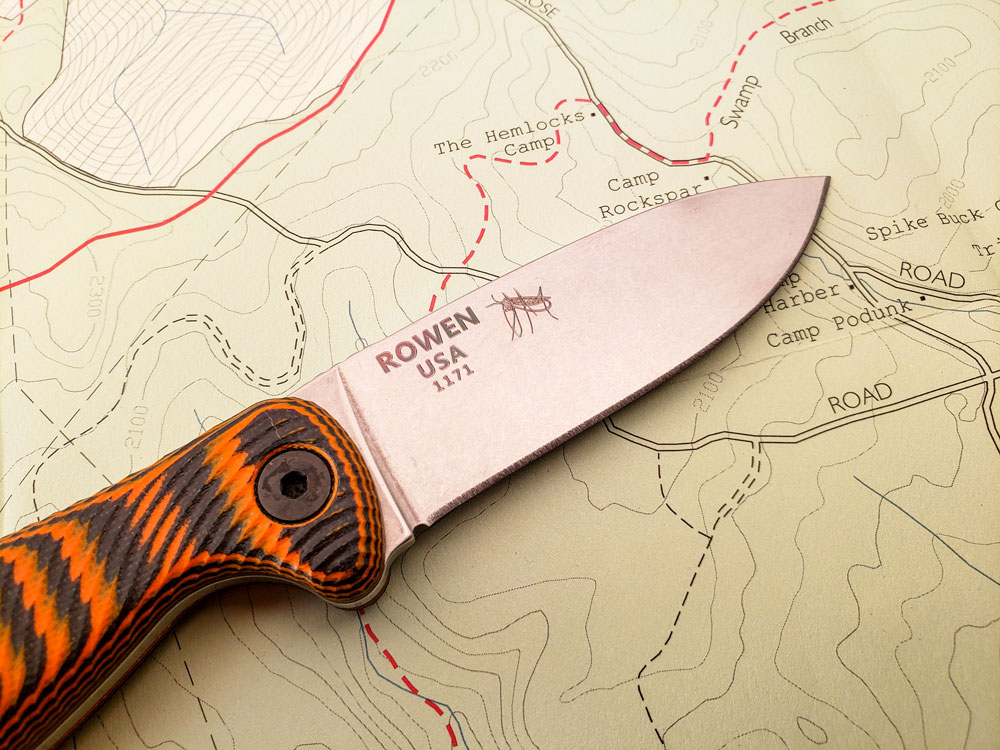 ESEE’s blades are made in the USA by Rowen Manufacturing out of Idaho and proudly stamped as such on the right blade flat.

The Xancudo is a well evolved design that takes lessons learned with Zancudo folders and transfers them to its rigid, fixed-blade sibling. While the Xancudo is compact enough for EDC carry, I’d still be tempted to grab a folding Zancudo to pair with it to have some consistency for times when a folder is still more convenient.

The Zancudo is a project between ESEE and Blue Ridge Knives so they aren’t sold directly by ESEE, but they are available through a number of other knife shops and dealers. They’re quite affordable too with an MSRP of $48.95.

If you want the strength of the fixed blade design, the premium S35VN steel, and new 3-D pattern handles, then the fixed-blade Xancudo is the way to go. The folks at ESEE took their personal experience and distilled that down into a compact, supremely functional tool well beyond its weight class. 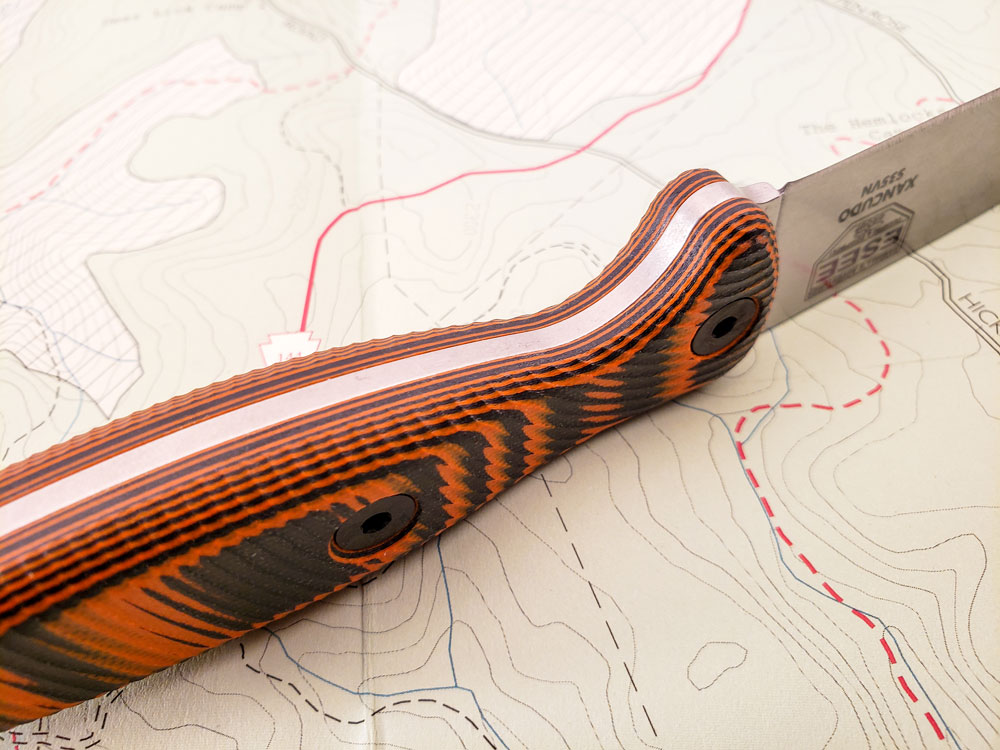 A large finger notch is incorporated into the grip and keeps the hand safely away from the blade during use.

A Warranty to Beat All Warranties

ESEE stands behind its products. It knows that folks who buy the company’s knives are going to use them, and even abuse them. The warranty is really simple: If you break it, ESEE will repair or replace it. Period.

While I’m sure the crew shakes their heads at some of the stuff that comes back to them, it’s a no-questions-asked warranty, and they hold good to it no matter what you did. The warranty covers the knife itself for its lifetime, too, so it’s transferable if you sell or give a knife away.

If you pick one up from someone else, you don’t need any sort of proof of purchase. They don’t cover normal wear and tear like worn or scratched coating (that just adds character!), dulled edges, or lost hardware, but if it breaks, they’ll fix it or replace it.

Folks can, and do, manage to break anything if they try hard enough; it’s not a mark of an inferior product. How a company handles that issue though says a lot about the character of the company and ESEE’s character is beyond reproach. 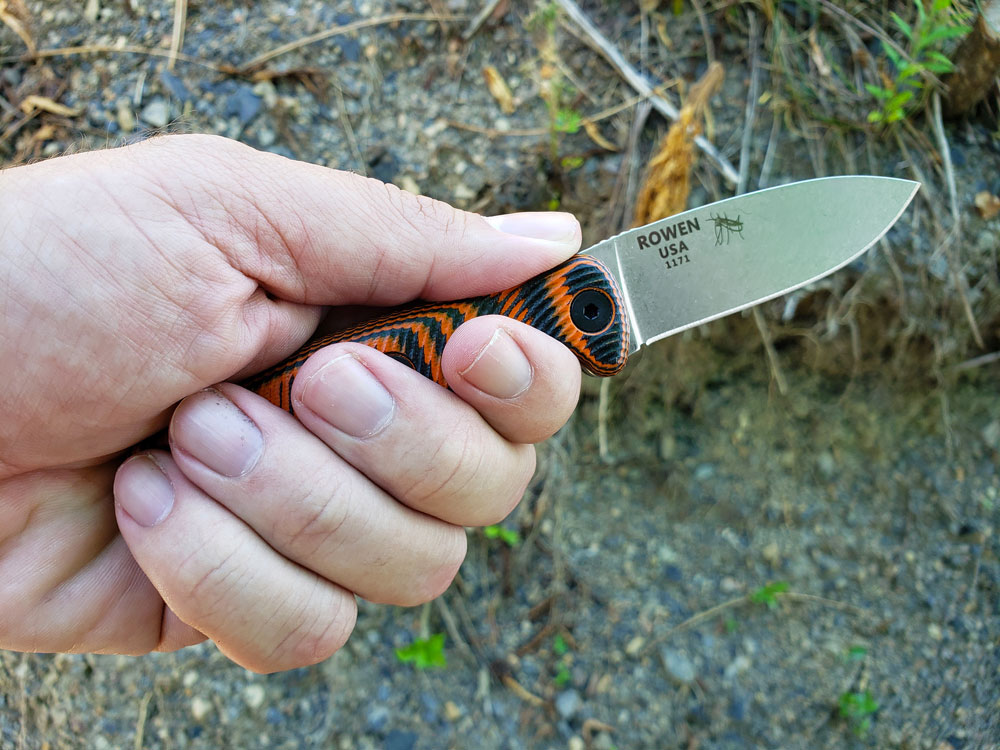 The Xancudo even worked well in rather large hands of the author’s friend. 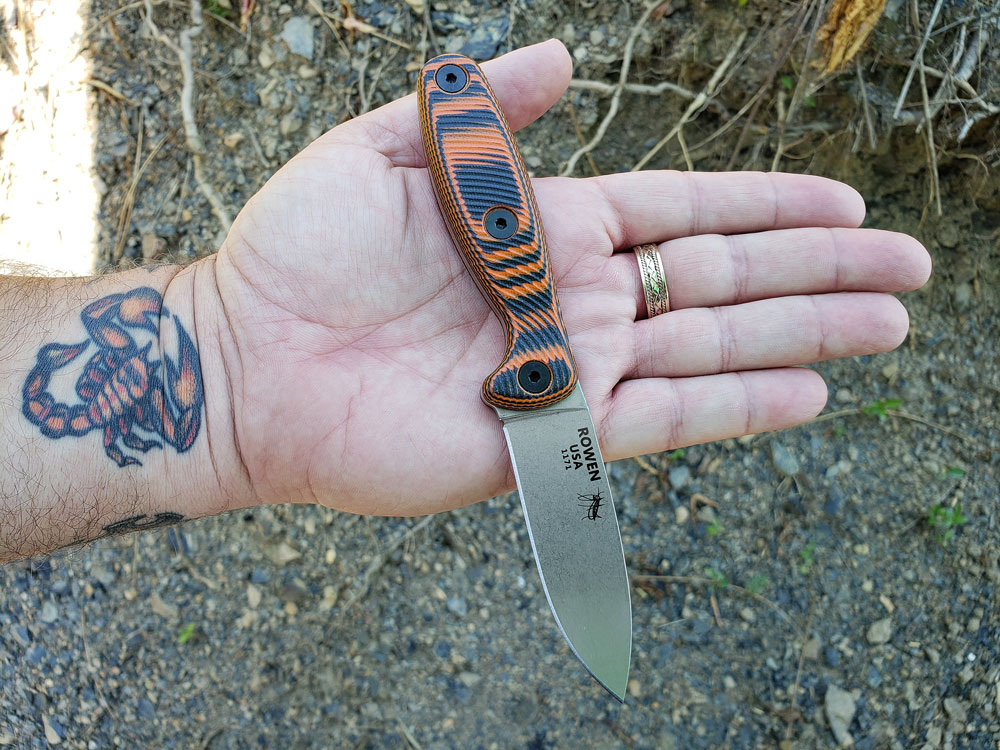 The Xancudo weighs only 3.8 ounces without the sheath, making it easy to carry for EDC or field use. 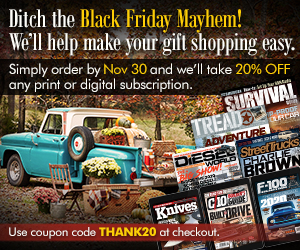