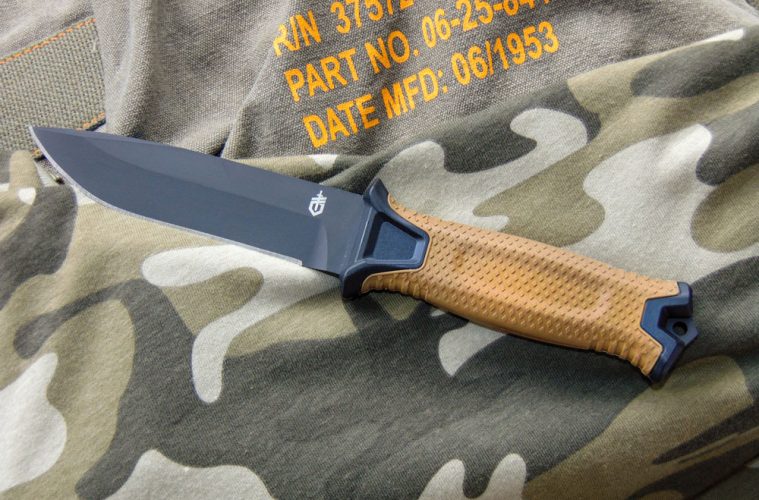 A simple, yet practical design, a sure-grip handle, and always ready to enter the combat zone when needed or as a backwoods companion, the Strongarm knife from Gerber Gear is a civilian’s answer to a military man’s blade that still offers a lot of versatility.

The Strongarm in its “off the shelf” blister card.

The Strongarm, featuring a full tang blade and rubberized textured grip, is at home in nearly any environment.

From steamy rain forests to tree-covered woodlands to swampy bogs to the city’s concrete jungle, this knife offers all-around use for a plethora of survival, bushcraft, and self-defense applications.

“Forget the bells and whistles, discard the decorative, and carry this blade wherever your adventures take you.”

Not content with just believing blindly the descriptive words of the packaging, I took this military-style blade into the field, both in rural and urban settings, to test the metal and the mettle of this overall intriguing knife. 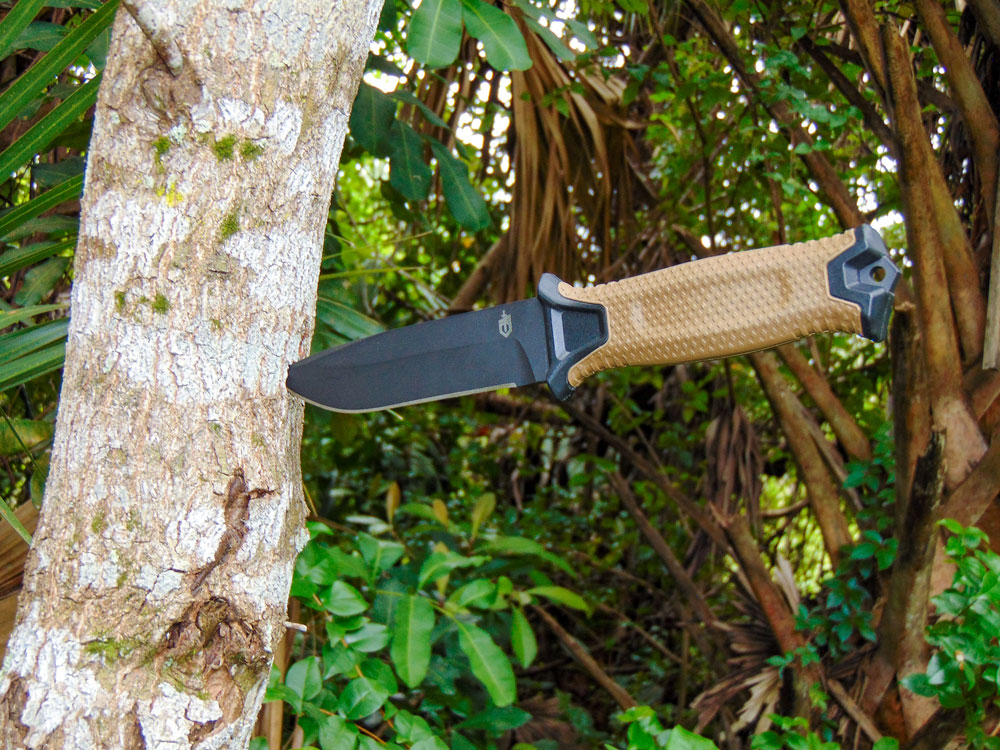 The Strongarm is just as at home in a jungle environment as it is in an urban setting.

The Strongarm In Hand

Upon removing the knife from its packaged blister-card, I immediately noticed its simple stockiness. It felt solid in my hand with a no-frills feel.

There were no issues with it fitting well within my grip, with my larger-than-average hand and fingers being able to position well on the rubber and not slipping off or squeezed to the point of uncomfortableness. The rubberized diamond texture of the handle “locked” the knife within my palm with an almost adhesive-like attachment.

The weight (7.20 ounces) of the Strongarm was neither too great nor too light. Like Goldilocks says, it was just right. Again, as mentioned earlier, it exhibited a stockiness that reinforced, even preliminarily before true testing, that this knife could be a reliable companion and get the job done.

Due to the fact that I have tested numerous knives in the past, some just have a “feel” that, upon first handling, I already know that it won’t stand up to much punishment, or perhaps not even make it through the tests. The Strongarm had no such foreshadowing, and it was indeed quite the opposite.

Overall, the knife’s blade length just skirted below 5 inches, more than adequate for tactical, self-defense, and bushcrafting applications. It featured a drop-point straight blade with a very decent amount of cutting area.

The handle exhibits dual guards that are meant to prevent a person’s hand from slipping forward onto the blade during a powerful thrust or cut (that will be tested), and the handle culminated in a slightly angled outward butt and a pre-drilled hole for adding cordage if wanted. 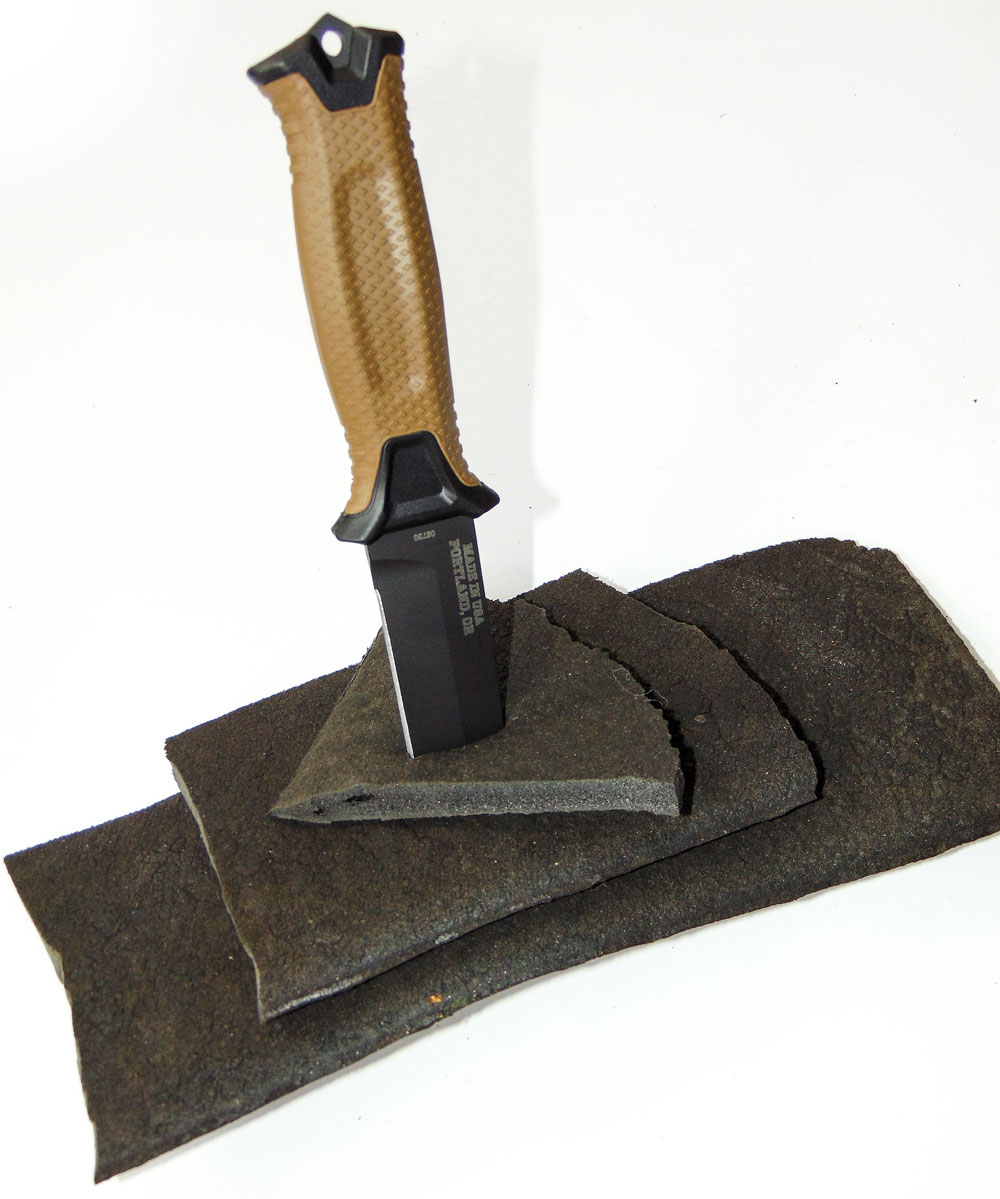 Three pieces of rubber matting was the obstacle for the Strongarm. 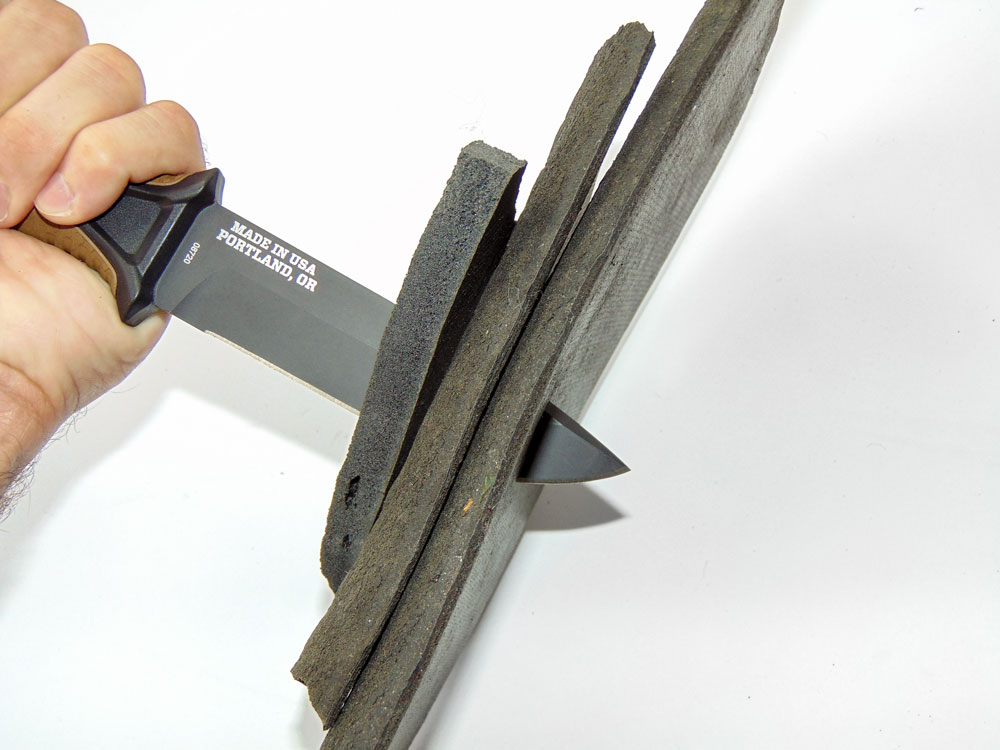 The knife penetrated all three chunks with ease. 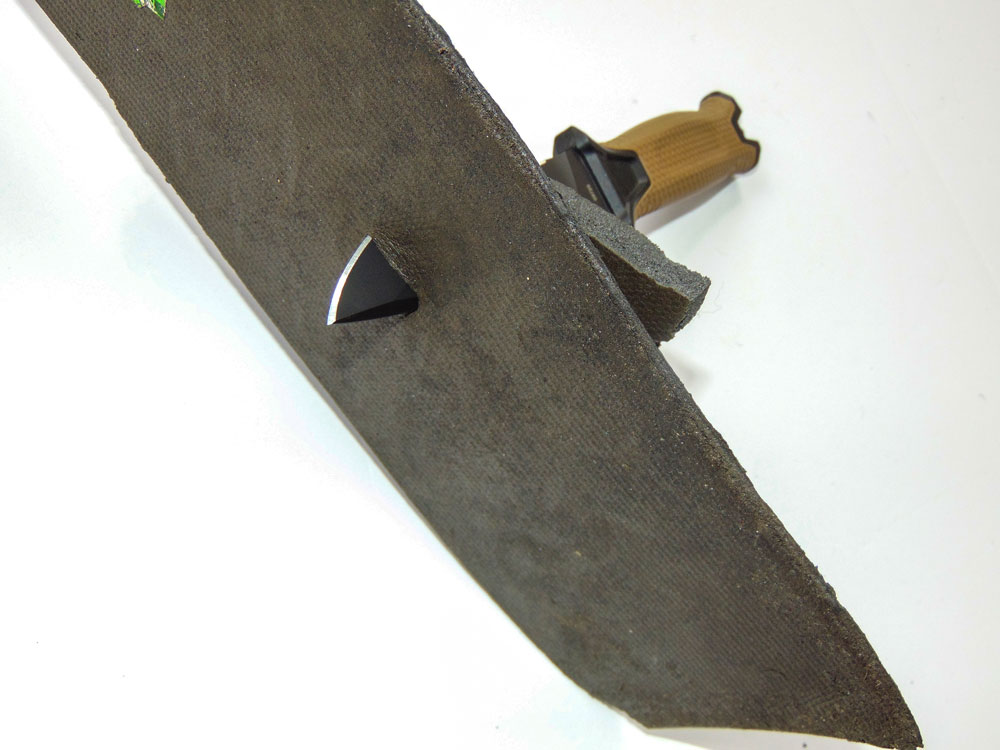 The Strongarm is just as at home in a jungle environment as it is in an urban setting.

THE BASICS OF TACTICAL

Although it may be trite to test the Strongarm against some of the more common materials frequently used during a knife trial, I would still rather know that it works against what it may commonly be up against.

For effectiveness while “in the field” it’s best to use the somewhat overused testing methods than to create new, yet unpractical tests for the sake of being different.

With that said and with the Strongarm being a tactical categorized knife, its ability to cut cordage, straps of all types, and its ability to hold up to repeated stabs that are frequently employed for both self-defense techniques and breeching applications are must-test scenarios. 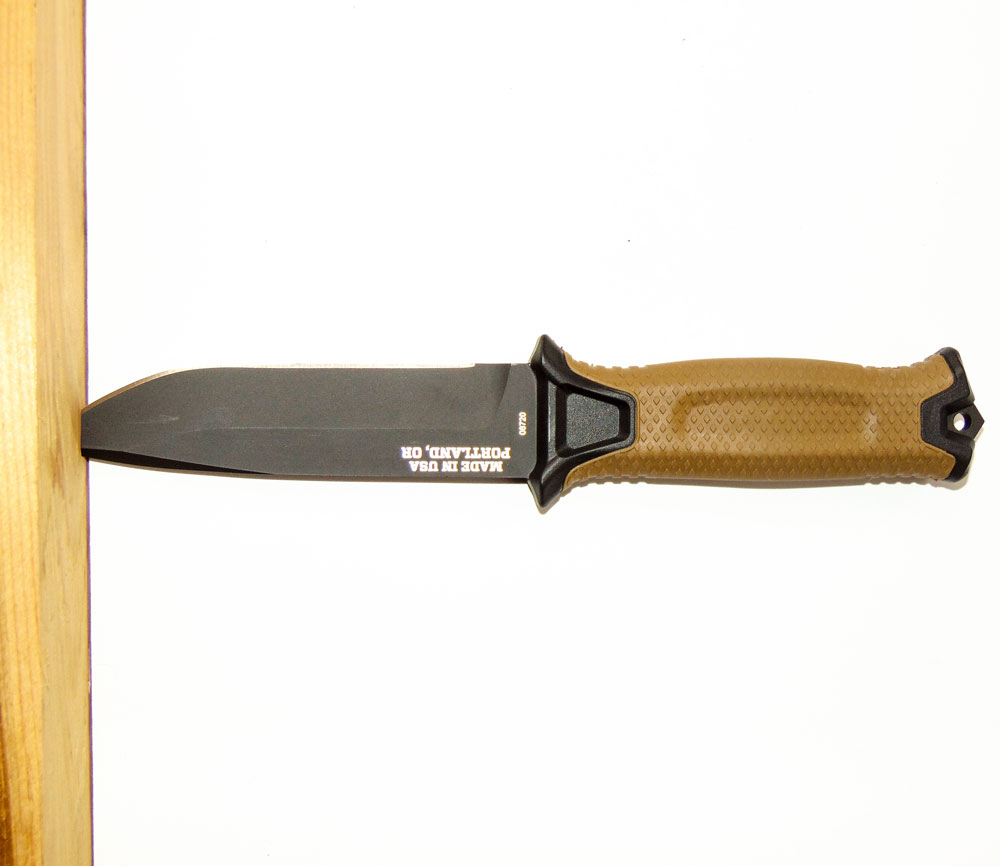 With one thrust, the Strongarm disappeared into the wood plank nearly three-quarters of an inch deep.

Cordage was the first obstacle in the Strongarm’s way. Needless to say, given its impressive specs, the knife ripped through single, double, and triple lengths of paracord.

Although this feat may not seem notable, bear in mind the cordage used was not only true 550 paracord, but it also featured tougher-than-normal “guts” inside including fishing line, tinder line, and most durable of all, snare wire. 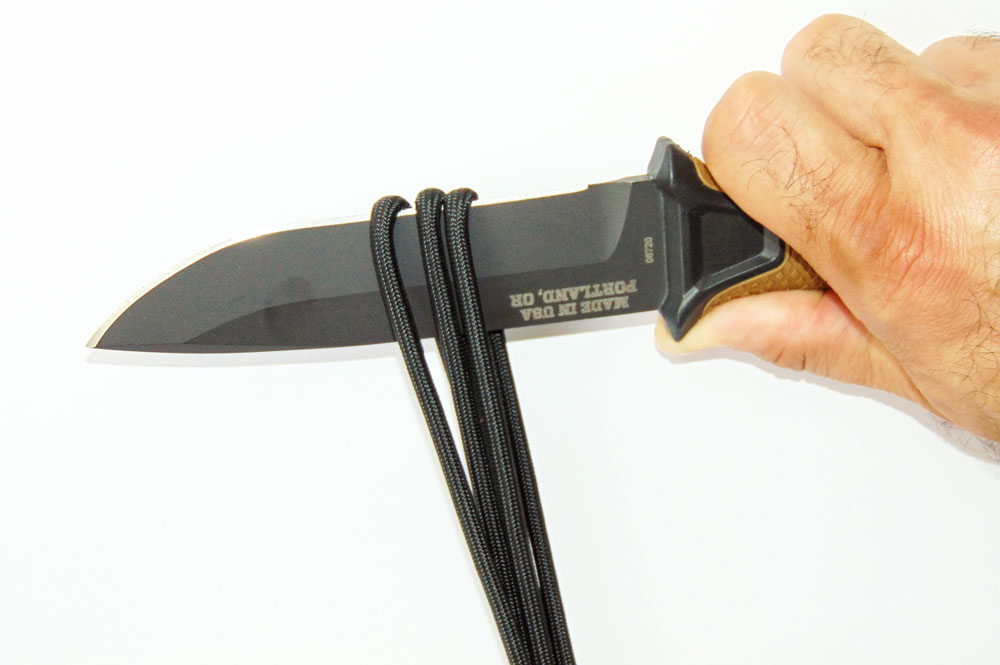 A clean cut through three lengths of cordage was attempted with the Strongarm knife.

The next challenge for the Strongarm was to easily slice through straps similar to those used in vehicle seat belts. The key word here is easily, for when lives are at stake, struggling and eventually splitting a belt in two needs to be accomplished fast and without any hesitation.

Under tension the belts gave way to the cutting power of the Strongarm with no trouble. This is the ultimate want from a tactical knife such as this. With lower to nearly no tension on the belts, the Strongarm continued to prove its worthiness and sliced through the wide straps using just a bit more force and its ultra-sharp 420HC steel blade.

The tang construction enabled all the power from my arm to transfer to the cutting edge. This is a task that may not be easy for a knife with a partial tang or no tang construction, for it can “give” at the connection point between blade and handle.

The Strongarm prevailed in this cutting test, which as mentioned earlier, is so very important because first responders to accidents and emergencies need a blade that acts and reacts fast. 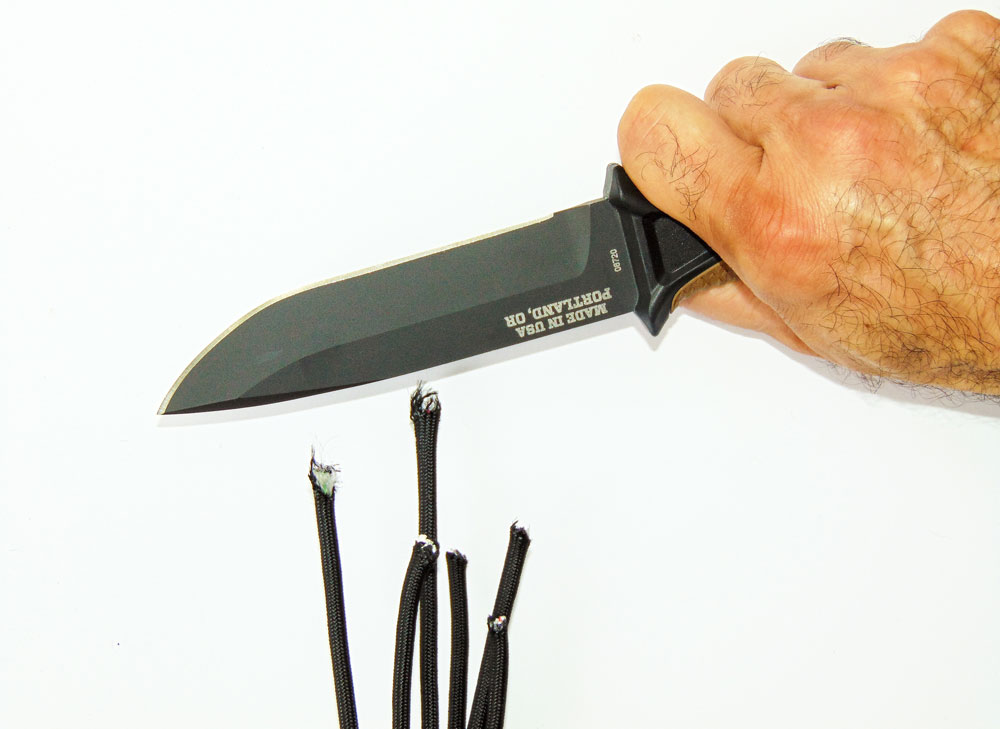 The 550 paracord didn’t pose any issues when cut through with this powerful and sharp-out-of-the-package knife.

For the stabbing tests, materials such as stacks of cardboard, wooden planks, and rubberized materials were used to illustrate the variety of items that you with the knife might encounter under both normal and emergency conditions.

Cardboard may appear flimsy and no challenge, yet it can not only dull a blade quickly, but it can actually create an almost vacuum effect and keep the knife firmly within the material.

It’s comparable to the suction a blade with no bloodline can create when it punctures and enters deep within the tissue and/or organs of an animal.

The knife dug deep into a stack of cardboard and with a quick pull upward, the blade was extracted from the pile with ease. Several more downward stabs were performed. The blade stood up to the cardboard repeatedly. 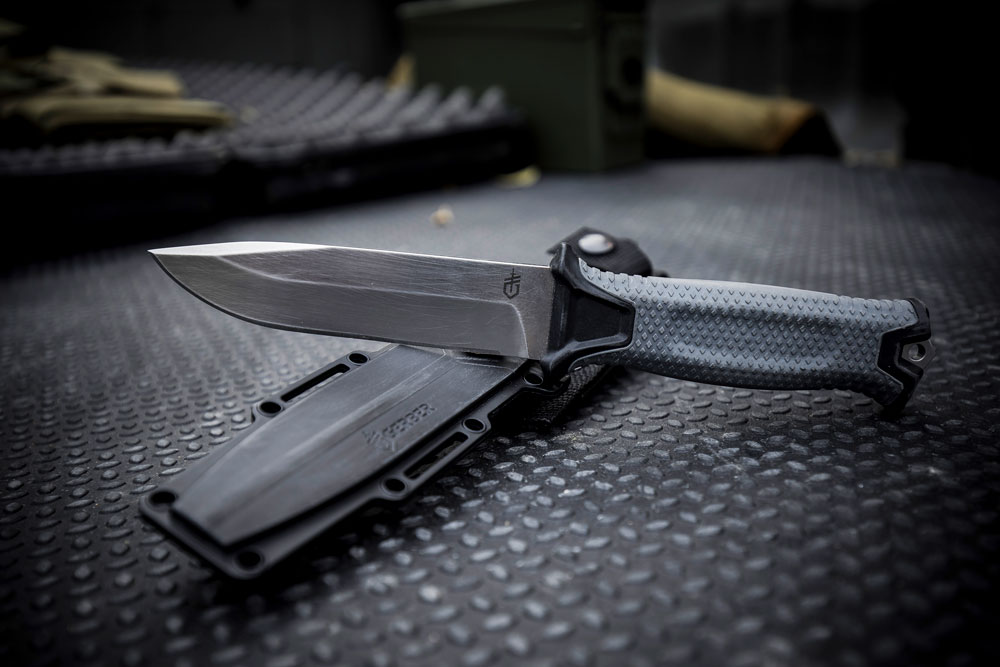 A black and gray version of the Strongarm.

The wooden plank puncturing test illustrated the power of the Strongarm as the tip disappeared at least a half-inch or more into the wood.

With a quick tug and a repeated strike, it dug even deeper. The handle was well suited for puncturing. My hand stayed firmly in place as the rubber provided a slip-free surface.

The rubber matting exhibited similar characteristics as the cardboard. It produced a suction effect when pierced. However, this didn’t stop the Strongarm, not by a longshot. It penetrated the rubber with little resistance and was extracted with similar results.

With each strike I drove deeper into the synthetic material and it performed equally well each time.

Cutting through rubber and some soft plastics can put up a surprisingly tough fight due to their flexible characteristics that move with a blade and “give” with even the slightest pressure to make cutting something without rigidity very difficult. This was definitely not the case with this test.

Although military in design and style, the Strongarm is well suited for nearly any task that it may face. Aside from the normal applications, this knife can be attached to a staff and be used to spear fish or thrown at terrestrial animals.

It can shave tinder for a fire, fell small saplings, carve makeshift utensils, break glass during an emergency, used as defense against an attack, and numerous other uses.

The truth is that this simple yet highly effective, not to mention durable-as-hell, knife can be your go-to blade for just about anything.

Forget the bells and whistles, discard the decorative, and carry this blade (however you want due to its ingenious multi-function sheath) wherever your adventures take you, be it across the globe or in your own backyard. 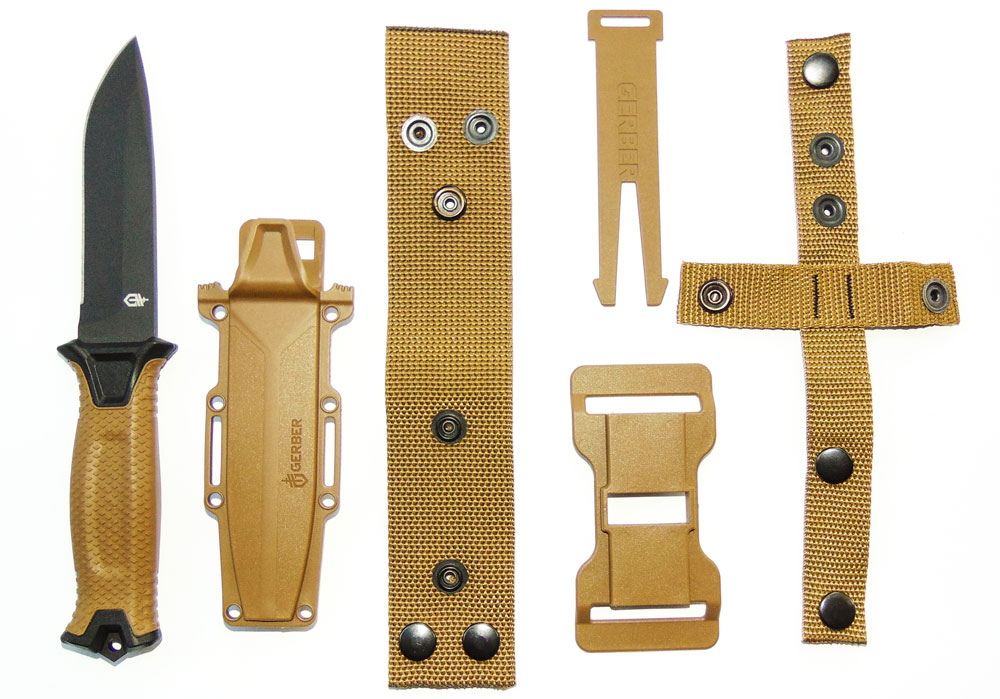 All the components of the Strongarm and its highly versatile sheath.

THE STRONGARM AT YOUR SIDE

Tests unfortunately are just that, tests. To truly judge the Strongarm you need to have it by your side, and you need to use regularly throughout your day’s travels. When ordinary tasks occur, you can apply its strengths and judge the results.

However, when the unexpected occurs, that’s where you separate the meek from the mighty. If it passes at a level acceptable for you, then this companion may have a home by your side that day and for years to come.

This knife’s sheath adds versatility to its powerful companion

Like the Strongarm itself, its accompanying sheath provides versatility no matter how and where you like to wear your blade-carrying companion.

With traditional drop-leg position, horizontal belt carry at the waist, and vertical MOLLE adaptation, no matter what you wear on a daily basis (or during emergency conditions) your Strongarm will only be a hand’s length away.

The Strongarm, tucked firmly within its versatile sheath.

The belt loops are completely detachable, making fastening and removal quick and easy without needing to undo your belt.

In addition, the snap-in enclosure keeps the knife from rattling when you are on the move. Also, the MOLLE integration allows you to take the Strongarm knife on many types of “missions”. This is due to its ability to attach to numerous types of vests, bags, and other compatible gear. 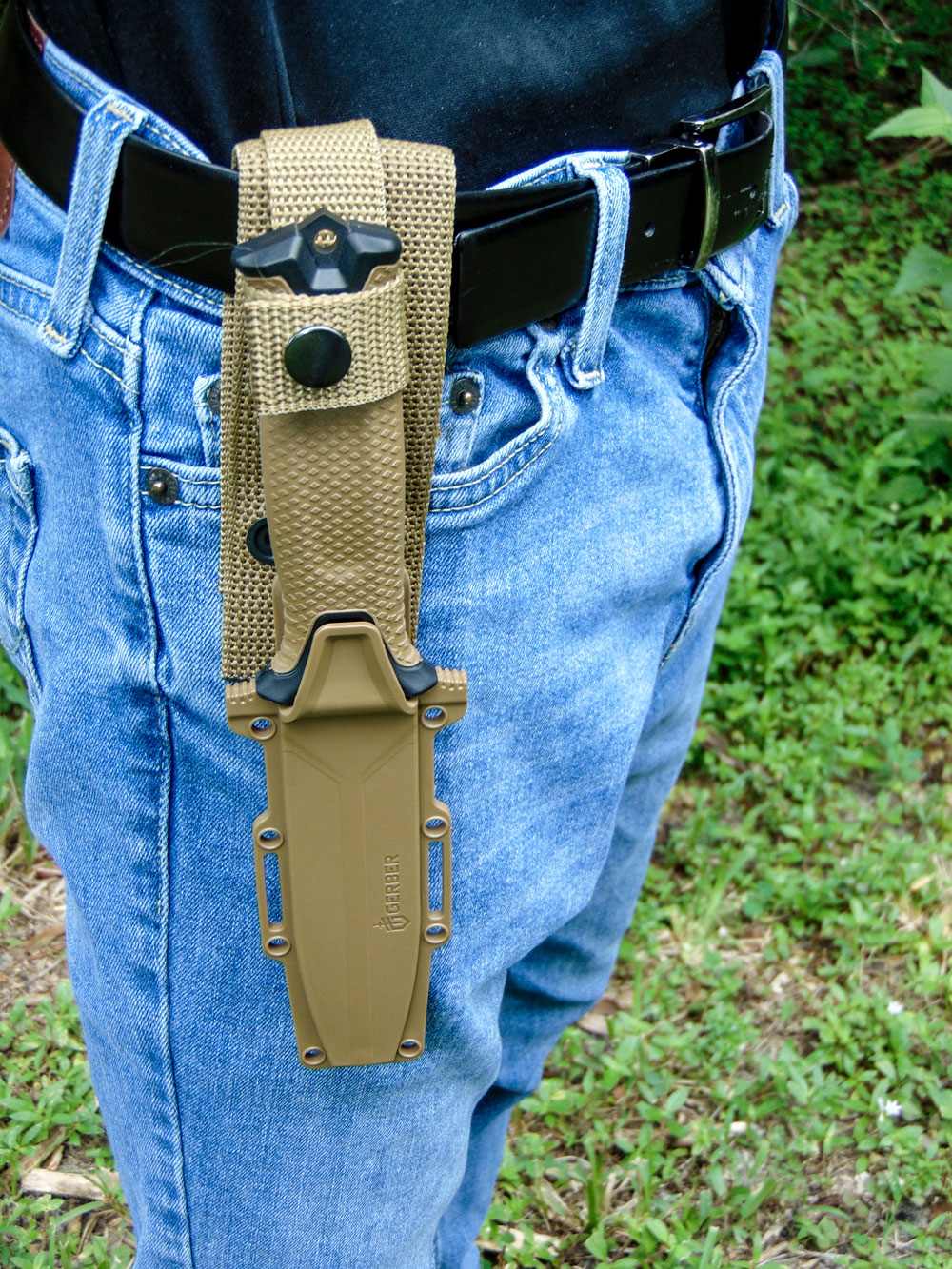 The material of the sheath is created from durable hard plastic with an equally tough strap attachment. Solid fasteners lock-in tight and snap back out with just the right amount of force.

Overall the sheath fits the Strongarm knife perfectly, both literally and in functionality. 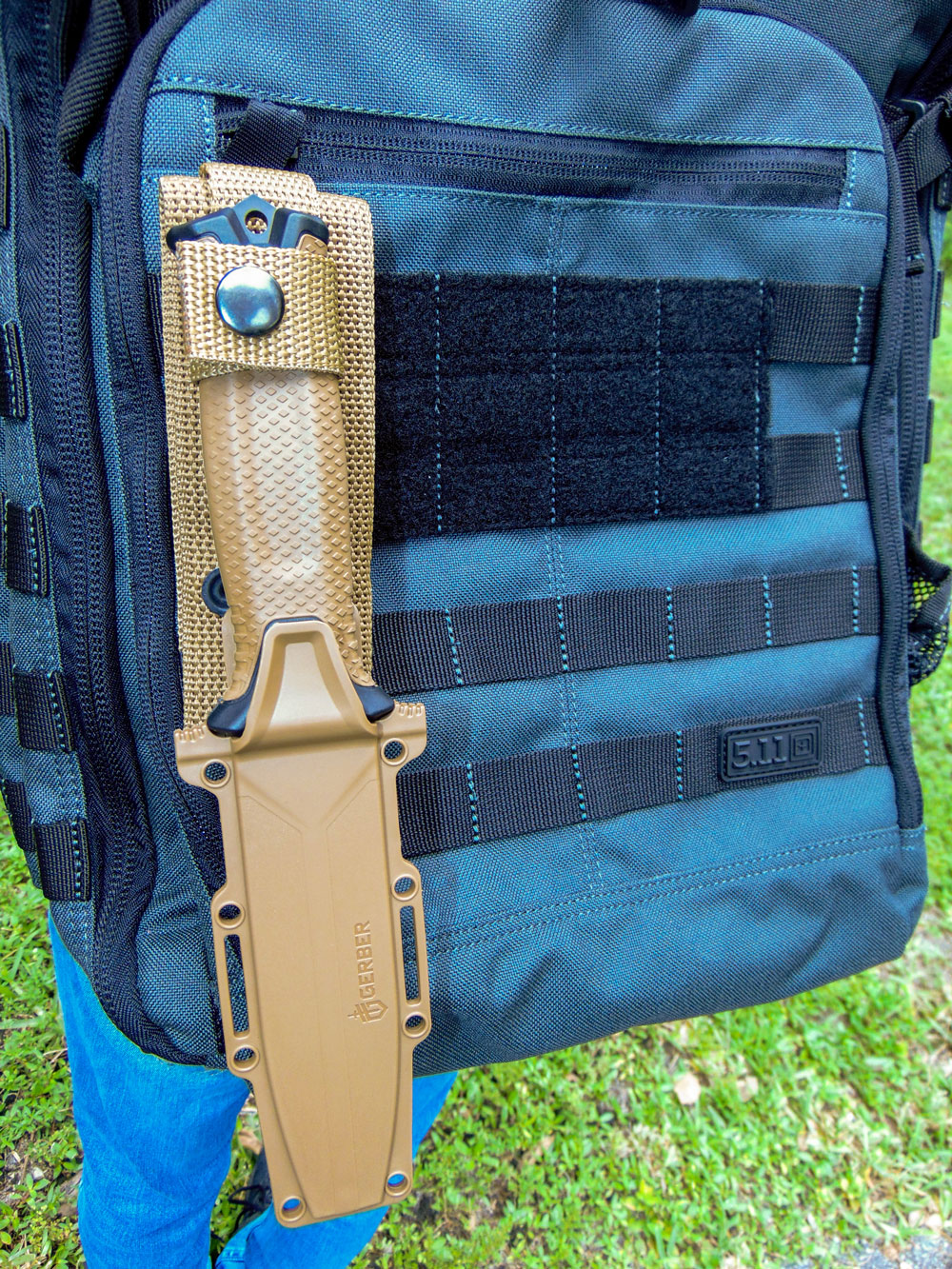 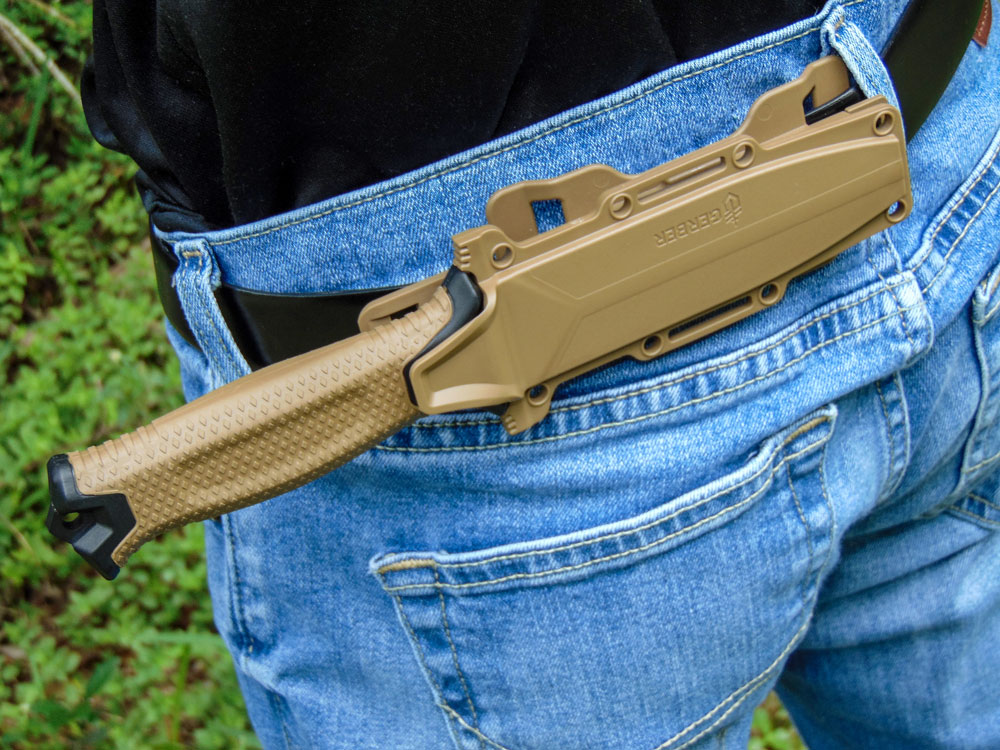 “Behind the back” carry