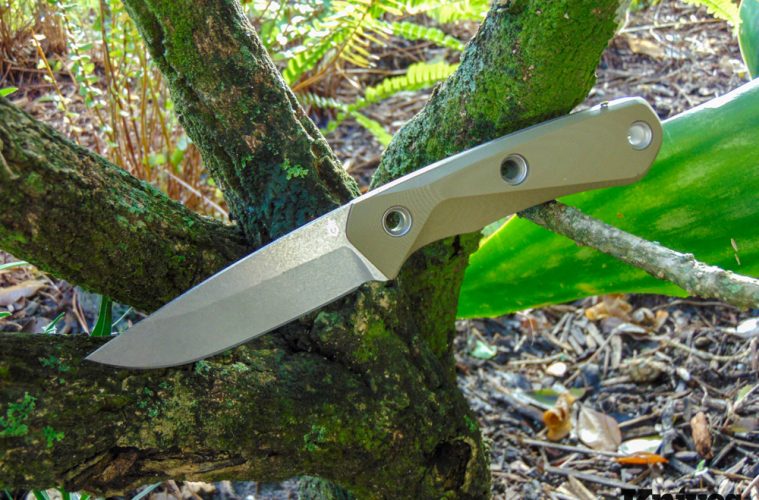 Gerber is no stranger to tougher-than-nails knives that can withstand the punishments dealt out by Mother Nature. Now, the company steps it up quite a few notches with the Terracraft knife, one of the premier knives of its new Reserve Program (more on that later).

“The Terracraft is not only a knife to use daily, but one that will last for years and perhaps decades down the line.”

The Terracraft knife with its durable leather sheath. Gerber photo.

This top-quality knife pulls double duty as both a rural aid for all types of bushcraft and survival applications, as well as urban uses for both tactical needs and general-purpose, everyday use. What sets these knives apart from others is that they are created in small batches.

That ensures each knife receives individualized attention to overall quality, proper functionality, and small details that may otherwise be overlooked if mass produced. 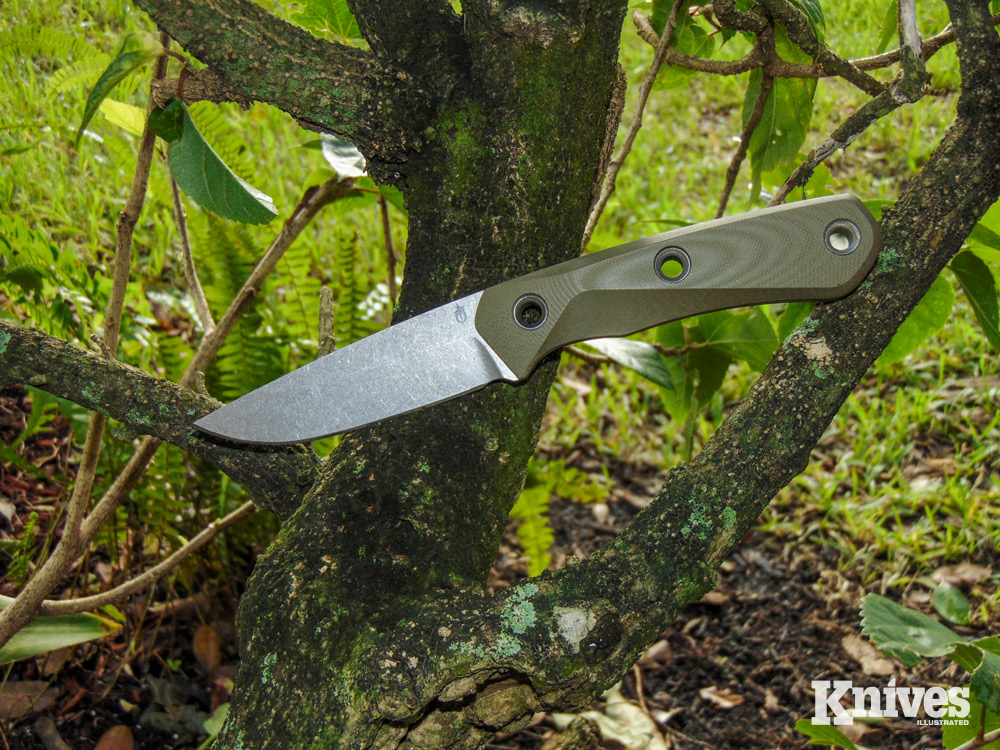 Gerber is no stranger to tougher-than-nails knives like the Terracraft, which pulls double-duty for bushcraft and urban EDC applications

I had a chance to take the Terracraft in hand to review its sleek design and characteristics, as well as test the blade under intense real-life situations.

Will it incur top marks and reach the top of its class, or is it far more style than substance? The answer lies ahead, but just a hint: Order yours today before they’re gone.

Simple and solid are two adjectives that came to mind as soon as I picked up the Terracraft knife.

With full tang construction and a handle that was absorbed into the contours of my palm, the knife exhibited the perfect extension of my own hand. 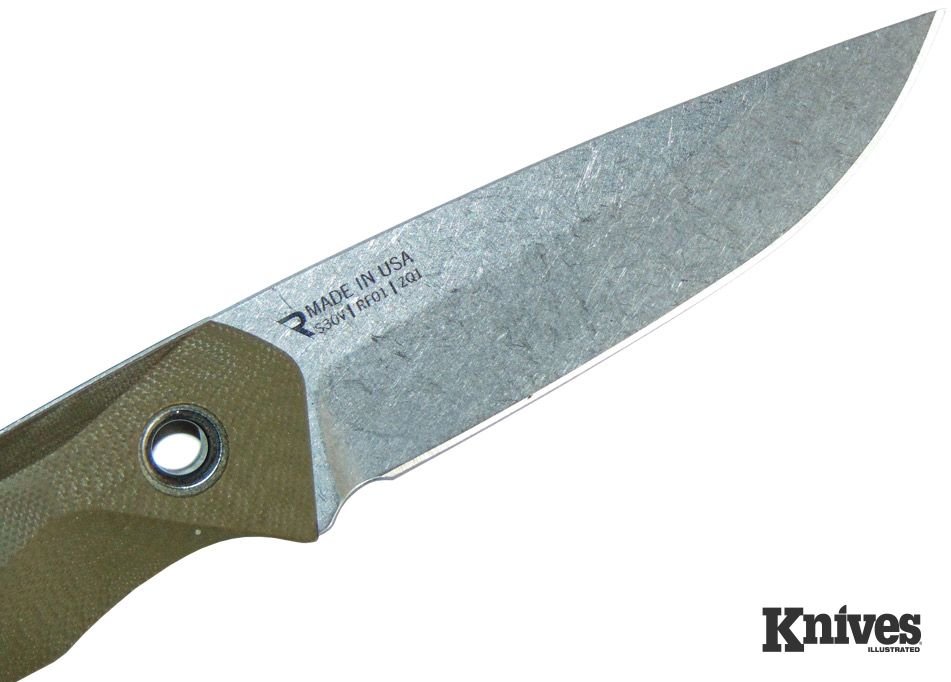 The 4-inch blade offered just the right amount of cutting length, and looking at the thickness of the blade, I knew this knife could hold up to loads of abuse out in the field.

The pommel, upon some pre-test research, boasted hammer-ready effectiveness, and it appeared to be able to back up that claim.

Three pre-drilled holes were equally spaced on the handle, no doubt contributing to the well-balanced feel. 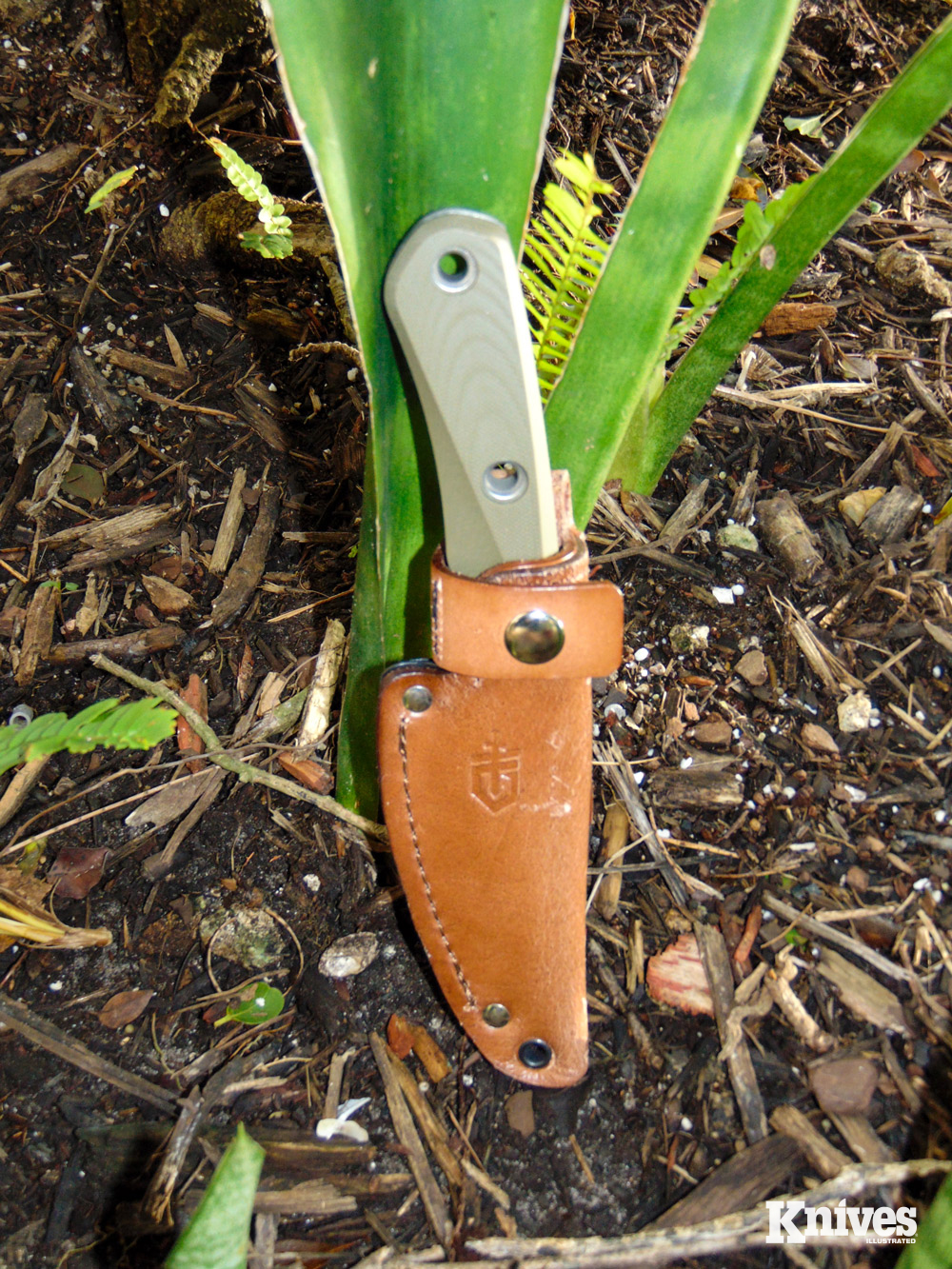 A top snap on the Terracraft’s included sheath locks the blade snugly so that there is little risk of losing your knife while traversing through thick brush.

The sheath was equally impressive. The thickness of the American-made leather was exceptional with both rivets and double stitching holding the material together.

A top snap locked in the blade snugly with little give; it was a sorely needed trait for traversing through thick brush when the risk of losing your knife is a very real possibility.

Basic, but in a good way, and yet quite functional in design, the included sheath attached easily to my belt without issue and stayed put during my short hike through the brush.

The true measure of a knife is, of course, its usefulness as arguably the number one survival or emergency tool you can have. It needs to stand up to the abuse and constant use for the numerous tasks that you may encounter when out in the field.

The Terracraft knife, if chosen to be your “knife of choice,” had to fit these requirements.

So, I trekked to a nearby wooded area cluttered with tropical trees and foliage and put the Terracraft through a series of specialized cutting tests to find the answer, and the results were overwhelmingly remarkable.

The knife’s handle was designed for multiple grips, all which serve one or more specific purposes.

You can comfortably hold the knife in a baseball grip, which allows you to put a great amount of power and pressure into your cuts. This is ideal for batoning larger saplings and small logs. The chest grip makes shaving tinder easy and precise.

And finally, the precision grip, which as its name states, makes very precise, delicate cuts, useful for preparing dinner or for small carving projects. These options allowed me to apply the Terracraft to a number of possible outdoor or survival scenarios.

“…it will hang at your side with both style and substance.” 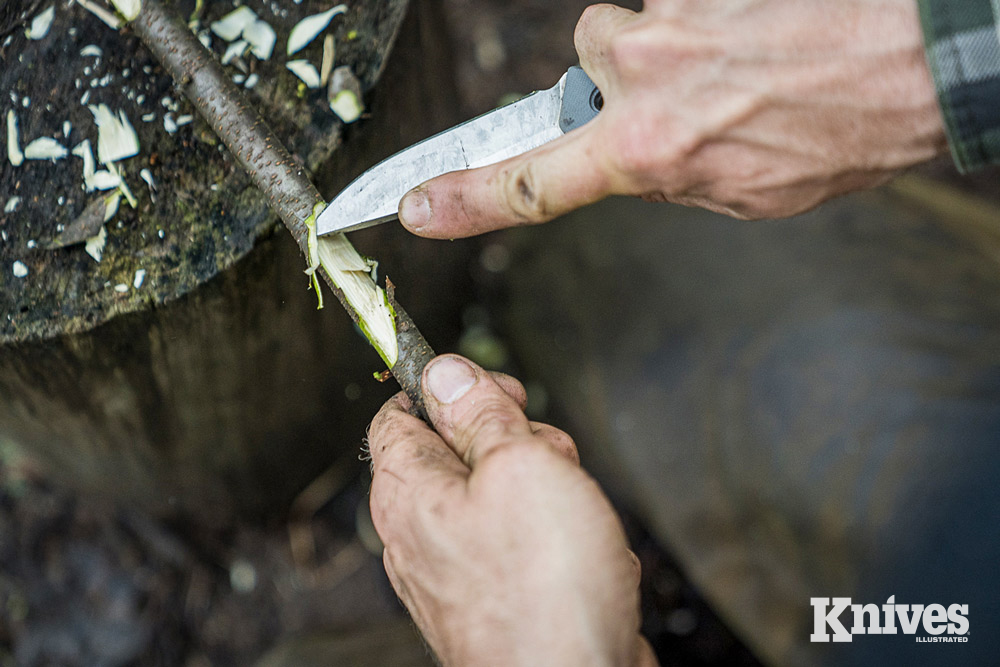 Delicate or precision cutting is achievable through the Terracraft’s ergonomic handle. Gerber photo.

With a small sapling, I was able to test the baseball grip, which for many is their go-to style of holding a knife. I first sliced off the small, flexible branches with no effort, which would be a person’s first step when creating a spear (as I did) or walking stick.

Next, I focused the blade at the tip and began to chip off pieces of wood to create a rough tip. From there, my cuts were more precise until an even and smooth, pointed tip was created. At no time did my knife feel resistance during the cuts.

It also didn’t dig into the shaft and chip pieces off due to the sharpness and cutting area of the blade. Overall, it only took a few minutes to transform a sapling into a fully functional spear. 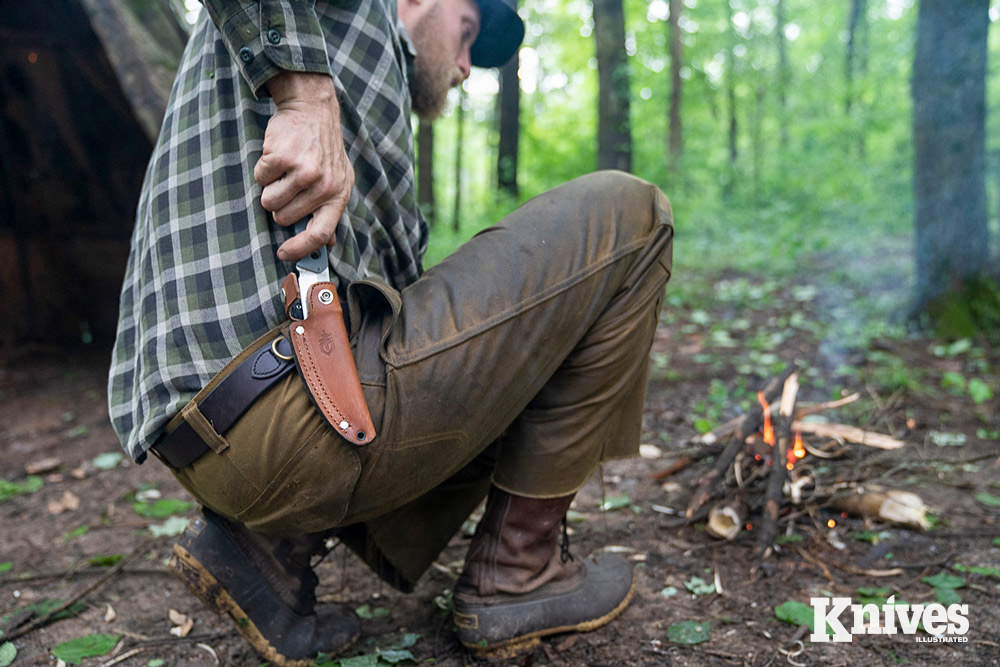 Ideal for outdoor applications, the Terracraft can be a trusted Bushcraft knife. Gerber photo.

Shaving tinder is an absolute necessity when fire needs to be created. Paper-thin shavings of wood make an excellent source of tinder and that was something I wanted to attempt with the Terracraft.

I chose a fallen branch, dead, but not decayed. With my left hand I held the end of the stick while planting the other end firmly into the ground. This created a stable setup for me to shave.

Using an extended version of the chest grip, I angled my knife and began. It took no more than a half dozen strokes to create a fluffy pile of tinder. This test was indeed a success.

My final test occurred not within the wooded area of the previous one, but rather in my own kitchen. A well-rounded survival or bushcraft knife should be able to assist in preparing a meal if needed.

After cleaning it thoroughly, I chose a large piece of beef to break down into a number of smaller medallions to sear on my cooktop. 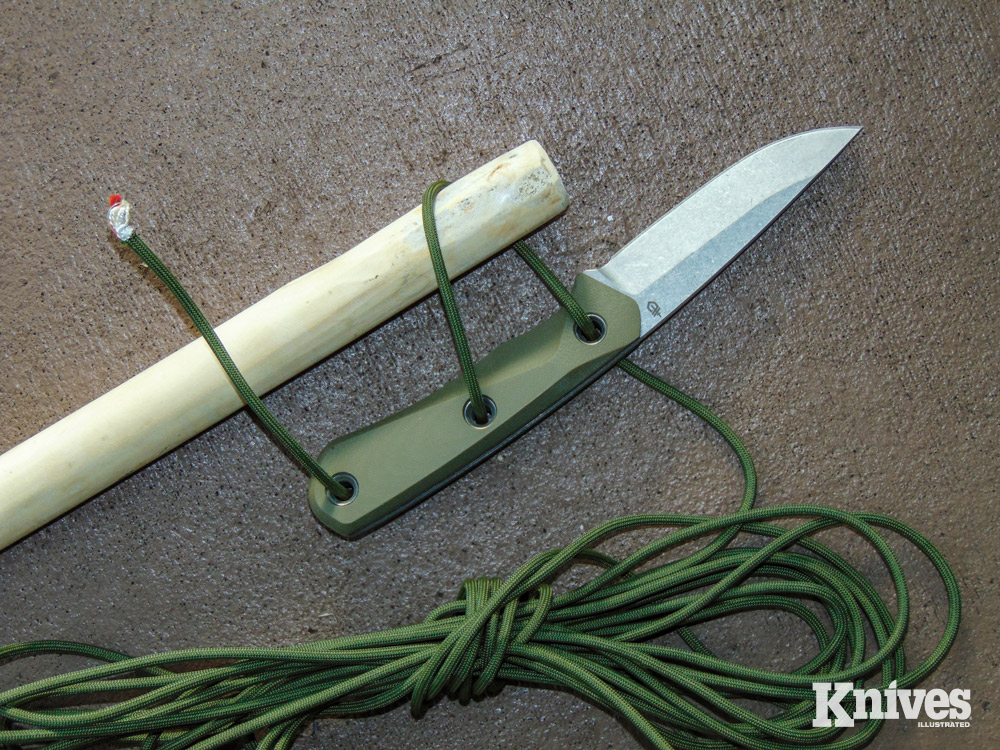 The point penetrated the fibrous muscle tissue. With controlled movements of my hand, I guided the knife across the large piece of meat. The sharpness of the blade did the majority of the work.

The handle’s design, as mentioned earlier, made hand transitions easy and controlled. This knife truly could find a permanent home in an individual’s kitchen, but unfortunately that would limit its plethora of other uses.

However, when camping and it’s time for dinner, the Terracraft would surely show its talents.

Not everyone spends time in the great outdoors, whether by chance or by choice. In fact, the majority of individuals throughout the country reside in urban or suburban environments.

With that being said, does the Terracraft have a place in the concrete jungle? The answer is an astounding yes. 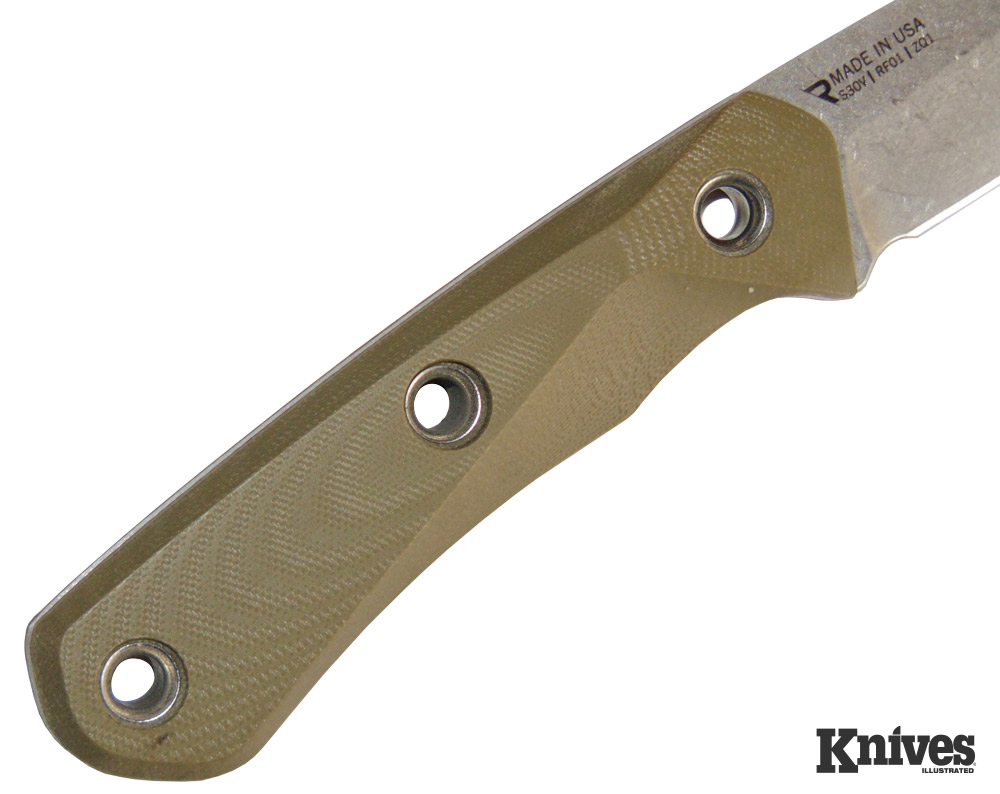 The three pre-drilled holes on the Terracraft are equally spaced on the handle, contributing to its well-balanced feel.  Michael D’Angona photo.

This knife can cut through plastic hosing, zip ties, wiring, and duct tape, just as well as it does through small branches and vines. Many of these items I found throughout my home and they offered no challenge to the sharpened edge of the knife.

The only limitation is the flexibility of the material. For hoses and zip ties, for example, the knife lacked stability against the flexible materials. However, once the slack was removed, the knife did its job.

As previously mentioned, the butt of the knife is hammer-ready, that is, able to be used for minor striking of various materials. These could include nails, vehicle glass, windows, weak or thin wooden boards or panels, ceiling tiles, etc.

Knowing that the non-sharp end of the knife can be used without causing damage to the knife itself is an absolute plus.

Although definitely not an intended primary use for the Terracraft, it can be used for self-defense purposes.

Without complicated “bells and whistles” to impede your grip or deny access of the blade within the sheath, you can, if needed, draw the knife quickly if or when danger comes your way.

FOR TODAY AND YEARS TO COME

If you’re wavering between purchasing this knife and passing on it, then let me help with your decision.

The Terracraft is not only a knife to use daily, but one that will last for years and perhaps decades down the line. Its superb construction and durability, coupled with its simple design lend itself to basic, everyday tasks, as well as emergency or survival applications.

In addition, the Terracraft is the flagship of Gerber Gear’s Reserve collection, so this distinctive blade, especially if you choose to customize it, will hang at your side with both personalized style and hardcore-tested substance.

Their first selection in the Reserve Program is the Terracraft knife itself, followed by the Sedulo, with more incredible selections down the road.

In addition to buying each Reserve knife as-is, the recipient can also customize it in Gerber’s custom shop. This gives everyone the opportunity to take an already top-tier knife and personalize to their own wants and needs.

Check out the Reserve Program Terracraft Knife at GerberGear.com and explore the custom shop to add your own unique flair to your EDC knife.