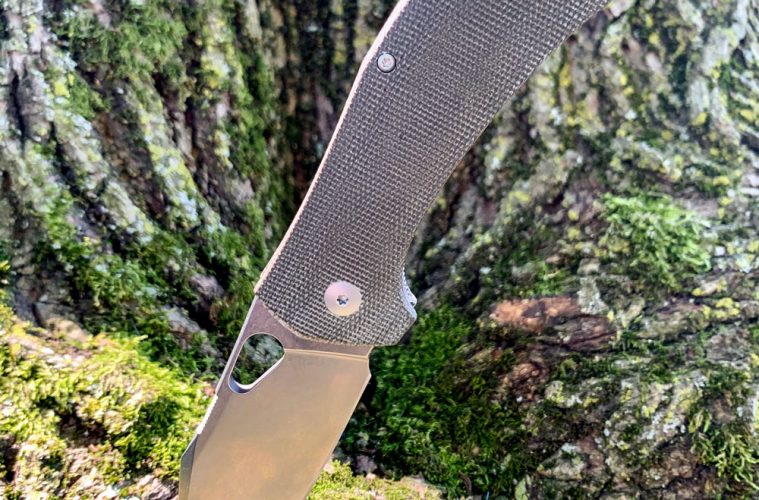 Full Production Update to a Legend

Giant Mouse is the wonderful lovechild of world-renowned knife designers and makers Jens Anso and JesperVoxnaes. The collaboration came about when the two Danes were having a few cocktails with American entrepreneur Jim Wirth at a knife show.

All three decided to combine forces to not only get some new designs out, but to also get Anso and Voxnaes’ work out to a few more people. 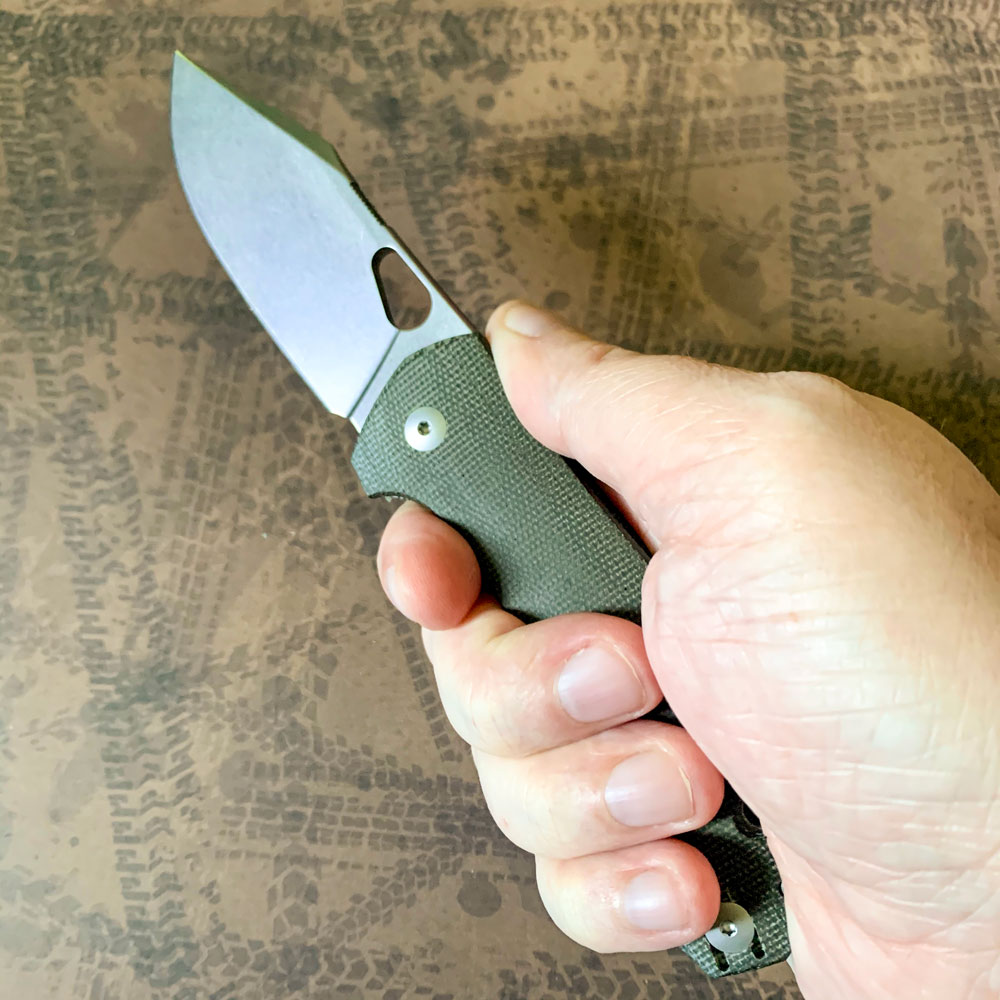 Like most Voxnaes and Anso designs, the Grand is extremely comfortable in the hand.

Initially the emphasis was definitely on “a few” more people. Runs of standard Giant Mouse models are limited to 500 pieces and that’s it. Once they’re gone, they’re gone. Never to be seen again.

However, over the last couple of years, Giant Mouse has decided to feed the knife-collecting masses what they want by going into full production under the ACE name.

Some are entirely new designs, and some are production versions of its more popular limited-run knives from the past. The new ACE Grand is one of the latter.

“This knife is a perfect addition to the Giant Mouse lineup. Like any good wrestling stable, they needed a big enforcer.”

The Giant Mouse GM5 was designed to be a harder use/bushcrafting/hunting folder. It’s become one of its more desirable designs on the secondary market.

The ACE Grand is a pretty true homage to the GM5 with different materials, a liner lock, and Italian production.

The Grand uses American made canvas Micarta scales, UddeholmElmaxSuperclean steel for the blade, a ball bearing pivot, and the wire clip, which has almost become a signature for the entire Giant Mouse ACE line. All that comes for a more than reasonable price of $185. 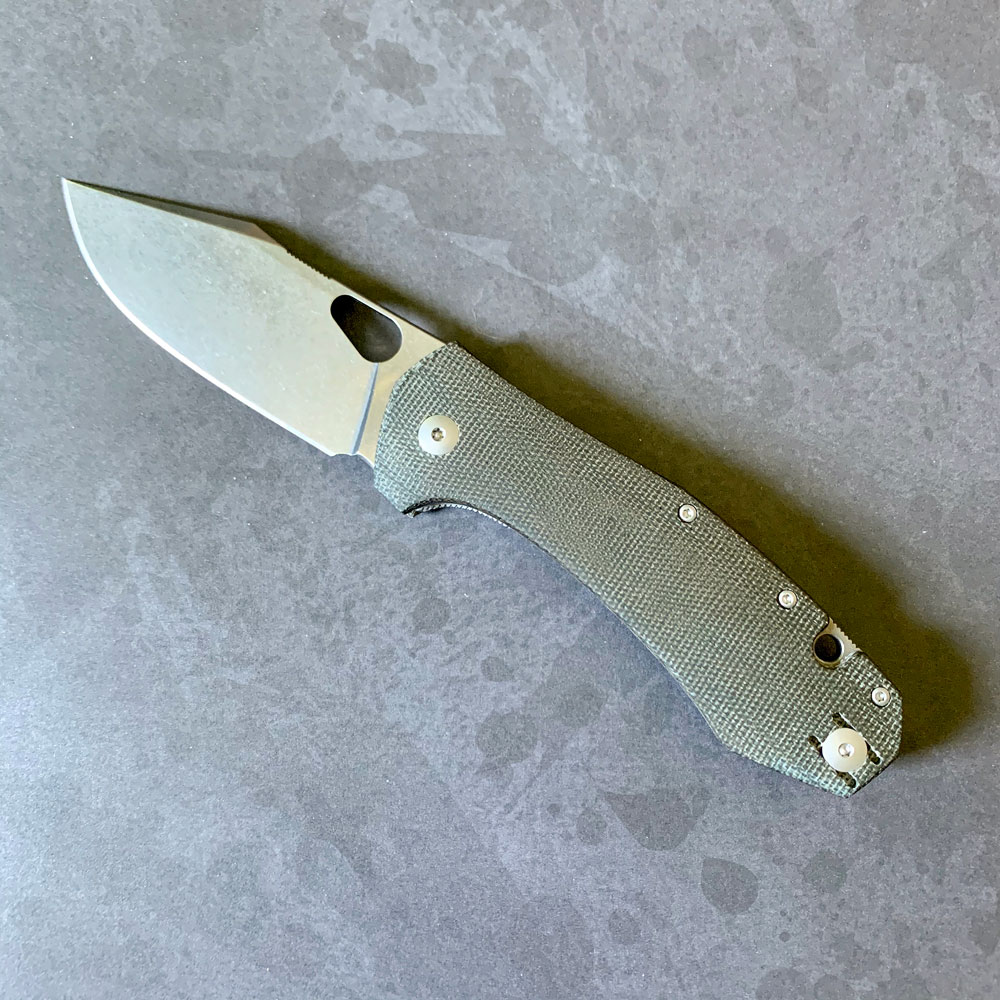 While the Grand is designed to be a worker, it’s also a looker

This new knife is also a looker. It manages to combine a classic blade shape with modern touches very well. The Micarta scales blend very well with the bronze backspacer and the wire clip looks right at home here. There’s a lanyard hole if you’re into that, but it doesn’t dominate the design in any way.

Blade stock on the Grand is a bit on the thick side for a modern folder at 0.16 inch, but it’s not what I would call extreme and fits the knife’s overall personality. It’s a mostly full flat grind that tapers down to a very reasonable 23 thousandths behind the edge.

The clip point blade shape is a great choice for the Grand’s intended task. It gives a lot of cutting area while also providing a tip that’s accurate enough for detail work but isn’t so delicate that you’re likely to snap it off. 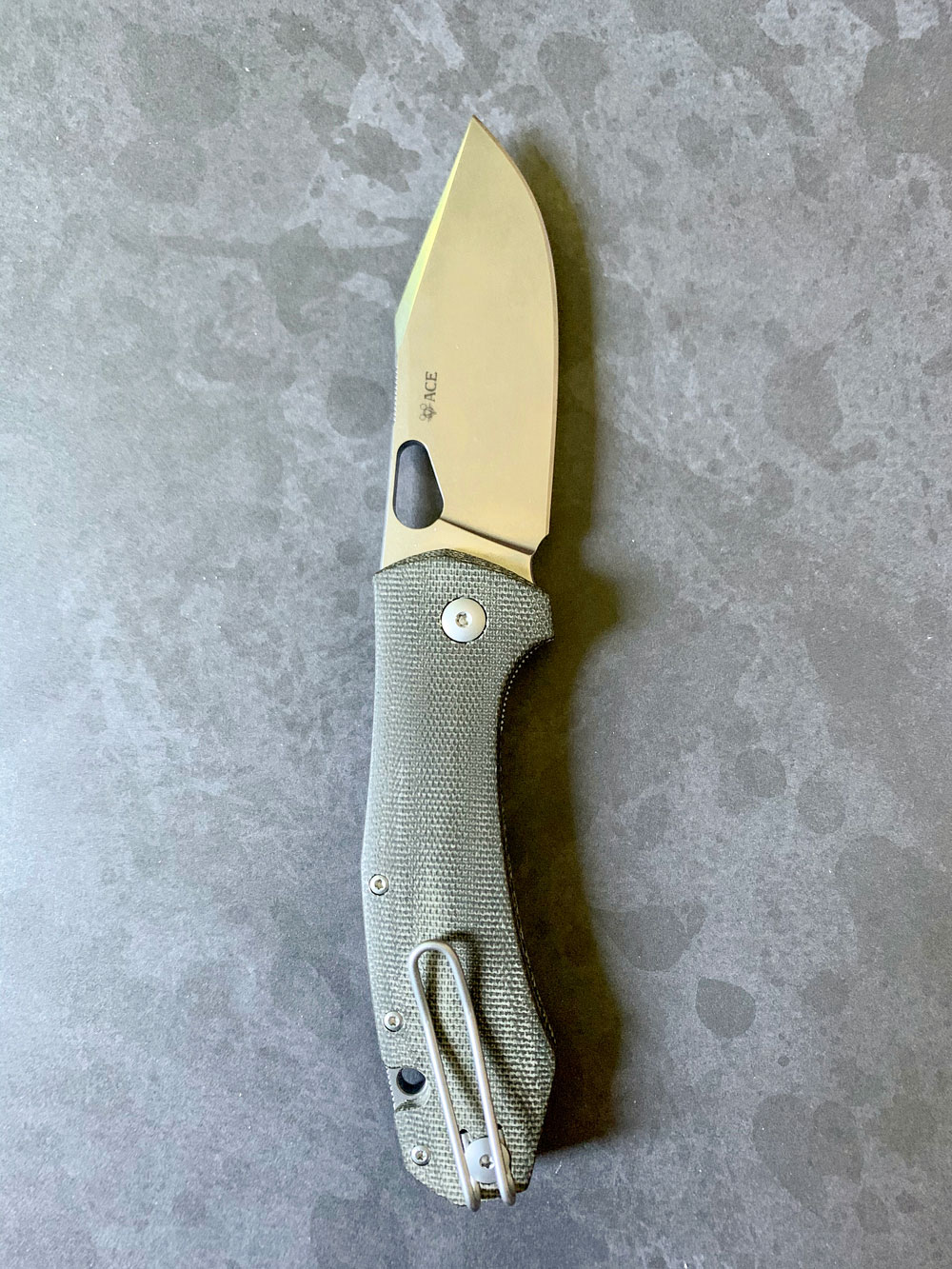 The Grand currently only comes in this striking natural canvas Micarta version.

The Elmax steel is also a great choice. It offers excellent corrosion resistance and very good edge retention. It definitely falls into the “super steel” category but isn’t nearly as difficult to sharpen as some other stills in this stratosphere can be.

I’ve always found any design that JesperVoxnaes is involved with to be exceedingly comfortable in the hand, and the Grand is no exception. I’ve often jokingly called Voxnaes my “hand twin” because all of his designs fit my hand so well.

In the case of the Grand, the thick and tall handle fills my hand very well and there is no hot spot from the clip no matter how hard I grip it. The Micarta handles provide enough grip for most situations without being so rough that they’ll damage your pockets.

The mid-blade jimping is sort of a trademark of Giant Mouse designs, and while it’s somewhat minimal, it’s perfectly placed for my longish fingers and really works well for detail work. Things like a crowned blade spine, a perfectly flush backspacer, and domed screws are also excellent touches. 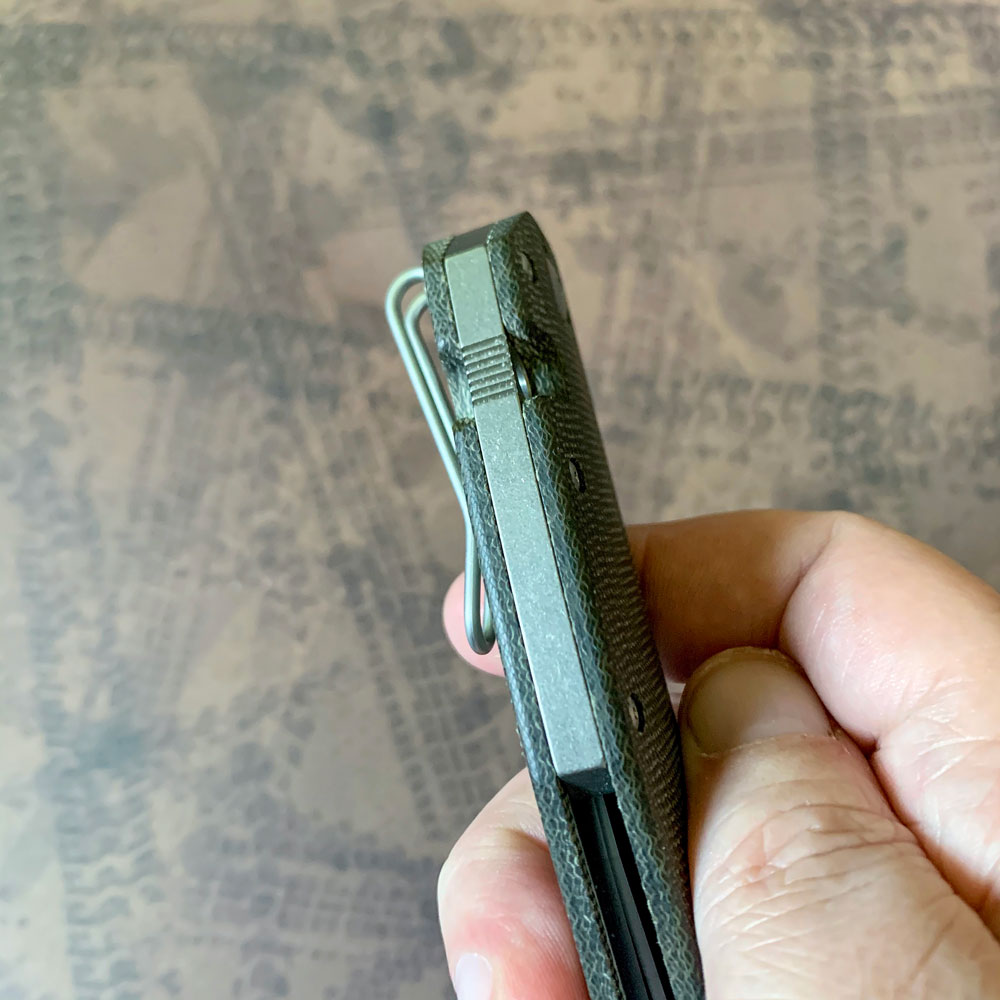 The Grand has a beautiful and perfectly flush bronzed titanium backspace.

For a knife designed for heavier duty use where it’s going to get dirty, pivot bearings were an interesting choice. I don’t 100% buy into the whole “bearings are weak” mindset, but they can gather dirt and grit in some situations for sure. For 95% of potential customers, it probably won’t matter.

“I truly get that not everyone likes wire pocket clips. You’re all wrong, but I get it.”

Whether they’re a potential weak point or not, they work very well. They run very smoothly and the detent on the liner lock is just about perfect. The Grand is very snappy and easy to deploy, whether you’re using a conventional thumb flick or a reverse middle finger flick.

It’s also easy to slow roll with your thumb if you don’t want to make a lot of noise or freak out Karen from HR. The deployment hole is also nicely chamfered and very comfortable to use. Access to the liner lock is above average but may be an issue when wearing really thick gloves. 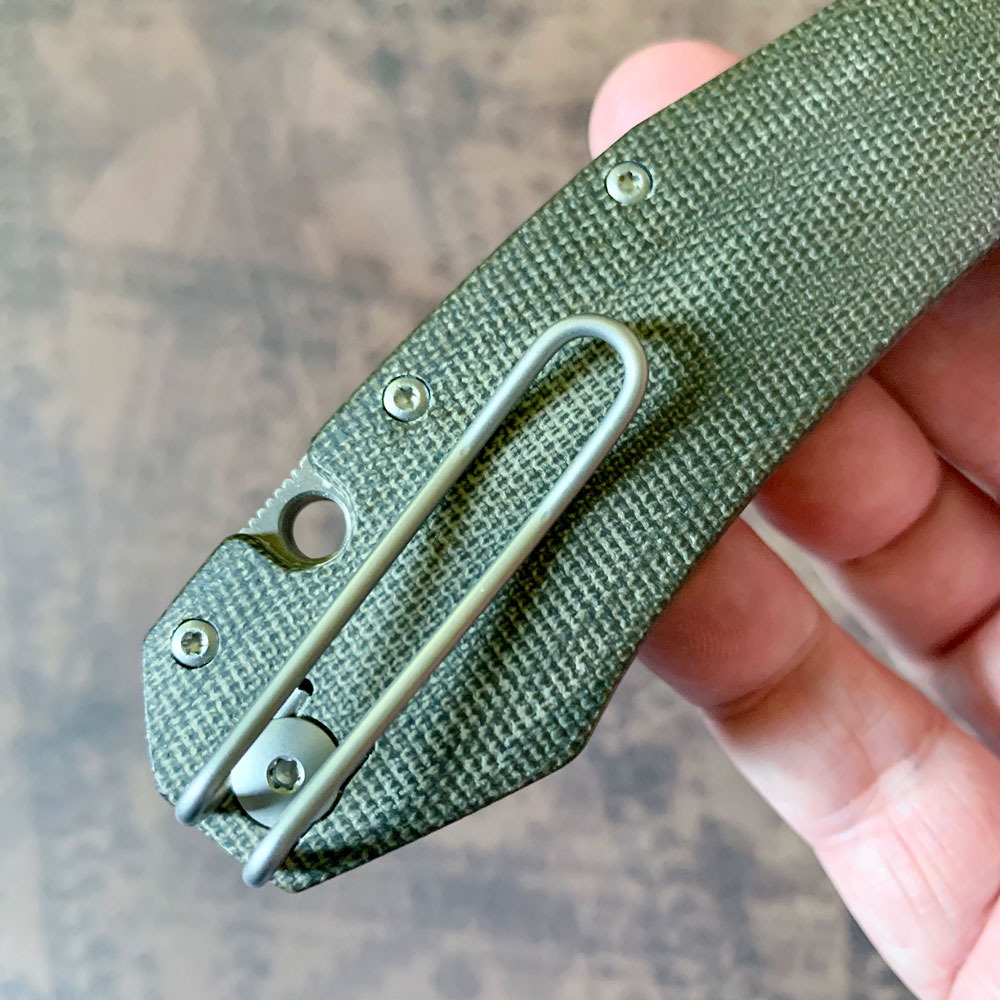 Wire clips are pretty standard on Giant Mouse ACE designs, and this one is excellent. 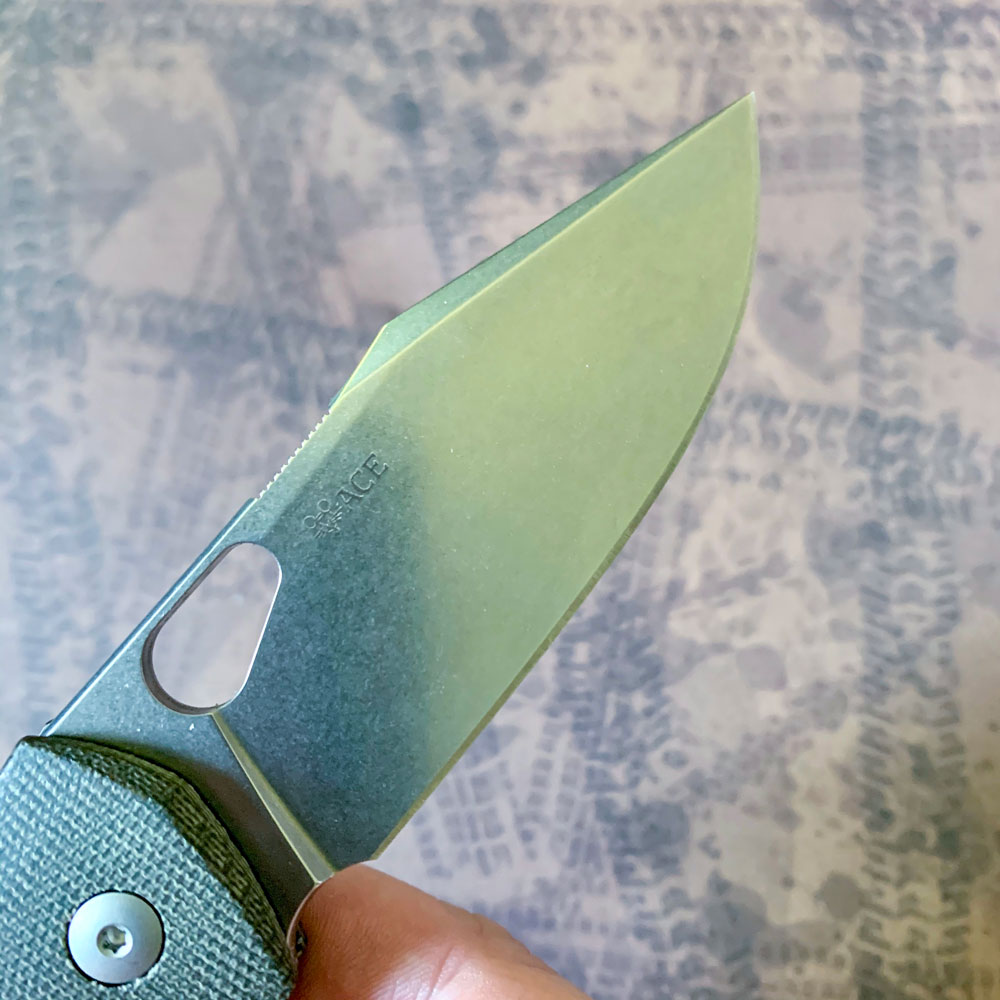 The Grand’s UddeholmElmaxSuperclean steel blade is a great shape for almost any task from outdoors to EDC.

I truly get that not everyone likes wire pocket clips. You’re all wrong, but I get it. They’re not particularly beautiful and you can potentially prang one if you catch it on something more easily than you can a more standard stamped clip. But … they just work.

They provide good retention, allow for deeper carry in the pocket and can be placed in many more locations on the handle than a conventional clip with three bolts can be.

The wire clip on the Grand is excellent. It lets the knife carry nice and low, retention is excellent, and it does allow for right-hand or left-hand carry.

The Grand does carry a bit tall in the pocket just because it’s a fairly bulky design, but the angle of clip does a great job of minimizing it. The weight of 4.73 ounces definitely doesn’t make the Grand a lightweight, but it’s more than acceptable for a knife like this.

This knife is a perfect addition to the Giant Mouse lineup. They have great lightweight and EDC options and even some very good gent’s knives, but like any good wrestling stable, they needed a big enforcer.

The Grand is going to fill that role very well indeed. Evidence can be seen by the fact that the first run sold out in just a couple of hours.

Good news is that by the time you’re reading this, they should be back in stock at many knife retailers. And you should definitely go check one out.

The Giant Mouse ACE line isn’t often considered when people are shopping for a new Spyderco or Benchmade or similar “mainstream” modern folder, but they definitely should be. 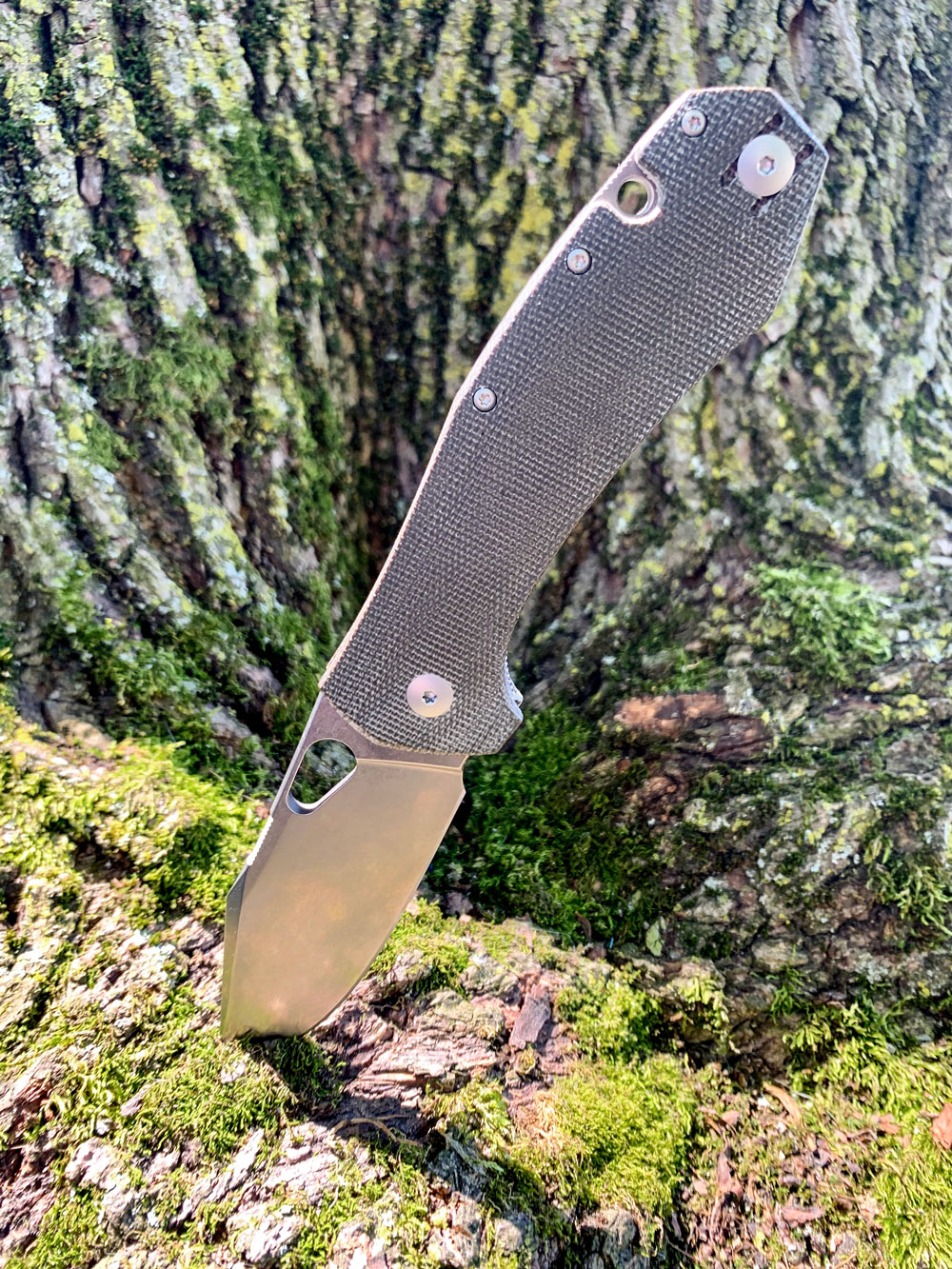 The Grand has a blade tip that is fine enough for detail work, but not too delicate for piercing. The Giant Mouse ACE Grand is perfectly at home in the outdoors or as your everyday EDC knife.