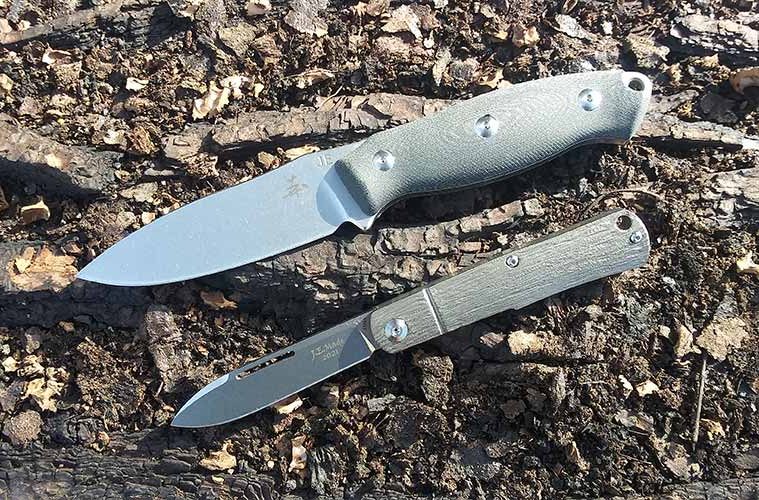 TAKING A LOOK AT THE J.E. MADE KNIVES

One of the drawbacks of being a professional knife person, meaning someone who earns at least part of their living reviewing, writing about, and otherwise playing with knives, is that you’re regularly discovering new-to-you makers and brands. Why is this a problem? Because I neither live in nor own a warehouse in which I can store knives.

J.E. Made Knives is a small shop in China. I know what you’re thinking—but hold on. These aren’t mass produced, stamped out of sheetmetal, and tossed at a grinder for a second before being boxed up and shipped out. J.E. Made knives are run in small batches and produced by an actual knifemaker who has spent years perfecting his craft.

“J.E. Made knives are run in small batches and produced by an actual knifemaker who has spent years perfecting his craft.”

The fit and finish on these J.E. MADE knives (Duty IV, top and Gunstock, bottom) are on point. They’re comfortable in hand and they perform flawlessly.

J.E. Made has a fairly extensive line of knives, well over a dozen different models with still more in development. After reviewing the ones currently on the market, I chose one fixed blade and one folder to evaluate. Let’s take a look.

This is a slip-joint folder, a classic design given a very modern makeover. It is available in a couple of different configurations, and I chose one with titanium scales. Upon taking it from the box, the heft surprised me. Even with the titanium, the knife weighs in at almost 3 ounces. Don’t get me wrong. It’s not like a brick in the pocket, but it definitely feels solid.

“I’d put these two knives up against any comparably priced American-made products.” 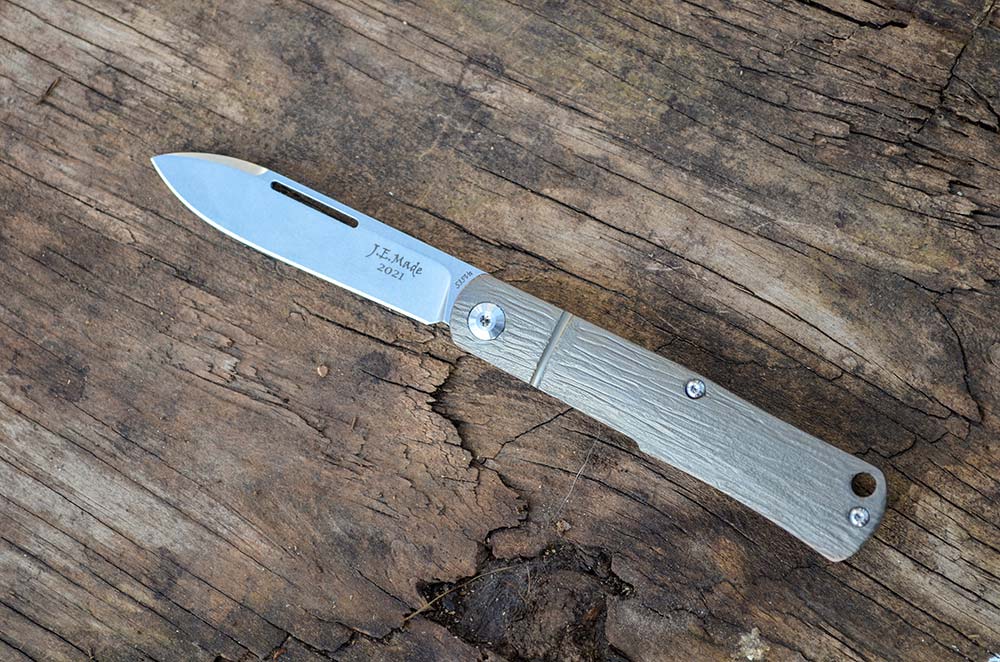 The Gunstock as a simple, classic design that’s been updated with ultra-modern materials. The drop-point blade profile is among the most common and useful patterns for folding knives.

One of the first indications that this is far from a stereotypical “Made in China” knife is the use of S35VN steel for the blade. On top of it being a fairly high-end steel, it has been given a very handsome stonewashed finish. S35VN is a stainless steel made by Crucible and is particularly known for its toughness.

The blade is a drop point with a very slight swedge. Instead of a nail nick or thumb stud, there’s a slot that runs just under an inch long. This works great, particularly because it is ambidextrous. The edge is absolutely razor-sharp right out of the box. It has a positive stop at 90 degrees as well as at full open. I wouldn’t say that the pivot is stiff, but it is tight on both open and close. The blade length falls right at that magic 3-inch mark that many of us prefer for an EDC folding knife. 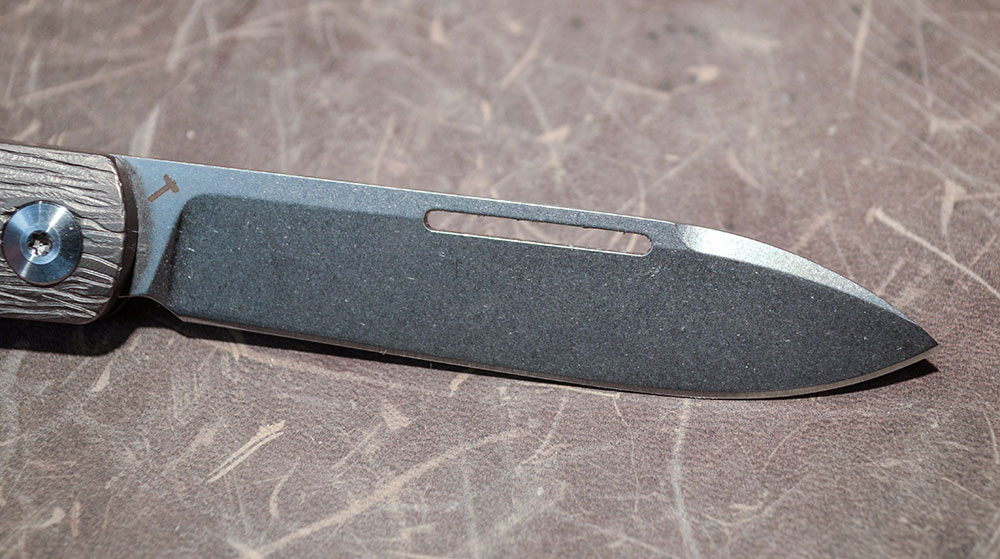 Rather than a nail nick, there’s an actual slot in the back of the Gunstock blade, allowing for ambidextrous opening. You can also see the slight swedge near the blade’s tip.

Closed, the knife measures 4 inches. With the weight of the knife, it is guaranteed to slide to the bottom of your pocket. If that’s not desirable, there is a thin pocket clip on the side, as well as a lanyard hole.

This model has titanium scales that have plenty of texturing for a positive grip. This particular pattern for the texturing is called “tree bark” and is done entirely by hand. The handle shape has a two-finger choil, which provides added comfort and security in the hand.

After carrying the Gunstock around for a few weeks, using it for things like opening boxes, cutting apples, and other routine chores, I put it through just three simple tests.

I started with a fabric web belt. The blade sliced through with zero hesitation, stops, or pulls. I applied perhaps a little more pressure than was absolutely necessary, which we’ll explore a bit more in a moment. Suffice it to say, though, the material posed no trouble at all. 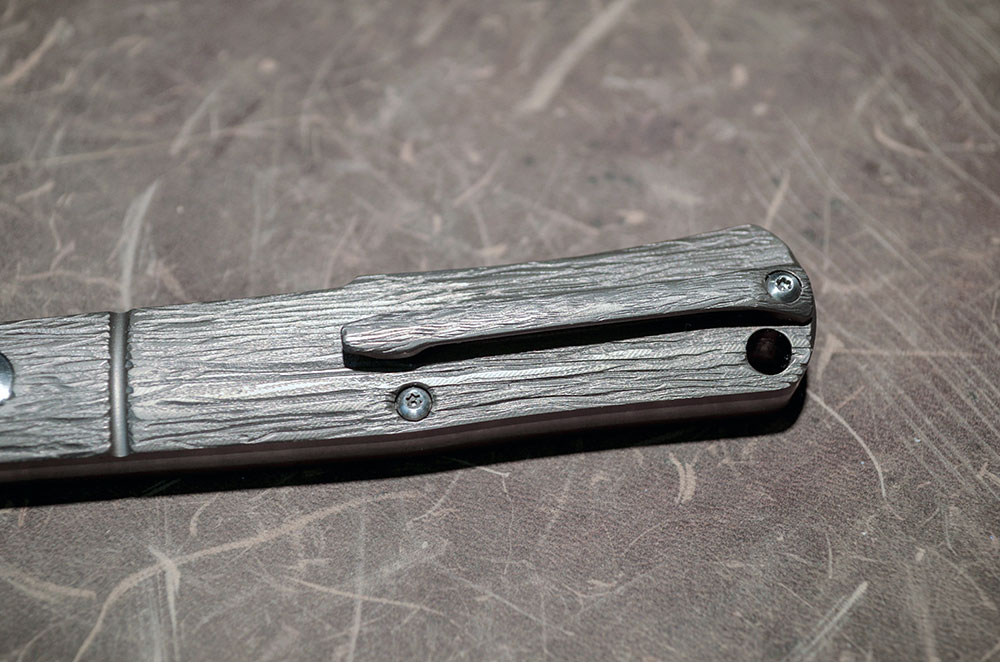 For those who like to keep their pocketknife clipped to their pocket, you’re good to go with the Gunstock. The “tree bark” texturing on the handle scales is done entirely by hand.

Then, I pulled out a hank of paracord and coiled it four times around my fingers. The blade cut through all four strands with minimal resistance. From there, I used push cuts to divvy them up into ever-smaller bits.

Both of these tasks led into the third test. One of the concerns of a folding knife is if the pivot fails. There’s no lock, so if you’re not careful the blade could close on your fingers.

However, I wanted to test the strength going in the other direction. I donned a thick leather glove and, after placing the knife’s edge on a stable board, I began applying steadily increasing pressure.

I have no way to accurately measure the force used, but I got to the point that my arm was getting tired from pushing and at no point did the knife even come close to failing. It remained rock solid.

As I said earlier, this is far from a typical “Made in China” knife.

This fixed blade is far nicer than it has any right to be at this price point. I absolutely love the handle, as it is exceptionally comfortable. It has generous palm swells and fills the hand without feeling awkward or clumsy. The overall contouring ends up with a shape that really locks into your grip. 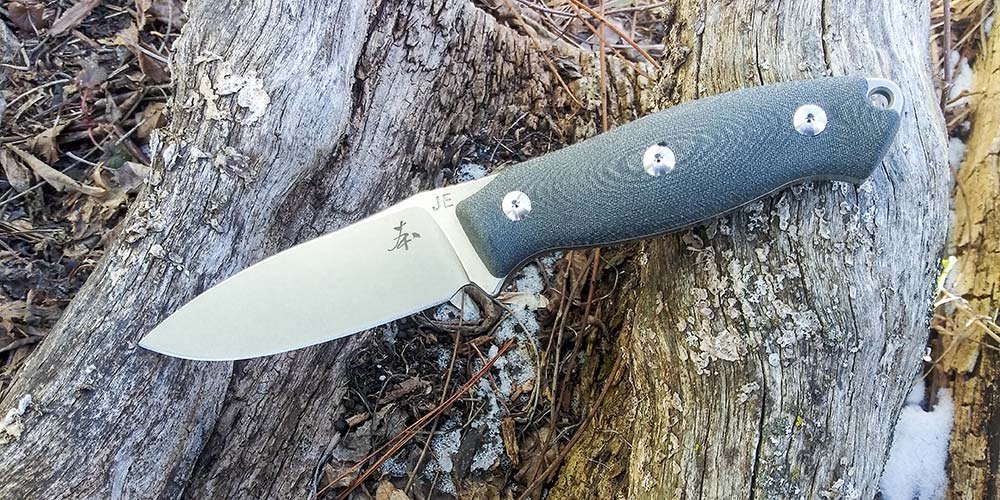 The Duty IV has sort of a chunky but rounded handle that’s ridiculously comfortable. And, if you look closely, you can see the slight dip on the spine of the knife before it extends out to the drop point.

The knife is 8.25 inches from end to end, with a 3.75-inch blade. As far as an EDC fixed blade, that’s just about the perfect size for most people. There’s plenty of edge to handle just about any common task. Another reason the Duty IV makes for a good daily carry is its weight at not even 6 ounces. That’s less than a hockey puck or a half-dozen pencils. 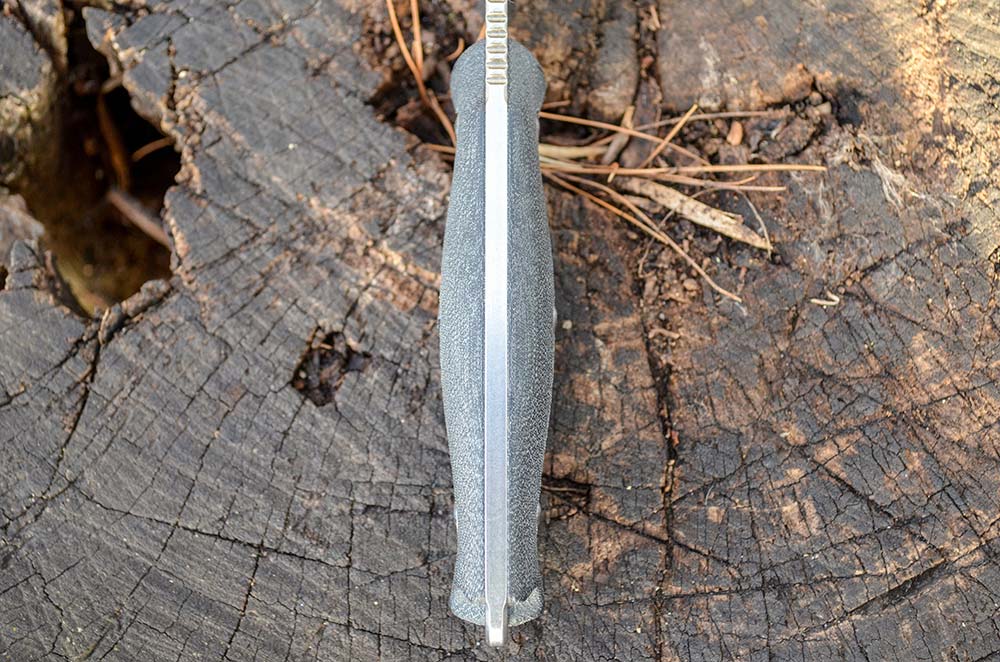 Here you can see the ballooned out palm swells on the handle of the Duty IV.

The blade is sort of a modified drop point profile, with a slight dip in the spine just ahead of a small bit of jimping. The overall effect is that it gives you a comfortable place to rest your thumb or forefinger when you’re working with the knife. The spine is fairly rounded, so it doesn’t dig into you while you’re holding that way, either.

J.E. Made went with 12C27 steel for this model. This is a Sandvik product that’s known for exceptional toughness and edge retention. It is a stainless steel, with 13.5% chromium, 12% being the minimum needed to qualify for the stainless designation. Morakniv uses this same steel in many of its knives. 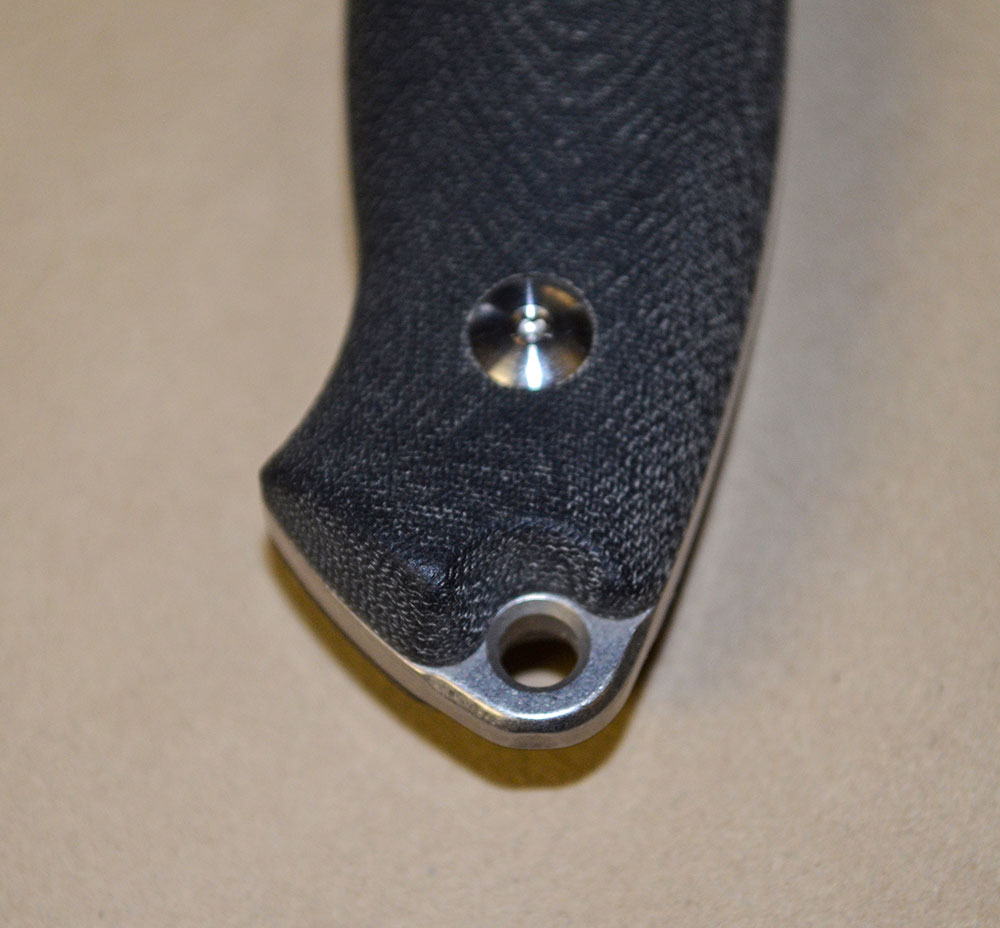 The Duty IV has a lanyard hole at the base of the handle, perfect for a hank of paracord.

There’s a lanyard hole at the base of the handle. Personally, I tend to favor lanyards only when they’re needed, such as to provide extra leverage or purchase when drawing the knife from a deep sheath. But, to each their own, as I know a lot of knife people like to adorn their daily carry blades with beads and such. The Duty IV comes with a Kydex sheath, and the knife is quite secure in it. The sheath has a thumb break that makes removing the knife easy, though. The sheath will fit a belt up to 2.5 inches wide. The belt clip is also removable, should you wish to lash the sheath to a pack strap or carry it in some other configuration. 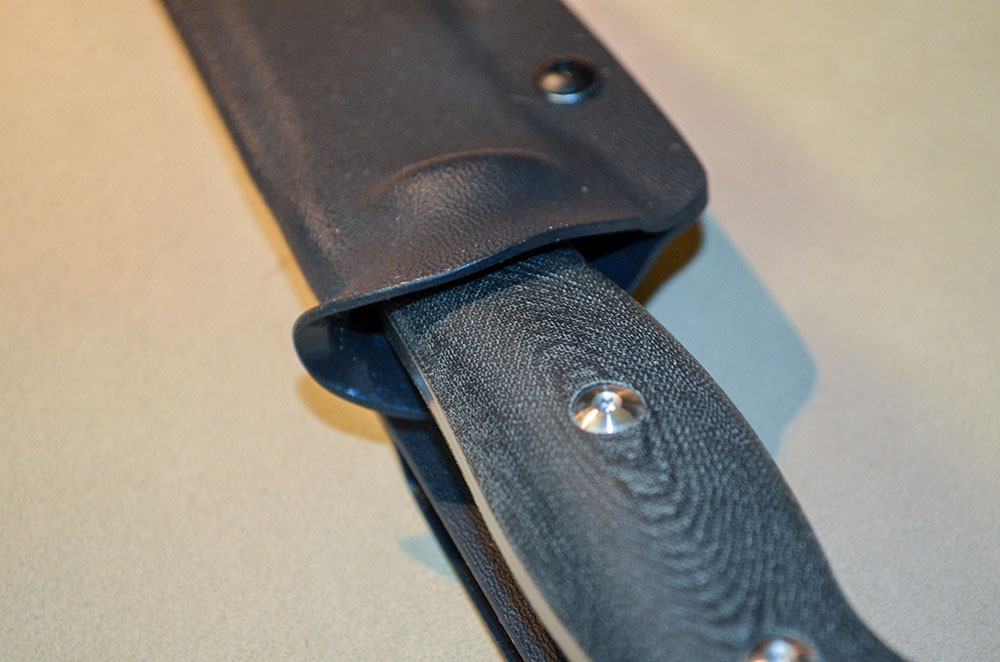 There is a thumb break on the Kydex sheath of the Duty IV, which allows you to draw the knife quickly without a struggle.

As with the Gunstock, I used the Duty IV here and there around the house before subjecting it to a couple of deliberate tests. For the first one, I pulled out a length of sisal rope. This stuff is nasty to cut, very tough and, if I’m being honest, kind of a pain in the butt. A push cut didn’t get very far, but I was able to saw through the rope fairly quickly.

Then, I grabbed an old leather belt and sliced off a few pieces. I was even able to lop some of it off using push cuts. That’s pretty impressive after dealing with the sisal rope.

At the end of the day, I’d put these two knives up against any comparably priced American-made products. The fit and finish on both of them are on point. They’re comfortable in hand, and they perform flawlessly. Don’t let the country of origin lead you astray on these. They’re worth a closer look. KI

WHY A SLIP JOINT KNIFE?

Among the most common types of folding knives, the slip joint utilizes a back spring to secure the blade open or closed. The blade doesn’t truly lock in place, but it doesn’t just wobble around, either. They’ve been around since the 1600s and are still popular today. 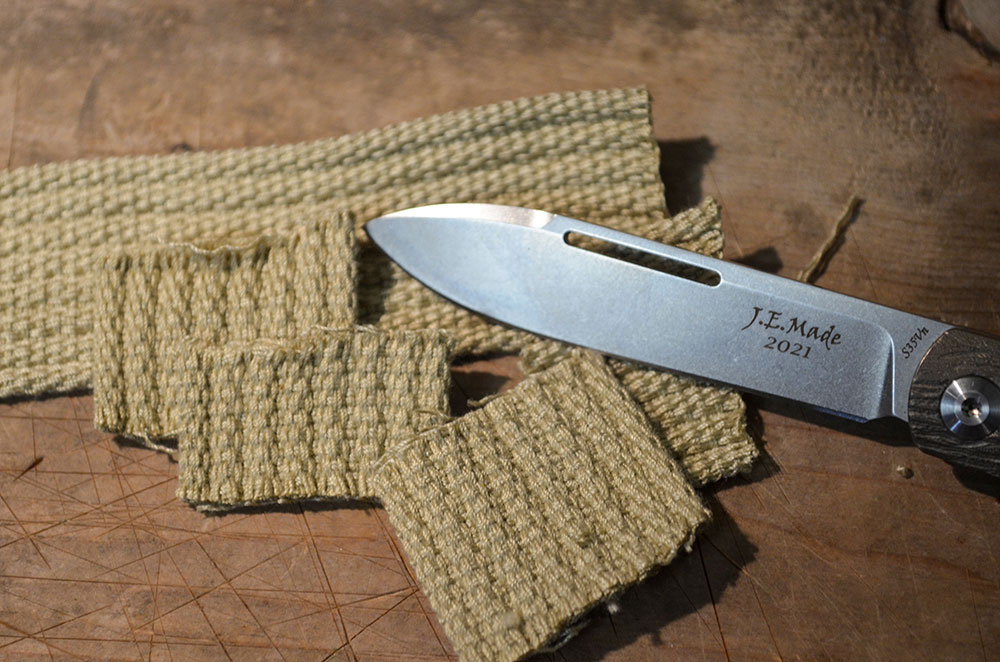 This web belt posed no trouble at all for the Gunstock. 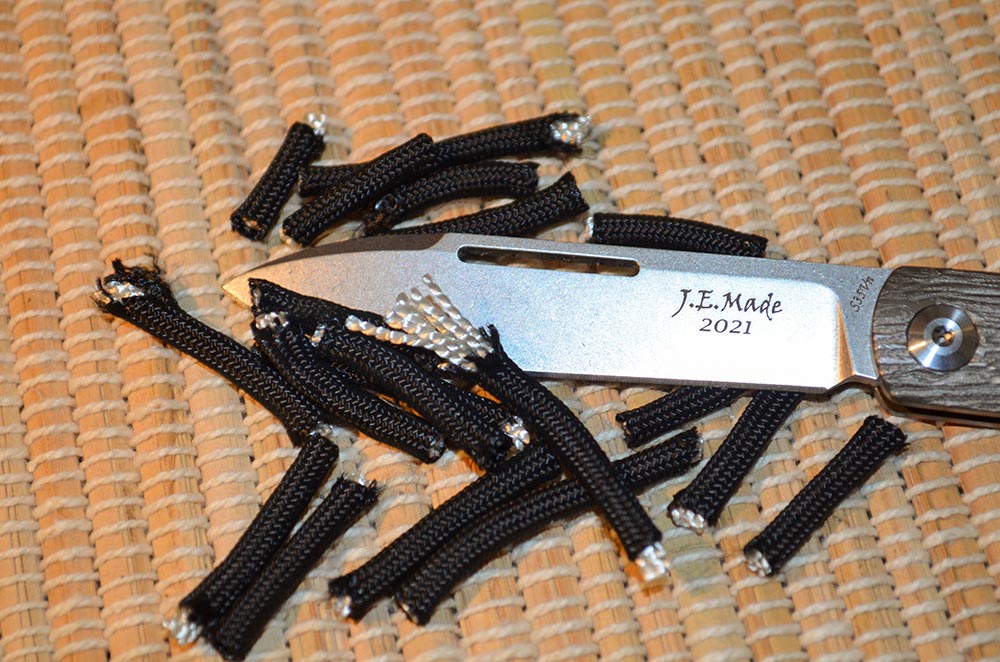 Push cuts with the Gunstock blade went through the paracord like it wasn’t even there.

One of the reasons why regular knife users tend to like them is that they don’t give you a false sense of security. With a locking folding knife, there can be a tendency to trust that lock perhaps more than is advisable, which can lead to accidents and injuries. With a slip joint, you know going in that you need to be aware of how you’re using the blade to avoid having it close on your fingers. 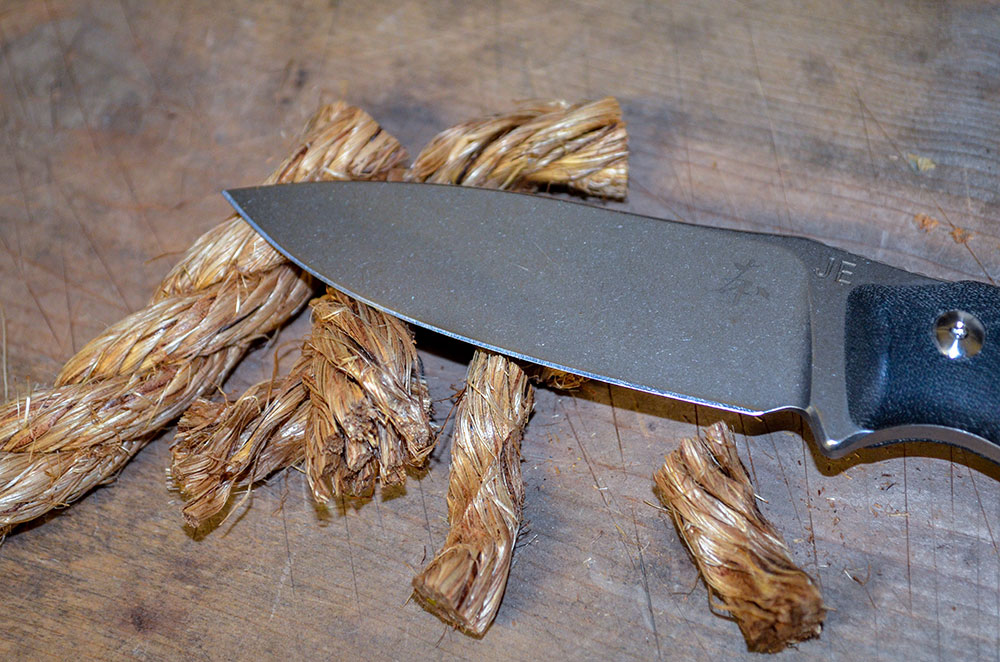 Sisal rope is nasty stuff, but the Duty IV sawed through cleanly. Dragging slices as well as push cuts with the Duty IV made short work of a leather belt.

Plus, they tend to be legal to carry even in areas that are otherwise fairly strict about knives. They’re a traditional sort of pocketknife and thus aren’t often seen as a weapon. When you see one, you don’t think tactical, you think Grandpa cutting up an apple while giving you important life advice.