Our review: Talk about amazing — with its XCOM knife, Kershaw has created a powerful blend of the old and the new. A knife that’s an ideal self-defense choice for a modern warrior.

Inspired by a classic traditional military knife, the Oregon-based company and custom maker Les George updated the XCOM for today’s unpredictable modern world. The result is a simple, yet efficient design for both everyday tasks and life-and-death applications.

“… WHEN COMBINED WITH QUICK, FLUID STRIKES AND REPEATED NON-STOP STABBING, THE XCOM WOULD DISH OUT A SIGNIFICANT AMOUNT OF PUNISHMENT …”

For those utility uses, the knife performs basic cuts to most of the materials you have around your house, but will it save your skin when push comes to shove? After all, there are some important factors to consider. For example, can the knife be easily secured and quickly opened? And how does it perform offensive and defensive self-defense techniques?

You’re about to find out how XCOM stacks up when things go down in the street.

At first glance, the XCOM appears to be a double-bladed dagger, but it only has one sharpened side. To avoid accidental injuries when closing the knife, this is especially useful. Plus, you can carry it as a concealed weapon in states that don’t allow you to carry a double-edged knife. The symmetrical blade ends with a prominent spear tip while the sharpened bayonet grind runs down the entire length of the blade.

Both the handle and blade are black, which is ideal when you are carrying at night because there are no reflective surfaces to give away its presence. Created from all-weather, glass-filled nylon, the handle has segmented grooves that keep the knife firmly in your hand. Although the literature says the handle fits a wide range of hand sizes, it was an inch or so too short to provide a solid and comfortable fit for me. As I moved the knife about, I continually had to reposition my pinkie finger on the handle. This hindrance didn’t prevent me from gripping the knife; however, it was a distraction as I performed various tests. 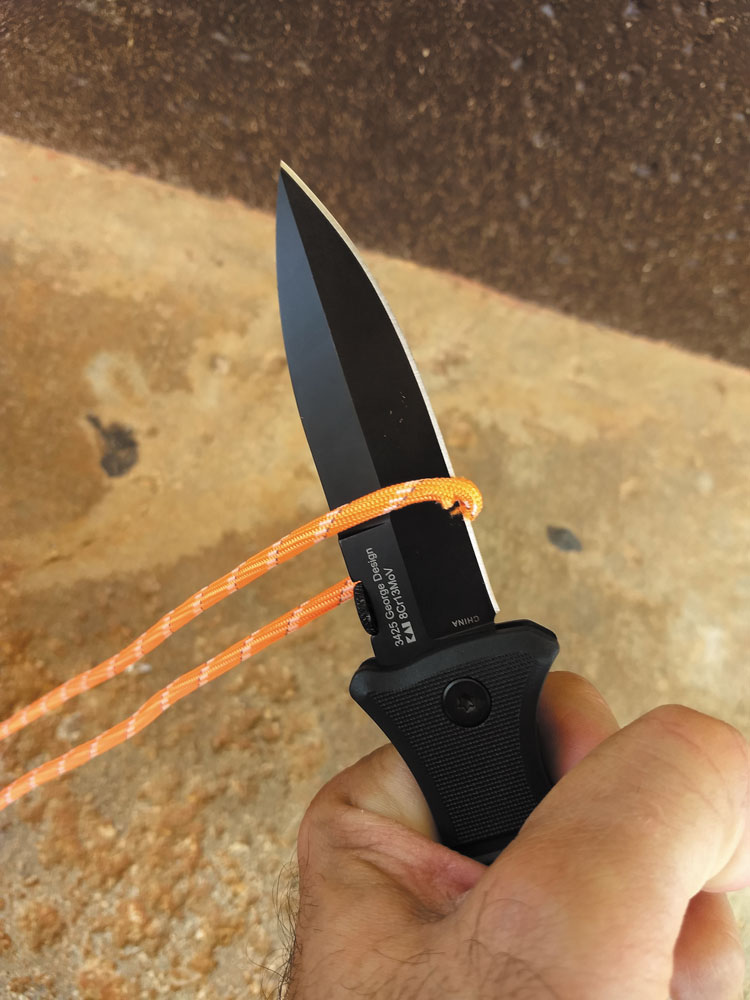 Cutting one length of paracord was a breeze for the XCOM. There was no resistance whatsoever.

To open the knife, just press the built-in thumb disc. This mechanism operated without hesitation each time. Initially, it felt awkward when I tried to push the blade outward and then upward to its locking position. After a few repetitions, I got used to it, and it posed no problems going forward.

The knife features a simple, yet strong belt clip. I secured it on my right-front pants pocket, and it stayed in place everywhere I went. When I sat down, the knife remained “locked” to the denim material.

All in all, the XCOM is a stylish knife. The weight ratio of the blade to the handle initially felt a bit off as the heavier blade dominated over the rest of the knife. At first, I did not like this. After further tests — and especially during blade/hand transitions — I realized this is a beneficial aspect of the knife, as you will soon learn.

Even though a knife may handle well during a physical confrontation (more on that soon), it is critical to test the blade’s cutting and puncturing ability long before you are face-to-face with an aggressive assailant. If you don’t know a knife’s limitations or abilities, you won’t know if you can depend on it. Consider this: If your knife-wielding combatant is wearing a heavy leather jacket, a long trench coat or a thick winter vest, can your knife pierce the fabric and do damage? You need to know; otherwise, you may end up in a hospital … or worse. Knowing the importance of this, I put the Kershaw XCOM through a variety of tests for this review. The results were encouraging and surprising. 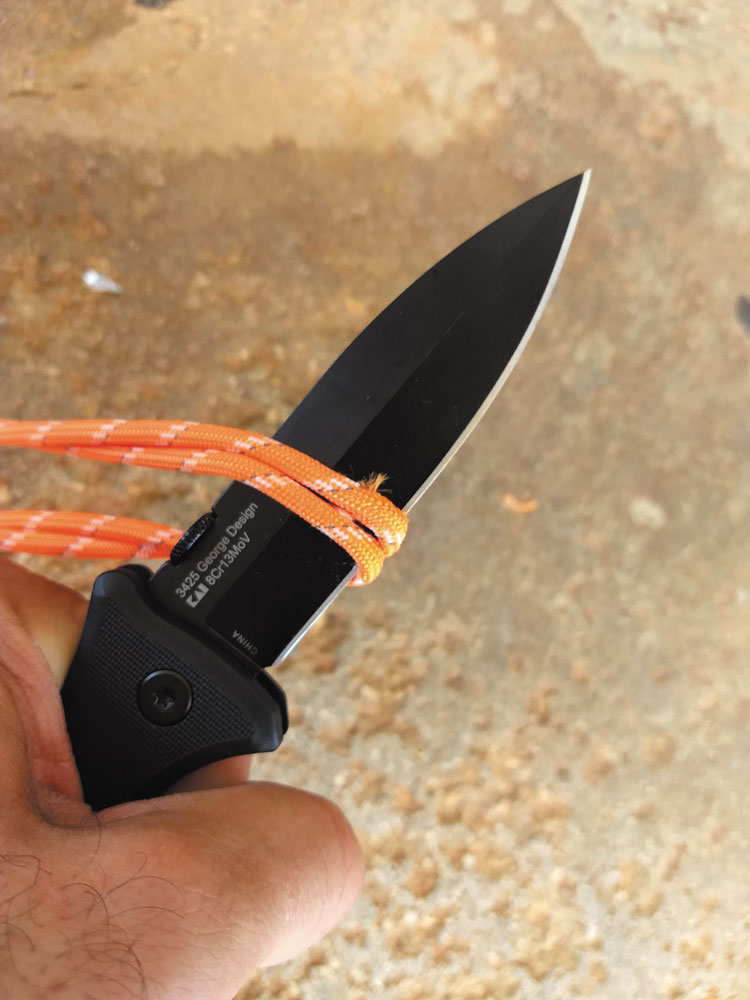 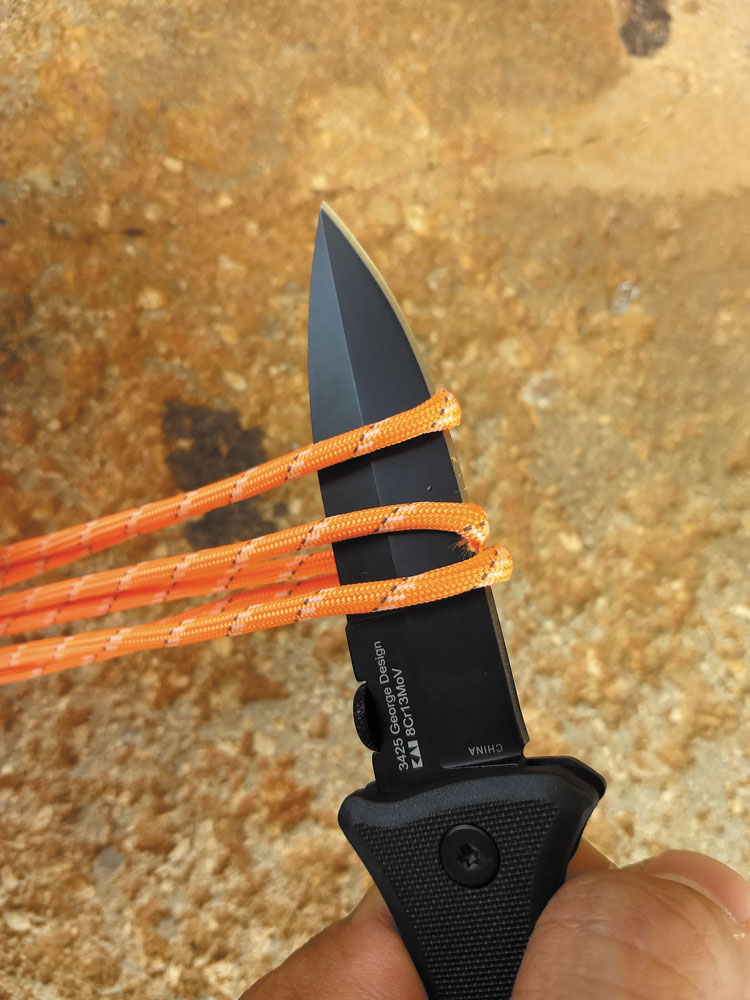 Two lengths of cordage didn’t slow down the XCOM knife.

I used three materials — cardboard stacks, numerous lengths of 550 paracord and denim jeans. I selected these items for their distinct differences, as well as their common, overall toughness when withstanding a knife’s blade.

To begin, I stacked four pieces of cardboard. Using a reverse grip, I snapped the knife forward, and it penetrated all the cardboard. To some, that may not seem impressive, but that test revealed a lot. First, cardboard is much stronger than you think. As a knife, scissors, or other cutting instrument penetrates the layers, cardboard usually pinches and clings to the blade. There was no such resistance with the XCOM. Also, I only jabbed the stack of cardboard. I did not drive my arm fully through the material. This quick stab penetrated all four layers with ease. 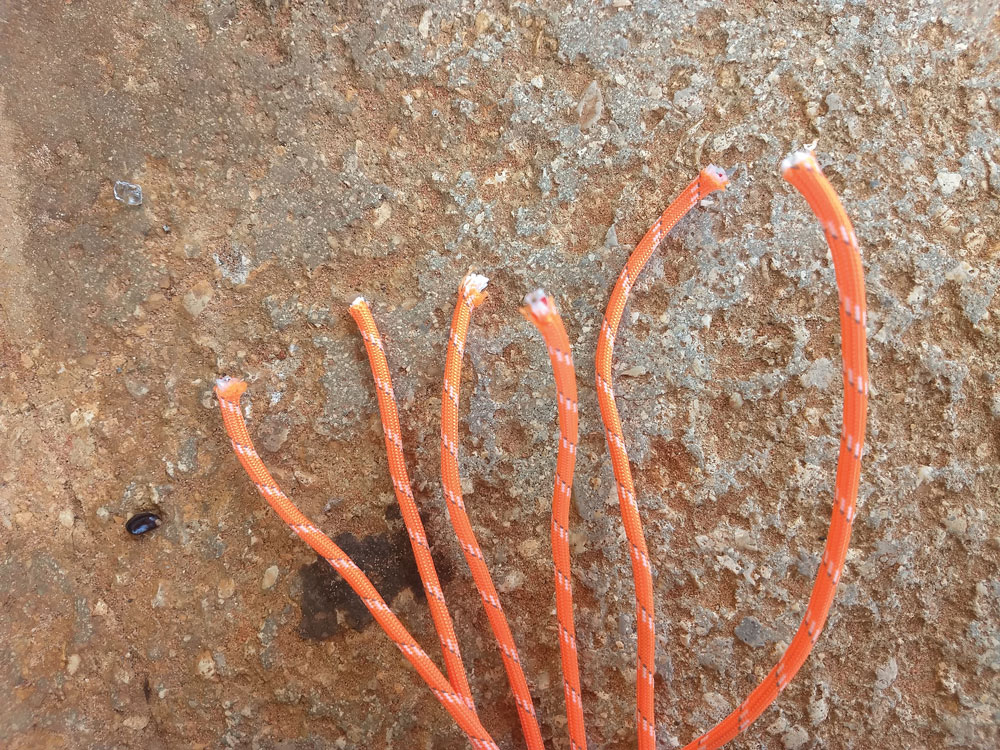 The knife also cut through three strands. To do so, I used just a bit of force.

The paracord was next. I started with one piece, and the XCOM cut through it with no effort whatsoever. Two strands at the same time? No effort, no problem. I then put three pieces across the blade. With a quick pull, the knife cut through them all. The blade did the job against the tough paracord without a snag or the smallest hint of hesitation. 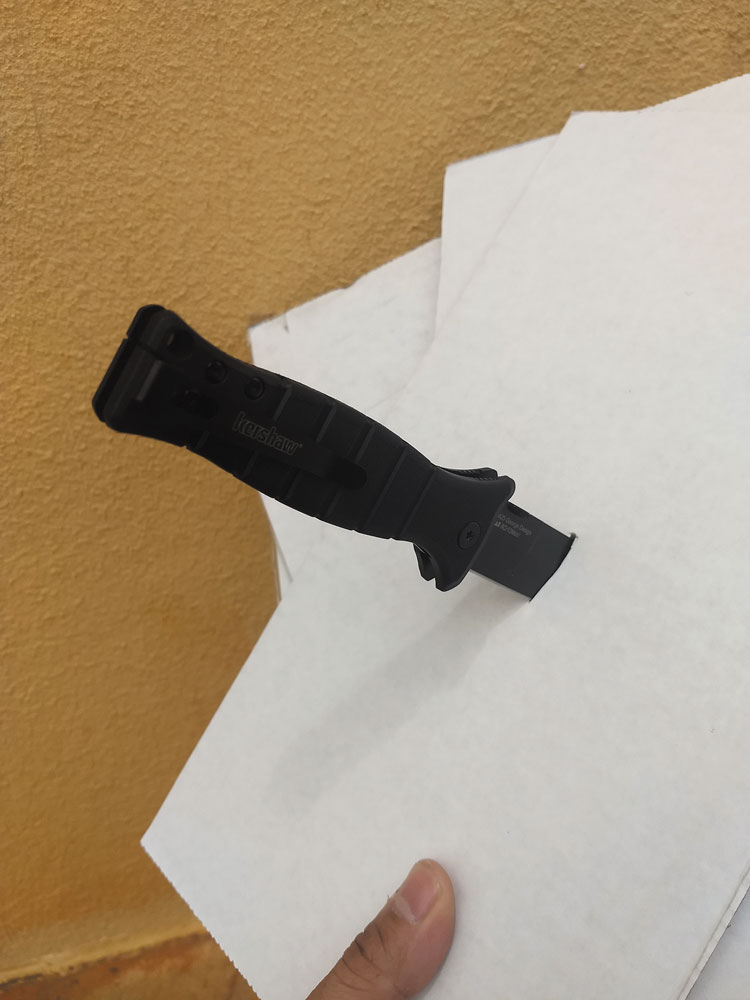 Four pieces of cardboard were no match for the puncturing power of the XCOM.

Denim comes in various thicknesses and quality. The pair I chose was in the middle range for both. Stretching the jeans as if an attacker were wearing them, I sliced through the denim. The blade literally flowed effortlessly through the material. The knife’s performance solidified my conviction that the blade would have passed through the clothing easily and dug deep into the attacker’s skin, inflicting great damage. 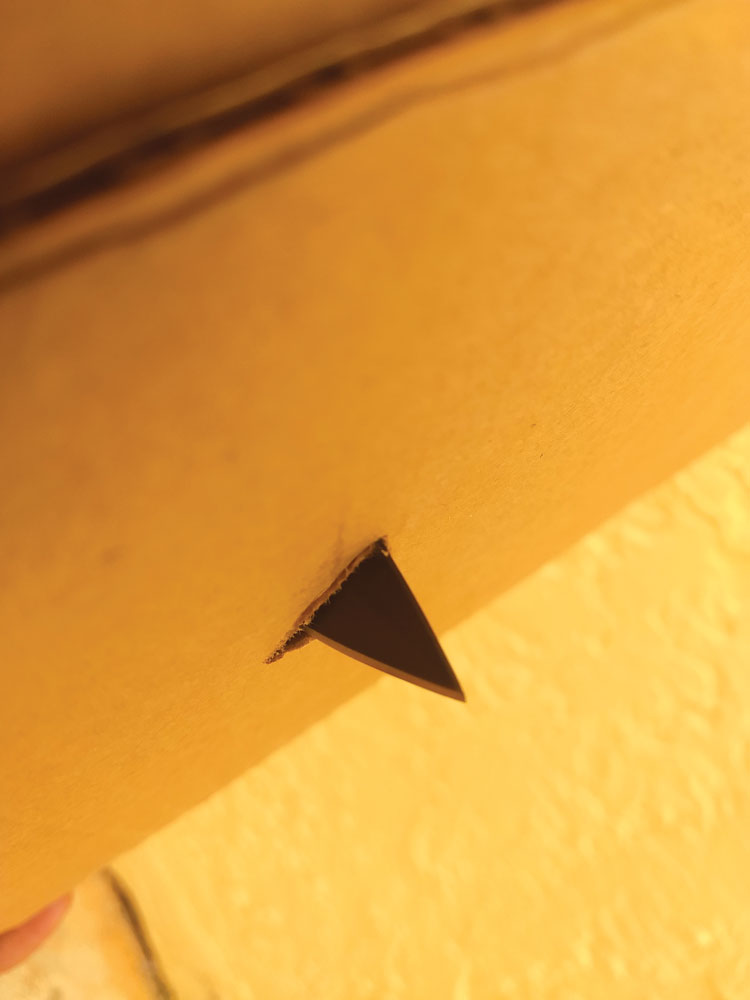 With just a flick of my arm, the tip of the XCOM penetrated the four sheets of cardboard nearly 1 inch deep. 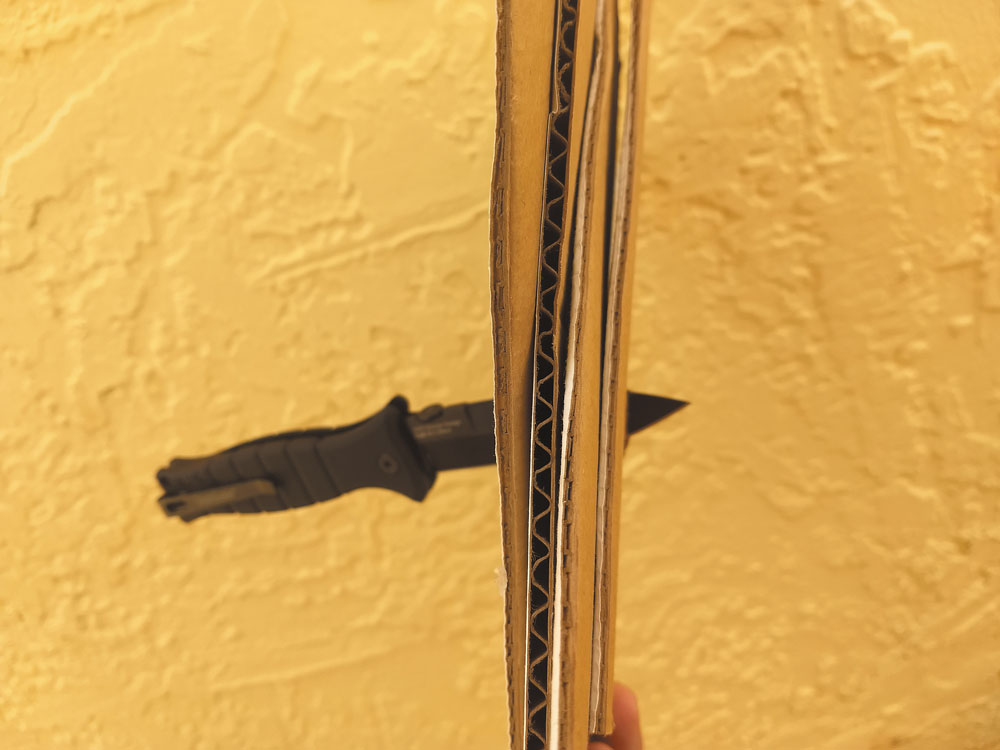 Cardboard may appear as a flimsy, weak material, but the multiple folds and adhesives give many blades a run for their money.

There are sharper knives on the market, and there are tougher knives on the market that would push the XCOM down a few notches in a side-by-side cutting or puncturing test. However, when combined with quick, fluid strikes and repeated non-stop stabbing, the XCOM would dish out a significant amount of punishment on an attacker that would allow you to escape, or severely injure him, causing him to run away.

As noted, the knife is intended for concealed carry and more specifically, offensive and defensive self-defense applications. To measure its effectiveness, I put it through mock simulations with a partner. Before I delve into those applications, I should mention that I have been on both sides (offense and defense) of a knife in my aikido and ju-jitsu training. In both arts, I have earned my black belt, and it’s this extensive training that convinced me the XCOM should always be within reach. I say this for a number of reasons.

“IF YOU DON’T KNOW A KNIFE’S LIMITATIONS OR ABILITIES, YOU CANNOT GUARANTEE IT WILL DO WHAT IS NEEDED.”

It did not take long to determine the first combat application — multiple uses for the non-sharpened side of the blade. Combined with a solid reverse grip and the blade’s durable construction, I discovered that the dull side makes a great tool to perform an elbow lock, neck pinch, and leg takedown. I executed all of these with relative ease, too. These techniques require a solidly built tool (weapon), and the XCOM exceeded those standards. Plus, the blade length was nearly perfect to perform all of the techniques. It was not so long that it became cumbersome or too short that it stymied the effectiveness of any of the moves.

The XCOM holds snugly in your pocket with the integrated belt clip. 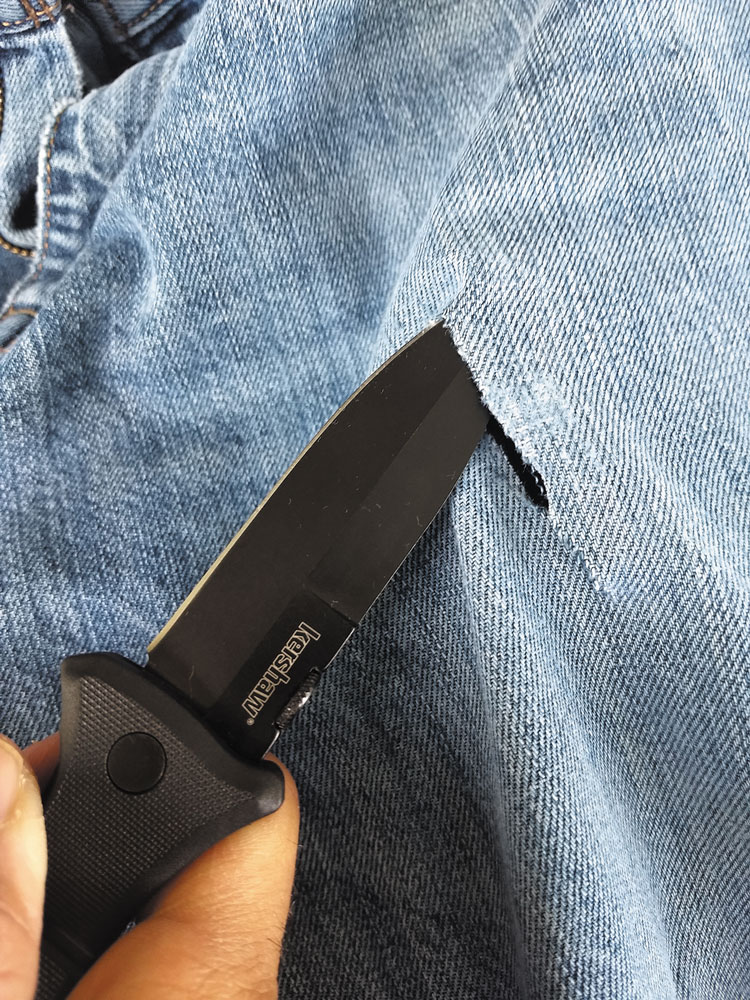 The XCOM sliced through denim with no effort or difficulty.

To parry an opponent’s arm without causing cuts or slashes, the blade’s dull edge was also useful. This may sound like a negative when discussing self-defense, but that is not the case. Self-defense is a complicated subject. If the situation doesn’t call for inflicting serious injury or deadly force, it’s best to avoid them. 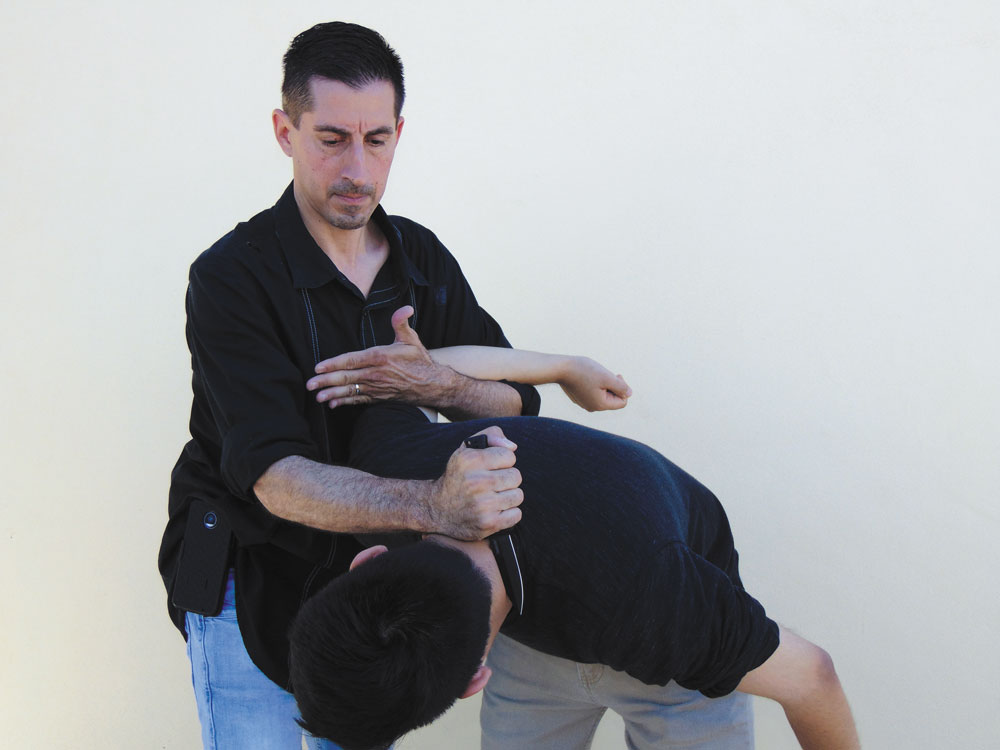 Using the back, non-sharp end of the knife, you can control an attacker’s neck and secure him.

In reality, defensive knife fighting becomes offensive knife fighting as soon as you are the victim of an unprovoked attack. Remember, if someone starts something with you, then it’s on … and you need to finish it. As mentioned, the XCOM exhibits an unbalanced blade-to-handle ratio, and this is where that characteristic becomes beneficial. During a knife fight, it often becomes necessary to change your grip from a standard to a reverse grip. This enables you to seamlessly go from slash mode to puncture — and vice versa — without hesitation. The heavy blade (in relation to the handle; the knife itself is only 4.20 ounces) enables you to use little effort to “flip” the knife to either position. This transition happens in fractions of a second. When dealing with a knife-wielding attacker who is bent on ending your life, this time frame matters greatly.

A knife is not just about the blade. Many forget that the handle is an integral part of a knife’s defensive capabilities. 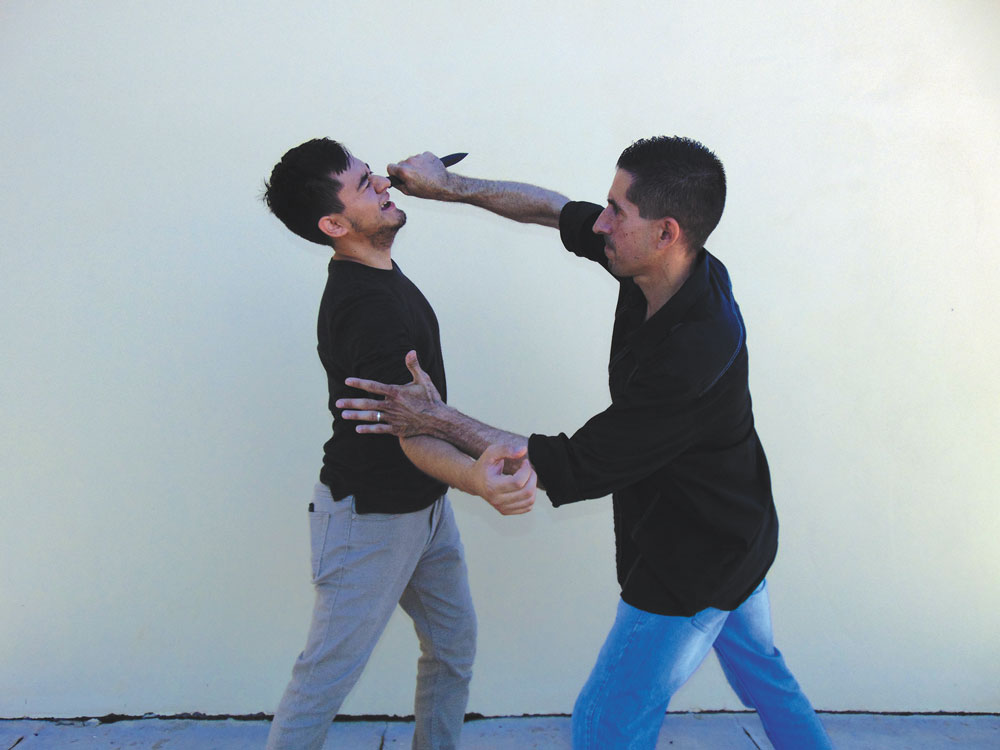 Using the butt of the knife, strike the attacker’s vital areas 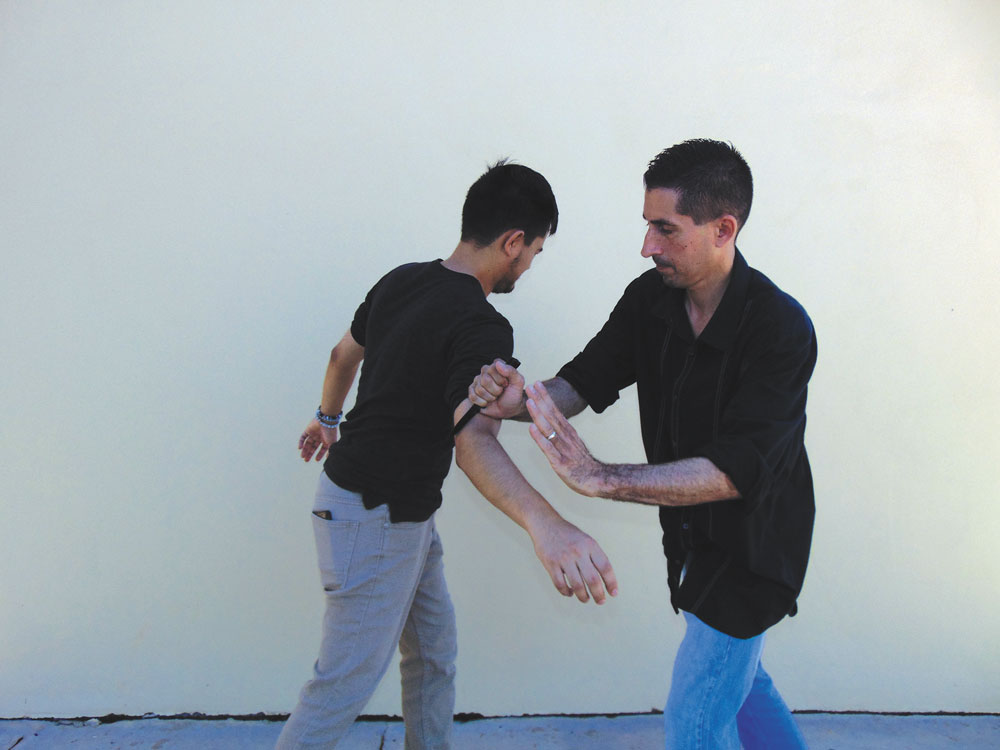 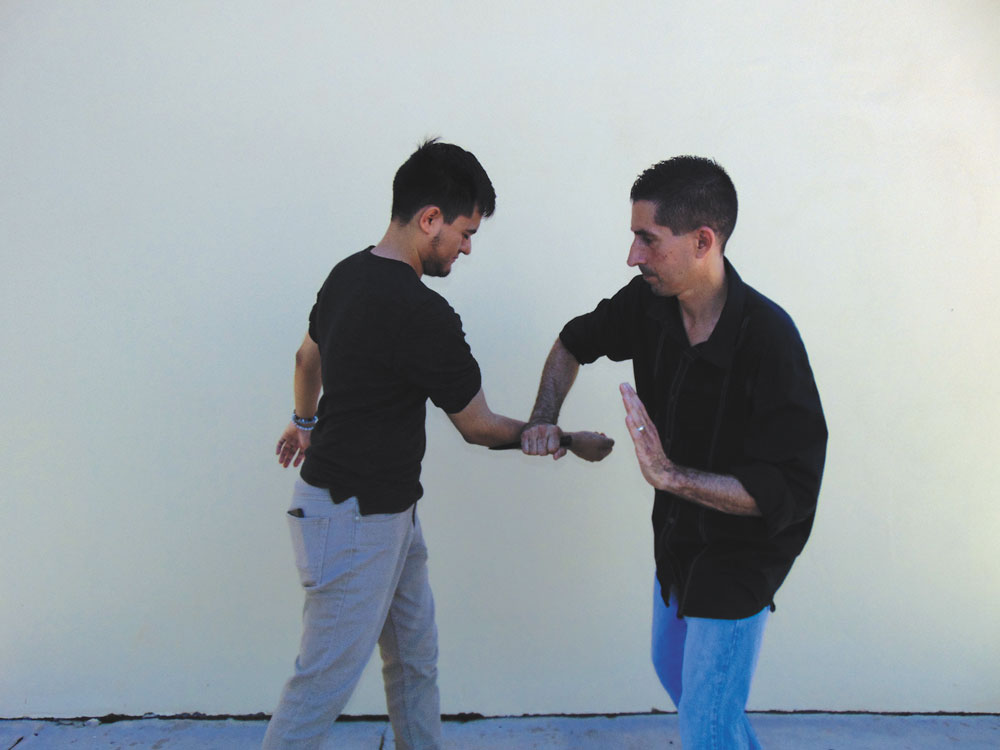 and clear the arm out of the way

The handle, for example, can be used as a locking mechanism on an attacker’s joints, much like the dull side of the blade can be. Due to the XCOM’s length or perhaps the size of my hands, I could not use the handle to secure an attacker’s joints. There just was not enough room on the handle. Even if I were lucky enough to secure an opponent, the lock may slip off during my movement. Thus, there is a trade-off: the size and concealability of the XCOM versus the ability to utilize it as you would a knife with a longer handle. Of course, others may not experience this problem. 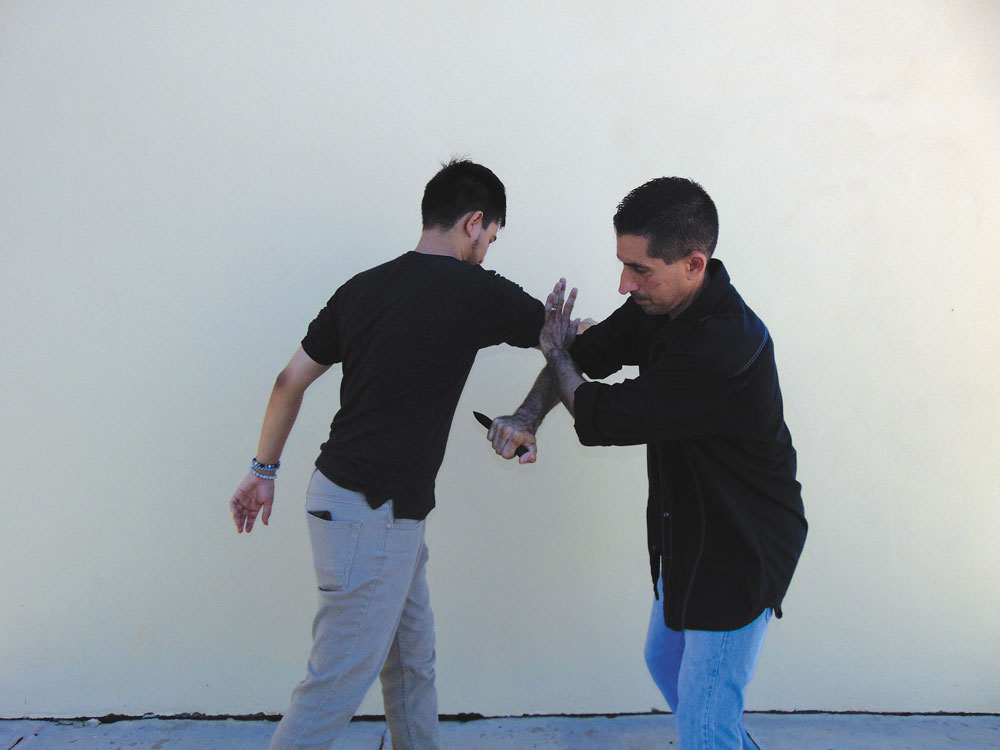 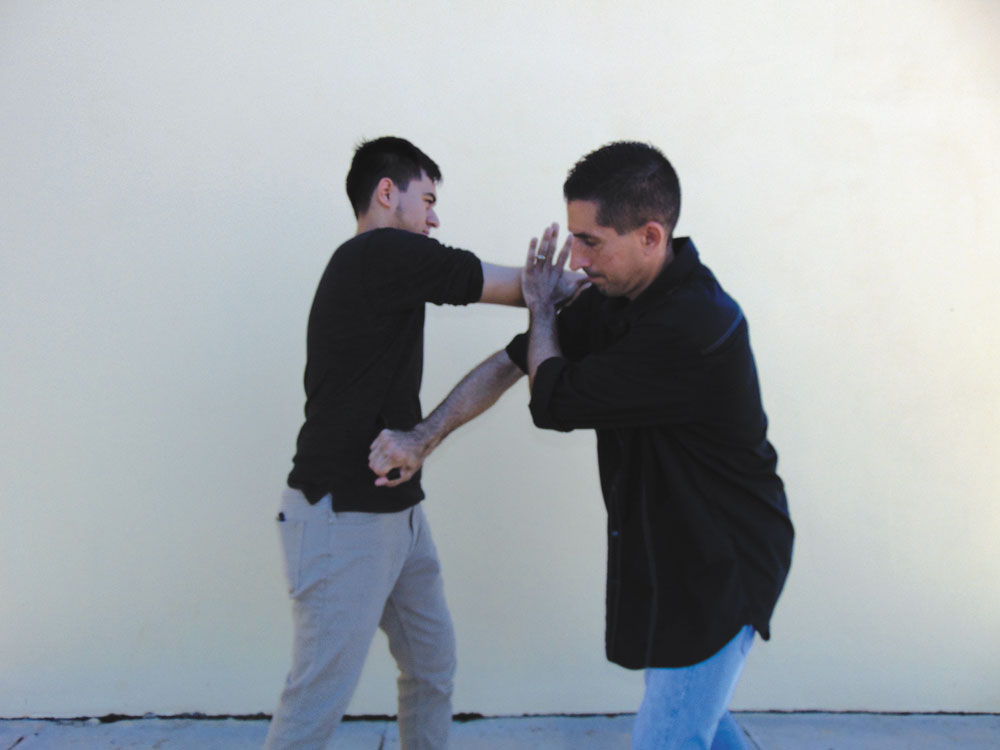 Cut across his midsection 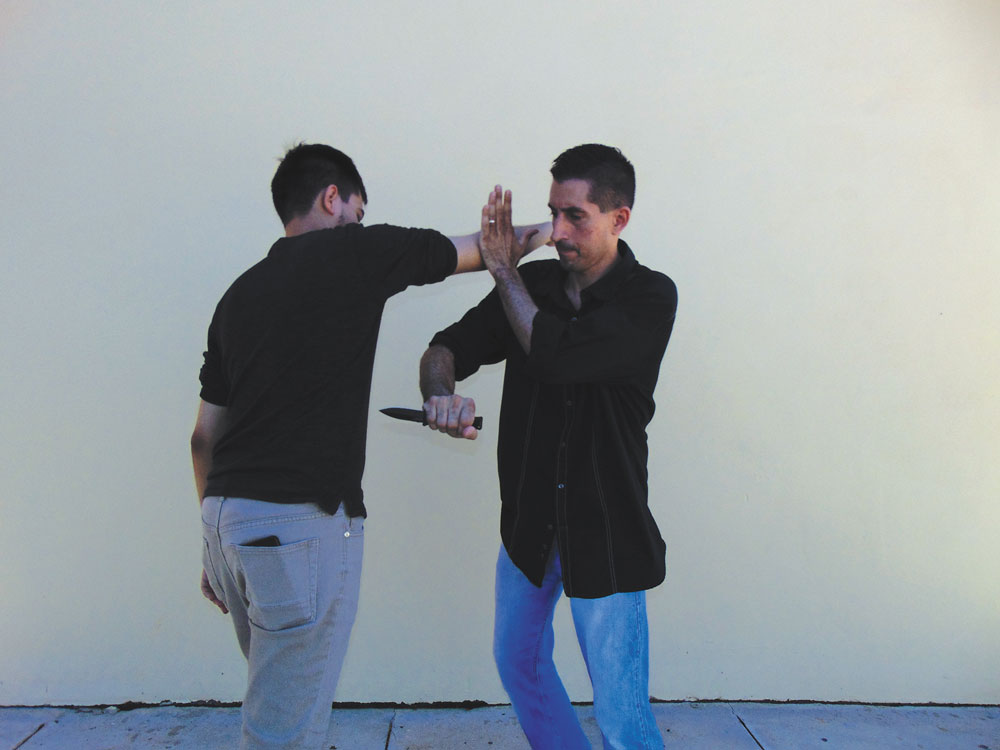 finish with a puncture strike to his rib cage.

The butt of the weapon (the end of the handle) can also be used as a blunt striking object. With its protruding end, the butt would be effective during an attack, as it would direct all the power from your arm through the tip of the handle with pinpoint-like precision into the attacker’s nerve endings, muscle fibers, eyes, throat, groin or floating ribs.

There you have it. As shown in this review, the Kershaw XCOM is a highly useful knife for concealed carry. It’s compact for your pants pocket and large enough to get the job done, whether it’s protecting you from an aggressive attack or fighting your way out of an otherwise no-win situation.

“… ITS CONSTRUCTION, FUNCTIONALITY AND CONCEALABILITY MAKE IT THE PERFECT CHOICE FOR TODAY’S MODERN WARRIOR.” 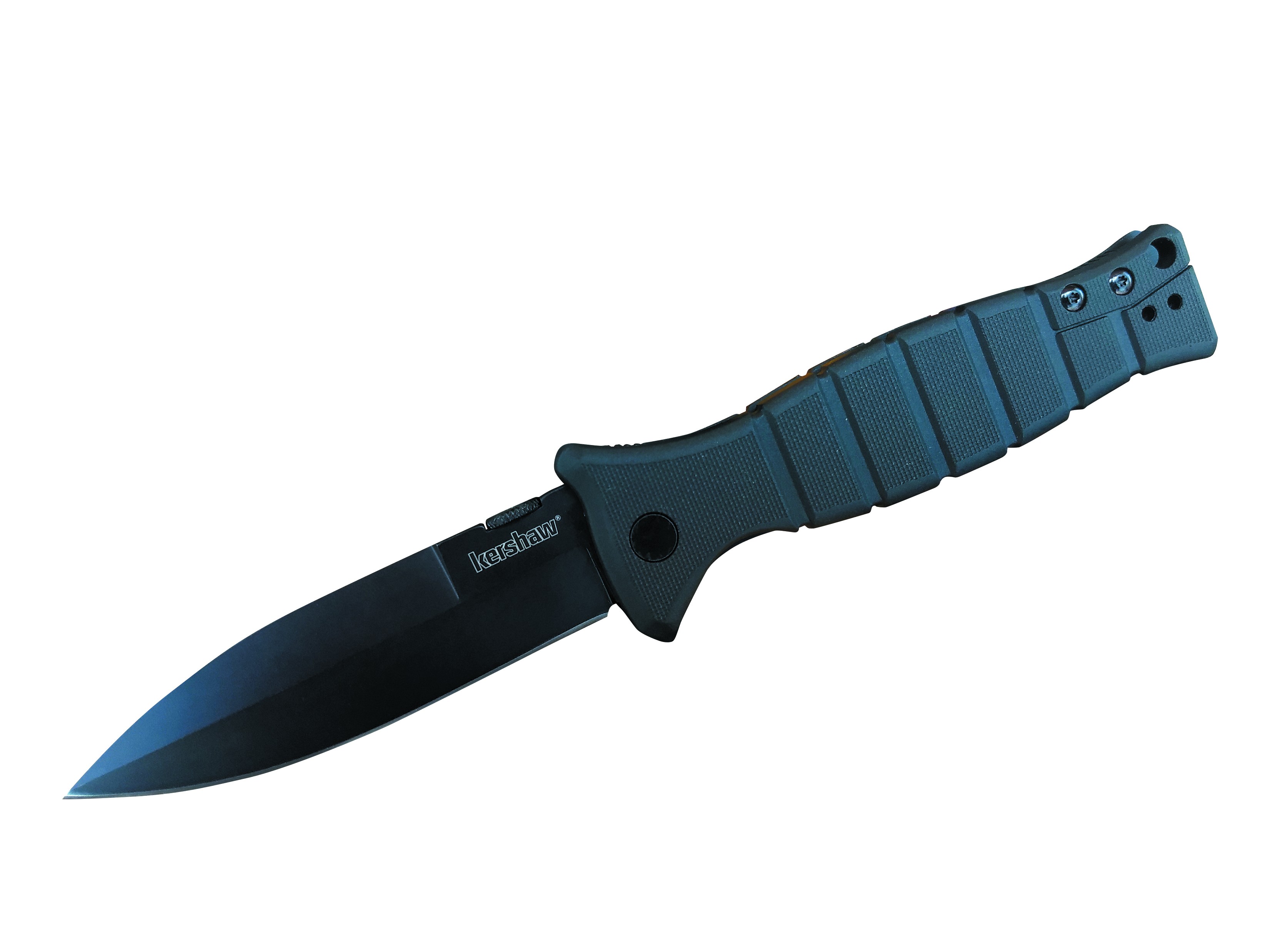 To create this tool, Kershaw stepped back in time and used a trench knife for inspiration, but the XCOM knife’s construction, functionality, and concealability give it a modern flavor, making it the perfect choice for today’s modern warrior.

For more Knives Illustrated knife reviews, go here and don’t forget to keep in touch with us on Facebook and Instagram!