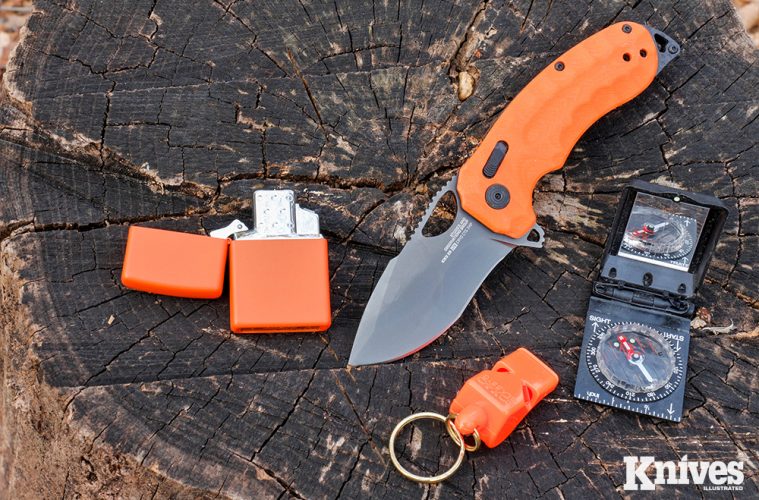 THE SOG KIKU XR LTE SHAVES SOME WEIGHT, BUT IS STILL A HEAVYWEIGHT PERFORMER

Light isn’t always right. When you take something great and make a “light” version of it, you don’t necessarily end up with something better. Make a firearm lighter and you get more recoil.

A light beer might taste watered down. And a light version of a knife might not have the right balance or feel. It might seem flimsy, less durable, and lack some of the cutting power of the original.

In the case of the SOG Kiku XR LTE, however, this lighter version of one of the favorites among SOG folders might just be the right balance of size, weight, and performance. 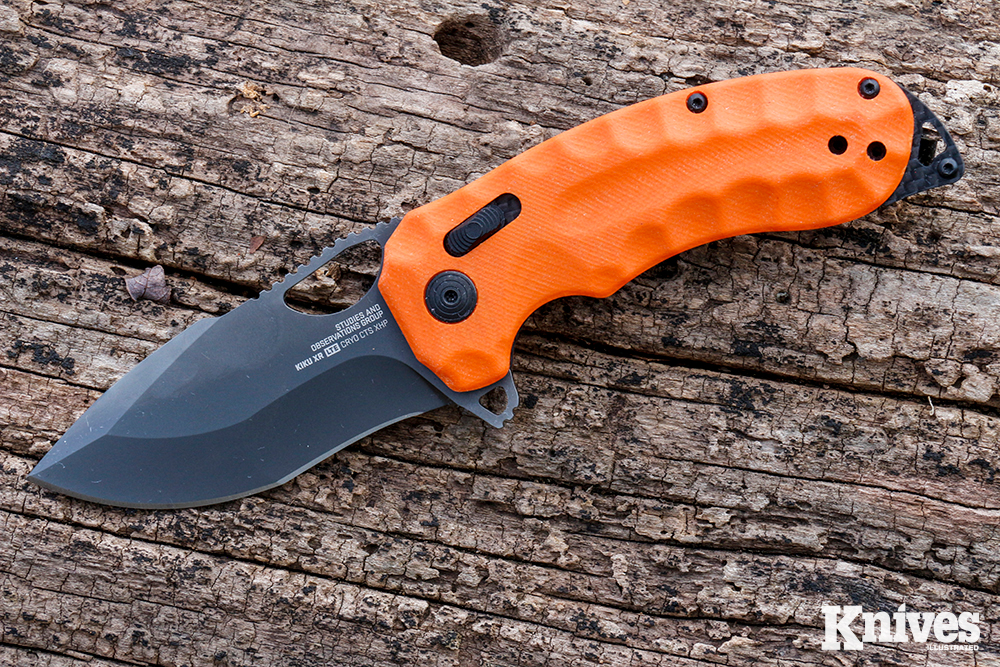 So, what is the SOG Kiku XR LTE? By the numbers, it’s a folding knife with a 3.02-inch blade that measures 4.29 inches closed and 7.34 inches overall when open.

It weighs 4.1 ounces, and that’s where the “LTE” for “light” comes in. The standard Kiku folder in this configuration weighs 5.6 ounces. So the LTE model shaves about 26% off the overall weight. SOG has done this by using carbon fiber liners instead of steel but keeping the blade beefy for this size knife.

You don’t think that weight reduction is big deal? Ask yourself that question again after covering miles of rugged terrain when every ounce in your pack and on your person does indeed make a difference.

For everyday carry, when you consider all that you want to take along, it can make a difference between a belt being sufficient or needing suspenders and a winch to keep your pants up. 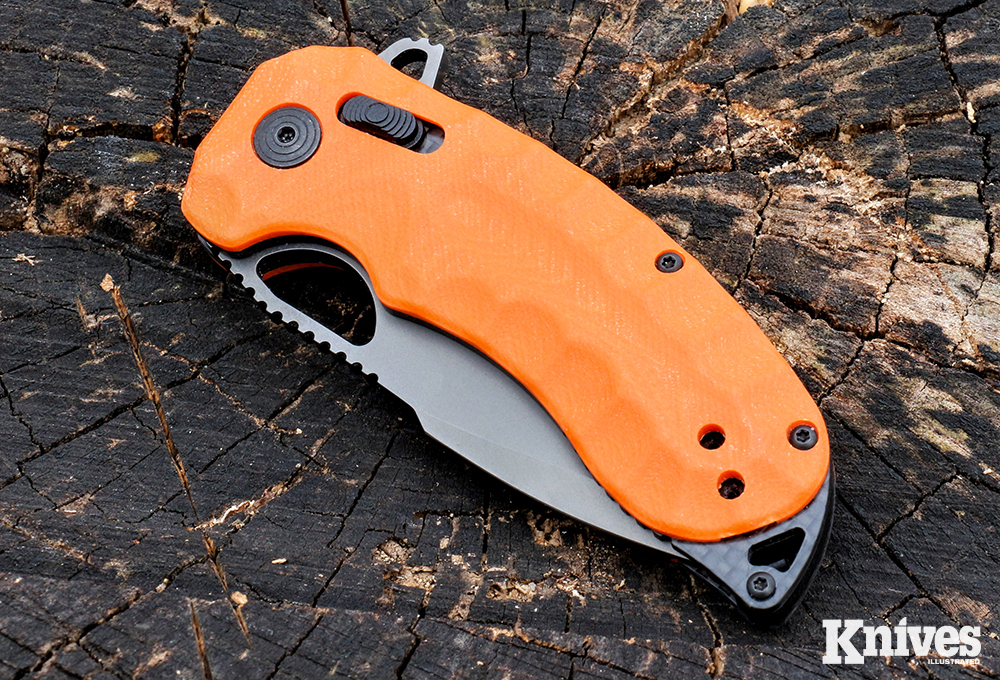 Closed, the SOG Kiku XR LTE measures 4.29 inches. That, together with its weight of just 4.1 ounces, makes it a pleasure to carry daily

If this Kiku folder looks familiar, it’s because it’s the latest in a special line of SOG knives.

“SOG’s Kiku line of knives are the result of working closely with the Japanese master bladesmith Kiku Matsuda,” said Beren McKay, vice president of development and innovation at SOG. “Our goal at the time was to blend the fundamentals of SOG’s traditional Bowie knife with the modern elements of Kiku’s master bladesmithing.”

McKay explained that SOG’s founder, Spencer Fraser, worked for many months with Kiku to produce the correct balance of East meets West characteristics. 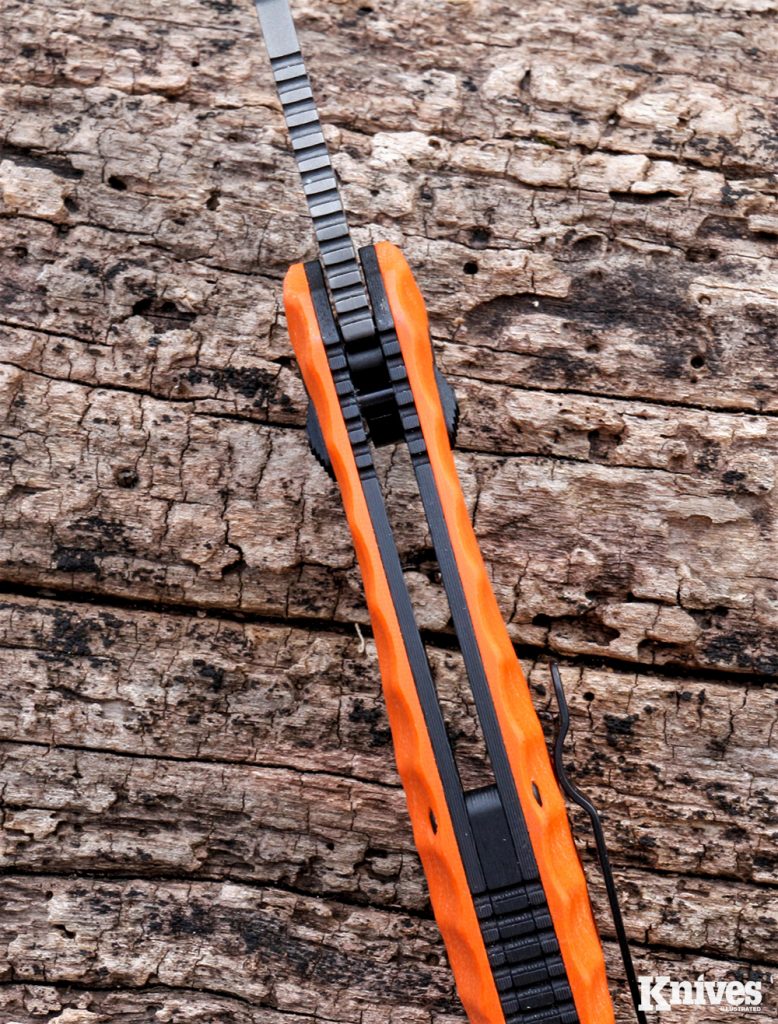 The open back design keeps lint and other debris from becoming trapped between the liners and in the folding mechanism.

“The resulting award-winning knife released in 2007 became the seed for this entire family of knives,” he said. “Several years later I took that seed and used it to design SOG’s current Kiku line of knives.

The first of these knives was released in 2014. The half dozen Kiku knives that we have released since 2014 all contain variations of the unique blade shape introduced with that 2014 model.”

The blade of the Kiku XR LTE is made of CTS XHP steel. This alloy provides a high degree of corrosion resistance as well as excellent edge retention. The blade has a subdued gray finish.

I like the blade design of the Kiku a lot. SOG refers to it as a modified tanto. While at first glance it looks as if it’s a drop-point blade, a closer examination shows that there are two distinct edges on the blade.

Usually, you recognize a common tanto by its two straight edges, with one angling sharply to the blade’s tip. The Kiku’s blade is different. McKay explained the thinking behind the blade design.

“I designed the unique shape of the blade in order to harness several key functionalities,” he said. “The belly is composed of a hollow grind so that it provides a thin sharp edge, and the belly has a slight recurve to provide a longer cutting surface that will draw what is being cut along the surface as well as provide the user with a greater amount of control while cutting.

“It’s a sharp knife that’s well configured front to back and it will handle most anything I need a knife to do…It’s easy to carry and fast to deploy.”

“The modified tanto tip is composed of three elements,” McKay said. “First, the shape of the tip is not straight like American tantos but rather it is curved like the original tips of samurai swords.

The curve provides a much more functional tip because much like the recurve in the belly of the knife, this curve will draw what is being cut along the surface to provide a better cutting motion. Second, the tip is flat ground which provides greater strength. Last, the tip swedge, (or top grind) is there to help refine the tip of the blade for better penetration.

“Combining all of these elements creates this unique shape,” he continued. “When trying to classify it, I felt that it most closely matched with the functionalities of a tanto knife, but since it utilized both ancient and modern blade characteristics, I called it a modified tanto.” 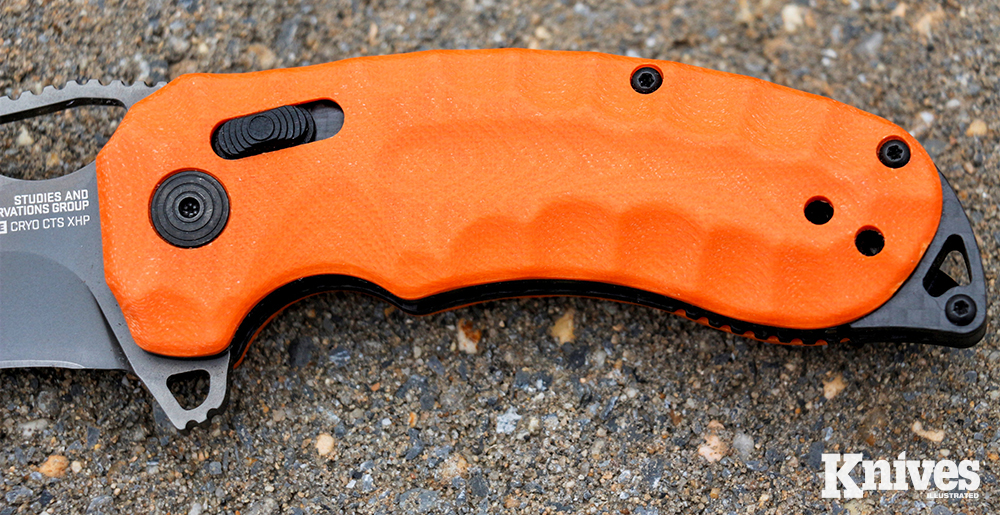 The handle scales of the Kiku XR LTE are well contoured and provide an excellent grip. The XR lock is rated to withstand 1,500 pounds of force.

The Kiku opens quickly and easily with three options on how to do that with one hand. There’s the flipper on the back of the blade with jimping for sure-handed operation.

There’s the oblong thumb hole and there’s the XR lock release itself that, once pulled back, allows you to open the blade with a flick of the wrist. Any of those methods can be used with either hand.

There’s a bit of initial resistance to overcome to open the blade before it begins to swing freely into the locked position. That’s a good thing. The knife’s pocket clip can be positioned for either right- or left-handed tip-up carry.

A knife carried that way that has an easy pivoting blade—especially one that also has a flipper—might open slightly in your pocket and jab you. Get the point? I have. 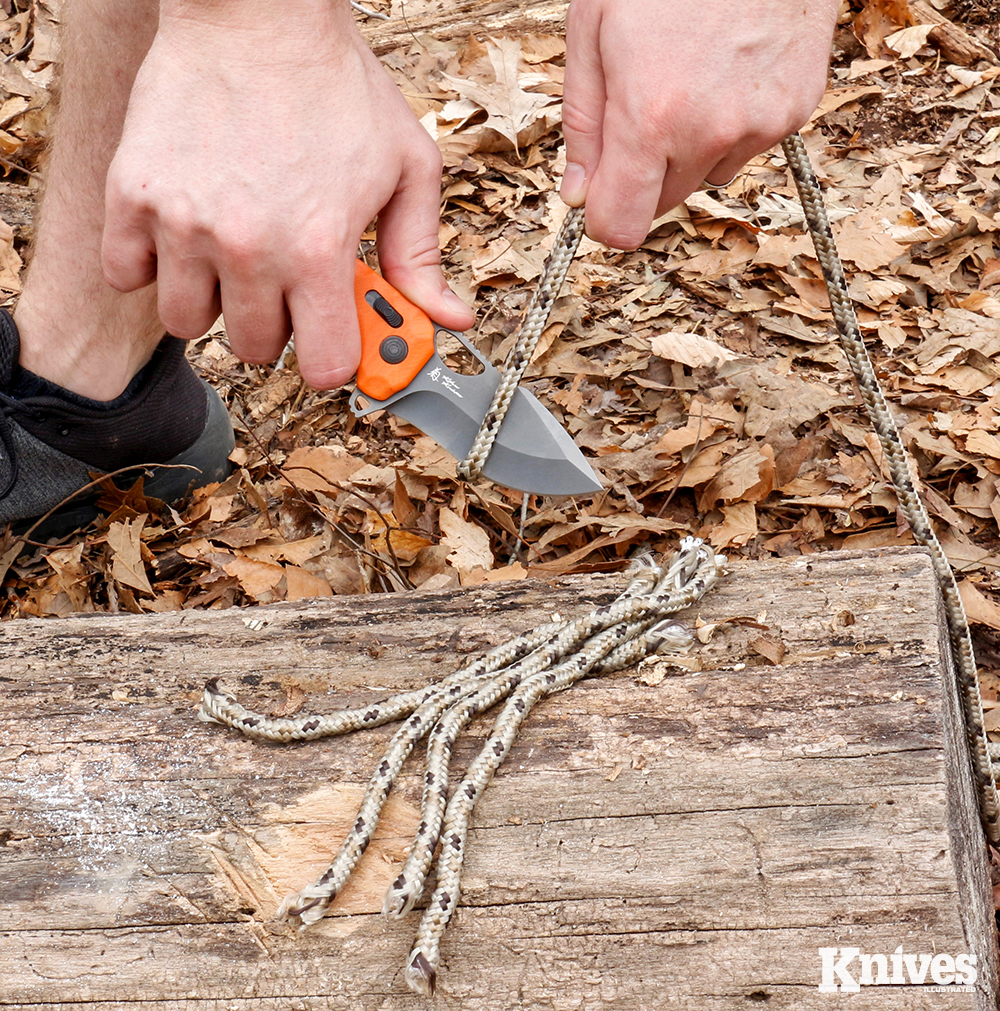 The author put the knife through a number of tests and the Kiku proved to be an excellent all-around performer.

Thankfully, this SOG Kiku is designed so that is very unlikely to happen to you. During my testing of the knife, the blade stayed fully closed in my pocket no matter how vigorous my activity was during the course of my day. I’m an expert at getting poked and nicked by knife blades, but it wasn’t going to happen with the Kiku. It stayed closed until I intentionally activated the flipper with an index finger.

Keeping the blade securely open is SOG’s reliable and powerful XR lock mechanism. SOG says this lock is able to withstand up to 1,500 pounds of force. I had no way to test that claim, but the lock seemed to be solid throughout my work with this knife. It locked into place with a distinctive, convincing click. There was no blade wobble when open.

The nicely curved handle scales are of orange G10. I like a knife to be easy to spot if I set it down. The scales have a series of small scallops top and bottom that help to improve the grip on what is otherwise a rather smooth surface.

For some reason the handle reminds me somewhat of a peanut shell. Don’t get me wrong, I like the look.

“…the shape of the tip is not straight like American tantos, but rather it is curved like the original tips of samurai swords.”

The blade’s flipper becomes a finger guard when the blade is open. And it’s more effective because of the well-defined groove in the handle for the index finger. The carbon fiber liners extend beyond the handle scales at the butt end, forming a nice support for the pinky finger.

There’s a lanyard hole here too, although it’s partially covered on one side by the pocket clip. Jimping on the bottom of the liners and on the back spacer further enhance the grip. 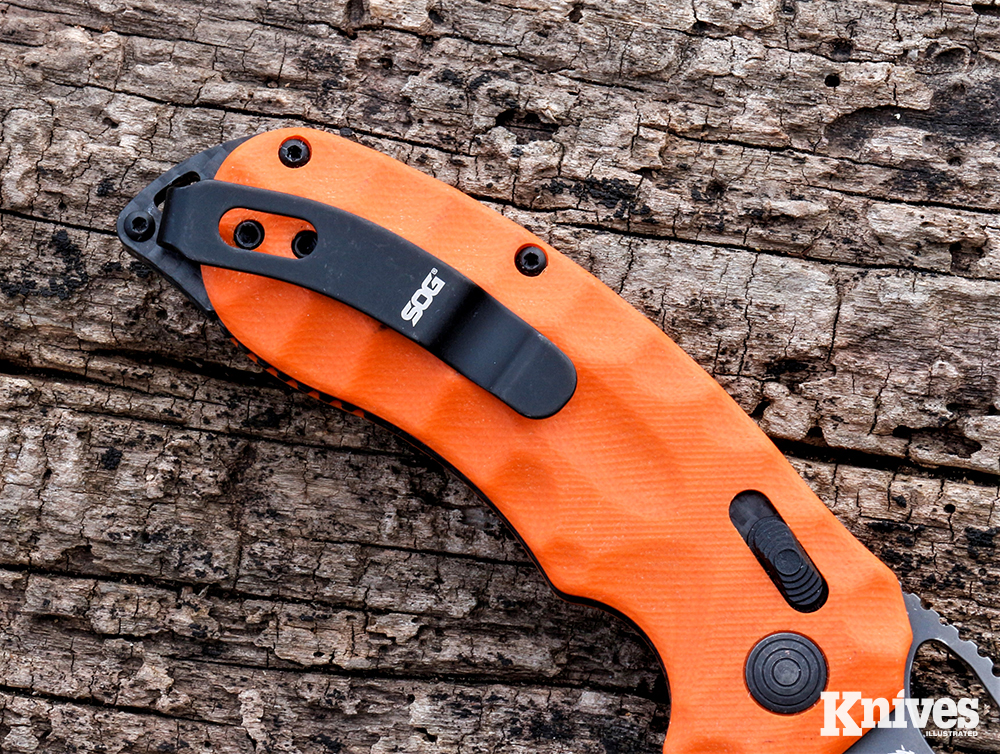 The pocket clip can be configured for either right- or lefthanded tip-up carry.

I’ve been carrying the Kiku XR LTE often since it arrived. Of course, that’s what you do with a knife such as this that’s so well suited to everyday carry. It’s a sharp knife that’s well configured front to back, and it will handle most anything I need a knife to do on a daily basis. It’s easy to carry and fast to deploy.

While it would be right at home in any environment, I’ve chosen it most often when I take to the woods, even if I’m carrying a larger fixed blade knife or chopping tool. Everyone I’ve shown it to has loved it, so much so that I keep a wary eye out so that it won’t mysteriously disappear.