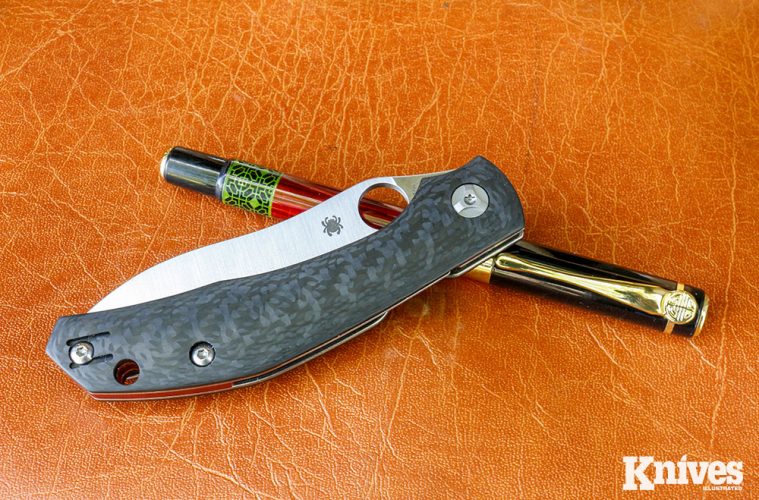 Sometimes the best moments in life occur when you stumble unexpectedly across something wonderful.

That was the case recently when I discovered the Spyderco Kapara. No, finding a Spyderco knife that I love comes as no surprise. There are dozens of them. But this knife was introduced a couple of years ago. It must have crossed my gaze at some point. How did I not take notice of it before?

The Spyderco Kapara is based on the Redback folder design by Australian custom knifemaker Alistair Phillips. Both “Redback” and “Kapara” are names for a particular Australian spider with a distinctive red stripe on the back of its abdomen. While the knife has a skeletonized, open-back handle design for most of its length, there is a distinctive red spacer to help the Spyderco Kapara live up to its name. Putting my personal feelings about spiders aside, I couldn’t wait to grab ahold of the Kapara. 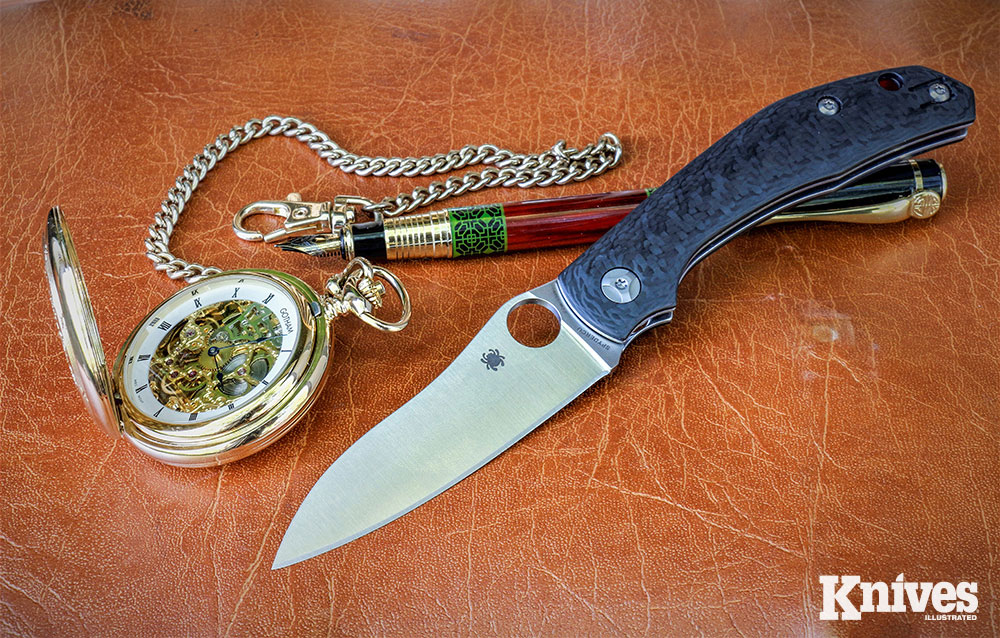 The Spyderco Kapara is a high-end knife that’s ideal for everyday carry.

This knife features a 3.58-inch drop-point blade with a 3.42-inch plain cutting edge with a full, flat grind. The steel is CPM S30V. The blade opens via Spyderco’s Trademark Round Hole, which allows for easy one-handed opening with either hand.

The blade uses Spyderco’s top-mounted Compression Lock with a cutout on the back of the handle so the lock mechanism is easy to reach. I like this lock because when closing it one-handed, it keeps the finger that’s releasing the lock away from the closing blade, unlike liner or frame locks. No, you’re right, that’s not an issue if you’re paying attention to what you’re doing, but we know that doesn’t always happen every time with everyone. (Pay no attention to those little scars on my fingers.)

“The handle configuration of the Spyderco Kapara is one of the best features of the knife and it’s what separates it from so many other models.” 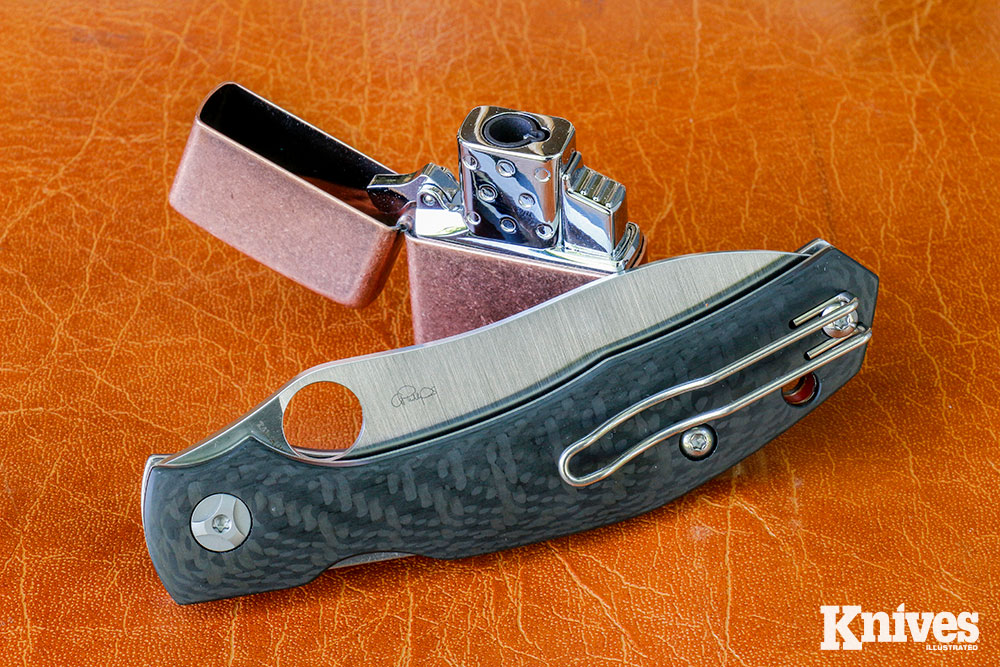 The Kapara is an elegant knife that is now in the author’s carry rotation.

Beauty is in the eyes of the beholder and as I was beholding the Kapara, I liked the way it looked. Over the stainless-steel liners are nicely contoured and precisely fitted gray carbon fiber handle scales with an attractive pattern. Those scales contribute to the Kapara’s light overall weight at just 3.3 ounces, making this mid-sized folder easy to carry.

The knife features what is not so much a blade choil as a forward finger groove on the handle. On taking a normal grip on the knife, your index finger would be behind that groove. But for enhanced control, you can inch up on your grip, put your index finger into the forward groove and get your thumb out over the blade.

The Kapara has a deep-carry wire pocket clip that’s reversible for right- or left-side tip-up carry.

A PLEASURE TO USE

The ease of opening any knife one-handed, whether by button, flipper, thumb studs, or thumb hole, is dependent to a large degree on the configuration of the handle. If you can’t take an immediate, proper grip on the knife, your thumb or index finger might not be in a position to allow the proper mechanics of opening the blade smoothly.

“This particular Spyderco Kapara came with one of the sharpest blades out of the box that I’ve ever used. “

The handle configuration of the Spyderco Kapara is one of the best features of the knife and it’s what separates it from so many other models. My hand takes a natural grip on the knife, positioning my thumb for easy opening of the blade. There’s nothing awkward about it. 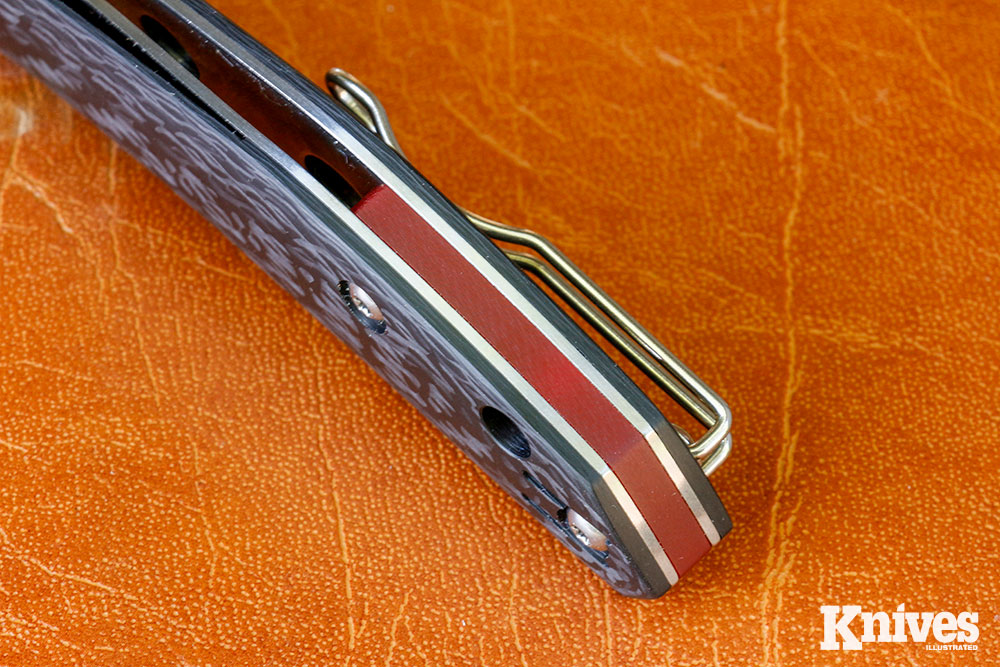 The Kapara’s red spacer is a tribute to the Australian spider from which the knife derives its name.

Once the blade is open, there’s no need to reposition my grip to use the knife. The curve of the handle perfectly follows the contours of my palm. A full, four-fingered grip is the same each time I pick up the knife, thanks to placing the tip of my pinky finger over the lanyard hole, which serves as an indexing point of contact.

And that lanyard hole is large enough, thankfully, to actually put a lanyard through it. That makes this knife a candidate for carry when I’m canoeing or kayaking. 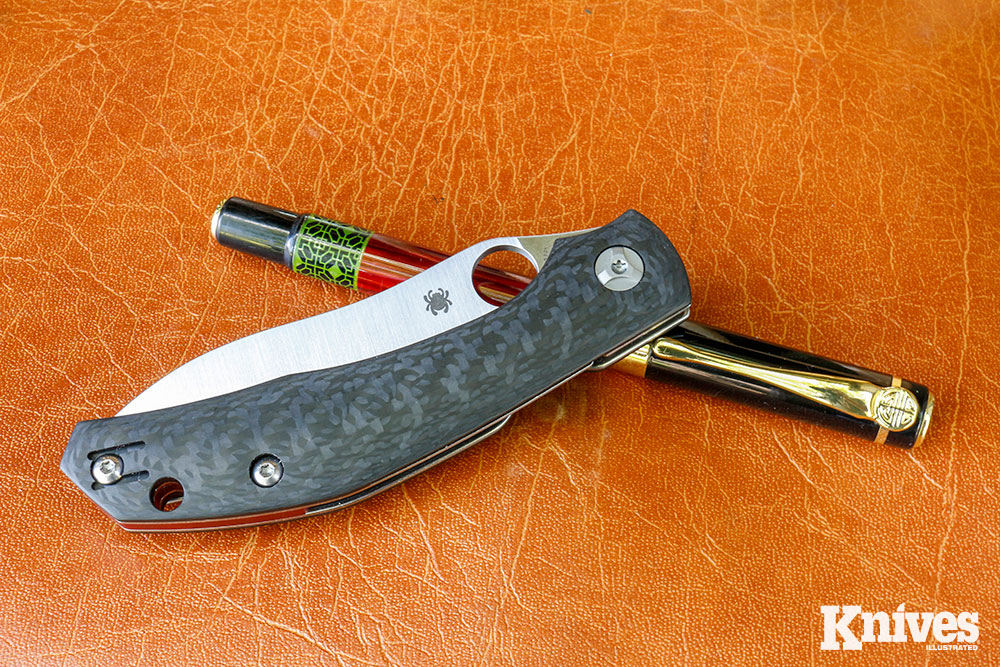 The author found the handle configuration of the Spyderco Kapara to be extremely ergonomic. The handle scales are carbon fiber to keep things light. Closed, the folder measures 4.69 inches. Yet it weighs just 3.3 ounces, making this mid-sized knife a joy to carry.

The rise at the rear of the blade spine above the thumb hole serves as a thumb rest for better control. But that rise is less pronounced than on some other Spyderco models, so if you are not a fan of the Spyderco hump, this knife should please you. For me, it’s not an issue either way. 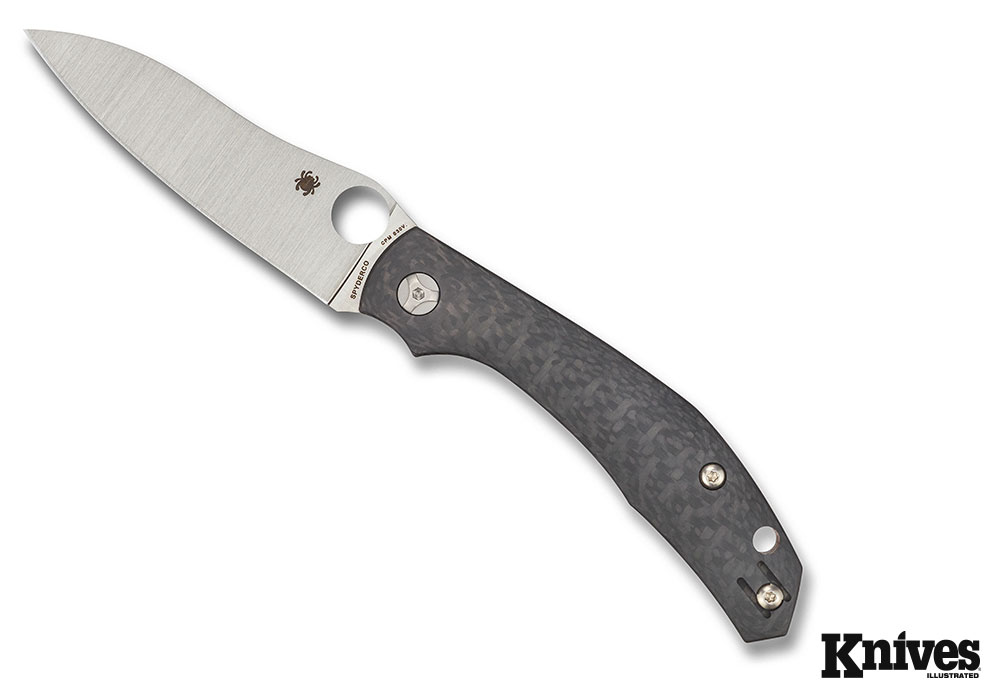 This particular Spyderco Kapara came with one of the sharpest blades out of the box that I’ve ever used. Spyderco says Phillips designed his knife with some food prep as part of its duties. I tried it on all types of material: rope, cardboard, raw carrots, steak, plastic packaging and the Spyderco Kapara was not only very capable, but a pleasure to use.

My first Spyderco was a Delica that I carried on-duty as a police officer for years. Since then, I’ve used Spyderedge serrated and plain-edge versions of it as well as the more corrosion-resistant Salt 2. All have served me well. Whenever I need something bigger, I’m completely happy with an Endura. 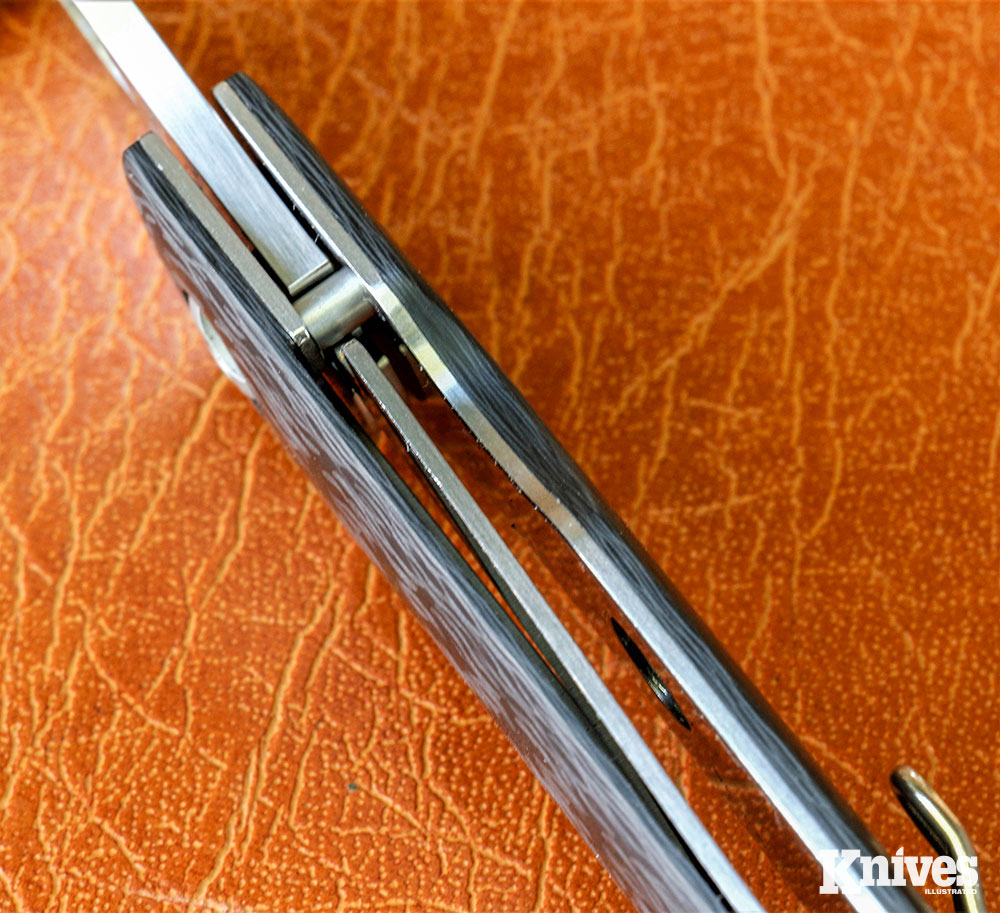 The Spyderco Kapara makes use of Spyderco’s Compression Lock, which clicks in reliably when the blade is opened and is easy to disengage when closing the blade.

The problem is that Spyderco comes up with so many other great knives that I have to have. Some that come to mind are the Bradley Folder 2 and then the Manix 2 and then the Siren.

All of them are among my favorites. And if you ask about the model I’m carrying in my pocket most often these days, I have to admit it’s a Spyderco fixed-blade Enuff for reasons we’ll discuss another time. 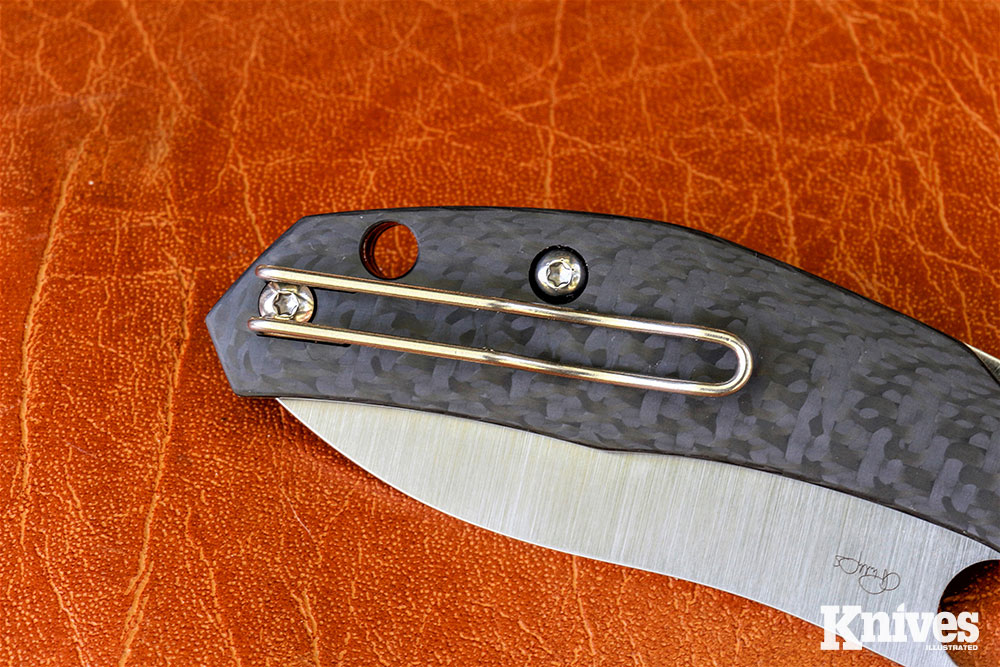 The deep-carry pocket clip is reversible for either right- or left-side tip-up carry.

Now, I’ve added the Spyderco Kapara to my short list of favorites. It is light, super sharp and features, for me, excellent ergonomics in the extreme. Don’t let the list price of $290 put you off. A couple minutes of online searching can start this knife on its way to you for considerably less. I spent too much of my life carrying budget-priced knives of limited quality.

An excellent knife such as the Kapara, with reasonable care, can last several lifetimes. I’m telling you right now, your great grandchildren will love the Spyderco Kapara.