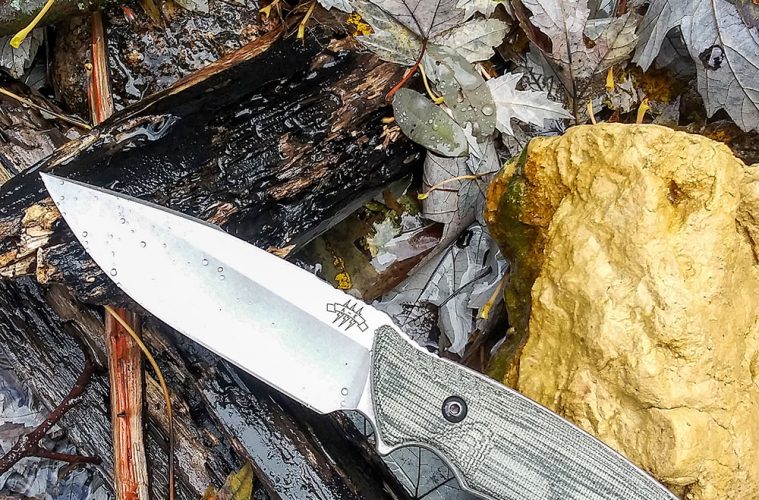 High-quality materials combined with a well-thought-out design add up to a knife that’s built for the long haul. That’s exactly what the makers were after with the Attleboro Knife, and that’s precisely what you’ll find when you open the box. 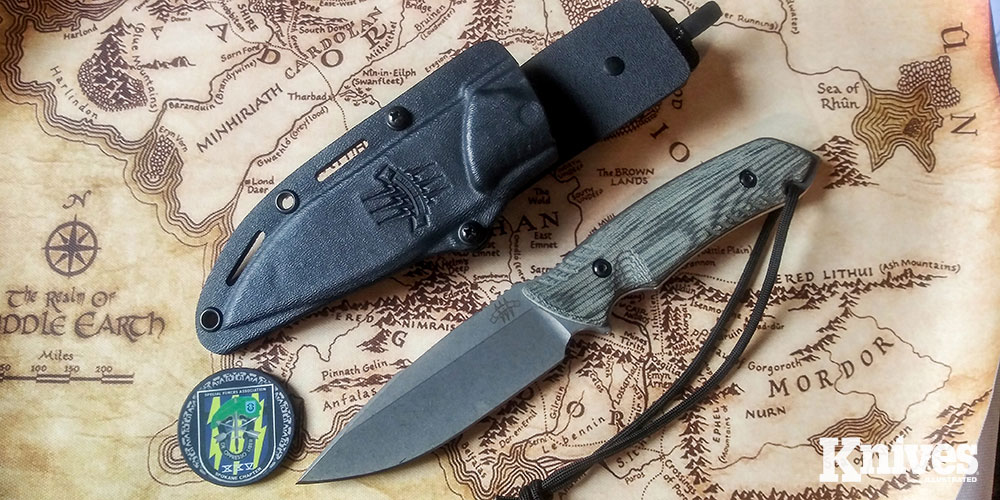 The Attleboro Knife is the signature knife of a company that prides itself on high-quality work.

I was introduced to the Attleboro brand by Jason Thoune from DLT Trading. He’d mentioned that this was a new company with which he was working. He has an incredible eye for high-quality knives, so I’ve learned to pay attention when he mentions new-to-me brands. I checked out the models offered on the DLT website and opted for the flagship blade of the line, the Attleboro Knife.

What’s In a Name?

Every knife shop has a story behind its name. For some, it is simply patterned after the chief knifemaker’s own moniker. For others, though, there was a lot of thought that went into it. 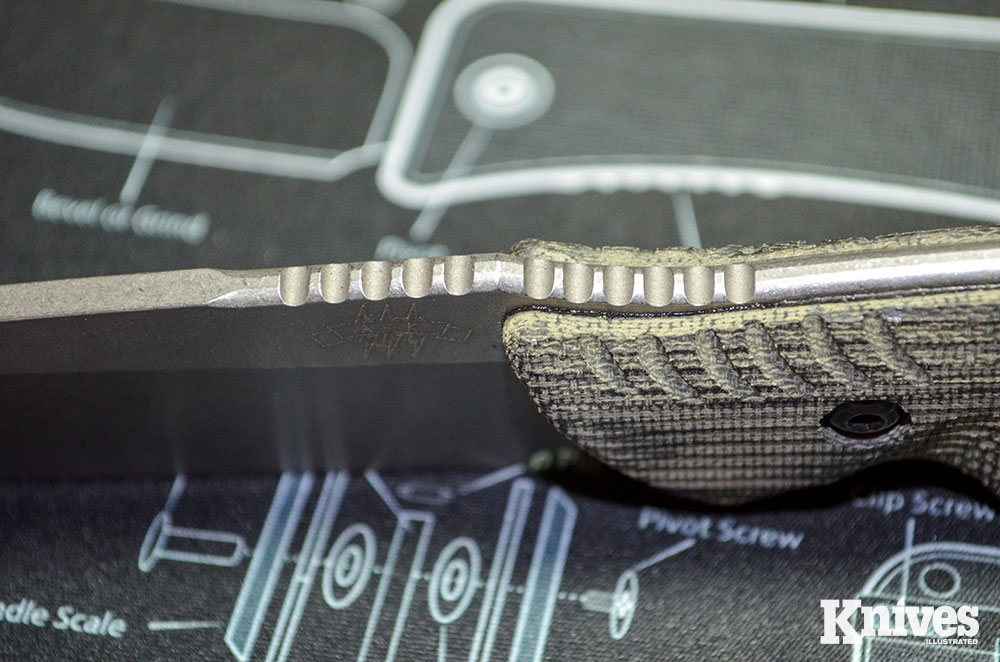 The jimping on the spine bridges the handle to the blade, which works well when you’re choking up on the knife for detail work.

In 1966, the Vietnam War was ramping up. Operation Attleboro, named after Attleboro, Massachusetts, was put into motion to locate and destroy the North Vietnamese Army and Viet Cong resources, as well as enemy units, operating in the Tay Ninh Province. This was just northwest of what is now Ho Chi Minh city, then called Saigon. The operation ran from September to November. 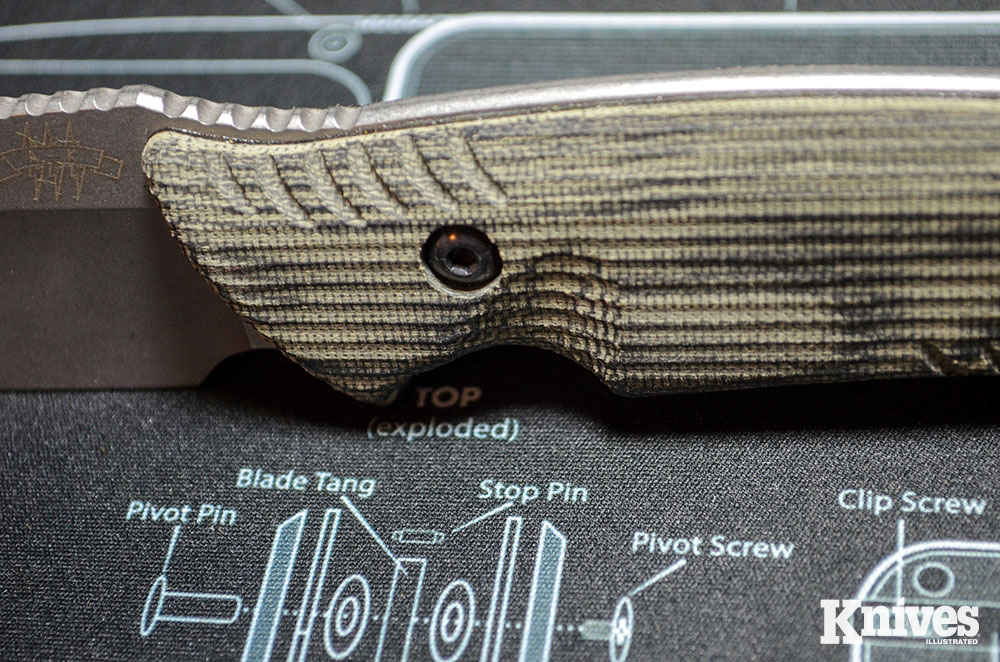 The handle scales have been CNC machined with plenty of contouring, making for a very comfortable grip.

One of the units involved with Operation Attleboro was the Mobile Strike Force Command. It was led by a U.S. Army Special Forces team. A member of that team was Master Sergeant William B. Hunt, father of Attleboro Knives owner Ken Hunt. He saved several lives during the battle but was wounded and then lost. He was declared Missing in Action until 1976, when the Army declared him to be presumed dead. 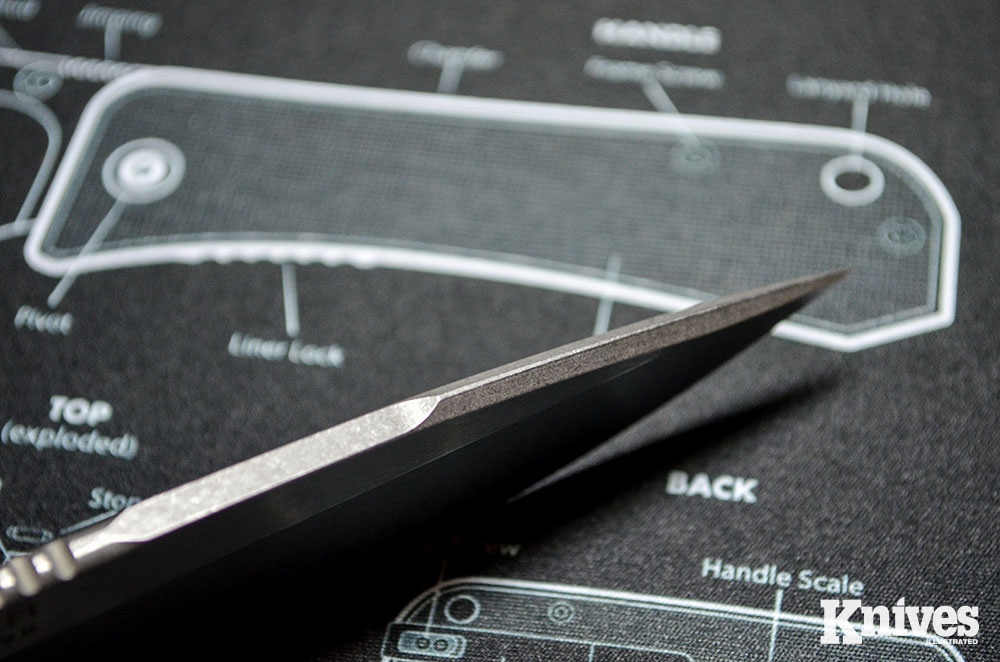 There is an unsharpened swedge, which allows for a piercing point.

It was in honor of MSG William B. Hunt’s sacrifice that the Attleboro derives its name. Continuing with the focus on Special Forces operators, a percentage of the sale of every Attleboro Knife is donated to the Green Beret Foundation.

The knife arrived within a day or so after ordering, as is usually the case with DLT. Sharp mail is the best mail, and I eagerly opened the package to check out the new knife. I’d opted for the stonewashed model, and it is gorgeous.

The first thing I noticed upon drawing the blade from the sheath is how thin it is. At its thickest point on the handle, it is only 0.625 inch thick. However, because the handle is a bit wider than other models in this size, coming in at about 1.25 inches at the widest point, there’s still plenty there for a full grip. I have big hands and wear size large or extra-large gloves, so finding a knife with a comfortable handle is sometimes a struggle. That was very much not the case here. 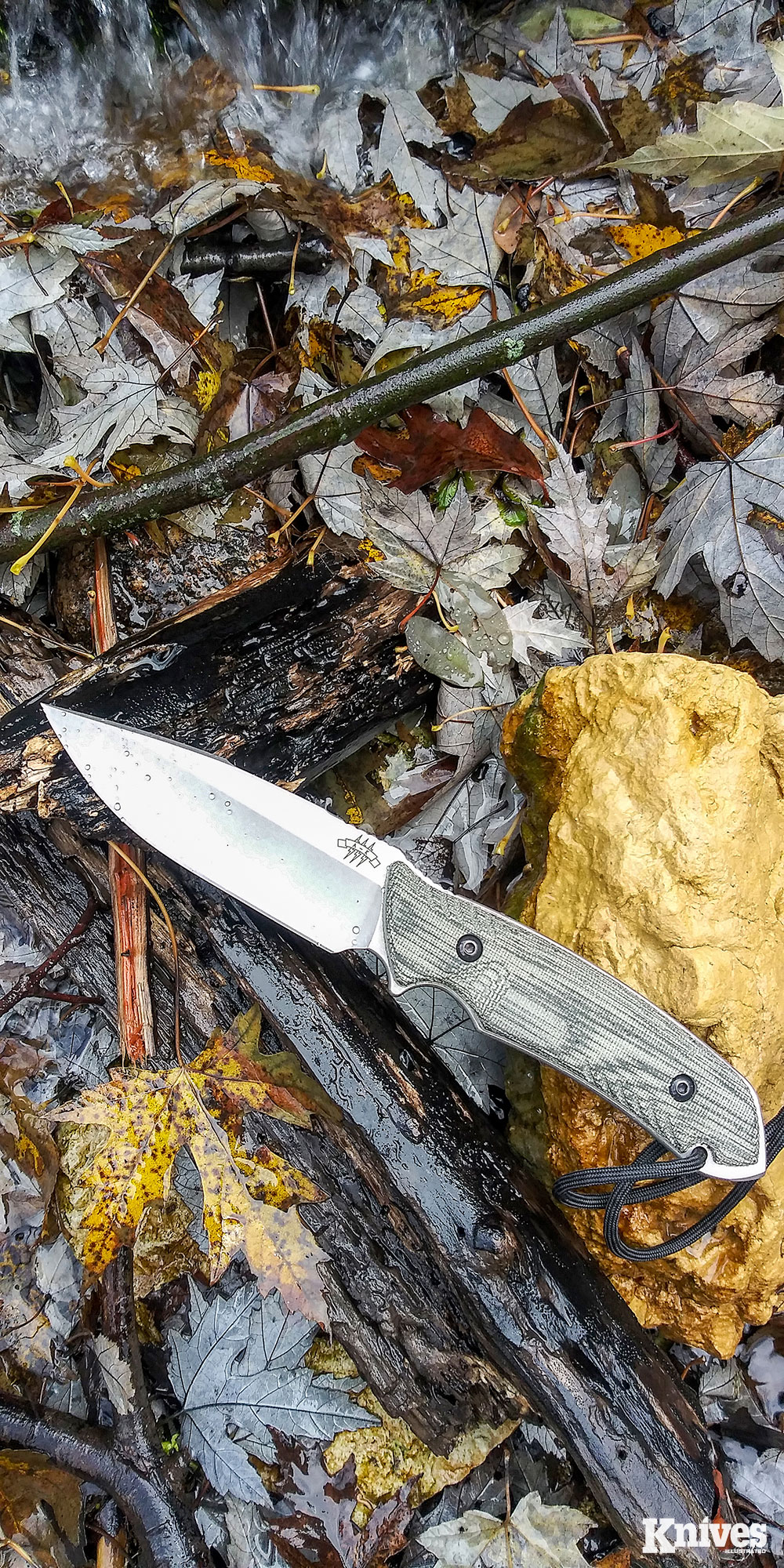 Built for the long haul, the Attleboro Knife is a very capable and comfortable field knife.

The slim handle is also advantageous when it comes to changing grips on the knife. Moving from a standard grip to an edge out reverse grip is smooth and easy.

The scales are Micarta and have been CNC machined to provide a positive grip in all conditions. Texturing runs the length of the handle, along with ridges near the thumb ramp as well as near the base of the handle, right at the third and fourth finger spots. DLT has also worked into the design a groove for the user’s index finger. This is in addition to the finger choil that is just in front of the handle. 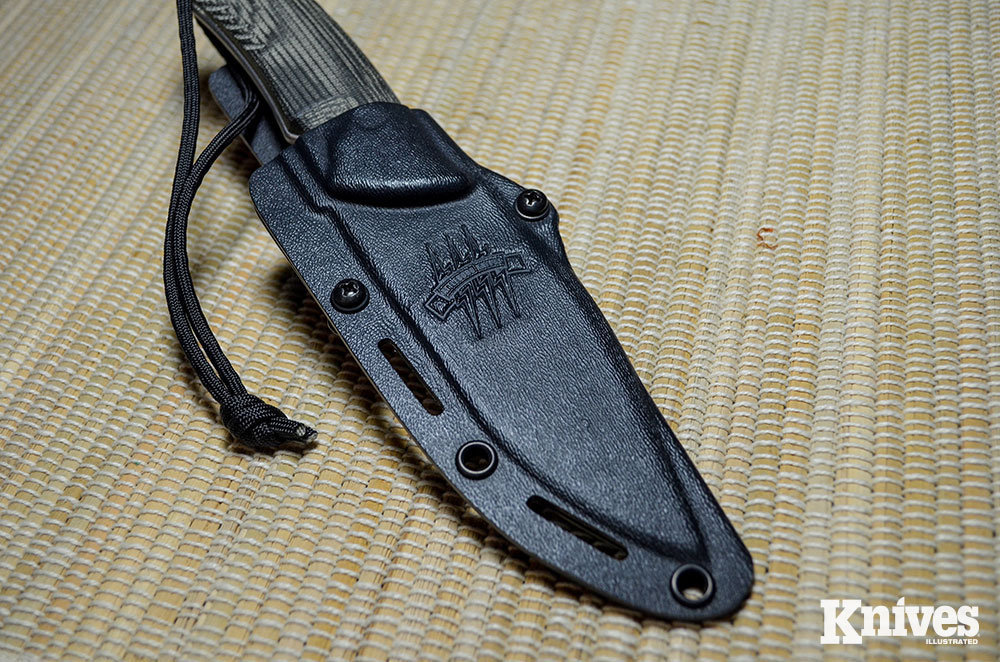 The stock Kydex sheath is durable, naturally, as well as very secure.

At the butt end is a beveled glass breaker. There’s also a lanyard hole just ahead of it, and the knife comes with a paracord lanyard.

The jimping on the spine runs for about 1.5 inches, with half of it at the top of the handle and the rest extending beyond it. This is an interesting design and one that works out very well when you need to choke up a bit on the knife. You rest your index finger in the choil, your middle finger in the groove behind it, and your thumb on the jimping for extraordinary control while you work.

The blade is a drop point design, and it has an unsharpened swedge. The Attleboro has a CNC machined hollow-ground edge that was very sharp right out of the box, with no touching up needed before use. 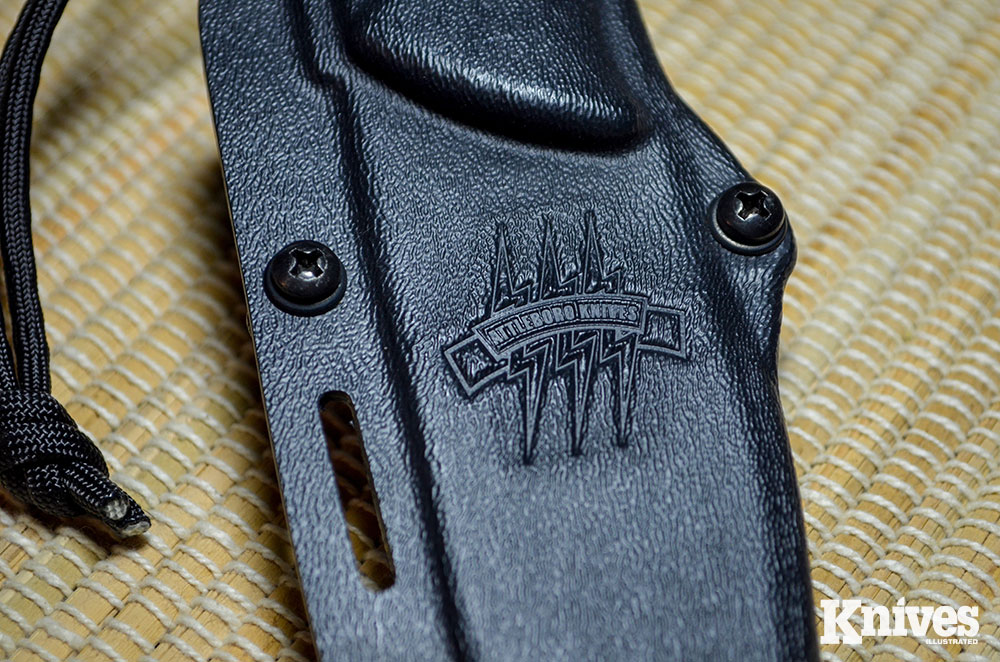 The company stamped its Attleboro Knives logo on the front of the sheath.

The Attleboro Knife comes standard with a Kydex sheath emblazoned with the company’s logo on the front. The belt clip will fit any belt up to 2.25 inches wide. What’s really a nice feature is that the clip is designed such that you can remove the knife from your belt without having to undo the belt. There are two small tabs at the base of the clip. Squeeze them together as you pull on the tab at the top of the clip and the sheath can be removed.

This belt mounting clip, produced by American Sportsmen’s Products, is a great value-added feature to the package. However, one thing I noticed is that there is a little bit of wobble or wiggle between the sheath and the clip. This isn’t a huge drawback and certainly is in no way a deal breaker. But it is noticeable when you remove the knife from the sheath and when you replace it. 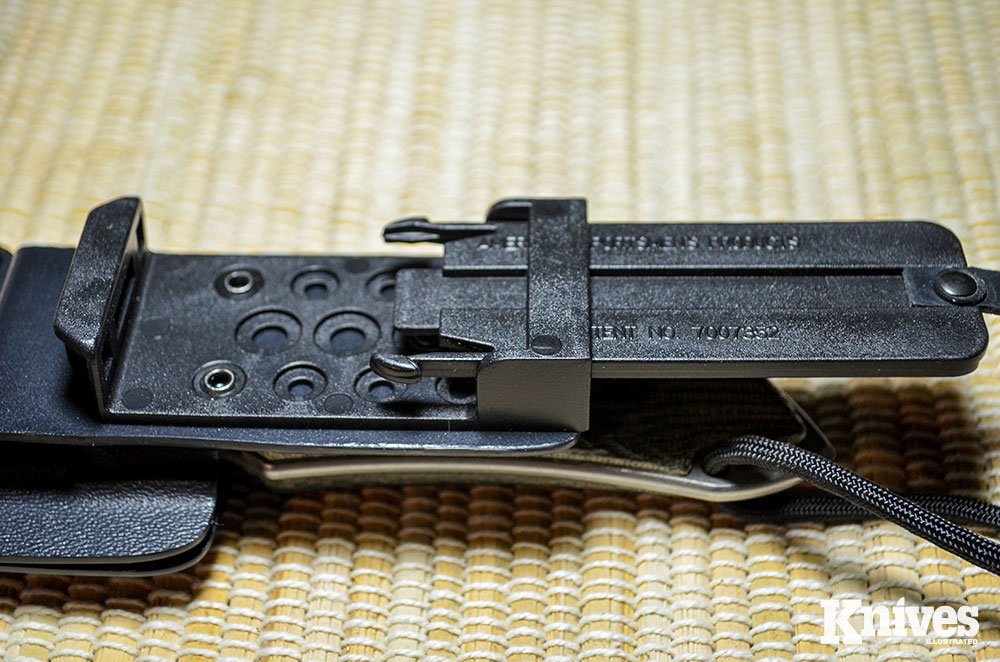 The belt clip is designed such that you can easily remove it from your belt and replace it without having to actually loosen the belt.

Of course, this clip is easily removed from the sheath by means of two Chicago screws. The sheath has a few other attachment points for those who might for some reason want to strap it to a pack or something. The knife is extremely secure in the sheath. I held it upside down and shook it vigorously and the knife never budged.

For those who prefer leather sheaths, you can pick one up from Attleboro as they keep them in stock, in both black and brown. I plan to get one myself as I tend to prefer leather over Kydex. What can I say, I’m a traditional sort of guy. However, the Kydex sheath included with the knife is absolutely spot on and fits well with the tactical or military style of the knife.

I carried the Attleboro Knife off and on for several weeks, when we’d go hiking, as well as working around the house. I used it for whittling and carving, in addition to some light duty brush cutting. Overall, I had no complaints. The fit and finish of the knife are impeccable. The ergonomics are on point, and it is very comfortable to use in a variety of grips. 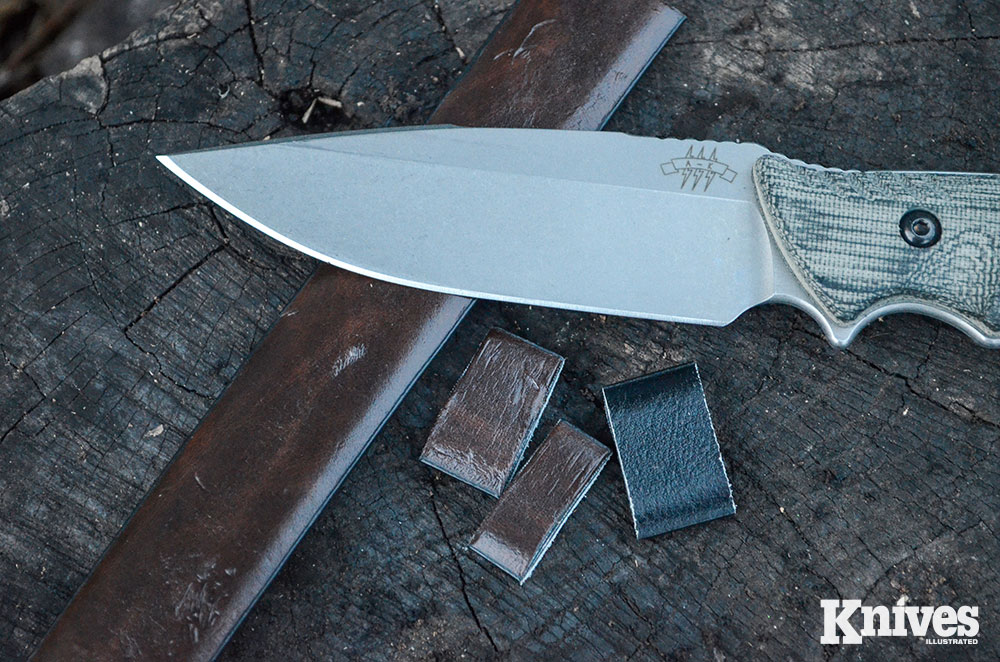 Just two slices with the edge lopped off sections of a thick leather belt.

As is my general practice with knife reviews, I then put it through a few deliberate tests as a means of quantifying the performance. It should be noted that from the time I first opened the box through the end of the review process, I never touched up the edge of the blade. This is intentional, as it gives me a good idea of how the edge holds up under use. Sisal rope was cut into shreds with just a little sawing back and forth with the Attleboro.

I purchased a 3-foot length of this rope several months ago, specifically for knife testing. The material is coarse and not a lot of fun to cut, no matter what you’re using. The Attleboro did well with it, though it required sawing rather than slicing. This wasn’t surprising, and I do not count it as any sort of negative. The fibers parted very nicely with each push of the knife, that’s what counts. The handle thickness is very comparable to a Buck 110.

I keep several old belts around my office to be used for these sorts of reviews. They are generally thick and tough. Applying the Attleboro’s edge to the material, it took just one or two slices to lop off each piece of the belt.

More importantly, even though I applied significant pressure to the knife as I made those cuts, there was no discomfort in the grip. Honestly, that’s the actual test with most of these materials, to see how the knife handles and feels in hand during use. If a knife can’t cut a leather belt with a few passes, that would be reason enough to discontinue the testing process altogether.

Finally, after having used the knife for several weeks and then subjecting it to some tests, I grabbed a hunk of old pine board and began feather sticking. The curls were nice and thin with each slice. No hesitation, no balking, just smooth cuts over and over. This shows just how well the knife holds its edge.

“I love the incredibly comfortable handle. The contouring is just perfect, even when using the knife for long periods of time.” 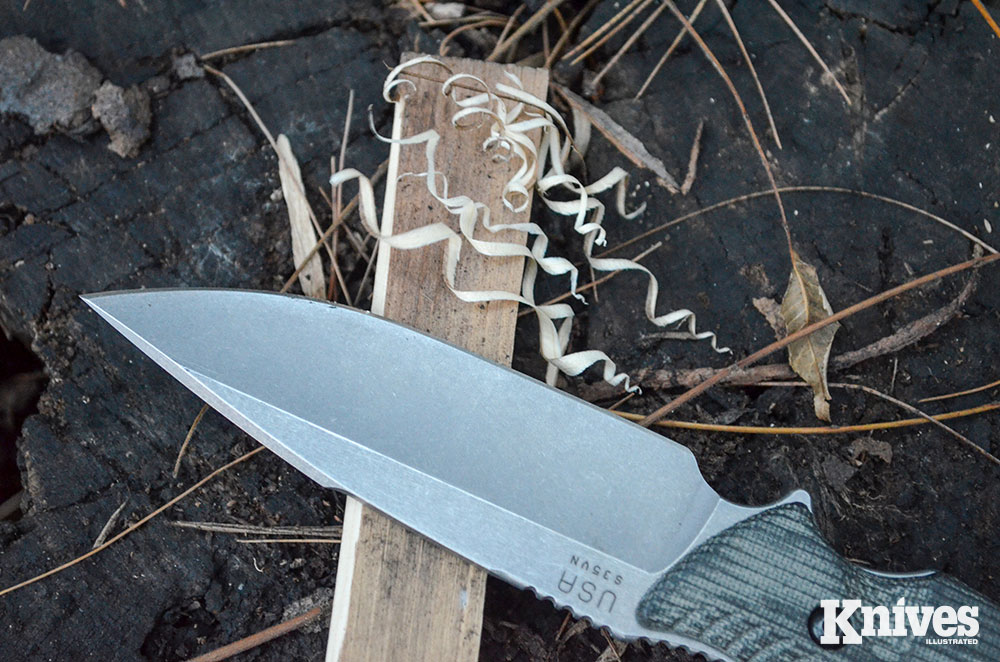 Even after plenty of use, the Attleboro produced fine feather stick curls.

Overall, I’m very impressed with the Attleboro Knife. It has clean lines and a great look. I love the incredibly comfortable handle. The contouring is just perfect, even when using the knife for long periods of time. The blade is thin and between that and the hollow grind, it is a great slicer.

Just as a matter of personal preference, I’ll be picking up a leather sheath for it. But that is not a slight against the stock Kydex one in the least. It is well-designed and holds the knife very securely. If you’re on the hunt for a capable field knife, you’ve found it with the Attleboro.

The Attleboro Knife is available in a few different flavors, so to speak. The one I have has a stonewashed blade finish with a straight edge. You can also find a straight-edge blade with either a graphite black or tan finish, as well as with a partially serrated blade in all three colors.

As for sheaths, the Kydex is available in black or tan. Alternatively, you could go with Boltaron, again in either black or tan. Or for an upcharge you can select black or brown leather. The Kydex or Boltaron sheaths are also available with TekLok or IWB loops as well.