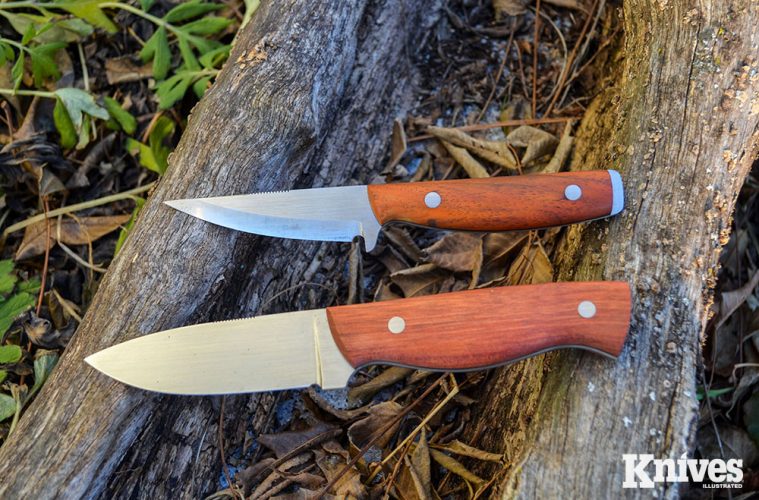 REVIEW: THE BLADES OF BREDSTEIN KNIFE

I was recently introduced to a new-to-me knifemaker. A friend of mine had stumbled on him and his work at a local event. She was so impressed with the knives, she messaged me immediately and asked if I’d be interested in connecting with the guy. She sent me a photo or two of the blades and I told her to put me in touch with him.

From what I could see in the photos, the knife designs looked great and the execution was well done. The sheaths looked good, too. Then, I found out that the guy behind the grinder was still in his teens.

Shlomo Bredstein just turned 16 years old. He’s been making knives since he was 13, catching the bug after seeing a video about the process. Having spent countless hours in the garage helping his father with various and sundry projects, he was already well-experienced working with his hands.

For his first effort, he scrounged up a piece of scrap steel and then found some oak wood to use for the handle. Shlomo made a dugout forge and used charcoal to heat the steel. Then, using nothing more elaborate than a hacksaw, some files, and his dad’s drill press, he spent a month making a knife, researching each step along the way.

Shlomo learned a lot with that first knife and he’s been improving his skills ever since. Over time, he began making knives for friends and used the profits earned to invest in better equipment. Today, he has a nicer drill press, along with an electric kiln, a belt grinder, and more.

He told me that he’s mostly self-taught, though his dad gave him a solid education on tool usage. He’s had a ton of help from other makers online, though, and he specifically mentioned Aaron Gough from Gough Custom (GoughCustom.com) as someone he looks up to quite a bit.

I asked him if he favored any specific materials and he said that he really likes working with A2. That’s the steel you’ll find in all of the knives in his current product line. Shlomo also tends to favor natural materials rather than synthetics, though he confesses that some manufactured materials do perform better in certain applications. Overall, though, he likes to use wood for handle scales.

He sent me two knives as representative of his products, the Fledgling and the Bushcrafter. I used them both off and on over the course of a few weeks, carrying them with me when I’d go out into the field as well as when I was working around the house.

This is a very sharp and pointy knife, perfect for detail work. It has a Scandi grind, which I don’t tend to like as much as a flat grind, but it works very well with this knife. The handle scales are cocobolo with black G10 liners. This combination is very handsome, and this is a great looking knife overall.

“Shlomo Bredstein is definitely a maker to watch, as he’s just getting warmed up.” 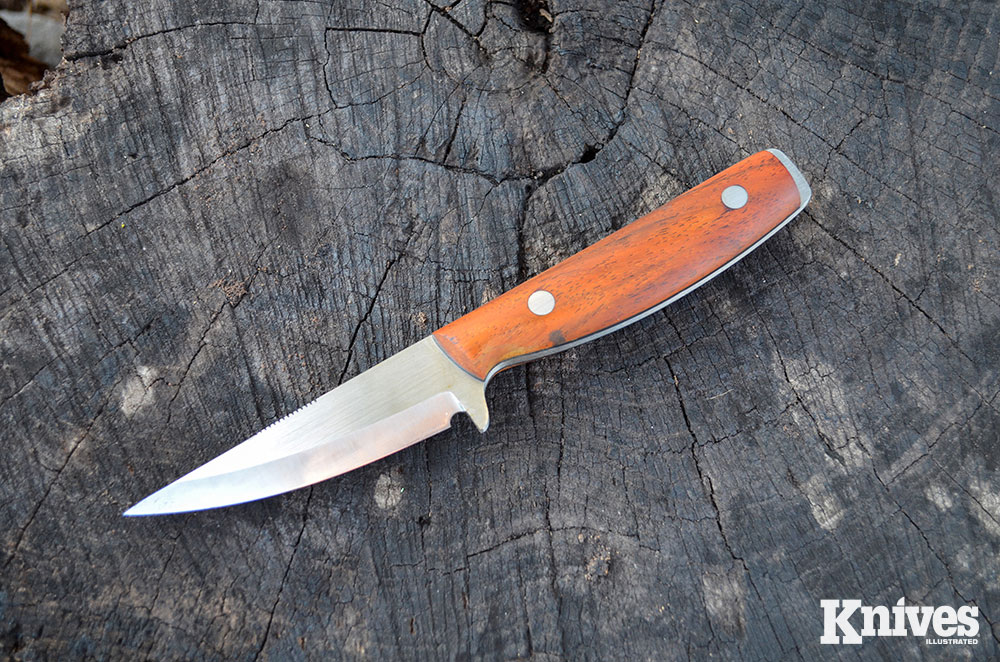 The Fledgling has a Scandi grind and a needle point, great for detail work.

There’s a bit of jimping on the spine, falling roughly halfway between the handle and the blade tip. Speaking of the spine, the precise 90-degree angle found there rivals anything that has come out of L.T. Wright’s shop. If you know, you know. 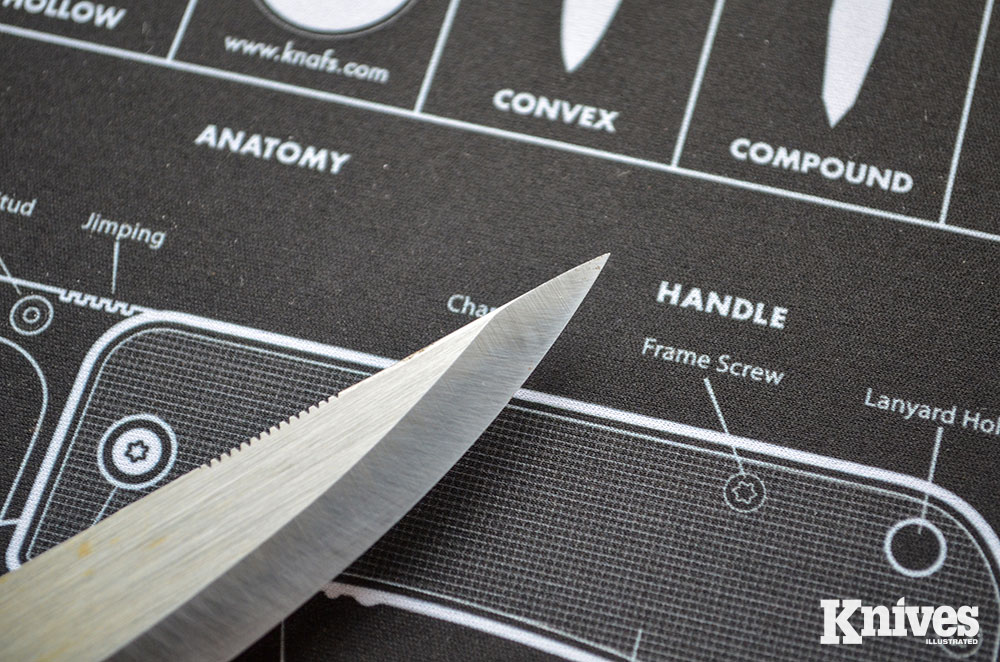 The point on the Fledgling is sharp but very strong as there’s plenty of steel behind it.

There is some rounding and shaping on the handle scales, which gives it great ergonomics. The steel is 0.125 inch thick, which means that even with the Scandi grind, it is still a pretty good slicer. The knife arrived hair-splitting sharp, too. The point on the Fledgling is like a needle, albeit a strong one. 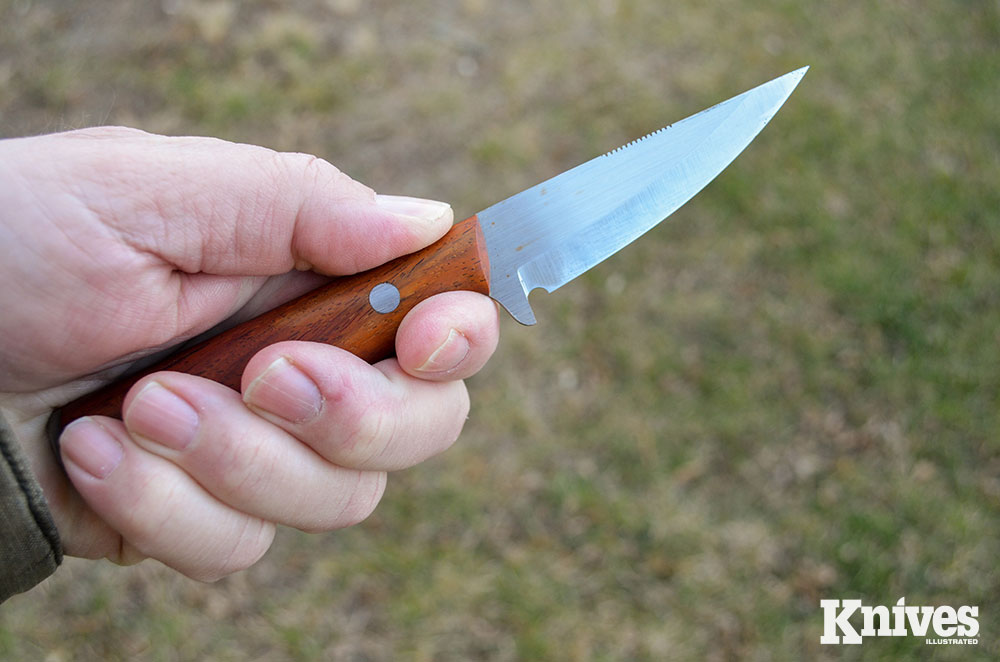 The Fledgling is a smaller fixed blade, but there’s still plenty of handle for a solid grip.

It comes with a sturdy, stiff leather sheath that’s also handmade by Shlomo. It is a pouch style, with a loop that will accommodate a fairly wide belt.

The Fledgling is a great size for an EDC (everyday carry) knife. It is a bit over 7 inches from end to end, with a blade running 3.375 inches. It weighs just a little over 3 ounces, so it is light enough for daily carry without bogging you down. 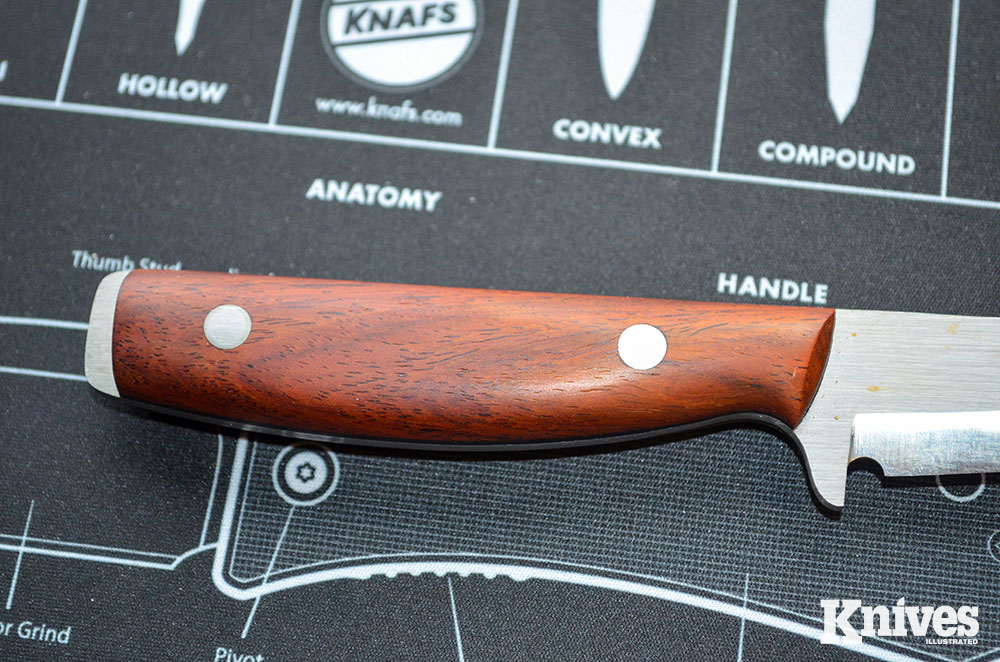 Cocobolo is an excellent wood for knife handles as it is naturally somewhat water-resistant. It is also very handsome.

Because it rides fairly deep, and thus secure, in the pocket sheath, I’d love to see the addition of a lanyard hole. A lanyard would work well to give you a little added leverage when drawing the knife. 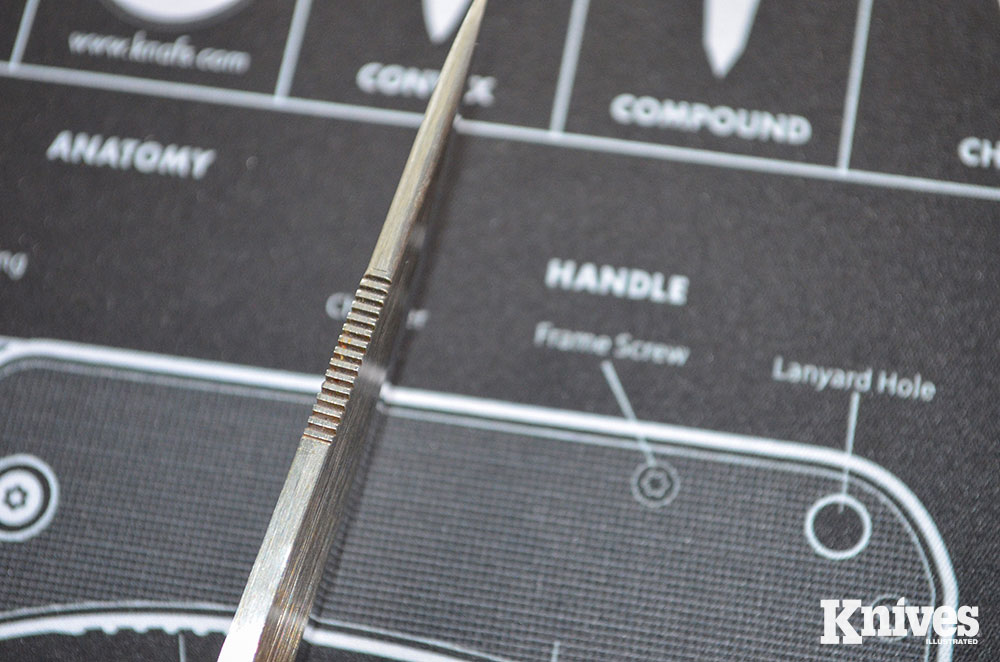 The jimping on the Fledgling isn’t overly aggressive but provides good traction.

The only real strike against the Fledgling, and I found this to be true of the Bushcrafter as well, is that the sharpness of the spine is also present on the integral finger guards on both knives.

My own preference is to have those edges rounded or radiused, so they don’t scrape against your fingers while you’re working. This isn’t a deal breaker for me. A few minutes in the shop would take care of it quite easily. But, it is something worth noting for future improvements of the knife designs.

As with the Fledgling, the Bushcrafter came out of the box incredibly sharp and ready for work. For a general-use fixed blade, this model ticks a lot of boxes for me. The size is great, for starters. The blade runs 3.75 inches, which is plenty of steel for the vast majority of common tasks at home or on the trail.

The high flat grind is great for slicing. The handle allows for a solid four-finger grip, even for my large hands. The handle is the classic “Coke bottle” shape, making it very comfortable to hold and use.

“As with the Fledgling, the Bushcrafter came out of the box incredibly sharp and ready for work.” 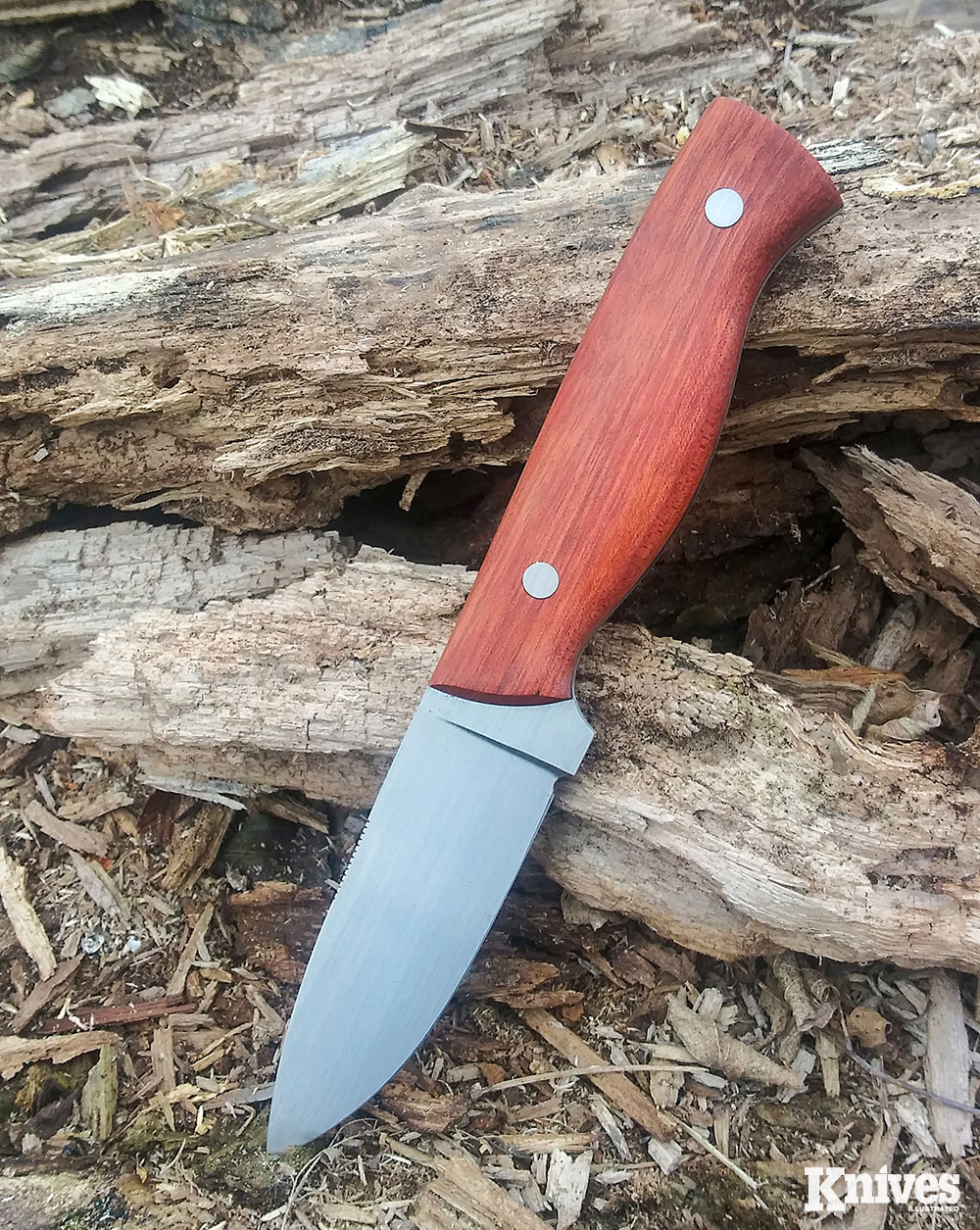 The Bushcrafter is right at home in the outdoors, providing you with a solid, dependable tool.

The drop-point profile is a proven winner for an outdoor knife. At the tallest point near the handle, the blade measures 1.375 inches wide. The spine has about 0.75 inch of jimping, just deep enough for traction without being obnoxious. The spine is as sharp as they come, too. 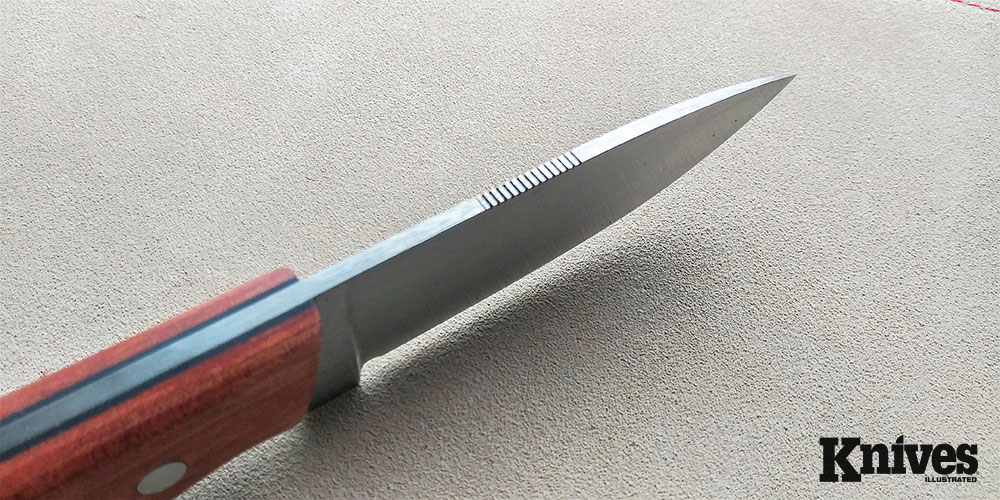 At 0.375 inch thick, there’s enough steel there to do the job without being a sharpened crowbar on your belt.

The scales on the Bushcrafter are bloodwood with black G10 liners. Bloodwood, as the name would suggest, has a reddish hue to it, one that will slightly darken with age. The wood has been sanded very smooth, which could lead to concerns about grip security, but because of the contouring of the handle, this isn’t much of an issue at all.

That said, I do prefer a little bit of traction on the handle material for knives I intend to use outdoors or in the kitchen, both being places where my hands or the knife itself is likely to get wet. 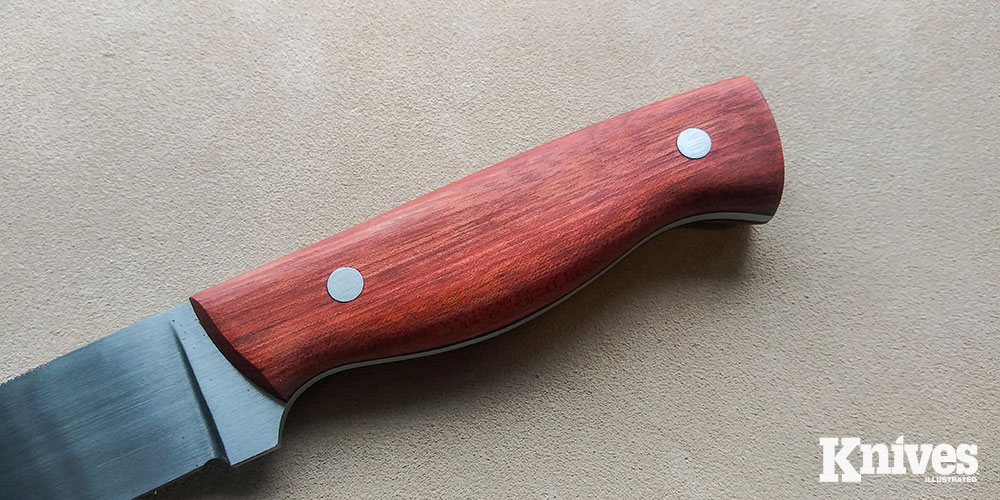 Bloodwood is a great looking material for knives, as well as being dense and straight-grained, thus able to withstand hard use. The integral finger guard on both knives could use just a few minutes of sanding or grinding to break the edges a touch.

While there’s enough handle real estate exposed outside the leather sheath to allow for easy removal of the knife, the addition of a lanyard hole wouldn’t be a bad idea. Many users like to adorn their knives with lanyards, whether for utilitarian or purely decorative purposes. Either way, it certainly wouldn’t detract from the knife’s appearance or its practicality.

I used both knives for a variety of tasks through the course of a month or so before sitting down to do this review. Whether it was cutting cordage, doing some food prep in the kitchen, opening packages, or breaking down boxes, they both performed very well.

As I often say, when we review knives like these, we’re not so much concerned about whether the knife will cut a given material, but rather how the knife feels in the hand while doing so. 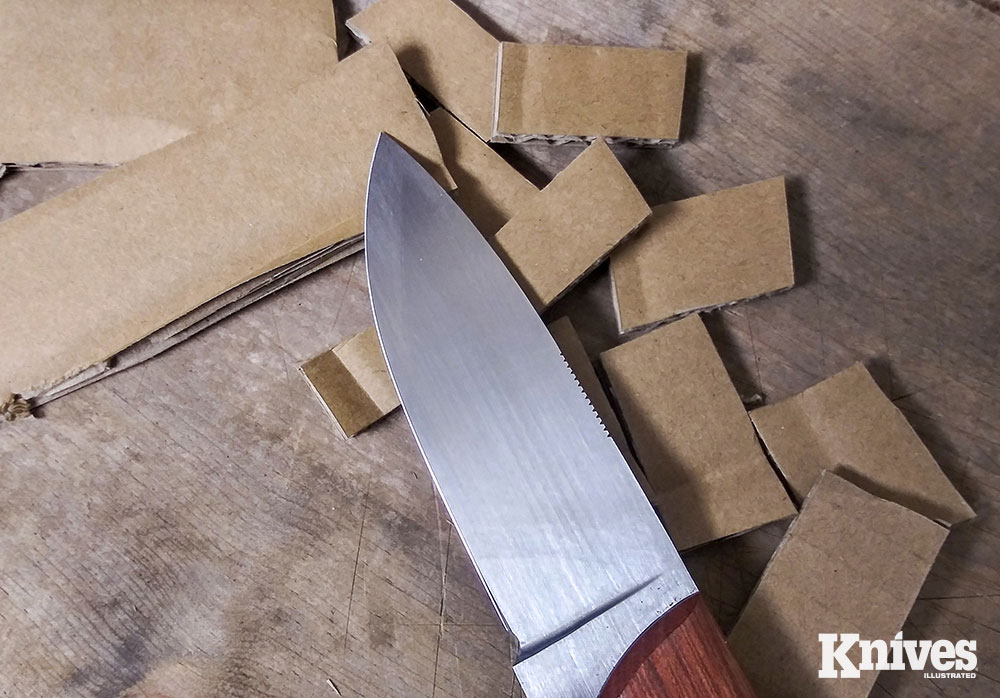 From long slices to push cuts, the Bushcrafter had no problem at all getting through mounds of cardboard. The Fledgling worked extremely well with leather, including boring several holes with the needle-sharp point.

I tend to favor the Bushcrafter over the Fledgling, all other things being equal. It is a bit larger and thus fits my hand better. However, the Fledgling is no slouch. The needle point works well as an awl, such as putting new holes in a leather belt. Whether that belt was too small or too large is none of your concern. 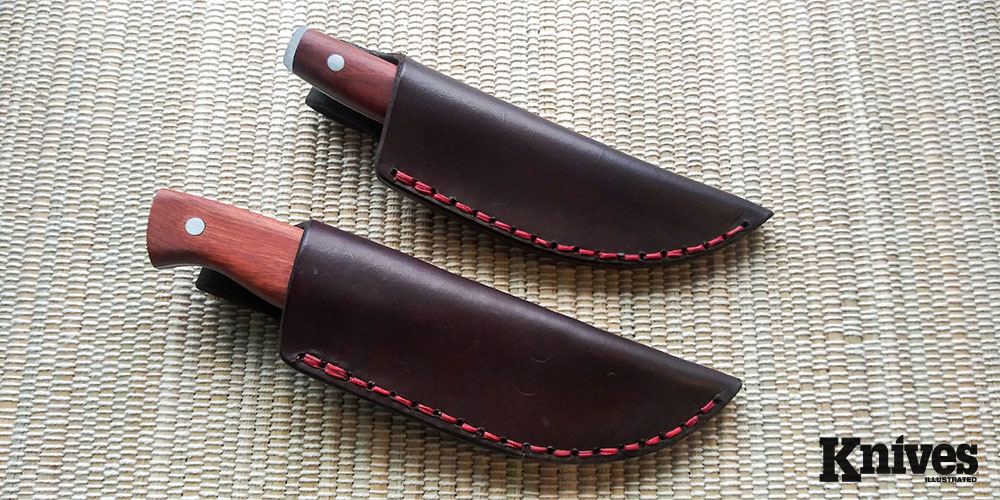 Both knives come with sturdy leather sheaths made by the knifemaker

At the end of the day, these are well-made knives, suitable for real world use and abuse. The sheaths are sturdy as well, and ready for action. Shlomo Bredstein is definitely a maker to watch, as he’s just getting warmed up.

For those in the know, the spine of a knife is as much of a tool as the blade’s edge. You can use it to process tinder from natural sources, such as scraping the dry inner bark or wood of a dead branch. You can also use it to generate sparks from a ferrocerium rod, turning that tinder into flame that then feeds on the kindling.

It is difficult to do those things with a dulled or rounded knife spine. However, there’s something to be said for ergonomics when using a knife. If the spine is too sharp, it might not be comfortable to use when making certain kinds of cuts. For example, if you’re carving and needing to use your thumb to put pressure on the spine, it might not be a fun time after a while.

There are a couple of workarounds for those who want the best of both worlds. One approach is to dull the spine edges a bit, but leaving them intact in a certain section. For example, break the edges where your thumb normally resides when you’re working the knife, but leave the edges in place elsewhere so you can use the spine for tinder processing and what not.

Another solution is to wear gloves when using the knife, which if we’re being honest, most of us should probably do more often anyway.